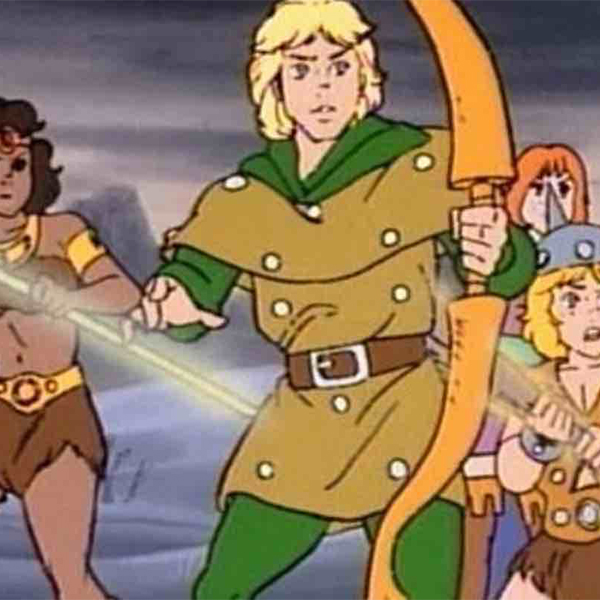 While Dungeons and Dragons was the most celebrated role-playing game to emerge in the late 70s/early 80s, many still associate the title primarily with the cartoon the game inspired. First hitting screens in 1983, the series captured the imaginations of kids everywhere.

Tie-in cartoons based on existing properties were commonplace in the 80s, but Dungeons and Dragons was unusual for how loosely it was connected to the source material. Never directly referencing the game, the cartoon finds six young friends transported to a world of sword and sorcery by an enchanted fairground ride.

Here, the six of them take on the form of various heroic archetypes, and under the guidance of the enigmatic Dungeon Master, they must embark on adventures in this strange new world – often coming into conflict with the villainous Venger – in the hopes of finding their way back home.

Dungeons and Dragons was co-produced by Marvel. It sported an impressive cast including noted cartoon voice actors Peter Cullen and Frank Welker, plus Don Most (Ralph from Happy Days) as the grumpy Eric.

The game was controversial at the time over fears that it was corrupting the young, and unsurprisingly the cartoon also attracted its share of controversy, with complaints that it was too violent and sinister for children.

After 27 episodes, Dungeons and Dragons was cancelled unexpectedly early in 1985, with its story left unresolved. A script was written for a series finale that finally took the kids back home, but this episode was never made.

10 Marvel Cartoons That Will Take You Back To Your Childhood