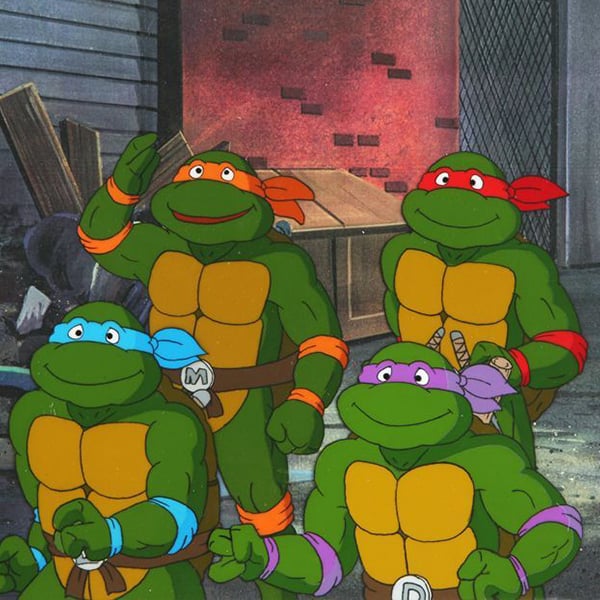 It has one of the weirdest, silliest concepts imaginable, yet Teenage Mutant Ninja Turtles is one of the most enduring franchises to emerge from the 80s. After starting life as an independent comic book, the Heroes in Half-Shell first made it to TV screens in 1987. As was common at the time, this tied in with the launch of a toy line.

Four turtles, pets of Hamato Yoshi – an exiled Japanese ninja living in New York - are transformed into intelligent humanoids by a mysterious toxic ooze, which also transforms Yoshi into a humanoid rat. Taking the name Splinter, Yoshi names the turtles after his favourite Renaissance painters – Leonardo, Michelangelo, Donatello and Raphael – and trains them in Ninjutsu. This training proves vital as Yoshi’s old enemy The Shredder comes to New York, in alliance with the technologically advanced alien Krang.

Although the Teenage Mutant Ninja Turtles cartoon was considerably lighter in tone than Kevin Eastman and Peter Laird’s gritty and gruesome comic book, the show still proved controversial for promoting martial arts-based violence to kids. When first aired in the UK and some European countries, it was renamed Teenage Mutant Hero Turtles, and episodes were re-edited to reduce the emphasis on their central quartet's weapons, as well as removing any use of the word 'ninja.'

This controversy did nothing to impede the audience appetite for all things Turtle. The initial series ran all the way to 1996, by which time 196 episodes had been made. A live-action series and three further cartoon shows followed, as well as five live-action movies and an animated feature.

Watch: ‘Middle-Aged Mutant Ninja Turtles’ Cartoon Imagines The Heroes In A Half Shell Getting Old

23 Cartoon Characters Then Vs Now