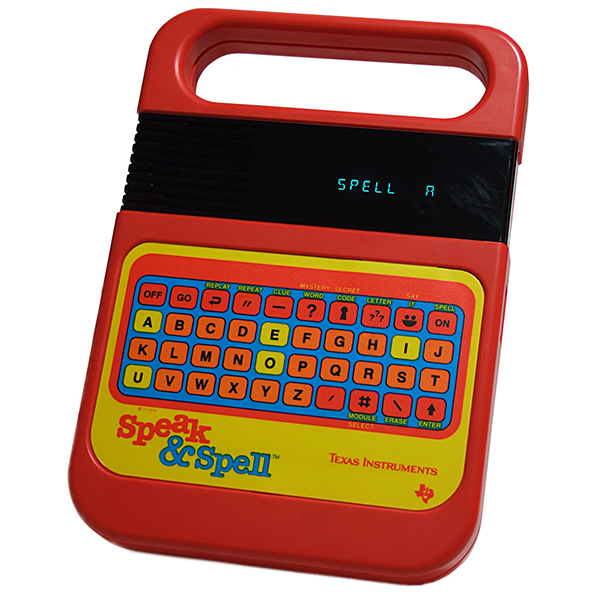 A child's computer designed by Texas Instruments, the Speak & Spell marked a watershed moment in the use of speech-synthesising technology for educational purposes.

Development of the Speak & Spell began in 1976, at which point it became the first educational toy to use speech that was not recorded on tape or phonographic record. Gameplay consists of users being asked to spell a word based on a sound generated by the device. There are also several mini-games, ranging from a version of Hangman to a decryption task.

Over the course of the 80s, several additional cartridges were produced, each containing digitised speech. This greatly extended the lifetime of the devices, meaning several redesigns were necessary to drive further purchases.

One such redesign, in 1980, replaced buttons with a touch-sensitive membrane keyboard, which would quickly become the standard for such toys. The release of the 1989 Super Speak & Spell protected against backwards compatibility for the cartridges, meaning entirely new systems and cartridge libraries needed to be purchased.

The Speak & Spell has had a healthy legacy as a musical instrument, with its digitised speech being employed in songs by artists such as Beck, Robyn and Coldplay. Depeche Mode released an album in 1981 with the name Speak & Spell.

The device has also featured in several films, such as ET the Extra-Terrestrial, Poltergeist III, and - of course - the Toy Story franchise.

12 Amazing Gadgets That Will Transport You Back To Your Childhood

14 Pieces Of Technology All 80s Kids Will Remember