Freddy vs Jason vs Ash: The Best Crossover Movie Never Made

When Freddy vs. Jason brought together the iconic anti-heroes of A Nightmare on Elm Street and Friday the 13th, the results were box office gold. When the 2003 slasher showdown proved the biggest hit of either franchise, studio New Line Cinema naturally wanted a sequel – and the only logical step forward was to bring in another 80s horror icon to battle Freddy and Jason.

The studio’s new combatant of choice was Ashley J Williams, the chainsaw-handed hero of the Evil Dead movies. Sadly for horror fans, Freddy vs Jason vs Ash never happened, as Ash’s creators (actor Bruce Campbell, director Sam Raimi and producer Rob Tapert) were unwilling to give up control of their baby – and New Line would not concede to their demand that Ash should win the fight. 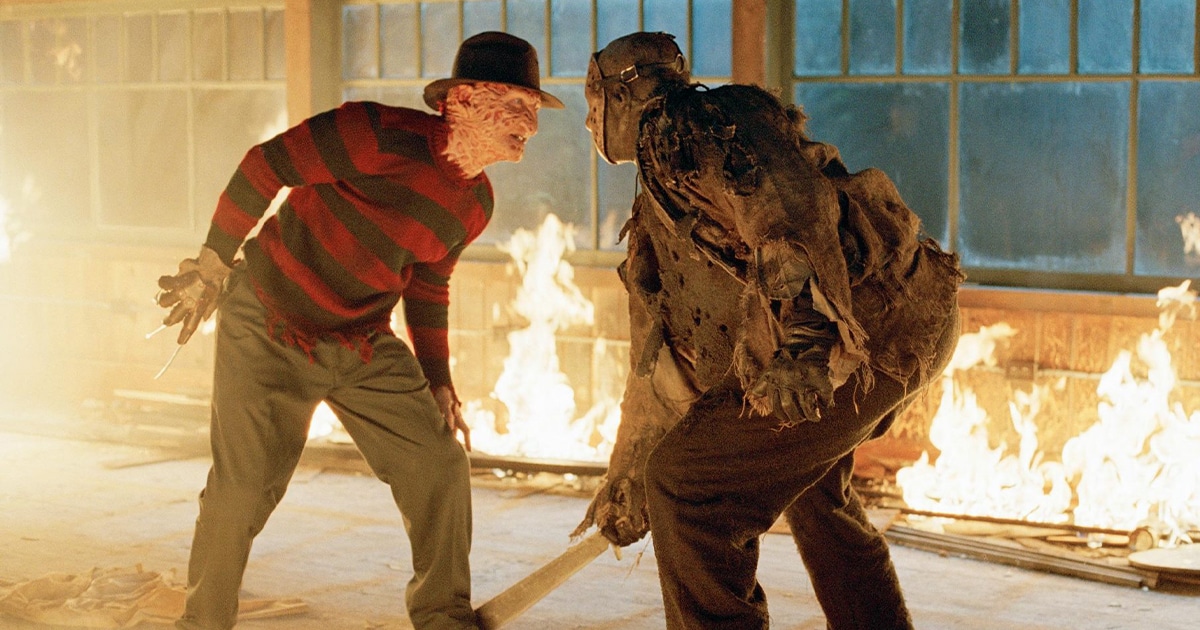 Ever since the mid-80s, horror fans had been debating who would win in a fight between the machete-wielding, hockey mask-clad Jason Voorhees and the scarred, razor-gloved Freddy Krueger. The decade saw Friday the 13th and A Nightmare on Elm Street battle for box office dominance, though Freddy was clearly winning: 1987’s A Nightmare on Elm Street 3: Dream Warriors earned almost $45 million in the US, more than 1985’s Friday the 13th: A New Beginning and 1986’s Friday the 13th Part VI: Jason Lives put together.

A crossover movie was first proposed by Freddy’s studio Paramount in 1987, soon after Dream Warriors hit big, but it would be Nightmare on Elm Street’s studio New Line Cinema who pursued the idea, purchasing the rights to Friday the 13th in the early 90s once the series fell dormant at Paramount. After killing off Krueger with 1992’s Freddy’s Dead: The Final Nightmare, New Line did the same thing to Voorhees with 1993’s Jason Goes to Hell: The Final Friday.

It might have seemed odd for New Line to kill Jason off immediately after buying the rights to him, but Jason Goes to Hell’s closing moments made the intent clear: as Jason’s hockey mask lies vacant on the ground, Freddy’s glove suddenly bursts up through the earth to drag it under. The stage was set for Freddy vs. Jason –  but observant viewers noticed that Jason Goes to Hell also hinted at yet another horror crossover. 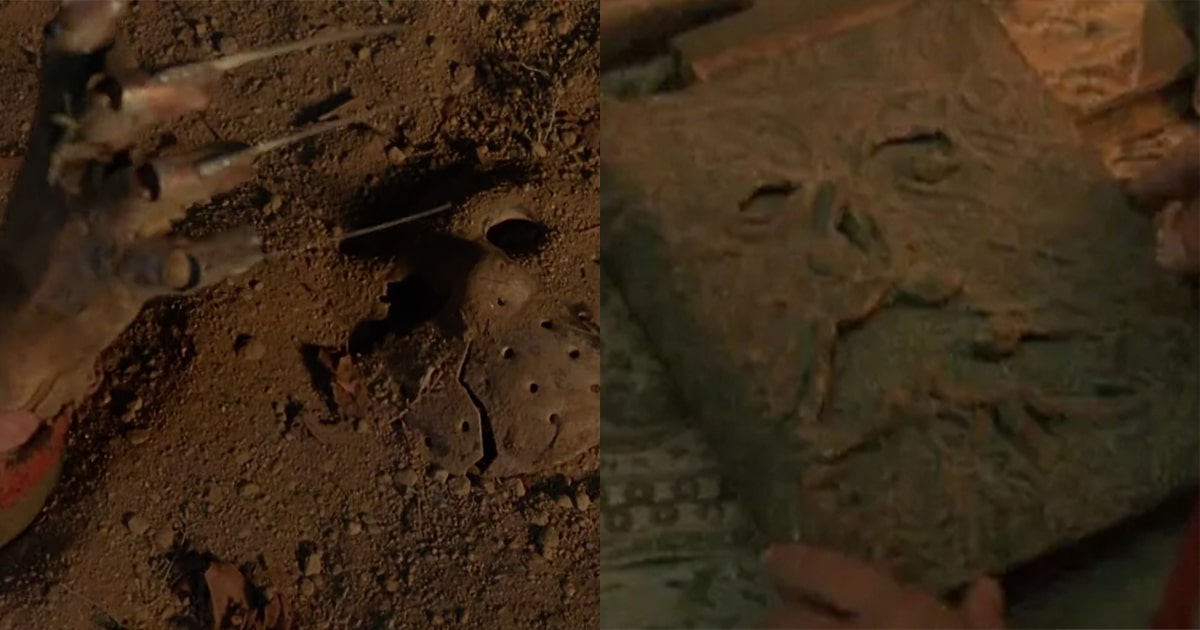 In the old Voorhees house featured in the film, we get a glimpse of the Necronomicon, the infamous book of dark magic which is central to The Evil Dead. Director Sam Raimi’s horror series had spawned three entries up to that point: 1980’s The Evil Dead, 1987’s Evil Dead II, and 1992’s Army of Darkness. All three films starred Bruce Campbell as Ashley J Williams, the square-jawed but dim-witted hero with a chainsaw for a hand, caught in an endless battle with the monstrous ‘deadites.’

As well as implying that the Necronomicon is the source of Jason’s power, the book’s appearance in Jason Goes to Hell also makes it evident that the Evil Dead movies exist in the same universe as Friday the 13th and A Nightmare on Elm Street: a massively exciting idea for 80s horror aficionados. But first things first: Jason and Freddy had to fight.

Arriving in the wake of 1994’s New Nightmare and 2001’s Jason X (neither of which were big hits), 2003’s Freddy vs. Jason proved unexpectedly popular. Reviews were mixed, but the film’s $116.6 million global box office takings were hard to ignore, and as 20th Century Fox were already making 2004’s Alien vs. Predator, horror crossovers briefly looked to be the wave of the future. New Line started looking into Freddy vs. Jason 2, and quickly got their hearts set on adding The Evil Dead’s Ash to the fight. 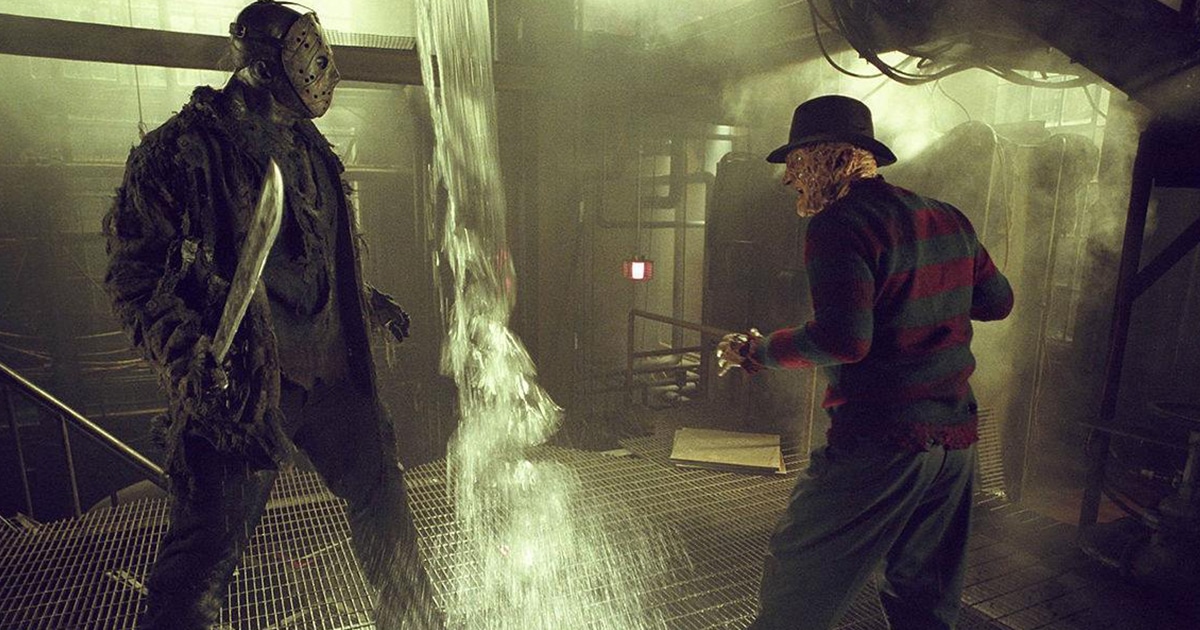 Screenwriter Jeff Katz was hired to write a story treatment for a film provisionally titled Freddy vs. Jason vs. Ash. His pitch took place at Christmas time, five years after the events of Freddy vs. Jason, and saw Freddy trapped in Jason’s mind following their last battle. After searching Jason’s memories, Freddy discovers the Necronomicon, which he realises could be his ticket out.

Meanwhile Ash, who comes to town to work at a new branch of S-Mart (the retail store where he works in Army of Darkness), is also on the evil book’s trail, aided by a courageous young co-worker named Caroline. Naturally, most of the other S-Mart employees are Freddy or Jason victims in waiting, and the action in Katz’ treatment includes scenes of Jason hacking his way through a busy S-Mart, Ash facing Freddy at the Evil Dead cabin in his nightmares, and Jason’s victims coming back as ‘deadites’ to take revenge on their killer. 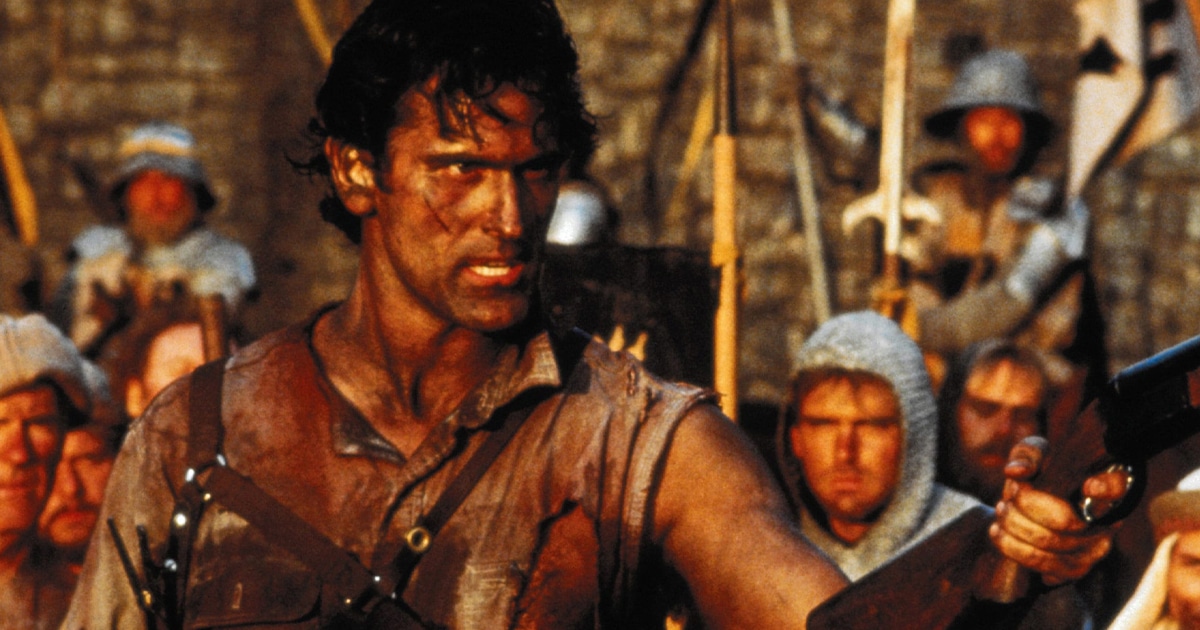 Freddy vs. Jason vs. Ash was a great idea in theory, but New Line hit the exact same hurdle that Paramount had faced 16 years earlier when they tried to bring Freddy into Friday the 13th Part VII: they didn’t actually own the rights to the character they wanted to use. Ash had been off screens for over a decade at this point, so though the idea of him returning to fight Freddy and Jason was thrilling to horror fans, Bruce Campbell, Sam Raimi and producer Rob Tapert (who collectively held the Evil Dead rights) had reservations.

As Campbell explained on Reddit years later, “I’ll be honest with you. I’m not real interested in cross overs. One of the main reasons why Ash vs. Jason vs. Freddy did not come to pass is because we couldn’t control any other character other than Ash. That felt like a creatively bankrupt way to go. Not to mention, you’re splitting the proceeds three ways with partners you might not want.”

Still, the Evil Dead team was open to having Ash battle Freddy and Jason on one specific condition. Freddy vs. Jason ends with Jason ostensibly winning, yet both he and Freddy are revealed to have survived in the final moments. If Raimi, Campbell and Tapert had got their way, Freddy vs. Jason vs. Ash would have ended with Ash destroying both the Springwood Slasher and the Camp Crystal Lake Killer – for good. 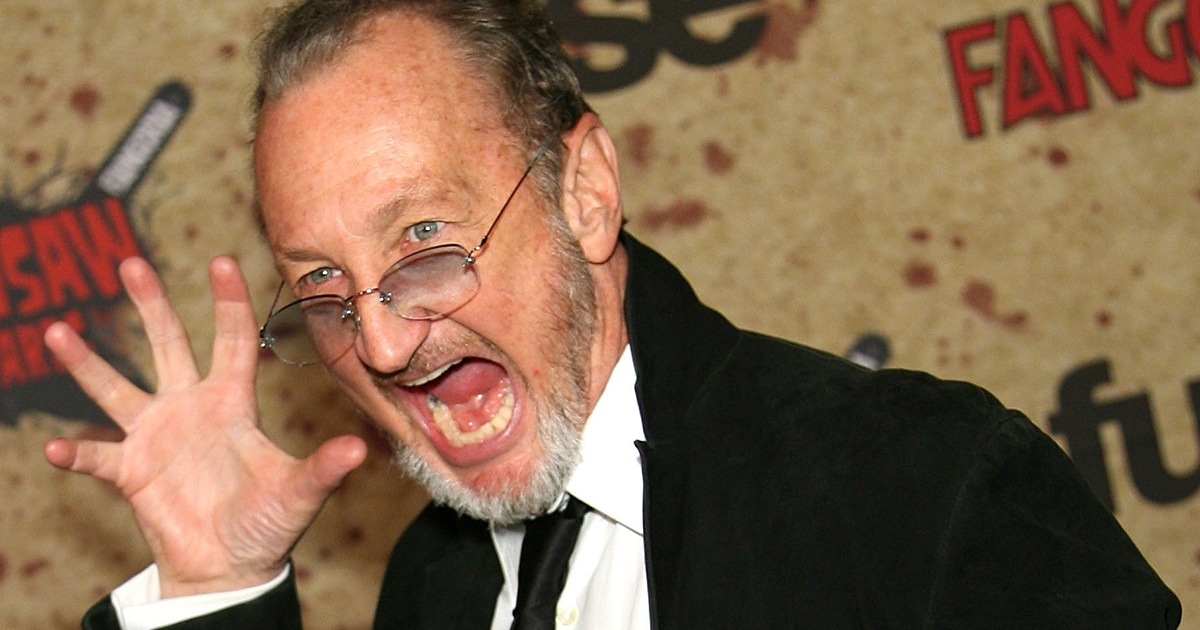 Given that New Line is informally known as ‘The House That Freddy Built,’ many at the studio took umbrage at the idea of killing off their flagship character/cash cow. However Freddy himself, Robert Englund, was all for it. By 2004, the actor was 57 and keen to retire from the physically demanding, makeup-heavy role he had begun playing almost two decades earlier.

Englund reflected in 2017, “New Line Cinema was against it… [but] I loved the idea. I had this vision of the poster. Bruce Campbell with his shirt open and all of his abs spray painted and highlighted, with Freddy Krueger under [one] arm and Jason under [the other] arm. And the poster would say: ‘Freddy vs. Jason vs. Ash: Keeping the world safe from sequels.’”

Producer Stokely Chaffin understood Englund’s wishes, and agreed to Ash killing Freddy. In a memo issued to New Line executives (made public in 2017), Chaffin argued, “Per our conversations with him [Englund] in the past, he agrees that the fans will embrace and accept the idea of Ash killing off our burned villain for good, as opposed to their reaction should a 16-year-old virgin girl do the job (again).” 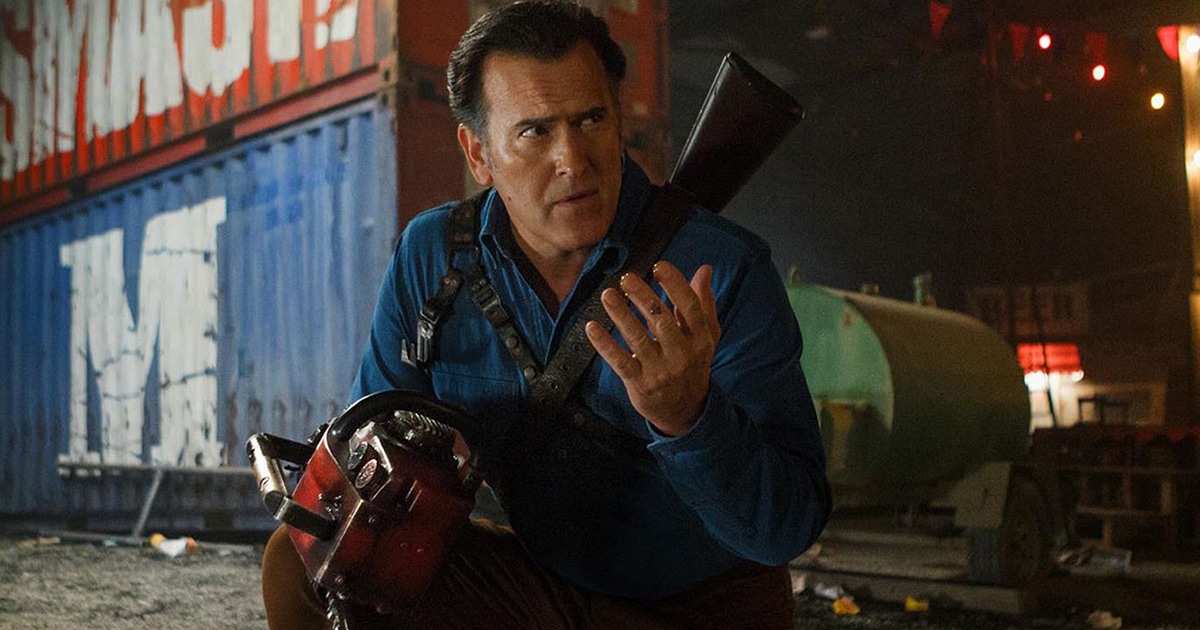 Ultimately, no agreement could be reached, and Freddy vs. Jason vs. Ash hit the bin. Freddy vs. Jason subsequently proved the swan song for the original runs of Friday the 13th and A Nightmare on Elm Street, both of which were rebooted within seven years. True to his word, Englund never played Freddy again (aside from an appearance on sitcom The Goldbergs), whilst the Friday the 13th series was forcibly put on hold by a complex legal battle.

An Evil Dead reboot was also made in 2013, but this didn’t keep Bruce Campbell from reprising the role of Ashley J. Williams in TV series Ash vs. Evil Dead in 2015. As would have been the case in Freddy vs. Jason vs. Ash, the show saw the ageing monster hunter joined by two of his young S-Mart co-workers (Ray Santiago’s Pablo and Dana DeLorenzo’s Kelly) in his war against the deadites.

Although Ash vs. Evil Dead went down a storm with fans, the series didn’t do well enough in the ratings to last, and was axed after three seasons. At that time, Campbell (then aged 60) declared he would not play Ash again. The actor/producer explained in 2021, “Ash is gone. I’ve retired the character because I physically just can’t do him anymore, so why bother? Why do I do it? It’s time to hang up the chainsaw.” 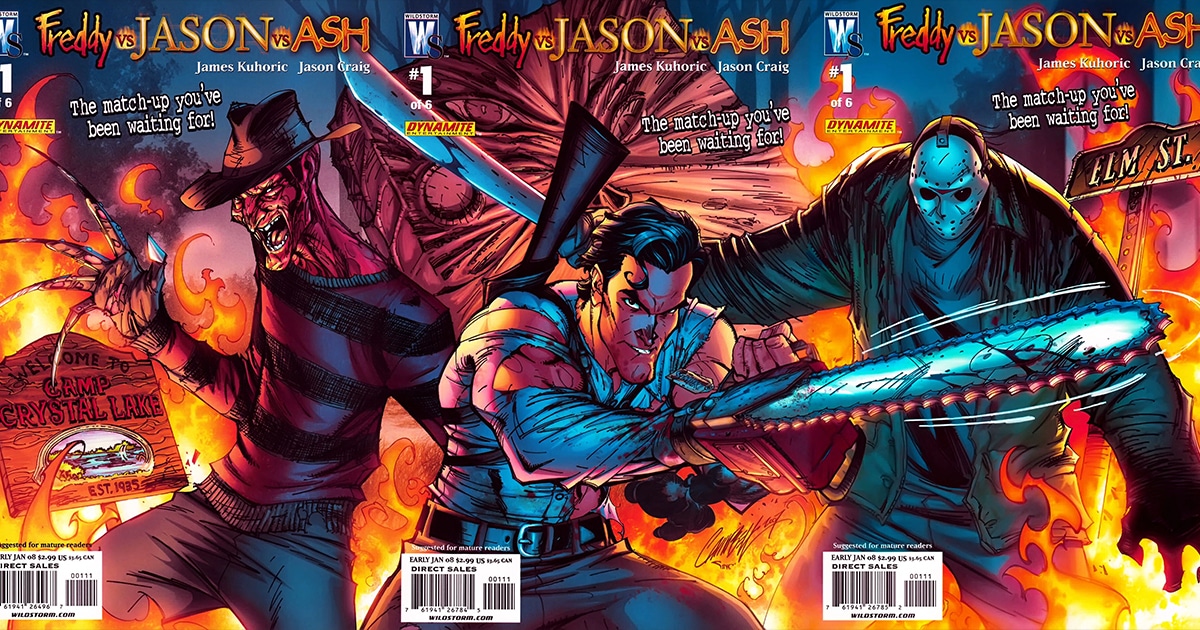 Nonetheless, The Evil Dead will continue without Ash: a fifth film in the series, Evil Dead Rise, is set to hit screens in 2023. Rumours of another Nightmare on Elm Street reboot have long done the rounds, and there is also speculation that Friday the 13th may be revived at some point.