When you think of the best actor-director partnerships in cinema, you probably think of the likes of Robert De Niro and Martin Scorsese, or John Carpenter and Kurt Russell. For a certain breed of film fan, though, there’s no better actor-director team than Bruce Campbell and Sam Raimi.

Filmmaking has always been the backbone of Bruce Campbell and Sam Raimi’s relationship. Friends since they met in high school drama class in their mid-teens, Campbell and Raimi spent much of their adolescence making no-budget short films together, before they spectacularly broke into features with 1981’s notorious The Evil Dead.

From there, Campbell and Raimi would go on to quite different careers: Campbell as a cult B-movie actor, Raimi as a blockbuster filmmaker. Still, even now into their 60s, Campbell and Raimi have remained inseparable, with Campbell having appeared in all but five of the 15 feature films Raimi has directed to date. 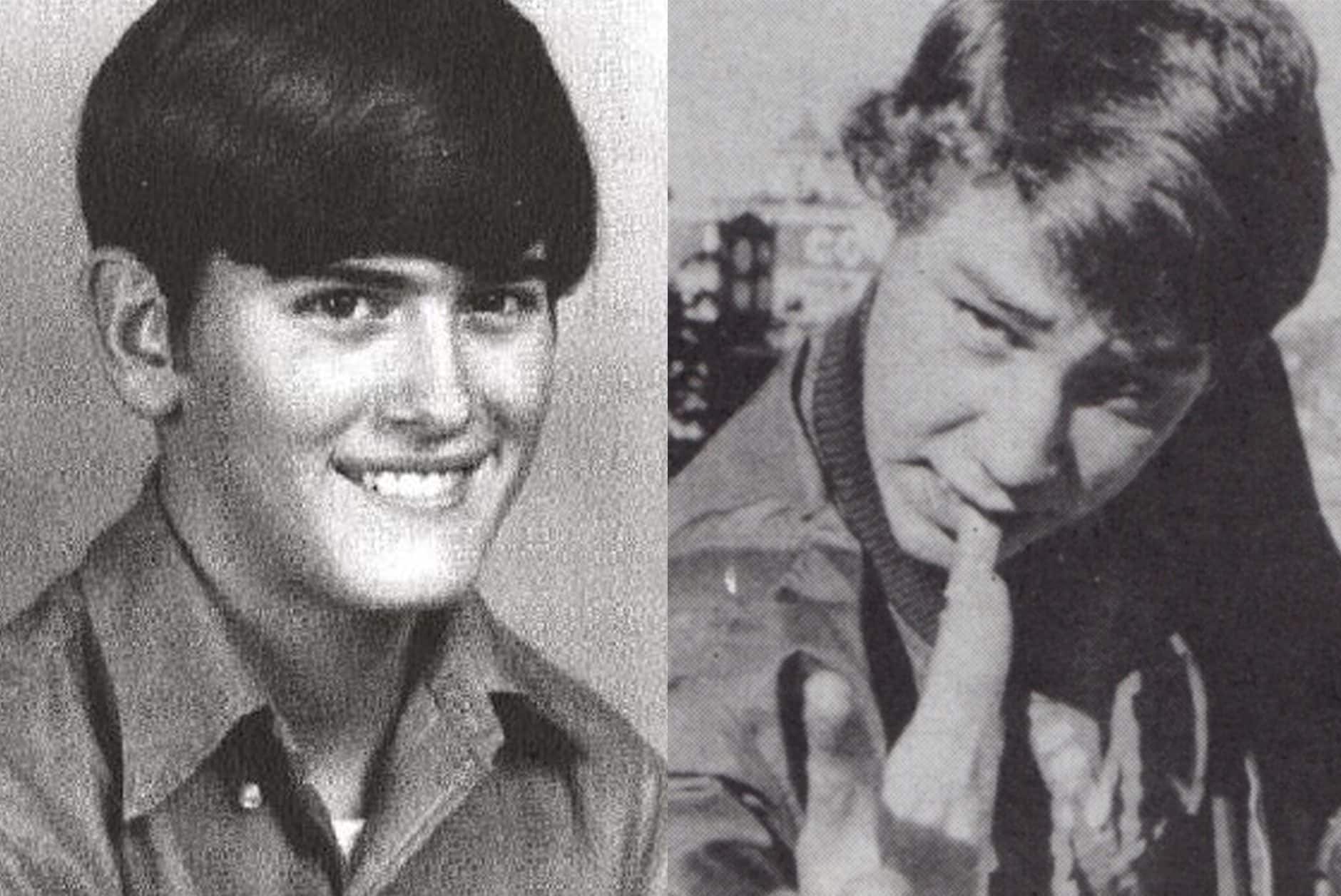 Bruce Campbell was born June 22, 1958, almost exactly 16 months before Sam Raimi came into the world on October 23, 1959. They were even born at the same hospital in Royal Oaks, Michigan. Their experiences coming up, however, would be rather different.

Campbell describes growing up in the Pacific Northwest town as “damn near idyllic,” while Raimi endured childhood tragedy: his elder brother Sander drowned aged 15, an experience which the filmmaker says “colours everything you do for the rest of your life.”

The loss helped keep the Raimi family a tight-knit unit. Sam’s younger brother Ted Raimi has acted in many of Sam’s films, whilst elder brother Ivan Raimi has co-written several of them. It would be Sam and high school friend Bruce, though, who would go on to become the closest collaborators. 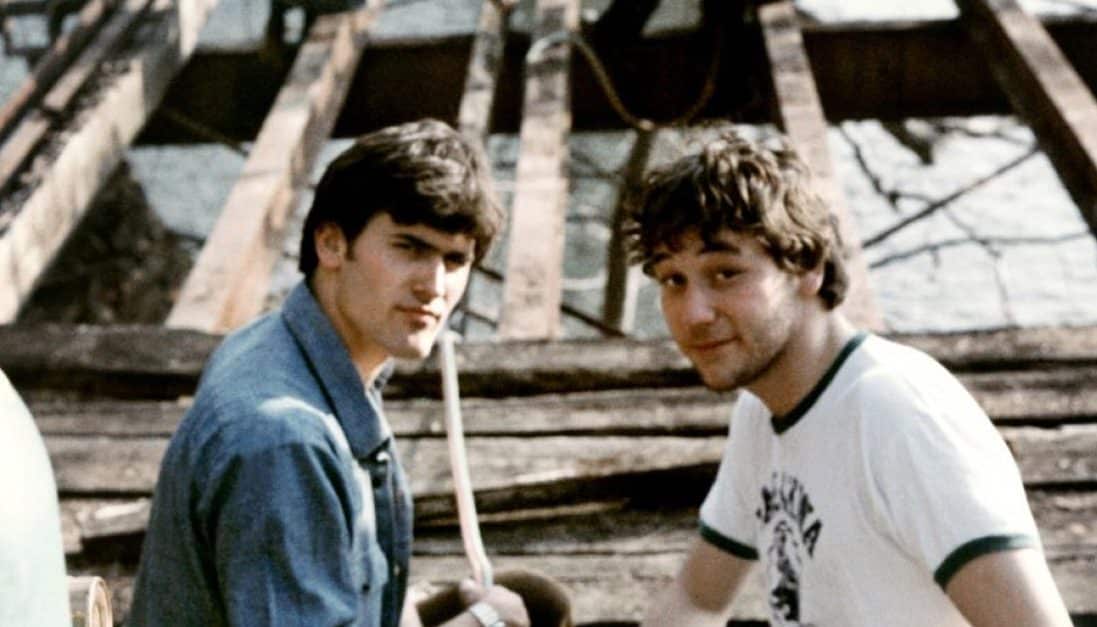 Campbell and Raimi weren’t exactly best buddies overnight. Campbell recalls, “I met Sam in junior high – very briefly while I was with a friend of his – and he was dressed as Sherlock Holmes, playing with dolls. I thought he was a creepy weirdo, and I avoided him, officially, until drama class in high school, in 1975.”

Once acquainted, the two youngsters soon found they had a common passion: making movies, with the Super-8 film cameras which were popular at the time. Michigan’s Wylie E. Groves High School found itself host to a “a weird group of about six of us, who wound up teaming up and making Super-8 movies on weekends – almost every weekend.”

Some of these were people Raimi and Campbell would continue to work with in adulthood, including Scott Spiegel (co-writer of Evil Dead 2) and Josh Becker (a writer and director on TV’s Xena: Warrior Princess). Along the way they were joined by Rob Tapert, who became a long-time producing partner with Raimi and Campbell; together they founded film and TV company Renaissance Pictures. 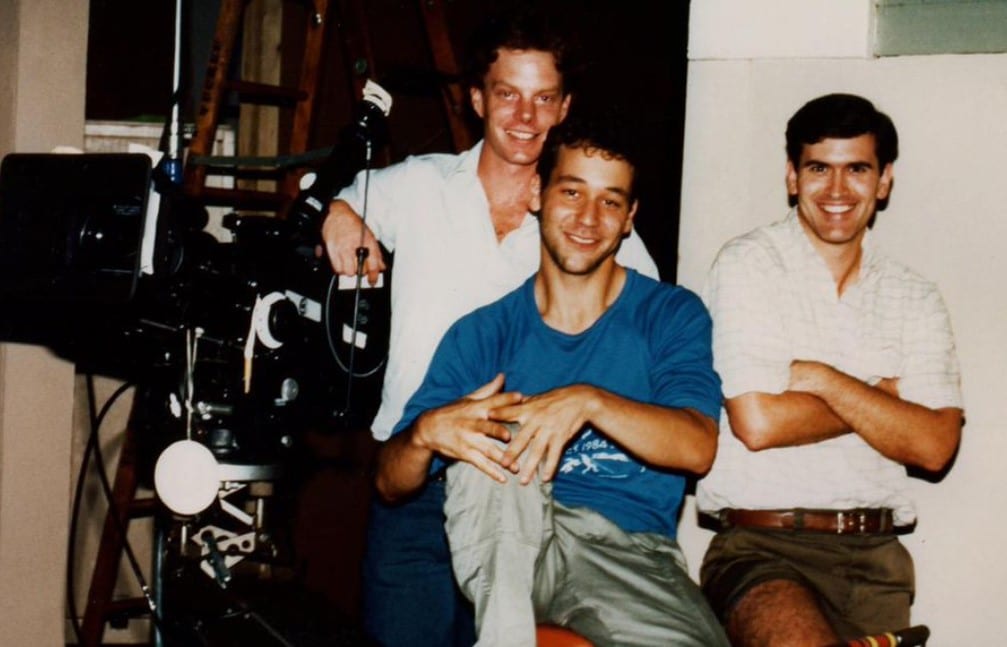 Most of the films the young Raimi and Campbell made together were slapstick comedies, but when they started thinking about making a real feature film, they realise this very old-fashioned brand of humour might be a hard sell.

Eventually, in cahoots with producer Tapert, they hit upon the idea of making a horror movie, and as research started frequenting drive-in cinemas to see as many scary movies as possible. Campbell reflects in Bill Warren’s book The Evil Dead Companion, “we realised some of the most effective ones got really relentless,” so they set about making “a horror film with a capital H.” 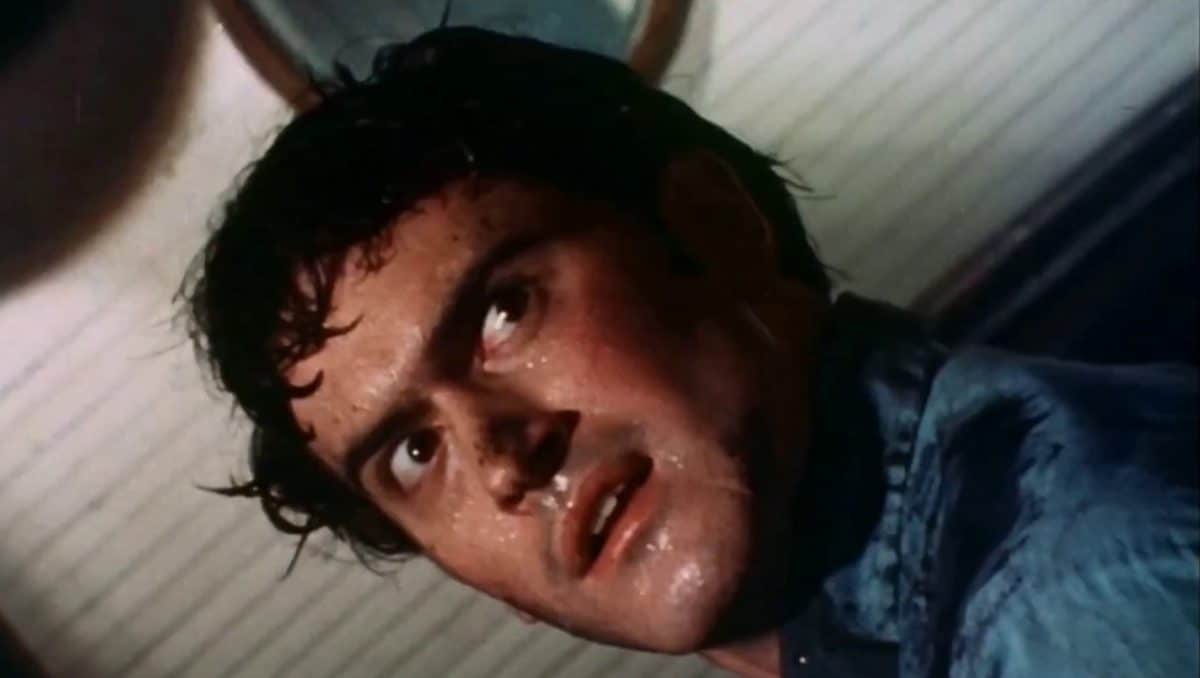 ‘Horror with a capital H’ meant the characters would suffer horribly, and Raimi saw to it that Campbell’s lead protagonist Ashley J Williams would suffer the most. As Campbell recalls in his memoir If Chins Could Kill, “we needed gallons of [fake blood], and most of it had one destination… me.”

Shot with minimal crew on a low budget, The Evil Dead had a gruelling production, but the result was a breakthrough hit upon release in 1981. The film did however prompt a great deal of controversy for its extreme violence, particularly in the United Kingdom.

After becoming the number one selling video in the country, The Evil Dead was banned by the British government as a ‘video nasty.’ (The Evil Dead would eventually be re-released with cuts in 1990, before finally being re-issued uncensored in 2001.) 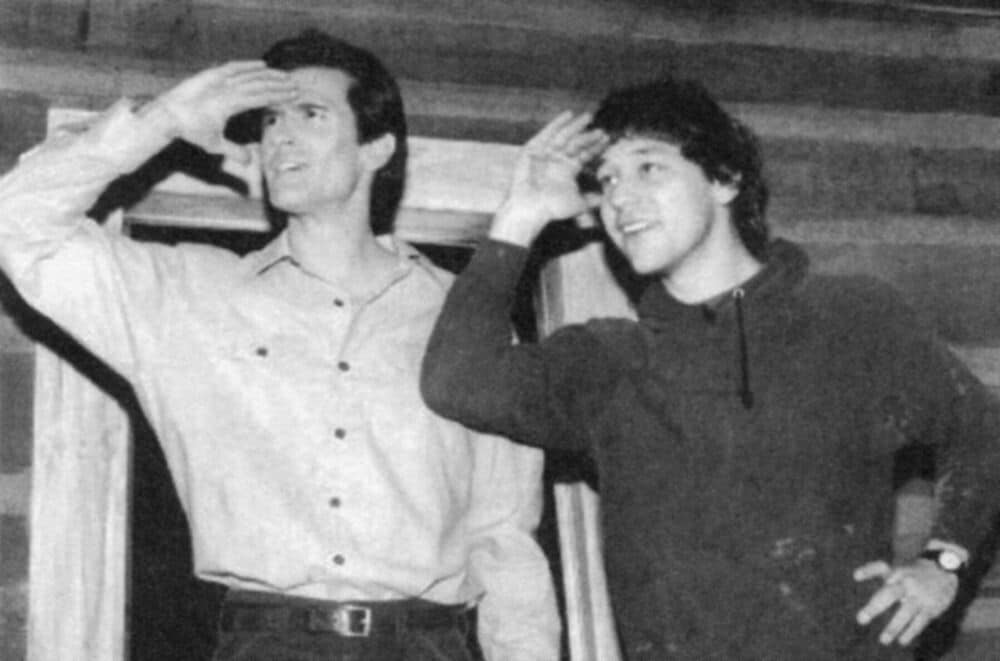 When Raimi and Campbell’s second film Crimewave flopped, they made Evil Dead 2 in the hopes of securing another hit. True enough, the 1987 sequel did great business, enabling Raimi to set up his first film for a major studio, 1990’s Darkman – and the director wanted Bruce Campbell in the title role.

Campbell had enjoyed some success outside of the Evil Dead films, including a cameo in the first Coen brothers film Blood Simple and the lead in action-horror Maniac Cop, but studio Universal was unconvinced of the actor’s star power.

Darkman would instead by played by Liam Neeson – but as the character regularly changes his appearance using experimental skin grafts, Campbell was able to sneak in a cameo, playing the role in a single shot at the film’s end. 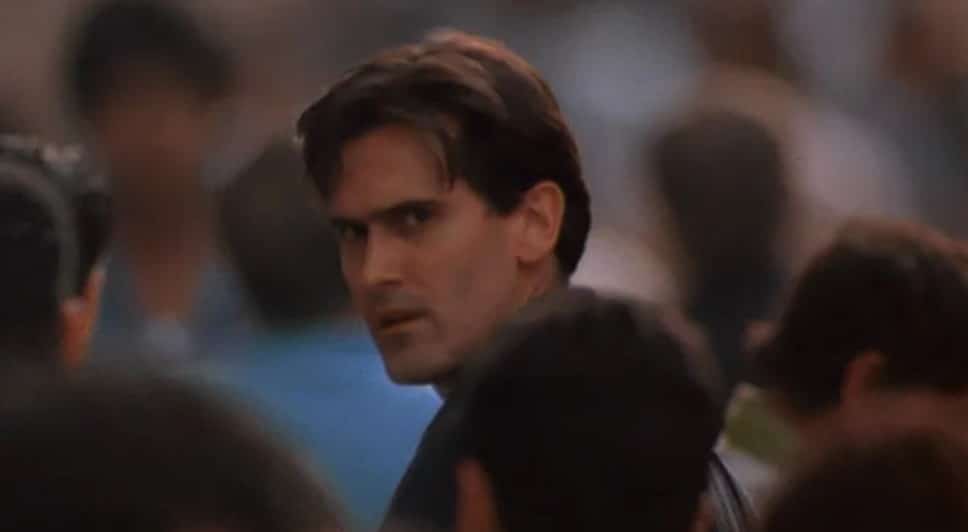 Darkman was a big enough hit to get Raimi a green light for the third Evil Dead movie, Army of Darkness. This time around, Campbell was approved as the lead – but it proved to be both the first and last time he headlined a major studio film, as, following a troubled production, Army of Darkness flopped.

Even so, Raimi had done enough to find himself under consideration for major projects. Raimi was hired to direct Sharon Stone, Gene Hackman, Russell Crowe and Leonardo DiCaprio in 1995 western The Quick and the Dead. The director enlisted Campbell for a cameo, but it wound up being cut from the final film; this, sadly, was one of many large-scale near misses to hit the actor’s career in the 90s. 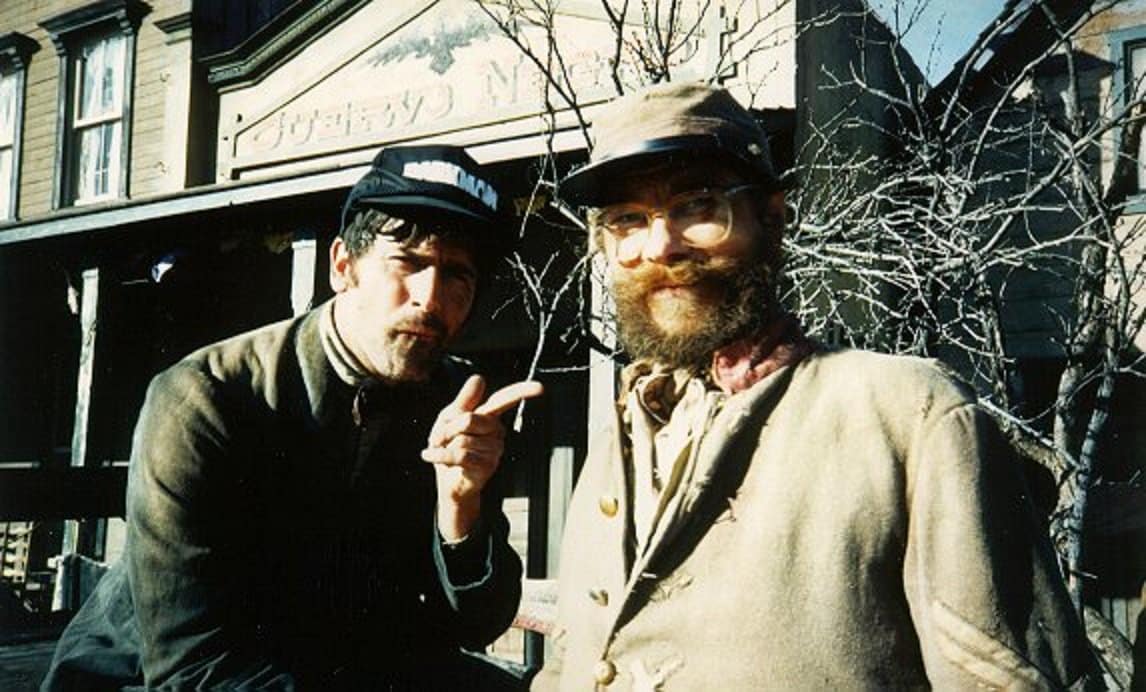 Campbell’s TV series The Adventures of Brisco County Jr. was cancelled after one season; after being initially offered the male lead in Congo, he was demoted to a cameo (and the film flopped); and he lost out on the lead role in The Phantom to Billy Zane.

Still, Campbell did manage to land a couple of small roles in major movies, including Coen brothers comedy The Hudsucker Proxy and John Carpenter’s Escape from LA. And through it all, the link with Raimi remained.

Campbell was roped in for a key recurring role, the thief Autolycus, on the Raimi-produced TV shows Hercules: The Legendary Journeys and its more popular spin-off Xena: Warrior Princess. Campbell also got to direct a number of episodes, including the Hercules series finale. 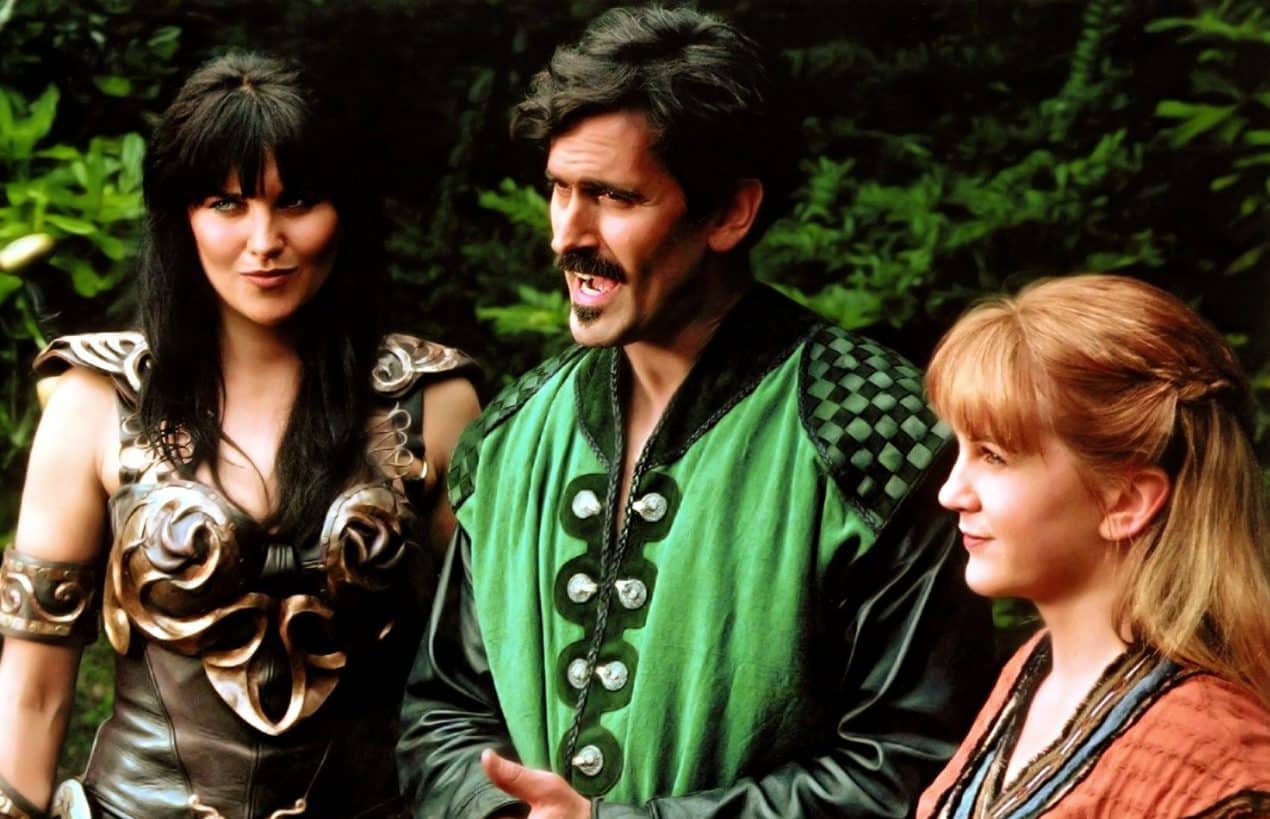 The late 90s saw Raimi gear toward surprisingly mature, dramatic material as a director, with acclaimed drama A Simple Plan, Kevin Costner baseball movie For Love of the Game and supernatural murder mystery The Gift, none of which found room for Campbell. (More surprisingly, Campbell would also fail to make an appearance in Raimi’s 2009 return to horror, Drag Me to Hell.)

However, when the director was handed the reins to the most eagerly anticipated blockbuster of the era, 2002’s Spider-Man, it was only natural that Campbell be involved. Campbell wound up making appearances in all three of Raimi’s Spider-Man films, as three distinct characters: first as the wrestling announcer who gives the hero his name, then as Spider-Man 2’s obnoxious theatre usher, and finally as a maître d’ in Spider-Man 3.

There were even tentative discussions about Campbell’s involvement being taken to the next level had Raimi directed a fourth Spider-Man, with Campbell earmarked for the role of main bad guy Mysterio. However, Raimi’s Spider-Man 4 never came to pass, and years later Jake Gyllenhaal would portray Mysterio in Spider-Man: Far from Home. 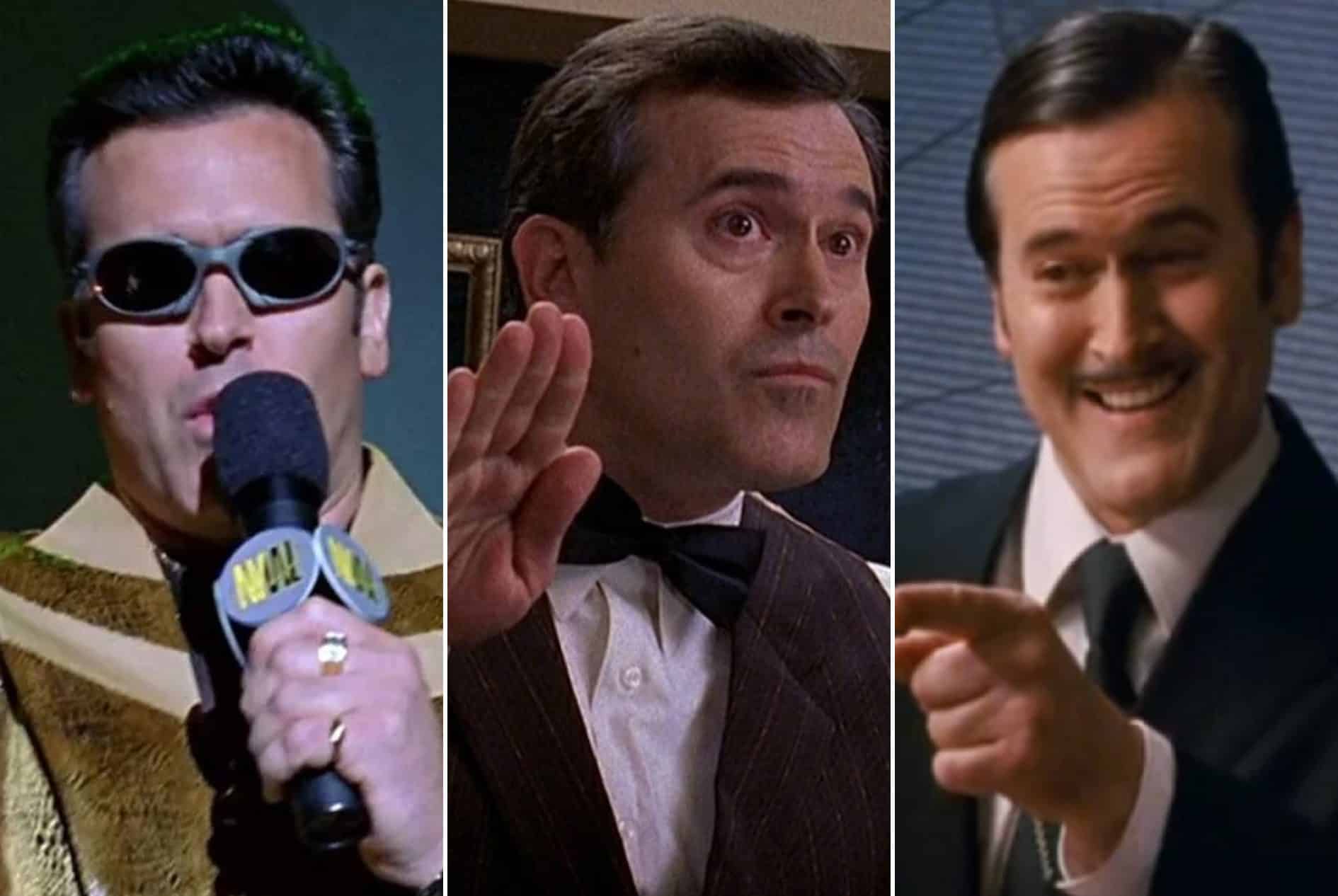 Fans were arguably most excited when Raimi and Campbell reunited on TV’s Ash vs. Evil Dead, a small screen sequel to their signature franchise. Raimi would write and direct the 2015 premiere episode and served as executive producer for the duration the series, which ran for three seasons.

Much to the disappointment of fans, Campbell has insisted the end of Ash vs. Evil Dead marks the end of his tenure as Ash, although both he and Raimi are executive producers on the upcoming Evil Dead Rise, the sequel to 2013’s Ash-free reboot.

Even though Campbell’s mainstream roles are comparatively few (Sky High, Cloudy with a Chance of Meatballs, TV’s Ellen and Burn Notice) and the bulk of his work his been in low-rent B-movies, he has nonetheless become one of Hollywood’s most beloved cult film icons, thanks in no small part to his larger-than-life persona and fan-pleasing ways.

Campbell’s laidback, less-than-serious nature has fed into his cameos in Raimi’s more recent films: Campbell’s brief appearances in Oz the Great and Powerful and Doctor Strange in the Multiverse of Madness are the director’s way of winking to the audience, reminding them that, while they may be older and working with bigger budgets, it’s still business as usual for old Sam and Bruce. 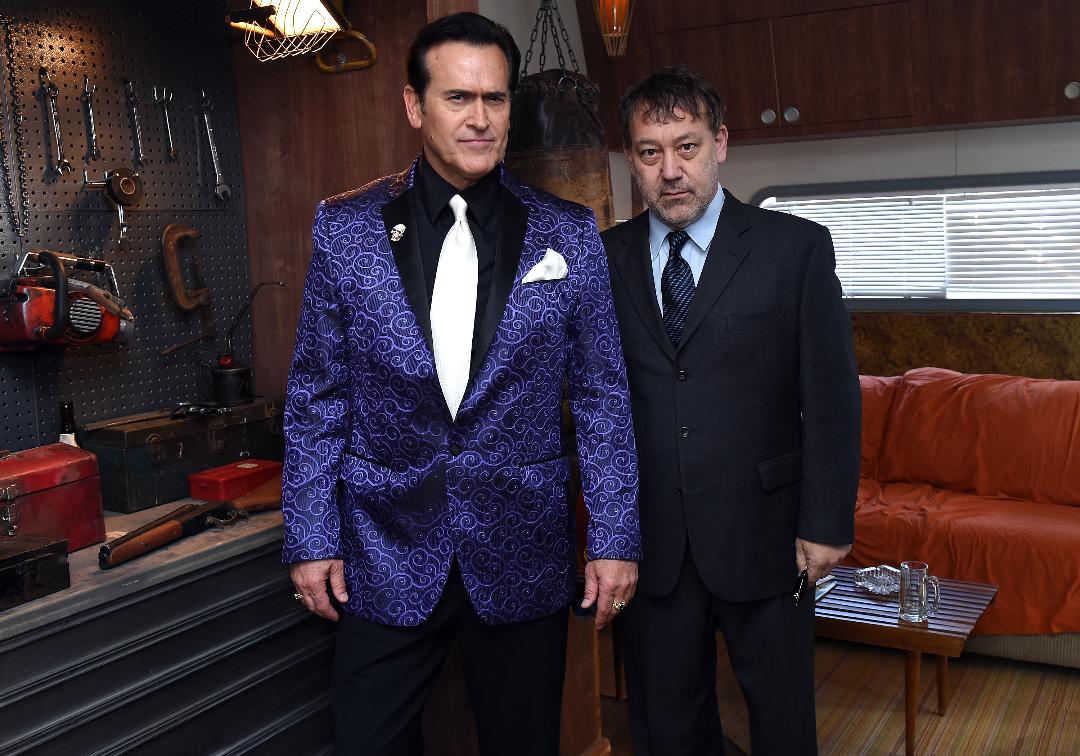 Campbell might not have become the big time Hollywood actor many felt he was destined to become, but with Raimi, the actor says he gets to do the next best thing: “All I’m there for is to f*** with the lead guy. That’s it. I belittle him, make fun of him, confront him and harass him.” This is a fair summation of all Campbell’s interactions with Tobey Maguire’s Spider-Man, as well as with Benedict Cumberbatch’s Doctor Strange.

With his customary tongue-in-cheek bravado, Campbell says the key reason Raimi keeps casting him is that his appearance will “change the movie forever. Sam is aware that I’ve made his movies iconic.”