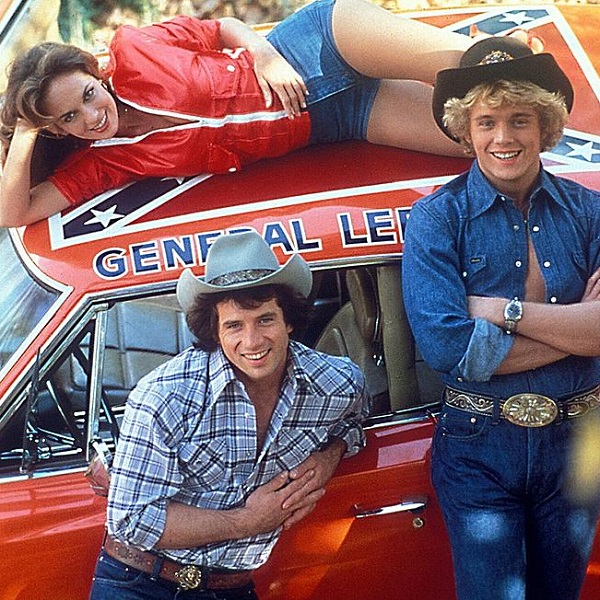 The Dukes Of Hazzard

Most of the popular action-based TV shows of the 80s were notable for their sleek, high-tech, glamorous sensibility - yet one of the most beloved of them all was quite the opposite. Launched in 1979, The Dukes of Hazzard was an action comedy series with a Southern-fried flavour, blending country bumpkin humour with thrilling car stunts, and more than a dash of sex appeal.

Pivotal to the show's popularity was its iconic car: a souped-up orange Dodge Charger nicknamed the General Lee. The presence of a Confederate flag on the roof might raise eyebrows today, but it was a car every kid wanted to ride in back then - so long as we got to slide across the hood, climb in through the window, beep the horn that played Whistling Dixie and scream "yee-ha!" as it jumped the river.

Meanwhile, the slightly older boys were equally interested in Daisy Duke. Catherine Bach became a major pin-up off the back of the role, and her signature denim hot-pants. It's a sign of the character's impact and the show's success that such shorts are still referred to as Daisy Dukes.

However, the show’s success did lead to some troubles. Before the fifth season, actors John Schneider and Tom Wopat got into a contractual dispute with the network over royalties, which saw them replaced for one season by Byron Cherry and Christopher Mayer as two more Duke boys, Coy and Vance. Viewers weren’t best pleased, and ultimately things were ironed out for Schneider and Wopat to return for the last two seasons, before the plug was pulled in 1985.

Remember Catherine Bach AKA Daisy Duke? Here’s What She Looks Like Now

10 Things You Didn’t Know About the Dukes of Hazzard