In the 80s, we had very simple expectations from our movies and TV shows. We wanted cool stuff, and we wanted it bigger, louder, faster and flashier than ever before. Happily, the powers that be were more than happy to grant us that wish, presenting us with entertainment that was more electrifying than anything that had been seen on the screen up to that point.

Of course, it wasn’t sufficient for our heroes alone to be cooler, tougher and quicker on their feet: they needed transportation with similar qualities. 80s movies and TV gave us a slew of awe-inspiring vehicles, fuelling the fantasies of fledgling speed freaks, and leaving us dreaming about being able to drive those vehicles ourselves – even if, in most cases, a Matchbox replica or model kit was the closest we were ever going to get. Don’t try and pretend that you haven’t always longed to take the wheel on these bad boys…

10. The Batmobile from Batman 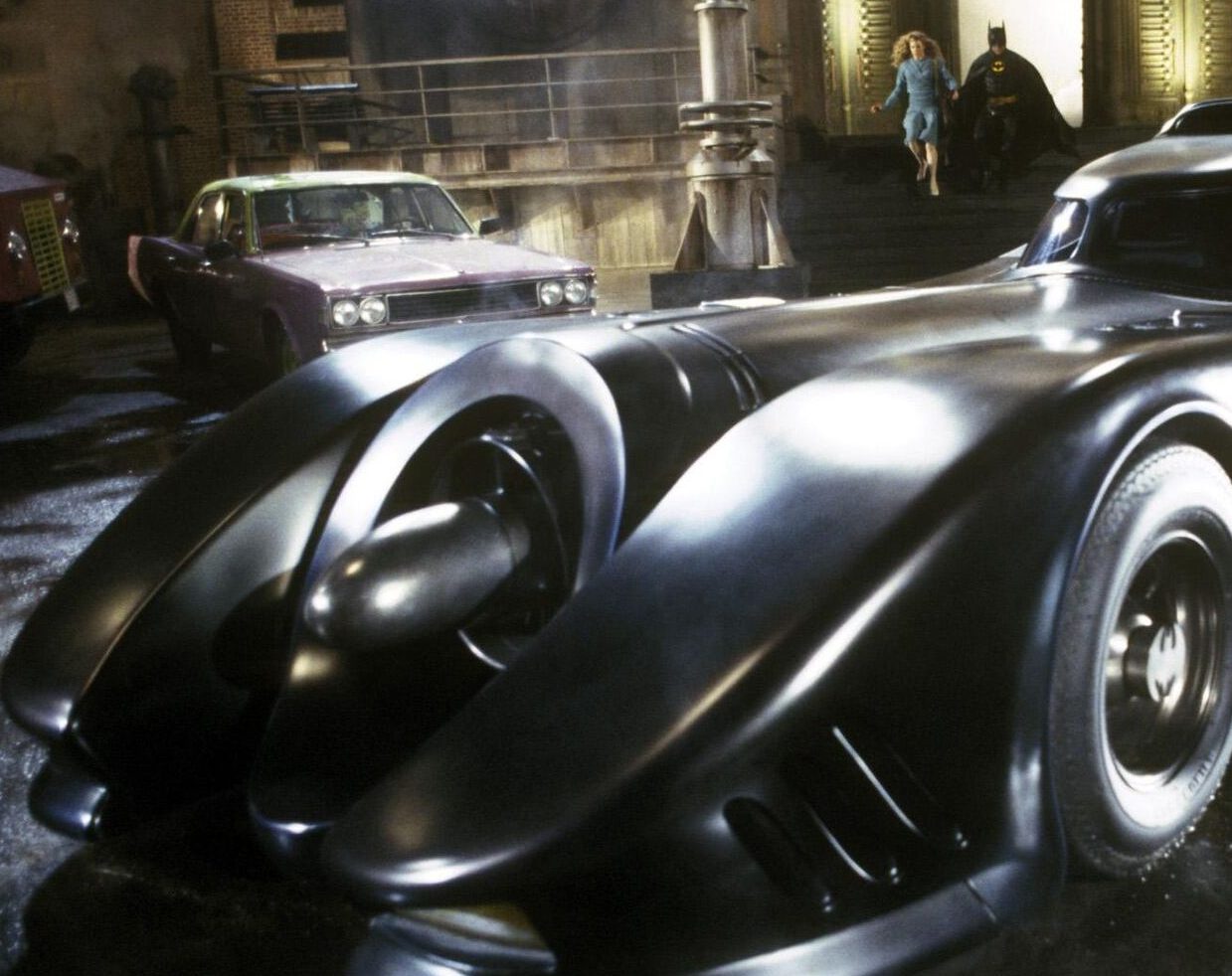 What would the Caped Crusader be without his car? Some fans might prefer the old Adam West model, whilst in more recent years Christian Bale’s Tumbler has its fair share of admirers, but few moments were more exciting in 1989’s Batman than the first reveal of Michael Keaton’s sleek, ultra-black Batmobile, after he rescues Kim Basinger’s Vicki Vale from Jack Nicholson’s Joker.

The Tim Burton Batmobile is fuelled by a jet turbine engine with numerous guns and a cocoon-like shield system. It also has a streamlined design that’s totally co-ordinated with the Bat-suit. 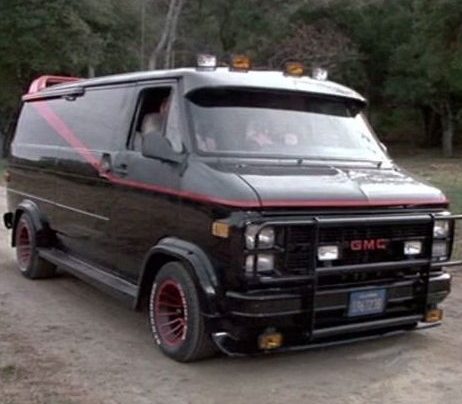 As soon as they heard the unforgettable opening credits music of The A-Team, and got a glimpse of that iconic black truck with its red stripe detail, every child of the 80s knew they were in for an hour of total entertainment – and there was no dragging us away from our TV screens, except maybe at the commercial breaks.

The A-Team’s distinctive vehicle was a GMC Vandura van; and considering how instantly recognisable it was, and how citizens in need of help had no difficulty tracking it down, it did occasionally make us wonder how the military police who were constantly on the trail of the four soldiers of fortune were somehow never able to locate them… 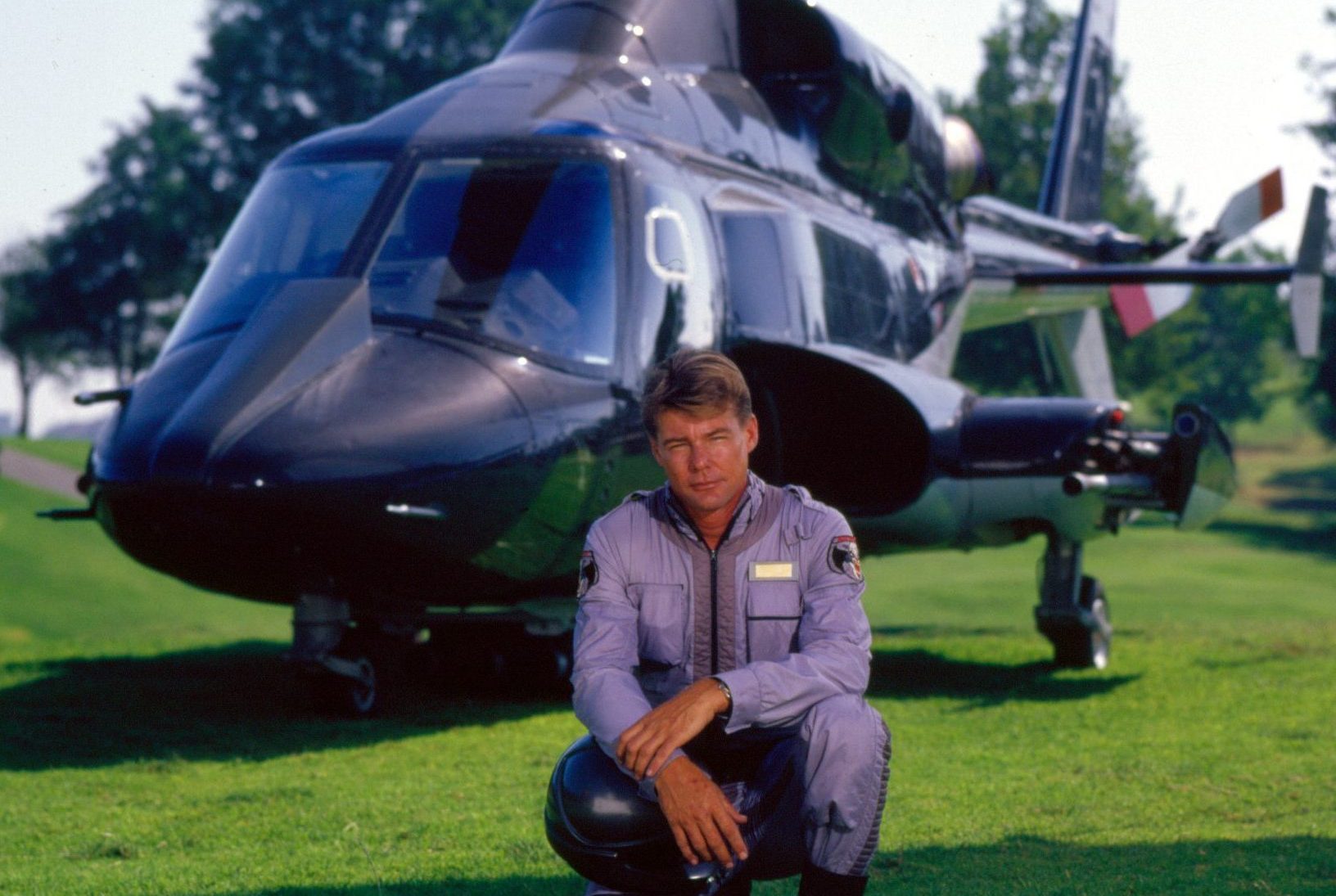 Of course, The A-Team weren’t the only crimefighting Vietnam veterans whose adventures thrilled us in our living rooms on a weekly basis in the 80s. There was also Jan-Michael Vincent’s Captain Stringfellow Hawke, who may have had one of the most ridiculous yet cool-sounding names ever, but was most notable for his mode of transportation: the super-charged stealth helicopter Airwolf.

The helicopter used in the show was a modified Bell 222 (although its real-world modifications weren’t quite so high-tech as the show would have us believe). After the show ended, the helicopter was eventually repurposed as an ambulance rescue helicopter in Germany, but came to a tragic end when it crashed in a thunderstorm, killing everyone on board.

7. The Pork-Chop Express from Big Trouble in Little China 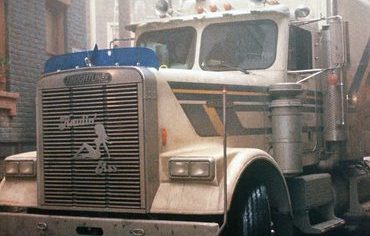 Sleek and speedy vehicles are all well and good, but there’s always been an undeniable appeal to big rig trucks – and surely the coolest such vehicle to grace screens in the 80s was the Pork-Chop Express, as driven by Kurt Russell’s square-jawed hero Jack Burton in Big Trouble in Little China.

A white 1985 Freightliner FLC 120 with blue and yellow stripe detail, distinctive pig emblem on the door and mudflap girl insignia on the grill, it’s as big, unruly and hard-wearing as Jack Burton himself; and have you ever noticed how, despite being slap bang in the middle of a huge shoot-out that turns into a kung fu battle, the truck somehow never picks up a single scratch?

6. The General Lee from The Dukes of Hazzard 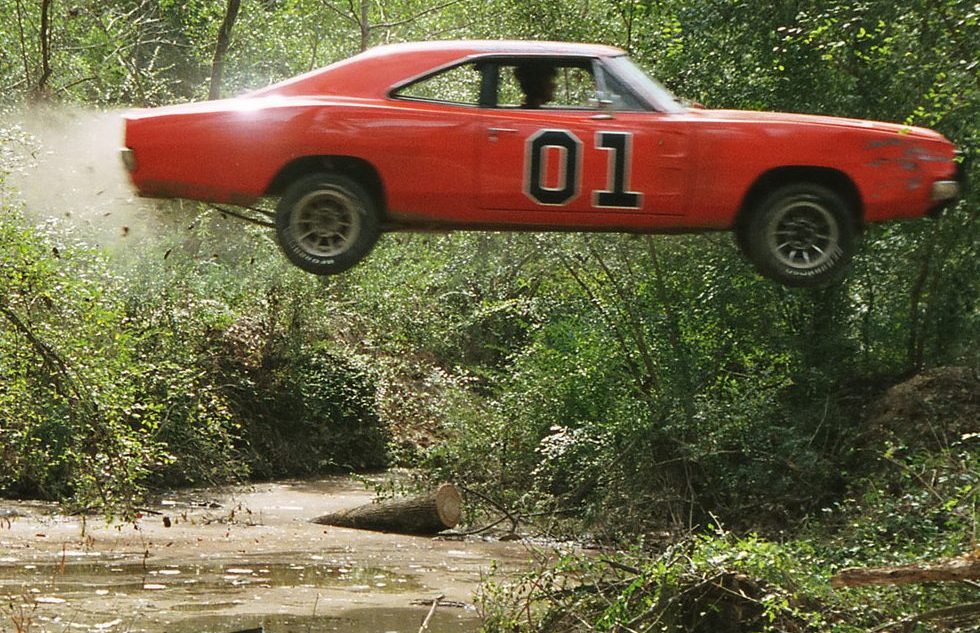 Another freewheeling TV hit we couldn’t get enough of back in the 80s was The Dukes of Hazzard. Who could fail to be spellbound by the backwater adventures of good ol’ boys Bo and Luke Duke and their perpetually shorts-clad cousin Daisy, who together raised pandemonium around Hazzard County in their signature muscle car, the General Lee?

An orange 1969 Dodge Charger with a distinctive ‘dixie’ horn and a knack for jumping over bridge-free rivers, the General Lee has since been deemed a little problematic thanks to the confederate flag printed on its roof, but we all dreamed about taking it out for a spin as kids – and climbing in and out through the windows, of course. 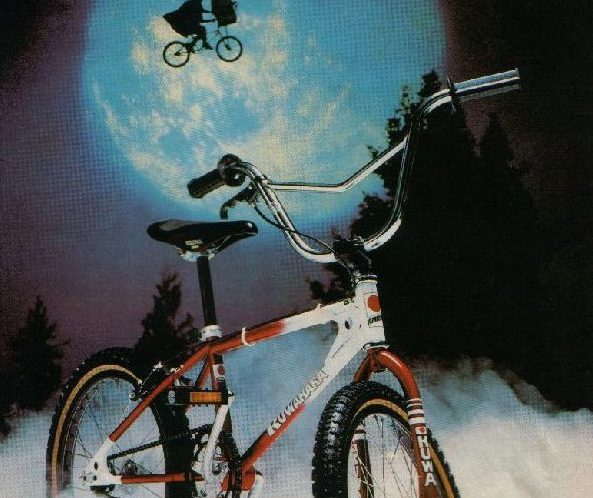 While every 80s kid could only fantasise about taking off in all of the vehicles on this list, Steven Spielberg’s classic blockbuster ET the Extra-Terrestrial presented us with an equally covetable, but considerably more accessible means of transportation: the BMX bikes ridden by Elliot, his big brother Mike and Mike’s friends in the film’s exhilarating finale.

Seeing those kids outrunning the shady government agents on their Kuwahara BMXs (whilst wearing no protective gear whatsoever!), every kid in the audience dreamed of following suit. Such was the popular demand, Kuwahara even released a special ET model BMX with a basket on the front – just right for transporting your very own diminutive alien friend. 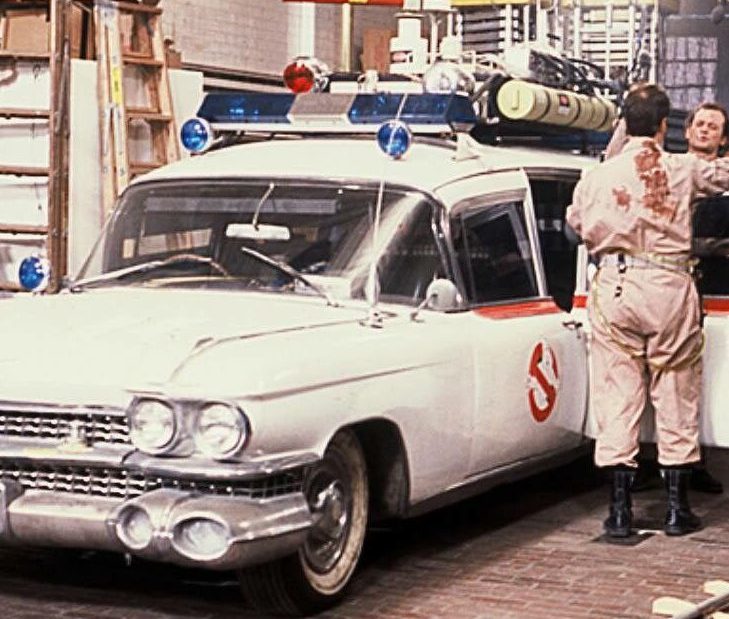 That signature siren; that unmistakable logo; all that stuff piled up on the roof for some reason we were never entirely clear about. Every 80s kid dreamed of being a Ghostbuster, and you couldn’t be a Ghostbuster without riding in Ecto-1.

Built from the chassis of a 1959 Cadillac with an eye-catching red and white colour scheme that matched the Ghostbusters emblem, we all wished that Ecto-1 was as commonplace an emergency service vehicle as ambulances, fire trucks and police cars. 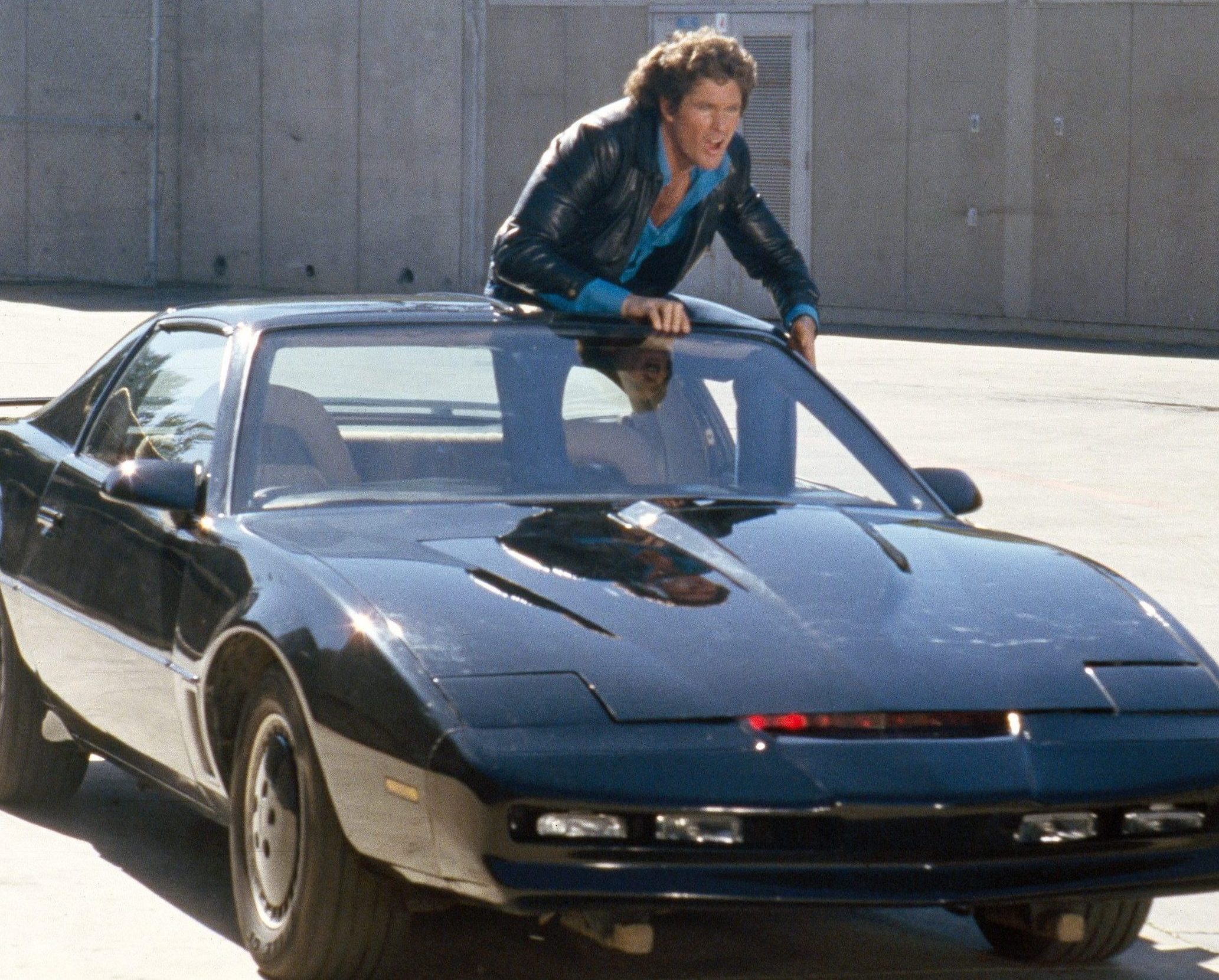 There was a bit of an ongoing battle in 80s TV over which was the coolest small screen car of them all. However, when all’s said and done, surely there was no more clear winner than the Knight Industries Two Thousand, better known as KITT, as seen on classic adventure series Knight Rider.

KITT was a black Pontiac Firebird Trans Am with a signature red scanning light, innumerable super-cool gadgets, and – oh yeah – the ability to speak. And as if all that didn’t make it the coolest car in the world already, it was also driven by David Hasselhoff. What more can we say?

2. The DeLorean from Back to the Future 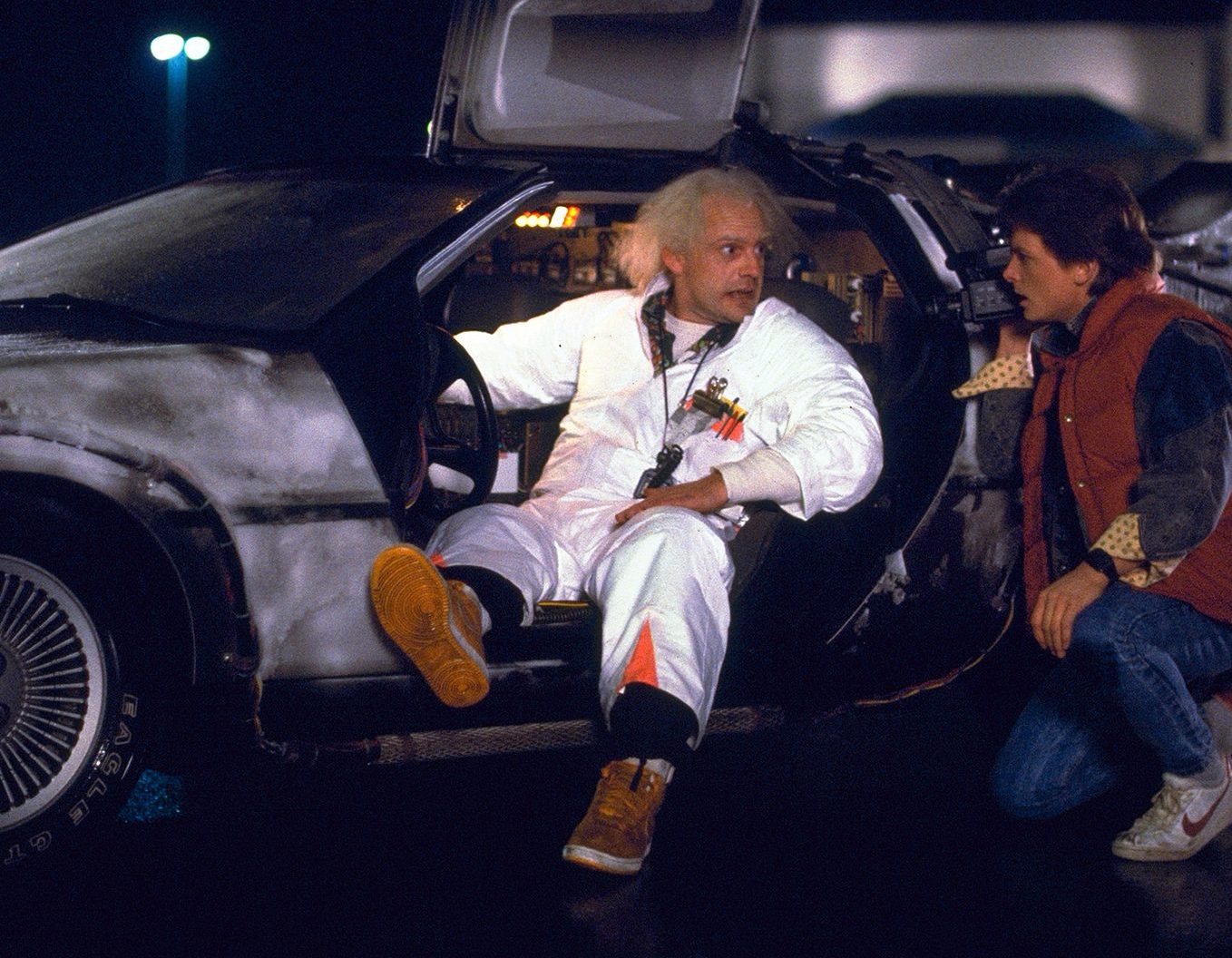 While KITT was surely the coolest four-wheeled vehicle on 80s TV screens, if we’re talking about the movies there’s surely one car that truly takes the biscuit: the DMC DeLorean converted into a time machine by the great Dr Emmett Brown in 1985’s iconic blockbuster Back to the Future.

First off, it was just the coolest-looking car imaginable, with its sleek steel body and its upward-opening doors; factor in that it could also travel in time, and by the end of the movie fly, and there was just no way it could get any cooler. (Even if some have their doubts about whether it could actually reach 88 miles per hour quite as quickly as it does in the movie.)

1. The Millennium Falcon from Star Wars 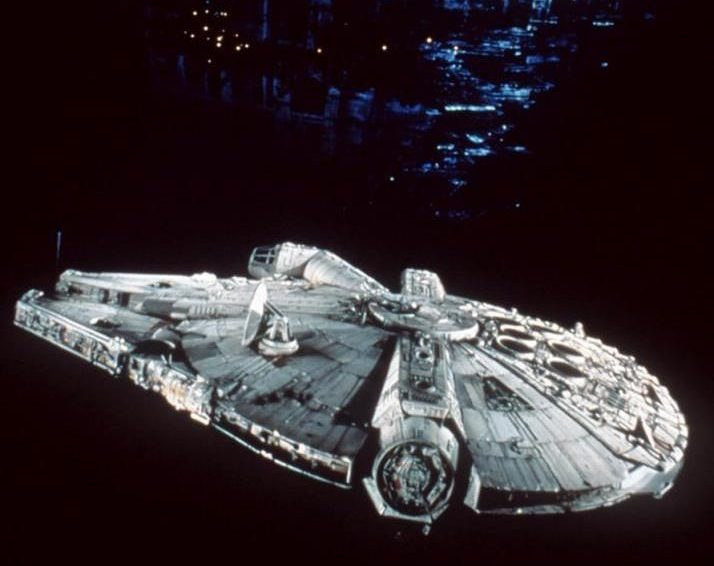 As long as we’re fantasising about vehicles, there’s no reason why that can’t include vehicles which are not of this earth, but come instead from a long time ago and a galaxy far, far away. The Star Wars movies gave us many of the most unforgettable spaceships ever put on film; and while we may have had our fantasies about flying an X-Wing or even a TIE fighter, surely no single Star Wars ship was as much the stuff of dreams as the Millennium Falcon.

You could do it all in that ship: jump to lightspeed in the cockpit, man the guns to take out Imperial enemies, make the Kessel run in twelve parsecs – and when all the action was over, you could chill out in the back and basically live there. Be honest now, we all got a little choked in The Force Awakens when Han Solo and Chewbacca came aboard and Han said, “Chewie, we’re home” – and how much we too would have loved to call the Millennium Falcon home.