10 Things You Didn’t Know About the Dukes of Hazzard

If you don’t know how to successfully slide across the bonnet of your car or enter/exit from it via the driver’s window (preferably when in the ‘down’ position), then it’s safe to assume you’ve never watched a single episode of the Dukes of Hazzard. Likewise, if you’ve absolutely no idea what the popular phrase, ‘Daisy Dukes’ refers to/originated, you haven’t lived. 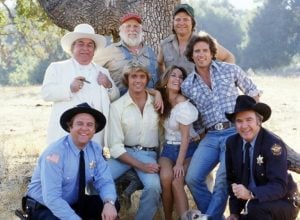 Back in the 1980s Bo and Luke Duke (along with their cousin, Daisy, Uncle Jesse and a gaggle of other good ‘ole country boys) were in cahoots to keep Boss Hogg and Sheriff Roscoe P Coltrane at arm’s length, as they ran moonshine, jumped the General Lee over various ravines, barns and collapsed bridges – while always blaring the ‘Dixie horn’ – and occasionally engaged in a punch up with some of the bar locals partaking in refreshments at the ‘Boar’s Nest’ drinking den. 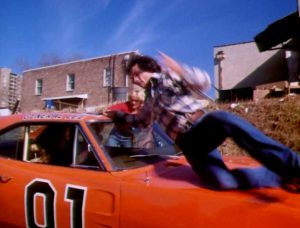 This was all played out to a backdrop of easy listening country ‘n’ western favourites and – unsurprisingly – was a huge TV ratings winner for a number of years. Incidentally, Luke Duke himself (or at least the actor who portrayed him, Tom Wopat) made something of a name for himself once the series’ had run their cause, and had been releasing country music records and touring since 1981. Indeed, shortly after the show was cancelled, Wopat found himself at number 1 in the Billboard country chart.

So there you go. An additional thing you didn’t know about the Dukes of Hazzard before I even kick things off with the official countdown below.

Apparently Luke Duke’s bonnet slide (sorry, ‘hood’ slide, if we’re staying true to the Dukes of Hazzard’s American roots) wasn’t intentional, but instead an accidental one; if there is such a thing.

Not quite sure how Tom Wopat managed to pull off such a feat (can’t quite imagine ‘slipping’/losing his footing and subsequently careering over a bonnet), but nevertheless this unprecedented incident proved popular with the directors and served as the catalyst to what became a staple of the long-running show thereafter.

9. In Japanese, Boss Hogg is ボスホッグ

I know what you’re thinking. Just why?? But there’s method in my madness, because according to DVD commentary provided by Bo Duke (played by John Schneider), Boss Hogg could actually converse in fluent Japanese. 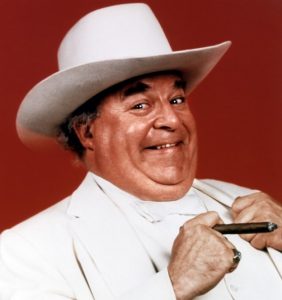 And in one on-set wind-up, both Sorrell Brooke (Boss Hogg) and a guest star by the name of Andrew Robinson (who also happened to speak Japanese) decided to read their lines for a particular scene in said Far Eastern mother tongue. Much to the bewilderment of the actor who brought Sheriff Roscoe P Coltrane to life, James Best.

Speaking of Sorrell Brooke (albeit in a more familiar American-English vernacular), and Boss Hogg wasn’t anywhere near as chubby as we were led to believe by the wardrobe department. 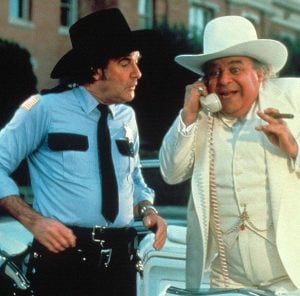 In fact, so svelte was Brooke that he wore an oversized fat suit in all but the first 5 episodes of The Dukes of Hazzard. Thus resulting in his waist circumference said to be in the region of some 5 feet in diameter.

Most of the first season of The Dukes of Hazzard was shot in two parts of Georgia; both Covington and Conyers to be geographically precise. While elsewhere in the county, Atlanta provided the backdrop for additional scenes. 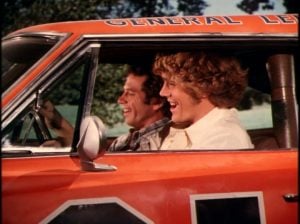 But around the time of the fifth episode, Warner Bros came to the decision to up sticks and relocate production of the show to Burbank in California; with a view to reducing production costs and being afforded better access to a larger workshop. The latter being a necessity on account of the volume of cars they envisaged they needed for each series and subsequently got through.

Car crashes were hardly an isolated occurrence while filming episodes of The Dukes of Hazzard, not when you think about the stunts they routinely pulled off. A seeming conveyer belt of 1969 Dodge Chargers – which immortalised the ‘General Lee’ – proved more challenging to replace than the odd police pursuit vehicle too, who’d have thought. 150-odd Chargers in total were ‘worked through’ during the 5-plus years of the show, with an average ratio of one being destroyed per single episode. 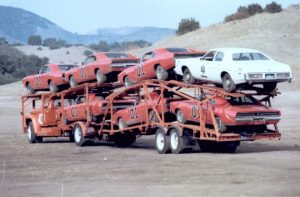 One of the main bugbears was that Dodge no longer manufactured the Charger, so producers were left with no other choice than to beg, borrow and steal any 1968 or ’69 examples they saw floating about on their travels. Seriously, if and when they clocked one on a street or parking lot, they’d make it their business to track down the owner and attempt to buy it then and there.

Legend has it that the producer of The Dukes of Hazzard – Gy Waldron – was inspired to create the show based on the underlying fact that one sixth of all music record sales in the States during this period, were country. 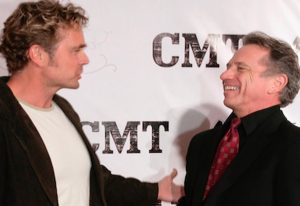 Yet he realised that not one TV show had taken advantage of this and aimed a show directly at the un-tapped country market. Waldron soon rectified this by ensuring that all the episodes which followed were penned in an instantly recognizable country music narrative style.

If one clothing item defined a decade more than any other, then a pair of Daisy Dukes was it. Even going as far as to usurp Colby-esque big shoulder pads. Actress Catherine Bach dreamt up her character’s distinctively hit-and-miss denim cut-off shorts as a retort to producers originally wanting to see Daisy don a miniskirt. 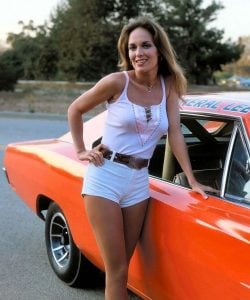 But even this compromise of sorts raised eyebrows with TV network censors, as the barely-there shorts were considered a bit too ‘revealing’ for impressionable television audiences. And I for one, can see what they meant. Every week, WITHOUT FAIL. The solution was for Catherine to wear flesh-coloured pantyhose with them, to thoughtfully save the audience’s blushes.

3. The ‘P’ in Sheriff Roscoe P Coltrane Stands for ‘Painting’…..

Despite portraying Sheriff Roscoe P Coltrane as a bumbling, hapless idiot, actor James Best couldn’t be further removed from the character he made his own. A hugely successful star prior to being cast on The Dukes of Hazzard, Best’s career later saw him bestowing his skills via the teaching of others. 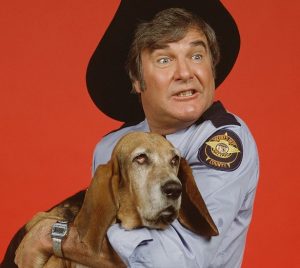 The likes of Burt Reynolds, Clint Eastwood, Farrah Fawcett, and Quentin Tarantino benefitted from Best’s wealth of experience during his tenure as a professor at the University of Mississippi. What’s more, he held a black belt in karate and was an accomplished painter in his spare time.

The story of how the General Lee acquired its ‘Dixie’ horn makes for a fascinating one in itself. As I understand it the two directors who were responsible for filming the pilot episode were enjoying their breakfast in Covington town square, when the peace and quiet was abruptly interrupted by the shrill sound of said horn emitting from a local’s car.

This incident triggered a mad dash as the directors sought to hot-foot it after the car’s owner, who once they caught up with offered to pay $300 for the very horn from their vehicle. Agreeing to the unlikely purchase, the directors proceeded to install it in the General Lee, and the rest is televisual history as they say…. 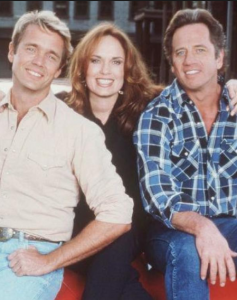 Well, kind of. At the age of just 12-years a North Carolina native began running moonshine, and when old enough to obtain a driver’s licence, started making his drops in a modified 1958 Chrysler 300D. A car quick and nimble enough to outrun the law in those there parts. 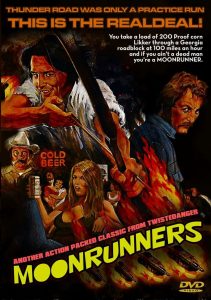 Not just that, but it was also equipped with an oil-dumping device to thwart the close company of the law enforcement officers in hot pursuit. Said tales were the inspiration behind the 1975 movie, ‘Moonrunners’, which in turn heavily influenced what became The Dukes of Hazzard. That said, there were a few significant differences, as the film was a far edgier and cruder cinematic vehicle than the family-friendly TV show which followed in its wake.

Did you know all these facts about Dukes of Hazzard? Let us know in the comments section below!