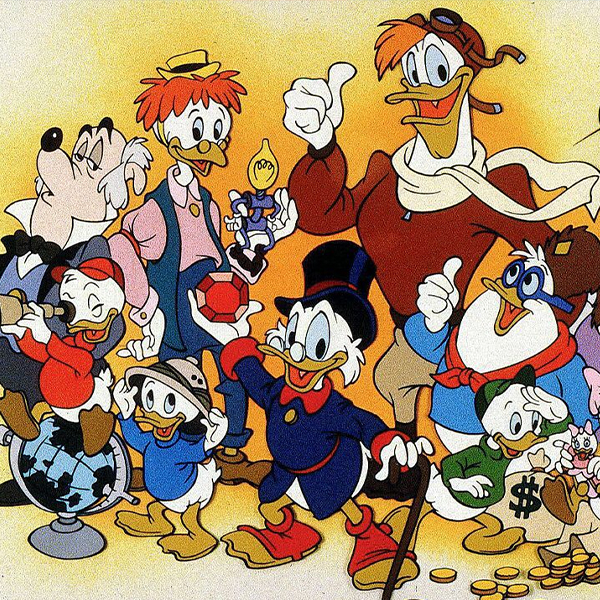 In 1928, Disney announced themselves as the reigning kings of animation with Steamboat Willie. Almost 60 years later, the studio won over a new generation of youngsters with DuckTales, an animated adventure series based around characters who, up to that point, had been somewhat second-tier figures within the Disney pantheon.

DuckTales sees Donald Duck’s nephews Huey, Dewey and Louie sent to live with their great uncle, Scrooge McDuck. The massively wealthy and grumpy Uncle Scrooge is also a bit of a daredevil, regularly taking his grand-nephews on hair-raising, Indiana Jones-esque adventures to exotic locations in search of long lost treasure. Frequently accompanying them on these audacious outings is the heroic but slightly dim-witted pilot Launchpad McQuack.

Launched in 1987, DuckTales proved a massive success with audiences, ushering in a new era for Disney on the small screen at a time when the studio’s big screen releases weren’t doing quite so well. Similarly successful Disney cartoons that came in the wake of DuckTales included Chip ‘n Dale: Rescue Rangers, TaleSpin and Darkwing Duck.

As enjoyable as the adventures of Scrooge and his grand-nephews were, DuckTales is perhaps most memorable for its incredibly catchy theme song. To this day, is it possible to say the title "DuckTales" without someone replying, “a-woohoo”?

DuckTales ended in 1990 with 100 episodes to its name. Earlier that year, spin-off movie DuckTales: Treasure of the Lost Lamp made it to cinemas. The show was rebooted by Disney XD in 2017, with ex-Doctor Who actor David Tennant voicing Scrooge McDuck.