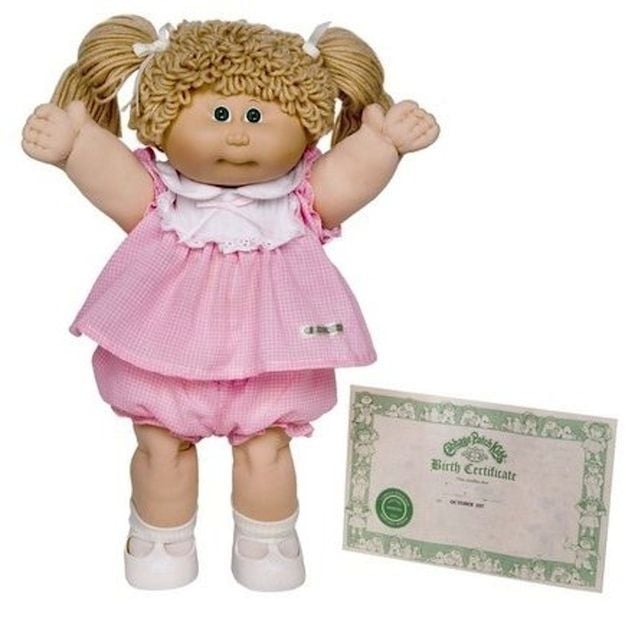 Cabbage Patch Kids is a range of soft, child-like toys created and distributed by Xavier Roberts, based on the designs of folk artist Martha Nelson Thomas. Initially registered for copyright protection in 1978 under the name 'The Little People', the dolls were rebranded to Cabbage Patch Kids when they went into mass production in 1982.

The dolls were recognised as one of the top toy fads of the 80s by Time Magazine, who wrote in 2010 that they were "the doll of the decade." In fact, there were several contemporary reports of parents getting into violent altercations over the in-demand dolls, not least because some dolls were seen as more appealing than others.

Roberts had originally made the Cabbage Patch Kids dolls purely from fabric and with his own two hands, but in 1982 licensed a smaller version of the doll with a hard, plastic face to Coleco. By interchanging the faces and bodies, Coleco was able to create a wide variety of dolls at a low cost, adding personality and collector value to the products.

It's thought that Cabbage Patch Kids and adjacent, licensed merchandise generated more than $4.5 billion of sales in the 80s alone. While merchandise sales - such as cereals and paddling pools - have steeply declined, the dolls remain popular and Cabbage Patch Kids has become one of the longest-running doll brands in the US.

In 1996, a highly sought-after line of dolls known as Cabbage Patch Snacktime Kids was pushed to market. These were designed to realistically 'eat' plastic carrots and deposit the items in a backpack. However, they were recalled after several reports of the dolls ripping out children's hair.

These Toys Were Banned For Being Seriously Dangerous

50 Childhood Toys So Dangerous They Ended Up Banned

30 Childhood Toys So Dangerous They Ended Up Banned

Which 1980s Toy Was So Popular It Caused A Riot?

11 Things We Collected As Kids In The 80s