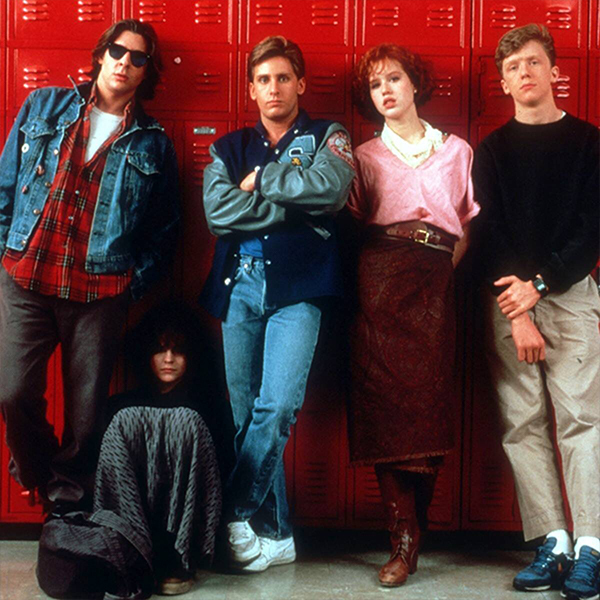 The sadly missed John Hughes had already made some waves as the writer of National Lampoon's Vacation, and with his 1984 directorial debut Sixteen Candles; but it was his second movie, 1985's The Breakfast Club, that really established Hughes as a pioneer of 80s teen comedy dramas.

Set on a Saturday morning, The Breakfast Club centres on a mismatched quintet of teens forced to come into school for a weekend detention. By chance, each of them represents a different facet of the high school social structure: a popular girl (Molly Ringwald), an athlete (Emilio Estevez), a troublemaker (Judd Nelson), a brainy nerd (Anthony Michael Hall), and a quiet loner (Ally Sheedy).

Their stern teacher (Paul Gleason) sets them one assignment: to write an essay explaining who they think they are. However, as the five young strangers get to know one another, they're surprised to find they all have far more in common than they thought.

The Breakfast Club became the cornerstone of the John Hughes teen movie brand. As well as going on to write and direct 1985's Weird Science (also starring Anthony Michael Hall) and 1986's Ferris Bueller's Day Off, he also penned the scripts for 1986's Pretty in Pink (which again starred Molly Ringwald) and 1987's Some Kind of Wonderful. All this firmly established the prolific Hughes as the king of teenage angst in the 80s.

The Breakfast Club poster, showing the five teens sat together, became as iconic as anything in the film itself; which makes it intriguing to think the cast might have looked quite different. Emilio Estevez originally auditioned for Judd Nelson's part; Nelson himself was a last-minute replacement for John Cusack; Ally Sheedy's part almost went to Molly Ringwald; and other actresses considered for Ringwald's role included Robin Wright, Laura Dern and Jodie Foster.

The Breakfast Club also made an anthem out of the Simple Minds song Don't You (Forget About Me), featured prominently in both the opening and closing sequences, and immortalised by Judd Nelson's iconic air punch in the final shot.

The Real Reason Why Ally Sheedy Turned Her Back On Hollywood