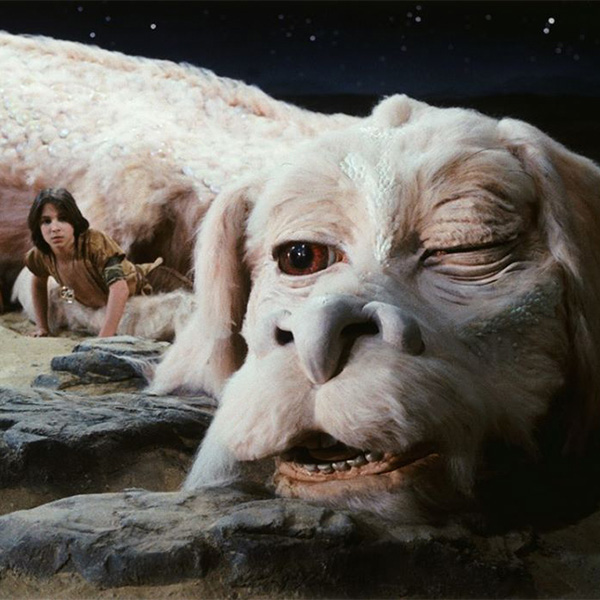 "Turn around, look at what you see..." It may be remembered primarily for the unforgettably cheesy theme song sung by Limahl (and more recently immortalised in season three of Stranger Things), but 1984's The NeverEnding Story is among the most striking, mind-bending family adventure movies ever made.

Bastian (Barret Oliver, later seen in D.A.R.Y.L. and Cocoon) is a lonely social outcast, mourning the loss of his mother and targeted by school bullies. Fleeing from his bullies one morning, he takes refuge in an old bookstore, where the old bookseller tells him of a book entitled The NeverEnding Story. Fascinated, Bastian 'borrows' the book and sneaks off to read it, and is immediately swept away into the tale of magical world Fantasia.

The story tells him of a brave young hero named Atreyu (Noah Hathaway) who is charged with finding a cure to a sickness which has befallen the Empress, whilst the world around them is slowly being consumed by a dark force known as The Nothing. However, the more Bastian reads, the more drawn into the story he becomes, until he realises it may not just be a story at all.

Although it's in English with a largely American cast, viewers may not have realised that The NeverEnding Story is actually a German production; the most expensive ever made in the country up to that point ($27 million). Adapted from Michael Ende's novel (of which it uses only the first half of the story), it was the first English language film from director Wolfgang Petersen, who would go on to make such Hollywood hits as Outbreak, Air Force One and The Perfect Storm.

While the film proved largely popular with audiences and critics, one person it didn't win over was author Michael Ende. Feeling the film did not adhere closely enough to his novel in tone or content, Ende sued the filmmakers, blasting their work as "gigantic melodrama of kitsch, commerce, plush and plastic." However, Ende lost his lawsuit, and was unable to prevent The NeverEnding Story from becoming a franchise: The NeverEnding Story II: The Next Chapter (based on the second half of the novel) was released in 1990; followed by The NeverEnding Story III: Escape from Fantasia (an original story not based on Ende’s work) in 1993.

12 Magical Facts You Never Knew About The Neverending Story!