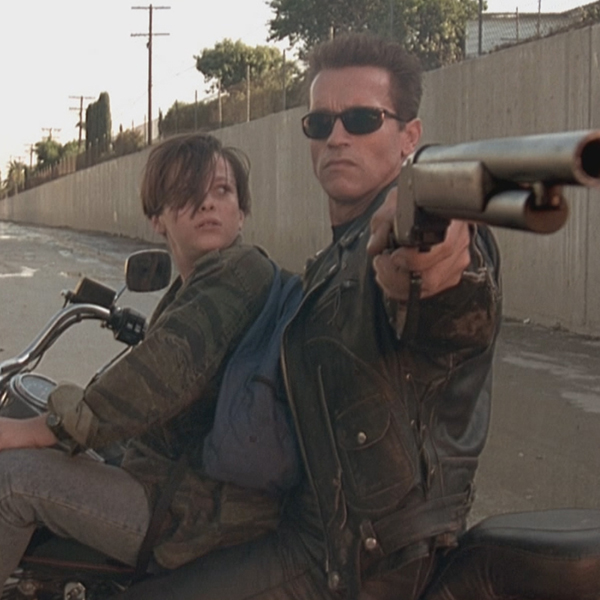 Try to remember, if you can, a time when James Cameron wasn't yet 'the king of the world,' but simply a filmmaker with a few sci-fi movies to his name, which were well-regarded but not exactly blockbusters. Things changed in a big way for the Canadian filmmaker when he made the first sequel to his 1984 breakthrough movie, The Terminator.

1991's Terminator 2: Judgment Day picks up a decade after the events of the original film. Linda Hamilton's Sarah Connor is no longer than defenceless young woman she once was, having spent a decade learning survival skills and military tactics to defend and prepare her son, future resistance leader John (Edward Furlong).

However, the machines have now sent back another Terminator, this one programmed to kill John himself as a child. This advanced T-1000 model (Robert Patrick) uses liquid metal technology to shape-shift, making it even harder to spot, let alone destroy. Thankfully, Sarah and John have help in the form of a reprogrammed T-800 (Arnold Schwarzenegger), sent back by the future resistance to protect John at all costs.

It's easy to forget that when T2 came around, Cameron was in dire need of a hit; his previous film, 1989's The Abyss, was an expensive flop. T2 was also hugely expensive: at an estimated $100 million, it was the highest-budgeted movie ever at the time. Happily, this time it paid off, as with a final haul of $520 million, T2 became the biggest blockbuster of 1991, as well as being Schwarzenegger's biggest hit ever, and the highest-earning R-rated film up to that point.

A big part of T2's success was its use of state-of-the-art CGI effects which hadn't been seen before. Drawing on FX techniques developed in The Abyss, the shape-shifting T-1000 made 'morphing' the hottest effect around in the early 90s, utilised to often-breathtaking effect, particularly when balanced with the astonishing practical stunt work.

Cameron and Schwarzenegger reunited for 1994 action hit True Lies, but the filmmaker’s fortunes really changed in 1997, when he once again broke the record for the most expensive film ever, spending $200 million to make Titanic – which promptly became the first movie to earn over $1 billion at the box office.