After tackling the question of whether Alien’s Ripley or The Terminator’s Sarah Connor was the most kick-ass movie heroine, we naturally found ourselves pondering other possible 80s movie icons we’d love to pit against one another. And, even more naturally, our first thoughts were of the two most awesome cybernetically enhanced beings in cinematic history: the Terminator, and RoboCop.

The time-traveling assassin of James Cameron’s 1984 breakthrough and the chrome-domed crimefighter of Paul Verhoeven’s 1987 smash hit have done battle before in a Sega Megadrive game and a Dark Horse comic book, yet sadly we never got to see Arnold Schwarzenegger’s T-800 and Peter Weller’s Murphy go head-to-head on the big screen. Such a fight would be the stuff of many an 80s kid’s dreams – but which alloyed action hero would be victorious?

Let’s consider how the two metallic macho men measure up with the following points – and see who, in our estimation, ends up on top. All very scientific, we’re sure you’ll agree. Well, at least as scientific as the characters themselves. 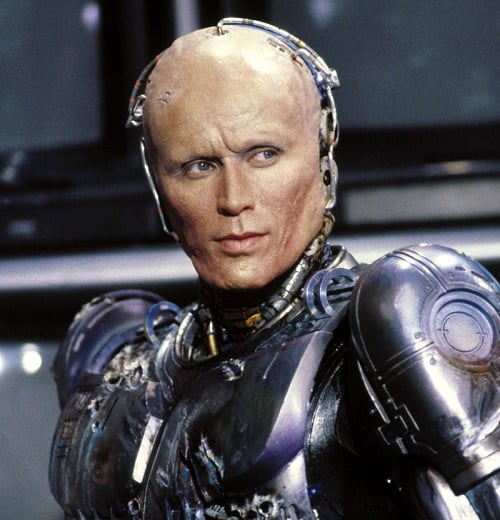 When you think about it, the Terminator and RoboCop are almost exact opposites: whilst both are technically cyborgs, the T-800 is little more than a machine designed to kill, augmented with living human tissue. On the other hand, RoboCop is a human being who, on the brink of death, is resurrected through futuristic technology and rebuilt with machine parts.

In the original 1984 Terminator, there’s never any question of feeling sympathy for the cyborg, as it’s just pure evil with an unstoppable drive to kill. However, in RoboCop’s case, we have seen the man Officer Alex Murphy used to be. We get a glimpse of the traumatic impact his murder had on his family, and we see how, despite efforts to erase his memory, the flawed and emotional man remains.

All of this makes it easier for the viewer to empathise with RoboCop – but does it necessarily give him the edge in a fight? 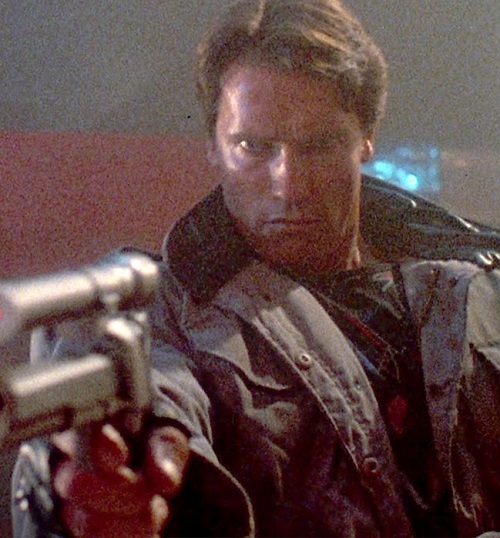 Sure, we’ve established that RoboCop is far more human than the Terminator – but that doesn’t make him any less cold-blooded a killing machine when the chips are down. In fact, given that RoboCop mostly does battle with hardened criminals and takes them out almost effortlessly – and the Terminator spends the bulk of his time failing to catch and kill the utterly inexperienced Sarah Connor – we might chalk this up as yet another win for Murphy.

However, this is not to say the Terminator doesn’t face off against some formidable opponents; he takes out an entire station full of cops, after all.

And when you actually do the numbers, it’s impossible to name one winner here, as the T-800 and RoboCop both take out the exact same number of people in their respective films: 28 kills apiece. 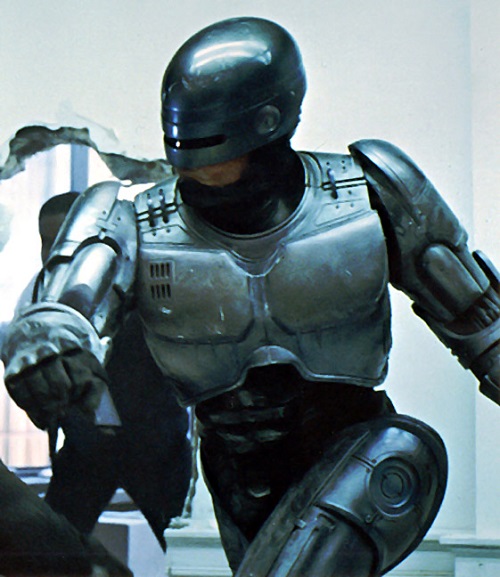 The T-800 was designed specifically to hunt and kill, but also to do so whilst appearing human. With this being the case, it’s not surprising that the film doesn’t see him perform physical feats drastically beyond the scope of a human counterpart: most of us would prefer not to smash our fist through a windshield and hold on as the car speeds along the road, but some of the stronger ones among us could probably do so if there was no other option – not that we’re in any way suggesting readers should try!

RoboCop, by contrast, has no such concerns about blending in with humanity. His design was specifically intended to strike fear into the hearts of criminals, Batman-style, and hand-in-hand with that he has physical capabilities that are completely beyond any normal person. Hence we see him bending guns with his hand and bursting straight through a solid brick wall to grab a perp like an angry Kool-Aid man.

We certainly wouldn’t want to take a punch from either, but we’re pretty sure RoboCop packs the most power in his fists overall. 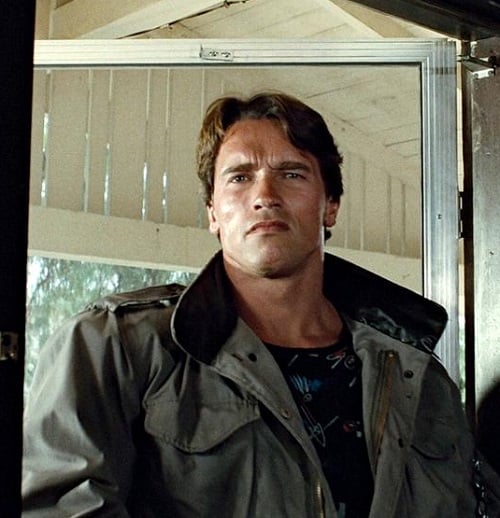 Even if RoboCop might be more powerful, and as efficient a marksman as the Terminator, there’s clearly a significant difference between the two when it comes to their programmed functions. RoboCop ultimately is there to serve and protect, so while he can be merciless when the situation calls for it, he usually doesn’t kill unless he really has to – or unless the bad guy in question really deserves it.

As for the Terminator – well, it’s right there in his name, isn’t it? His role is to terminate, and that’s what he does. With the exception of our heroine, Sarah Connor, no one who gets in his sights walks away with their life, regardless of whether they’ve done anything to warrant such treatment.

That total lack of morals and mercy is what makes the character so terrifying. 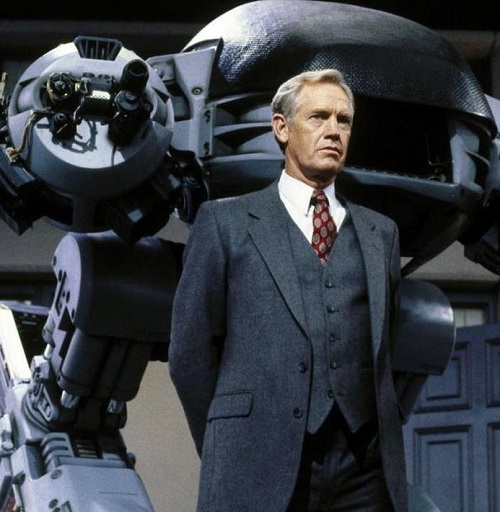 We’ve said it before and we’ll say it again: the T-800 is sent back in time to destroy one defenceless civilian, Sarah Connor, with no one standing between him and his goal but fellow time traveler Kyle Reese and a few cops. Even so, the dreaded Terminator spends the bulk of the film struggling with petty humans, and ultimately fails to kill Connor.

RoboCop, by contrast, has a veritable rogue’s gallery to fend off. On top of the average low life criminal population of Old Detroit, he’s battling arch-criminal Clarence Boddicker and his gang, plus corrupt OCP executive Dick Jones, who not only had a hand in RoboCop’s programming, but also has at his command both the ultra-lethal giant robot ED-209 and the entire Detroit Police Force.

Yet against all this, RoboCop emerges victorious, whilst the Terminator can’t manage to kill one 80s waitress with a perm. 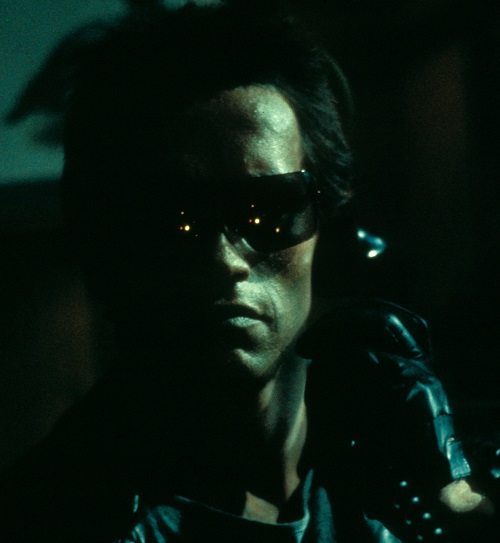 Regardless of whether or not we agree with the Terminator’s objective (and, obviously, we’re not supposed to), there can be little question that the mission he has been sent back in time to accomplish is of the utmost significance. Killing Sarah Connor, and thereby eradicating future human resistance leader John Connor, could mean changing the outcome of the future war, and completely rewriting the ultimate fate of the entire human race.

As for RoboCop… well, he’s been built by a mega-corporation to reduce crime and thereby increase their profit margin, whilst making it easier for them to rip down Old Detroit and build the shiny and new Delta City in its place, which also means more money for them.

Sure, RoboCop manages to get back in touch with his humanity and follow his own sense of right and wrong, but it doesn’t change the fact that, ultimately, he was built in order to help an already-rich conglomerate keep getting richer. Which, anyway you cut it, isn’t as significant a role as that handed to the T-800. 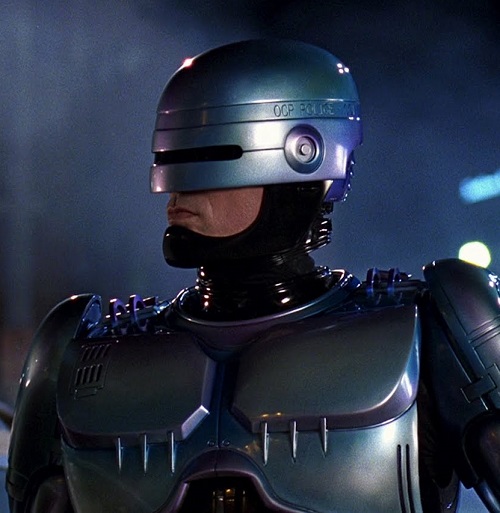 This is another one that’s simply too close to call. The Terminator and RoboCop both remain iconic well over 30 years since their first appearances. It’s not only because their movies are great, but because the characters themselves both look awesome.

In many respects that’s fortunate for the Terminator, given that he looks human: that sunglasses and biker jacket combination has a timeless coolness about it. Can you imagine if they’d tried to give him a more contemporary mid-80s look, like a Miami Vice pastel suit paired with a mullet?

But while the Terminator’s look (with his original, fully human exterior, at least) isn’t too hard for us average Joes to copy, there’s no imitating RoboCop – unless you’re an absolute cosplay master, that is. His shiny chrome casing, imposing stature and sleek visor still make him look jaw-droppingly cool all these years later. 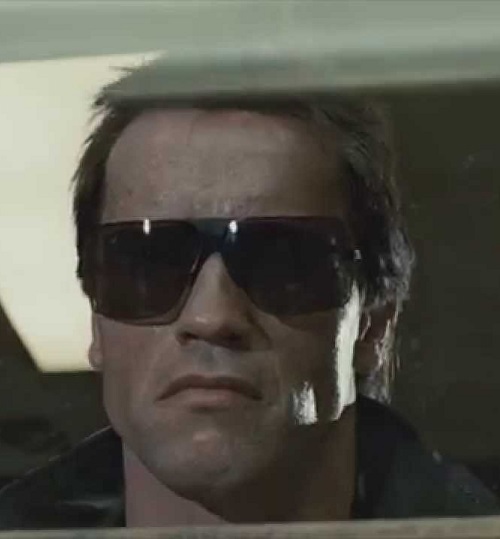 This one’s a bit of a no-brainer, but let’s not sell RoboCop short here: he has a few great, quotable one-liners up his metallic sleeve in “your move, creep,” “come quietly or there will be trouble,” and “dead or alive, you’re coming with me.”

Let’s be honest, though; the most quotable lines from 1987’s RoboCop are not delivered by the title character himself. Most fans are more likely to break out ED-209’s “you have twenty seconds to comply,” or any number of lines from Kurtwood Smith’s villainous Clarence Boddicker – such as when he oh-so politely asks those women to leave. Ahem.

However, none of these lines hold a candle to the sheer iconic power of the Terminator’s unforgettable three-syllable utterance: “I’ll be back.” Within the context of the scene, it seems such a throwaway line, yet it has long since come to define not only the character but Arnold Schwarzenegger himself, who has repeated it umpteen times in other films over the years (which is not to say Arnie doesn’t have more than his share of other great one-liners). 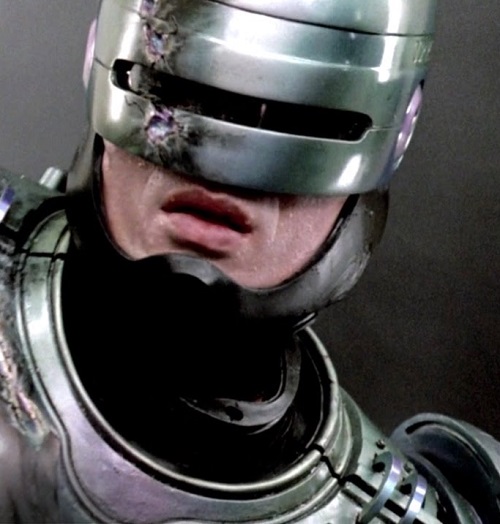 The Terminator and RoboCop are both tough hombres, no two ways about it. As well as dishing out the firepower in huge capacities with far greater accuracy than your average human, the cyborg shooters are also capable of withstanding a huge amount of damage, taking shots from all angles without even slowing down, let alone being incapacitated.

Even so, by the end of his movie, the Terminator is reduced to a crawling robo-skeleton torso and finally crushed in an industrial press; whereas RoboCop, though he takes a bit of a hit and voluntarily removes his helmet, makes it out of his movie with all his functions intact, ready to fight another day.

That being the case, it’s surely RoboCop who emerges as the toughest of the two of them. 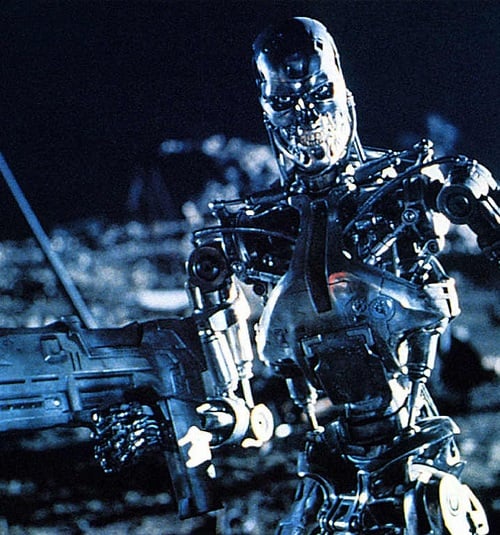 James Cameron’s The Terminator and Paul Verhoeven’s RoboCop are both indisputable, solid gold 80s classics which rank among the very best movies ever made in the science fiction genre. As for their sequels, well, 1991’s Terminator 2: Judgment Day arguably improves on the original in every regard, and it had a major impact on the face of action cinema and sci-fi in the 90s.

1990’s RoboCop 2, however… well, the best that can be said of that is that it certainly isn’t as bad as it could have been. And we know this because 1993’s RoboCop 3 is, to be blunt, an outright disaster, primarily because it waters things down for a PG-13 rating and didn’t have the budget to fully realise its more ambitious (and rather silly) vision. Jetpacks and robot ninjas are expensive.

Neither franchise has fared so well in recent years: most of us would like to pretend the last four Terminator movies hadn’t happened, let alone the 2014 RoboCop remake. But with two bonafide classics to his name as opposed to RoboCop’s singular masterpiece, Terminator definitely wins this round.

So the final tally has it as four points to RoboCop, four points to the Terminator, and two draws. This might be called an even tie – but all things considered, we’re leaning towards giving the victory to RoboCop.

He takes more of beating, battles considerably tougher opponents, and emerges victorious at the end – none of which can be said of the Terminator, even if he had the bigger mission, the more iconic one-liners and a better sequel.

So there you have it: in our estimation, RoboCop is the toughest 80s movie cyborg. Your move, creeps.