1991’s The Addams Family has long been celebrated for its gleefully ghoulish sense of humour, but the movie’s most macabre moment actually occurred when the cameras weren’t rolling.

Strange but true: Raul Julia, who plays Gomez Addams in The Addams Family, was forced to take several days off shooting the film to recover from an accident that caused his eyeball to fall out of its socket. It was just one of the (for want of a better term) eye-opening mishaps to occur during production on the dark comedy classic. 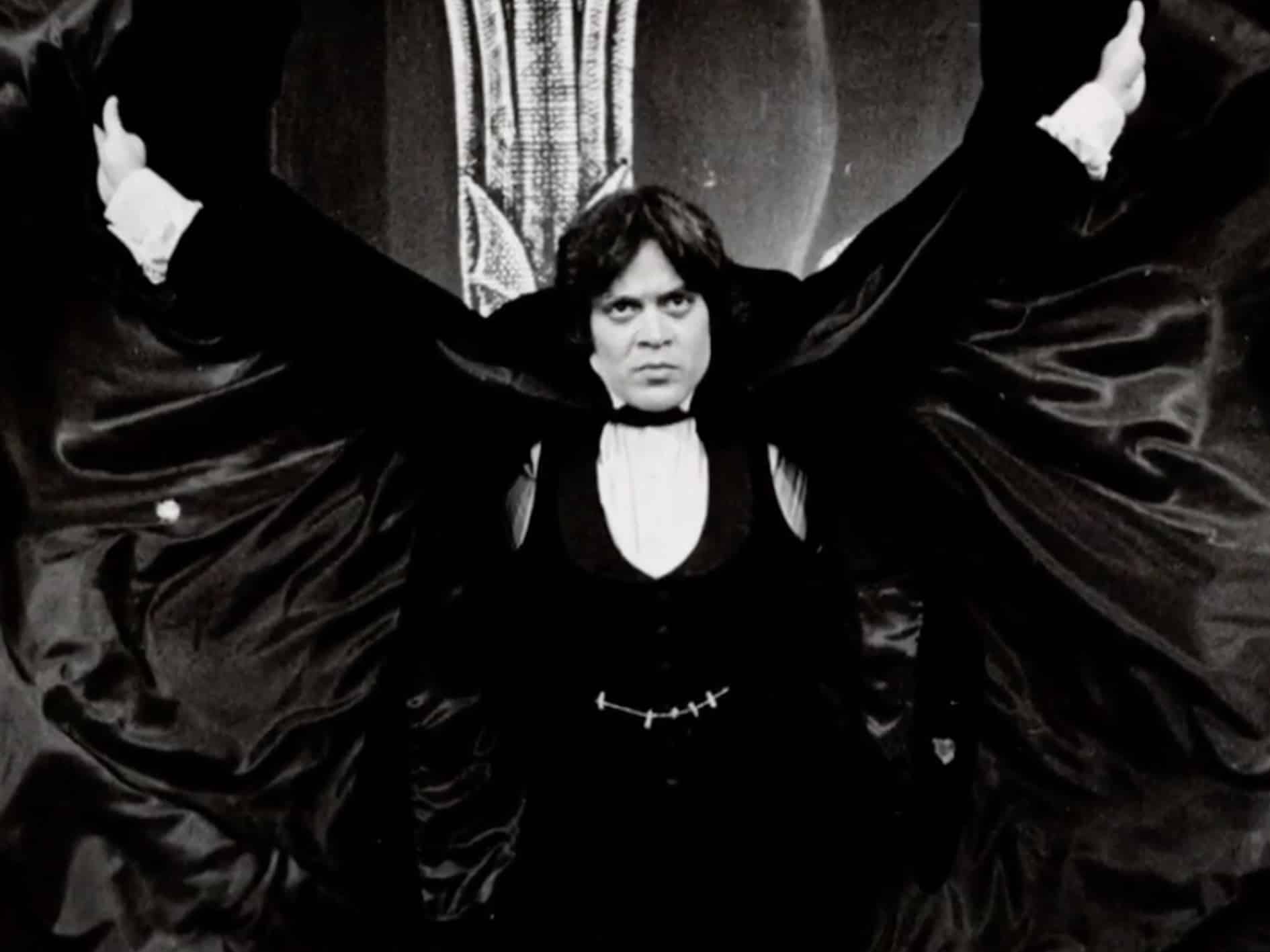 Born March 9, 1940 in San Juan, Puerto Rico, Raul Julia’s acting career first took off in the mid-60s when he moved to New York to pursue a stage career. Until the late 70s, Julia worked predominantly in theatre, bagging only occasional film roles (notably, he appeared in 1971’s The Panic in Needle Park alongside Al Pacino).

Enjoying huge success on Broadway in shows ranging from Dracula to Shakespeare to musicals, Julia was noted for his larger-than-life exuberance – and, not for nothing, his large and expressive eyes. (Contrary to what some seem to think, Julia’s eyes were both his own; he did not have a glass eye.) 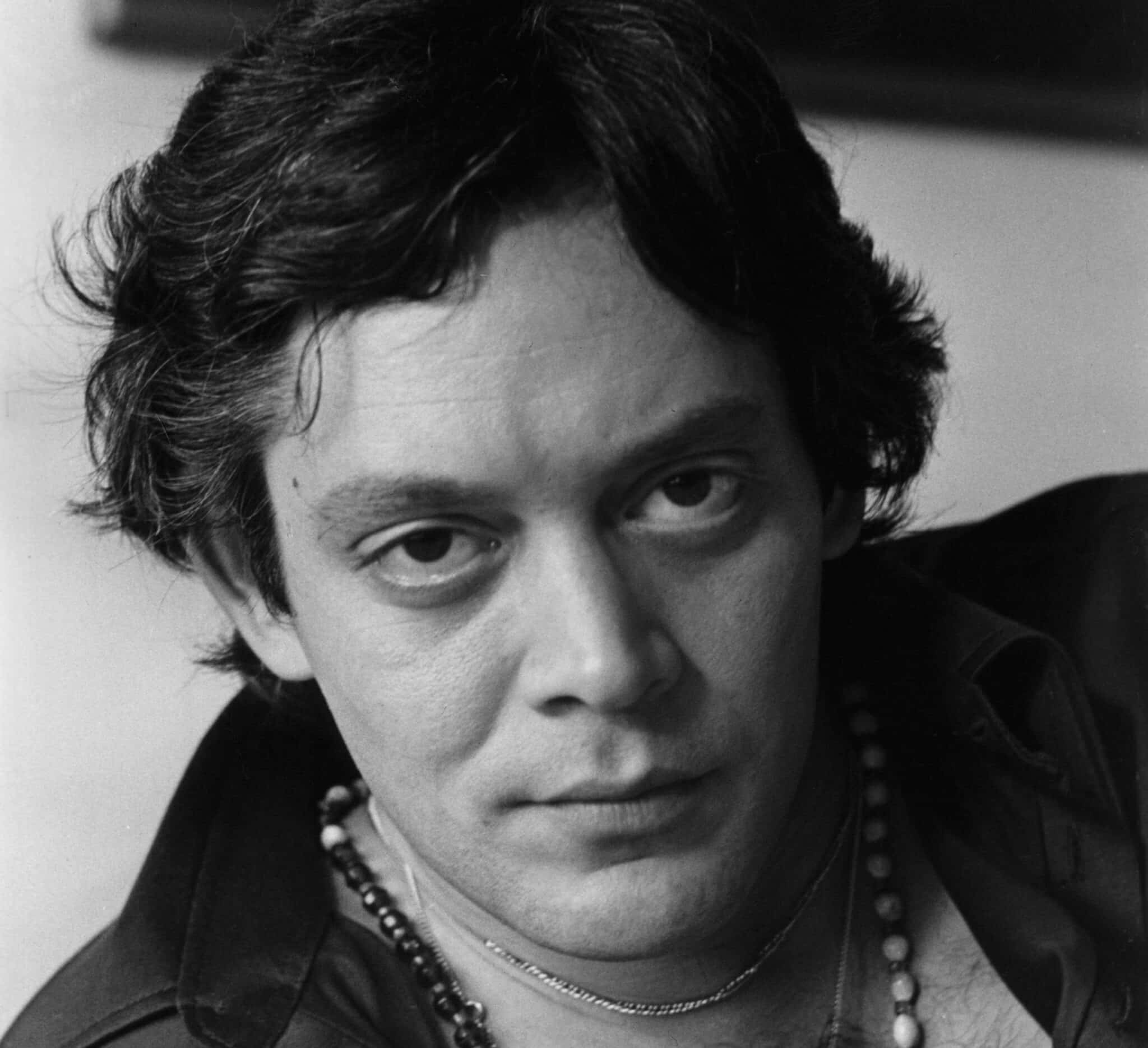 Julia soon established himself as a powerhouse in film as well, following notable performances in films including Kiss of the Spider Woman and Tequila Sunrise. This led to him being cast as Gomez Addams in The Addams Family, the first big screen film based on the comic strip creations of artist Charles Addams. These characters had already been immortalised in the 1960s sitcom, which starred John Astin as Gomez.

Once it hit cinemas, The Addams Family proved a big hit, but this was by no means a sure thing when cameras were rolling. The production was hit by all manner of problems behind the scenes, including studio Orion being on the brink of bankruptcy, first-time director Barry Sonnenfeld struggling with nerves and the film’s leading man suffering a bizarre injury. 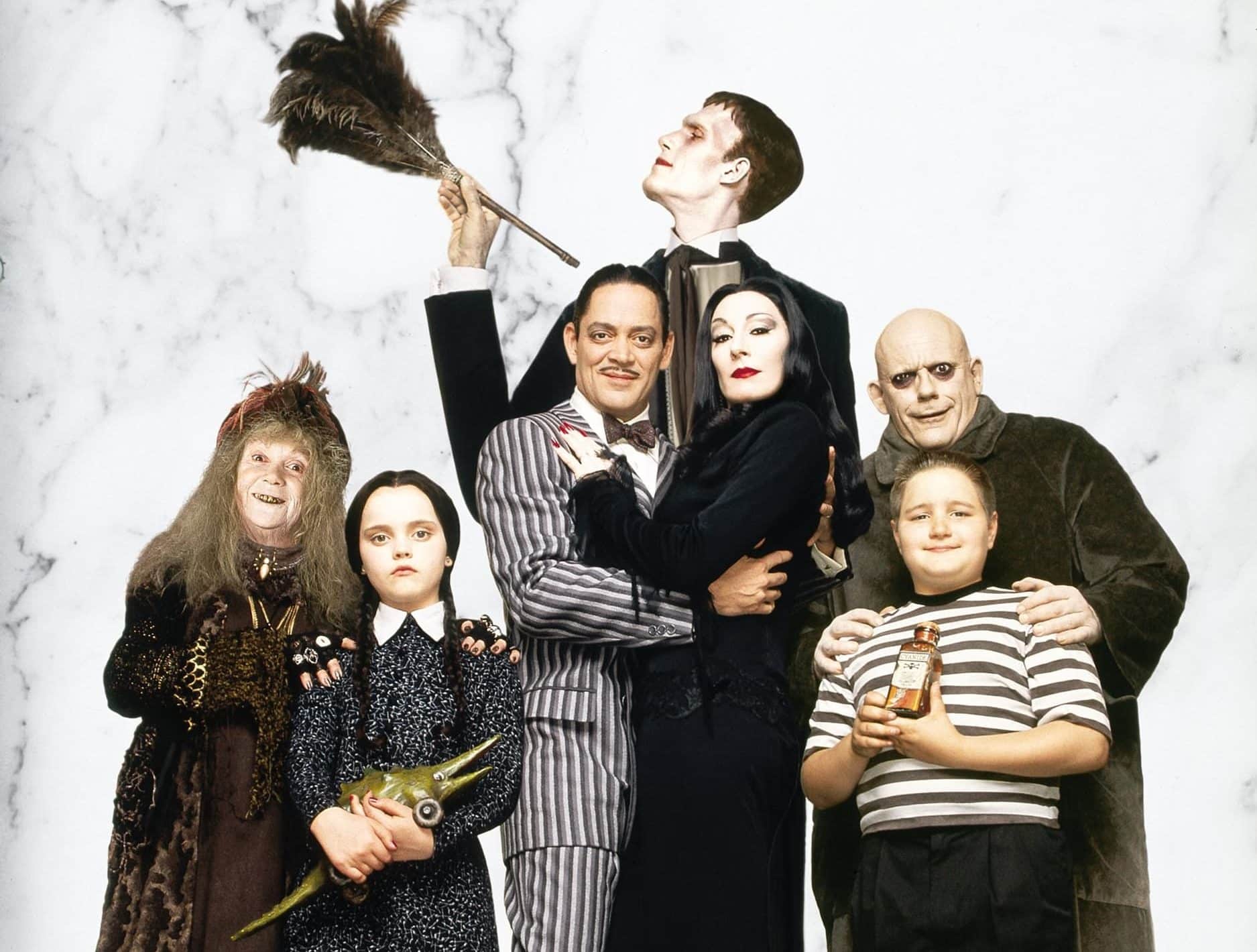 Writers and colleagues have always remarked upon Julia’s prominent eyes. In 2019, PBS’s Tiffany Vasquez recounted how “Meryl Streep once said that everything about Juliá was big – his eyes, his smile, his voice; his presence.”

As the Addams Family shoot proved stressful for everyone, the cast had clearly earned a bit of R&R – Julia included. However, one of Julia’s days off took an unexpected turn when, under somewhat mysterious circumstances, he came close to losing one of those famous eyes. No one seems 100% sure what happened. 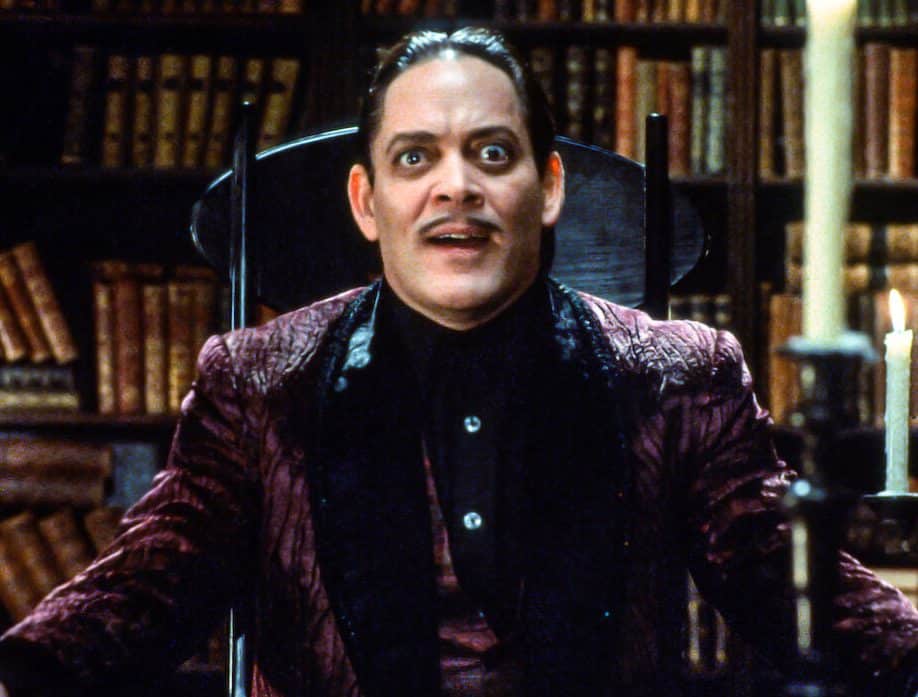 Director Barry Sonnenfeld recalls, “One day we couldn’t shoot because the white of [Julia’s] eye was totally red, and I asked what happened. He said, ‘Here’s the weirdest thing: I was at the hotel bar last night and next to me was Christopher Walken. And I love him!’

“‘We were talking, and I got so excited, my eyeball popped out of the socket and landed on the bar table! So I picked it up off the bar table and I put it back, but I must have scratched it!’”

Sonnenfeld himself expresses scepticism over Julia’s story (“To this day, I don’t know what happened”, the director says), but others have vouched for its veracity. For one, Julia’s co-star Anjelica Huston says it really happened, although in her version of events the celebrity Julia met at a bar was singer Robert Palmer. 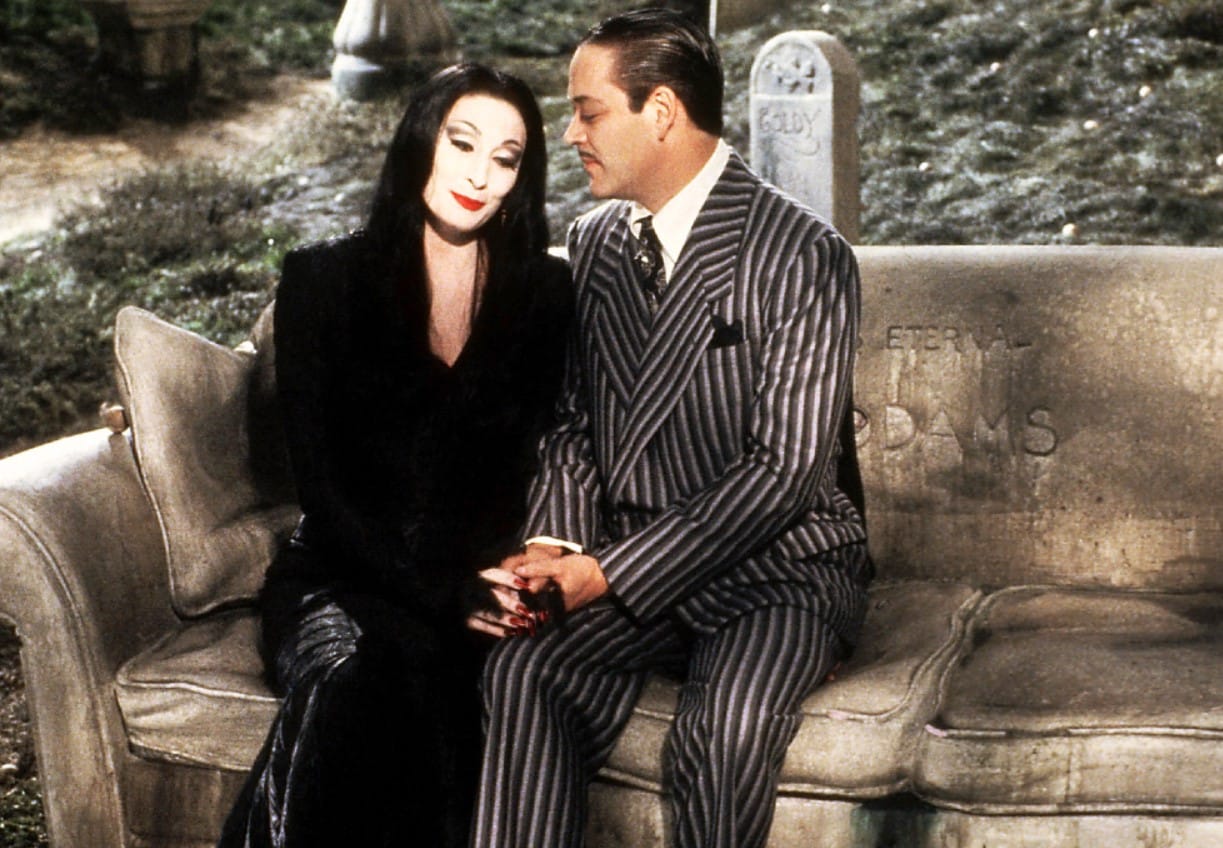 In a suitably morbid fashion for the actress portraying Morticia Addams, Huston made the somewhat horrific incident the subject of a practical joke when Julia returned to the set.

Huston recalls: “I called up the nearest joke shop on Hollywood Boulevard and said, “Do you have those fake dangling eyeballs?’ I bought out the shop. So the next day, everyone on set had these fake eyeballs coming out of their head.” 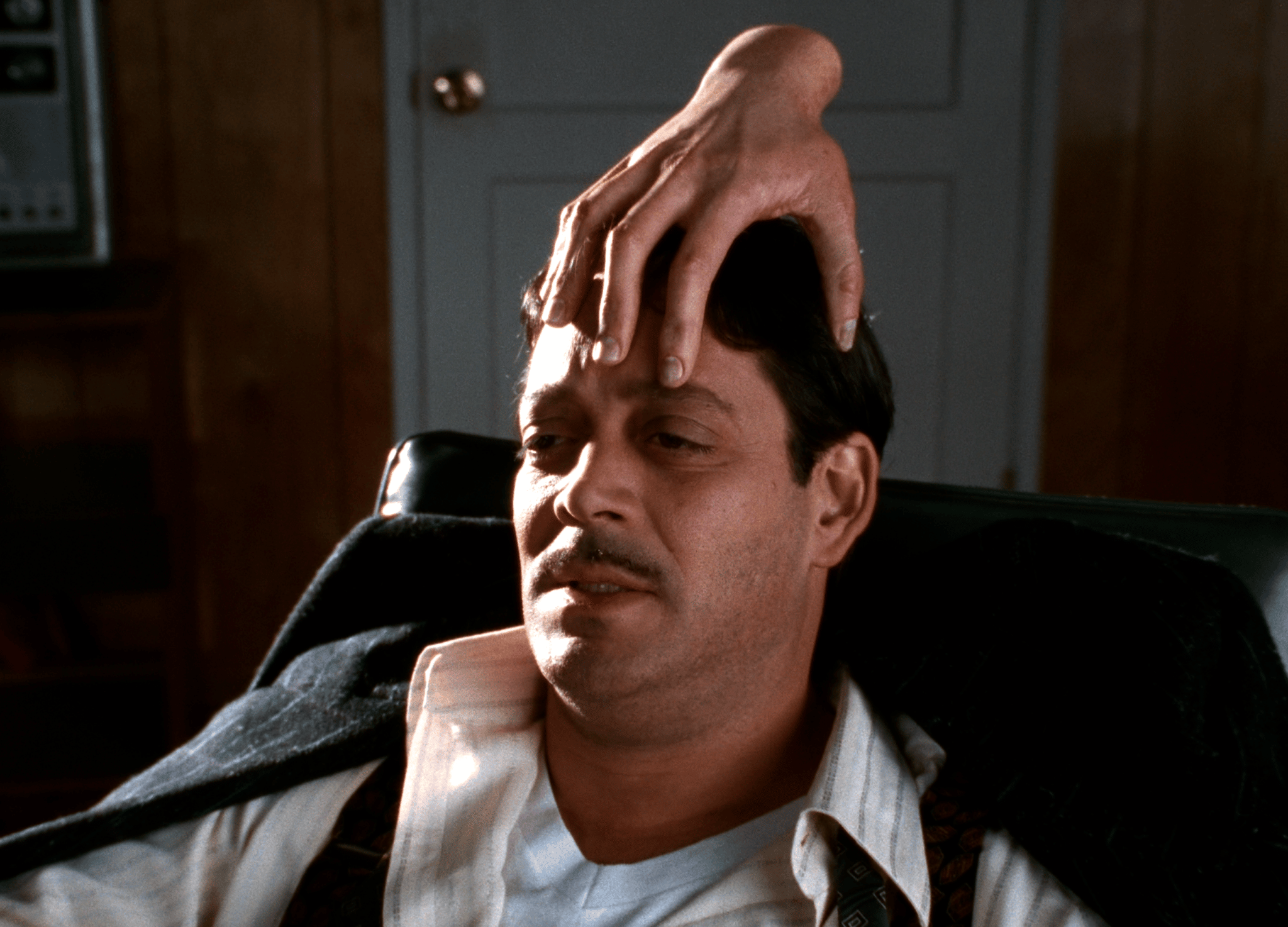 More mishaps would occur before production wrapped, but it all came to a happy ending when The Addams Family opened in November 1991. The film was met with enthusiastic reviews and made over $191 million at the box office, paving the way for sequel Addams Family Values in 1993.

Julia would declare Gomez Addams to be his favourite role, but sadly it proved to be one of his last. The actor had been secretly battling stomach cancer for several years, and around the time Addams Family Values was released, his condition worsened. 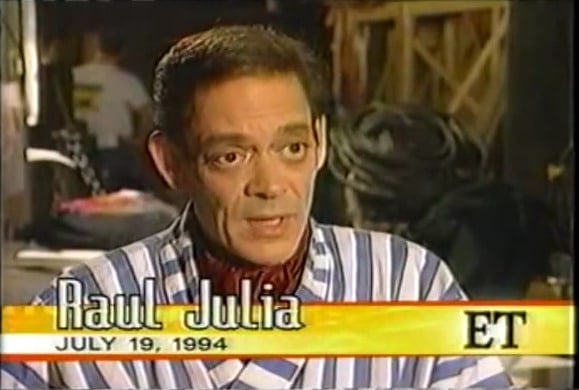 Not long after completing work on his last film Street Fighter, Julia suffered a stroke, went into a coma and died several days later, on October 24, 1994.

Gomez Addams has appeared on screen a number of times since, portrayed by Tim Curry in the direct-to-video movie Addams Family Reunion, and voiced by Oscar Isaac in the recent animated Addams Family movies. Next, Luis Guzmán will play the role on the Netflix series Wednesday.

Still, it’s hard to see anyone ever really embodying the role the way Raul Julia did. Barry Sonnenfeld remarks, “He was born to play Gomez. The character loves life, loves death, loves pain, loves joy, loves his family. The great thing about Raul as Gomez, you can see the joy whether he is happy or angry or sad, he is still joyfully full of life.”