The True Value Of Your BraveStarr Toys In 2022

BraveStarr was released in September of 1987, and instantly caught the attention of cartoon fans with its bizarre premise of prospectors and cowboys on the planet of New Texas, doing battle with undead sorcerers, alien races and robots.

Though it only ran for a year, BraveStarr toys quickly gained a reputation for being more detailed and high-quality than competitors, which has led to huge secondhand demand that still exists today. Got an old Tex Hex or Marshal BraveStarr tucked away? Then this is how much they could be worth today! 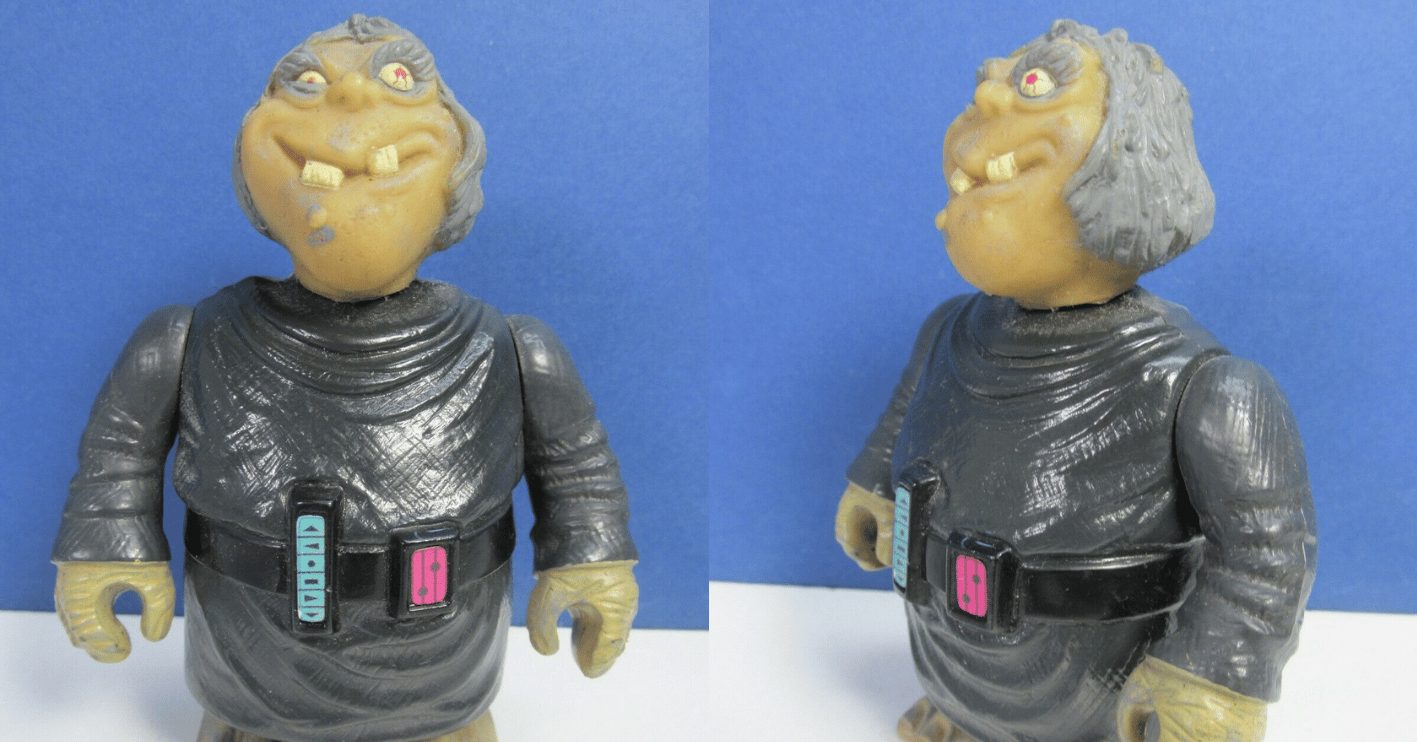 One of the most interesting things about BraveStarr as a cartoon is that it explores how two similar people can end up set on completely different paths from each other, just because of the choices they make. Outlaw Suzz is a good example of this, as he’s both an evil henchman and prospector, and the cousin of Deputy Suzz, the embodiment of law-abiding good.

Scuzz is a fairly minor character, and he’s also not much to look at, so it makes sense that he’s one of the cheaper action figures on the resale market. There’s only a one-dollar difference between the boxed and unboxed versions of the toy: $15 for the former and $14 for the latter. 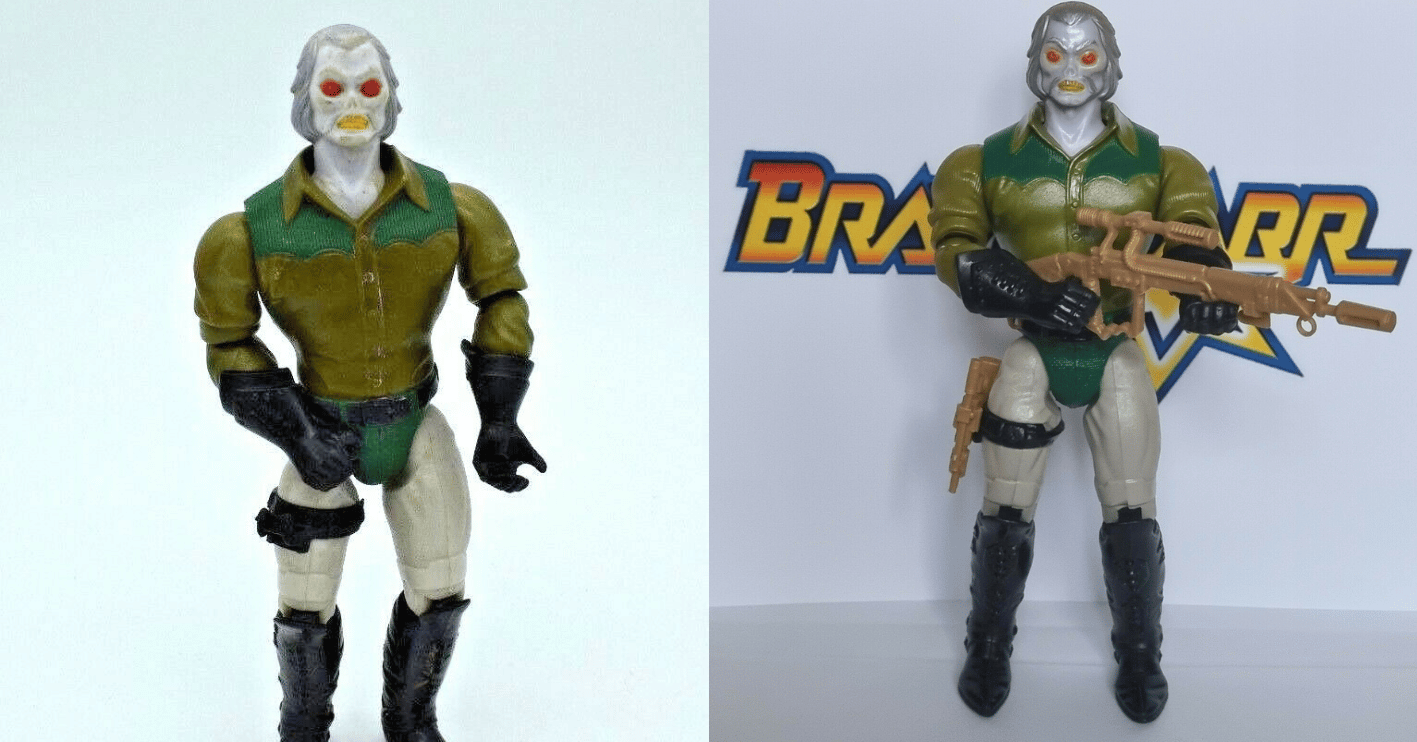 As the name suggests, Tex Hex is a former evil human prospector who is also Marshal BraveStarr’s arch-enemy. He dies when crashing on the surface of New Texas, and is raised from the dead by Stampede, a demonic entity who bestows upon him undead sorcery powers. Creepy, right?

Like most BraveStarr action figures, Tex Hex comes with accessories: a hat and a gun. Without these, and out of the box, a Tex Hex action figure will set you back just $14. With the gun but without the hat, which seems to be the most common, the price rises to $19. However, if you’re lucky enough to have one still in the box, you could be sitting on a cool $119. 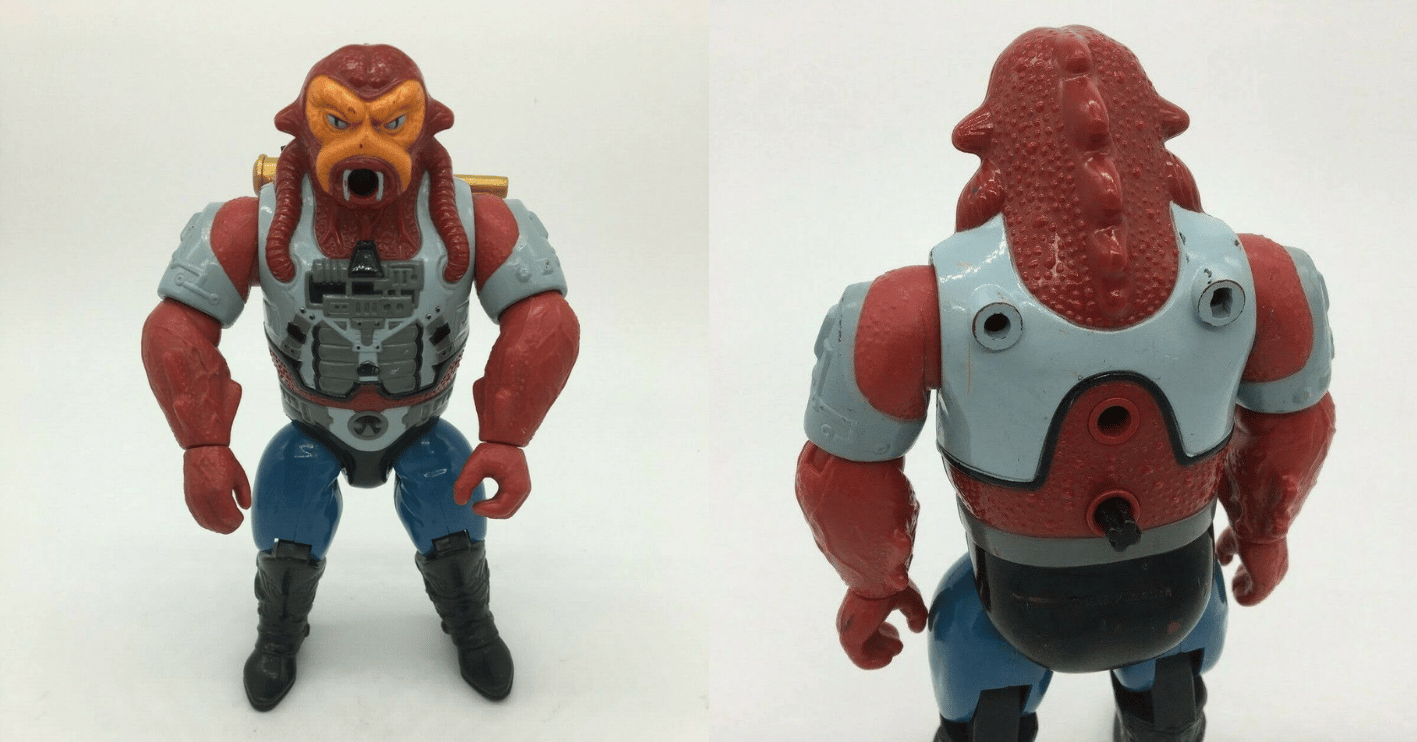 Despite being a cartoon from the 80s designed to sell toys, BraveStarr has some of the most varied villains of any show. In addition to an undead sorcerer who draws his power from a demon and a conniving robot gunslinger, there’s also Sand Storm: a red reptilian alien who can put people to sleep and conjure evil creatures.

Sand Storm is another character with a signature accessory: a golden gun that clips onto his back. Most secondhand listings seem to forgo the gun, no doubt due to it being lost, which drops the price down to just over $20. With the gun, the price increases to $59. 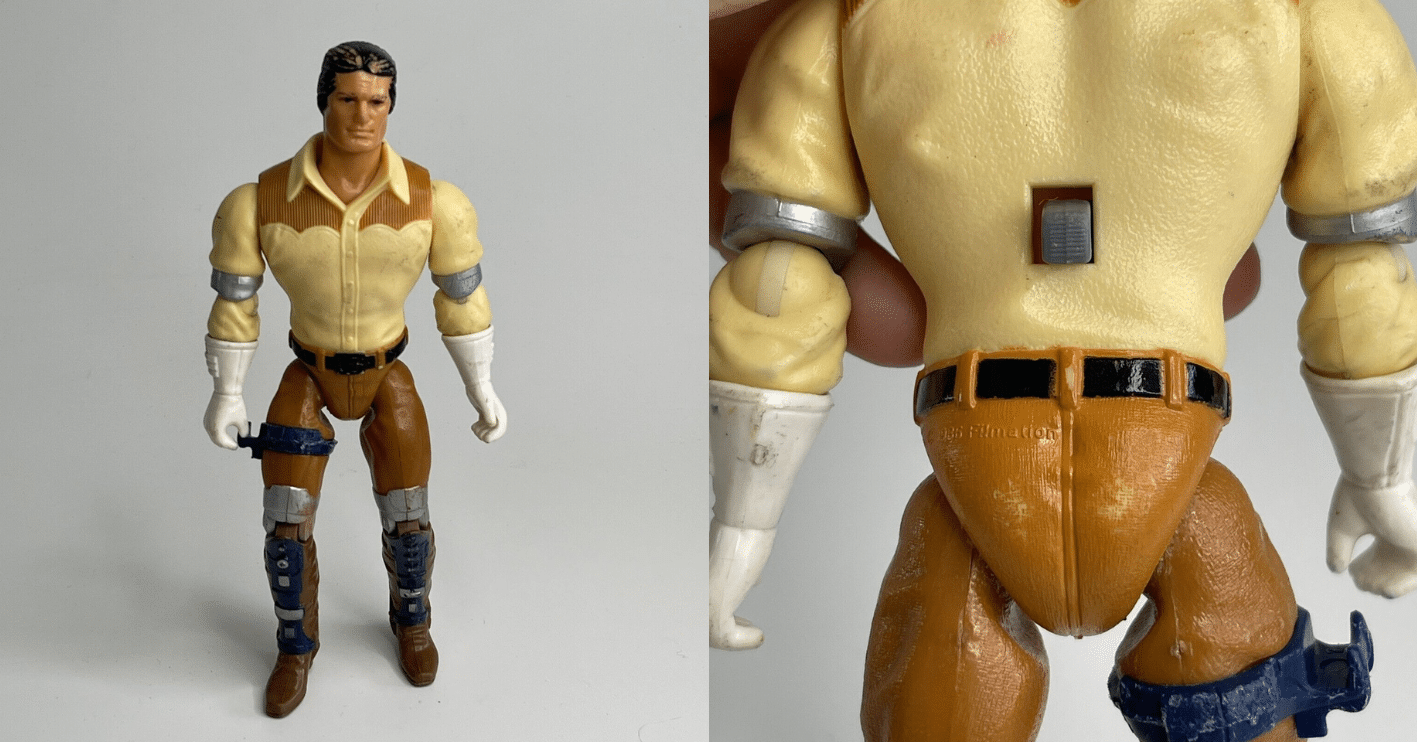 Obviously, this list couldn’t be written without including Marshal BraveStarr, the protagonist of the whole show. A Native American cowboy who travels to another world in order to become the marshal of New Texas and a heroic leader, he spends the cartoon saving the day again and again. As such, no kid could have a BraveStarr collection without him.

Unfortunately, his ubiquity also means there are plenty of his action figures on the resale market, especially without boxes. This means that while loose action figures fetch just $23 secondhand, boxed Marshal BraveStarrs are sitting pretty at $246! 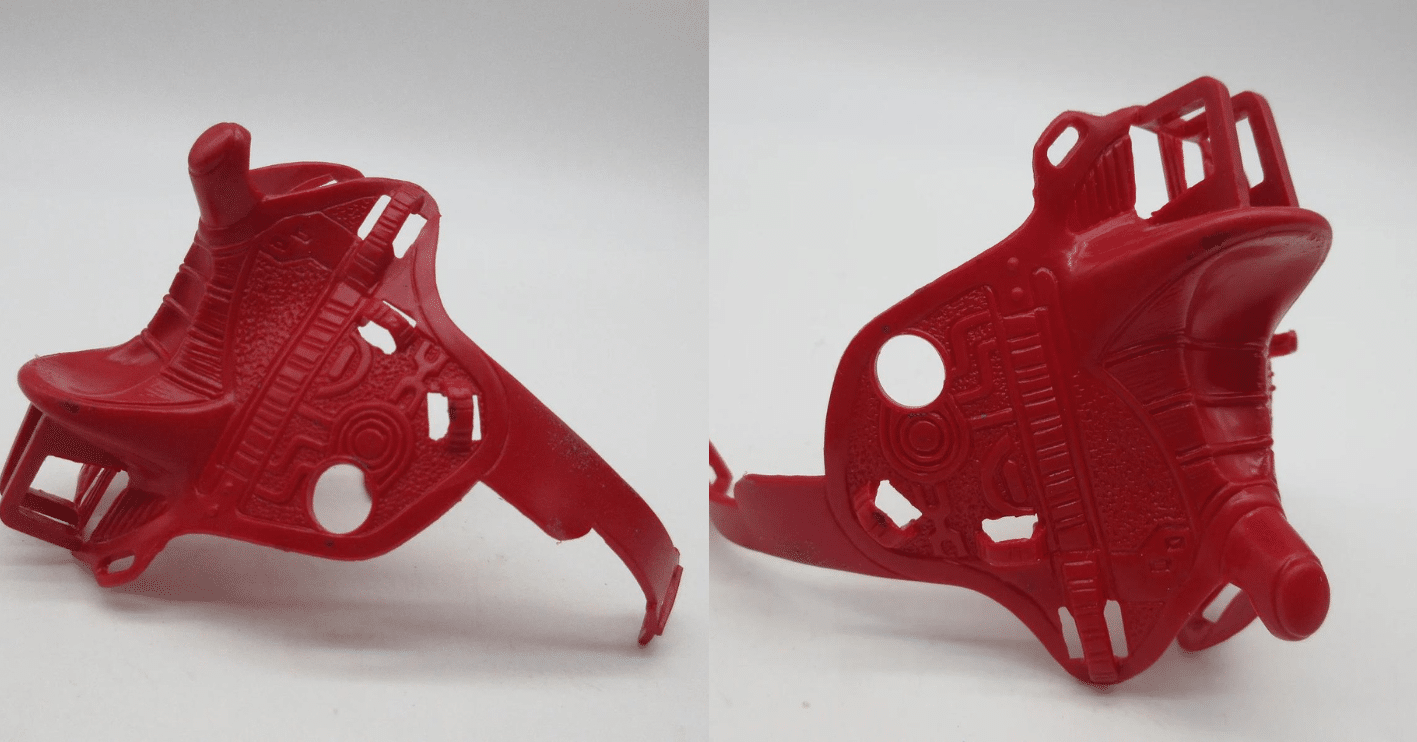 Every hero in a Western or Western-inspired media has a steed, and Marshal BraveStarr is no different. His horse is called Thirty/Thirty, and Marshal spends at least a few moments in every episode racing to save the day on the back of his trusty companion. Kids obviously wanted to recreate this in play, so a saddle was made that Marshal BraveStarr could slot into perfectly. 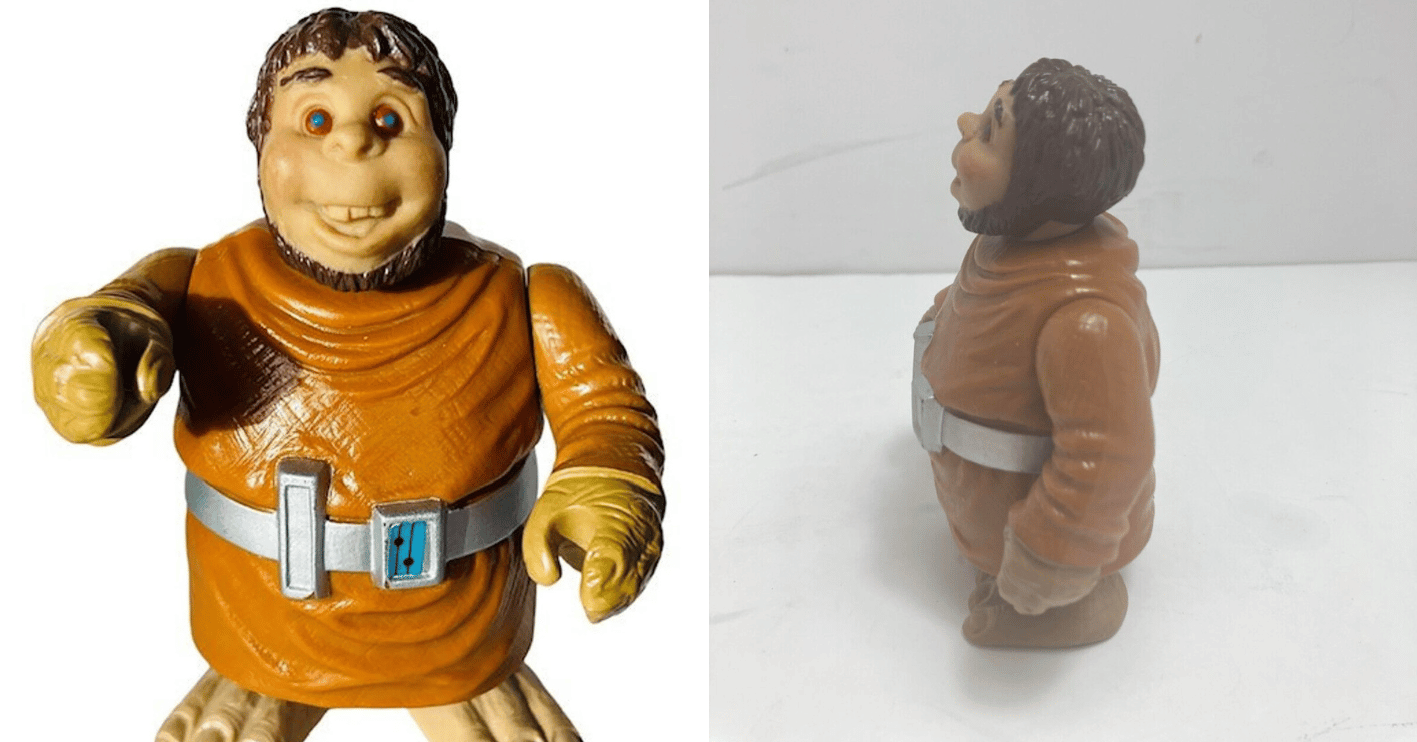 As we’ve already discussed, there are two different Prairie People in BraveStarr that are pretty superficially similar. Both Scuzz and Fuzz wear the same loose robes, have the same short, squat bodies and even have the same blood, given that they’re cousins! However, unlike Scuzz, who is the righthand man of Tex Hex, Deputy Fuzz is second-in-command to Marshal BraveStarr.

Like many other BraveStarr action figures, a Deputy Fuzz will run you around $23 on the resale market. They are listed fairly often but are very rarely still in the box. 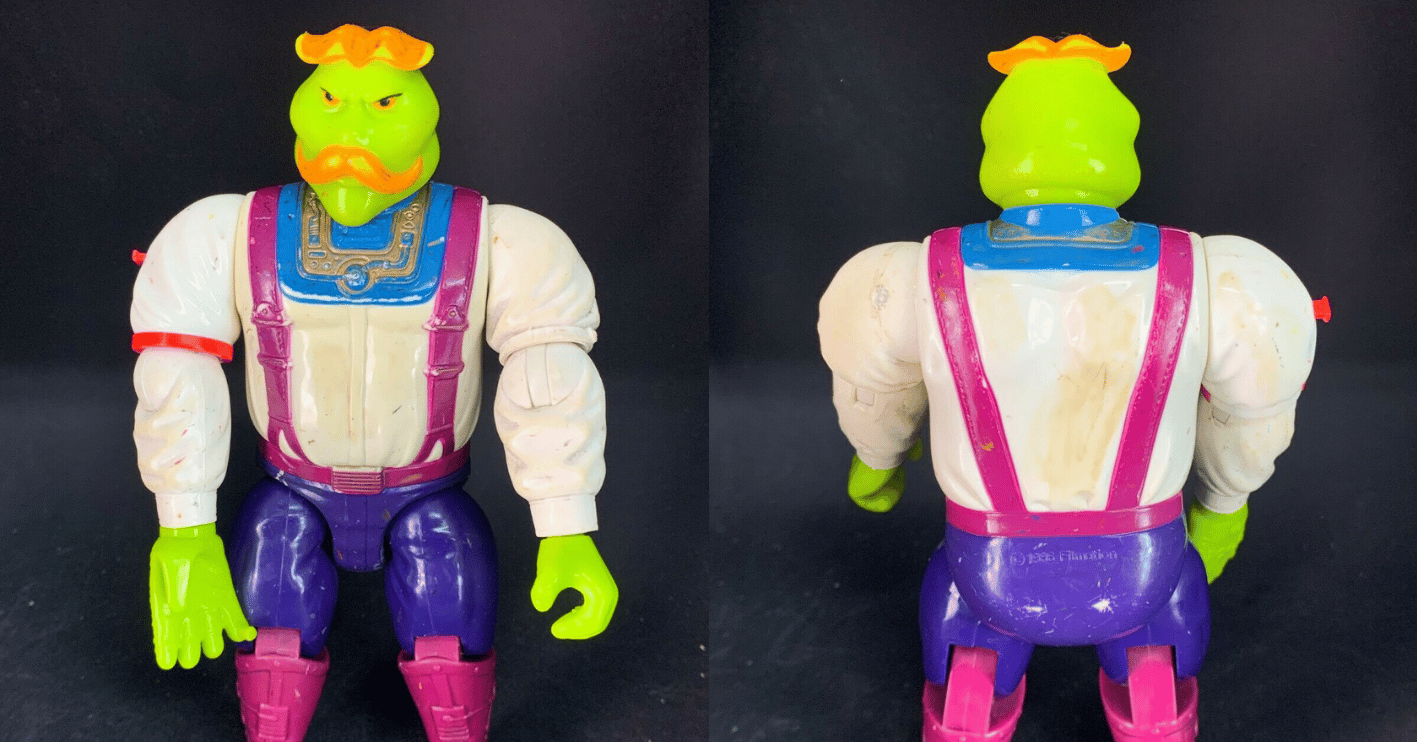 The villains of BraveStarr aren’t the only zany characters in the show; the hero’s allies are also pretty wacky. The most visually striking of them all is Handlebar, a Rigellian former space pirate who turned over a new leaf and begins running the Trading Post. Despite his intimidating presence and criminal past, he often stands with Marshal BraveStarr against evil.

Handlebar is not a super popular character, but plenty of his action figures have survived long enough to make it onto the resale market. As a result, you can pick one up for $26! 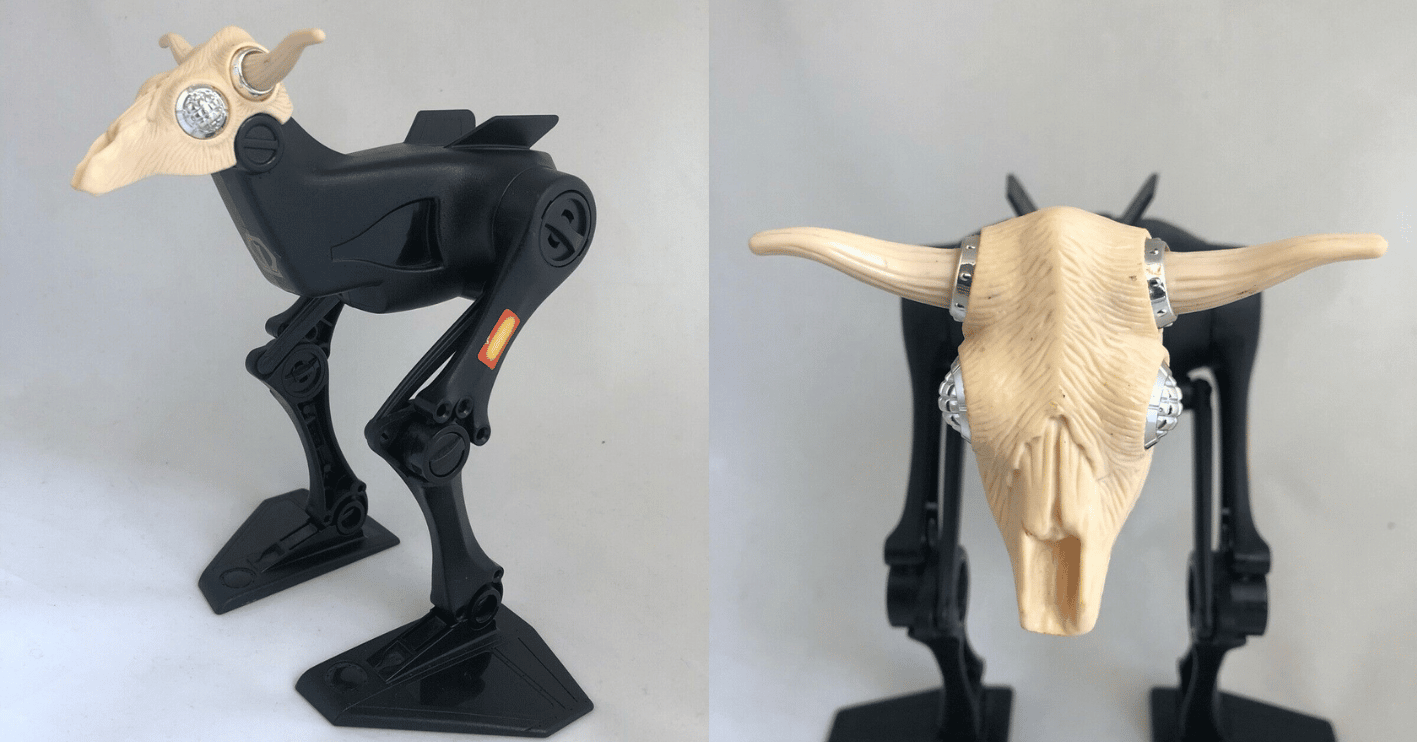 Marshal BraveStarr might have a horse called Thirty/Thirty, but Tex Hex has a Skull Walker. These weird bipedal creatures, of which Tex Hex has a whole battalion, are too cute to be scary or intimidating, but there’s no denying that they’re super cool. As a result, every kid wanted one to complete their own play.

Skull Walkers are harder to find than most of the major action figures, and you can expect to pay $35 for one out of the box on the resale market. The price rises steeply to $95 if the Skull Walker is boxed and factory sealed, but those versions are not for playing with! 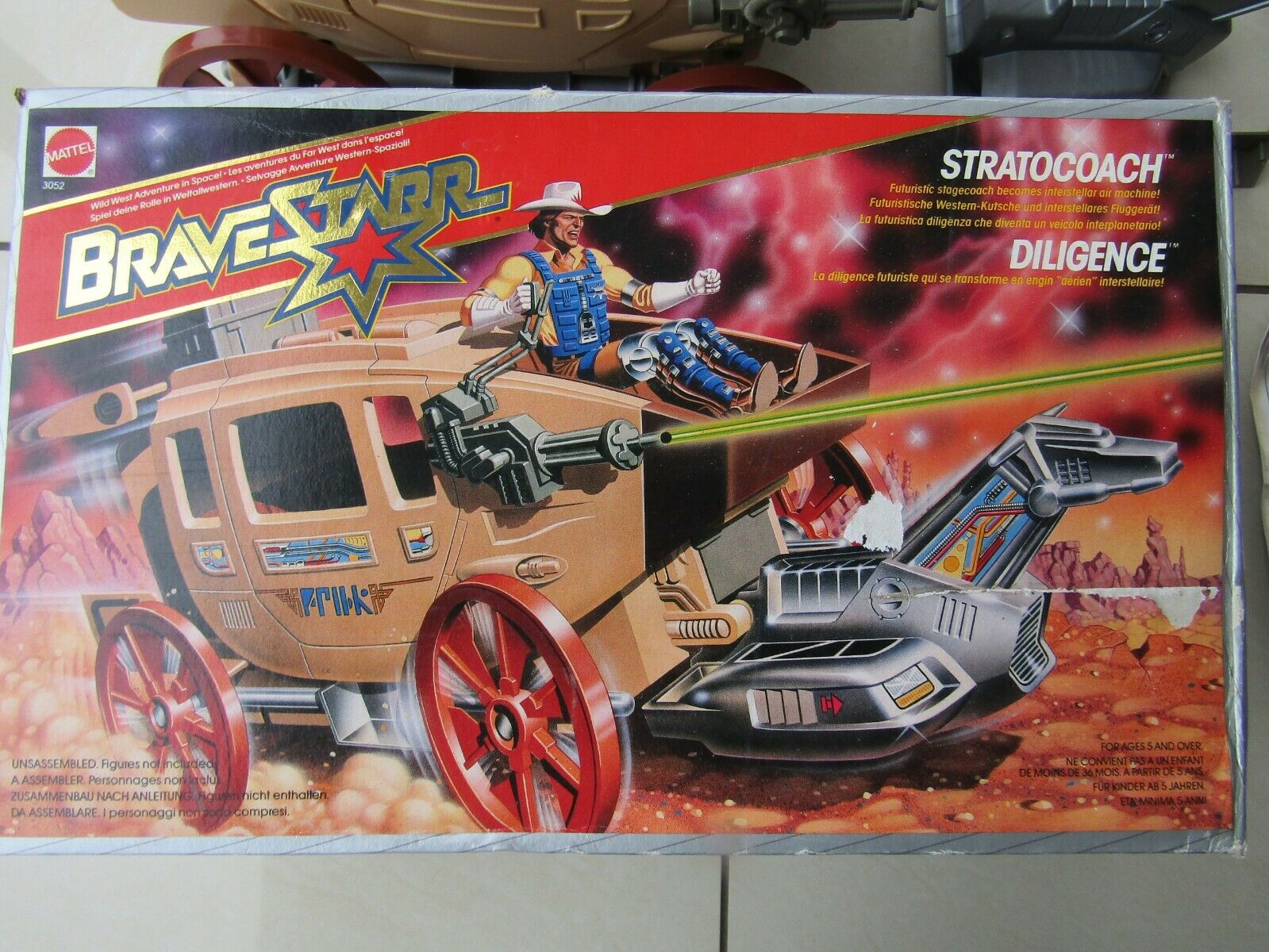 No toy set, whether from the 80s or otherwise, is complete without vehicles. Some toylines, like Hot Wheels and Transformers, are even themed totally about modes of transportation. For BraveStarr, the coolest way of getting around is the Stratocoach, a super tech stagecoach that’s the only way to get around the alien dessert.

Normally, larger pieces like vehicles or settings are more expensive than individual action figures, but that doesn’t seem to be the case for this coach. Not many are listed on resale sites at any one time, but when they are, their price sits at around just $49. 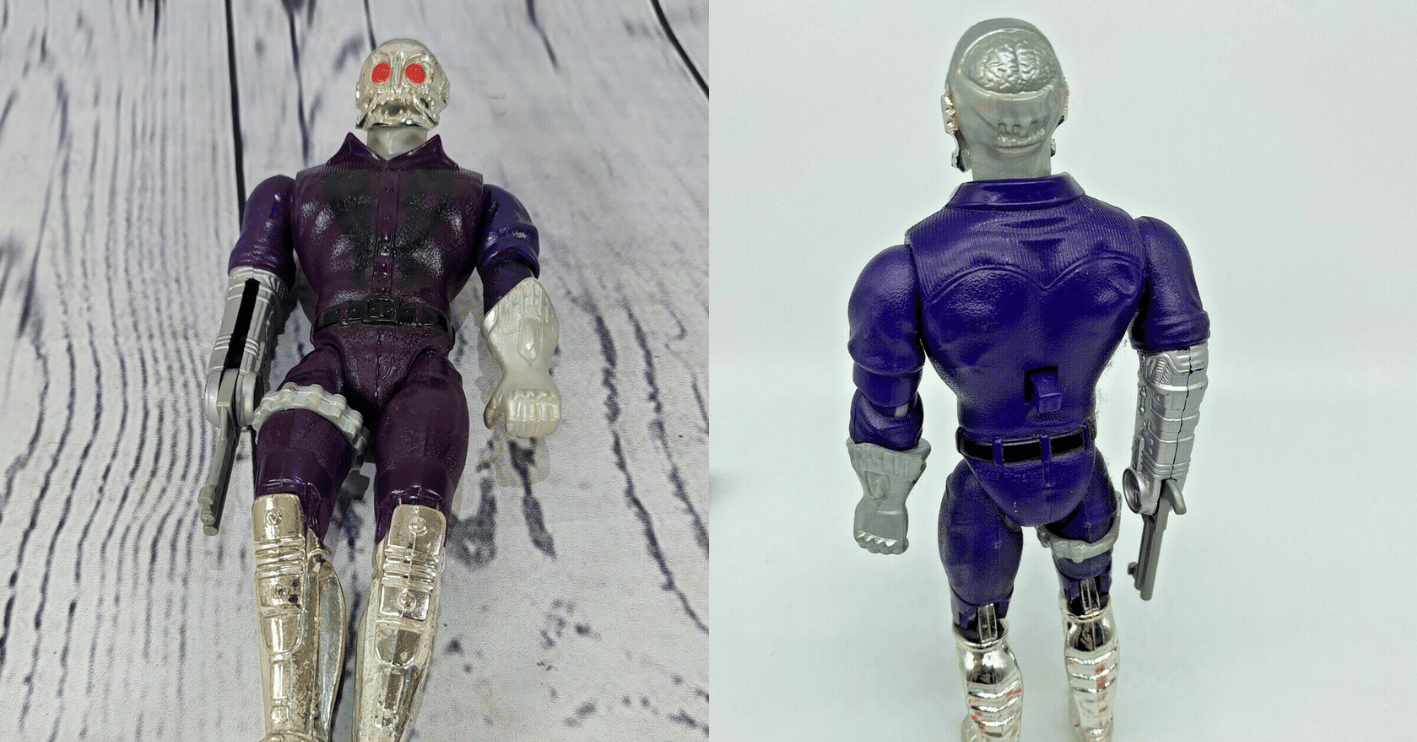 Thunder Stick isn’t as major of an antagonist as Tex Hex, but he’s still pretty fearsome in his own right. He’s unfriendly, sneaky and unyielding – and it’s his idea for Tex Hex to begin spying on Marshal BraveStarr. He’s also a robot with shiny golden boots and greeves, making him a kind of anti-C3PO figure.

Thunder Stick is another BraveStarr character with a signature hat, but often the action figure appears on resale sites without it, as kids aren’t always careful with their toys and little pieces are easily lost. That creates a big value differential that comes entirely down to the hat: an action figure is $59 without it and $125 with it. 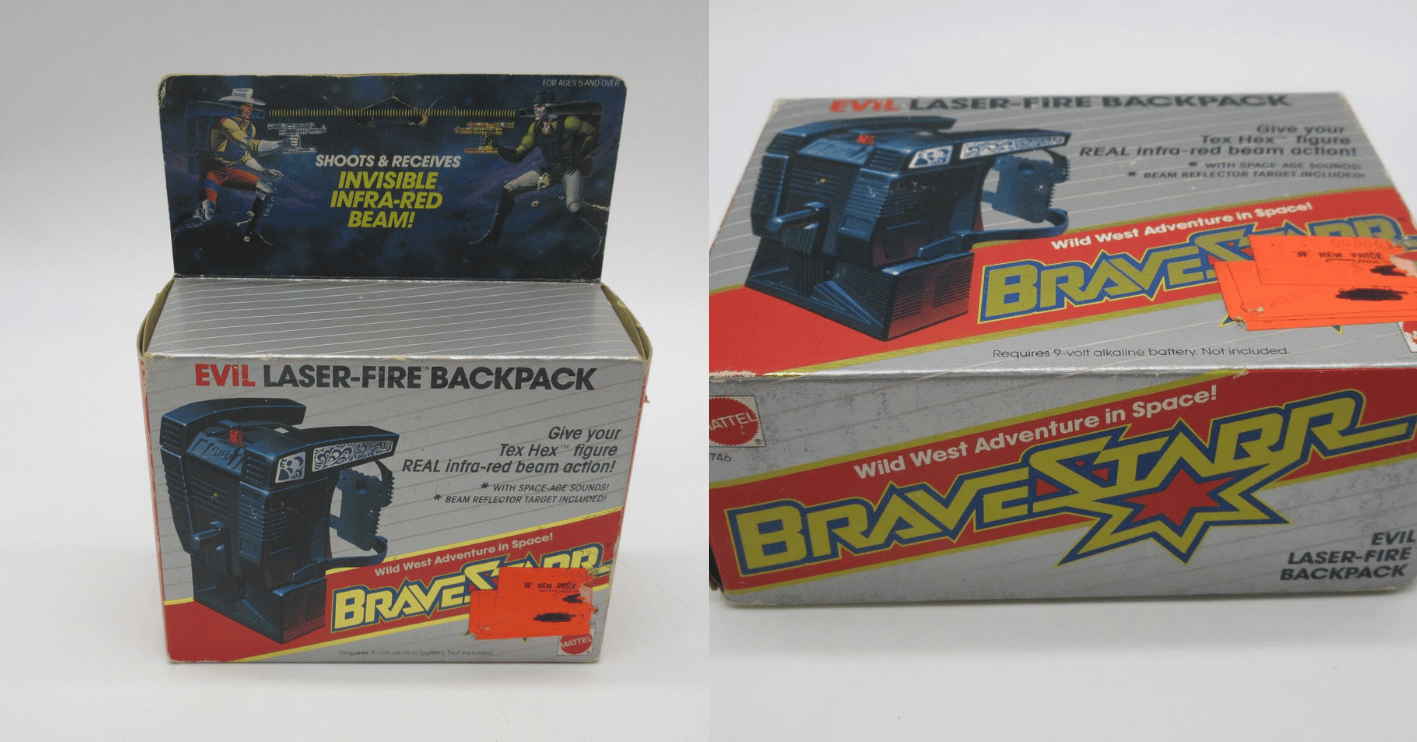 Thirty/Thirty’s saddle was not the only BraveStarr accessory released to enhance play. Two BraveStarr Laser-fire Backpacks were also released, both a good version and an evil version, which were designed to strap onto the backs of their respective characters in order to simulate a real shootout.

The Evil BraveStarr Laser-fire Backpack is somewhat easier to source on the resale market, but it’s also slightly more popular than its heroic counterpart, resulting in a secondhand price of $65. 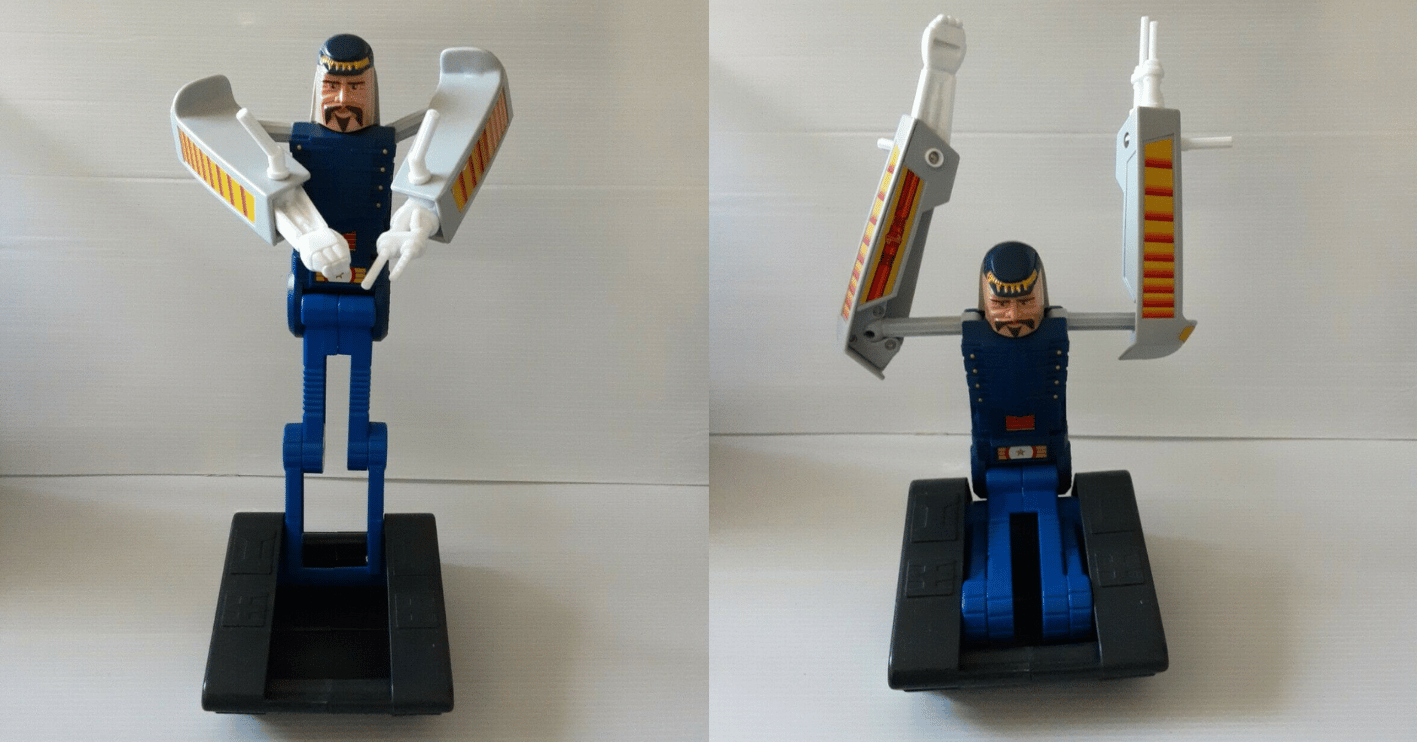 Even to 80s enthusiasts, BraveStarr is considered to be pretty weird. The combination of Western themes with sci-fi imagery, plus the wealth of different kinds of characters all existing together, set it apart from other similar shows. The strangest character obviously is Col. Borobot, a colonel who transforms into a kind of speeder for Tex Hex to ride.

Col. Borobot is a fairly minor, unpopular character, but his toy is one of the coolest given the transformer aspect. Therefore, it’s no surprise that his action figures are not listed for secondhand sale that often, and when they do, the price starts at $71 without a box, and raises to $83 with it. 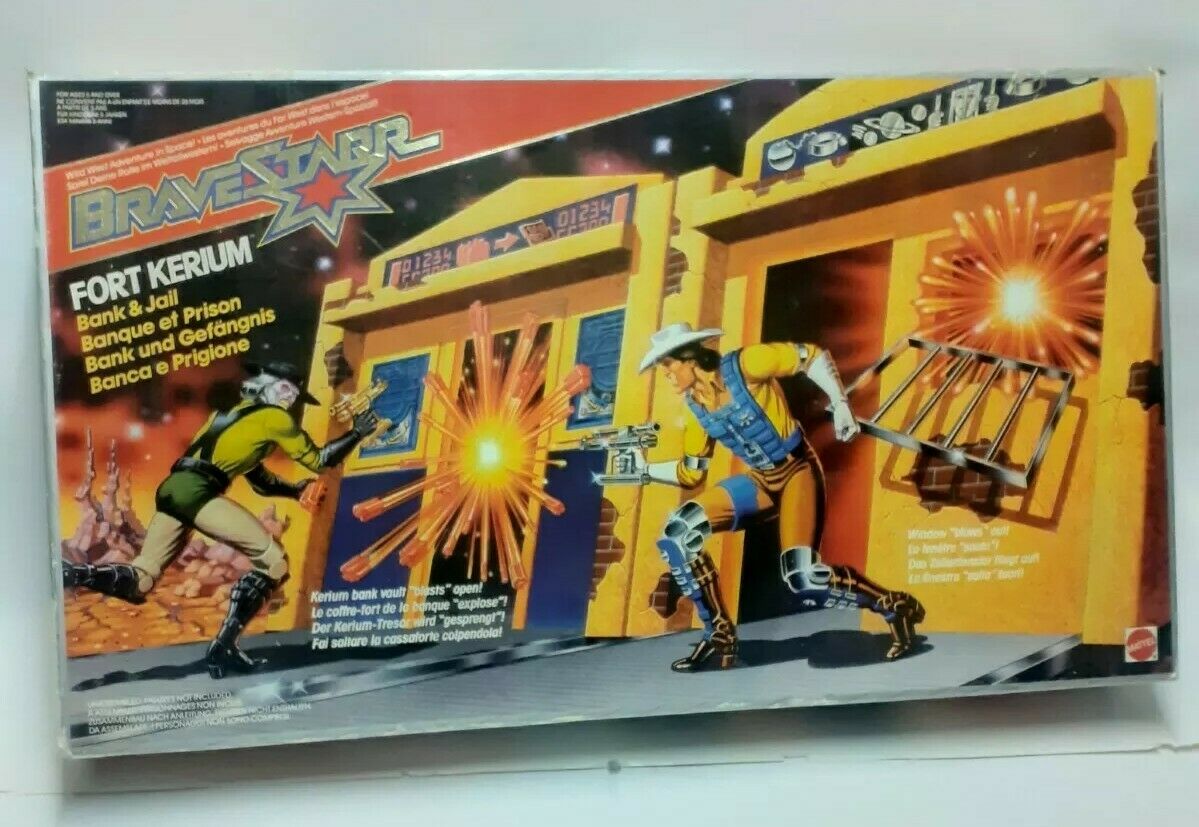 Westerns have various hallmarks, but none are more famous than the evil outlaw stealing from the bank, only to be put away by the Sherrif. This playset perfectly encapsulates that, by placing the jail conveniently right next to the bank on the street, so you can play through the whole plot without the need for any additional toys.

The Fort Kerium Bank & Jail playset is worth $71 on the secondhand market even without the box, which is more expensive than most other toys on this list. However, with the box that price skyrockets up to $239. 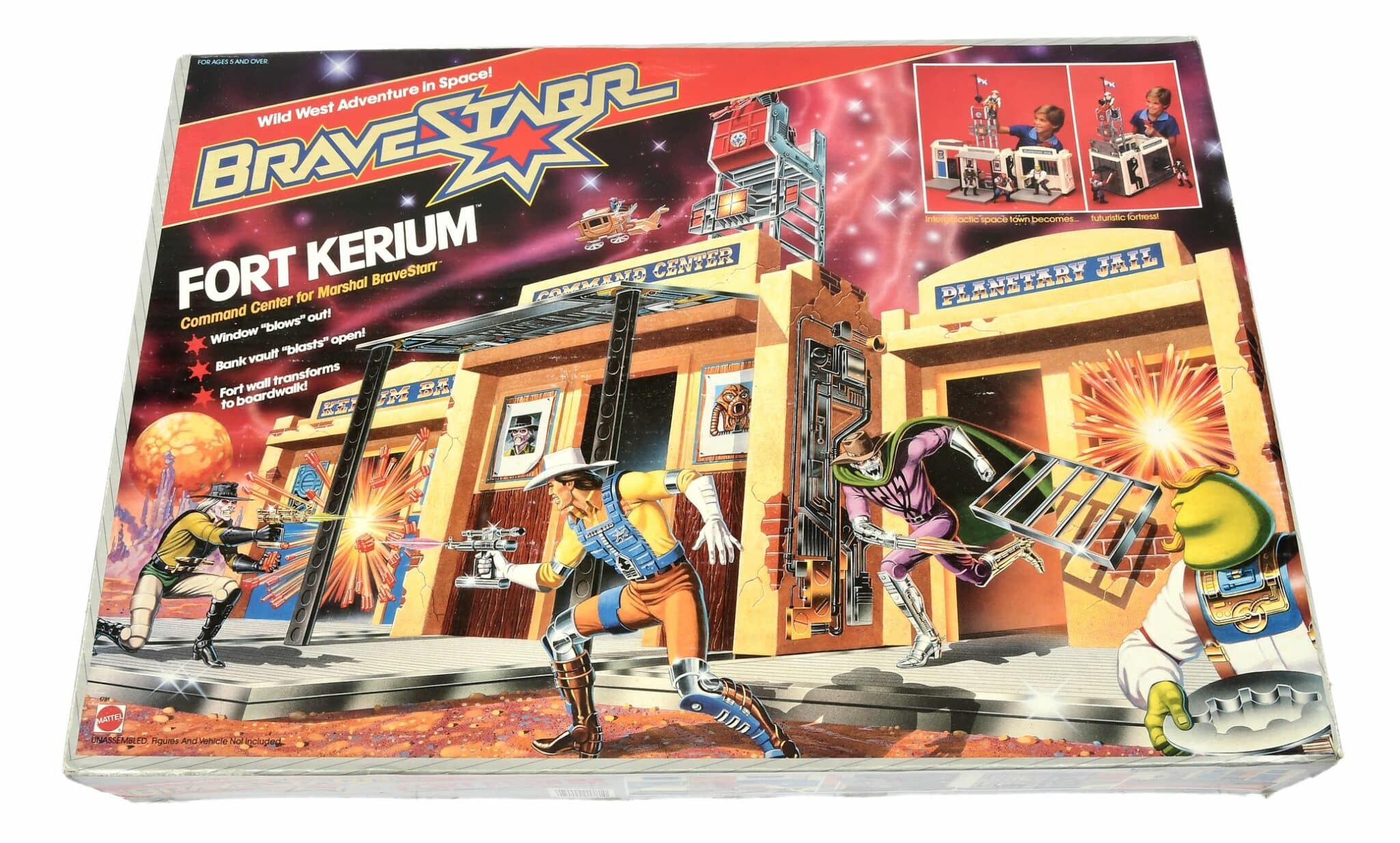 The Fort Kerium Bank and Jail is not the only BraveStarr playset available, there’s also the Fort Kerium Command Centre, which ironically also includes a bank vault. It’s a lot harder to source on the resale market than the other playset, which has resulted in a secondhand price of $155, significantly higher than the other play locations on this list.

It’s also perfect for staging space-age shootouts, especially if your bank and jail playset has been repurposed as a My Little Pony tea party location by your little sister! 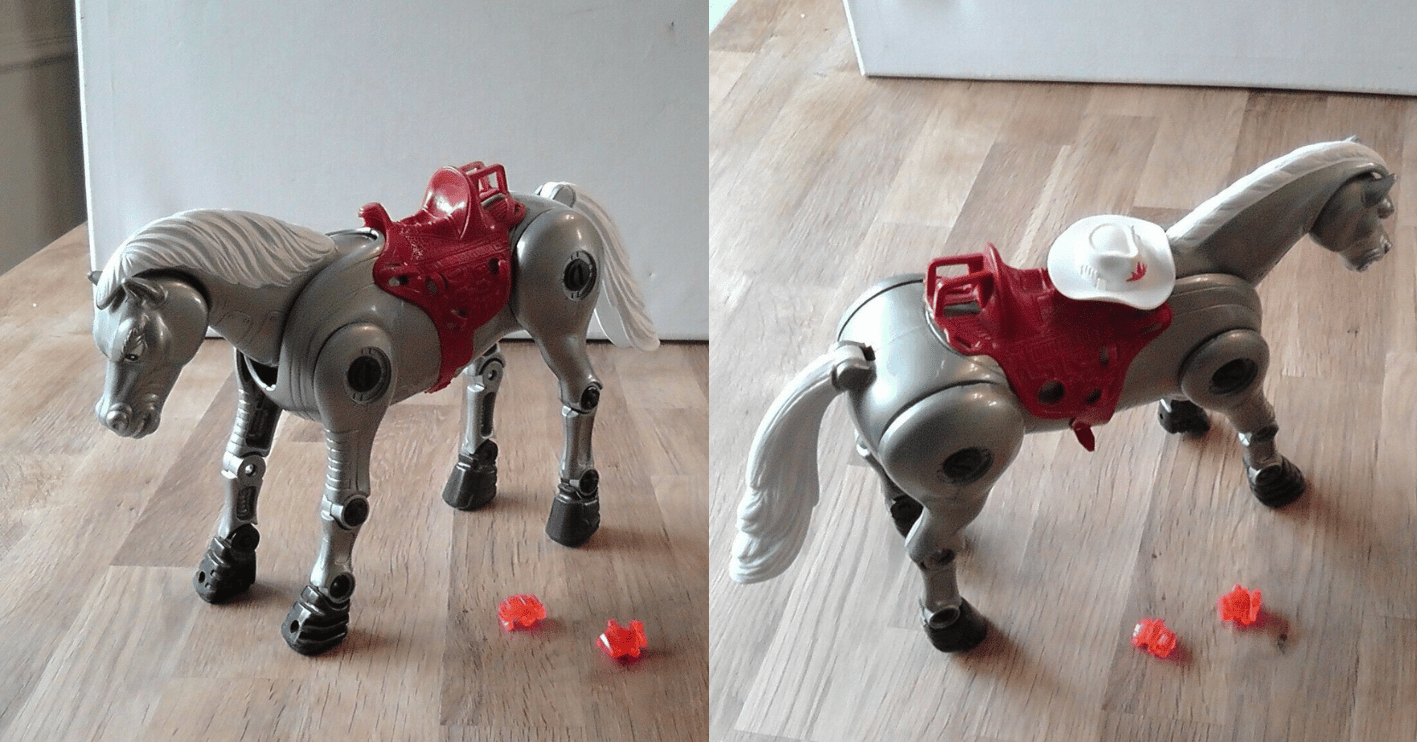 If you only had the money to get two BraveStarr toys, it’s obvious which two you’d pick. You’d need Marshal BraveStarr, the protagonist of the show who goes on all the crazy, heroic adventures, and you’d need Thirty/Thirty, the powerful steed who transports him over dangerous space-age terrain.

Maybe because of Thirty/Thirty’s uniquely detailed design, or just because animal toys are always beloved, getting a Thirty/Thirty toy will cost you $179 on the secondhand market, and you’re unlikely to find one still in out-of-the-box condition.