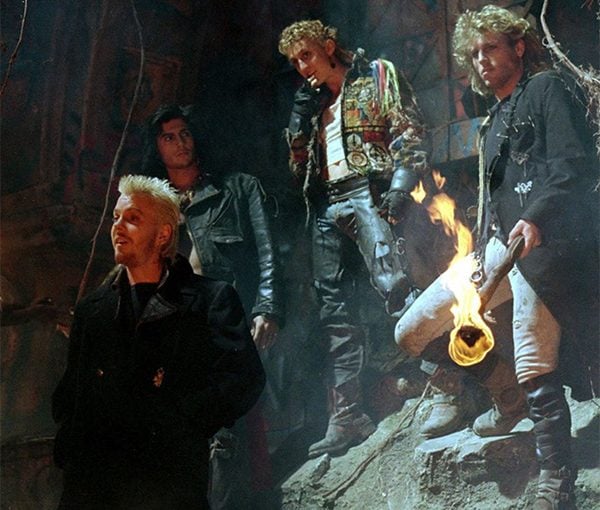 Directed by Joel Schumacher, The Lost Boys is a teen-oriented horror movie that rejuvenated the vampire for a new generation of audiences. With a handsome, charismatic ensemble cast, this 1987 box office hit helped launch the careers of many of its young up-and-coming stars.

After drinking a strange red liquid as part of a gang initiation, Michael finds himself experiencing nightmarish symptoms, and the younger Sam quickly realises the horrifying truth: his big brother is turning into a vampire.

With a title that nods to Peter Pan, The Lost Boys was originally conceived as a children's film for Richard Donner to direct, as a companion piece to his earlier hit The Goonies; but when Donner decided instead to offer Joel Schumacher the director's chair, Schumacher 're-vamped' the project into something hipper, edgier and more mature.

The Lost Boys marked the first collaboration of the 'Two Coreys,' Haim and Feldman, the latter of whom appears as comic book store clerk and self-proclaimed vampire hunter Edgar Frog; the teen idol duo would re-unite in several other films in the years ahead. It also gave an early role to Alex Winter, who would achieve fame alongside Keanu Reeves in 1988's Bill & Ted's Excellent Adventure. Meanwhile, Kiefer Sutherland would re-unite with director Joel Schumacher in another teen-friendly horror, 1990's Flatliners.