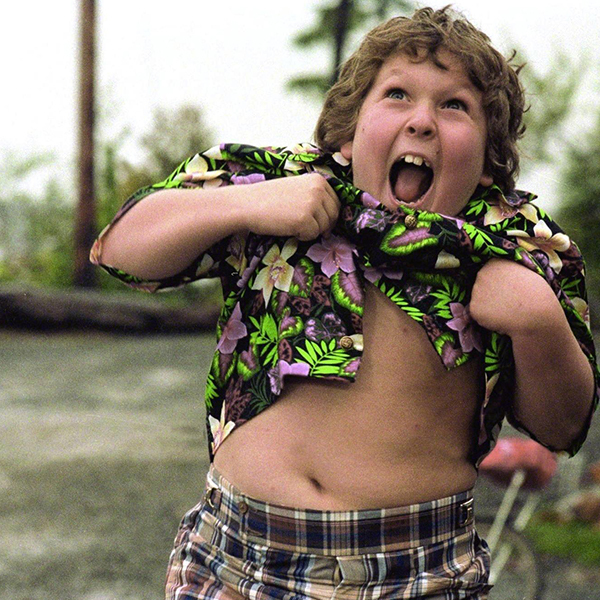 Released in 1985, The Goonies is an adventure comedy film co-produced and directed by Richard Donner.

The story concerns a group of friends, the titular Goonies, whose neighbourhood is about to be demolished to make way for a country club. When the children discover an old pirate map in the attic, they follow it into an underground cavern in search of lost treasure, valuable enough to save their neighbourhood and more besides. The children are in competition with a criminal family led by Mama Fratelli (Anne Ramsey) who seek the treasure for their own ends.

Starring Sean Astin, Corey Feldman, and many other child actors of the day, The Goonies is considered to be a quintessential adventure film and has developed a cult following.

Among the film's many pop culture moments are the 'truffle shuffle', a fat-jiggling dance performed by Chunks (Jeff Cohen), and the line "Hey, you guys!" delivered by the youngest, deformed Fratelli brother, Sloth.

While The Goonies never topped the box office - coming in second behind Rambo: First Blood Part II - it nonetheless made a healthy $126 million from a budget of $19 million. Much of the budget was spent on production design, including One-Eyed Willie's ship, which really was a full-sized replica of a pirate ship.

Adding to the quirkiness of the film, the soundtrack was written and performed by Cyndi Lauper. The song, The Goonies 'R' Good Enough, was a top ten hit and appears briefly in the film, though the song wasn't completed until principal photography concluded. The music video stars much of the cast of the film, with the notable exceptions of Kerri Green and Anne Ramsey, alongside professional wrestlers Rowdy Roddy Piper and Captain Lou Albano.

Why Chunk And Sloth’s Goonies Friendship Still Inspires Us

Goonies Cast: Where Are They Now?