Why Sloth, Chunk And The Lessons The Goonies Taught Us So Important, Even Today

Ah, Baby Ruth. There’s probably not a lot of people alive today, sitting around the 25 to 40 mark that don’t hear it in that way.

Sloth and Chunk, the loveable comic relief and semi-heroes of the tale are a friendship goal we can only hope to reach, then, now and in the future. 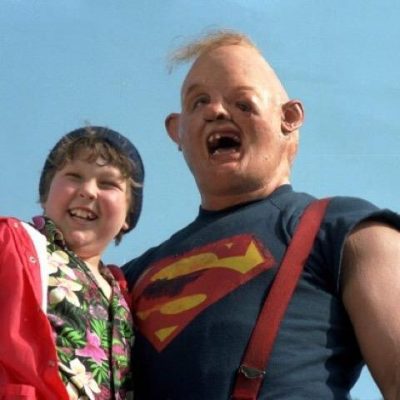 The Goonies is one of the most recognisable films of the 80s, so much so that the owner of the house has had to coat her home in sheets of plastic, desperate to get some privacy from the thousands of people who visited every year. Apparently, she was happy with the attention, until her garden started filling with trash, her fence was vandalised and people knocked on her door, at all hours, trying to get photos inside or maybe find some left over film prop.

With that in mind, it’s not surprising she’s now taken a dislike to tourists and who can blame her? 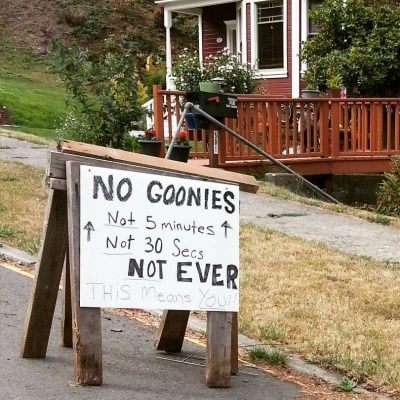 The Goonies was a simple idea: The age old story of the struggle against the giant to save the little world. A classic David and Goliath story, with a few pirates, bad guys, water coolers and vomit stories thrown in, just to liven it up.

The message was clear and simple: When you work together with friends, you have more chance of success, in everything you do, you have fun and maybe you can beat up the bad guy and get some sense of closure while you’re at it.

Oh, and be careful who you call Chunk in high school.

But it’s become so much more than that.

Sloth, the loving, but disfigured, son of Mama Fratelli who, while he was the subject of terror for Chunk initially, became his firm friend and rescuer. This is a small problem. Sloth seems to represent everything wrong with general society today. The whole thought that if you look different, you must be dangerous. I promise, that’s not always true! 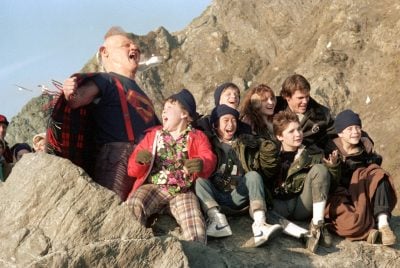 But the message of friendship and seeing below the surface is all the more important today than it ever was. We may look different, and sometimes different is scary, but that doesn’t mean it’s bad. And that doesn’t make it ok to torment those who look different or speak differently or don’t fit in with our socially accepted level of aesthetically acceptable.

Chunk reacts, as most people would, with fear. A large man, highly facially unusual, strides towards him screaming, a young boy is going to be afraid. But after the initial fear, Chunk takes the time to get to know Sloth and embraces him as a friend. It’s while sharing his chocolate and candy that Chunk realises that Sloth is just as trapped as he himself is. 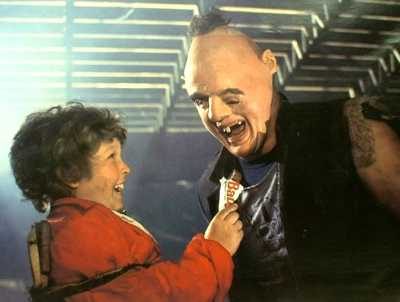 Children are not born knowing hatred or fear. Babies learn to fear the things that hurt them or that a parent figure teaches them is wrong, which is often why racism goes in families and hatred grows in small communities. While we are given an initial moral compass while we’re young, it’s our job to ensure the things we do, the thoughts we have and the actions we make are in the vein of good, or at the very least nuetral. 80s films gave my generation lessons that we still hold strong today:

1. Don’t forget where you came from, but improve yourself with every step.

2. Think about who you have to walk over to get to your dreams, can you go round instead of over or through?

3. Just because someone looks scary, doesn’t mean they are.

4. Bad guys always lose, it’s in their blood because they never think of anything but themselves.

Mama Fratelli justifies her fear of Sloth by saying that ‘she only dropped him once, or maybe twice’ as if that makes it ok. She encourages her other sons, blinded by greed to attack Sloth, trying to bind him and hide him all over again, but he finally breaks away from his love of ‘Mama’ and reminds her that ‘she been bad’. Basic life lessons from someone who looks different, basic lessons in manners, grace and not being a tool from a social reject. 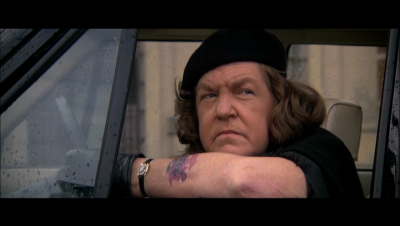 We learn how to behave from our peers, but at a certain point, we decide for ourselves what’s good or bad. Sloth is locked in a basement all day, picked on and beaten, tormented by his brothers and his mother. He looks scary and is a little scary, but he’s a good soul, he teaches himself his moral guidelines and sticks to them.

But we’re forgetting the others! Mouth, too keen to get the last word, but never truly cruel. Apart from telling Rosalita about Mikey and Brand’s dads extensive, if fictional, drug collection!

Brand, the caring older brother, there for the family but ultimately in that difficult stage. If he were a girl, they’d say he were too old for toys and too young for boys.

Data, the inventor, encouraged by his parents to learn, experiment and try. While his creations may look daft sometimes, or lead him to punch himself in the face, his friends encourage him as well. Remember, if it looks stupid but it works, then it’s not stupid.

Andy and Stef, the girls. Andy as the more popular one, and Stef as her slightly gawky friend, but despite their differences they stay close and remember why they were friends in the first place.

And of course, Mikey. The thinker, or dreamer, depending on who’s looking. The slightly sickly one, the classic younger brother of the jock-like, but loving, older brother. 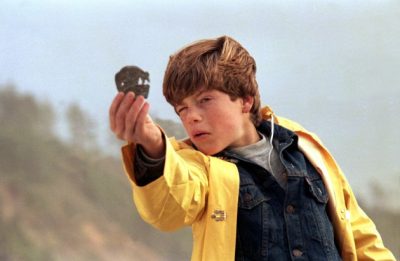 This group of friends, on paper, shouldn’t work, reminding us then, and again now, that our differences make us work, make us unique. If we were all the same puzzle pieces, we’d never fit together and it wouldn’t make a beauitful picture, it would just be a messy pile of cardboard on the floor, getting kicked under the metaphorical fridge or eaten by the dog. As it were.

80s movies taught us we need to be kind, we need to learn and think for ourselves. While we may argue, or come from different places, we are the glue that holds friendships together, each of us.

While that sentiment may seem hokey when it’s put like that, do me a favour please. Put The Goonies on, watch it and remember and honestly tell me you don’t feel a sense of joy at the end. The little guys win, the bad guys lose, the friends stay together and all is right with the world again.