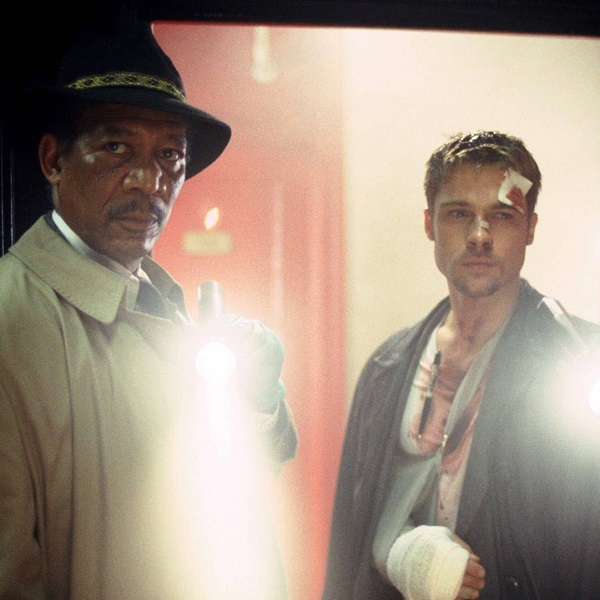 In the wake of The Silence of the Lambs, the 90s saw no shortage of dark thrillers centred on cops hunting down grisly serial killers - but none of them proved anywhere near as powerful as 1995's Seven. Director David Fincher's breakthrough film presented one of the bleakest, most chilling visions of the modern world to come out of Hollywood in years.

David Mills (Brad Pitt) is an ambitious young detective who finds himself partnered with the elder William Somerset (Morgan Freeman), a grizzled, cynical detective on the cusp of retirement. This uneasy partnership is put to the test immediately, as they're assigned a bizarre and disturbing case: a series of murders based around the Bible's seven deadly sins.

As they struggle to find the elusive killer, and his crimes grow ever more horrific, Mills finds his idealism sorely challenged, until the detectives find themselves - and Mills' wife Tracy (Gwyneth Paltrow) - becoming part of the grand plan of a maniac known only as John Doe (Kevin Spacey).

Seven was the second film directed by David Fincher. His debut, 1992's troubled Alien³, proved such a bad experience that Fincher considered walking away from film altogether, but he was drawn to Andrew Kevin Walker's script, recognising it as a "meditation on evil" rather than a standard cop thriller.

Before Morgan Freeman signed on to play Somerset, many respected elder actors were in line for the role including Al Pacino, Gene Hackman and Robert Duvall. Denzel Washington came close to playing Mills before Brad Pitt, and later expressed regret about turning the part down.

Gwyneth Paltrow's casting brought a lot of attention as she and Pitt were a couple at the time; though her role in the film is fairly small, she has a vital part to play in the film's shocking conclusion, a scene which studio New Line Cinema were very anxious about. Fincher and Pitt pushed back against pressure for a less bleak conclusion; ultimately one alternate ending was shot, but it wasn't much sunnier than the one we ended up with.

Making $327.3 million worldwide, Seven was a huge box office hit, which established Fincher as a major director and helped cement its central cast members as serious Hollywood players. It also kickstarted a long working relationship between Fincher and Pitt, who reunited on 1999's Fight Club and 2008's The Curious Case of Benjamin Button.