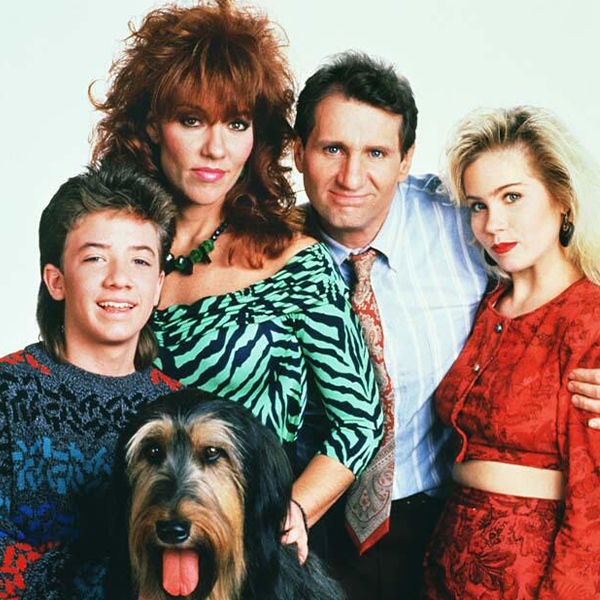 Where most family-based sitcoms prefer to show blissfully happy parents and children facing daily life with a smile, Married… with Children took an altogether more cynical approach – and many viewers found the show all the more refreshing for it. Premiering in April 1987, the series centres on the far-from-perfect Bundy family, and sports a considerably less wholesome sense of humour than most of its 80s TV peers.

Ed O’Neill stars as Al Bundy, a dejected shoe salesman approaching middle age. He’s the henpecked husband of Peggy (Katey Sagal), a dolled-up housewife who generally avoids doing any actual housework. Their children are the dim-witted popular girl Kelly (Christina Applegate) and the also dim-witted but considerably less popular Bud (David Faustino), both of whom generally want nothing from their parents except more money.

On top of presenting a far less idyllic vision of family life than other sitcoms of the time, Married… with Children was also notable for boasting much bawdier jokes. The show’s subject matter frequently veered towards the sexual, which often prompted controversy. This reached a peak in the third season, when an episode in which Al goes bra shopping prompted anti-obscenity campaigner Terry Rakolta to call for a boycott of the series. Perhaps unsurprisingly, this high-profile outrage only helped the show’s ratings.

Married… with Children ended in 1997 after 259 episodes. Christina Applegate went on to a successful film career, Katey Sagal’s later TV roles include Futurama and Sons of Anarchy, and Ed O’Neill went on to another long-running sitcom, Modern Family.

20 Things You Probably Never Knew About Married… With Children