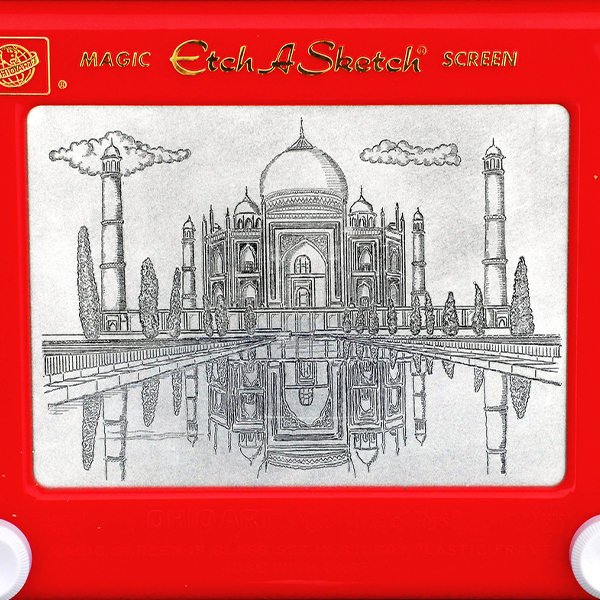 A mechanical drawing toy, the Etch A Sketch was one of the most successful toys of the 1960s and has gone on to become one of the best-known toys of all time.

The toy consists of a glass screen coated in aluminium powder which can be manipulated with a stylus; the stylus is controlled by two dials on each corner, representing horizontal and vertical movement. By shaking the toy, beads contained within re-coat the glass with powder, effectively wiping the screen of any previous design.

The Etch A Sketch was designed by the Parisian André Cassagnes in the late 50s while he was working as an electrician. After discovering that his employer, the Lincrusta Company, created picture frames with an aluminium powder that transferred easily to decals, the idea for the toy was born.

Cassagnes would go on to partner with the Ohio Art Company to bring his so-called écran magique or 'magic screen' to market in the US, launching in 1960. Now known as the Etch A Sketch, it sold more than 600,000 units at a price of $2.99 (approximately equivalent to $26 today).

By the 90s, and with the rise of video games and other digital toys, sales of the Etch A Sketch had plummeted. This was rectified by a short scene featuring the Etch A Sketch in 1995's Toy Story, which ended up increasing demand for Etch A Sketches by such a margin that the production line was required to work overtime. Sales dipped and then roared back again in 1999, when the toy was featured in a longer scene in Toy Story 2.

The Etch A Sketch was once again buoyed by a controversy in the US presidential race in 2012. While the gaffe was soon forgotten, and hardly registered at the time, it was nonetheless enough to boost sales of the toy by more than 30%.

After launching the Etch A Sketch, Cassagnes became a designer of kites, specialising in the design of original modular kites in the 80s. He sadly passed away in 2013 at the age of 86.

12 Random Things That You Remember From Your Childhood