Apocalypse Now is notorious for having one of the most troubled film shoots ever. Director Francis Ford Coppola’s Vietnam war drama endured innumerable hardships, the first of which came after just a month of production, when original leading man Harvey Keitel was fired and replaced with Martin Sheen.

While Keitel has never seemed bitter about being let go from Apocalypse Now, his dismissal hurt his career for a time. Film lovers have long wondered what might have been had Keitel stayed in the role – and how much, if any of his performance wound up making it into Coppola’s ambitious epic. 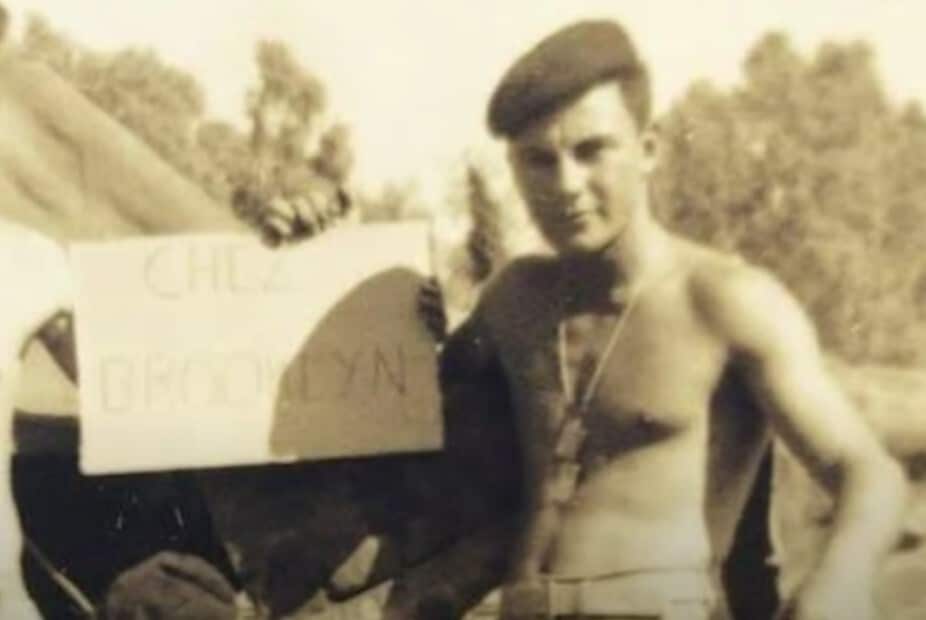 Born May 13, 1939 in New York, Harvey Keitel grew up in Brooklyn. Before embarking on an acting career, he spent three years in the United States Marine Corps, enlisting at age 16.

Keitel trained as an actor under the legendary ‘method’ teachers Lee Strasberg and Stella Adler, and broke into film with the lead in Who’s That Knocking at My Door, the feature debut of director Martin Scorsese. 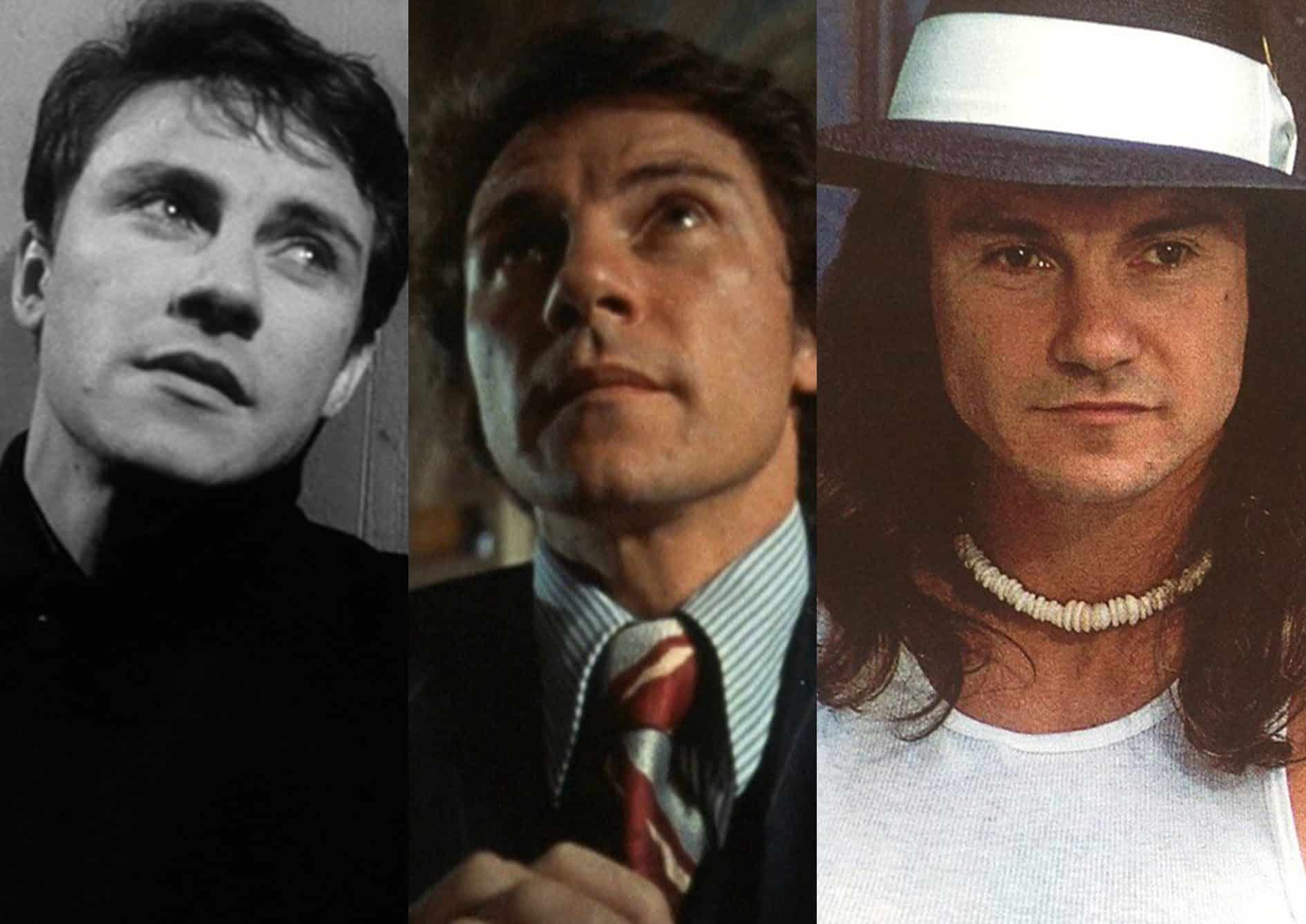 While Keitel’s Mean Streets and Taxi Driver co-star Robert De Niro quickly became an acclaimed and bankable leading man, Keitel himself had yet to land a major leading role – until, aged 36, he was offered Apocalypse Now. 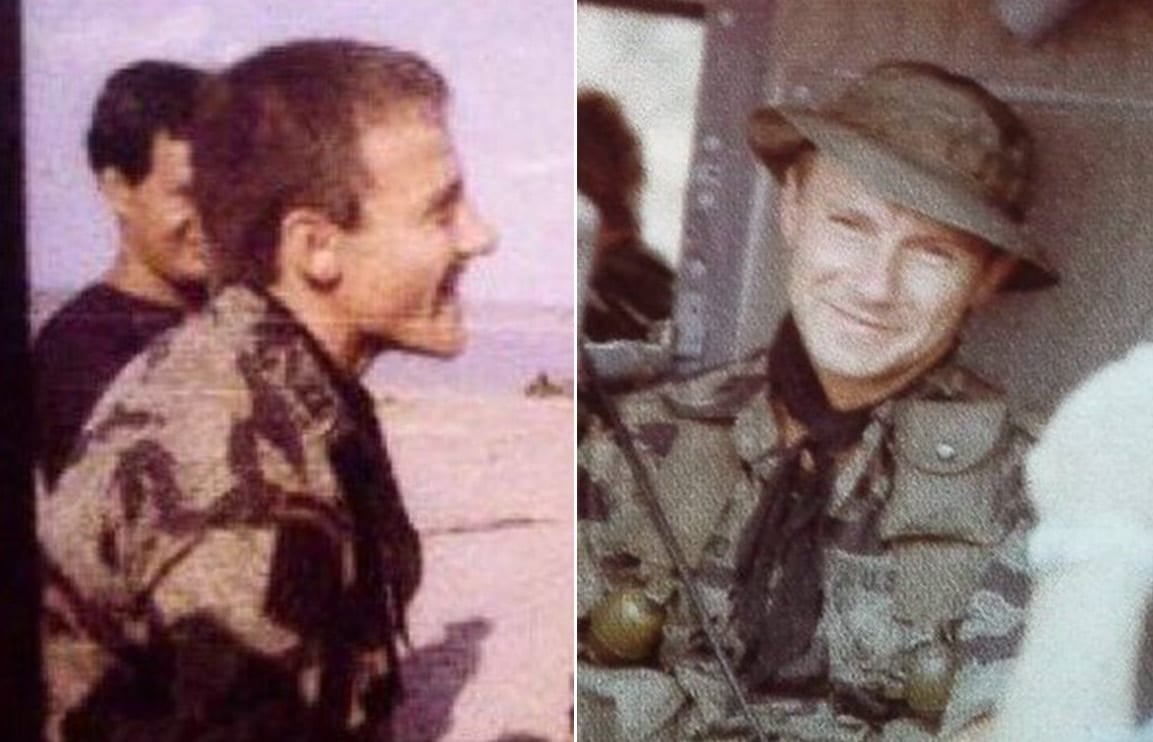 A passion project of screenwriter John Milius (who would later direct Conan the Barbarian and Red Dawn), Apocalypse Now is a loose adaptation of Joseph Conrad’s novella Heart of Darkness.

Initially, Francis Ford Coppola intended to produce the film with his friend George Lucas directing, but when Lucas stepped back to make American Graffiti and Star Wars, Coppola decided to take the helm himself. 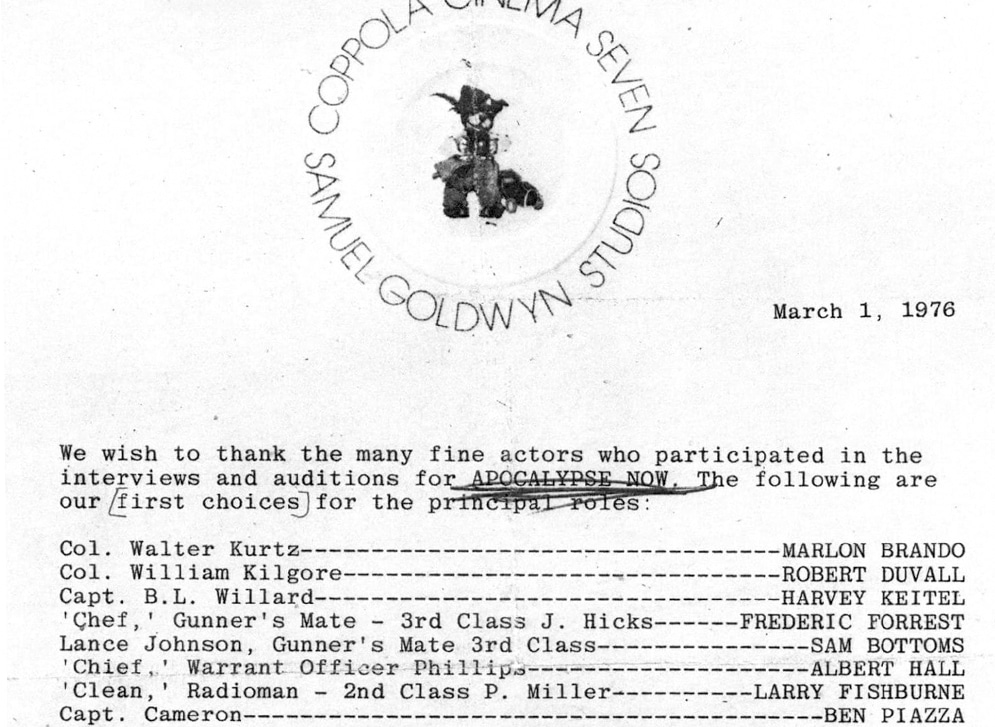 After the massive, multi-Oscar-winning success of The Godfather and The Godfather Part II (as well as the less commercially successful but critically acclaimed The Conversation), Coppola was widely considered among the finest directors of his generation.

As such, the announcement of Apocalypse Now as his next film prompted enormous industry buzz. Coppola aimed big from the get-go, first offering the key role of Captain Benjamin Willard to one of the biggest movie stars around, Steve McQueen. 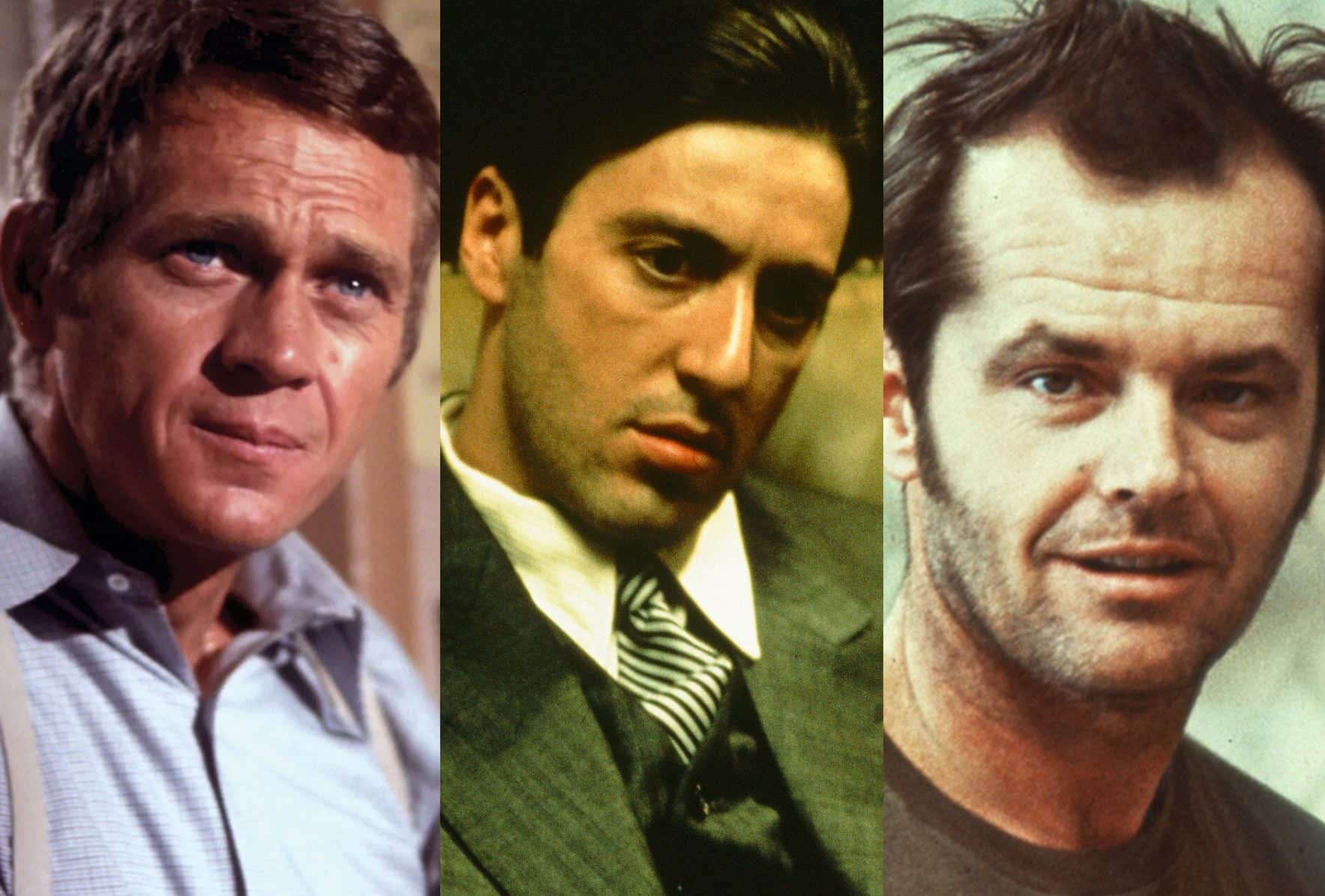 McQueen ultimately passed on the role over disagreements about the character. Coppola then went to Al Pacino, with whom he’d worked on the Godfather movies, but Pacino would also decline, as would third choice Jack Nicholson.

After considering a number of other actors including James Caan, Robert Redford and Nick Nolte, Coppola ultimately felt the right actor for the job was Martin Sheen – but Sheen was already committed to another film set to shoot at the same time. Finally, Coppola went to Harvey Keitel. 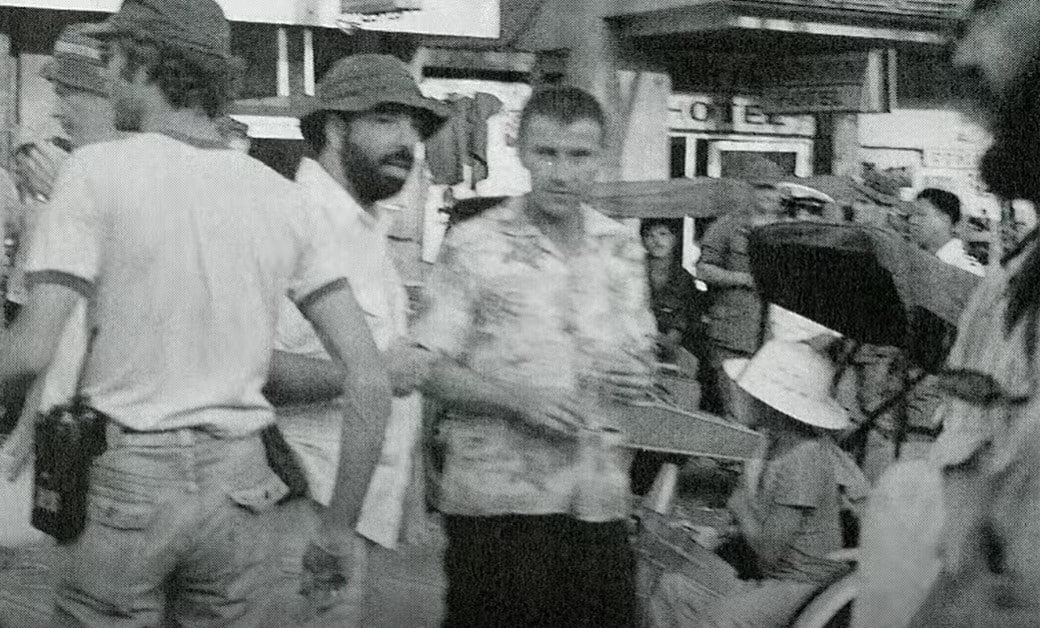 Coppola was friends with Martin Scorsese, and having been impressed by Keitel’s work in Mean Streets, decided he was the best actor available for the part. Cameras started rolling in Manila, the Philippines on March 20, 1976, with the film initially poised to open in theatres a year later.

Keitel started work as Willard with much of the cast yet to be finalised; this included the vital role of Colonel Kurtz, which Marlon Brando had yet to sign on for (Orson Welles and Lee Marvin had both declined the role). 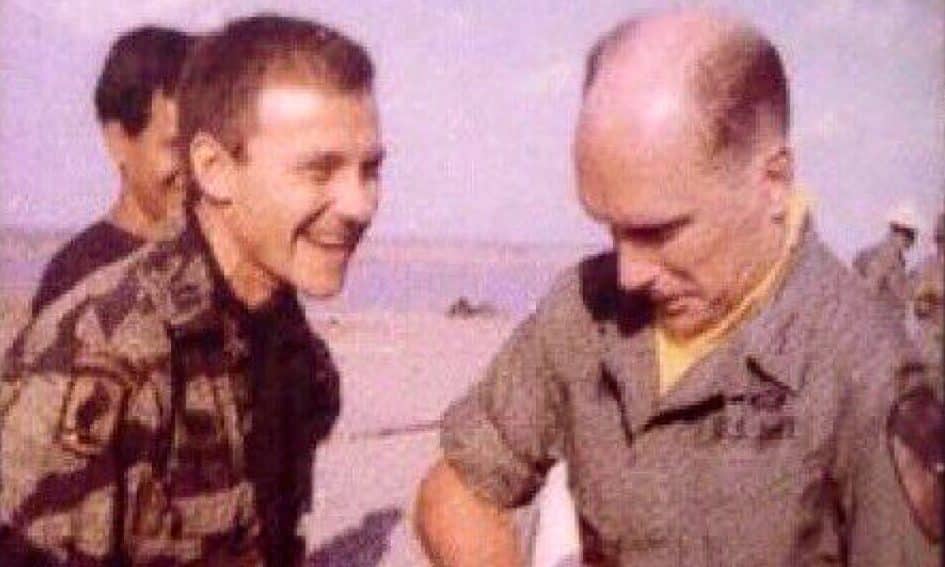 The only other major role in Apocalypse Now whose casting had been confirmed during Keitel’s tenure was Robert Duvall, another Godfather actor who took the key supporting role of Lt Col Kilgore (famed for his iconic “I love the smell of napalm in the morning” monologue).

The shoot began, but Coppola quickly felt that something wasn’t quite working, and one of his primary concerns was Keitel’s take on the character of Willard. 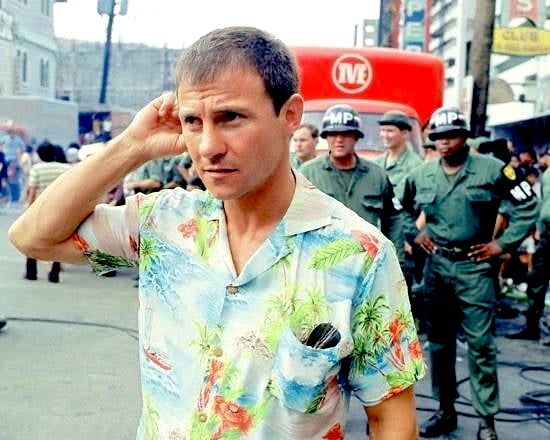 The problem, Coppola has since explained, was that Willard needed to be a “passive onlooker” on Apocalypse Now’s intense and bizarre journey, and the more active Keitel “found it difficult” to play an observer.

Editor Walter Murch concurs, telling Yahoo! in 2014, “The nature of Willard in Apocalypse Now is that he is the eyes through which you watch the events. He’s your guide into this inferno. But he doesn’t really ever do anything.” 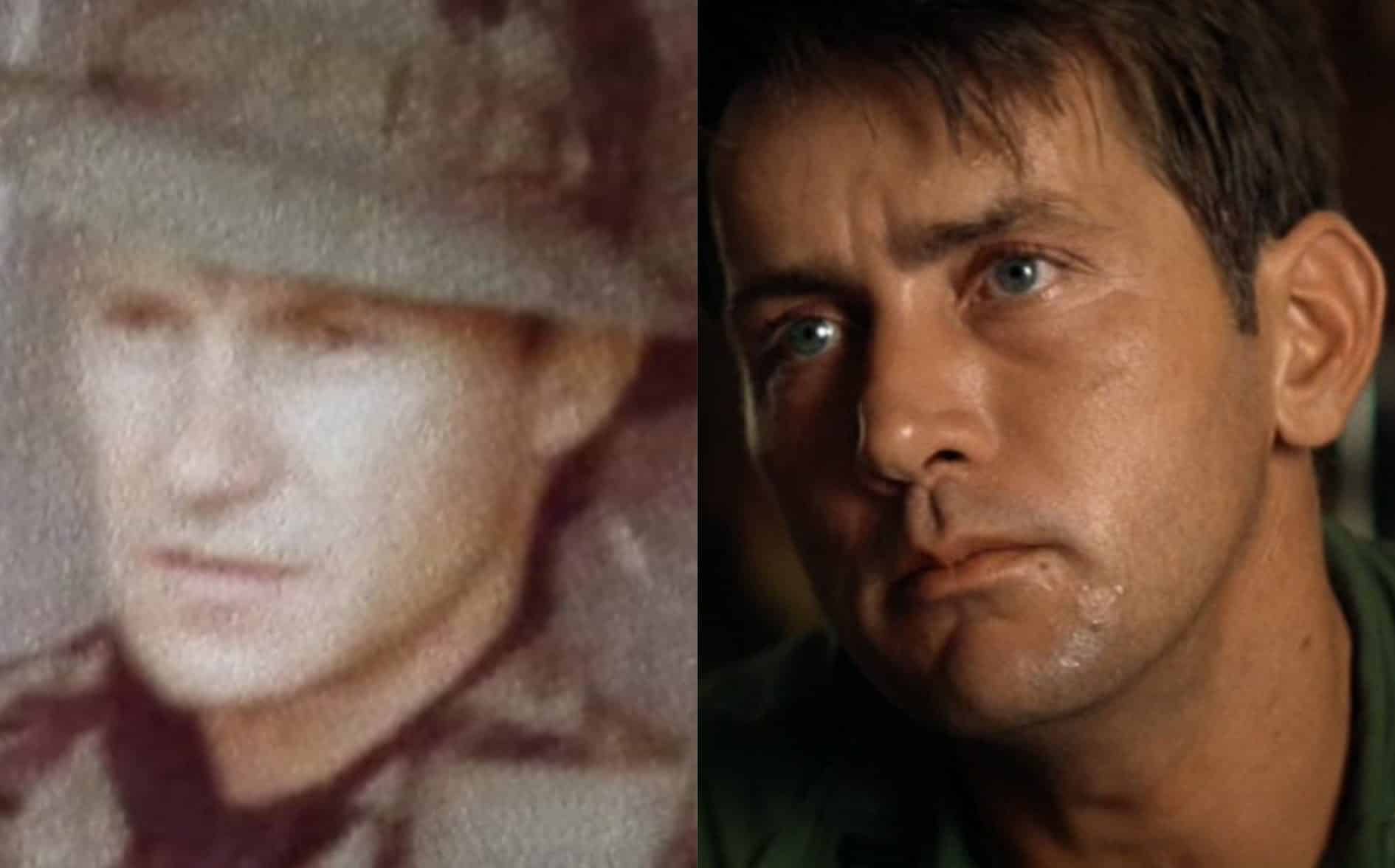 Murch also addresses a key difference between Keitel and Sheen: “On a simply biological level, Martin Sheen has very big eyes that look at the world and Harvey Keitel has very narrow eyes.”

After the first few days of shooting – which included a tricky shot of Willard’s boat taking off up the river against the sunset – Coppola and company sat down to watch the early footage, and had concerns about what they saw.

In no short order, Keitel was dismissed from the role of Willard, and Coppola hopped on a flight back to the States to meet with Martin Sheen and entreat him to take the role.

Sheen signed on, and would arrive on the set in Manila on April 24, 1976. Reportedly only four days’ worth of material featuring Keitel had to be reshot with the new leading man. 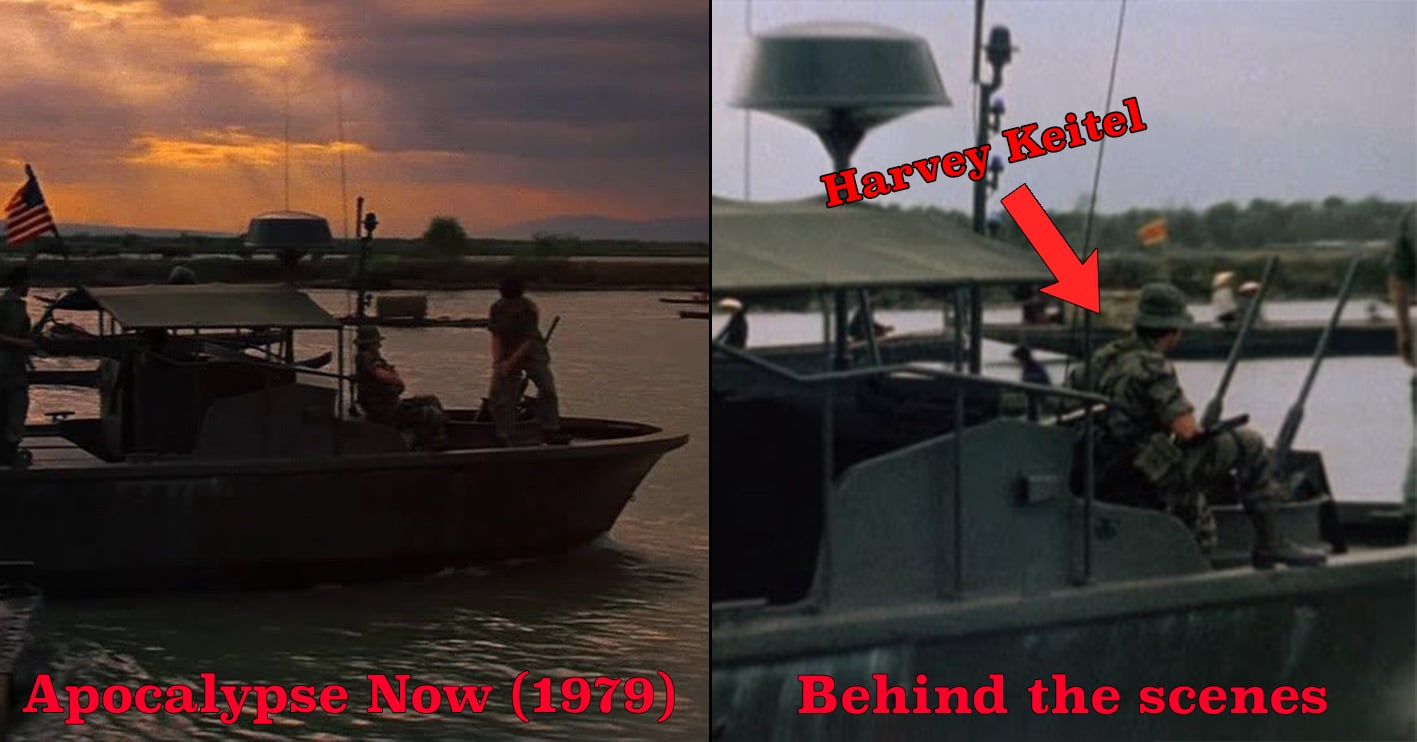 So what, if any, of Keitel’s performance as Willard remains in Apocalypse Now? The shot of Willard on the boat leaving the dock at sunset is likely Keitel – here, you can see Willard wearing the uniform worn only by Keitel’s version of the character – while editor Walter Murch has confirmed that at least one shot featuring Apocalypse’s original star remains in the final film.

Murch explains, “If you look at the shot, it’s from a helicopter looking at the boat as it’s taking off from the dock at the beginning of the trip. The boat leaves the dock and circles and heads out in the ocean.” 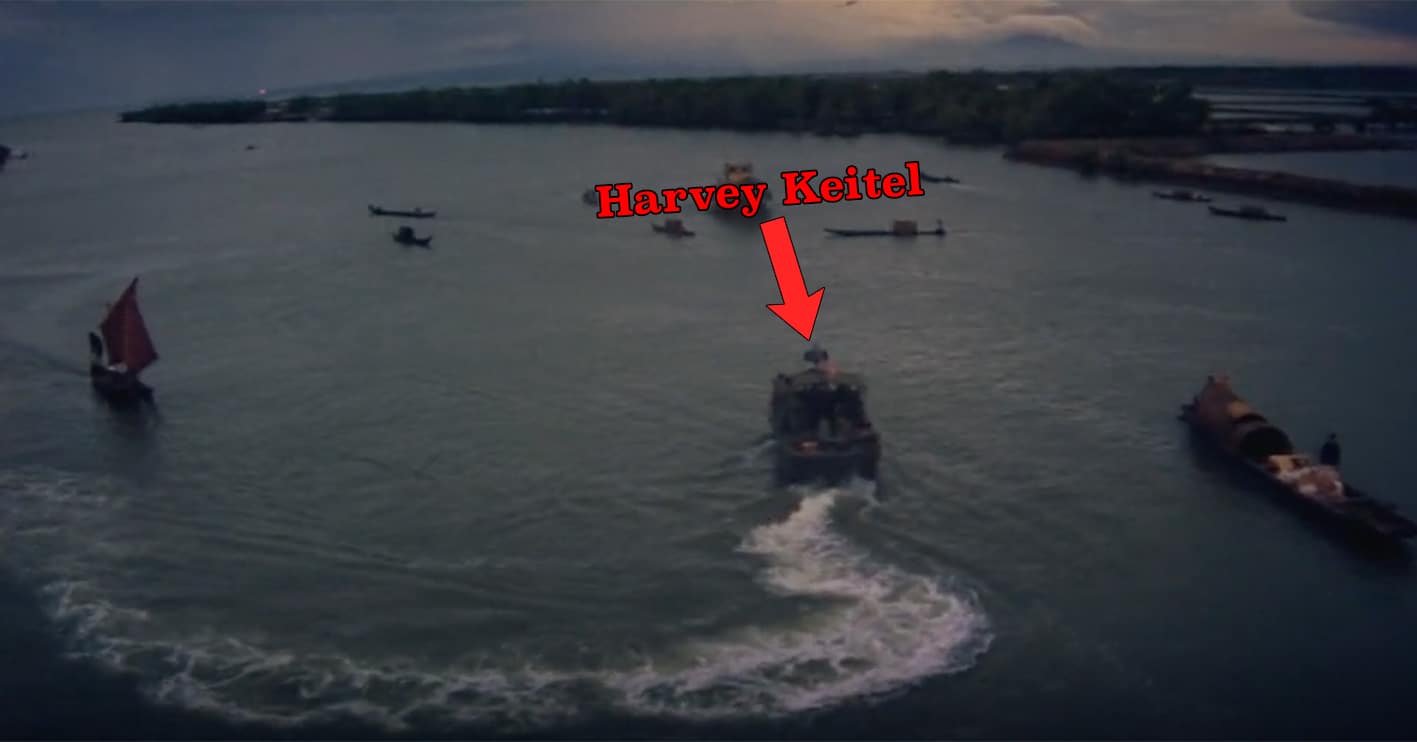 “The person sitting on the front of the boat is Harvey Keitel. It’s such a long shot you can’t tell, but he is in the film!”

Sheen may have given the performance that Coppola wanted, but sadly this did not mean the Apocalypse Now shoot was without any further incident. The film would not reach screens until 1979, having faced behind-the-scenes difficulties too numerous to list here. 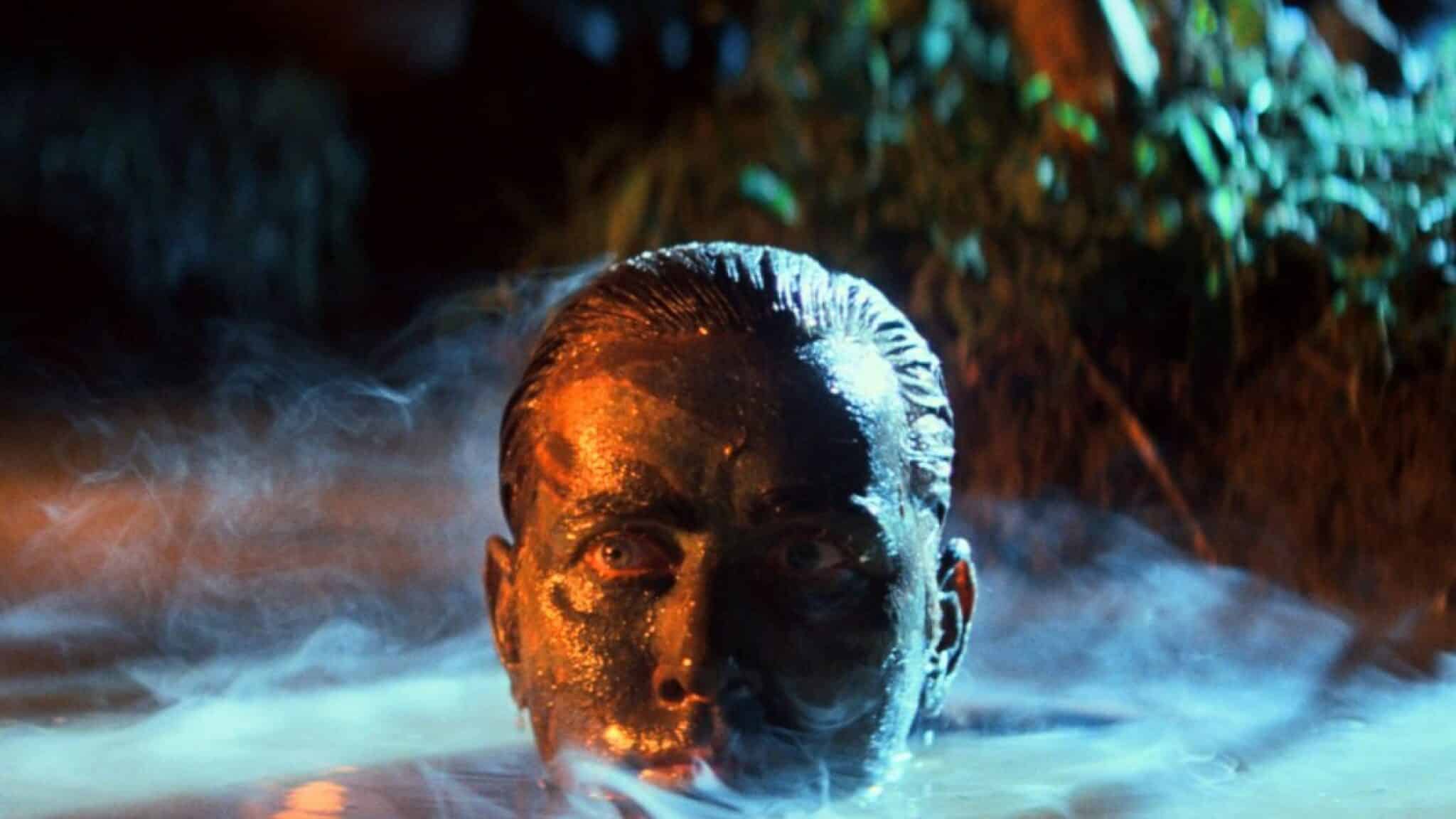 As for Keitel, reports have long varied as to exactly why he was fired. Some have claimed there was a contract dispute, but this has largely been discredited. 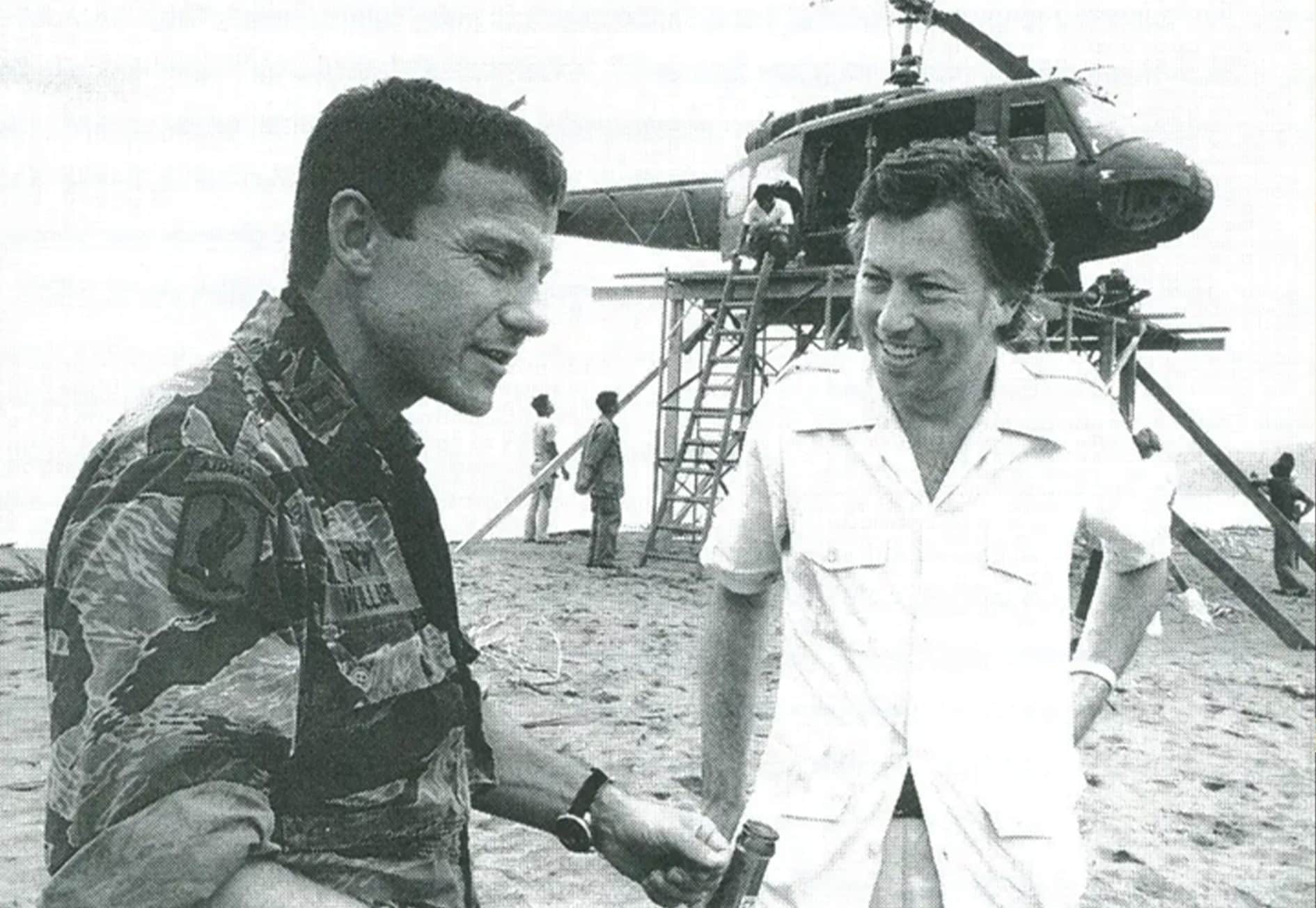 This is the only point that Keitel disputes as a “blurring of the truth,” pointing out that he “spent three years in the United States Marine Corps in the jungle.”

Nonetheless, the actor insists “I’m not upset with Francis, he did what he felt he had to do.” 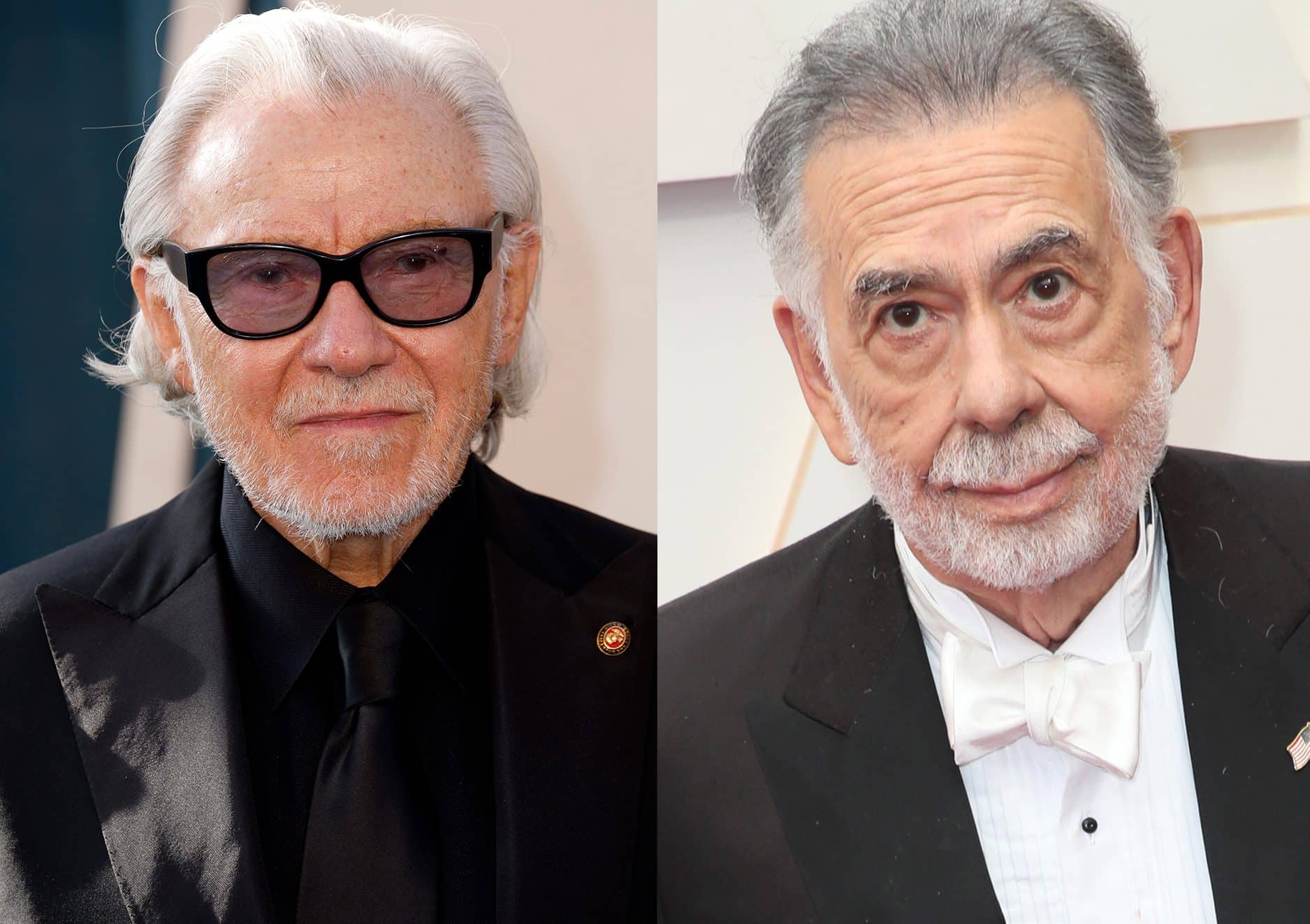 Keitel’s career would slow in the years following Apocalypse Now. It wouldn’t be until his Oscar-nominated turn in 1991’s Bugsy and above all his lead performance in 1992’s Reservoir Dogs that he would be rediscovered as one of the great American actors.

All these years later, Keitel is philosophical about his Apocalypse Now experience: “I can’t say that [it hurt my career]. I was disappointed, and it hurt on some level, yes, but… I look at every event as an opportunity to learn something from it.”