10 Things You Never Knew About The Smiths

The Smiths are undoubtedly one of the most popular bands to come out of the 1980s. Comprising of four key members – frontman Morrissey, guitarist Johnny Marr, bassist Andy Rourke, and drummer Mike Joyce – the band quickly went from conquering the Manchester music scene to garnering international fame.

Although the group was only together between 1982 and 1987, they packed a lot into those five years and their influence has been long-lasting. Fusing together post-punk and dance-pop, The Smiths’ unique sound, combined with Morrissey and Marr’s beautiful lyrics cemented their place as one of the best British bands of all time. Here are 10 facts you might not have known about this iconic group.

10. Morrissey worked as a clerk, record salesman, and hospital worker before forming the band with Marr 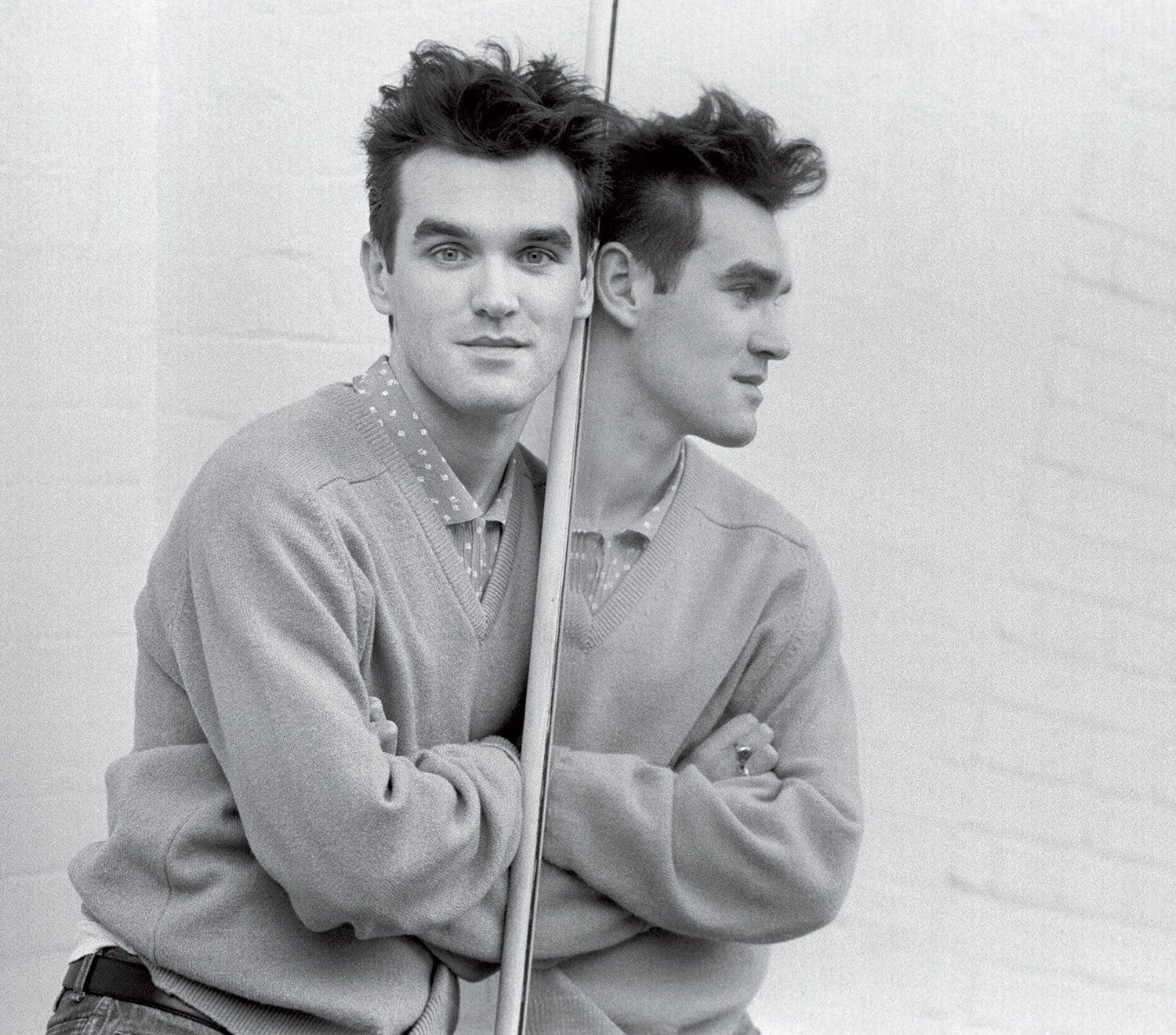 Despite being a promising student, Morrissey struggled to find rewarding and stable employment after leaving school. Initially, he worked as a clerk for the civil service. Then, he went on to act as a clerk for the Inland Revenue. Next he took up a role as a salesperson in a record store before moving on to work in a hospital.

This was no walk in the park. Morrissey writes in his autobiography: “My work in the sluice room required me to shake bits of human innards out of post-op doctors’ uniforms.” After leaving his hospital job he began claiming unemployment benefits.

9. They chose the name ‘The Smiths’ because it was the most ordinary name possible 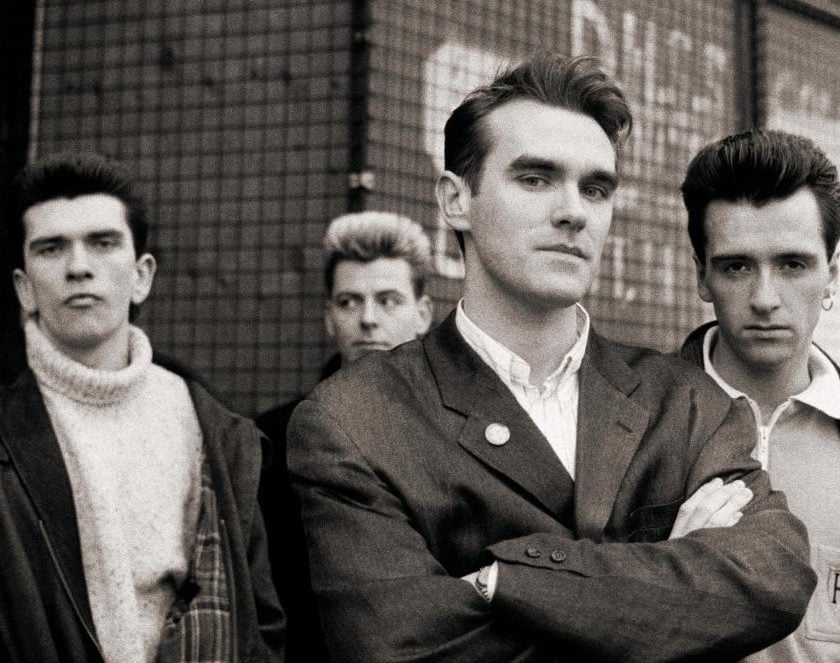 The 80s saw a boom of bands with interesting names, including the pretentious-sounding Orchestral Manoeuvres In The Dark. But Morrissey wanted something simpler when it came to naming The Smiths. Speaking on kids TV show DataRun in 1984, Morrissey said: “I decided [on The Smiths] because it was the most ordinary name, and I thought it’s time that the ordinary folk of the world showed their faces.”

Marr concurred in a separate interview with The South Bank Show in 1987, where he derided his musical contemporaries with more longwinded names. “You’ve got all these synthesising duos, really mixing metaphors, really corny as hell metaphorical lyrics with 18 syllable names. And because we understood all that totally, we were involved in it to an extent and observed it, we just turned the whole thing around and called ourselves The Smiths.”

8. Morrissey reportedly fired Andy Rourke from the band via a Post-It note 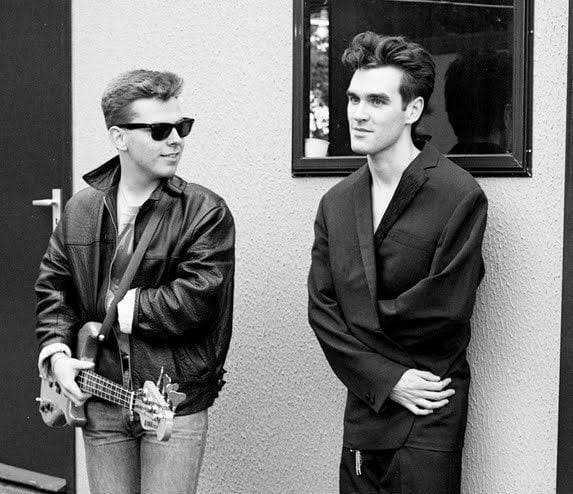 Bassist Andy Rourke suffered with increasingly worse drug addiction issues which came to a head in 1986. While recording The Queen Is Dead, the musician was reportedly spending upwards of £100 a day on narcotics. His addiction got so bad that Morrissey temporarily fired him from the band. According to Rourke, Morrissey let him know that he’d been fired by fixing a Post-It note to his car windscreen that read “Andy, you have now left The Smiths. Good luck.” Morrissey denies leaving such a note.

The group then introduced Craig Gannon into the band in 1986 to take Rourke’s place. The group briefly continued as a five-piece when Rourke returned later in the year after getting sober.

7. Morrissey controversially once wore a fake hearing aid on stage as a show of solidarity with a deaf fan 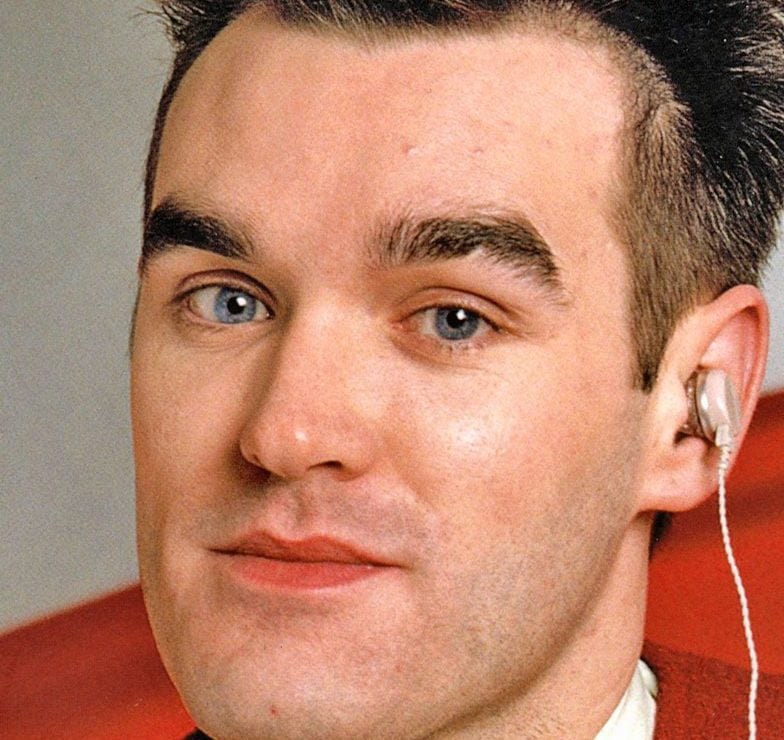 Back in 1984, Morrissey came under fire for donning a hearing aid on stage while performing on Top of the Pops. He was accused of mocking the hard of hearing community, but it later came to light that the singer was actually trying to show solidarity with a deaf fan who felt ashamed of their own hearing aid.

Interestingly, Morrissey’s trademark chunky NHS specs were also an unnecessary addition to his wardrobe as his eyesight, like his hearing, was perfect.

6. ‘Fifth Beatle’ George Martin declined the chance to produce The Queen Is Dead 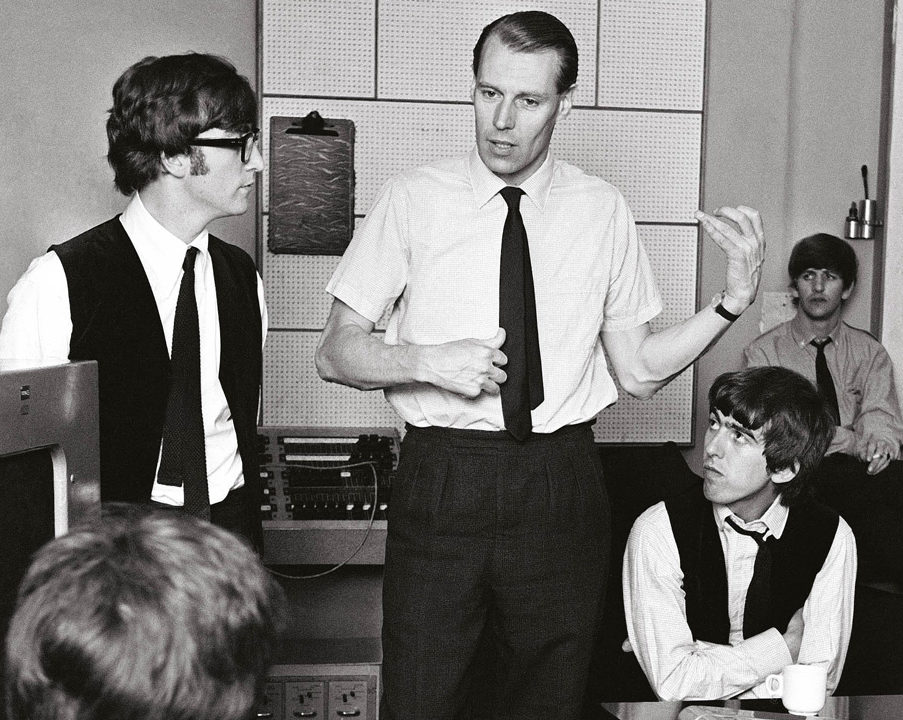 Legendary Beatles producer George Martin had already worked on a number of iconic albums including Sgt. Pepper’s Lonely Hearts Club Band when he was asked to work on The Queen Is Dead. Martin declined, stating that he would prefer to be remembered for his work with The Beatles.

Martin – now affectionately known as ‘The Fifth Beatle’ – got his wish, but it’s fair to say he missed a trick by choosing to pass on The Smiths. The Queen Is Dead was met with critical acclaim and even lauded as the greatest album ever by NME in 2013.

5. Morrissey didn’t want to release There Is A Light That Never Goes Out

Morrissey might have been a dominant force within the band, but he didn’t always get his way – and thankfully so. The Smiths frontman was strongly opposed to including There Is A Light That Never Goes Out on The Queen Is Dead. Writing in his autobiography, Morrissey recalled trying to convince Marr to leave the song out of the release: “I had missed the value of There Is A Light That Never Goes Out, and I suggested to Johnny [Marr] that it shouldn’t be included on the album.”

“The humiliation I live with, because the suggestion is as everlasting since the song became – and continues to be – greatly loved […] it is often a relief to be wrong.” Morrissey was about as “wrong” as humanly possible – the song is arguably the Smiths’ most popular song. In 2014 NME listed it as the 12th greatest song ever.

4. The backing vocals on Bigmouth Strikes Again are performed by Morrissey himself

It’s impossible to miss the high-pitched, feminine-sounding backing vocals on Bigmouth Strikes Again. While on the album these are credited to a mysterious ‘Ann Coates,’ the voice is actually just a heavily-edited rendering of Morrissey’s own dulcet tones. His pseudonym on the album was intended as a play on the Manchester area of Ancoats.

Initially, the group had intended to use a real female singer for the backing vocals – none other than The Pogues’ Kirsty MacColl. However both Morrissey and Marr came to realise that her voice wouldn’t work with the song and so they scrapped her contribution and subbed in the distorted version of Morrissey’s harmonies instead.

3. In Panic, the line “hang the DJ” refers to BBC DJ Steve Wright

Panic is another one of The Smiths’ best-loved songs. One of the most memorable parts of the tune has to be the “hang the DJ” refrain towards the song’s end – but not many people know the meaning behind this morbid line. Apparently, Marr and Morrissey were listening to a BBC Radio 1 show led by Steve Wright when a news report interrupted the broadcast to announce the Chernobyl nuclear disaster.

Jarringly, immediately afterwards, Wright reportedly played I’m Your Man by Wham!. Marr said of the incident: “I remember actually saying, ‘What the f**k has this got to do with people’s lives?’ We hear about Chernobyl, then, seconds later, we’re expected to jump around to ‘I’m Your Man’.” Hence the call to ‘hang the DJ.’

2. Marr formed the band after going over to Morrissey’s house and knocking on his door 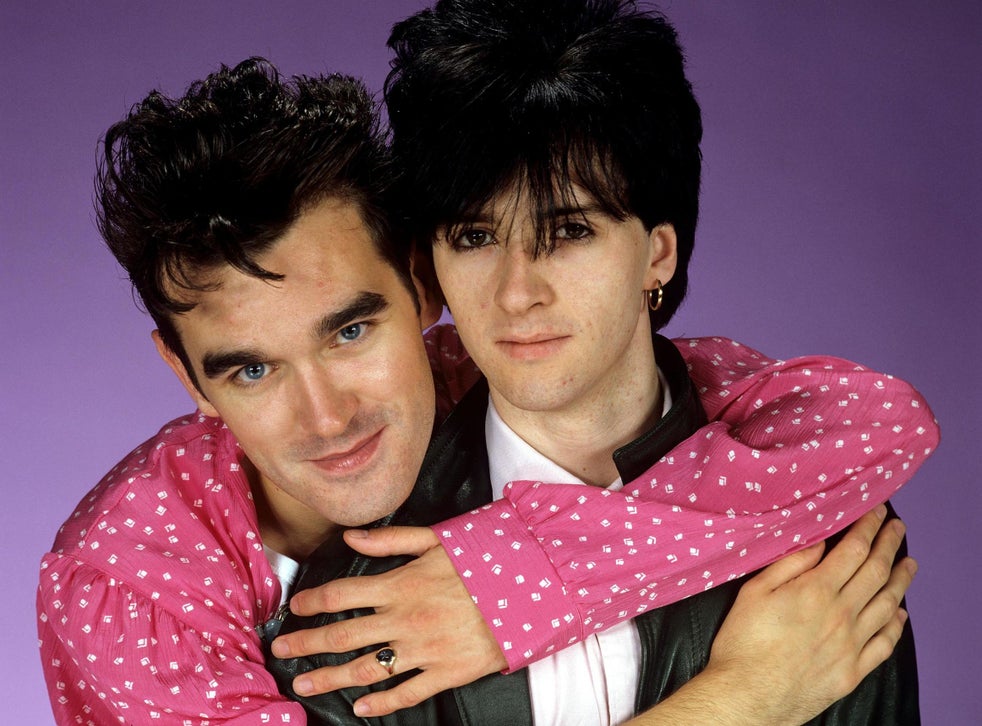 Back in 1982, 19-year-old Johnny Marr was looking for a singer to front his new band. He’d heard that a local guy called Morrissey was a decent vocalist, and so cut to the chase and decided he’d go and speak to him. Marr then found out where Morrissey lived – 384 Kings Road, Stretford – and simply turned up and knocked on his door. Marr said of the meeting: “There was no advance phone call or anything. I just knocked and he opened the door.”

Despite Marr’s boldness, the two got on remarkably well. They bonded over a shared love of music, including Patti Smith and The Velvet Underground, and poetry. The next day Morrissey called the young guitarist to let him know he’d be happy to form a band. “He was looking for someone like me and I was looking for someone like him. And we liked each other straight away. We really liked each other,” Marr said in the Guardian in 2016.

1. The Headmaster Ritual was based on Morrissey’s real school experiences 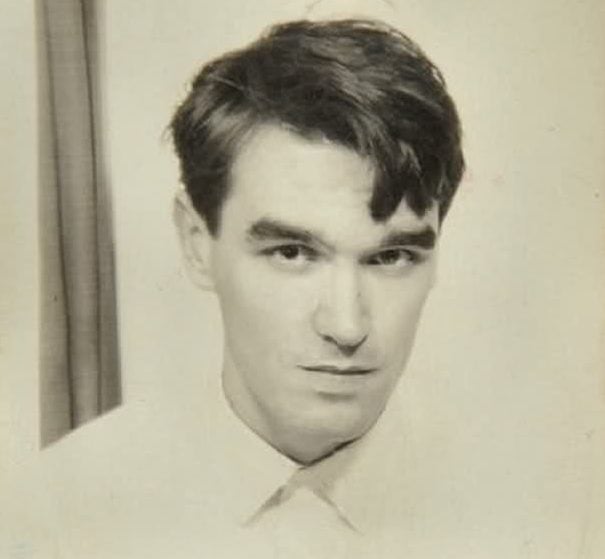 The Headmaster Ritual is an incredibly bleak song about the school experience – and, apparently, Morrissey was drawing on his own childhood memories when he wrote the song. According to the band’s biography, the song was based on a daily event that would happen every morning at Morrissey’s school.

“Assembly ended with the headmaster ritual,” Tony Fletcher’s 2013 biography reads. “Each morning, [the headmaster] selected a different item of the pupils’ dress or cleanliness for inspection. […] Those who failed to meet [his] exacting standards were sent down to his office to await his personal delivery of the ‘strap’ on their outstretched hand.”