After Gucci’s ‘blackface jumper’ and Katy Perry’s ‘minstrel shoes’, it didn’t seem to us like the beauty and fashion industry’s ‘racist style’ debate could get much dumber.

We now regret to report that we were, in fact, wrong. Buckle up, dear reader, for the charcoal face mask ‘controversy’. 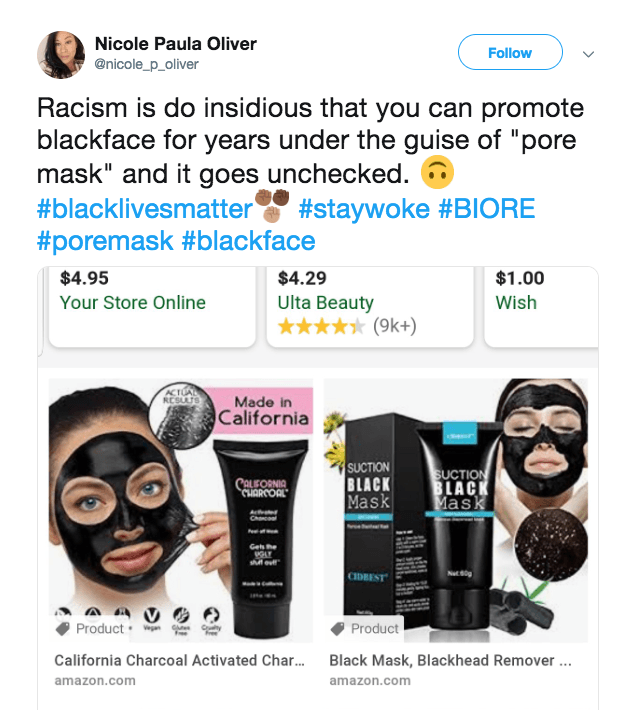 Earlier this month, it was revealed that Gucci had shelved a black jumper that for some reason was also designed to include half a balaclava and what resembled red ‘lips’ at the mouth.

Gucci apologised and immediately pulled the garment from stores after the design was compared to racist ‘blackface’ makeup.

After the Gucci gaffe, Katy Perry’s fashion line met with controversy for the line’s ‘minstrel shoes’, which were also withdrawn.

Now, a further debate is ongoing: whether or not charcoal face masks are just another example of ‘blackface’. 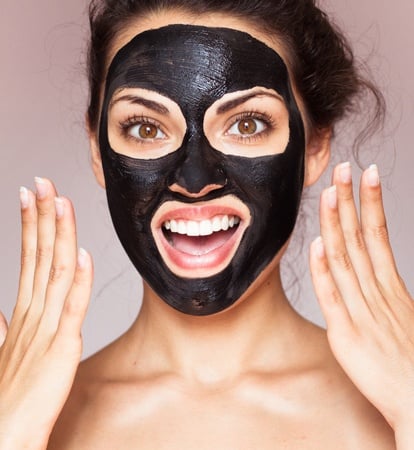 @nicole_p_oliver kicked off the discussion on Twitter, arguing that: “Racism is do (sic) insidious that you can promote blackface for years under the guise of “pore mask” and it goes unchecked”.

Meanwhile, @IsaacTheDead asked: “Aren’t we ever going to address how the Charcoal Mask takes blackface up to 11? You put it on, it looks really racist, then you pull off the black to get flawless skin”. 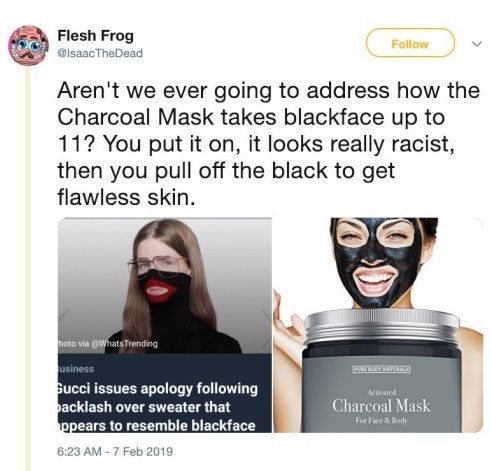 Eliz Bee fretted over her use of the product: “Charcoal masks look uncomfortably similar to black face. I feel weird and will be hiding in the bathroom for 8-10 minutes.”

These were isolated comments, of course, but wider reporting on this extremely niche view by the likes of the Metro and the Daily Mail quickly sent the rest of Twitter into outrage-meltdown.

I use this charcoal face mask for men and this is getting bloody ridiculous !!!! How is this racist ?? Sorry to all you snowflakes out there but we would like clean skin and we won't stop using it !!!!!! I won't stop using it because it's the only mask that actually works for me pic.twitter.com/AwE2Zx8NTV

“So now a charcoal face mask is racist? Ffs the snowflakes of today are ruining it for the children of the future!”, cried @nathfieldhouse, instantly confusing three comments for the views of an entire generation.

@hermosa_SI4L, meanwhile, wrote: “Just because a white person wants to clean their face like any other human being on this earth doesnt make them racist.”

It’s a point that probably nobody thought they would feel the need to make until today.