The Rendlesham Forest Incident: What Really Happened At ‘Britain’s Roswell’?

In late December 1980, around the time children were usually watching the skies in hopes of spotting Santa’s sleigh, something else was spotted through the trees of Rendlesham Forest in Suffolk. This wooded area in southern England has since gained notoriety as one of the most high-profile sites of a possible encounter with an unidentified flying object – a UFO – in history.

More than four decades later, there is still no definitive explanation of what went on and what was seen during what has become popularly known as ‘Britain’s Roswell’. However, in the minds of many, the Rendlesham Forest Incident stands as one of the most compelling recorded instances of contact with what some believe to be technology, or even life, of other-worldly origin.

What happened in Rendlesham Forest in December 1980? 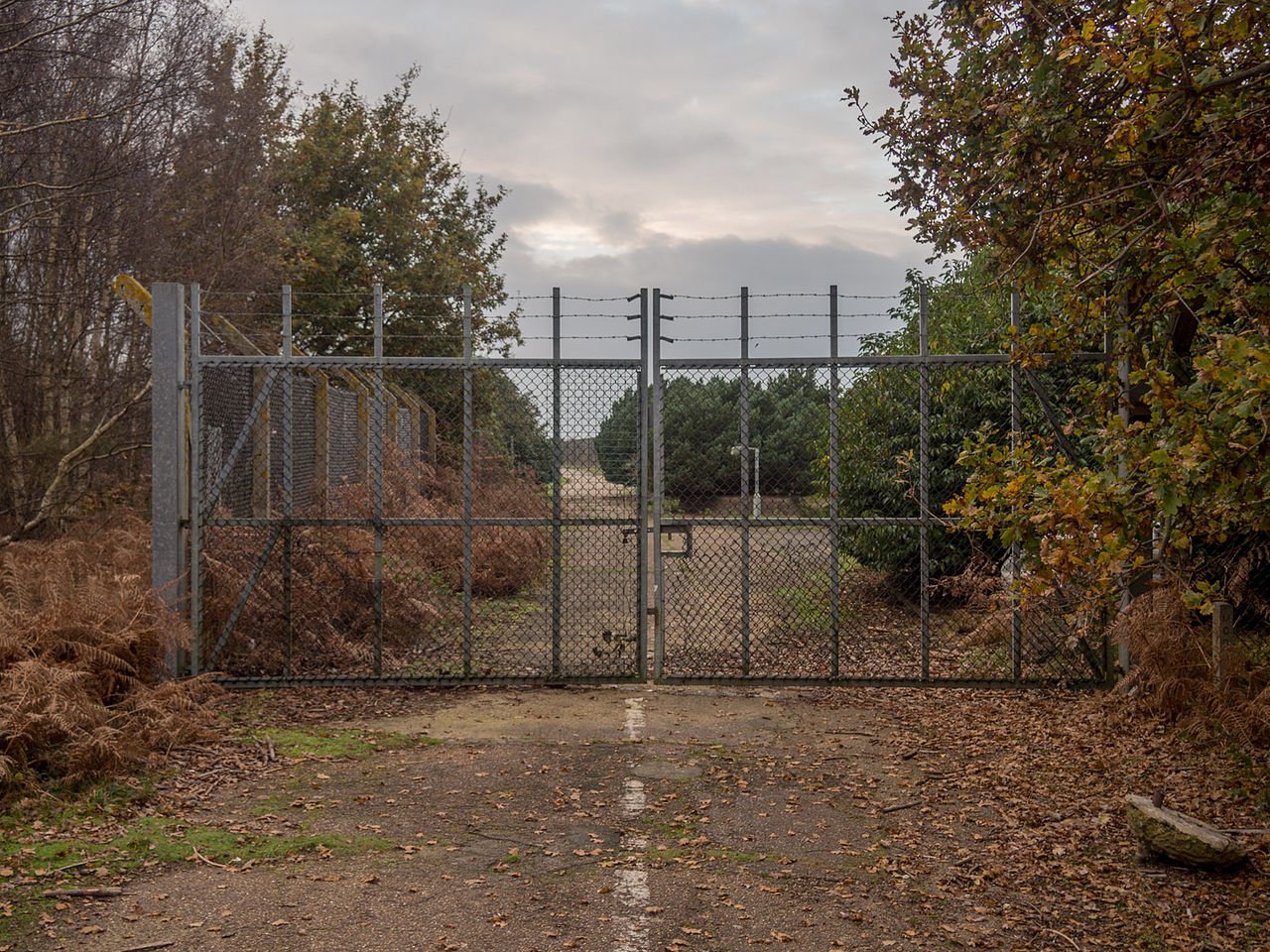 Rendlesham Forest in Suffolk is home to RAF Woodbridge, a former Royal Air Force station which was, at the time ‘Britain’s Roswell’ happened, being used by the United States Air Force. Around 3am on 26 December 1980, officers on a routine security patrol reported seeing lights descending into the forest over the east gate at the station. After calling in what they suspected to be a crashing aircraft, they entered the woods to investigate.

However, if the object in question was indeed an aircraft, it was unlike anything the officers had ever seen before. The official report handed in later by the station’s deputy commander Lieutenant Colonel Charles I. Halt declared that his officers saw “a strange glowing object in the forest… metallic in appearance and triangular in shape,” roughly two metres tall and two or three metres wide.

According to Halt’s report, the bright lights emanating from the object made it hard to tell whether it was hovering above the ground or held up on stilts, but as the officers got closer it moved away from them and disappeared into the forest. Animals at the nearby farm then “went into a frenzy,” but aside from a brief sighting near the station’s rear gate an hour later, the alleged object was not seen again that night. 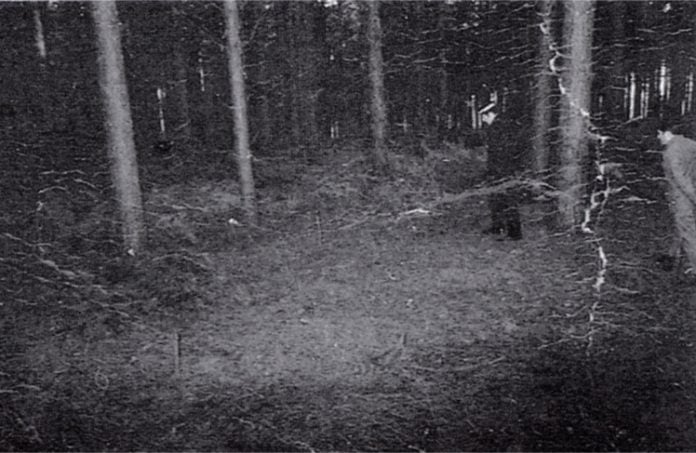 Returning to the site the following day, the officers (Halt among them) found impressions on the ground and surrounding trees that would seem to indicate the recent presence of an object of the size and shape described by witnesses. Then, later that night, the object seemed to re-appear.

Halt himself recalls seeing in the forest “a red sun-like light… [which] moved about and pulsed. At one point it appeared to throw off glowing particles and then broke into five separate white objects and then disappeared.” Moments later, the officers witnessed numerous balls of lights moving rapidly through the sky above, one of which remained visible for a few hours before fading from sight. 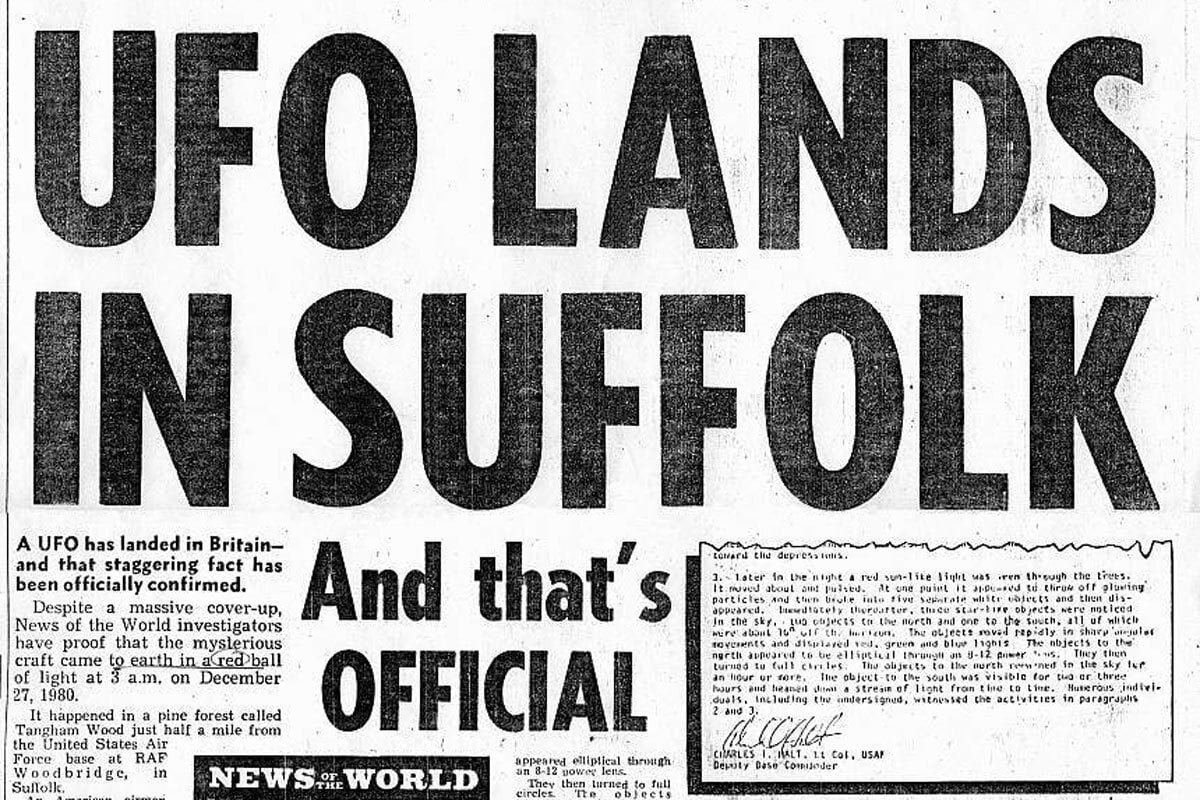 The Rendlesham Forest Incident did not become common knowledge until 1983, when Halt’s report was made public under the US Freedom of Information act. Naturally, the report was the cause of considerable excitement for many: the front page of British tabloid News of the World brazenly declared, “UFO Lands in Suffolk, and That’s Official.”

In the years since, one of the officers who witnessed the event, Sgt Jim Penniston, has gone into further detail, claiming he saw hieroglyph-like engravings on the craft and felt an electrical charge in the air as he approached it. Most startlingly, Penniston has claimed that on trying to touch the object, his mind was flooded with a vision of binary code (zeroes and ones). No other officers corroborated this.

How long have people been seeing UFOs? 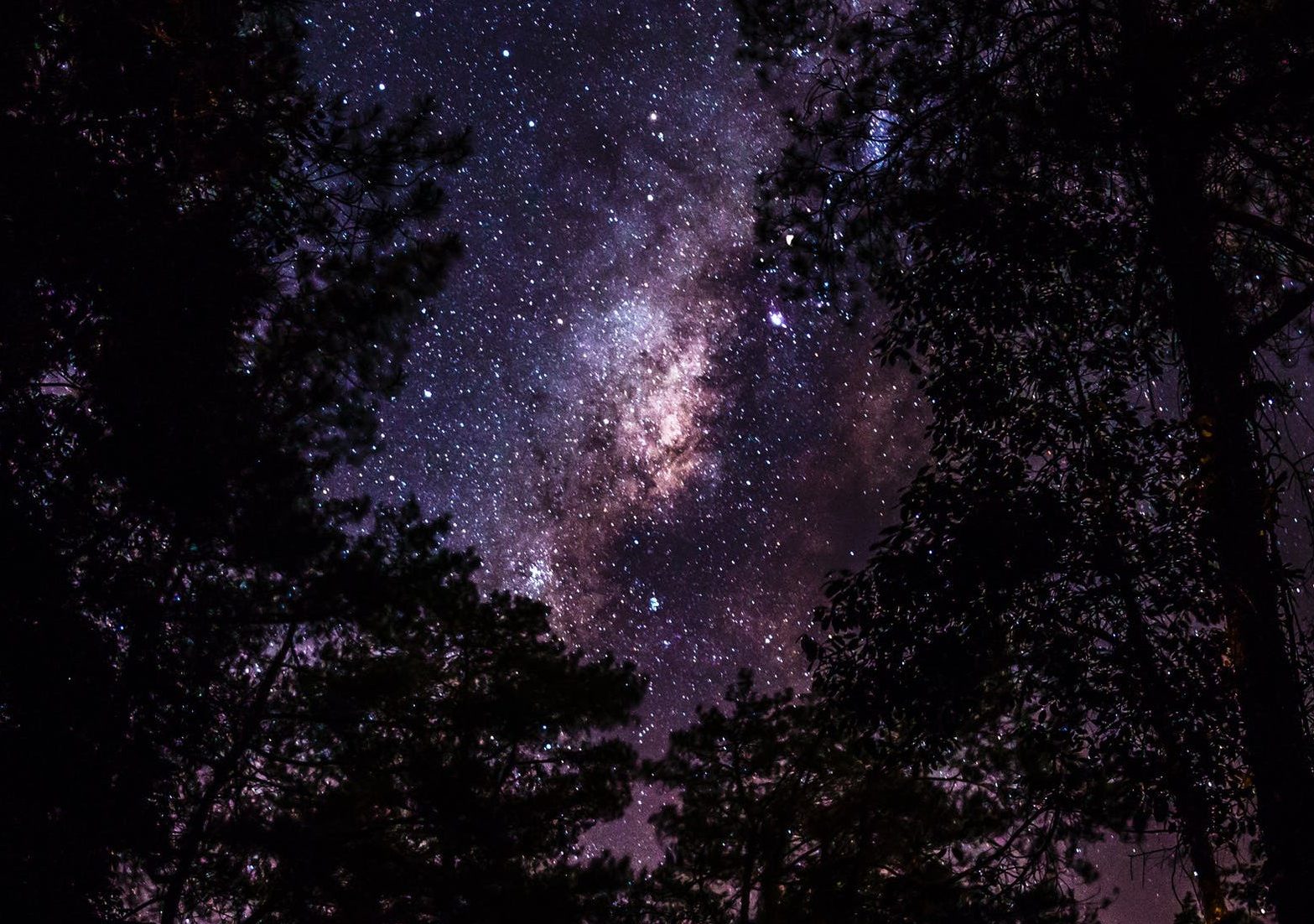 Sightings of mysterious lights and/or objects in the sky have been recorded throughout the centuries, dating as far back as ancient Rome. Such sightings would generally be attributed to the gods, but once the phenomenon picked up speed in the early 20th century, witnesses were more likely to interpret them as unknown aircraft.

Probably the most infamous UFO ‘incident’ occurred in July 1947, when debris from a crash at Corona, New Mexico was retrieved by officers from Walker Air Force Base, Roswell. Officers at the time told the press that the downed object was some sort of ‘flying disc,’ and there were reports of bodies nearby that did not look human. The US Army quickly intervened, officially retracting this statement and declaring the object to have been a weather balloon. 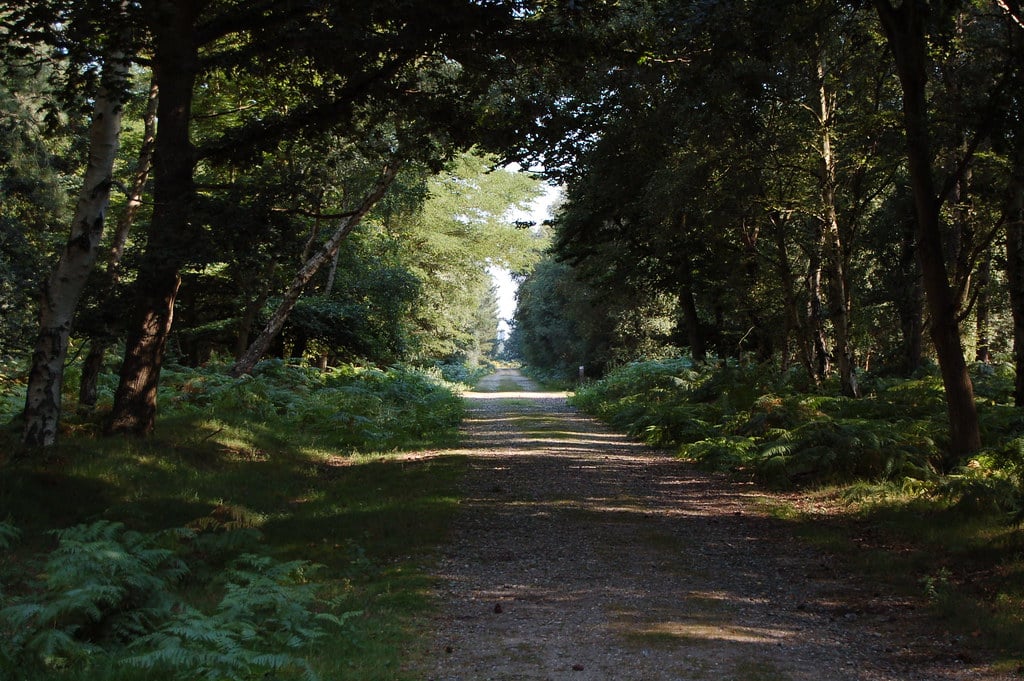 Neither the British nor American military appear to have deemed the Rendlesham Forest incident worthy of further investigation, after a preliminary enquiry by Britain’s Ministry of Defence ruled there was no evidence to back up Halt’s claims. Not unlike the official military explanation for the Roswell incident, this has only strengthened the view held by many that the governments of the world are covering up the truth about UFOs.

A key part of why Rendlesham is deemed so important by ufologists is the credibility of its sources. Claims of UFO sightings (and occasional abduction stories) tend to come from members of the public; it’s comparatively rare that accounts as detailed as those given of Rendlesham come in official military reports from someone as high-ranking as Lt Col Halt. Even though Sgt Penniston’s more extravagant claims have prompted greater scepticism, colleagues of the officer have vouched for his reliability. 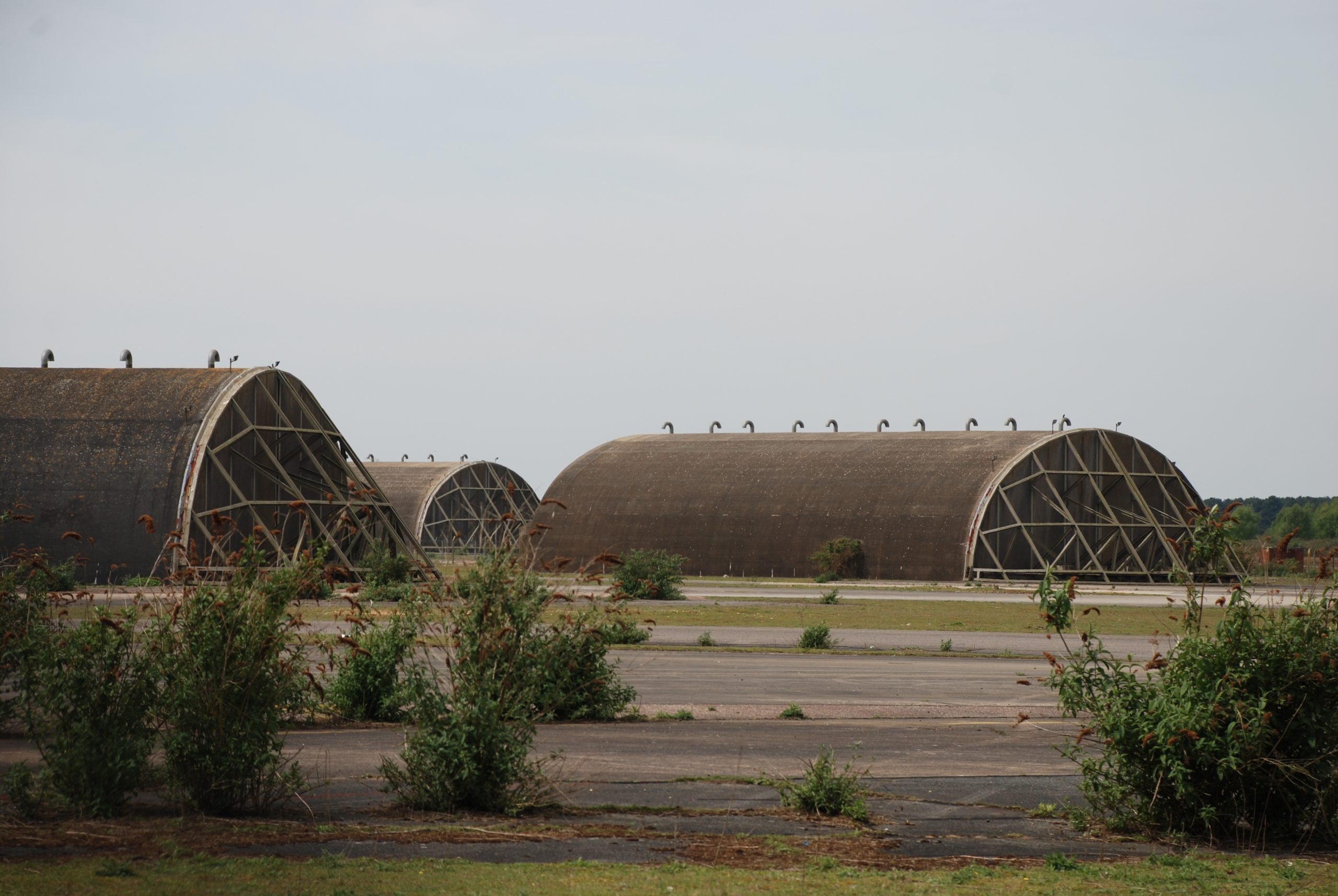 Not everyone is convinced that what happened in Rendlesham Forest that night was alien in nature. Vince Thurkettle, a local forestry worker at the time of the incident, has stated that when he excitedly visited the alleged landing site immediately after the event, “my heart absolutely plummeted… It was nothing. It was an absolutely normal glade in the forest with three rabbit scrapes, and they’re all carefully marked, that happened to be roughly in a triangle.”

Thurkettle also offered up an alternative explanation for the strange lights witnessed by the officers, suggesting this might have been from the Orfordness Lighthouse, situated roughly eight miles away from the site on the Suffolk coast.

While some have argued the lighthouse beam would not have shone inland, Thurkettle insists, “I’ve stood in the beam of the lighthouse. I’ve looked at it and the forest [at the same time].” 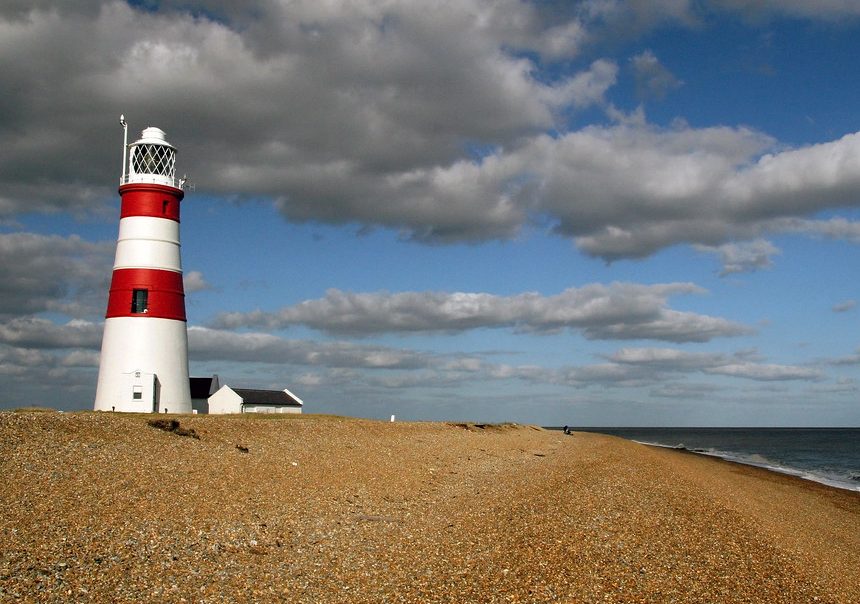 Astronomers have also suggested that the strange lights the officers saw were natural astral phenomena: perhaps meteors, or simply the stars themselves. As far as the mysterious ‘object’ goes, researcher Brenda Butler speculates that it may have been a fallen Soviet satellite (although there’s nothing to back this up). Others have simply concluded that it was a plain and simple hoax.

Today, neither RAF Woodbrige nor the Orfordness Lighthouse are in operation. However, interest in the event has seen a massive boom in local tourism; a trail leading to the alleged landing site is available to the public, complete with a mock-up of the mysterious triangular object based on the descriptions given by the officers. 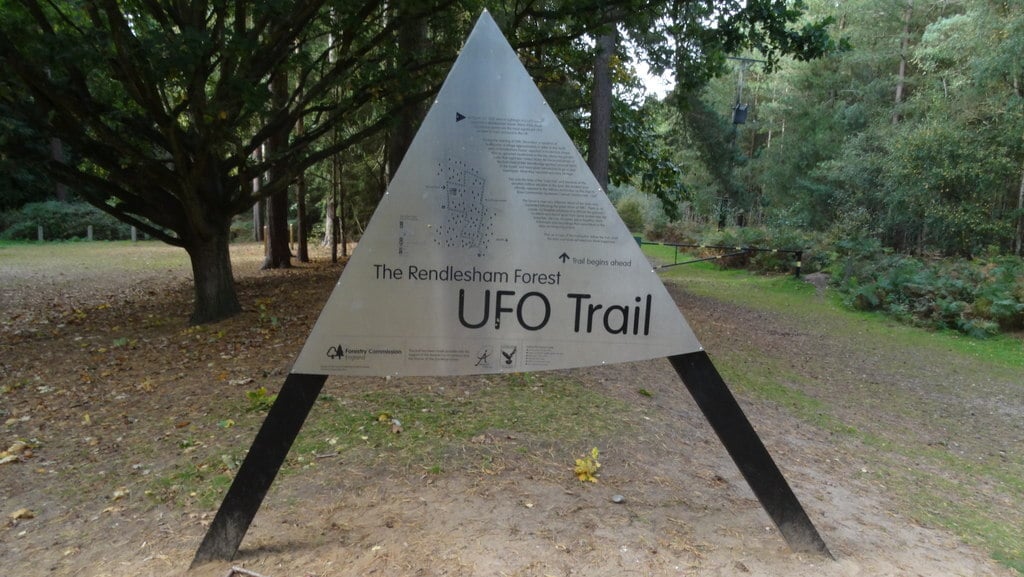 Recent years have seen many military files on UFOs made available to the public, confirming the validity of this phenomena. Still, before we start declaring that aliens are real and among us, we would do well to remember that the ‘U’ in ‘UFO’ stands for ‘unidentified.’

These objects might be secret experimental aircraft of earthly origin; they might be some as-yet unexplained weather phenomena; or there might yet be some other banal explanation. All we can do is keep imagining, as who knows when the truth will be revealed – even though, as The X-Files told us all those years ago, the truth is out there.