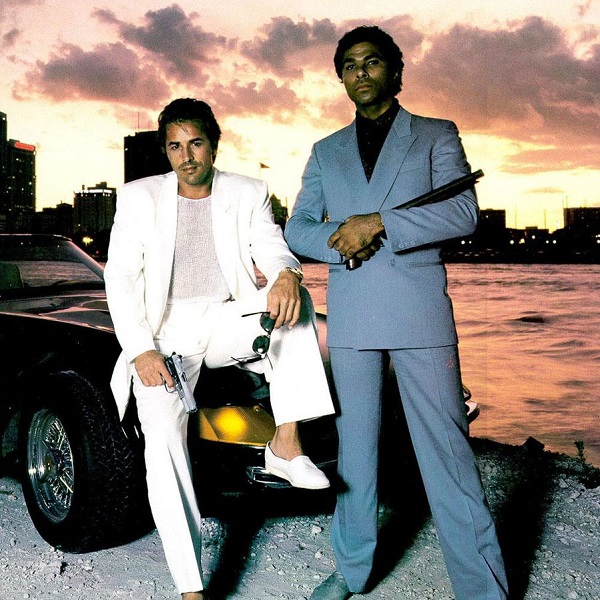 Like most decades, the 80s has long been defined largely by a particular aesthetic. Where the 60s brought flower power and the 70s brought glitter and disco, the 80s went sleek, metallic, neon-lit. Anytime you see the silhouette of a city skyline against a hazy twilight, it immediately screams 80s - and no TV show captured that vibe more perfectly than Miami Vice.

Premiering in September 1984, Miami Vice centred on Sonny Crocket (Don Johnson) and Ricardo Tubbs (Philip Michael Thomas), partnered Detective Sergeants in the vice unit of the Miami Dade PD. Working undercover in a glamorous world of high-price criminals, these cops aren't afraid to get their hands dirty, but they struggle with their inability to make real lasting changes to drugs and crime in the city.

Though created by Anthony Yerkovich (also a writer on Hart to Hart and Hill Street Blues), Miami Vice is best remembered as the baby of showrunner Michael Mann, who had not long since made his film directorial debut with 1981's Thief and would later make such hits as Manhunter, The Last of the Mohicans and Heat. Mann is largely held responsible for ensuring that Miami Vice wouldn't look and sound like any other cop show, bringing the fashions of the time to the forefront to create something way more stylish. As well as dressing the stars in designer suits and giving them top of the range sports cars, Miami Vice also boasted a cutting edge contemporary soundtrack: the synth-driven theme music by Jan Hammer became a classic of the era.

As they were aiming a bit higher than the average small screen police drama, they looked beyond the small screen when casting. Jeff Bridges, Nick Nolte and Mickey Rourke were among the big name stars considered for the role of Crockett before Don Johnson landed the role, which won him superstardom - as well as the 1986 Golden Globe for Best Actor in a TV Drama. The years that followed saw endless men try (and usually fail) to pull off Crockett's distinctive dress sense: linen suits, pastel-coloured T-shirts and espadrilles.

A popular sensation for its first three seasons, Miami Vice's ratings eventually dwindled until its cancellation in 1990. Michael Mann revisited the property with the 2006 Miami Vice movie, starring Colin Farrell and Jamie Foxx as Crocket and Tubbs.