How R Lee Ermey Went From Vietnam To Hollywood

1987’s Full Metal Jacket is one of the most highly regarded movies made about the Vietnam War, and a huge part of what makes the film so memorable is R Lee Ermey as ruthless drill instructor Gunnery Sergeant Hartman. But it wasn’t acting skill alone that helped Ermey give one of the most iconic war movie performances.

Prior to his move into film and television work, Ermey had served in the United States Marine Corps, eventually becoming a drill instructor for real. Unlike Gunnery Sgt Hartman, however, Ermey did see service in Vietnam – and it was something the unlikely Hollywood star rarely liked to talk about. 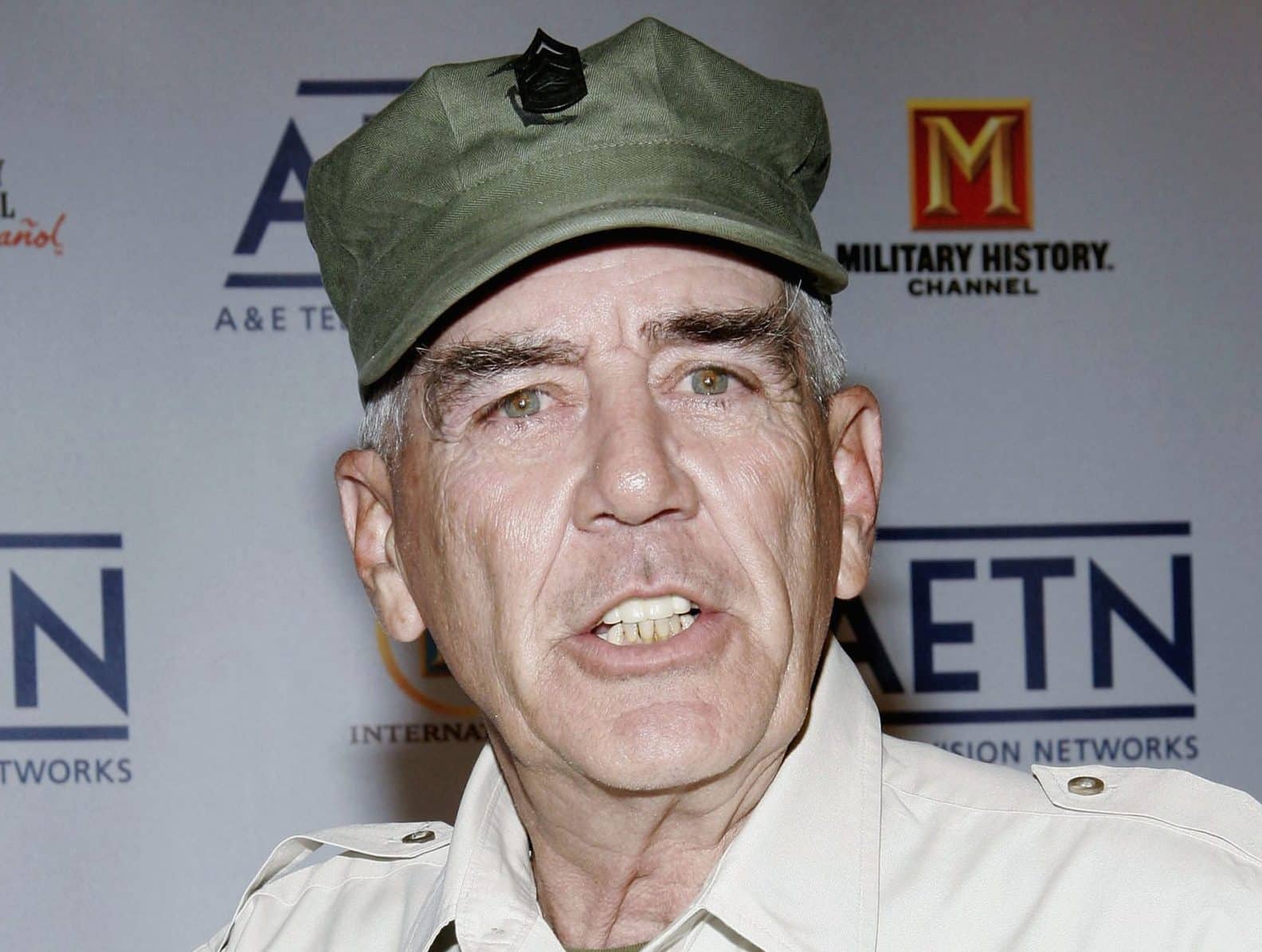 Ronald Lee Ermey was born in Emporia, Kansas on March 24, 1944, and grew up on a farm with his parents and five brothers. He was familiar with guns from an early age, once recalling, “I used to hunt my way to the bus stop on the way to school every morning…I would stash my gear, my game and shotgun in a culvert, get on the bus and then hunt my way back home after school.”

The family later moved to Zillah, Washington, where Ermey had a tendency to get in trouble. By the time he’d turned 17, Ermey had been arrested twice, and was issued a stark ultimatum by a judge: “He said I could either go into the military – any branch I wanted to go to – or he was going to send me where the sun never shines. And I love sunshine, I don’t know about you.”

As his father had served in the US Navy, this was Ermey’s first port of call, but he was immediately refused entry due to his criminal record. Ermey instead enlisted in the United States Marine Corps in 1961, and was put through boot camp training at San Diego’s Marine Corps Recruit Depot – where, years later, he would serve as an instructor himself. 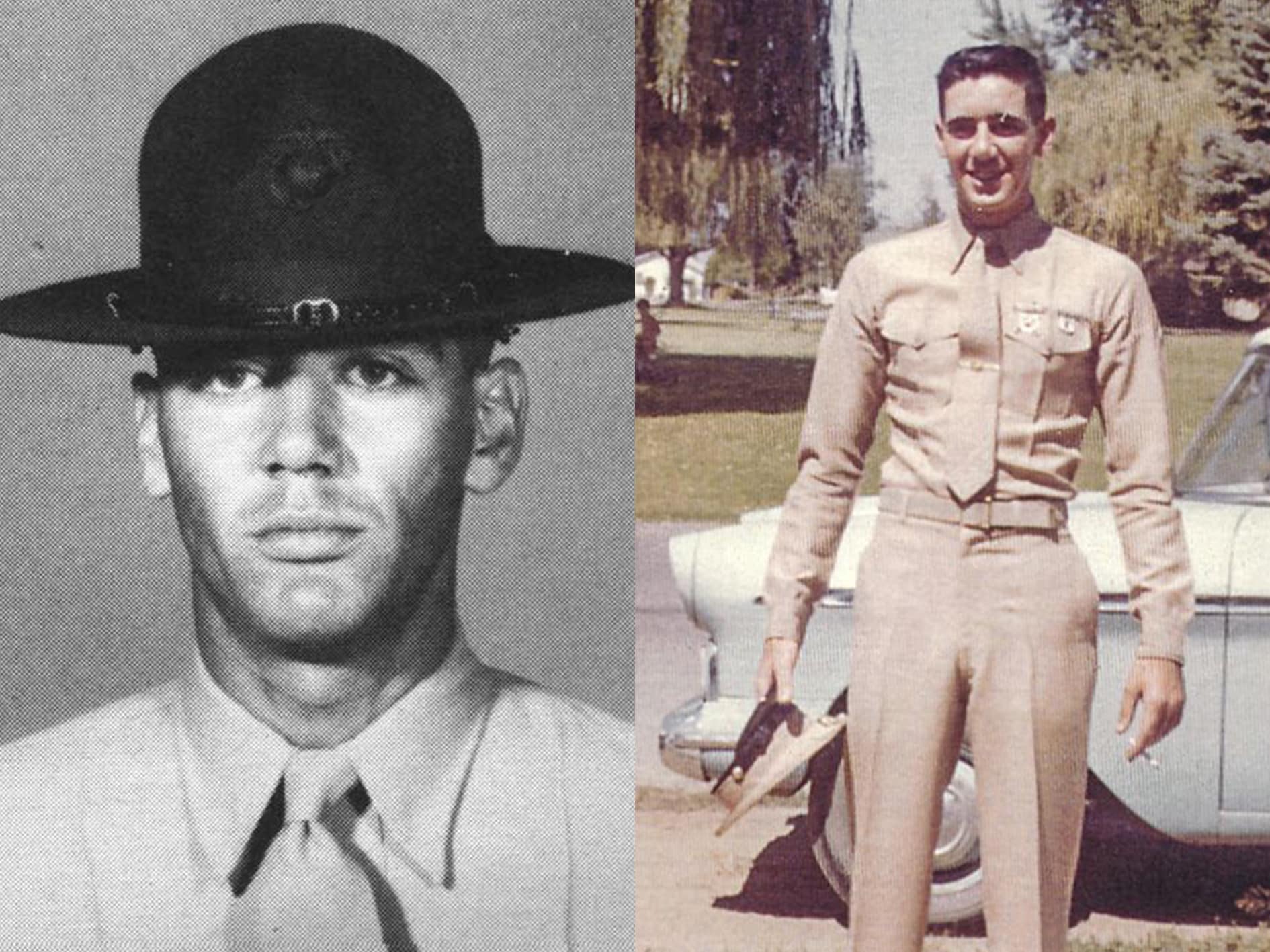 Given the nightmarish training scenes of Full Metal Jacket, one might imagine that Ermey had gone through a similarly gruelling ordeal. However, Ermey later reflected, “actually boot camp was easy. My father was more of a disciplinarian than any drill instructor down there that I knew of.”

Having felt isolated as a youngster, with no real friends of his own beyond his siblings, Ermey felt that in the Marines he “had all kinds of playmates, all kinds of brothers and friends. I like that aspect of it.” Ermey liked it so much that, when his initial four-year period of service ended, he decided to stick around rather than return to the farm.

Ermey re-enlisted, becoming an instructor himself from 1965 to 1967. Of his time training new recruits, Ermey admitted to having some ambivalence: “I would rather have been out fighting in the war rather than training people to fight the war but that’s the way it works.” The war in question was of course the conflict in Vietnam, which had begun in 1955 and proved more difficult and lasted far longer than anyone had anticipated – and eventually, Ermey got his wish. 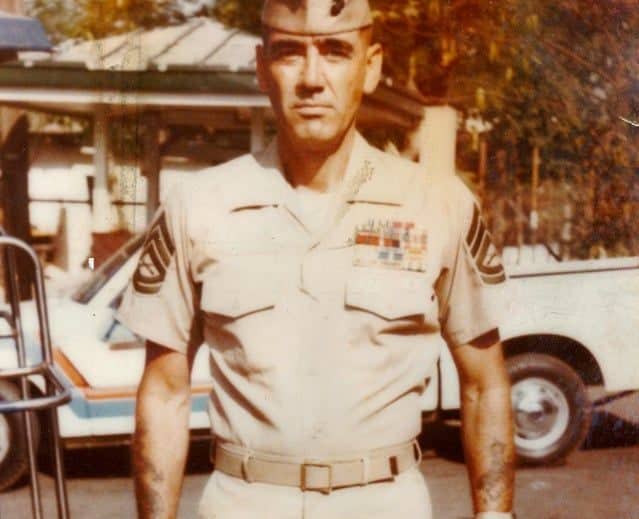 In 1968, Ermey would ship out to South Vietnam and serve 14 months in country with Marine Wing Support Group 17. Ermey’s tour included four months spent in hospital, after he took shrapnel wounds in his back and arm in combat. (The New York Times would report it was a “rocket” that caused Ermey’s injuries.)

Like a lot of military veterans, Ermey would later in life be reluctant to speak about his war experiences. Ermey told the New York Times in 1987, “If a person’s wife and children were killed in a terrible automobile accident, 20 years later it will bother him to talk about it.” Ermey would later describe his work on Full Metal Jacket as being like “good therapy”.

After Vietnam, Ermey served as a staff sergeant in Okinawa before being retired in 1971 on medical grounds, owing to the injuries he sustained fighting in Vietnam. The sudden, involuntary end to his career in the USMC was not something that Ermey found easy.

“The toughest part of the transition was leaving my friends behind because every friend that I had in the world was back there… I was a grunt. I was an instructor. There’s no big call for grunts or drill instructors or people running up a hill to kill the bad guys in civilian life.” 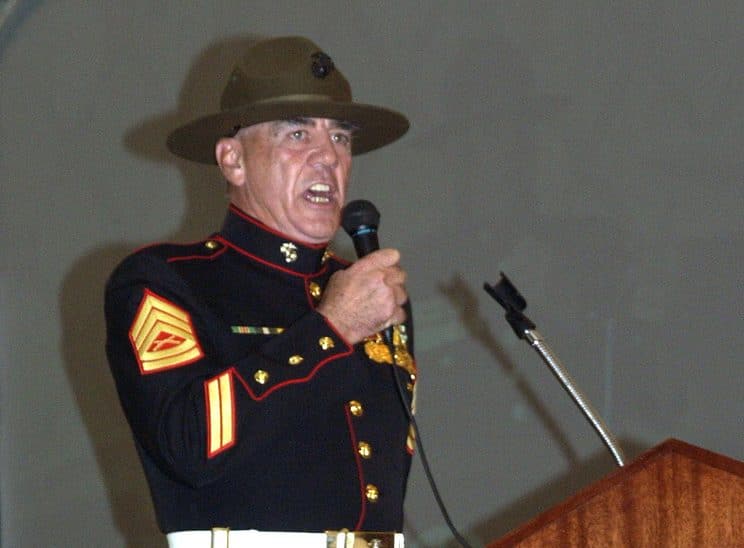 Ermey remained in Okinawa for several years, owning a number of bars (and a “wh***house”) there, but would later relocate to the Philippines due to business opportunities presented by a new entertainment industry boom: movies and TV shows about the Vietnam War. Due to its similar jungle terrain and the incentives offered to filmmakers by its government, the Philippines quickly became the go-to destination for productions dealing with the conflict.

Ermey got word that filmmakers out there needed technical advisors with military experience, and saw a chance to break into show business. “I said, here’s my chance. Here’s the door. Here’s the big door that’s going to come open for me. It would get my foot inside the door to impress the appropriate people.”

Ermey promptly enrolled at the University of Manila to study drama, and set about finding advisor positions on local productions – then, once he had his foot in the door, sneaking his way into small acting roles. He made his debut with an uncredited appearance as a helicopter pilot in arguably the single most esteemed Vietnam movie of them all: Francis Ford Coppola’s Apocalypse Now (shot in 1976, although not completed until 1979). 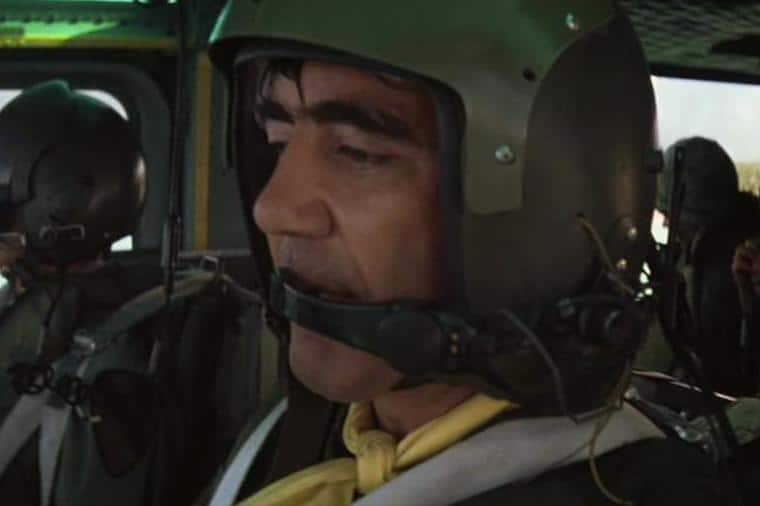 Ermey followed Apocalypse Now with small roles in two more Vietnam movies, The Boys in Company C (in which he played a drill instructor) and Purple Hearts. He also did uncredited work as a technical advisor on An Officer and a Gentleman, and was originally cast as Gunnery Sgt Emil Foley before the director decided to instead give the role to Louis Gossett Jr (who would win an Oscar for his performance).

Then, in 1985, Ermey found himself hired in another technical advisor role on Full Metal Jacket, a film from notorious perfectionist director Stanley Kubrick. Recognising that the film’s drill instructor Gunnery Sgt Hartman was a potential breakthrough role, Ermey asked Kubrick to consider him for the role – but on the basis of his similar part in The Boys in Company C, Kubrick turned him down, telling Ermey that he wasn’t intimidating enough.

To plead his case, Ermey shot an audition tape in which he roared improvised obscenities in the faces of real-life British Royal Marines who were being considered as extras for the film. After seeing this, Kubrick realised that Ermey would be perfect for the role, and fired the actor originally cast, Tim Colceri. (Colceri would still make a scene-stealing appearance as Full Metal Jacket’s helicopter door gunner, who repeatedly yells “get some!”) 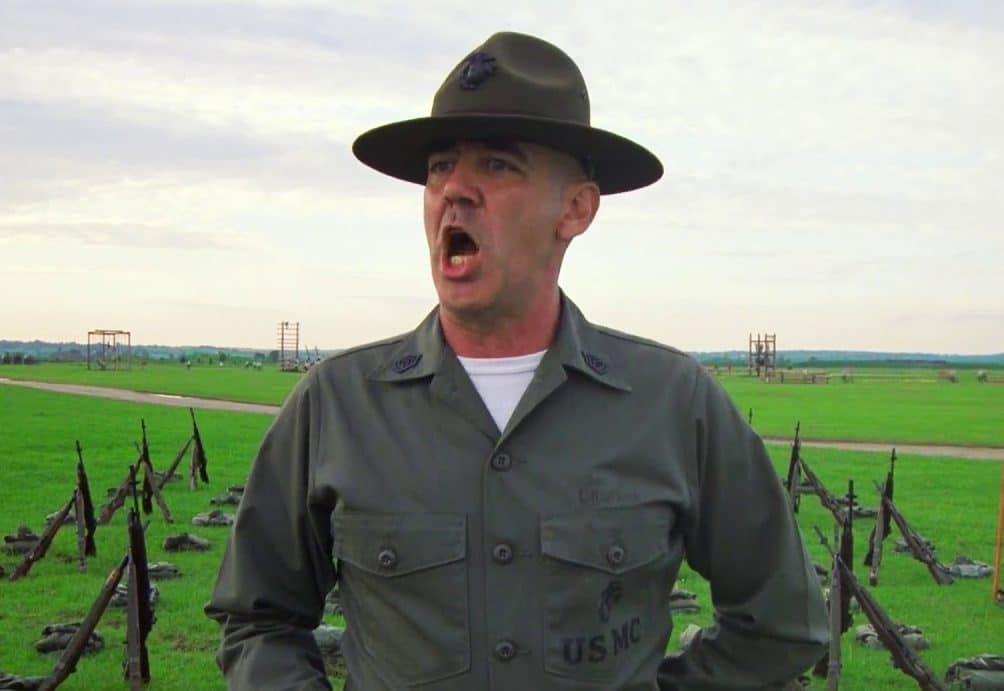 Ermey made significant contributions to Full Metal Jacket’s script. His ad-libs were transcribed and added to the screenplay, and in the end Kubrick estimated that Ermey had contributed at least 50% of Hartman’s dialogue in the final film (although this wasn’t enough to get the actor a co-writer credit).

Ermey’s presence on set made things even more intense for his young co-stars. Private Joker actor Matthew Modine recalls, “there was no method acting to the training that we were doing. We were learning to be recruits and we were being trained by a person who was a former drill instructor…

“And so, the things that we were put through were the things that people actually go through in boot camp. We just did it for a much longer period of time, and over the course of a shooting day, it could be 12 to 14 hours of training. So it was exhausting, but ultimately, it was rewarding because after all this time, we’re still talking about the film. That just doesn’t happen often.” 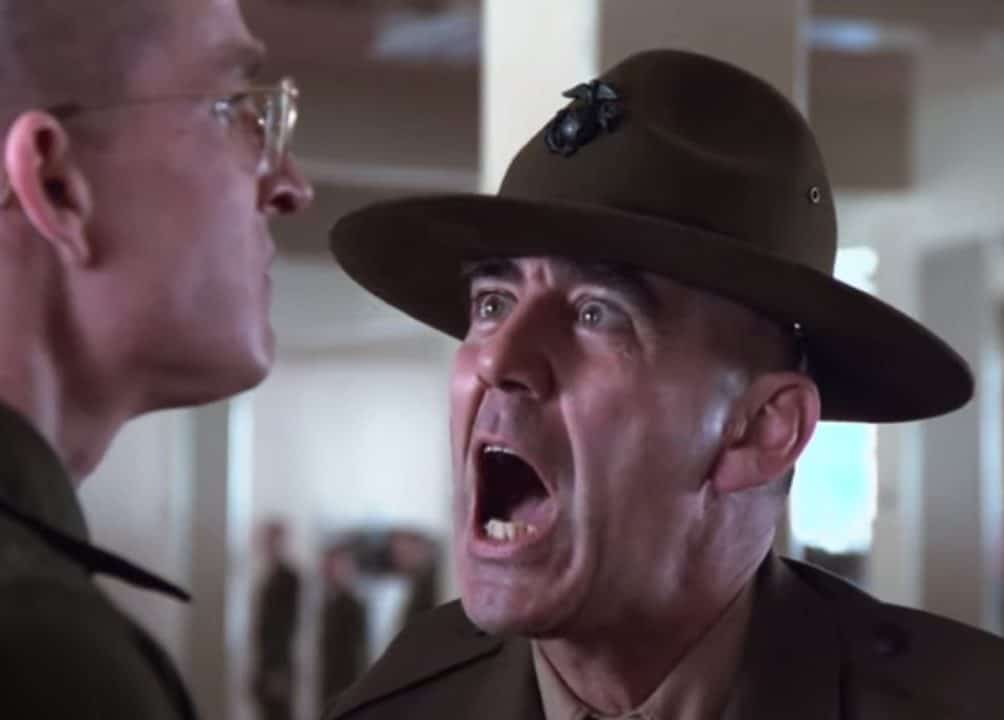 Alas, while shooting a movie about the war should have been a great deal safer than being in the war, Ermey had a serious accident during the Full Metal Jacket shoot. The actor was driving home from the set in Epping Forest, England at 1 o’clock in the morning when he crashed his car on a country road.

Stanley Kubrick told Rolling Stone, “He broke all his ribs on one side, just tremendous injuries, and he probably would have died, except he was conscious and kept flashing his lights,” which alerted a passing motorist to his presence. Production on the film had to be delayed several months to allow Ermey time to recover. 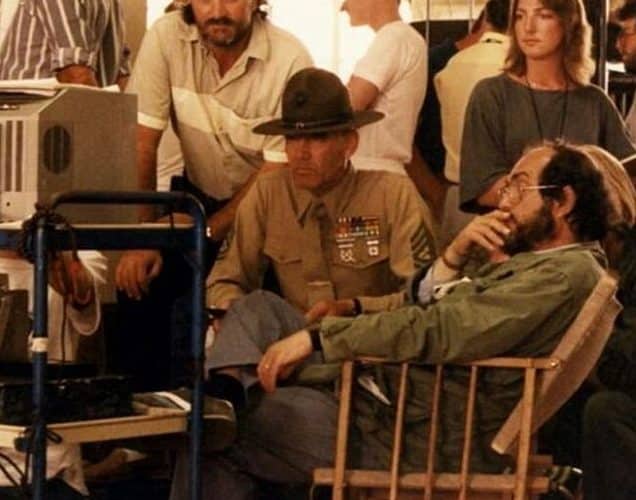 On release in 1987, Full Metal Jacket proved a big hit, earning $120 million worldwide. It was also well-received by critics, with particular attention given to Ermey’s scene-stealing performance. He soon landed a Best Supporting Actor nomination at the Golden Globes, and won the award in that same category from the Boston Society of Film Critics.

As it was known that Ermey had himself been a drill instructor for real during the Vietnam War, naturally there were questions asked as to how close the actor’s own personality was to that of his performance in the film. Ermey was quick to dispel any notions that he and Gunnery Sgt Hartman were in any way one and the same, although he acknowledged that such men did exist. 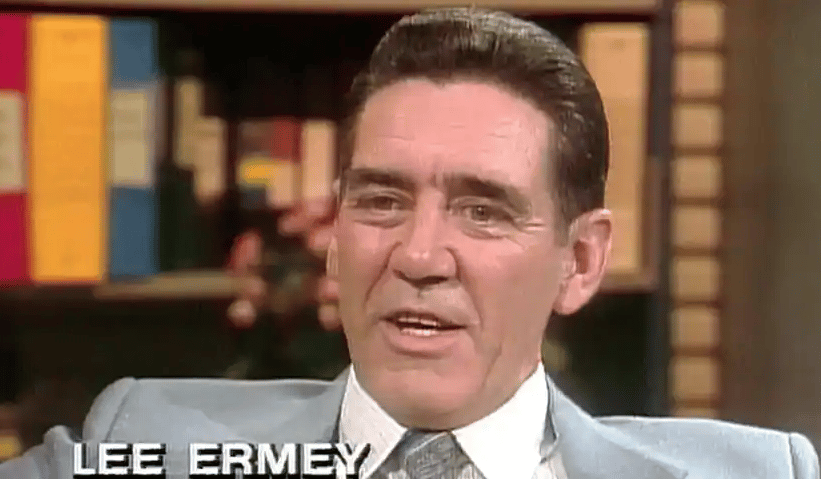 The actor told CBC, “A drill instructor is an actor. Nobody’s that nasty,” and emphasised, “physical or verbal abuse is not now and was not then condoned by the Marine Corps… [but] in some cases we had these individuals that seemed to think that they could take it upon themselves to do things and get by with it. And Hartman was one of those people, and it did go on.”

Full Metal Jacket firmly established Ermey as an actor, and from there he went on to a long and varied career. Unsurprisingly, a great many of his roles called upon him to again play over-the-top militant characters, including his voice acting role as Sarge in the Toy Story series, and playing the ghost of a soldier in The Frighteners. He also appeared as another uptight drill instructor in a 1992 Coors Light commercial, opposite a digitally-augmented John Wayne. 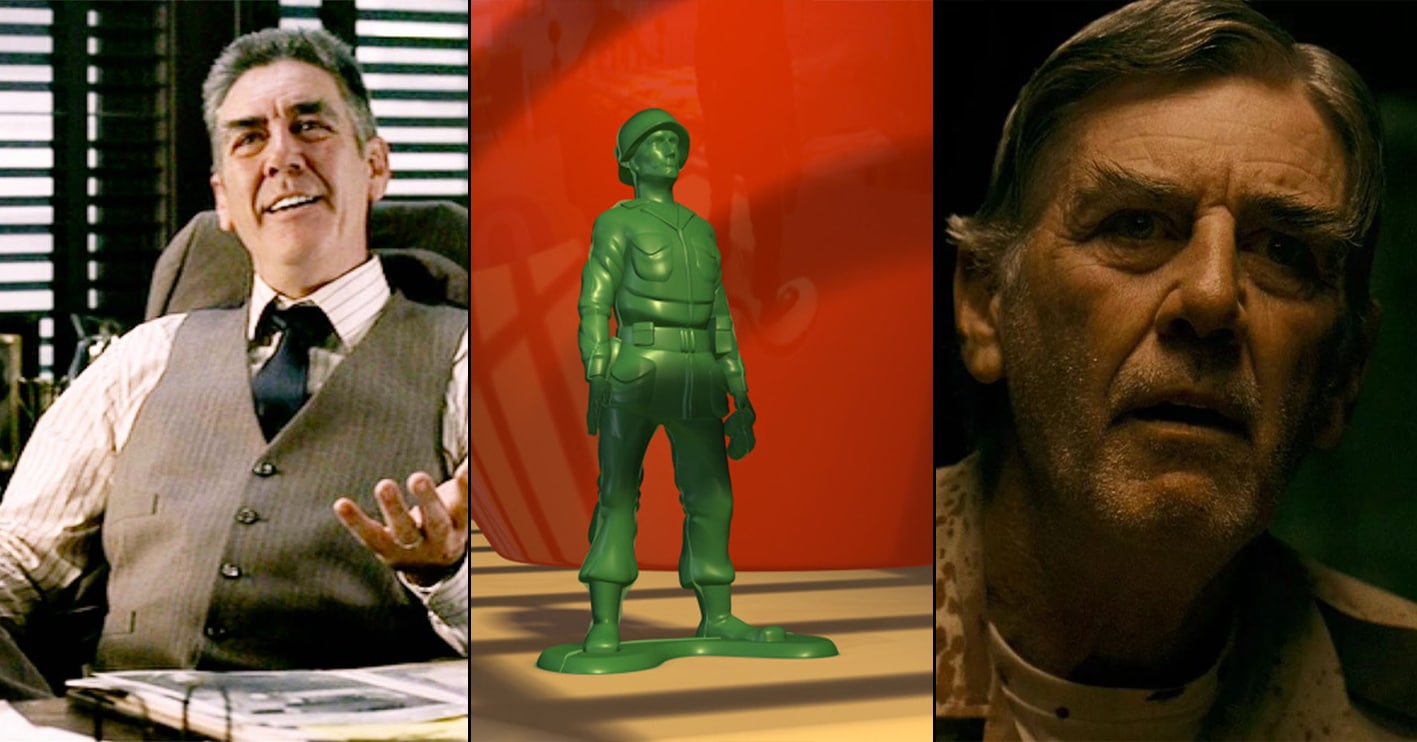 Through it all, Ermey remained proud of his time in the USMC and an outspoken supporter of the military. Because of this, in 2002 Ermey became the first retired Marine to receive an honorary promotion to Gunnery Sergeant (the same rank as his Full Metal Jacket character). 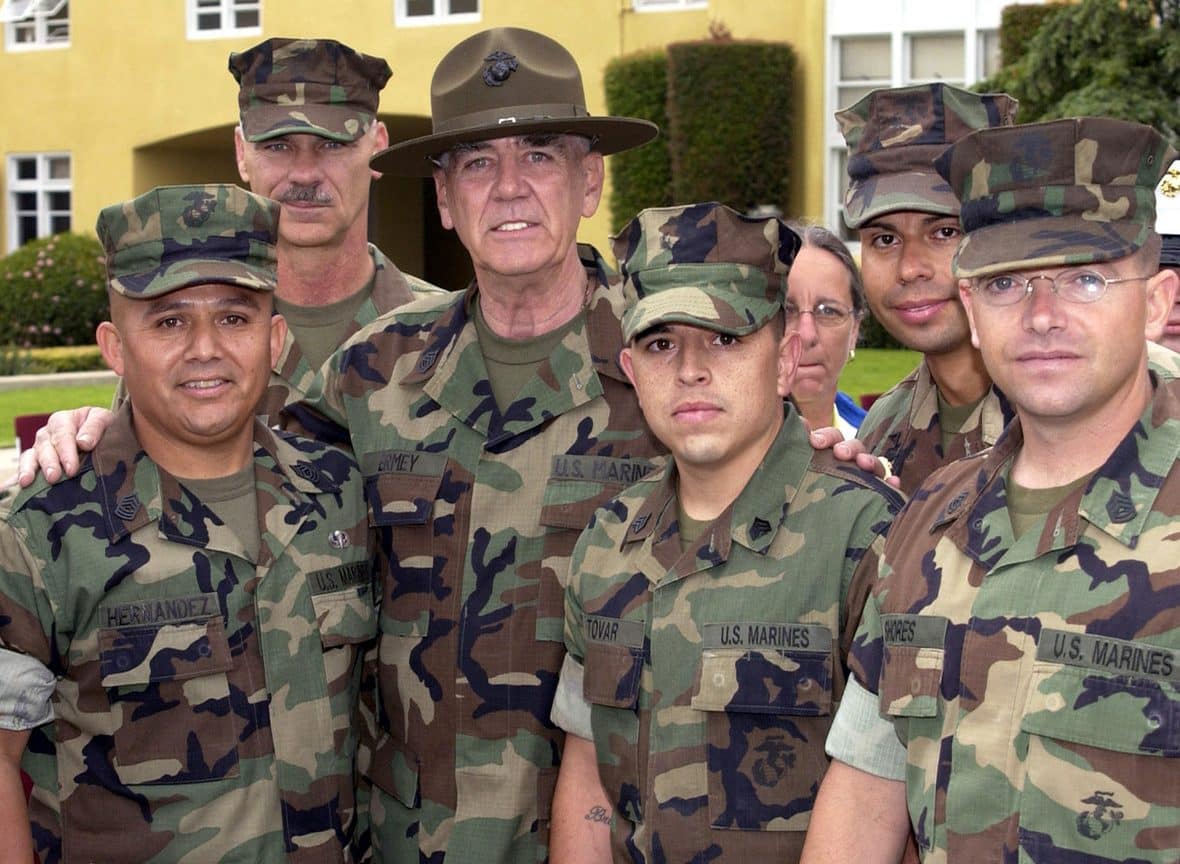 R Lee Ermey passed away from complications related to pneumonia on April 15, 2018, just three weeks after turning 74. He was given a military funeral at Arlington National Cemetery in Virginia, although the demand for burials at the illustrious site meant his ashes could not be interred until the following January. He was survived by his wife, six children, grandchildren and great-grandchildren.

His old Full Metal Jacket trainees remembered him with love. Private Pyle actor Vincent D’Onofrio declared on Twitter, “Ermey was the real deal. The knowledge of him passing brings back wonderful memories of our time together,” whilst Modine tweeted, “#SemperFidelis Always faithful. Always loyal. Do not go gentle into that good night. Rage, rage against the dying of the light. RIP amigo.”