To date, Danny Devito and Michael Douglas have co-starred in four movies and one TV show (Romancing the Stone, The Jewel of the Nile, The War of the Roses and Solitary Man; TV’s The Kominsky Method), with Douglas also having produced two further movies starring DeVito (One Flew Over the Cuckoo’s Nest, The Rainmaker). By now, DeVito and Douglas have been regular collaborators for almost five decades. Incredibly, though, their relationship goes back even further – back to before either man was famous. 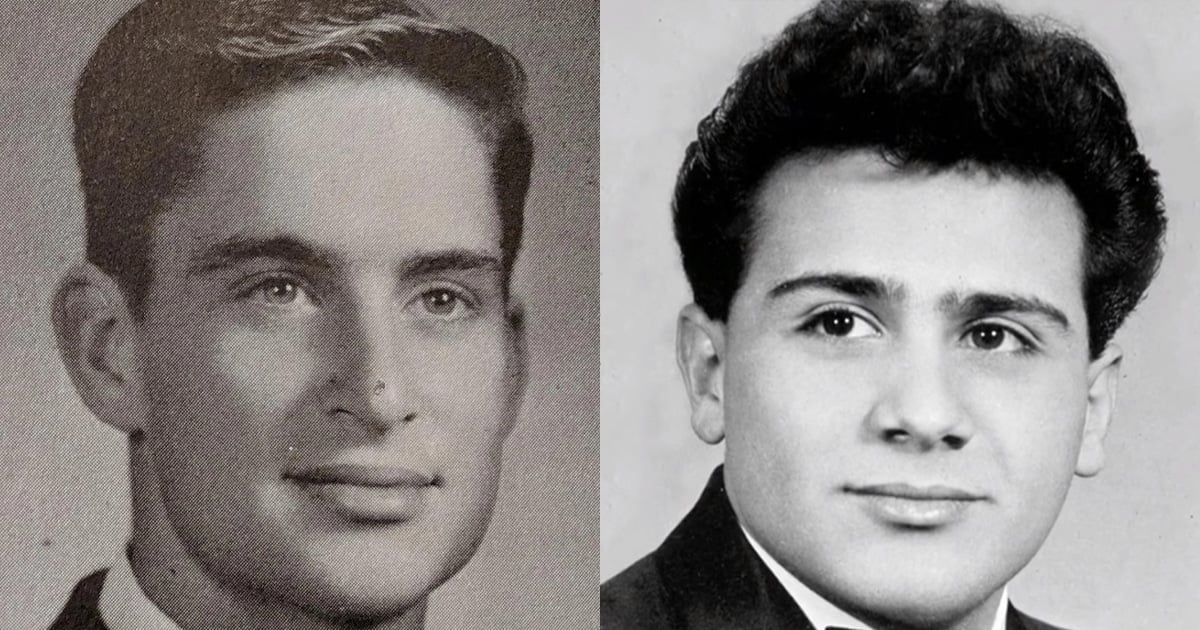 Originally, neither man considered pursuing an acting career. Douglas insists that, despite his father’s acting success, he chose theatre as his major at the University of California more or less by default. DeVito, meanwhile, ended up at drama school in New York by an unexpected route: he was studying to be a beautician, and could only receive makeup lessons by also enrolling into acting classes. After doing so, he found acting to be a better fit.

Despite them coming from the same neck of the woods, Douglas and DeVito would not cross paths until they were both 22, and miles away from home. Douglas and DeVito met for the first time at the Eugene O’Neill Theater Center in Waterford, Connecticut, where many of the young aspiring actors – among them Douglas and DeVito – were helping to build a new amphitheater. 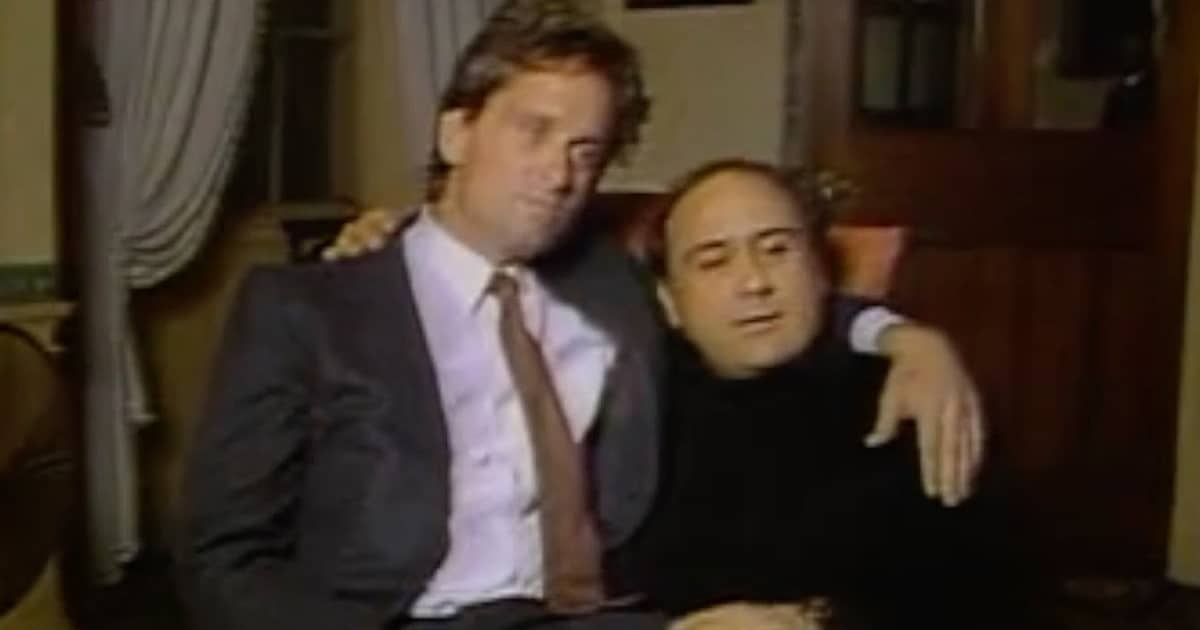 It was summer, 1966, the era of the hippies, and by Douglas’ account the two men met in what we can assume to be typical circumstances at the time. “I was on the beach, looking out at the Long Island Sound and this guy walks up to me, with this long head of hair, if you can imagine. He says ‘You get high?’ … so we smoked a joint and that was the beginning of a long, long friendship.”

DeVito remembers things a little differently, although intoxicants were still involved. Assigned to the same Waterford dormitory as Douglas, DeVito says he “was just coming through with a play, just visiting [Connecticut], and Michael was a resident… we were building an amphitheater and it was hot. We were all moving cement blocks around and somebody said, ‘Is anybody gonna go on a beer run?’ It was Michael. And I said, ‘Yeah, I’ll go.’ We were best friends right away.”

The two men bonded by what Douglas calls “attenuated immigrant roots”, it became a common sight to see DeVito riding around Connecticut on the back of Douglas’ motorcycle. Soon thereafter, Douglas went back out west to resume his studies at the University of California Santa Barbara. After DeVito landing an audition for the film In Cold Blood (he didn’t get the part) he went to visit Douglas – and his first California experience proved eye-opening. 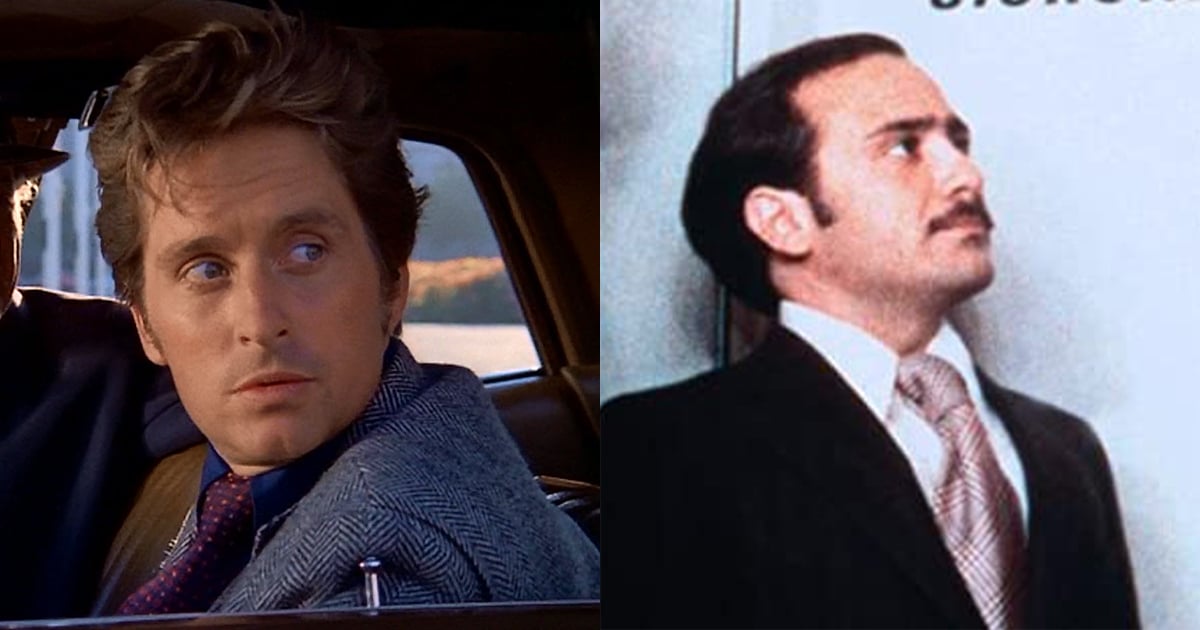 DeVito recalls, “I’m a guy from Jersey and I always wanted to be out in California. I just didn’t expect that I was going to go to ‘Juliet of the Spirits’ parties. I mean, I’m a modest Italian boy – I would never take my clothes off and go into a swimming pool. And Michael is the bad influence on that. We got naked and went into swimming pools. Let it be known that we basically legalized marijuana [back then].”

This swinging bachelor lifestyle continued when, in 1967, Douglas graduated and went back east, to New York, where he would share an apartment with DeVito as the two men started out on their acting careers. DeVito told Jonathan Ross in 2019, “The thing about Michael is, he’s a very unassuming, very nice guy, very sweet – but a babe magnet. So anywhere he went, you could be sure there’d be a buzz around him.”

By the mid-70s, both men were working steadily. Douglas landed the more high-profile job with a supporting role on TV cop show The Streets of San Francisco, whilst DeVito clocked up many theatre credits and some minor roles in largely forgotten films (Lady Liberty, Hurry Up or I’ll Be 30, Scallawag).

At the same time, Douglas was also trying to break into film producing. Years earlier, his father Kirk Douglas had appeared in a stage adaptation of Ken Kesey’s novel One Flew Over the Cuckoo’s Nest, to which he had also purchased the film rights. This presented a great opportunity to Michael. 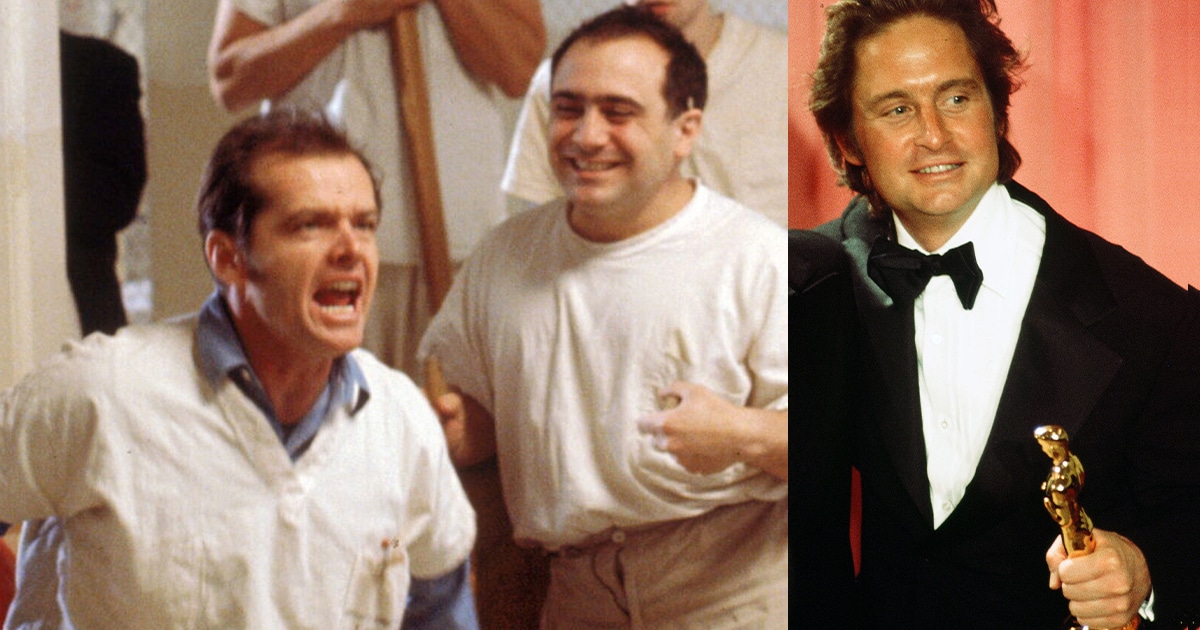 After trying without success to get One Flew Over the Cuckoo’s Nest made, the elder Douglas gave the rights to his son – and, as coincidence might have it, when Michael was setting up the project as producer, DeVito was appearing in an off-Broadway production of the stage play. The two friends having made a pact years earlier, Douglas says DeVito was “the first person we cast” in what would prove to be an illustrious ensemble including Christopher Lloyd, Brad Dourif and – in the lead roles – Louise Fletcher and Jack Nicholson.

The 1975 movie adaptation of One Flew Over the Cuckoo’s Nest proved a critical and commercial smash that netted five Oscars, including the illustrious Best Picture award which went to Douglas as producer. From this, Douglas went on to both produce and take a leading role in 1979’s The China Syndrome, whilst DeVito was cast in sitcom Taxi, which ran from 1978 to 1983, proving hugely popular and making DeVito a household name. (DeVito’s One Flew Over the Cuckoo’s Nest co-star Christopher Lloyd was also part of Taxi’s ensemble.)

It was in 1984, however, that Douglas and DeVito truly became stars, with their friendship simultaneously immortalised on film, with Romancing the Stone. As well as producing, Douglas took top billing in the romantic comedy adventure as Jack Colton alongside Kathleen Turner as hapless romance novelist Joan Wilder – and for the part of comedic bad guy Ralph, Douglas hired DeVito. It would be the first time they had acted alongside one another on screen. 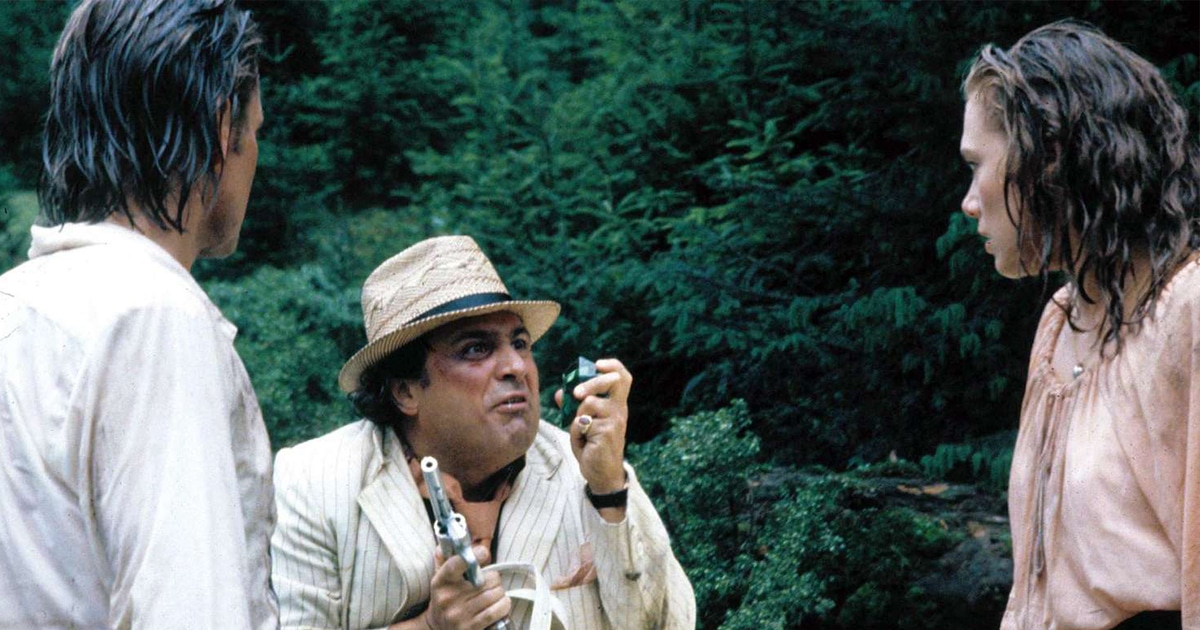 Romancing the Stone has also been the source of an oft-told tale about DeVito saving Douglas’ life whilst they were shooting on location in Mexico. DeVito once told People, “We were in Mexico in this really rugged kind of place. There was this guy who had a truck with a cage on it and inside the pickup truck, in the bed of the truck, were snakes… Michael, he’s being the hot shot, Mikey D… I’m going, ‘Michael, don’t touch the snake! That’s a snake, man. That snake could bite you, man.’”

DeVito says Douglas shrugged off this warning, and sure enough was bitten on the hand. DeVito then stepped in: “I always heard the best thing to do is suck the poison out, right away, so I did. I grabbed his hand and I’m spitting all over the place, and I say, ‘Boy, it’s a good thing this didn’t bite you on the balls, man – you would be a dead man.’”

DeVito has told this story many times since Romancing the Stone was released – and in more recent years, Douglas has called him out on it. Speaking to Seth Myers in 2018, a smiling Douglas grumbled, “I can’t believe that he gets away with this story.” While admitting he was indeed bitten by a snake, Douglas insists DeVito did not suck out the poison; “what he’ll do for a joke, you know… he didn’t do nothing!”

It wasn’t until August 2022 that DeVito finally admitted the truth, whilst taking a lie detector test alongside his daughter Lucy DeVito in a video for Vanity Fair. Asked whether it was true he had once saved Douglas’ life, DeVito told the snake bite story again only for the test to reveal he was lying. Finally, DeVito laughed, “OK, I made that story up. I was lying!” 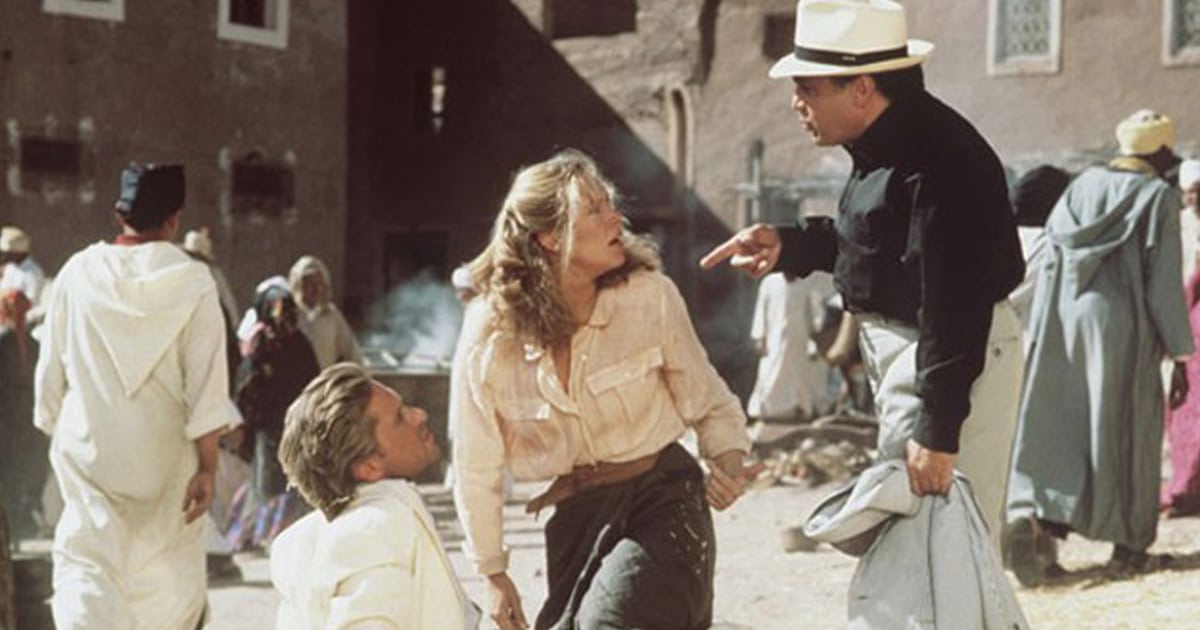 Still, even if DeVito didn’t really save Douglas’ life, his old friend still did him a solid on Romancing the Stone. When the official poster was released, DeVito was surprised to see his name above the title, right alongside those of Douglas and Turner. DeVito admits, “I had no idea this was going to happen. That was a big, big thing.”

As well as launching Douglas, DeVito and Turner to superstardom, Romancing the Stone also cemented the core trio as a unit. They would reunite the following year for 1985 sequel The Jewel of the Nile, but the production was tainted by tragedy when several crew members died in a plane crash. This came on top of the unrelated death of Romancing the Stone screenwriter Diane Thomas, killed in a car accident whilst driving a Porsche which had been a gift from Douglas. Naturally grief-stricken, Douglas says he was “so grateful” having his old friend DeVito around for moral support.

Four years later, the Douglas-Turner-DeVito dream team was brought back together for an entirely unrelated movie, 1989 black comedy The War of the Roses. DeVito had by now moved into directing (enjoying particular success with second film Throw Momma from the Train), and for his third effort he enlisted Douglas and Turner to play a married couple going through a bitter divorce.

The War of the Roses was the last hit movie in which Douglas and DeVito co-starred, but it was not their last collaboration. 1997 saw Douglas produce but not act in John Grisham’s The Rainmaker, in which DeVito took a supporting role; later, they shared the big screen a fourth time in 2009’s Solitary Man, a well-reviewed but commercially unsuccessful drama.

In the interim, the two men have continued to play significant roles in one another’s lives. DeVito is said to have been largely responsible for introducing Douglas to his future wife Catherine Zeta-Jones in 1998, and following the couple’s separation in 2014, reports state DeVito persuaded them to try couple’s therapy. DeVito was returning a favour here, as a few years earlier Douglas had helped reconcile DeVito and his wife Rhea Perlman. Douglas and Zeta-Jones are still together today; sadly, DeVito’s marriage to Perlman ended in 2017.

Since then, Douglas and DeVito joined forces on camera again, when DeVito (now beloved by a new generation for sitcom It’s Always Sunny in Philadelphia, plus Jumanji: The Next Level) made a guest appearance in two episodes of Douglas’ Netflix comedy-drama series The Kominsky Method. Completing the old gang, Kathleen Turner also appeared in several episodes of the show, which ran for three seasons from 2018 to 2021. 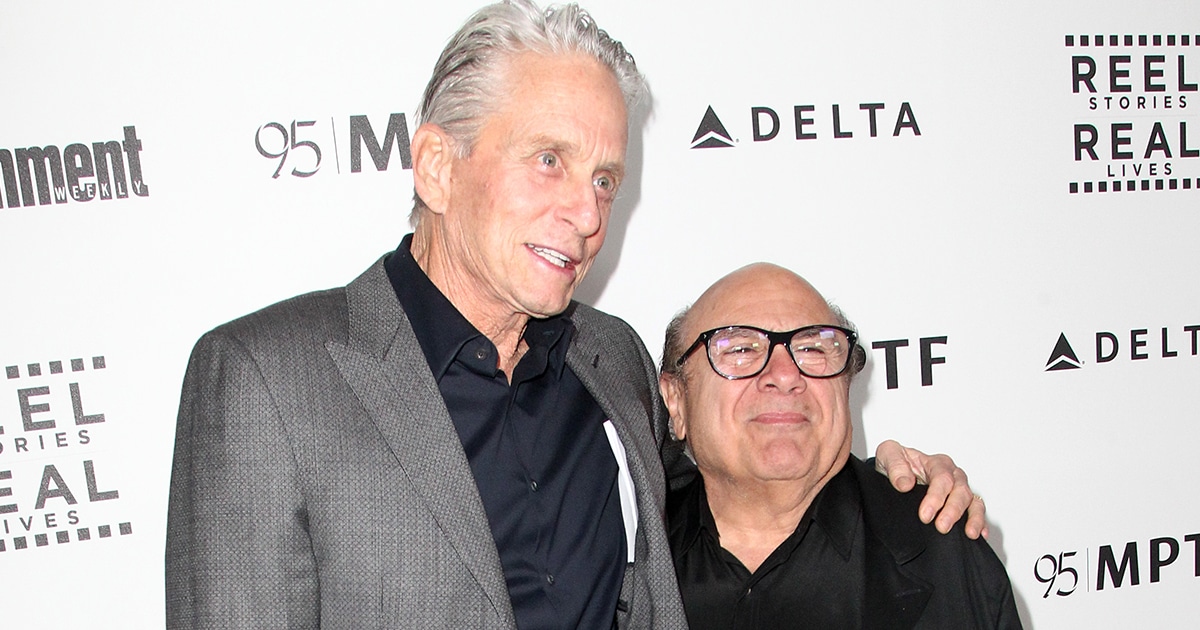 After all these years, Douglas and DeVito remain as close as ever. Regarding their continued collaborations, Douglas remarked in 2019, “I realize now how much more fun it is when you’re working with your friends,” to which DeVito concurred, “It’s about keeping in touch and being with people you care about.”

Even as both screen legends approach octogenarian status, we certainly hope we haven’t seen Douglas and DeVito share the screen for the last time.