Are Anthony Edwards And Miles Teller The Same Person? An Investigation In Pictures

While Anthony Edwards does not appear in Top Gun: Maverick (after all, LtJG Nick ‘Goose’ Bradshaw died in the original 1986 film), it’s hard to shake the feeling that the actor is somehow present in the sequel – not least because of how much Lt Bradley ‘Rooster’ Bradshaw actor Miles Teller looks like his on-screen dad.

Due to the uncanny resemblance between Rooster and Goose, many have wondered whether Miles Teller and Anthony Edwards are indeed related, with some even asking if Teller is Edwards’ son. The answer is no – but it’s not hard to see why people might mistake the two actors for family. 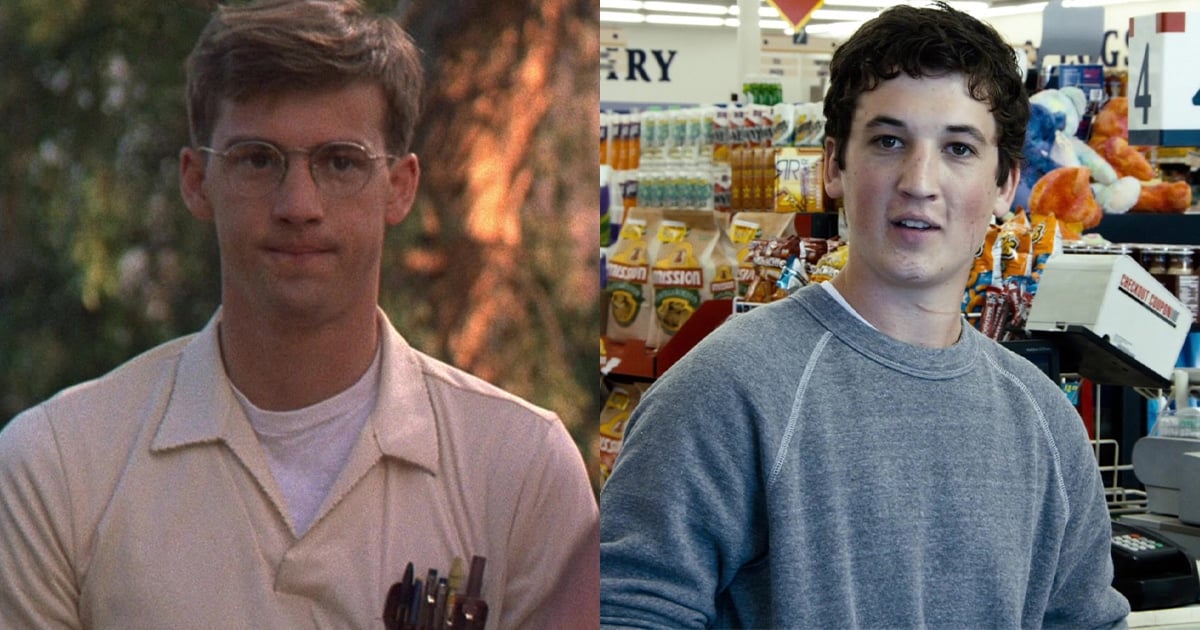 Anthony Edwards was born July 19, 1962, whilst Miles Teller arrived almost 25 years later on February 20, 1987, almost a year after Top Gun came out (even though the future Rooster, little Bradley Bradshaw, is already a toddler in the original 1986 film).

Both Edwards and Teller found breakthrough roles in raucous teen comedies, Edwards in 1984’s Revenge of the Nerds, Teller in 2012’s Project X. There’s some common ground here, then – but no one was necessarily conscious of a physical similarity between Edwards and Teller before Top Gun: Maverick.

However, the moment Teller first appears in Maverick with a moustache, tanned skin, aviator sunglasses and an unbuttoned Hawaiian shirt, you could almost swear Goose himself just entered the room. (It obviously helps that Teller’s Rooster proceeds to sit down at a piano and play Goose’s standard, Great Balls of Fire.) 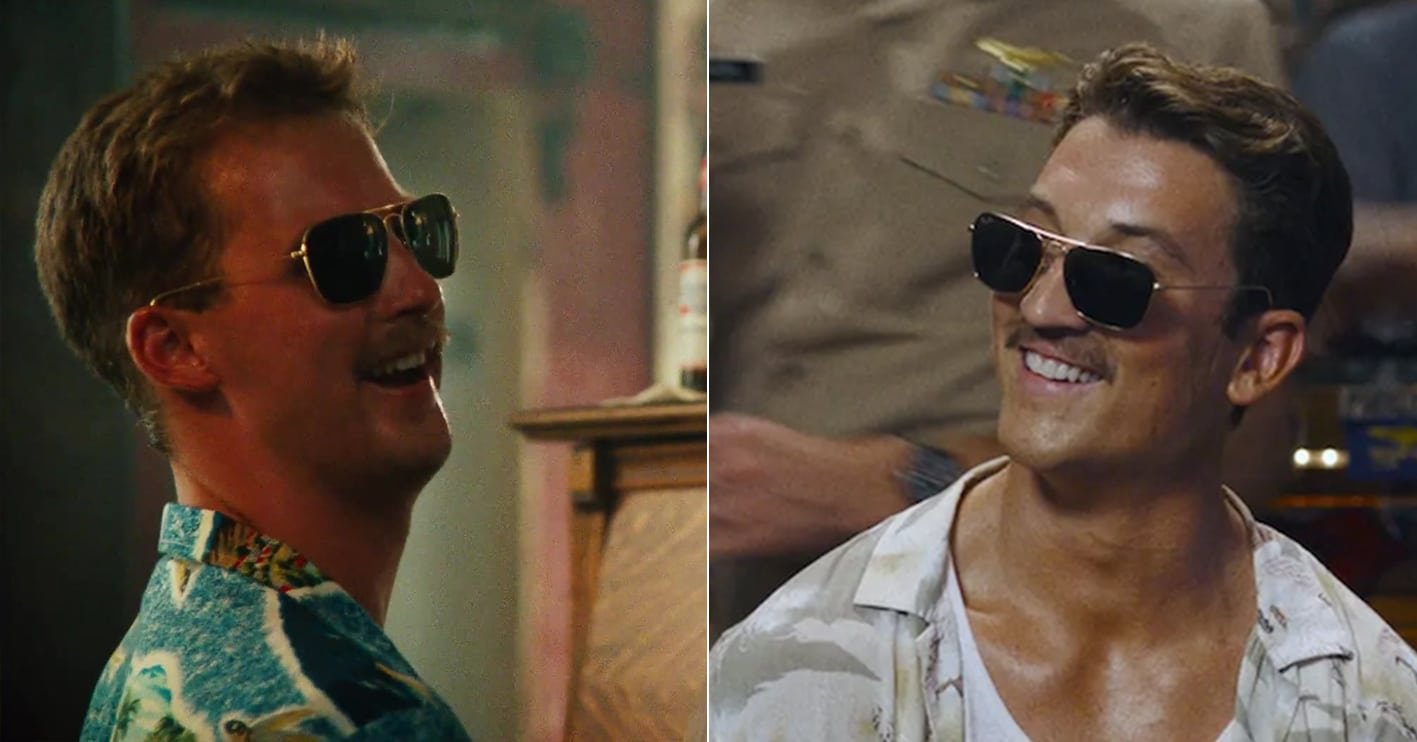 This obviously wasn’t lost on the cast and crew of Top Gun: Maverick. Director Joseph Kosinski, who had previously directed Teller in Only the Brave, was the first to see it, telling Indiewire in 2022: “I felt like he embodied a lot of the qualities that Anthony Edwards showed in the first film”.

Kosinski had a novel approach to getting producer and leading man Cruise to envisage Teller in the role. First, Kosinski says he “showed Tom a picture of Miles… [on which] I’d Photoshopped a mustache on him.” Then, the director had Teller perform Great Balls of Fire: “After that test, it was clear to all of us that Miles had the range to pull off everything this character needed to do.”

The resemblance was of course even more obvious once Teller was in costume, as Teller recalls: “The first time [Tom Cruise] saw me in full hair and make-up, I had my flight suit on… he just said, ‘oh my God. You look so much like Meg [Ryan, Goose’s wife in Top Gun] and Anthony [Edwards]’s kid, you could 100% be his kid.” 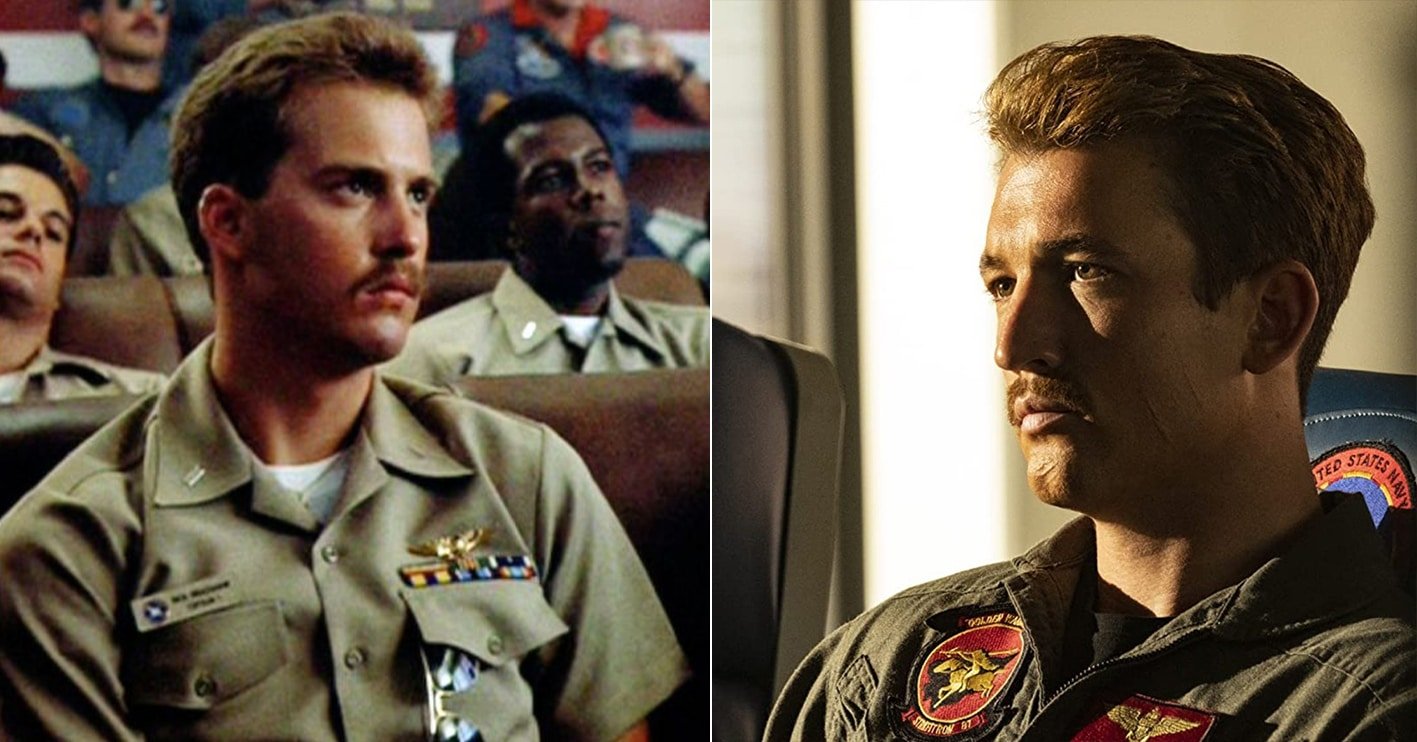 Edwards and Teller are close in height. Where Edwards stands 6’2″, Teller is only marginally shorter at just over 6′. This means both actors tower over the considerably shorter Tom Cruise, who stands at just under 5’8″.

Though Anthony Edwards only appears in Top Gun: Maverick in brief flashback footage and photographs from the 1986 film, his shadow hangs heavily over the 2022 sequel. The character of Goose is directly discussed in multiple scenes, and both Cruise’s Maverick and Teller’s Rooster are shown to still struggle with his loss. 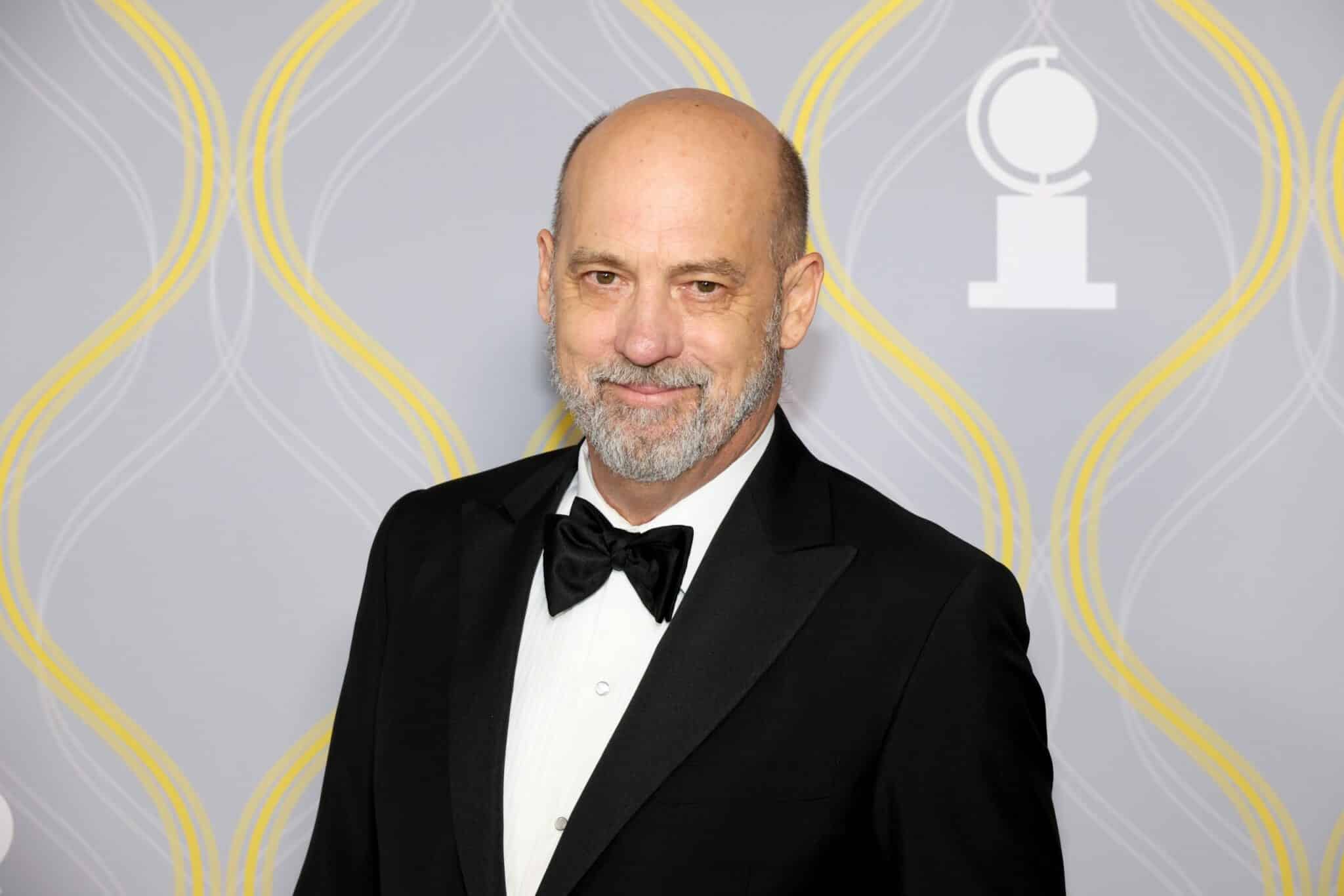 Edwards himself has joked of Top Gun: Maverick, “It’s the biggest movie that I’m in that I never had to show up for a day of work, so it was fun.”

The Goose actor also gave the sequel his seal of approval; Cruise screened the Top Gun: Maverick especially for Edwards prior to release, and Edwards told Cruise, “Mission accomplished… it had the feel, it had the tone [of the original], it had what people wanted.”

All the more remarkably, Teller (who had some input into the choice of ‘Rooster’ as his call sign, arguing “it was in the same family as goose”) evoked Edwards without having met him. 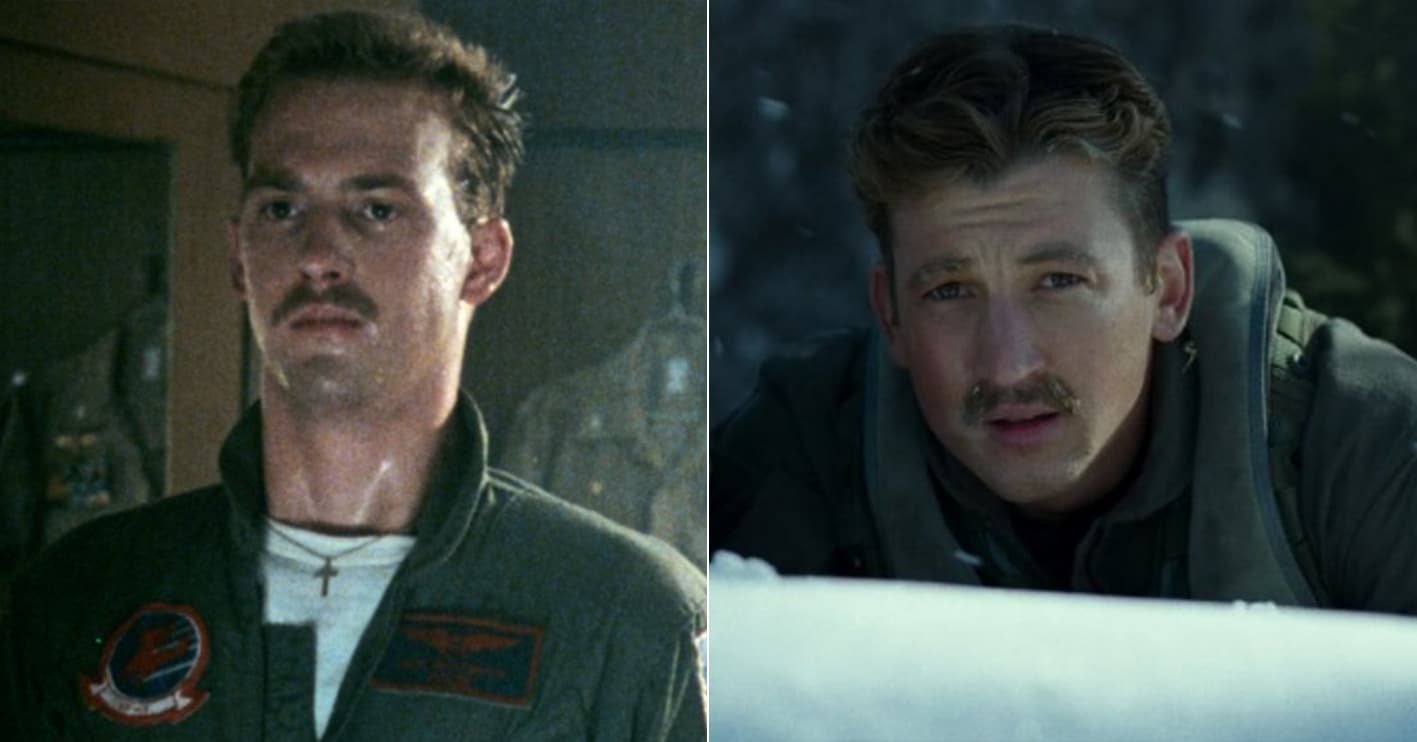 The younger actor says he “didn’t get the chance to meet Anthony beforehand – it would have been great,” and hopes that at some point the two of them can “sit down and have a bite, and talk about our experience making Top Gun.”

Whether such a meeting has yet occurred, we don’t know – but Teller has hinted at the possibility of returning as Rooster for another movie. As Top Gun: Maverick’s box office takings have soared past $1 billion, the odds of us having to wait another 35 years for a third Top Gun seem slim.

As for that Rooster moustache? Teller’s wife made him shave it off “immediately” after filming on Maverick ended.