Plenty of famous performers have walked down the aisle enough times to have memorised the exact right pace at which to walk, from Zsa Zsa Gabor to Jennifer O’Neill to Mickey Rooney. However, no one has built a brand around multiple marriages more successfully than Joan Collins.

A British star of the big and small screens, Collins first broke through in the 1950s, and ever since her constant nuptials have been made fun of on late-night talk shows and The Simpsons alike. Here are all of her marriages (plus a prominent attachment that didn’t end in a ring!) from beginning to end: 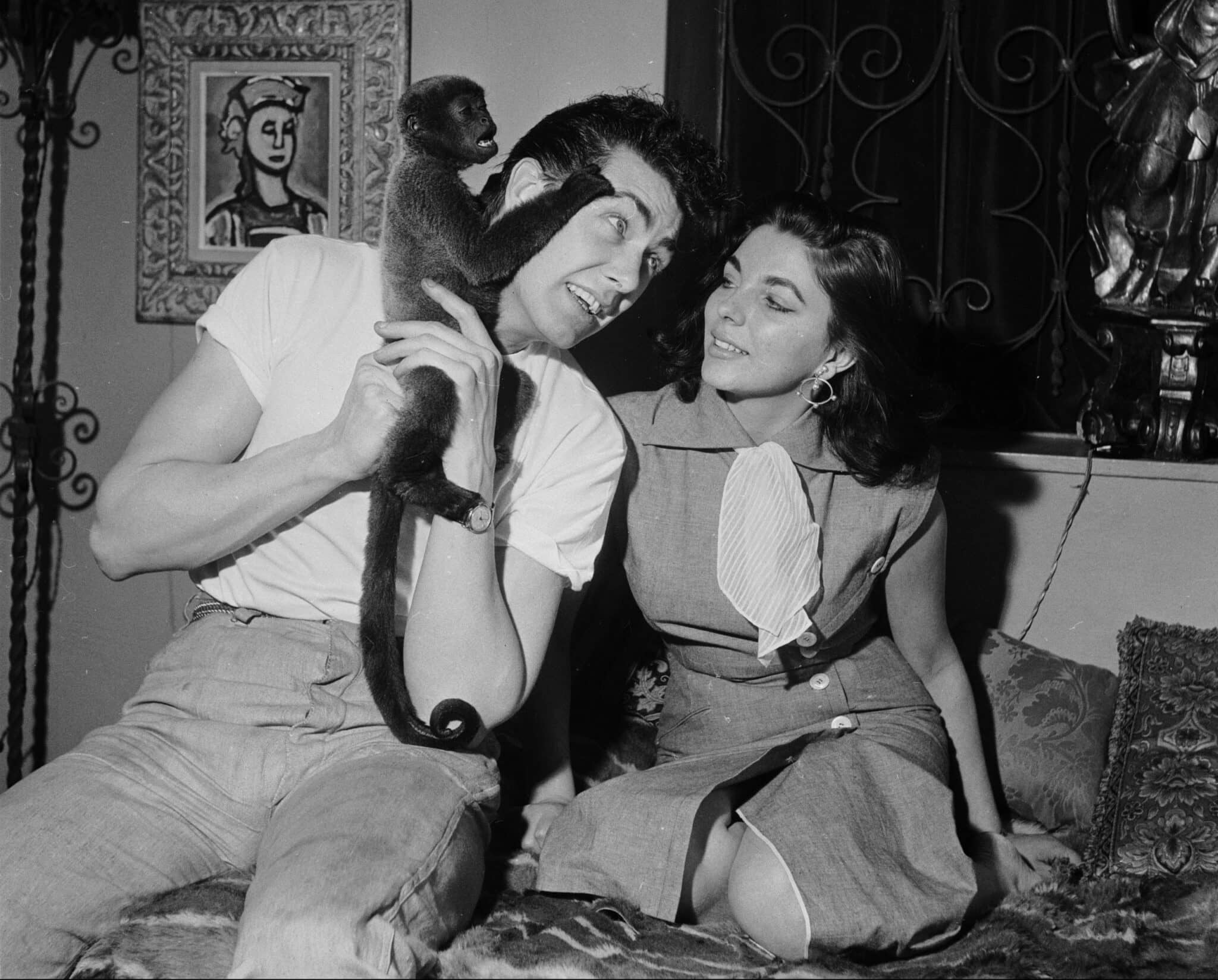 Joan Collins’ first marriage came in 1952, to Northern Irish actor Maxwell Reed. Reed was a pilot in the RAF and a member of the Merchant Navy during World War 2, but rose to prominence as a performer during peacetime. He joined the so-called Rank Charm School at the age of 27, and made his film debut in 1946, in the British production The Years Between.

Though Reed was a bona fide leading man and rising star in his own right when he met Collins in the early 1950s, their marriage was not a happy one. It is alleged that Reed sexually assaulted Collins, and that she married him out of shame and obligation. The two separated just two years after their wedding and divorced two years later in 1956, with Reed unsuccessfully suing Collins for alimony. 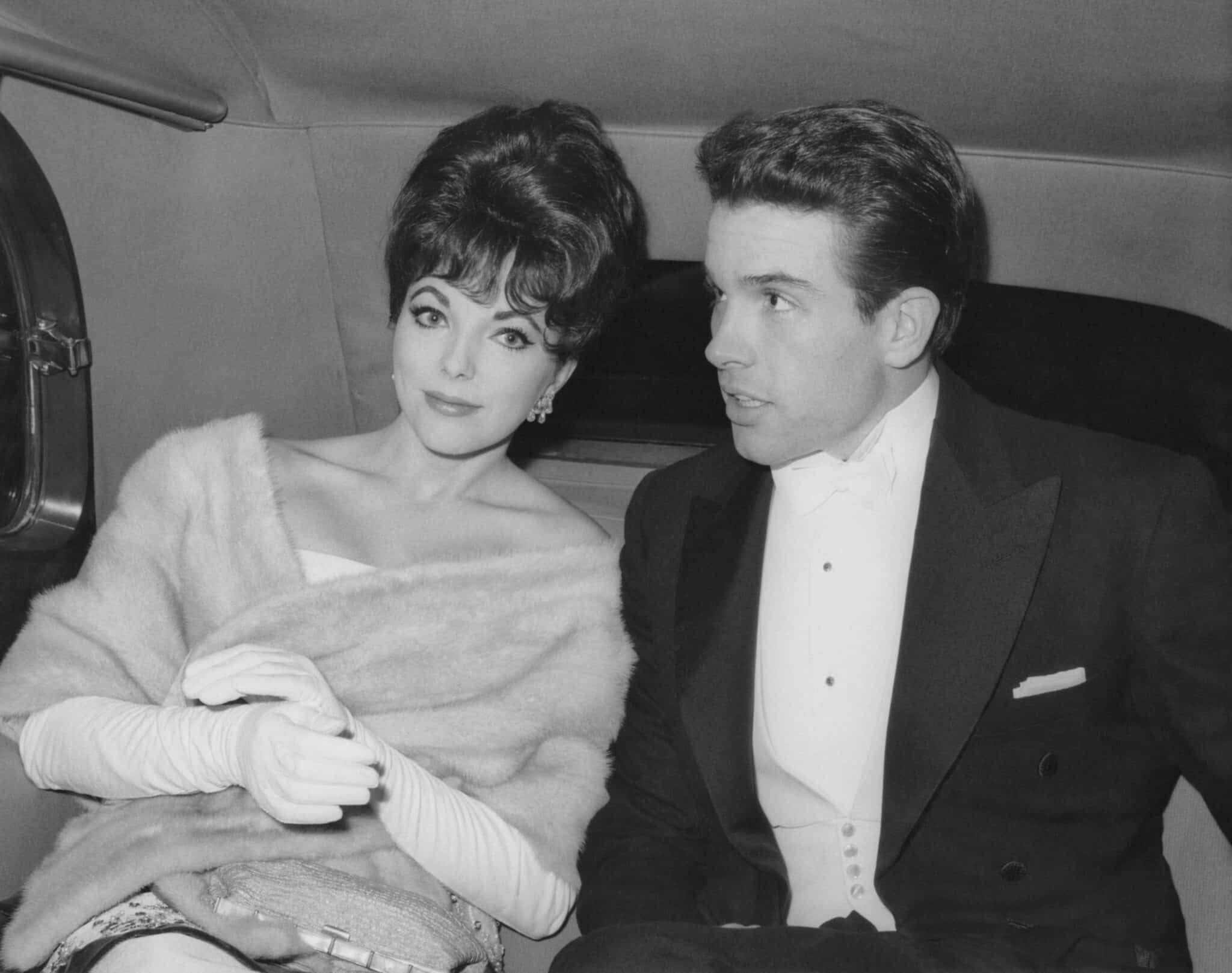 In the late 1950s, Joan Collins formed a public attachment with then-unknown actor Warren Beatty. Beatty began his career with television appearances on shows like Studio One and Kraft Television Theatre, before becoming a series regular on The Many Loves of Dobie Gillis. It was around this time that Beatty met Collins, who was already an established film star with legions of fans.

Collins and Beatty were immediately smitten with each other, and the relationship progressed quickly, with Beatty proposing in 1960. However, the relationship burned out just as fast and ferociously as it began, with the pair breaking up in the same year. The reason for the split was Beatty’s Lothario tendencies, as the actor allegedly cheated on Collins multiple times as he gained prominence and momentum in his career. 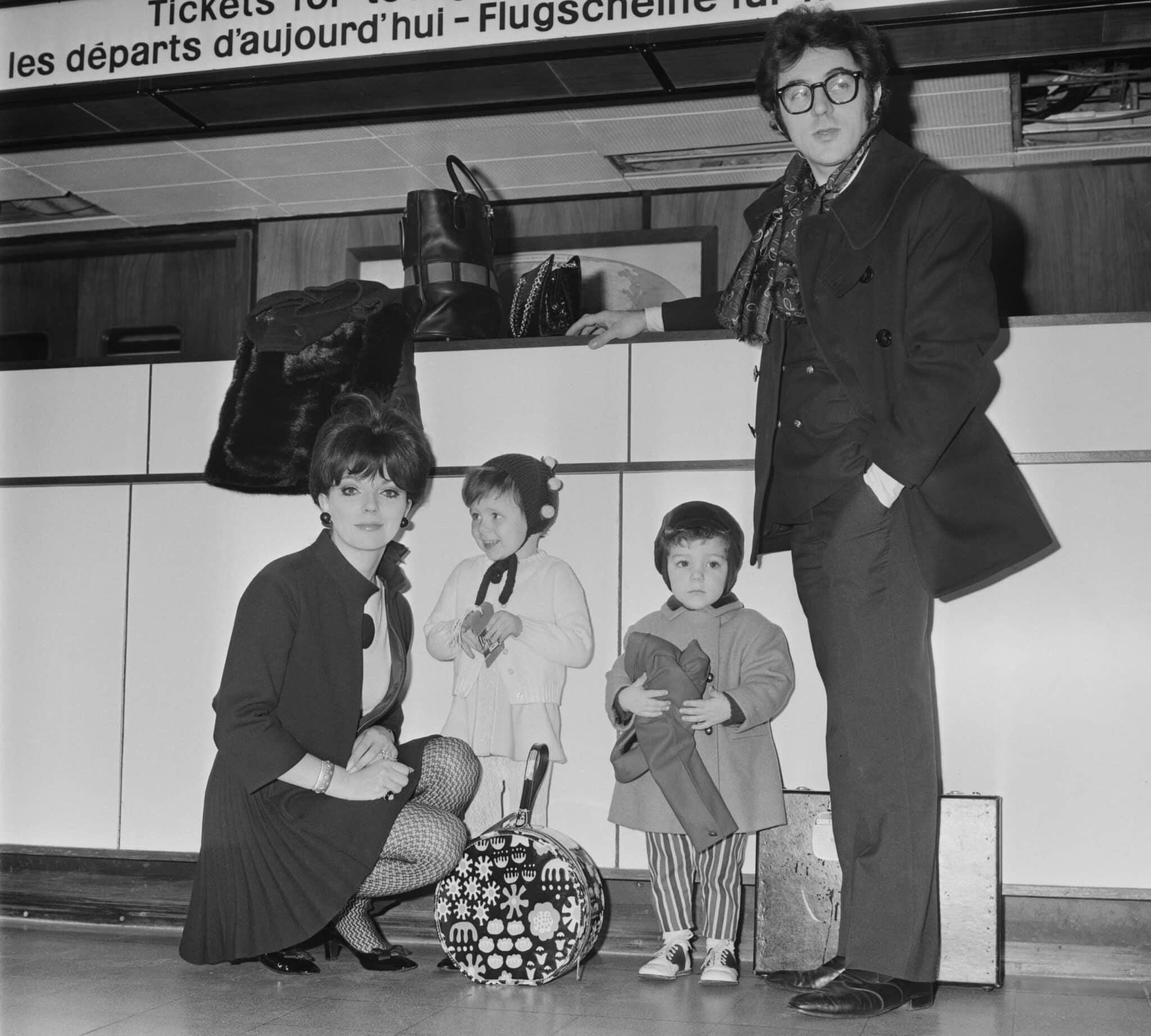 When Joan Collins got married for the second time, it was to 60s Renaissance person Anthony Newley. Newley is best known for writing the legendary jazz classic Feelin Good, which was most famously performed by Nina Simone, as well as the lyrics for the title track of Goldfinger. Newley had been married just once before meeting Joan Collins, to British actress Ann Lynn, with whom he had a son.

Joan Collins and Anthony Newley tied the knot in 1963, and their marriage lasted all the way until 1970. However, Newley fell in love with Dareth Rich and married her in 1971, almost immediately following his divorce from Collins. Collins left her second marriage with a daughter and son, who are now both working in artistic fields themselves. 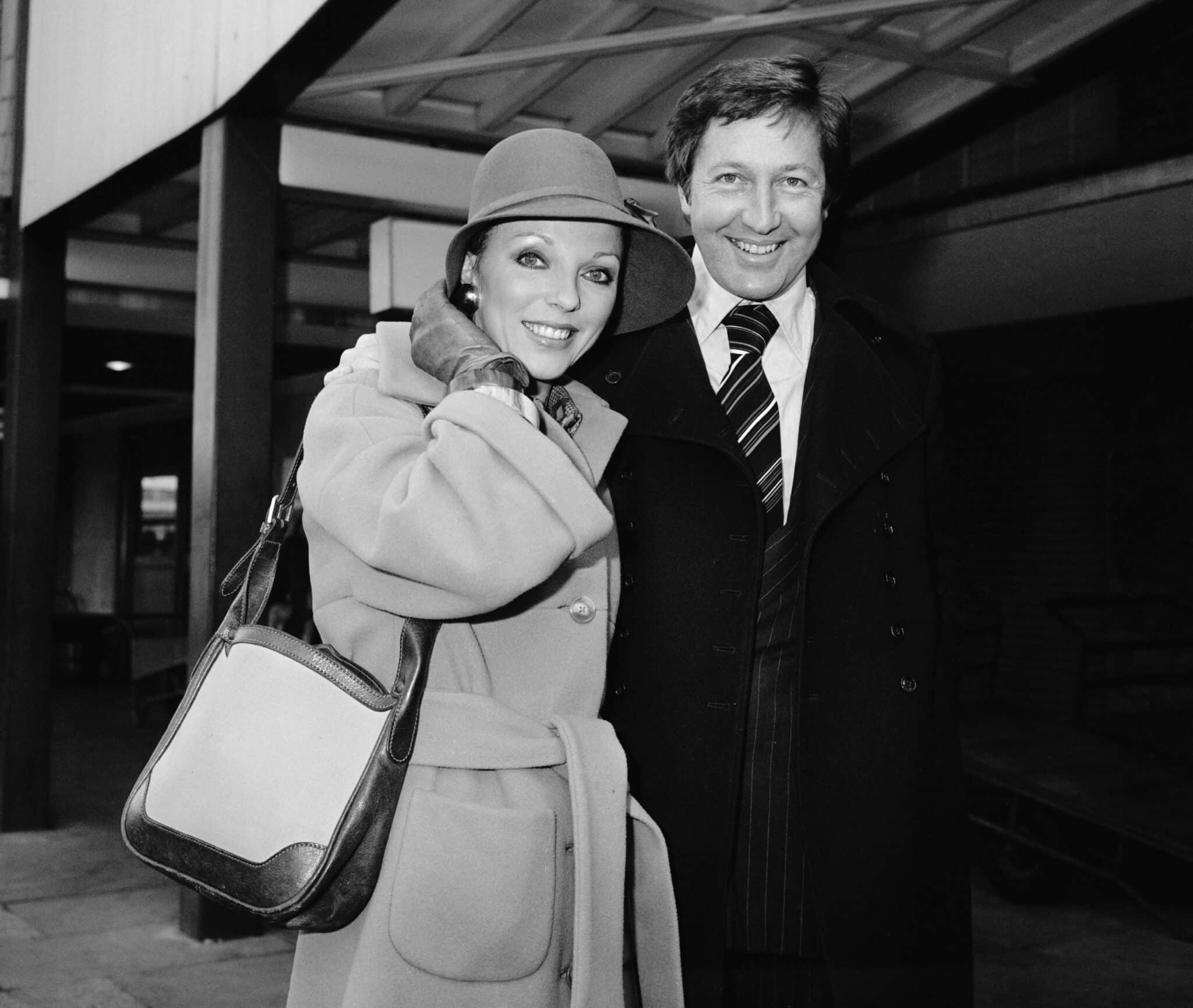 When Joan Collins went on the hunt for a third husband, she broke her established pattern by looking outside of the performers that made up her usual dating pool. Instead, she married Ron Kass, a highly successful American businessman. However, the marriage was not entirely divorced from the entertainment world, as Kass was a recording executive, film producer and, most famously, manager of The Beatles.

Before marrying Collins, Kass had three children with his first wife, and the four of them moved from London to Lugano, Switzerland. After the divorce, Kass moved to the US while his family stayed behind, which put him in the position to meet Joan Collins. He and Collins tied the knot in 1972, and Collins gave birth to his daughter in the same year, sparking rumours that the wedding was intended to prevent a baby out of wedlock. Kass and Collins’ relationship lasted for over a decade, but ended in divorce in 1983. 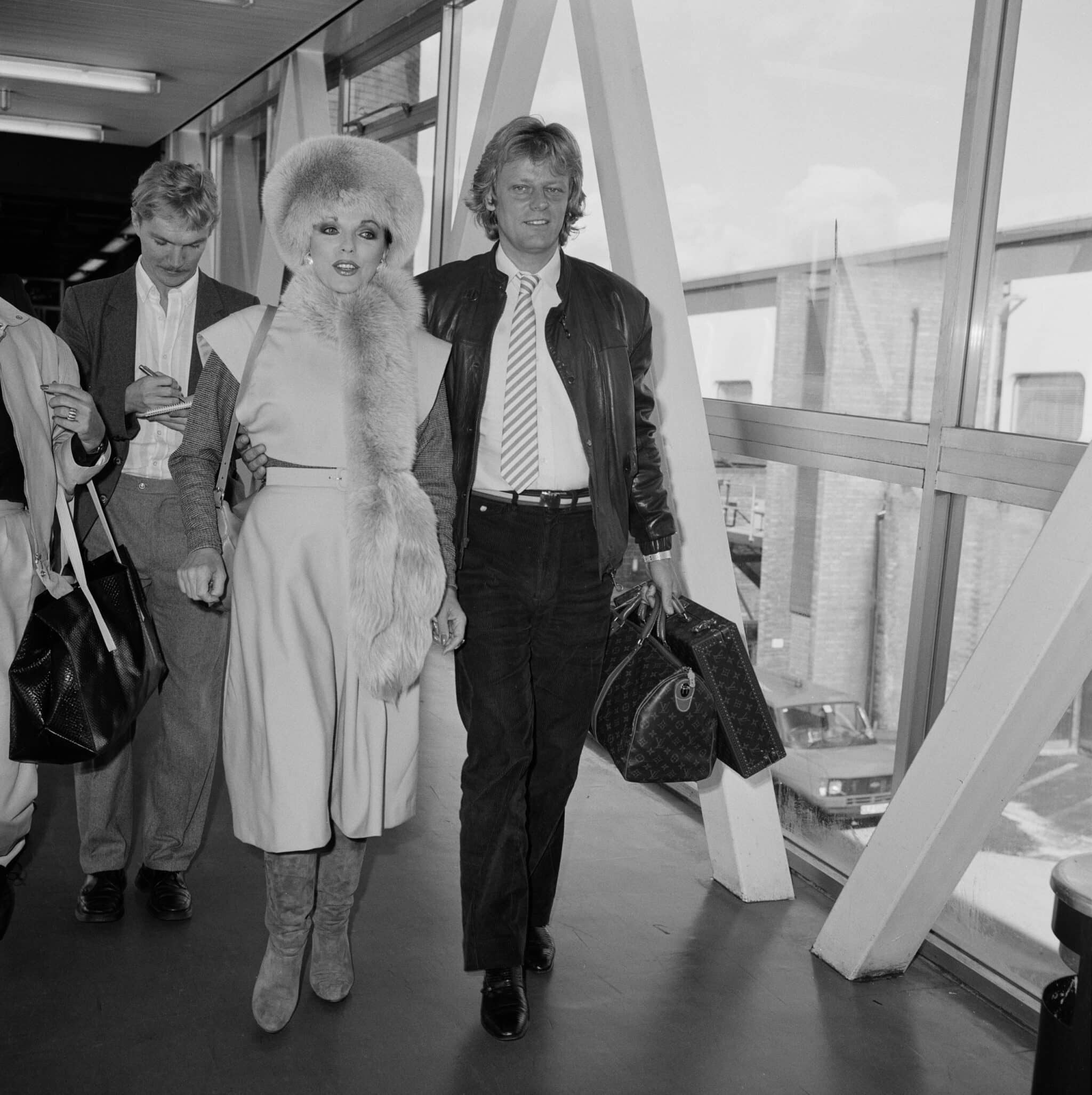 Joan Collins entered the mid-80s with three prior husbands and three children. Following her separation from Ron Kass, she remained unattached for two years, before marrying Peter Holm in 1985. Holm was a famous Swedish playboy and former Europop singer, who spent decades in the headlines for his flamboyant lifestyle and string of romances.

To say Holm’s relationship with Collins was tempestuous would be an understatement. Collins sought an annulment just a year after their marriage in 1986, and the divorce was finalised in 1987. Famously, their divorce proceedings turned into a media circus, with Holm issuing a restraining order against Collins, and Collins stating in return that Holm was: “the most combative person [she’d] ever met”. During the trial, Collins’ lawyer produced Holm’s secret lover up-and-coming starlet Romina Danielson, who was grilled so intensely during questioning that she fainted on the stand. Yikes. 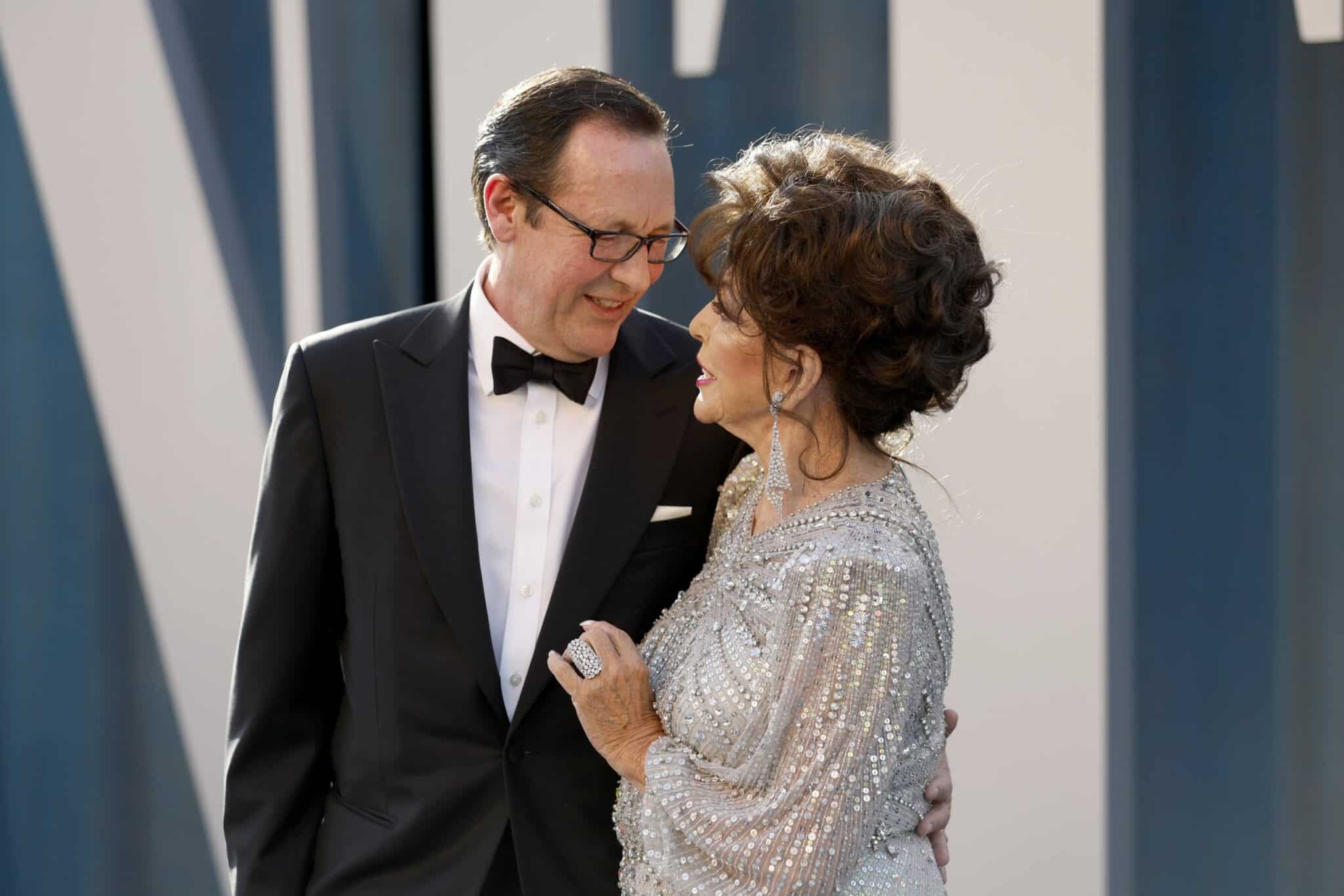 The gap between Joan Collins’ fourth and fifth marriages was the largest of her life, with her divorce from Holm being finalised in 1987, and her marriage to Percy Gibson occurring in 2002. Gibson is 31 years her junior and has lived his life predominantly away from the spotlight, though his career is also inextricably tied up in showbusiness.

Percy Gibson is a Hollywood producer best known for his work on films like The Time of Our Lives, Banksy’s Coming to Dinner, and the TV show Who Wants to be a Millionaire. Though he was born in Peru, in adulthood he became a US citizen. Speaking in an interview with The Sun, Joan Collins said of her final match: “The fact that I was older didn’t matter to us. It was giddy, it was fantastic and Percy and I fell madly in love. I’ve finally found my true soulmate. And my husband forever.” How sweet!