15 Vintage Photos of 80s Malls To Make You Feel Nostalgic

In the 1980s, as communist USSR crumbled and the capitalist West found itself crowned victorious after a decades-long cold war to prove one mode of life was more bodacious than the other, the shopping mall emerged as a cathedral to consumerism. 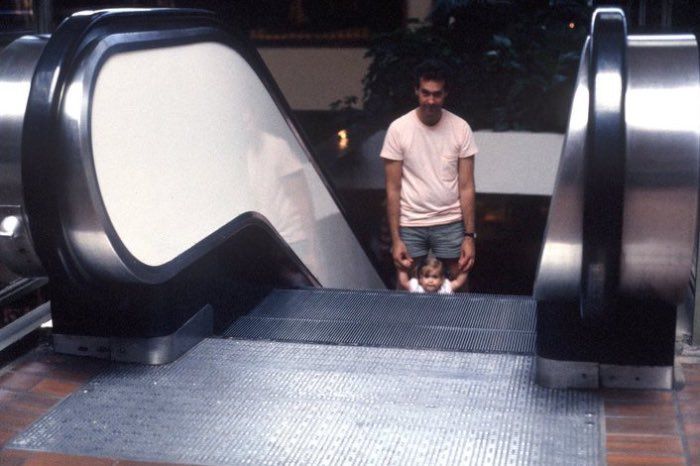 Malls in the 80s were bustling mini-metropolises. A none-more-American invention, malls were weekend haunts for families and hangout spots for teens. Built to cater to everyone’s needs all at once, malls were – in a time before Amazon and online supermarket shopping – the go-to place for discerning denizens of the 80s. 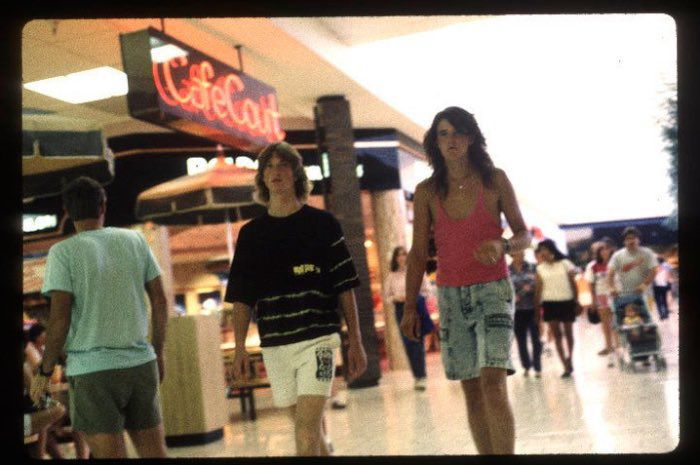 Feeling nostalgic for that bygone age? We’ve got you covered: here are 15 photos from a time when the mall reigned supreme. 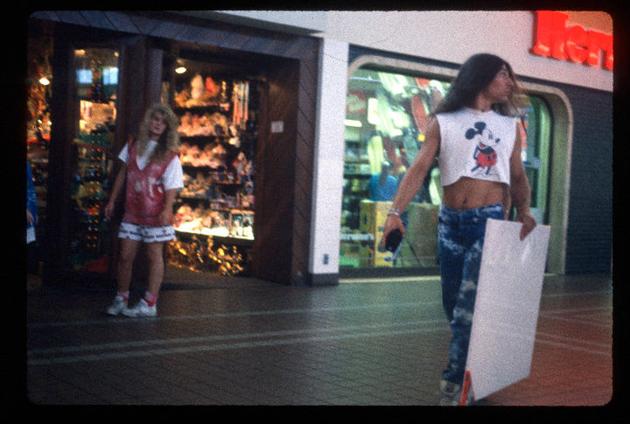 This isn’t a sight you’d likely see today: A long-haired man, wearing a Mickey Mouse crop top and stonewashed jeans combo, walking through the mall like he’s on a catwalk as a woman with hair like Louis XIV looks on. 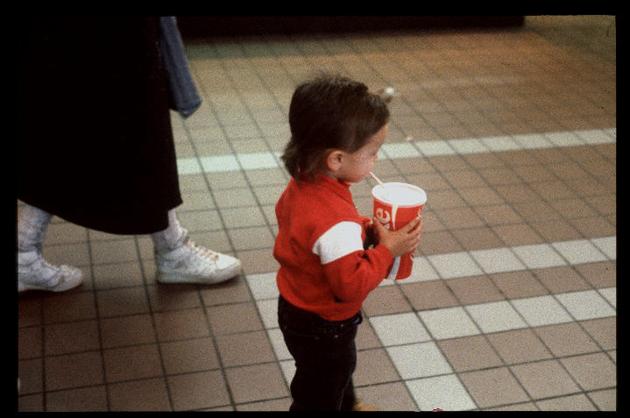 This kid will be in his mid-30s now, but what actual chance is there that he has ever been cooler than at this very moment, strolling around a shopping centre while sporting a mullet and drinking a coke bigger than his own head? 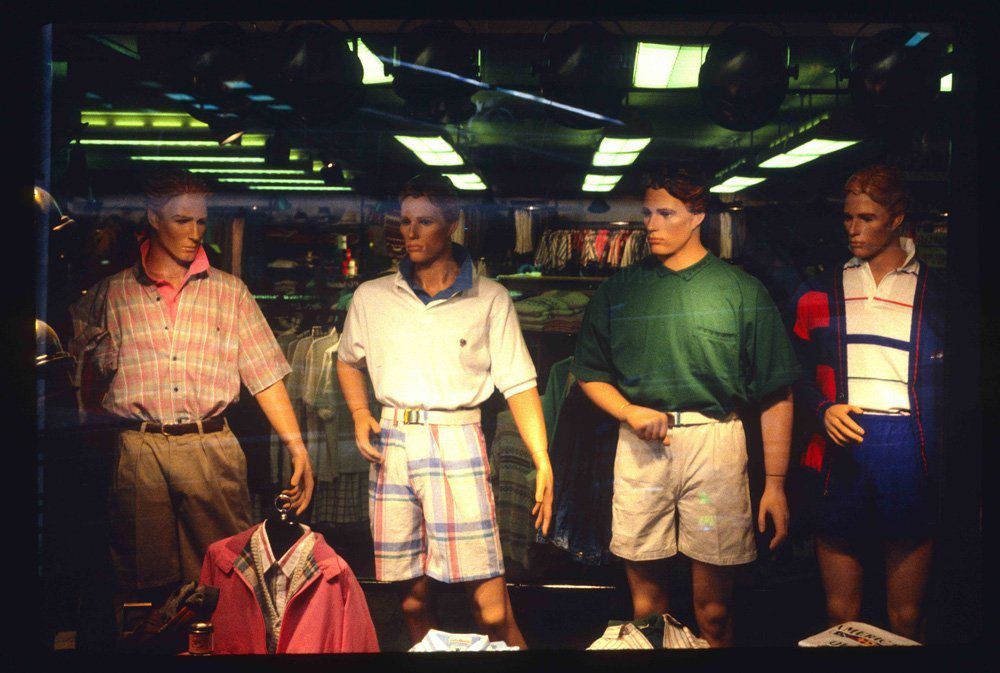 Here’s a look at the male American ideal, circa 1989. As you can see, that year the ‘polo shirt with high-waisted belted shorts’ look was in, while Tom Cruise-in-Rain Man hair was as sharp as hairstyles got. 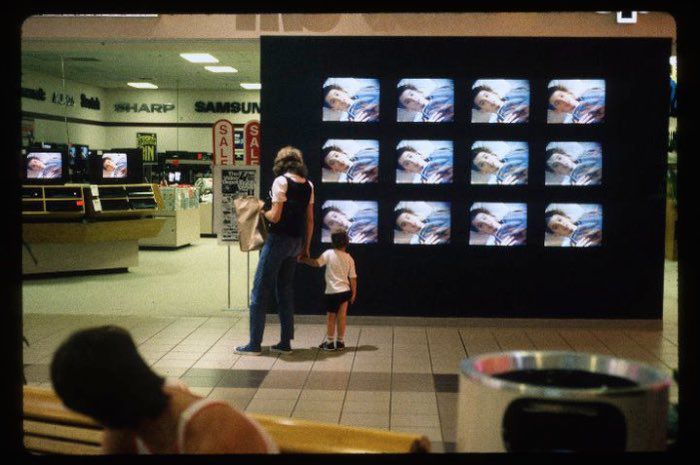 That transfixed kid has no idea how basic that TV is going to look in 30 years. Also: is there a more 80s image than multiple electronics store TVs stacked symmetrically on top of one another, all blinking their images in tandem? 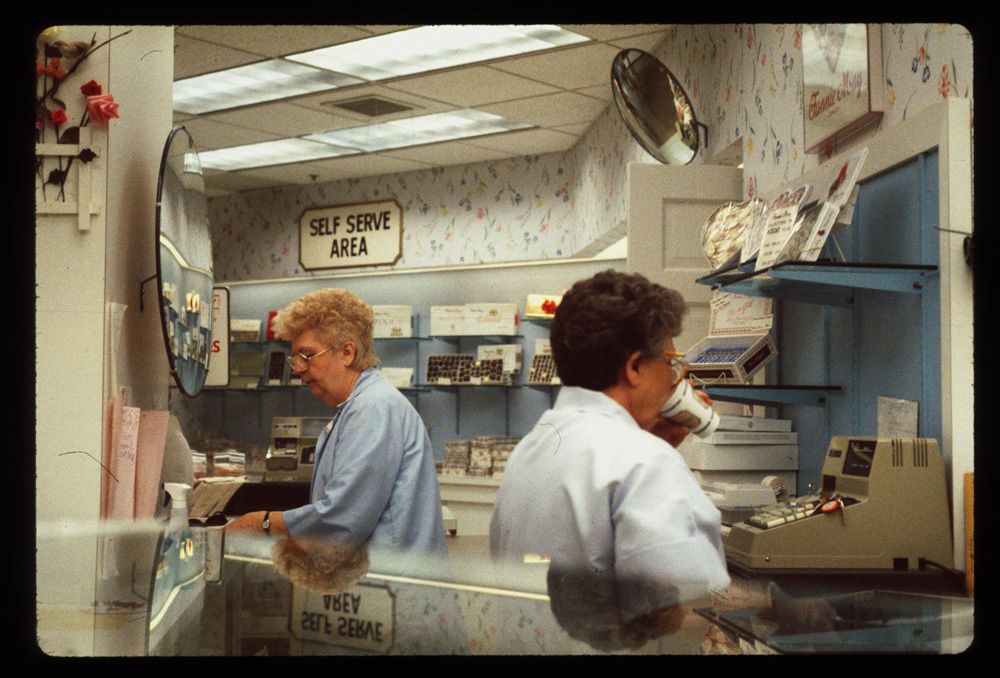 Self-service has come a long way since the age of shoulderpads and New Coke. 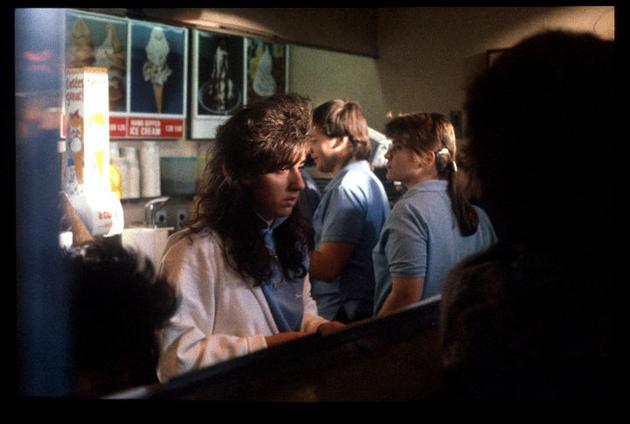 In the 80s, the hairstyles sometimes looked like the food you were buying. Here we see a young woman hitting up the mall ice cream parlour, delicious-looking pictures of sundaes marking the wall behind her. Perhaps it’s her inability to make a decision that’s left her looking so pained. 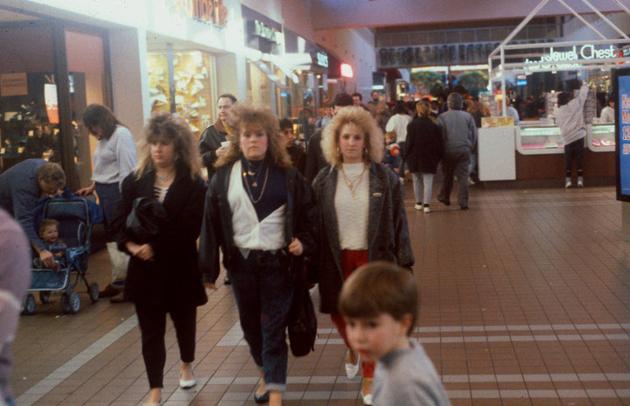 Heading to see The Breakfast Club for the eighth time no doubt, three female friends – whose hair maintenance must have collectively contributed to a third of America’s carbon emissions that year – leisurely take in the sights. 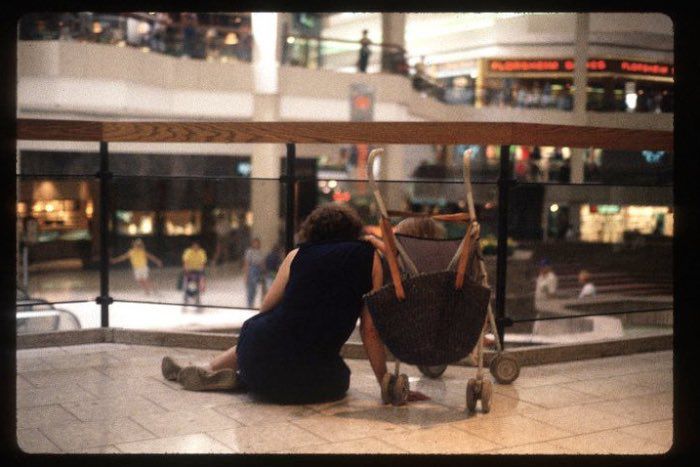 Parenting was still exhausting in the 80s. A woman and her child take a break from an undoubtedly exhausting day of looking at things and buying things, as on the ground floor before her another young woman appears to be skating, or perhaps doing that impossible Michael Jackson lean thing. 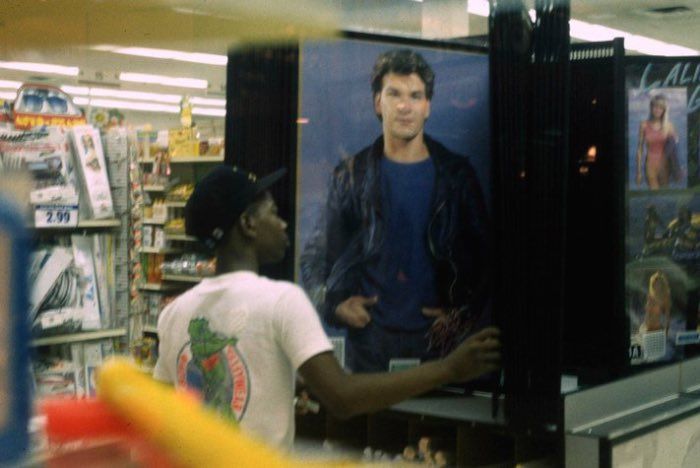 Patrick Swayze, one of the biggest stars of the era, stares charmingly, and handsomely, from a poster. The kid doing the scrolling may just be making his way to the Baywatch one-sheets visible on the right of the image. 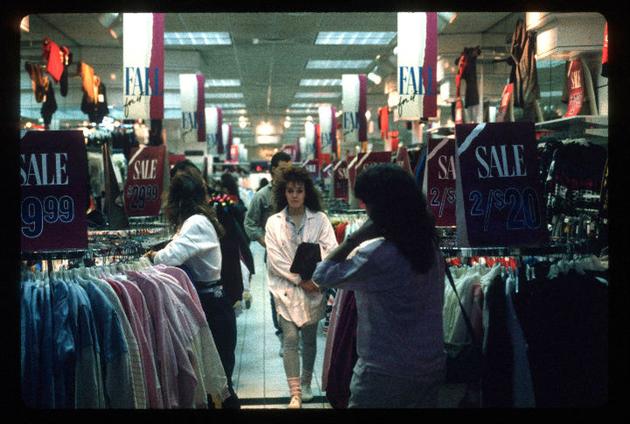 They packed the product tight into the stores in this era. A sale is on, so the woman walking through the middle of the image appears to be wisely clutching her chosen item close to the chest, lest any fellow bargain seekers should try to snatch it. 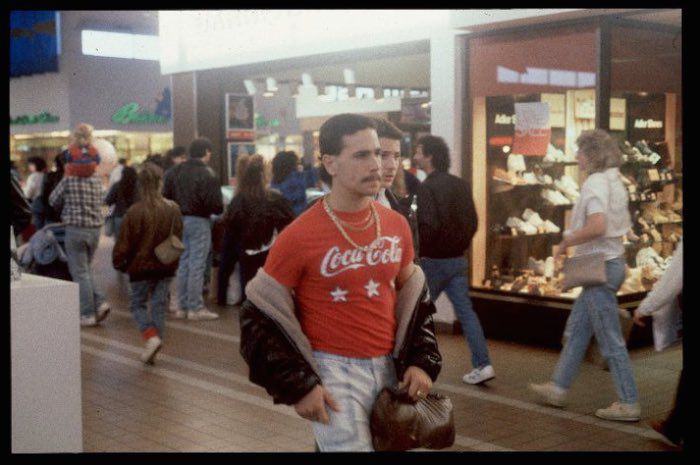 This guy is leaving nothing to chance. To avoid anybody mistaking him for anything but a red-blooded, all-American man of the 80s, he’s gone for the Springsteen look: short-cropped do, gold chains, stonewashed jeans and a t-shirt bearing stars and the Coca-Cola logo. 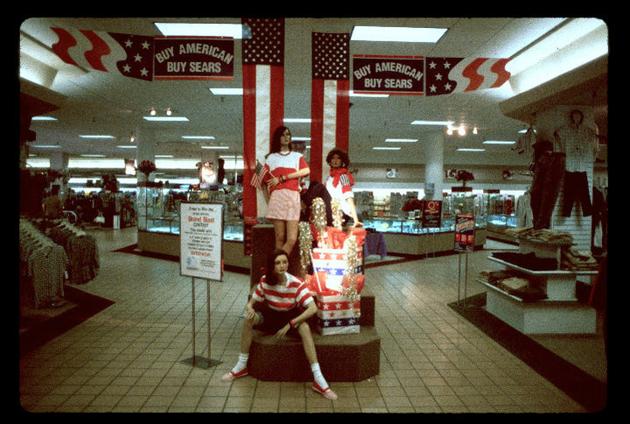 Did the Reagan administration design this display? 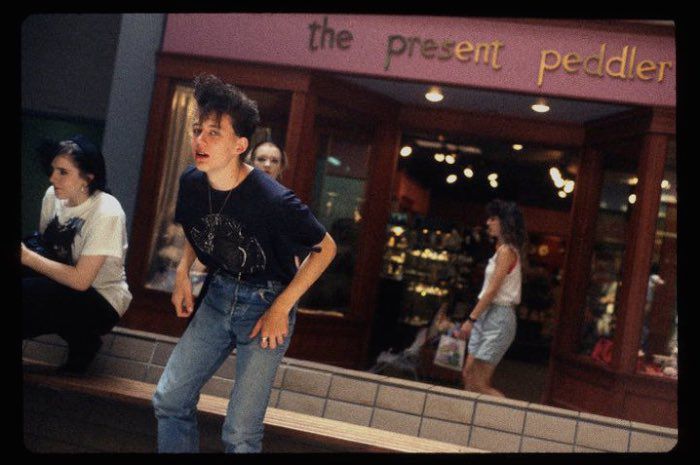 Something about the young man in this photo suggests he wasn’t majorly keen on having his picture taken. At a guess, his favourite bands are The Cure and My Bloody Valentine. 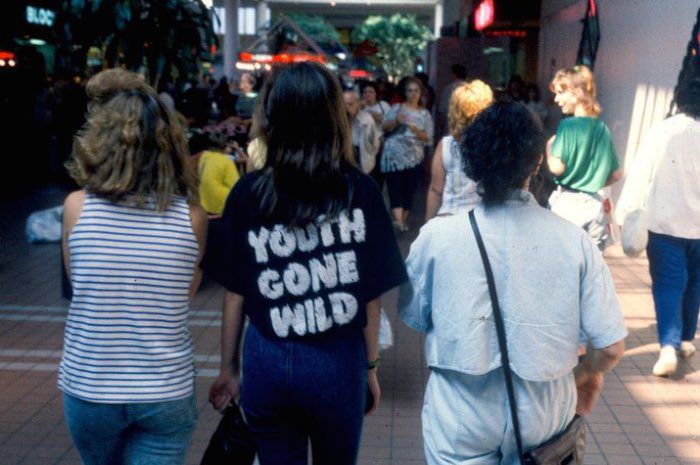 The suburban American youth didn’t so much ‘go wild’ in the 80s as make their way to the mall to buy faux-rebellious clothing, dine at the food court and frequent the multiplex. These three seem nonplussed by the onslaught of shoppers coming their way, no doubt already familiar with deadly mall crowds. 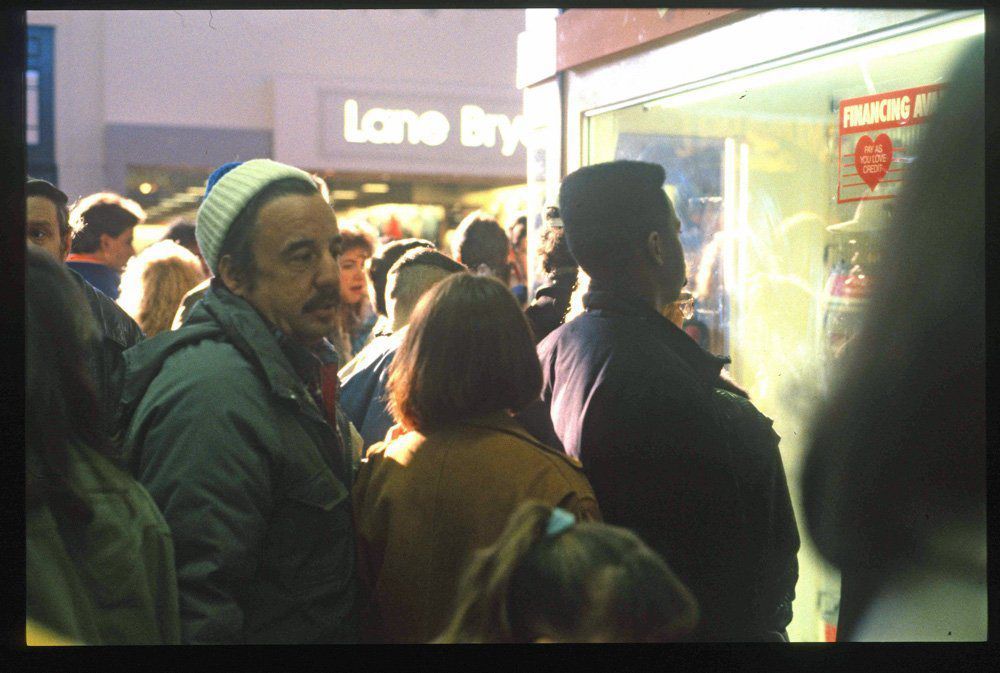 Here we see the mall in all its true glory: packed out with American shoppers looking to spend, spend, spend. Take that, Russia.