10 Things You Didn’t Know About WHAM!

WHAM! were not only every teenage girl’s pin-ups during my own 1980s childhood, but also the name given to a bar which tasted quite like nothing else you’ve ever tasted.

Once described as ‘a space-age adventure of pink, sticky, chewy bar, laced with tongue-fizzing green pieces.’ But at 10p a pop, you couldn’t really complain. 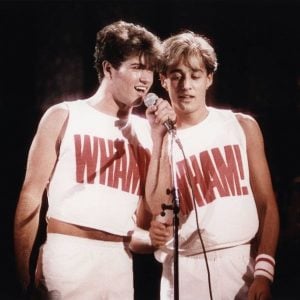 I do bear a slight grudge towards George Michael and Andrew Ridgeley’s 1980s pop outfit mind, based purely on that pointless exclamation mark on the end.

Which makes it virtually impossible to continue a sentence without predictive text assuming you’re starting a new one; and like Bob Holness himself was often caught doing back in the day, giving us a (capital) letter. 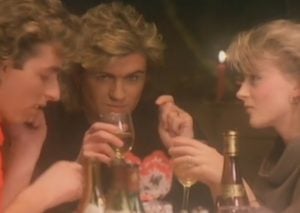 But back to Wham! and their ill-fitting white tennis shorts, Christmases spent in remote log cabins with Pepsi and Shirley for company and cocktail-sipping around pools. Seriously, it’s surprising just how much fun and frolics could be had when you’re holed up with the 1980s go-to backing singers, judging by the video to ‘Last Christmas’. Which, in my opinion, is THE best Christmas record, bar none. 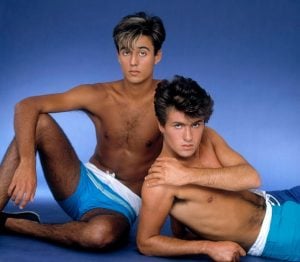 Despite badly scripted snowball fights, pseudo-surprised faces when opening presents on Christmas morning, pulling crackers, sitting on a fake fur rug in front of a roaring fire and wearing the sort of seasonal knitwear even Val Doonican would have refused to pull on.

Beneath I discover 10 things that you didn’t know about Wham! All of which are based in fact and not the realms of fantasy or as a result of my over-active imagination. That said, Wham! and ‘Careless Wispa’. Is it me or did George and Andrew have some sort of confectionary fixation??

Like it or not, ‘Last Christmas’ certainly stands the test of time, year in, year out. Just walk around any retail establishment during December and you’ll be met with a (sound) wall of ‘Last Christmas’ on perpetual tape loop.

Great news for Christmas shoppers with an undiminished penchant for George and Andrew, not so good news for store staff who have to stave off emotional meltdowns on an annual basis. According to the music industry, at last count there have been 400+ cover versions of the track released since 1984’s original.

From ‘Wake Me Up Before You Go-Go, Club Tropicana’ and ‘I’m Your Man’, through to ‘Wham! Rap, Young Guns, Freedom’ and ‘Careless Whisper’, between 1982 and 1986 Wham!’s Top 40 clout and broader presence in the public conscious was without parallels. 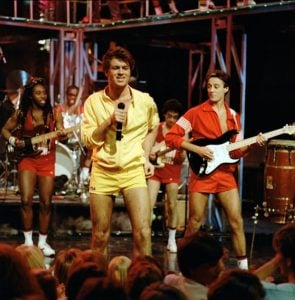 And with success comes untold riches, if not for them (as George would bitterly point out in his later autobiography), then for their then record company. With a staggering 25 million plus certified records sold globally, you do the math.

Wham! were early pioneers of the all-empowering slogan T-shirt. Along with ‘Frankie Goes to Hollywood’ (who if you call chose to encourage relaxing), George and Andrew were equally vocal about choosing life. And getting Pepsi and Shirley to sing backing vocals a lot. 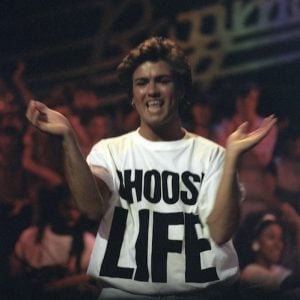 Funny how all these decades later, this last summer has seen a resurgence of people wearing Persil-white tees out and about; paying homage to Wham’s instrumental role in the whole slogan tee movement of the ‘80s.

7. Ridge Ire. Not to be Confused with Midge Ure

Modest to the letter, Andrew Ridgeley once acknowledged that his – and I quote – “natural good looks” were all down to his DNA. Which, for the record, included Italian and Egyptian ancestry, together with his English roots. Hence the blonde highlights, I’m guessing. 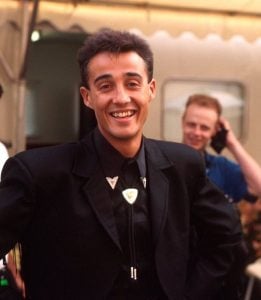 Placing his natural good looks to one side, Ridgeley was often unfairly dismissed by the music media as ‘the other guy from Wham!’, yet was a (and yes, here’s that word again) natural performer on stage. What’s more, although his Wham! partner soaked up most of the plaudits for the group’s success, it’s Andrew who originally showed Michael the ropes. At least in terms of learning stage craft and writing music, due to the former benefitting from more musical experience.

There remains some conflicting information as to just when and where ‘Careless Whisper’ was first conceived as a song, which still rumbles on to this very day. According to some sources the pair put down the lyrics while both sat on the back of their school bus on their journey home from Hertfordshire’s Bushey Meads School, while other equally reliable acknowledgements cite another bus and another journey. 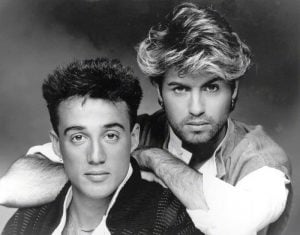 Specifically 17-year old Michael’s solo ride to work one time, as he headed off to his (then) job as a cinema usher. Either way, the resultant hit peaked at number one in 25 country’s charts on its release and paved the way for Wham!’s accumulative successes.

5. Wham! Knew That Size Was Important….

Hence why they changed their image ahead of their ‘difficult’ second album. Aren’t second albums always supposedly difficult?? ‘Make it Big’ was perceived as something of a departure from Wham!’s debut long player, as gone was the leather wardrobe and angst-y political undercurrents, replaced with an altogether fluffier, friendlier pop soundscape. 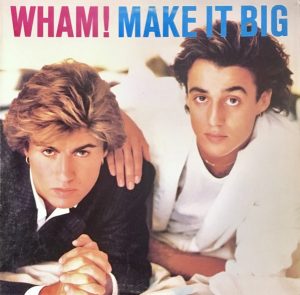 George spoke of this groundshift in 1988, and admitted he welcomed Andrew’s input (as it was he who championed the revisions). He told an interviewer how he’s never felt comfortable as an artist prancing around in white tennis shorts and various earrings, and thought he looked far too feminine. In conversation with Q Magazine Michael said; “When I look back on that it’s so disgustingly embarrassing. I saw a clip from (‘Wake Me Up Before You) Go-Go’ recently and I thought, Who the f–k is that? What the f–k was I trying to prove? I’ve never really been quite sure who in the audience goes for this look.”

4. Point to Make, Not Break

Staying with Ridgeley, and few people are probably aware of this interesting factoid, but the surviving member of Wham! is an avid surfer in his spare time. Which I assume he has had a fair bit of these last few decades. 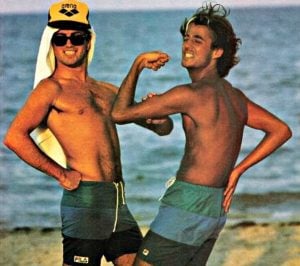 But more than simply enjoying seeking out the perfect swell and subsequently riding the surf, Andrew is also a high profile supporter of the Surfers Against sewage environmental health group. Which habitually advocates the end of waste being dumped in our oceans, and which right now as a general subject matter is justifiably receiving plenty of plastic-related headlines.

Wham!’s tour of China in April 1985 represented the first time a western pop music act had ever been invited to visit what was – and to some degree, remains – a notoriously reclusive country, often suspicious of the rest of the world. 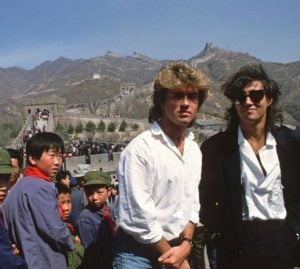 The event proved a huge success and understandably generated a media frenzy far and wide, with coverage of the tour making newspaper front pages globally. Remember, these were the days before the internet. Not that many in China can easily access that today even, thanks to state censorship.

The inspiration for Wham!’s breakthrough hit single, ‘Wake Me Up Before You Go-go’ is credited to Andrew Ridgeley, yet also his mum should receive some recognition in the creative process, surely? 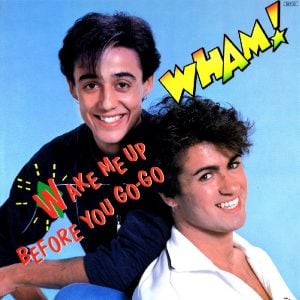 And the reason for this claim? Well, it was her who was the recipient of the note Ridgeley left one day, which simply requested that his mum should (and yes, you know where I’m going with this now….), ‘Wake Me Up Before You Go-go’. Whether the place his mum was headed was work or a coffee morning, nobody knows, while Andrew’s exact plans for rest of that particular day are also lost in the mists of time. But without note, Wham! may never have been.

Noticing a shift in the emotive side of his own song-writing, George Michael decided it was time to call it a day with Wham! And in June 1986 the duo played their farewell show to a sell-out crowd of some 72,000 fans at Wembley Stadium. 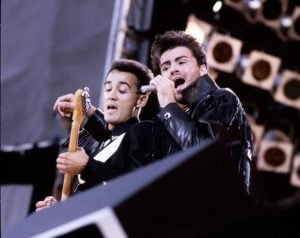 Persistent rumours of arguments between the founding members were bandied around like there was no tomorrow (which of course, there wasn’t going to be for Wham!), yet George maintained that it was artistic differences which brought about the beginning of the end.

His reasoning being a desire to pen more honest emotions in records he made, which people could relate to easier, and hinted that the song-writing process in Wham!’s latter days had stifled his creativity.