90s kids will be delighted to hear that the cast of Mrs Doubtfire recently got together for a mini reunion to mark 25 years since the film was released.

Actors Lisa Jakub, Matthew Lawrence and Mara Wilson played the children of divorced actor Daniel Hillard (Robin Williams) in the hilarious comedy, and all three of them recently decided to meet up for an interview with The Today Show. 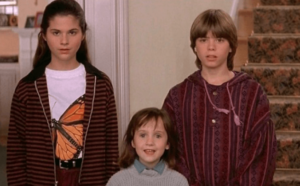 Sadly Williams – who played the iconic role of Mrs Doubtfire – passed away in 2014, but Pierce Brosnan was there to try and fill in for him. Fans of the movie will remember that Brosnan played Stu, the new boyfriend to Sally Field’s character Miranda.

There was plenty of nostalgia for 90s kids when Lisa posted an Instagram photo alongside her fellow castmates.

She also shared a short video of Brosnan doing a ‘then and now’ comparison of the film’s youngsters. The actor can be heard saying in the background: “And here we are… we pull back slowly and ta-da!,”

He then adds: “Love you, love you all so much, it’s so good to be part of your lives.”

The former 007 star also had some kind words for his late co-star Williams and posted his own tribute on Instagram.

“I gathered around a table in the company of three beautiful young people, to talk about a film that has touched the hearts of so many.”

He then continued: “Robin is in heaven making the angels laugh and was spoken of with the fondest of love and sweet memories.”

Unfortunately Sally Field was unable to join the reunion because she is currently undertaking a hectic book tour.

So what have the three stars been up to since appearing in Mrs Doubtfire?

Lisa went on to make another hit 90s film, starring in Independence Day, before becoming a yoga teacher and writer. Mara is also a writer whilst Matthew, 38, is a musician.

Look out for the exclusive interview on NBC next month!