Although some have been discontinued along the way, many of our favourite snacks have happily stuck around for decades. One thing has changed across all of them, though: the packaging. Over the years, our favourite chocolate bars, crisps and assorted other treats have undergone multiple branding makeovers – like the following snacks, whose packets now look markedly different from when we grew up. 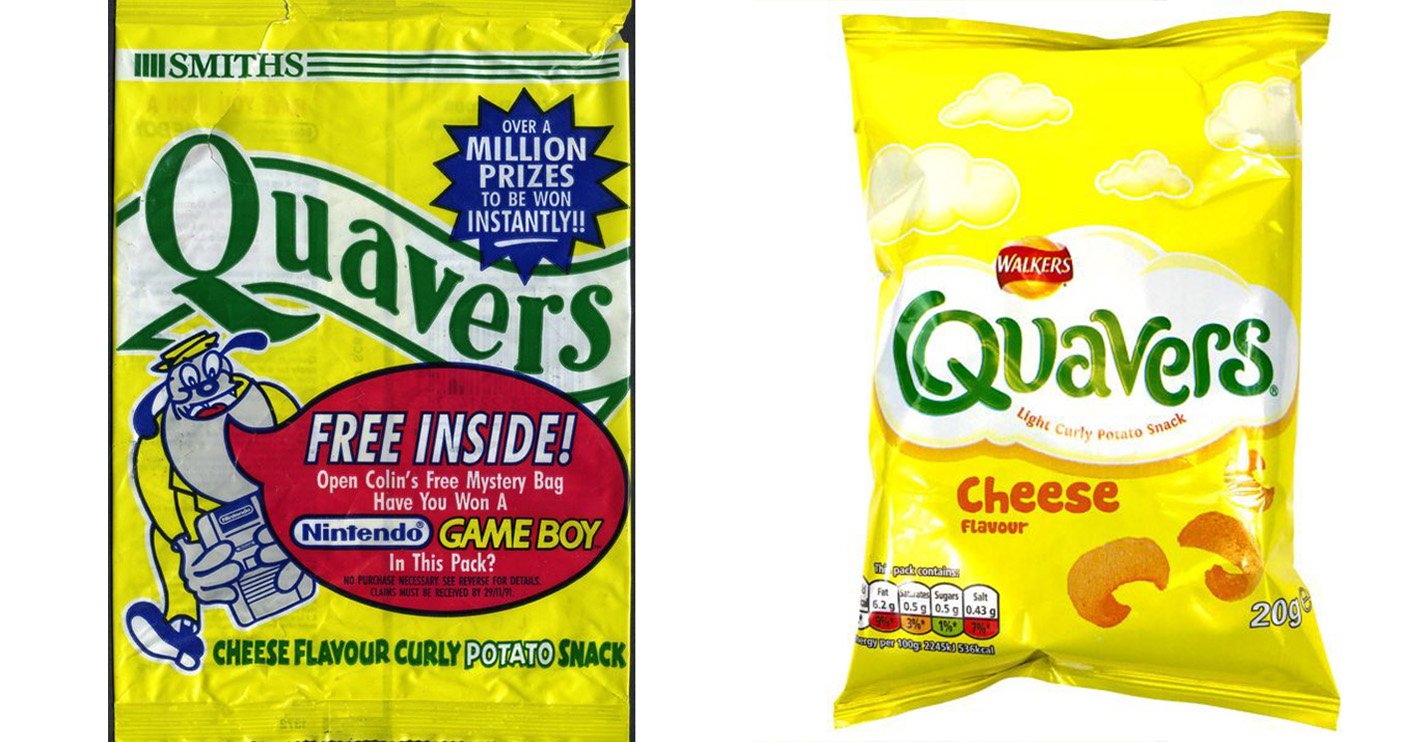 Quavers, the cheesy curly snack, were made by Smiths back in the good old days – but after a corporate takeover in the 90s, they were one of a number of Smiths products relaunched by Walkers crisps.

Who else remembers that crazy dog that was used in a series of adverts back in the day and also made it onto the packets, too? 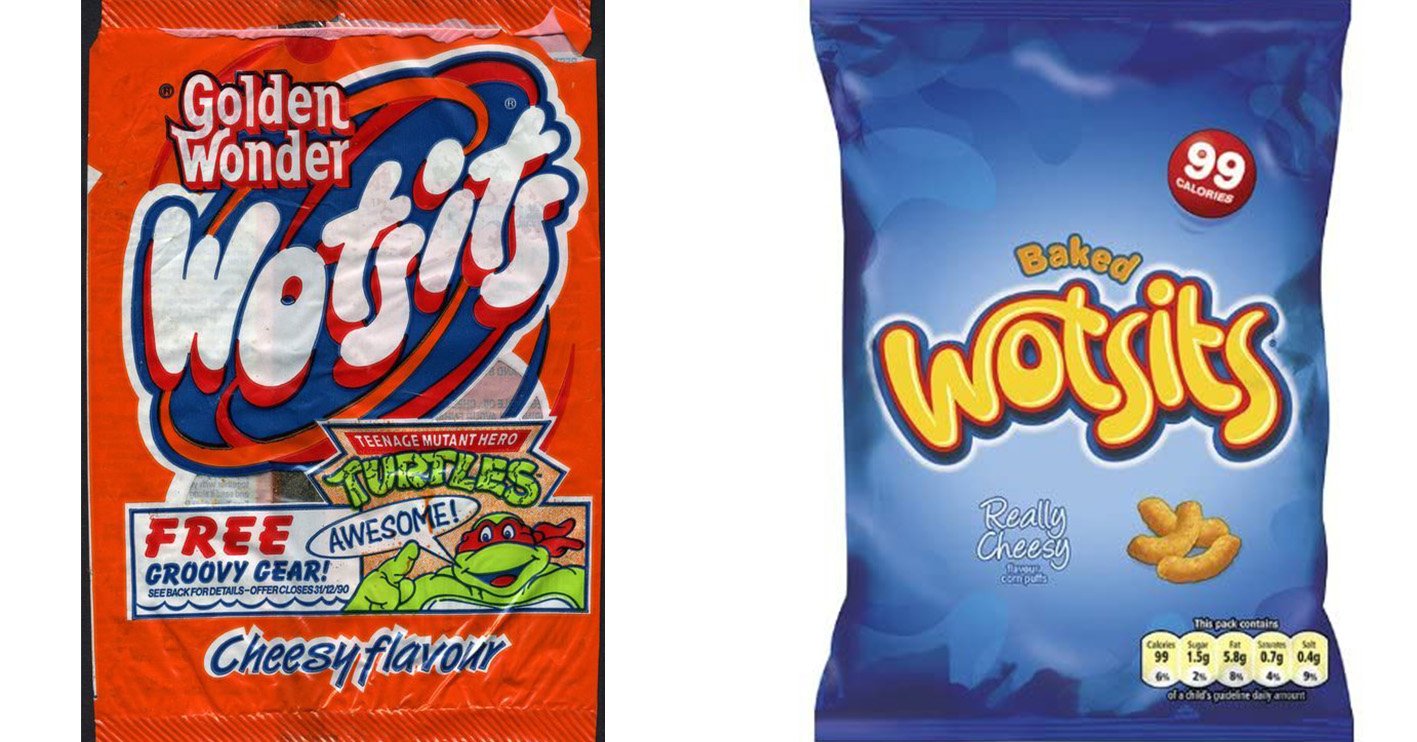 Another cheesy snack, this time the mini-sausage shaped ones with more of a crunch than Quavers. Everyone knew when you’d eaten some, as that orange dust was seemingly impossible to get off!

The packs are totally different now to how they used to be, but they remain as much of a cheesy, melt-in-your-mouth delight as ever. 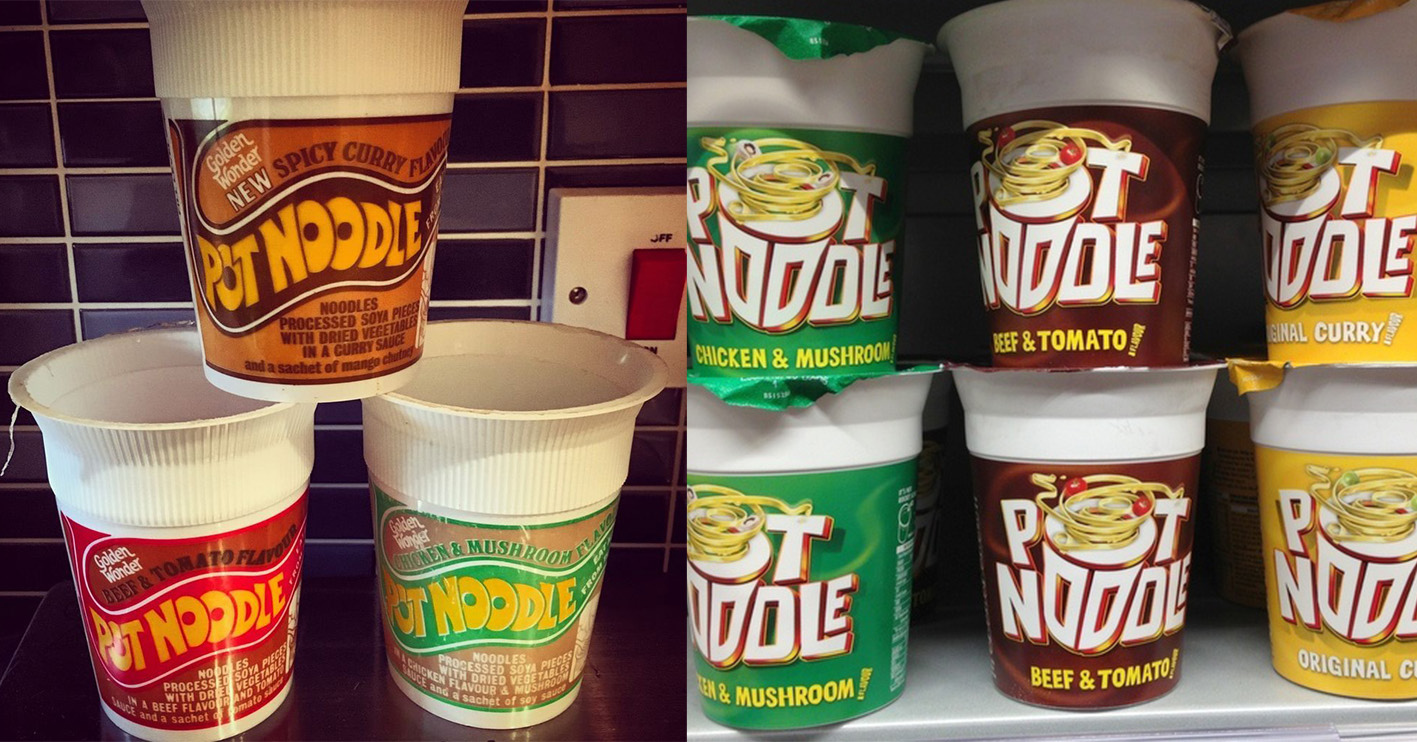 The pot snack full of noodles and flavoured water: mmmm, when you say it like that how can you resist? They’re the classic lazy person’s dinner option.

Pot Noodles remain popular these days, although the packaging is pretty far removed from the way it used to look back in the 80s and 90s. 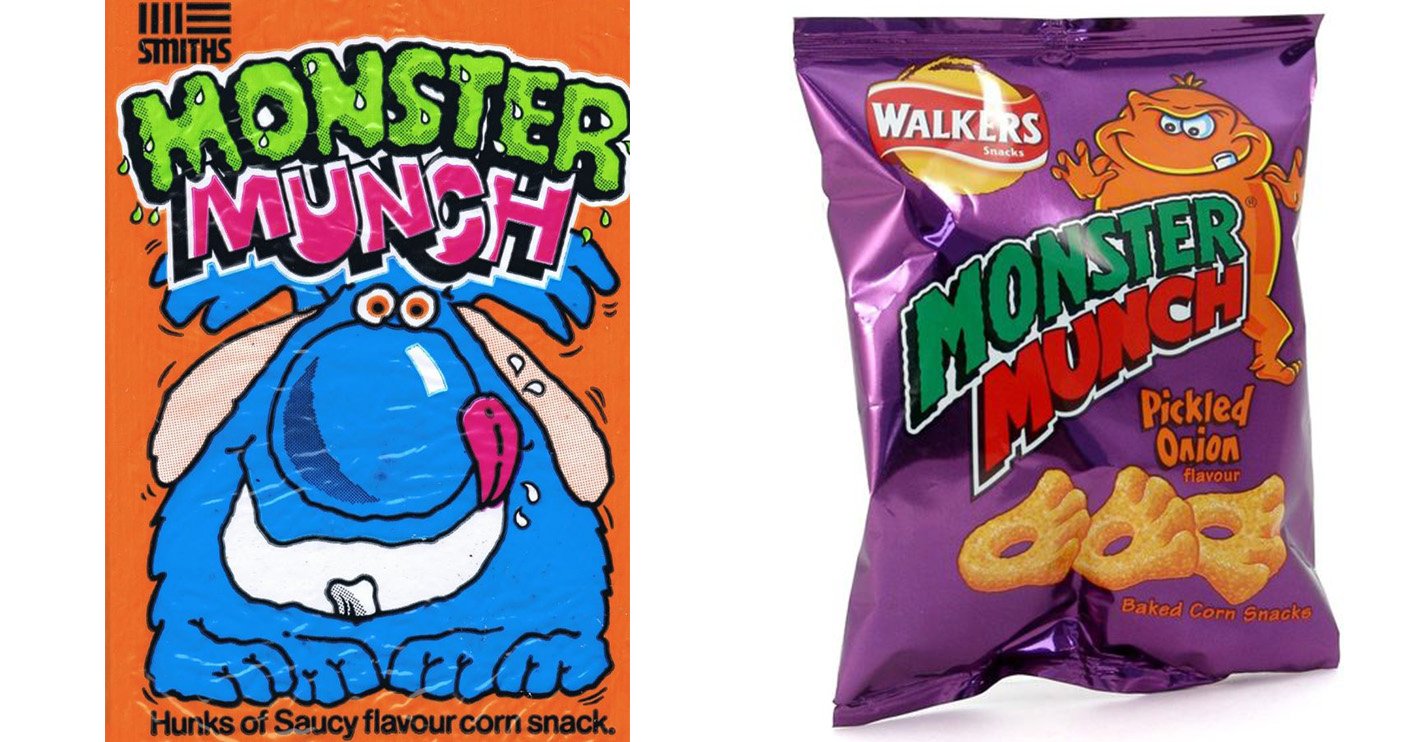 Crunchy, melt-in-the-mouth corn snacks shaped like claws, Monster Munch was a huge favourite of many kids back in the 80s. The brand’s popularity was helped by its colourful packaging and fun TV ads featuring monster puppets.

Today, Monster Munch packets have a flashier, more vibrant look – but those distinctive flavours remain, thankfully, as does the signature monster foot shape. 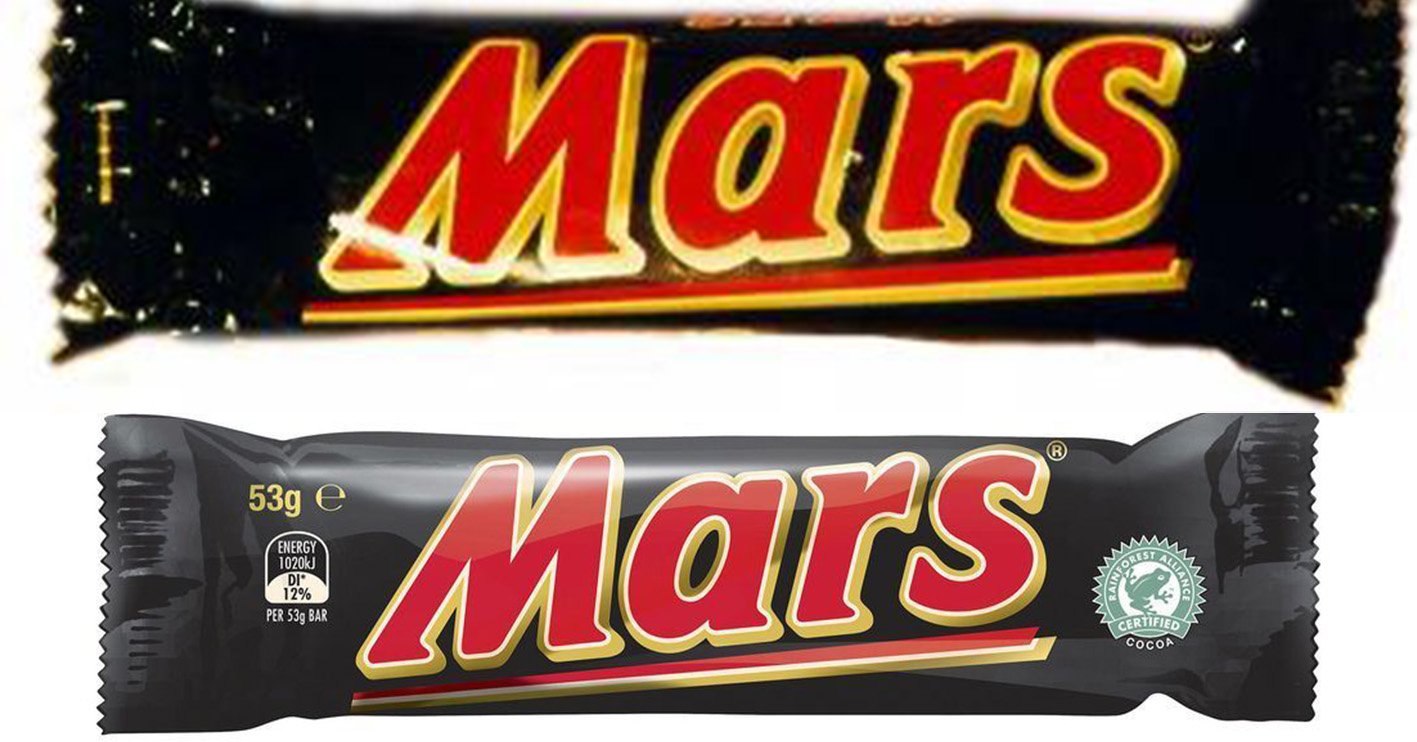 The signature bar of the Mars brand, this timeless blend of chocolate, caramel and nougat is one of the best loved sweets of them all – and its iconic label design is definitely part of its enduring appeal.

This is one instance when the manufacturers have clearly taken an “if it ain’t broke, don’t fix it” approach, as while the design has subtle minor changes, it’s still immediately recognisable. 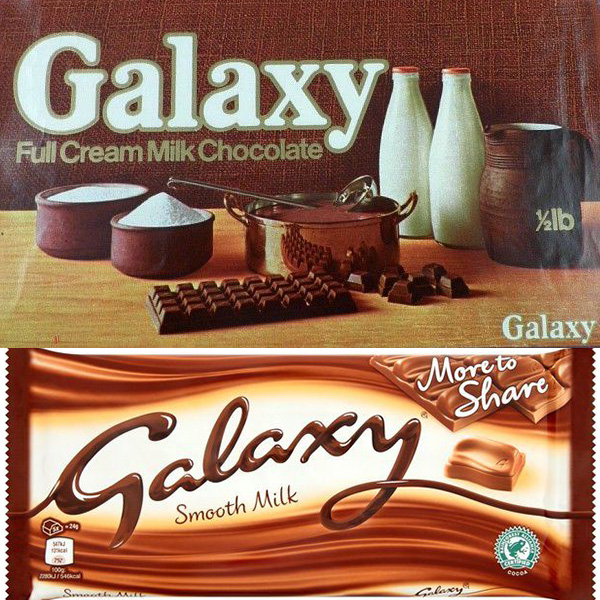 As the old slogan used to tell us, why have cotton when you can have silk? Galaxy has always been sold as the smoother, creamier option for chocolate lovers.

The Galaxy logo and packaging has been radically altered over the years; where once it was mostly plain brown, now it’s a blend of smooth brown and white curves, to better convey that sense of silkiness. 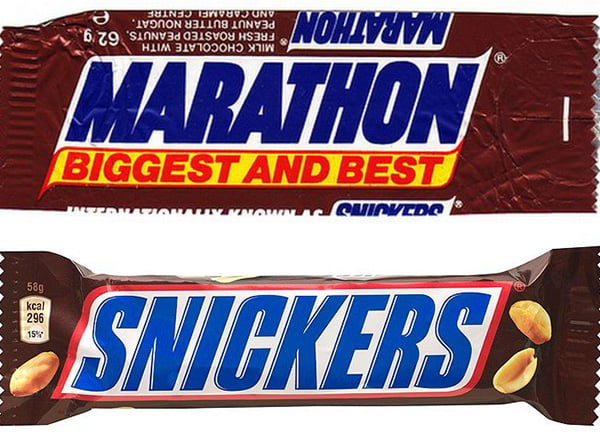 British readers of a certain age will remember when the bar everyone else knew as Snickers (basically Mars with peanuts) was known by a very different and far less ridiculous name: the Marathon bar!

This ended in 1990, when it was officially rebranded as Snickers in the UK. Otherwise, the logo and the brown packaging isn’t a million miles away from what it used to be. 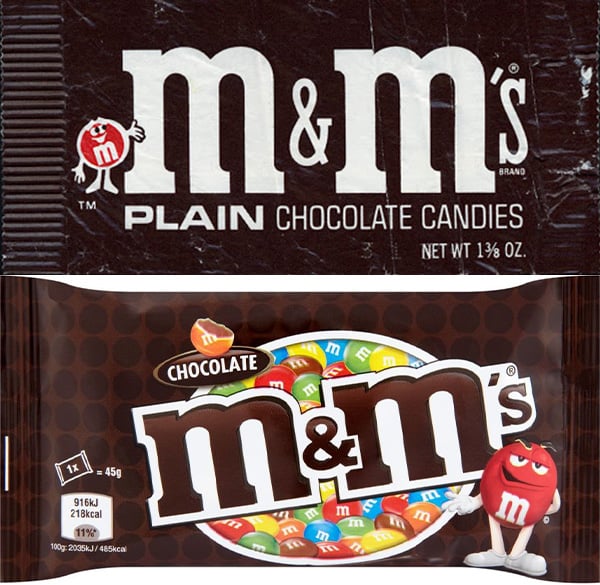 The classic, colourful miniature candies which melt in your mouth but not in your hands have been a big favourite of young and old for many years (even if, in Britain, we tended to prefer our homegrown variation, Smarties).

Today, they’ve got a slightly more cartoonish design, to tie in with the popular TV commercials and marketing empire centred on the walking, talking, frequently wisecracking M&Ms. 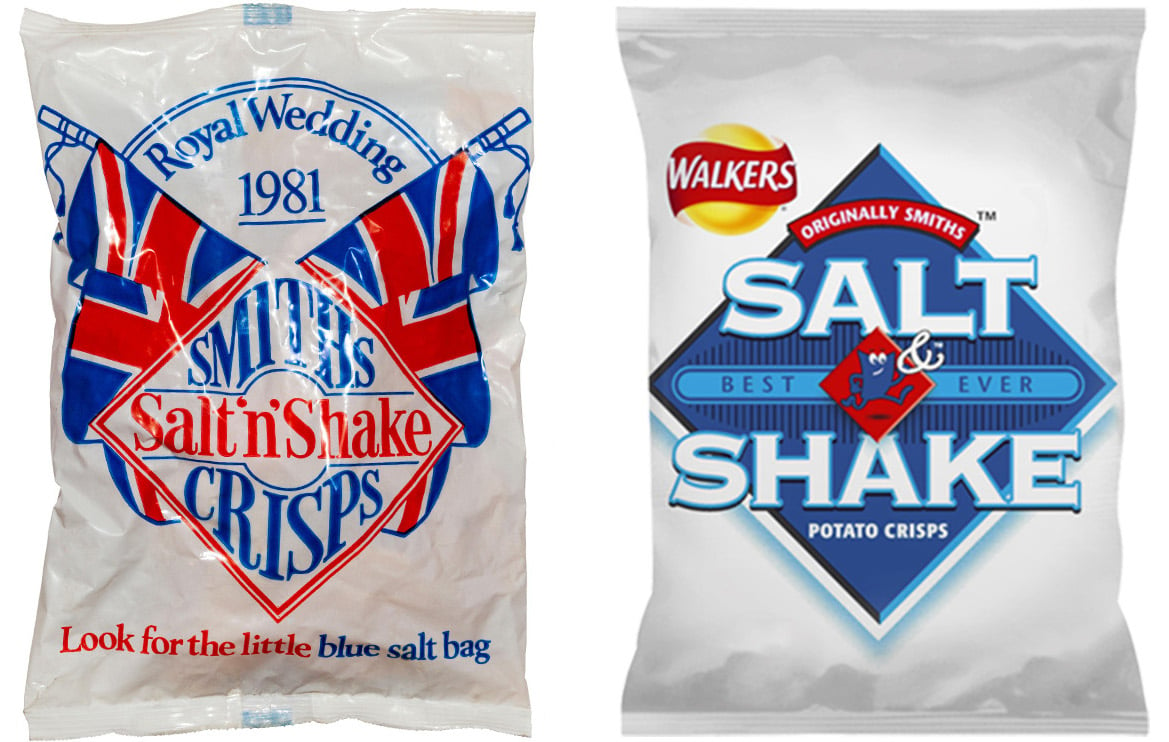 Ready salted crisps were all well and good, but there was something so much more fun about a big of crisps which come with a blue salt sachet so you can add the flavour yourself.

Much like Quavers, Salt’n’Shake (or, as they’re branded today, Salt & Shake) were previously a Smiths product, now produced by Walkers. 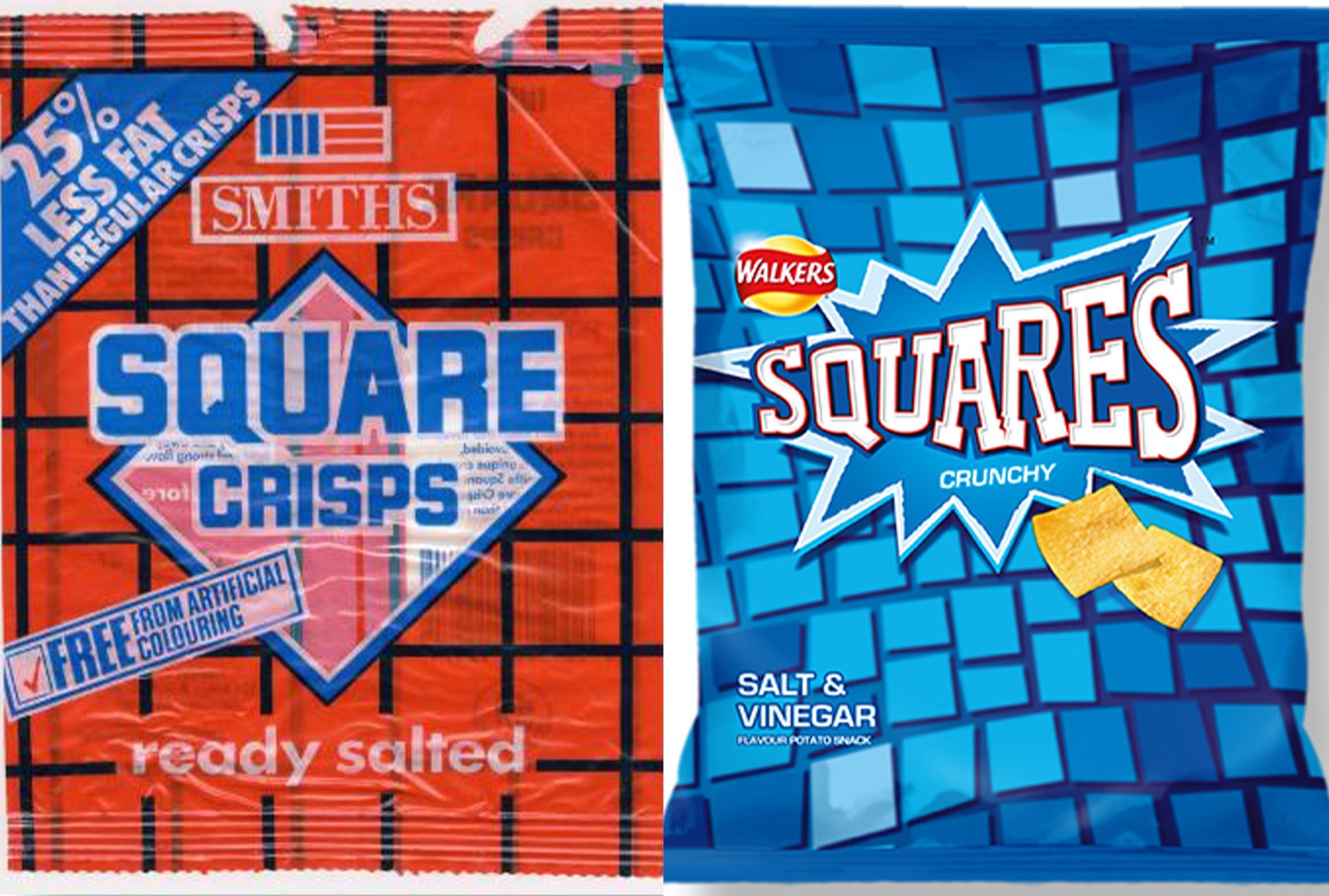 You wouldn’t have thought that the shape of a crisp would really make that much difference to its taste and texture, yet the extra crunchiness of Smith’s Square Crisps made them irresistible.

Square Crisps are one brand that are pretty much unrecognisable from their former packaging: today they’re made by Walkers, the name has been amended to Squares, and the design is totally different. 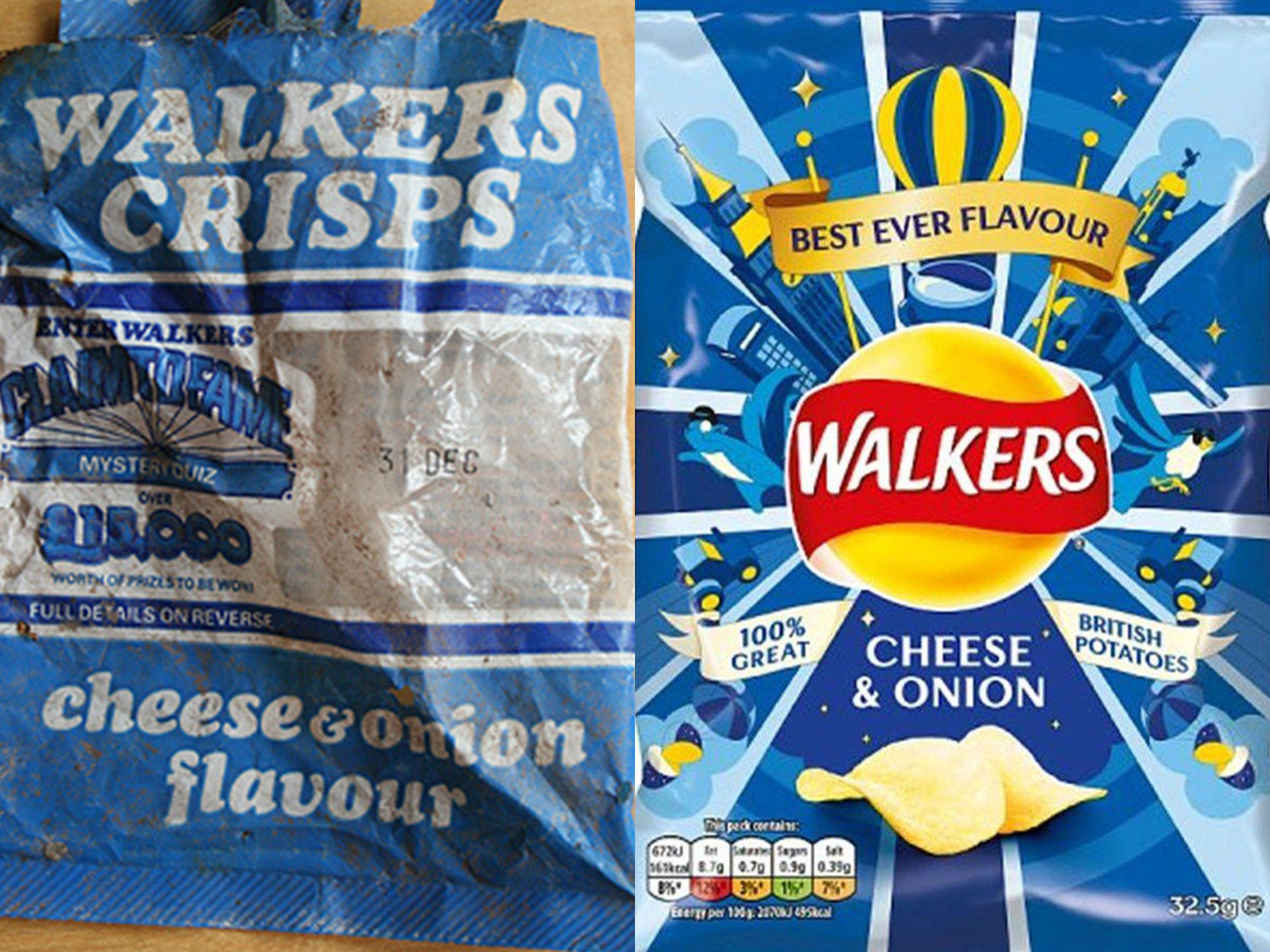 Yes, on top of producing crisps previously made by old competitors Smiths, Walkers also continue to produce their own classic crisp, which became the nation’s favourite.

The bags look very different these days, with the new and eye-catching Walkers logo, and the removal of the old see-through panel into the bag. 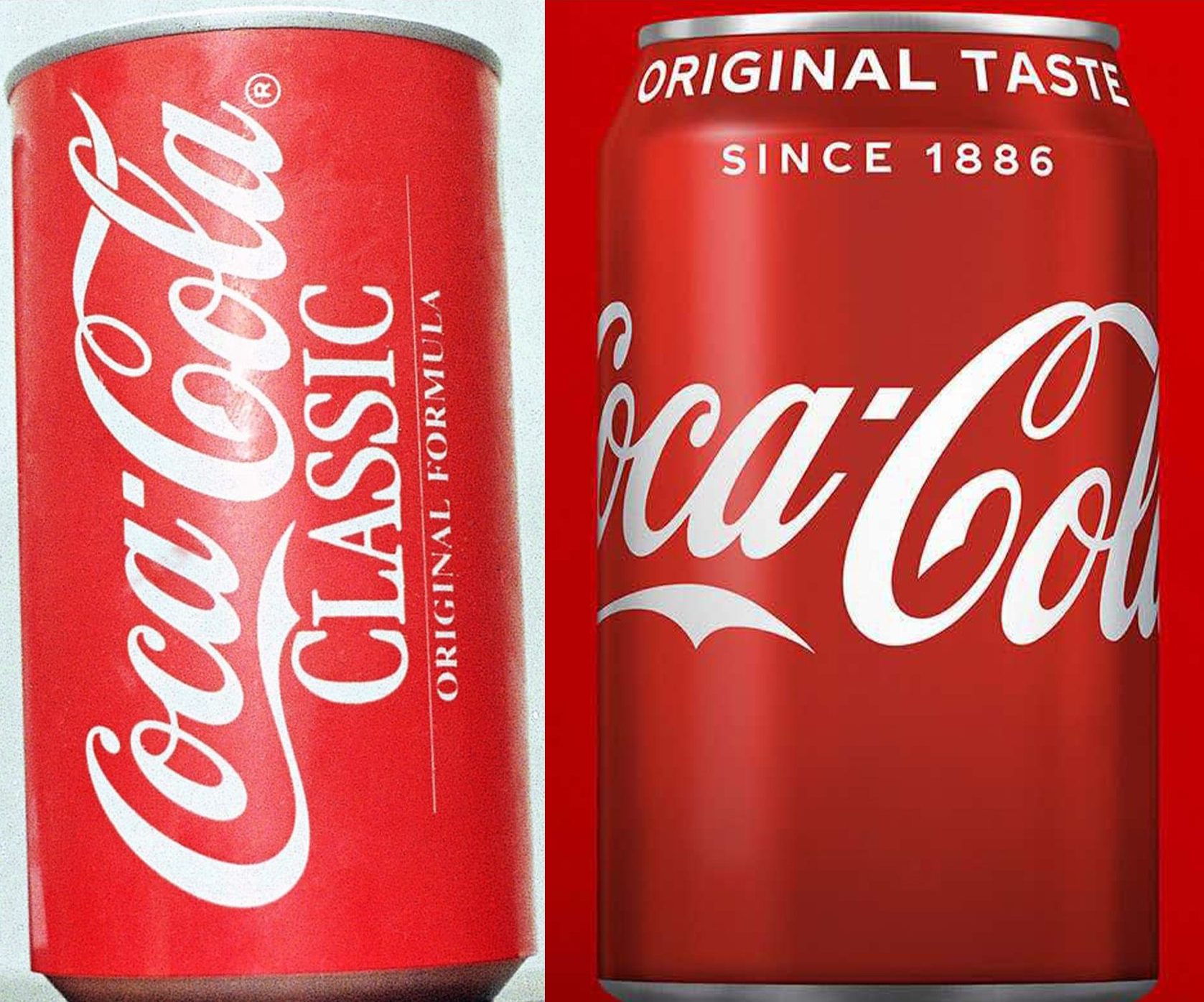 Coca-Cola is one of the longest-standing, biggest-selling drinks in the history of the world – and the brand’s instantly recognisable packaging has a big part to play in that, be it in can or classic glass bottle form.

While the label design may have undergone slight changes, the classic logo and red cans remain, as does the classic flavour after that ill-advised New Coke experiment of the early 80s. (Of course, today we also have all the Diet Coke and Coke Zero options.) 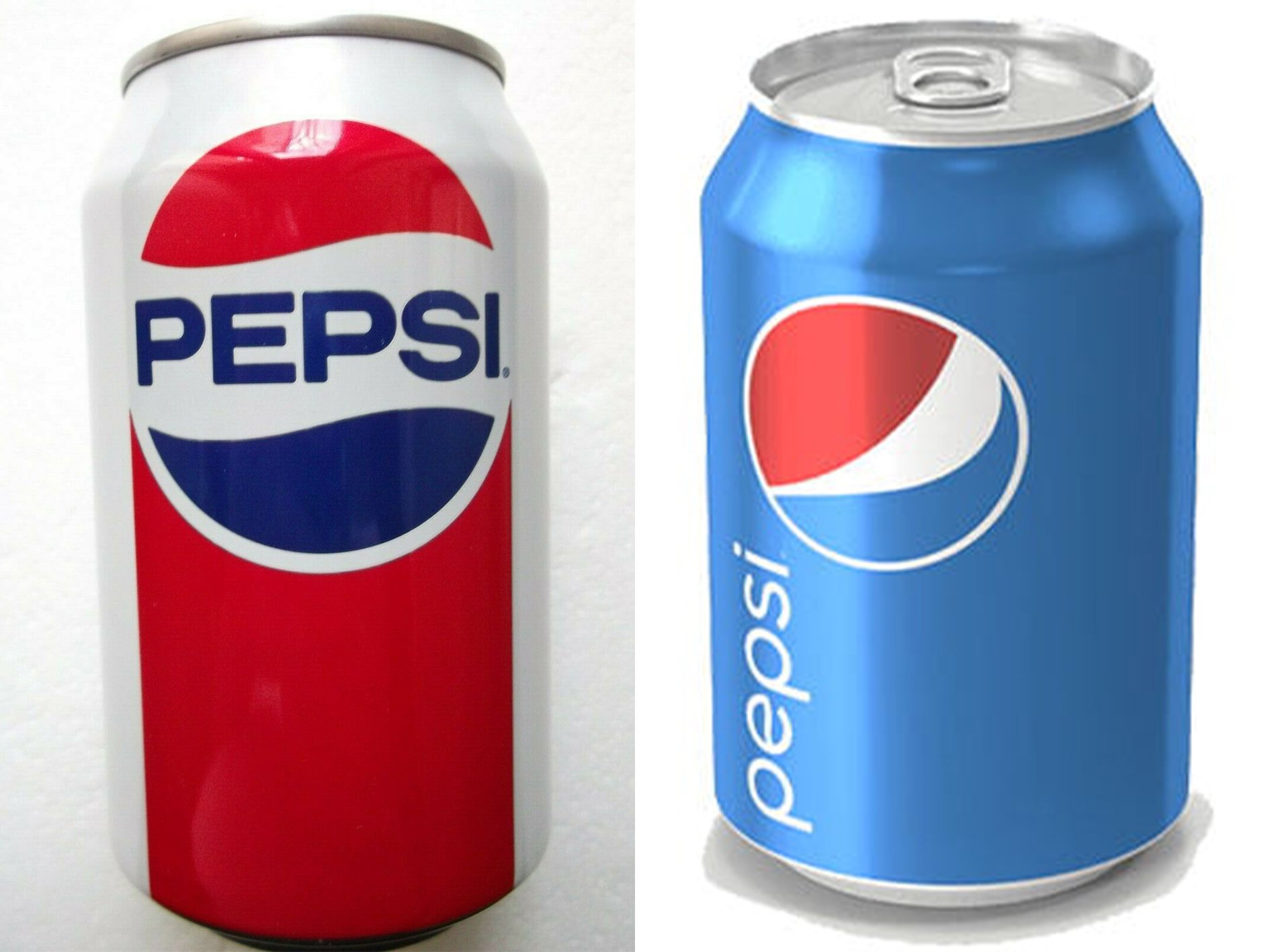 Coke’s long-time rival, Pepsi have kept their brand fresh by taking the complete opposite approach: rather than sticking to one classic design, they’ve regularly updated their look, always keeping the signature red, white and blue circle which they’ve used since the 1950s.

With 12 redesigns to date, Pepsi have adopted a new look on average once every decade; there have been six redesigns since the 80s. Their last image change was in 2014, so presumably we can expect another new look any day now…