10 Reasons Xanadu Is The Craziest Musical Ever Made

Xanadu is a musical fantasy movie starring Aussie legend Olivia Newton-John, classic Hollywood leading man Gene Kelly, and Michael Beck. It was released in 1980 to very little fanfare, only just scraping its budget back at the box office and it was forgotten soon after, living on only in the few Olivia Newton-John songs from the soundtrack that made their way into the charts.

However, years later it has become a cult classic of sorts, and with its intoxicating mix of earnestness, overconfidence and surrealism, it’s easy to see why. Some might call director Robert Greenwald’s film a so-bad-it’s-good movie, but either way you can’t deny there’s no other movie musical quite like it. Here are some reasons why… 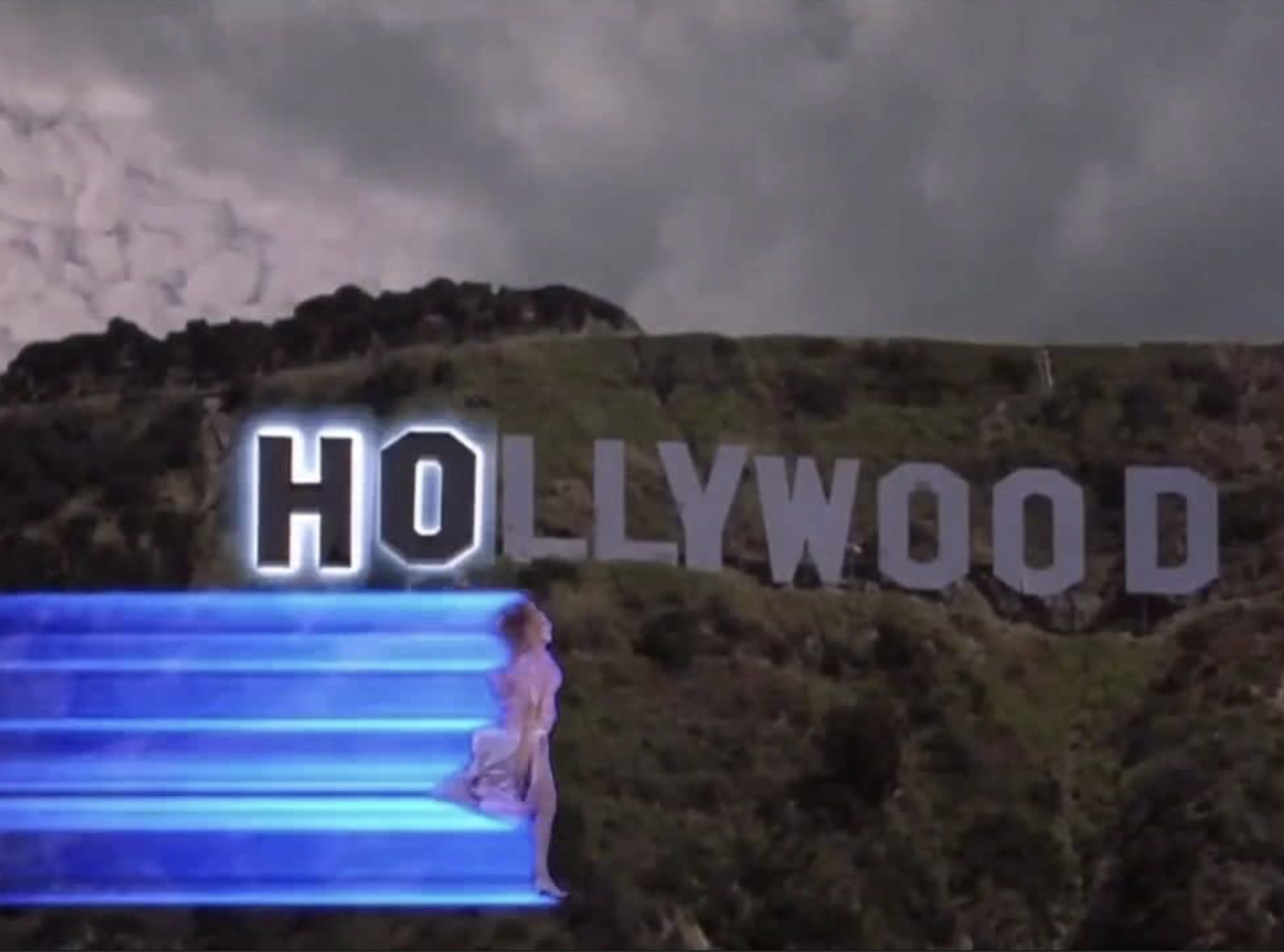 The screen wipes of 1977 classic Star Wars might seem like a delightfully anachronistic flourish to us now, but Xanadu makes them look downright minimalist. Here, scene transitions are marked with a vertical or horizontal screen wipe at the very least, if not a matrix wipe or a clock wipe.

At one point in the movie, a jump cut even occurs after the neon shape of a vintage car is projected across the screen. Xanadu unapologetically carries the over-the-top tone of the movie into the editing, to the point where you almost expect a star wipe to happen at any moment.

Gene Kelly gets a dress-up montage 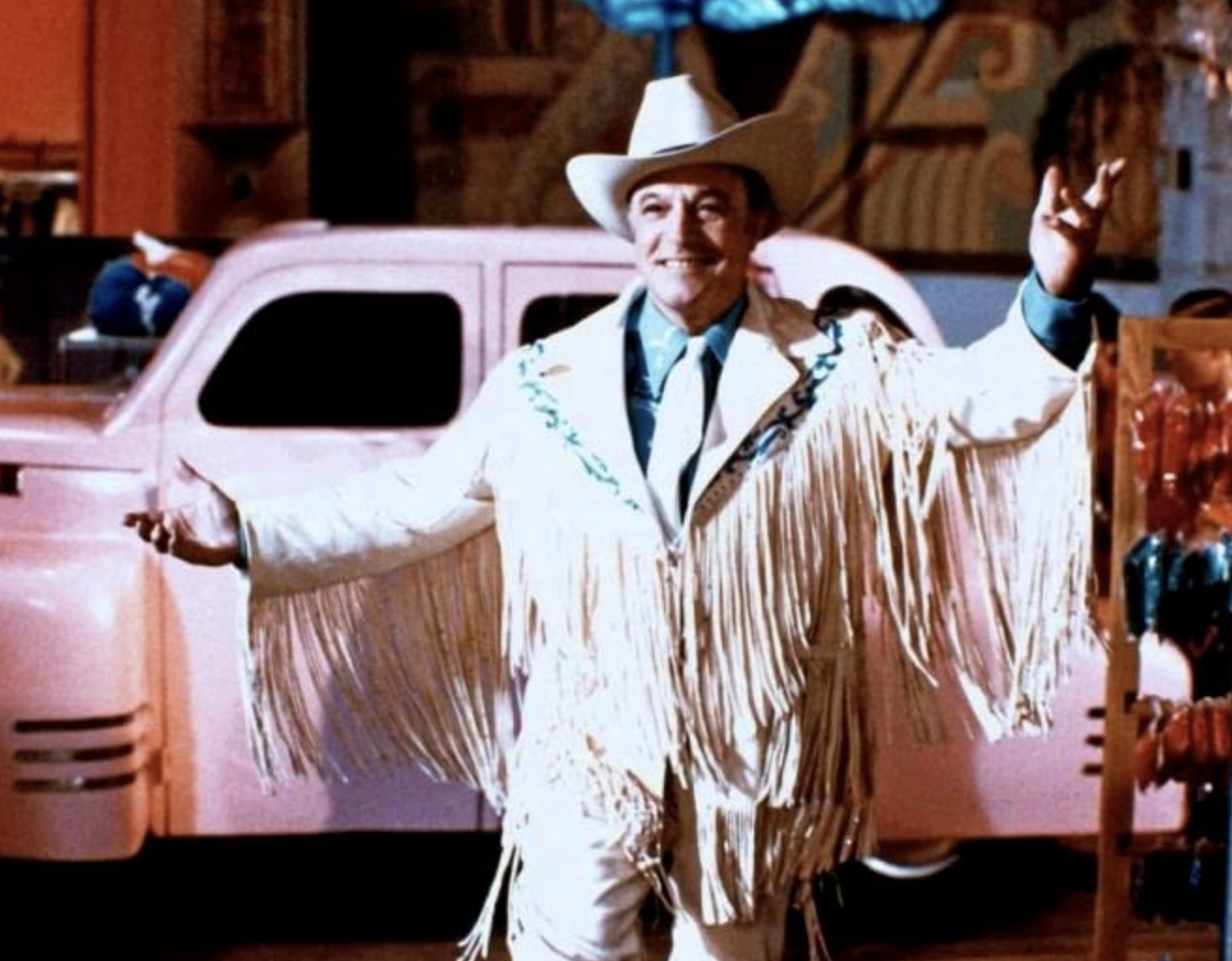 Gene Kelly is a bona fide Hollywood legend. He dominated Hollywood in the 40s and 50s, starring in countless musicals and movies that went on to become classics. In Xanadu, he plays a former celebrity conductor and big band enthusiast named Danny McGuire, who carries the same sophistication, class and poise of Kelly’s golden age characters. That is, until his dress-up montage.

His new business partner Sonny, and Kira the immortal muse, convince McGuire that his classic 50s get up is simply not appropriate for the exciting new world of the 80s. Cue an extended sequence where Gene Kelly tapdances way through a whole wardrobe of comedic and scenario-specific outfits until he finally lands on a horrifically loud suit. 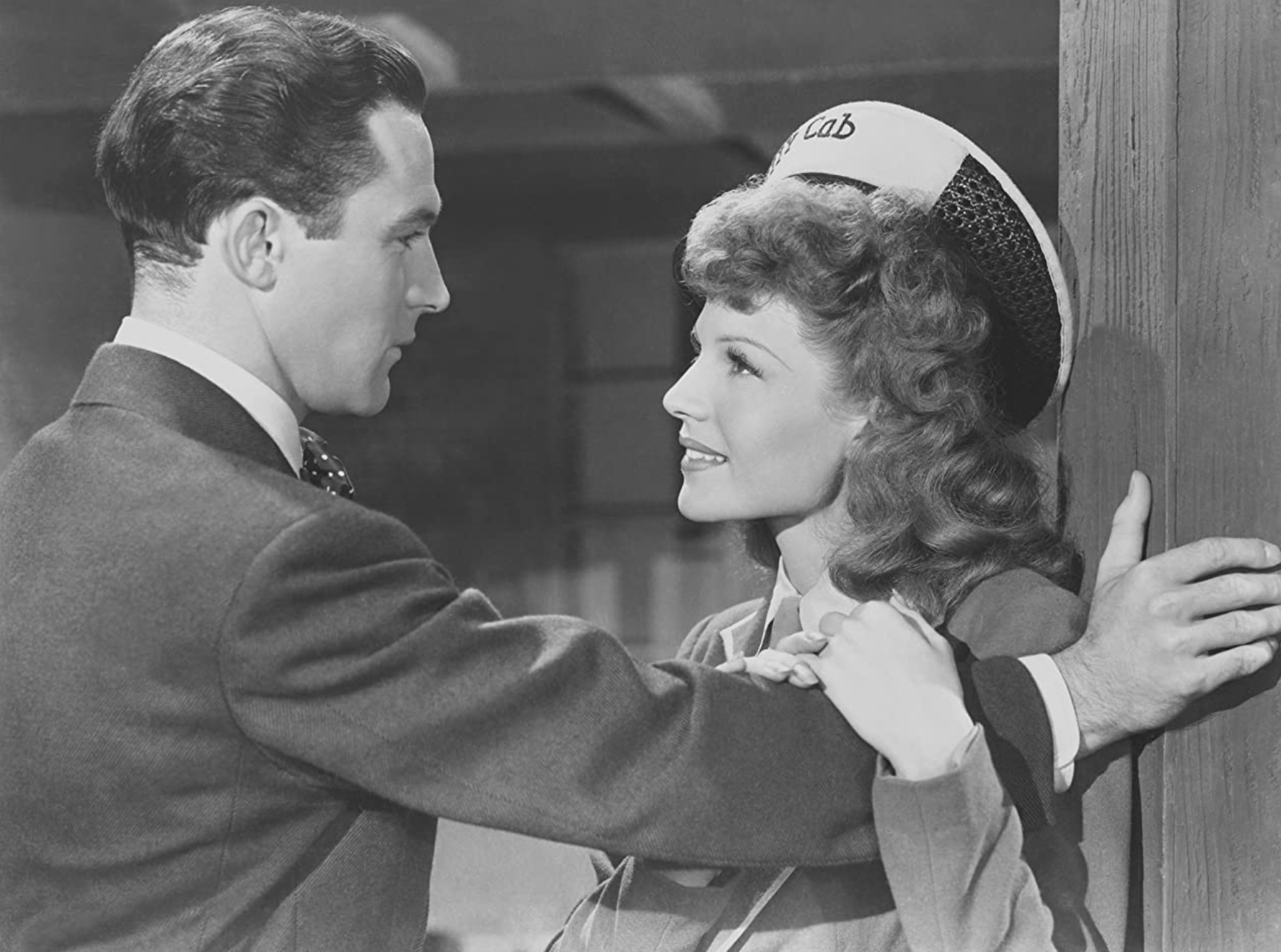 Xanadu tries to be a lot of things at once: a classic Hollywood love story, a rocking 80s musical and a roller disco movie. Given that it tries to tackle so many genres at a time, it’s actually not that surprising that it’s also technically a crossover movie and a stealth sequel: Gene Kelly had played the character of Danny McGuire before, almost 35 years before Xanadu was conceived.

Big band enthusiast Danny McGuire first appeared in Cover Girl, a 1944 comedy musical that sees Kelly star alongside fellow screen icon Rita Hayworth. In the film, McGuire runs a nightclub that is his pride and joy, all the while dating one of the chorus girls working there (Hayworth). Cover Girl also includes a mystical subplot with identical muses appearing to different men across their lifetimes.

There’s no reason for the roller-rink plot point 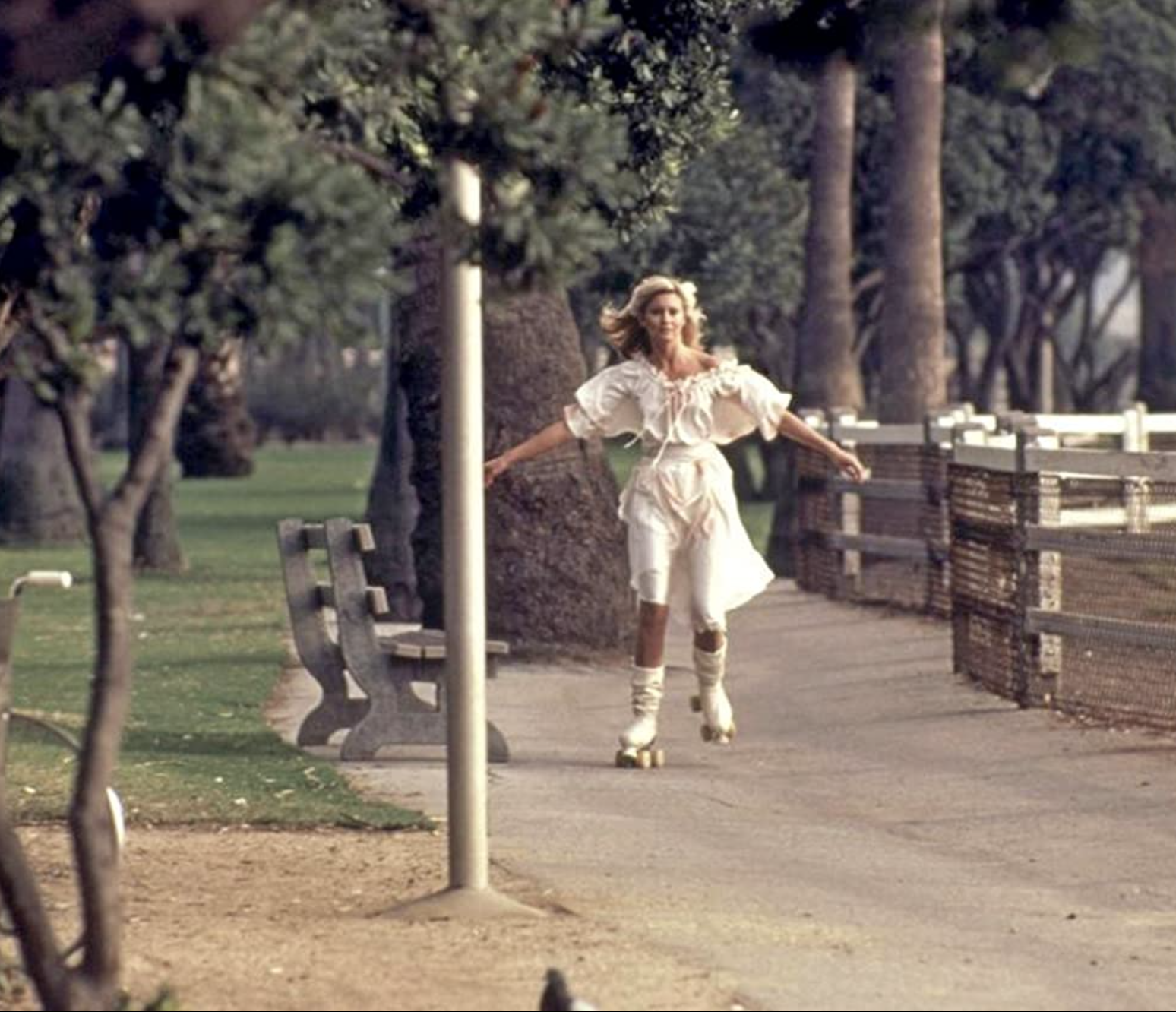 Roller-skating is a huge part of Xanadu. Olivia Newton-John’s Kira spends the bulk of the film on skates, and the central plot revolves around Sonny and Danny collaborating on a huge roller rink, where rock bands and swing dancing can co-exist peacefully. The problem is, when you break it down, Xanadu really doesn’t need to be about roller-skating.

Sonny is an artist whose main passion is painting, while Danny McGuire is obsessed with swing dancing and big band music: neither of them have the level of passion for skating needed to own and manage a roller rink. Once you realise that the plot could function just as well if Sonny had been hired to paint colourful 80s murals all over Danny’s drab 50s dance hall, the roller-skating element seems pointless. 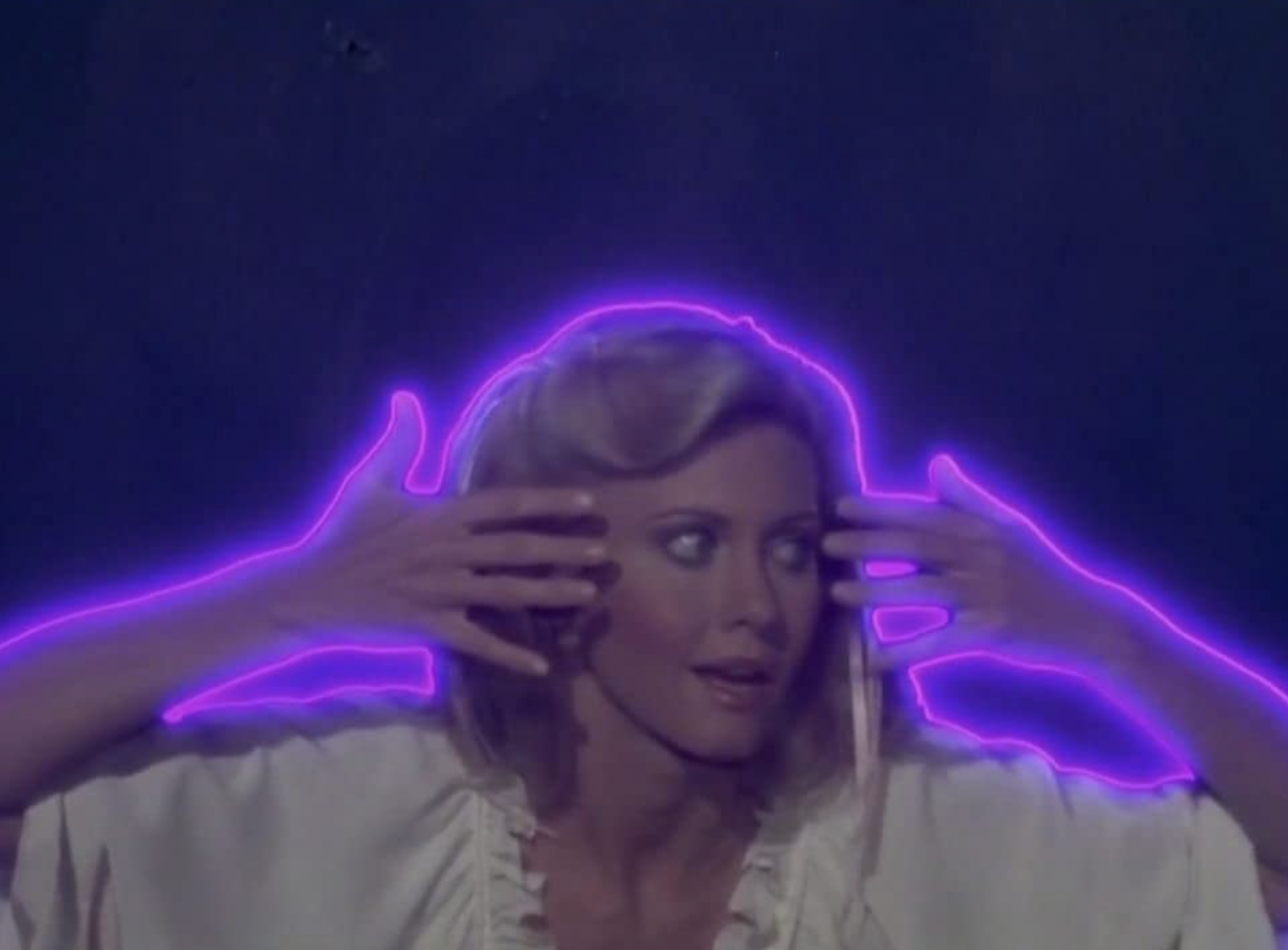 There’s no denying that Olivia Newton-John is the star of Xanadu. She’s also key to the film’s big magical twist, when it is revealed that, far from being just another California girl on roller-skates, Kira is actually a muse named Terpsichore, who was summoned when Sonny threw one of his paintings out of a window in a fit of frustration.

The problem is, Terpsichore is actually the muse of dance and chorus, so why was she brought to life by a painting? Not only that, but why would she bring painter Sonny on board to build a dance venue in the first place? The Broadway musical adaptation suffered further mythological confusion by revealing Kira to instead be Clio, the muse of Lyre playing, which has even less to do with Sonny’s character.

It led to the creation of the Razzies 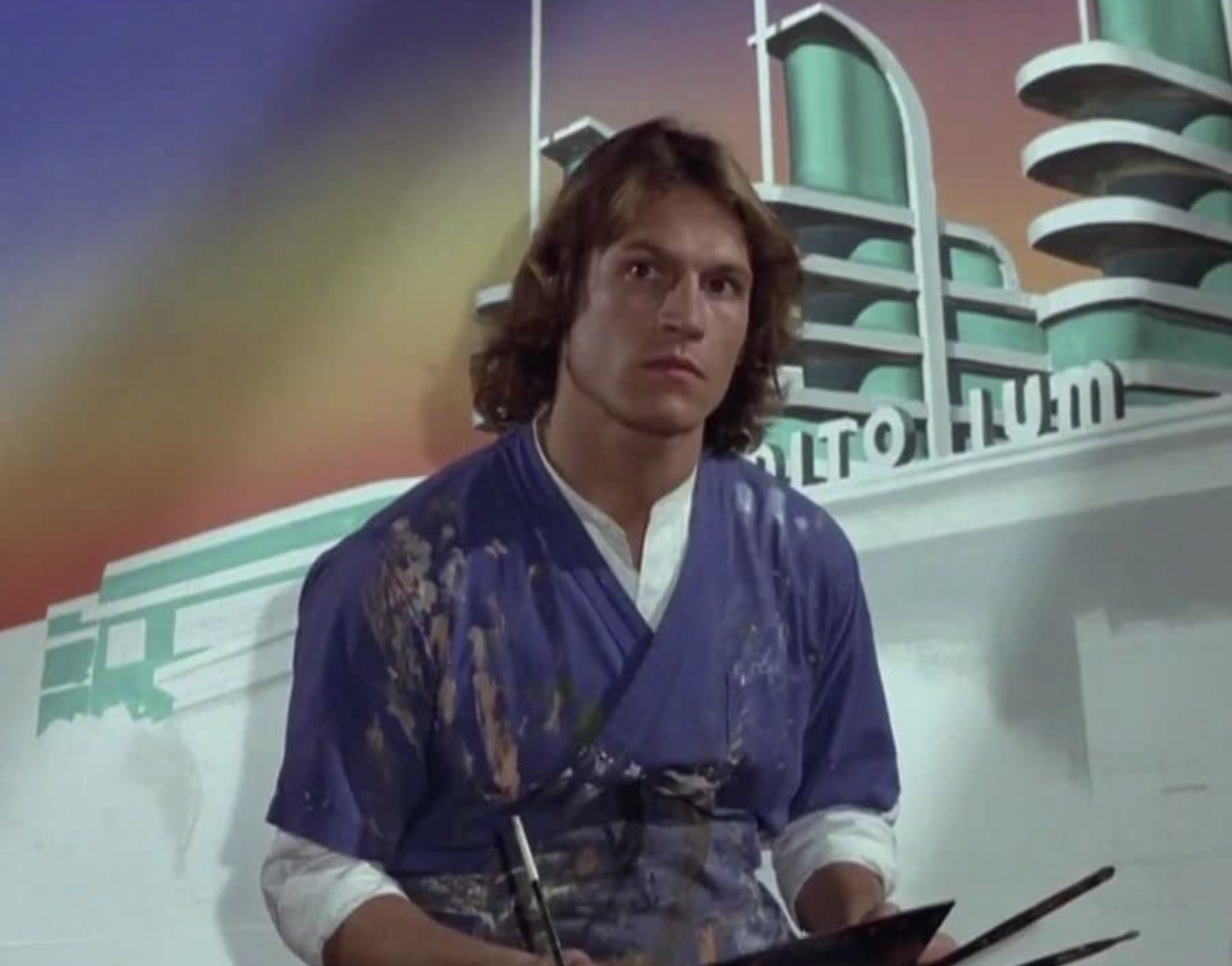 Xanadu was originally conceived as a sweet and small love story between two roller-skaters. However, as more stars agreed to come on board, the project ballooned into something far bigger. The addition of Greek gods, Gene Kelly and Electric Light Orchestra all came later, and by that point it was too late to rein the project back in.

We should be grateful that Xanadu got so out of control though, as without it we never would have gotten the Golden Raspberry Awards. Creator of the Razzies John J.B Wilson was inspired to create an awards show dishonouring Hollywood’s worst output after sitting through a double-feature of Xanadu and Can’t Stop the Music, another musical comedy that loosely portrayed itself as a Village People biopic. 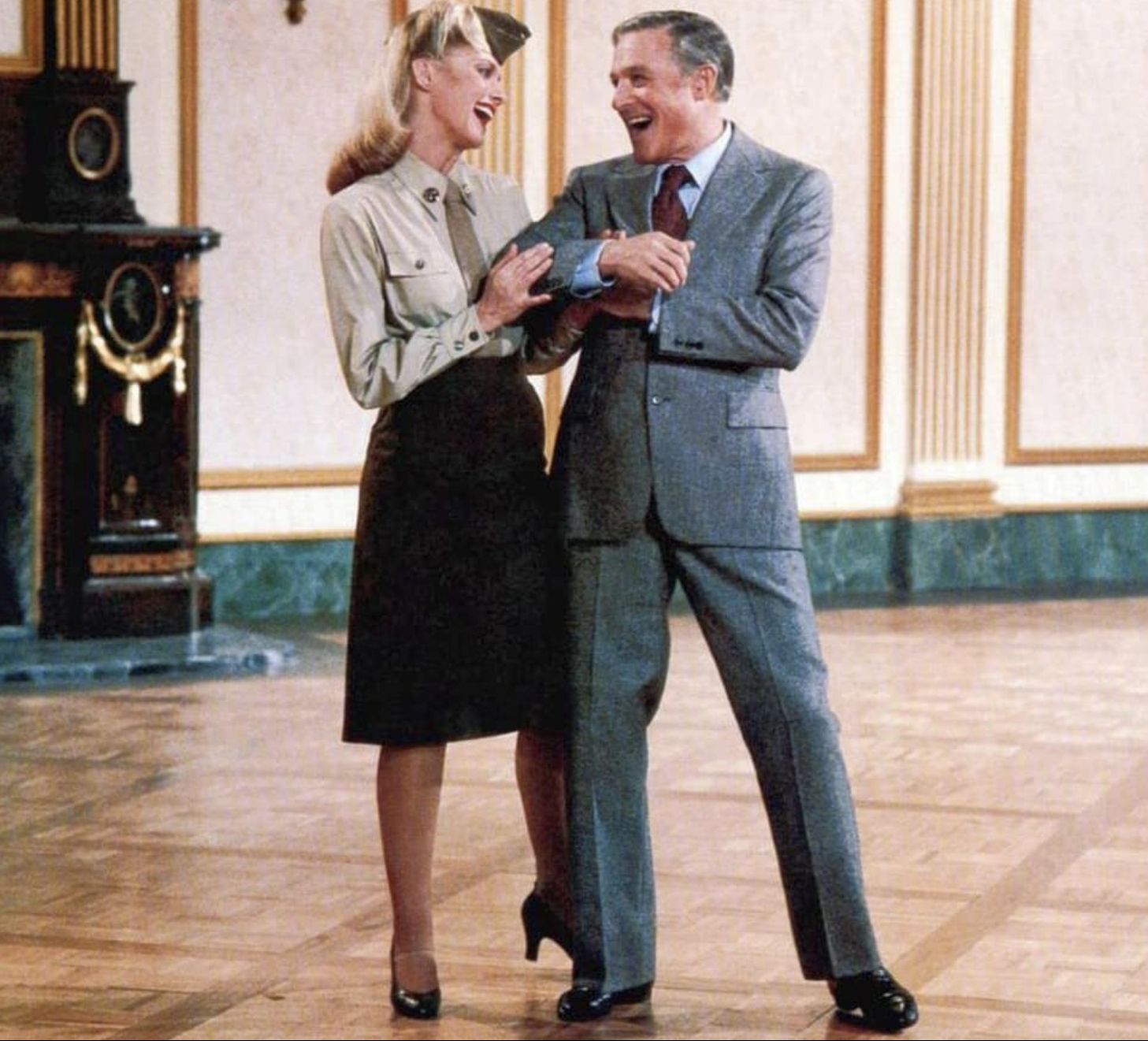 If Xanadu has a saving grace, it’s Gene Kelly. Thanks to his work in timeless classic musicals like Singin’ in the Rain, An American in Paris and On the Town, Kelly is a true legend, and Xanadu proved that, even aged 70, he had not lost any of his skill or charisma. Quite why he agreed to be in the film is another matter entirely; for better or worse, it proved to be the end of his career.

Though he sometimes appeared as himself in projects such as That’s Dancing and That’s Entertainment, Danny McGuire was the last character he ever played on film. How odd that Kelly would choose such an 80s cheese-fest to be his final contribution to cinema, but how sweet that he got to end his film career reprising a character that he had first played all the way back in the early 40s. 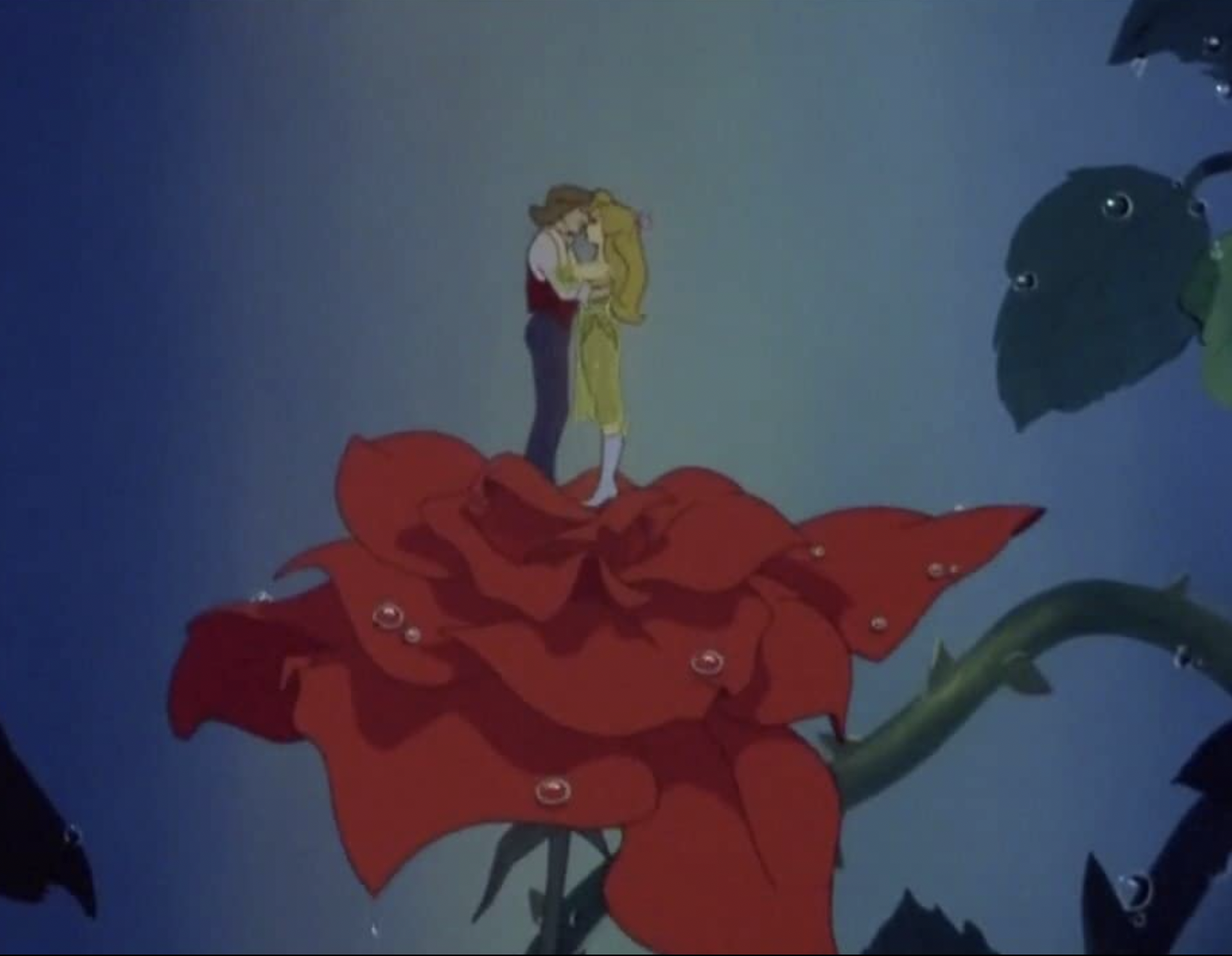 Xanadu throws in almost every extra element you can think of to make the film feel truly dream-like and surreal. As if it wasn’t bizarre enough with the musical number where the 40s and the 80s combine by locking together two segments of a moving stage platform, or the beautiful women transforming into glowing orbs and lighting up the Hollywood sign, we also have an animated sequence.

The sequence was drawn by the legendary Don Bluth, the former Disney animator who went to make The Secret of NIMH, AnAmerican Tail, and The Land Before Time, amongst other animated hits. The suitably bonkers sequence sees Newton-John’s Kira and Michael Beck’s Sonny transform from Thumbelina-sized versions of themselves, to birds, to brightly-coloured fish with eyeliner and pouty lips.

It was adapted into a Marvel comic 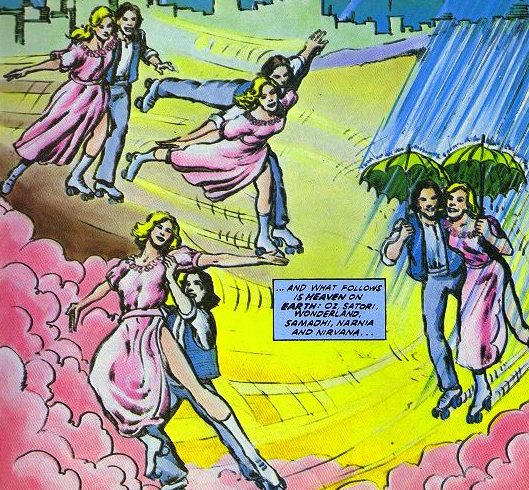 Xanadu features a lot of spandex, a buff young hero who confronts a jealous god, and an elderly mentor. In other words, you could argue that Xanadu has a lot in common with a superhero movie. Maybe that’s why Marvel Comics decided to adapt Xanadu into one of their Marvel Comics Super Special editions.

Marvel’s adaptation of Xanadu was the 17th issue in the 41-issue run of comics, and pretty much retold the movie. Only one change was made, and that was making it far more obvious that Sonny painted the mural of the muses through which Kira comes to life. Other films and TV shows adapted in the Marvel Super Special series include Conan the Barbarian, Close Encounters of the Third Kind, and Battlestar Galactica.

The soundtrack was done by Electric Light Orchestra 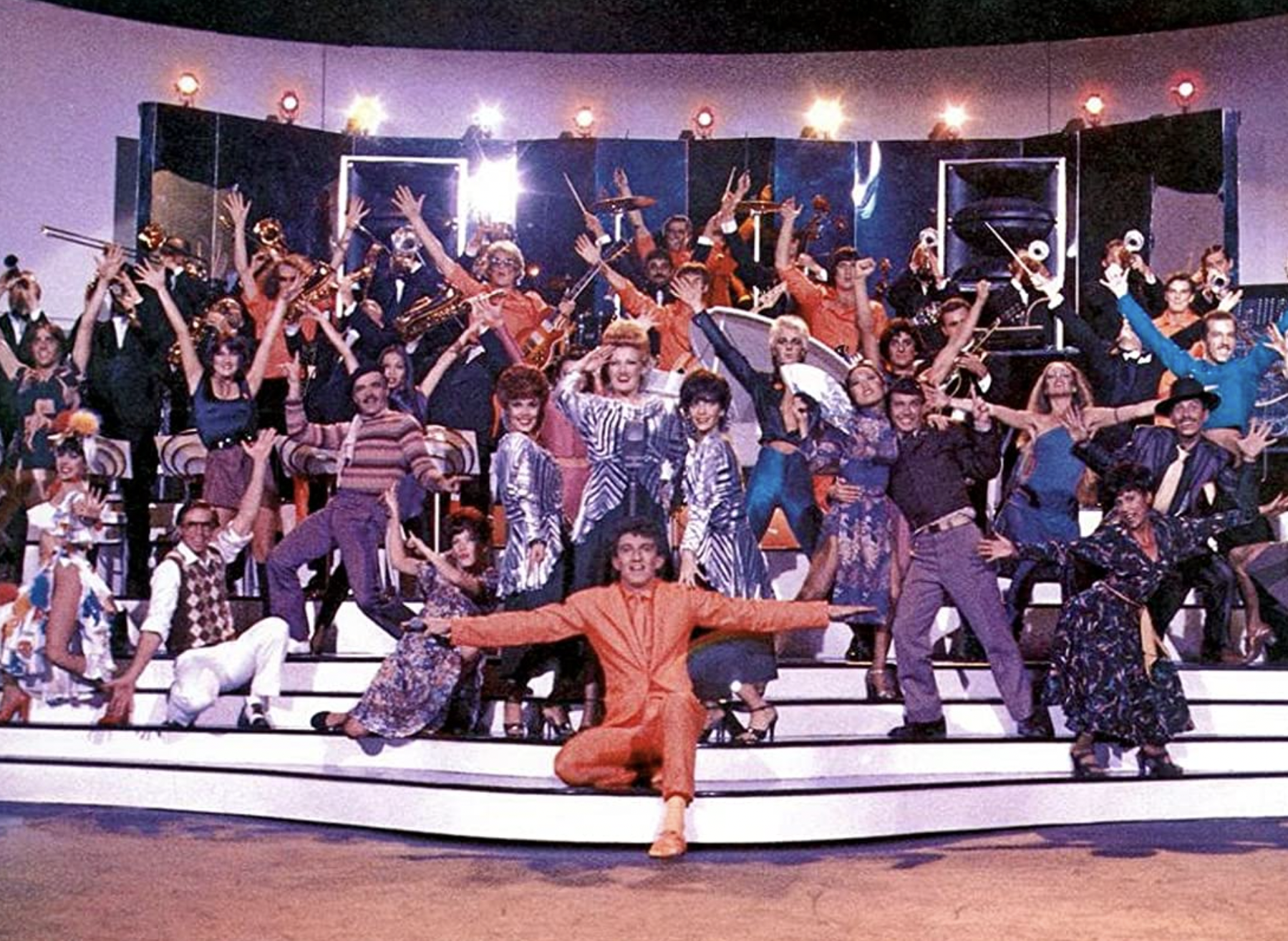 Usually, in a movie musical, all the songs are sung by the characters in the film, but this isn’t entirely the case in Xanadu. While some of the songs are performed by Olivia Newton-John from Kira’s perspective, a lot of them are played over the film without being within the context of the story, the way songs are typically used in a conventional film.

Most of the songs not sung by Newton-John or Gene Kelly are performed by British rock band Electric Light Orchestra. The collaboration obviously worked, as the Xanadu title track managed to reach number one in the UK singles chart, but it’s sonically odd to constantly jump between Olivia Newton-John’s bubbly pop and the layered guitars of ELO.