Why Gary Oldman Was The Definitive Dracula

When a literary character officially holds the Guinness world record for most filmed appearances, any new actor approaching the role has to be prepared to bring something special to the table. Gary Oldman, for one, had some big shoes to fill on being cast in the lead of Bram Stoker’s Dracula, most notably those of horror film legends Bela Lugosi and Christopher Lee.

With Godfather filmmaker Francis Ford Coppola directing a world-class cast including Winona Ryder and Anthony Hopkins, the 1992 Dracula proved to be one of the finest screen adaptations of the classic novel. As for Oldman’s performance as the Count himself? It remains one of the most distinctive and powerful takes on the character, and – in the hands of Coppola – in many ways the closest to what author Bram Stoker envisaged. 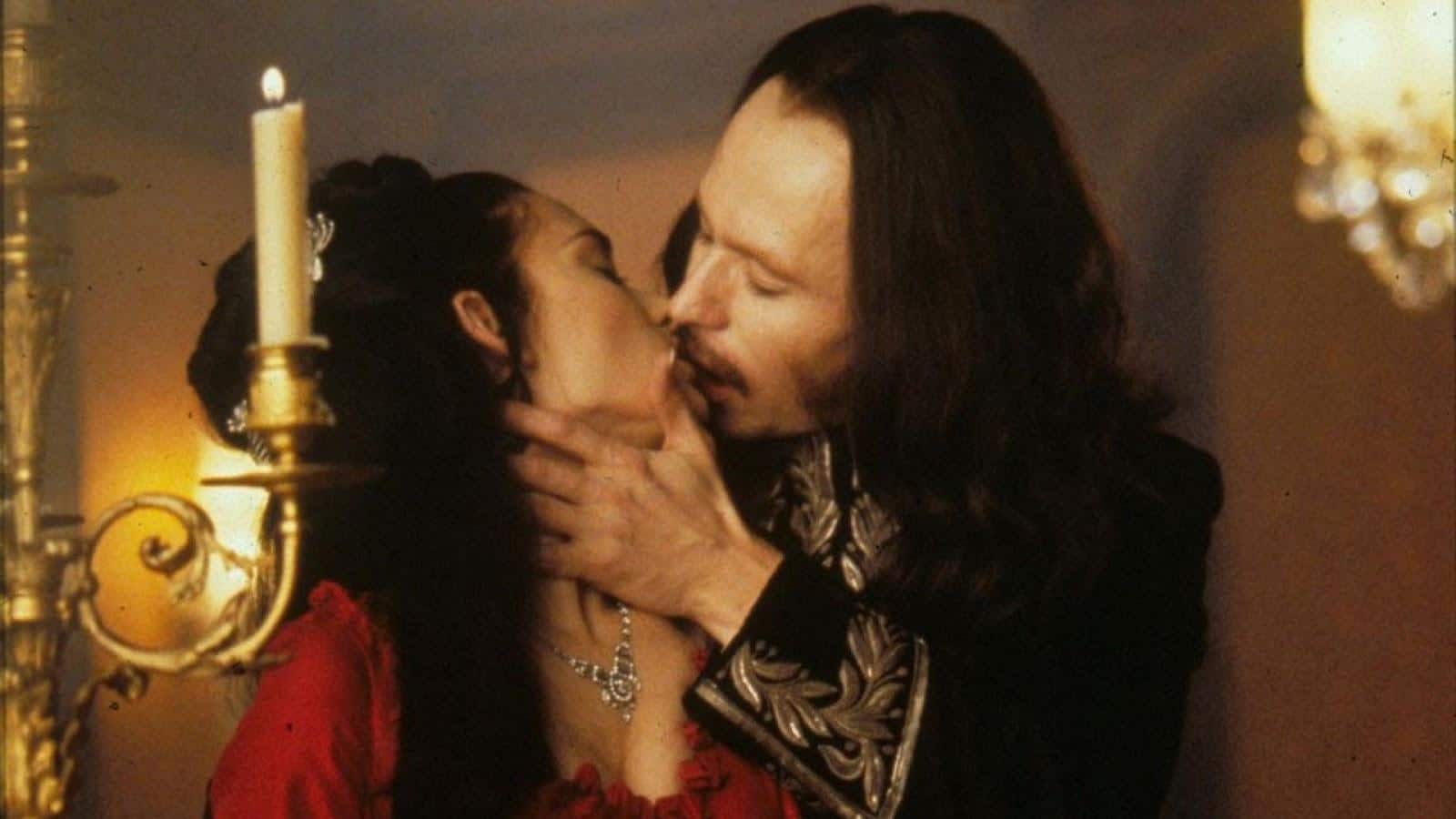 Bram Stoker’s Dracula was born out of an earlier near-miss between Coppola and Ryder. The actress had been set to appear in The Godfather Part III, but she dropped out due to nervous exhaustion. Later, keen to make another attempt at collaborating, Ryder showed Coppola a script she was excited about: a new adaptation of Dracula by screenwriter James V Hart, one unusually faithful to Bram Stoker’s original 1897 novel.

Coppola had loved Stoker’s novel since childhood, and saw the potential for a great feature film in Hart’s script. Ryder was immediately cast as Mina Harker, and for the title role an impressive wish list of contenders was assembled, which included Daniel Day-Lewis, Andy Garcia, Gabriel Byrne – and Gary Oldman, the man who would ultimately win the part.

London-born Oldman was 33 at the time, and he had already built up an impressive body of screen work. His performances in the likes of Sid and Nancy, The Firm and JFK demonstrated a knack for conveying raw emotion with a visceral, threatening quality, making Oldman a bold choice to play arguably the most iconic bogeyman in popular culture. 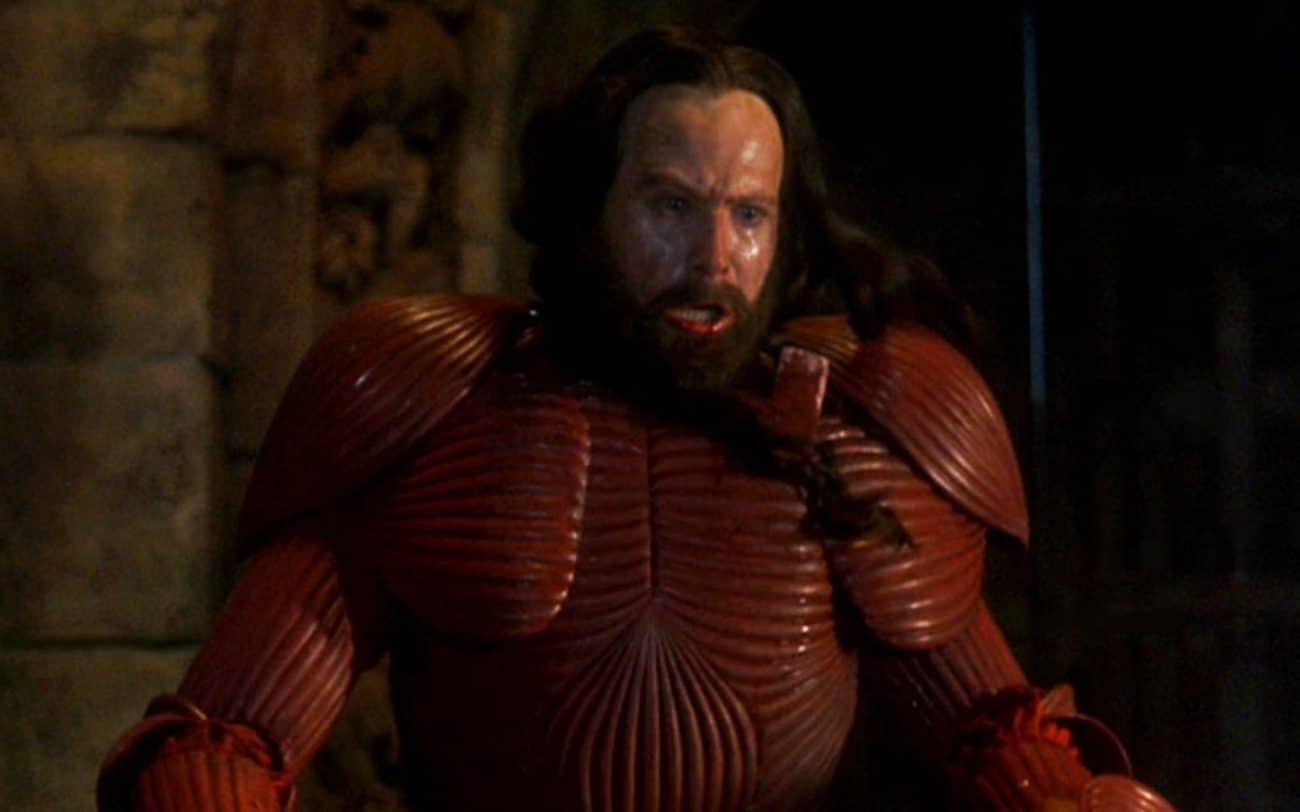 The prologue scene of Coppola’s film makes it clear just how distinct this take on Dracula will be. Oldman first appears not as Count Dracula, but as the historical figure of Vlad the Impaler. (Not a feature of Bram Stoker’s novel, the real-life Vlad in part inspired the Count, so Coppola insisted on adding this prologue to incorporate “the historical background of Vlad Tepes” into his take on Dracula.)

Oldman’s Vlad first appears clad in red, crustacean-like armour, cursing God and pledging himself to darkness on discovering his wife Elisabeta (also portrayed by Winona Ryder) has committed suicide. Coppola’s Dracula is heightened, unbound, a vision Oldman was happy to embrace: “[Coppola] is this sort of God of the cinema who can, when pushed, lean toward the operatic. And you think, ‘Well, why not give him a good show?'” 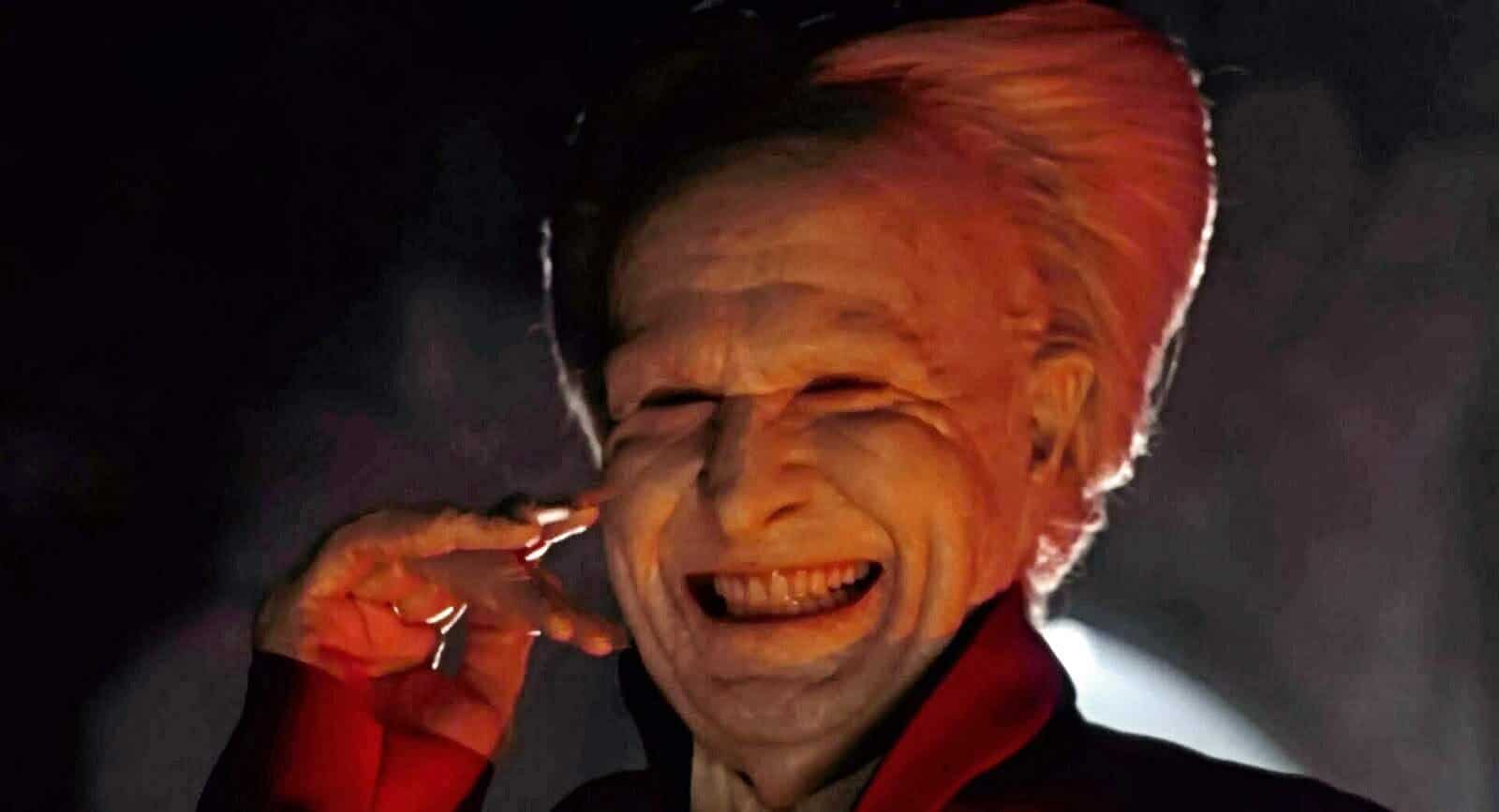 When we next meet the character in his Transylvanian home in 1897, this time officially known as Count Dracula, the man who answers the door to Keanu Reeves’ Jonathan Harker is not the dark-haired, darkly handsome Dracula we recognise from previous movies. Instead, Oldman appears as a decrepit old man in a red cloak with a bizarre white beehive hairdo, unrecognisable from the dashing young aristocrat we will meet later in London.

This, too, is a deviation from Stoker, who describes Dracula in the novel as “a tall old man, clean-shaven save for a long white moustache, and clad in black from head to foot.” Yet while the character’s appearance and turn of phrase may not stick rigidly to what Stoker wrote, Coppola’s opening scenes underline a couple of key elements retained from the original story.

First, drinking blood literally makes Dracula younger as well as sustains his immortality; secondly, the character’s personality can also metamorphose with his physical transformations. Containing a multitude of extreme personas, the stage is set for Oldman’s Dracula to be considerably wilder than other interpretations. 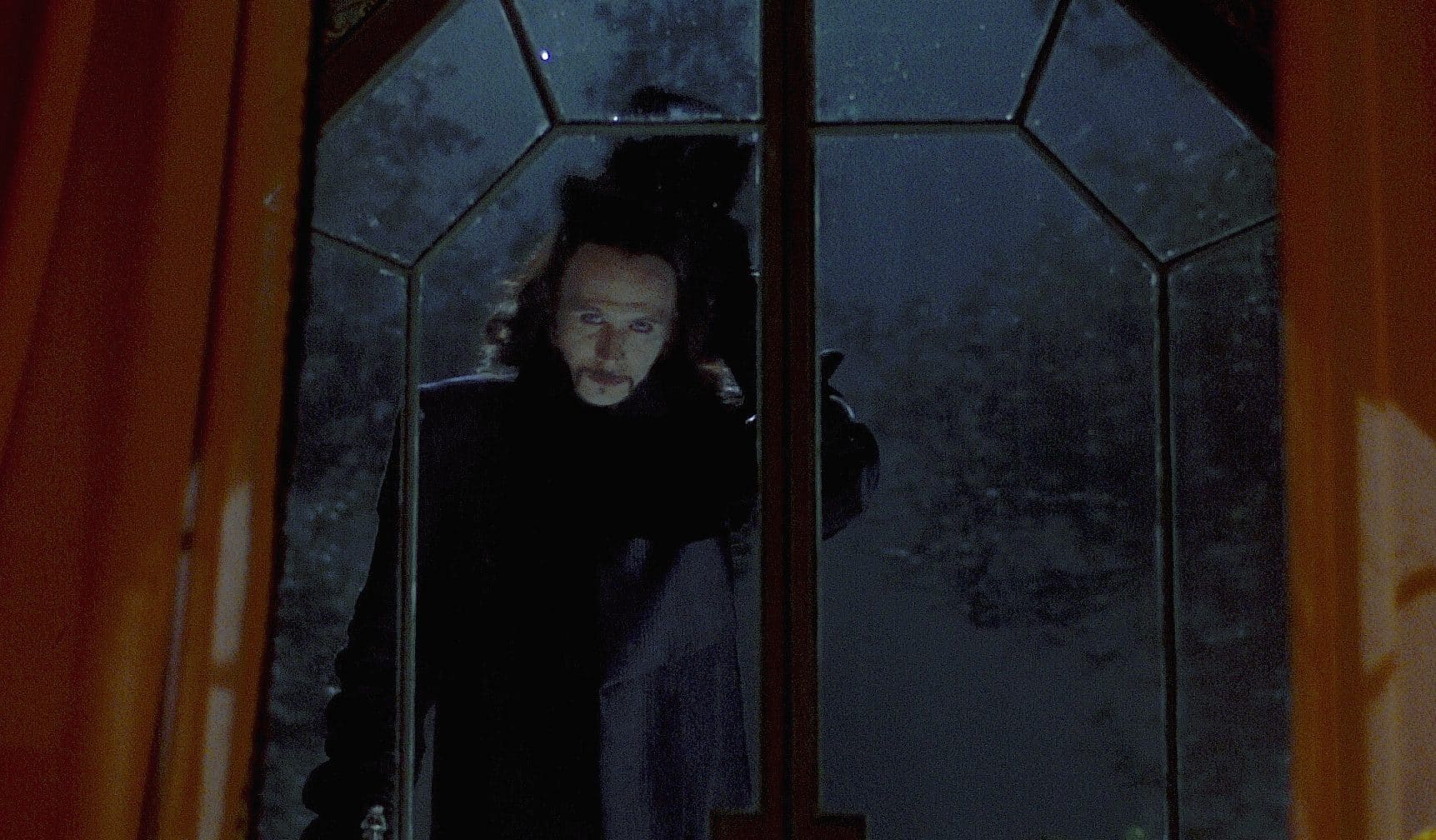 Although a feature of other Dracula adaptations, sexuality and romanticism are brought to the fore in Coppola’s Dracula, with the added plot thread that the Count believes Mina to be the reincarnation of Elisabeta (prompting him to seduce Mina, despite the fact that she is engaged to be married to Harker).

Like the prologue, the reincarnated romance angle is an invention of Coppola’s movie. Still, Stoker’s novel has long been noted for its underlying eroticism, so it was natural that this would come to the forefront with Oldman. Coppola admitted to having some doubts about the actor in this regard, remarking “he’s maybe not as handsome” as other contenders for the role, while also noting “all the women were saying how sexy Gary was. Winona was always saying he’s so exciting.” 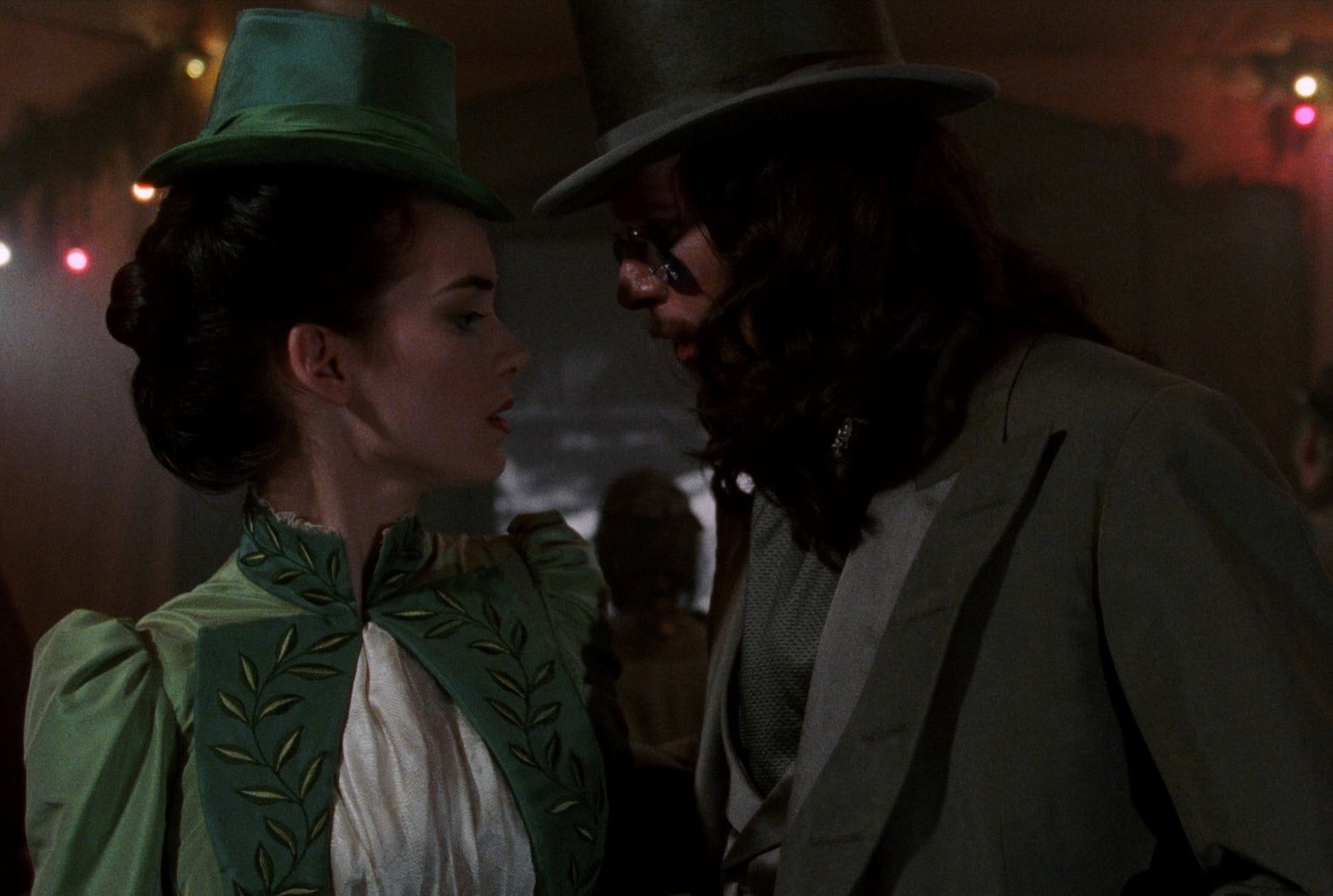 While Ryder may have initially been excited about working with Oldman, things changed once work was underway. For reasons which Coppola says “none of us were privy to,” Oldman and Ryder quickly fell out. Unusually intense, Oldman embraced the film’s overtly sensuous take on the material, perhaps a bit too enthusiastically at times (according to co-star Sadie Frost, “Gary would start talking, and… I can’t repeat any of it. He would say very hard-core things…He was being very, very sexual”).

Oldman has never claimed to be a method actor, but even so, it’s hard not to feel that his brooding, emotional take on Dracula was informed by the dark place he was in personally at the time. The actor’s short-lived marriage to Uma Thurman had fallen apart, and he was struggling with alcoholism. On certain days, Oldman’s temper got the better of him; a behind-the-scenes clip shows the actor slapping himself in the forehead whilst struggling to remember his lines.

Coppola deliberately only heightened Oldman’s intensity. To inform Dracula’s solitary nature, the director insisted that Oldman be isolated from the rest of the cast during production, while he also gifted the actor with a coffin to ‘use’ (“I think [Coppola] wanted me to have sex in it”, Oldman claimed later). Anthony Hopkins has said that Oldman at one point almost became physically violent toward Coppola, such were the director’s methods. What made for an arduous shoot, though, ultimately resulted in a Dracula portrayal for the ages. 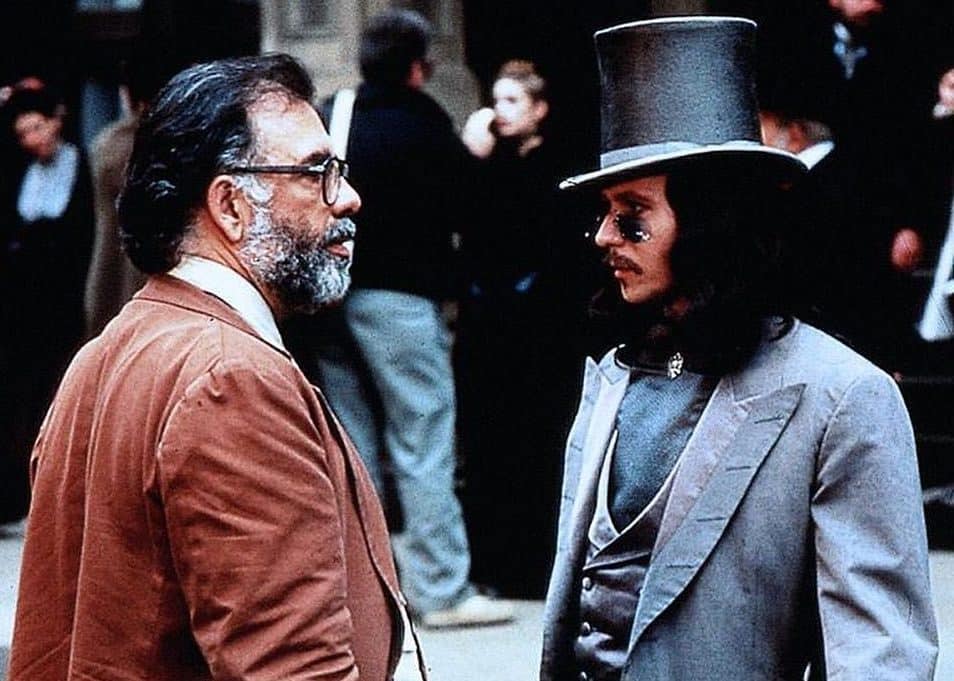 A potent blend of rage, sexuality and raw, unrestrained emotion is what makes Oldman’s Dracula so singular and so powerful, yet Oldman retains enough humanity to keep the performance from coming off as outright camp. So effective was Oldman in the role, it helped establish him as the premiere big screen bad guy of the era, a position which would be further cemented with roles in True Romance and Leon.

As for Oldman’s war with Winona Ryder: like Jennifer Grey and Patrick Swayze in Dirty Dancing, or Kim Basinger and Mickey Rourke in 9½ Weeks, Oldman and Ryder became one of many famous actor pairings whose feud off-camera translated to great chemistry on the screen. 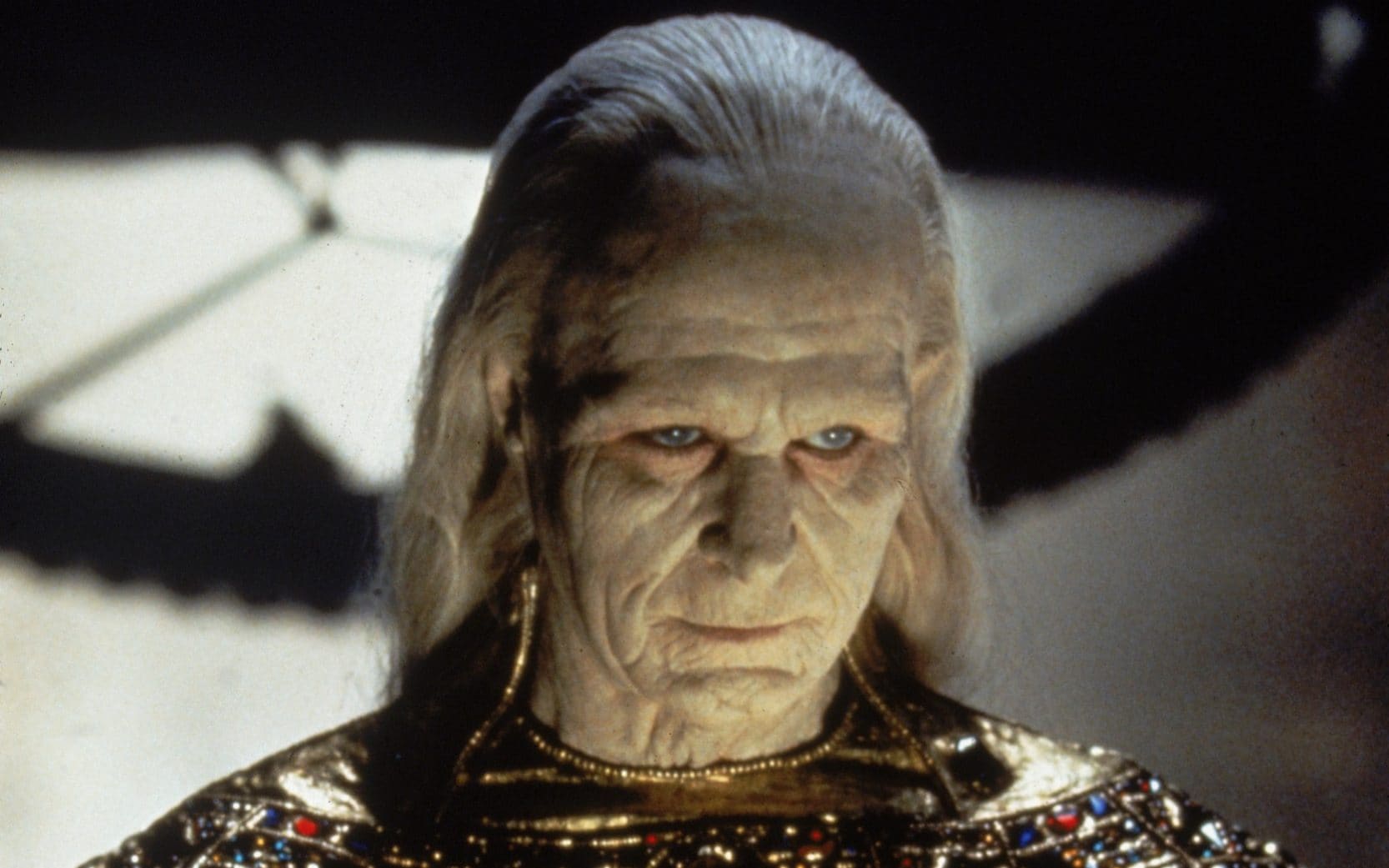 Bram Stoker’s Dracula proved to be Francis Ford Coppola’s last real hit as director, a $216 million blockbuster that would go on to win three Oscars the following year. Since hitting screens in November 1992, the film has thrilled viewers with its beautiful visuals, unique use of practical effects, stirring soundtrack and bold direction – and of course, the performance by Oldman in the title role.

As of 2015, Guinness listed Dracula’s screen appearances at 538, and there have been more since then (notably the 2020 TV series starring Claes Bang). Other big name actors to play the Count after Oldman include Gerard Butler, Richard Roxburgh, Jonathan Rhys Meyers and Luke Evans. It’s fair to say, however, that no one since has portrayed the character so powerfully, so indelibly and with such unbridled passion as Gary Oldman.