Arnold Schwarzenegger Was Too Buff to Play RoboCop

RoboCop holds special status among the action classics of the 1980s. A deft mix of satire and propulsive action, the sci-fi crime thriller sees humble Detroit police officer Alex Murphy gunned down in the line of duty, only to be reborn as ‘the future of law enforcement’: RoboCop.

Peter Weller, the method actor known previously for Buckaroo Banzai and Shoot the Moon, would go on to make the cyborg lawman his own. The original plan, however, was to have the character played by a perhaps more obvious choice: none other than Terminator star Arnold Schwarzenegger.

Schwarzenegger was director Paul Verhoeven’s first choice to play RoboCop, and the Austrian actor wanted the role. The reason why Schwarzenegger doesn’t appear in RoboCop is a practical one: in the end, the former bodybuilder lost the part because he was simply too muscular to wear the suit. 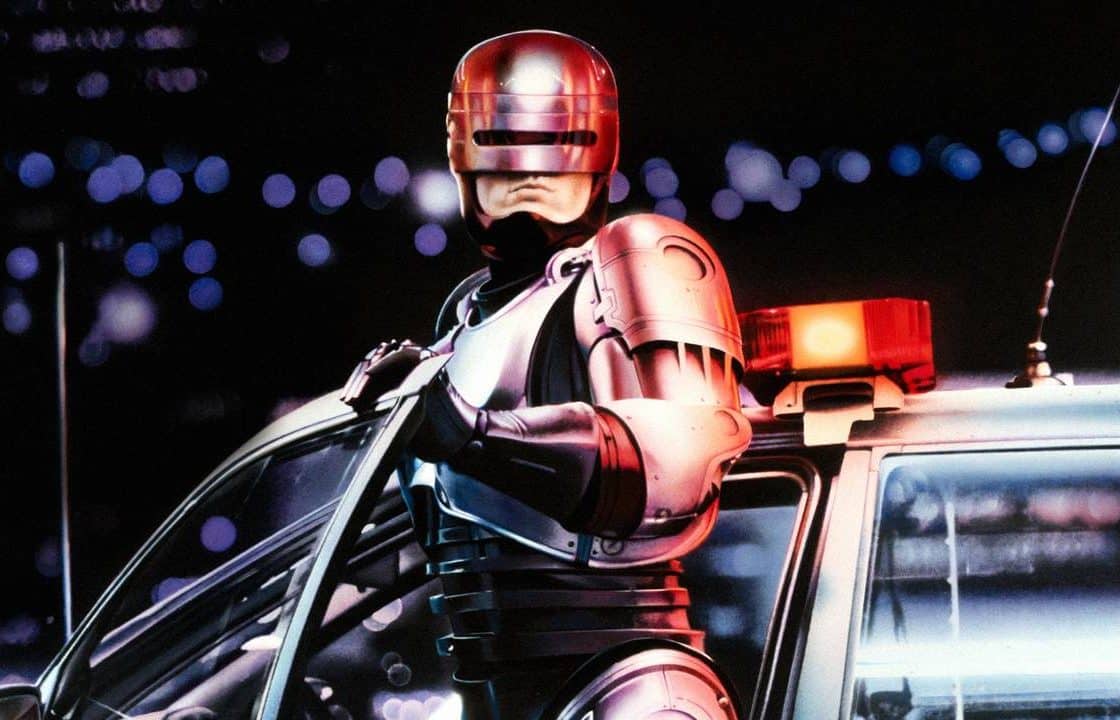 RoboCop was the brainchild of screenwriter duo Edward Neumeier and Michael Miner. Although a lot of studio executives thought the title sounded childish and silly, the screenplay impressed most people who read it – including Mike Medavoy, co-founder of Orion Pictures.

Founded in 1978, Orion Pictures was an independent production company and distributor who came to be considered a ‘mini-studio’ in the 80s. One of Orion’s biggest hits came in 1984, in the imposing form of The Terminator. 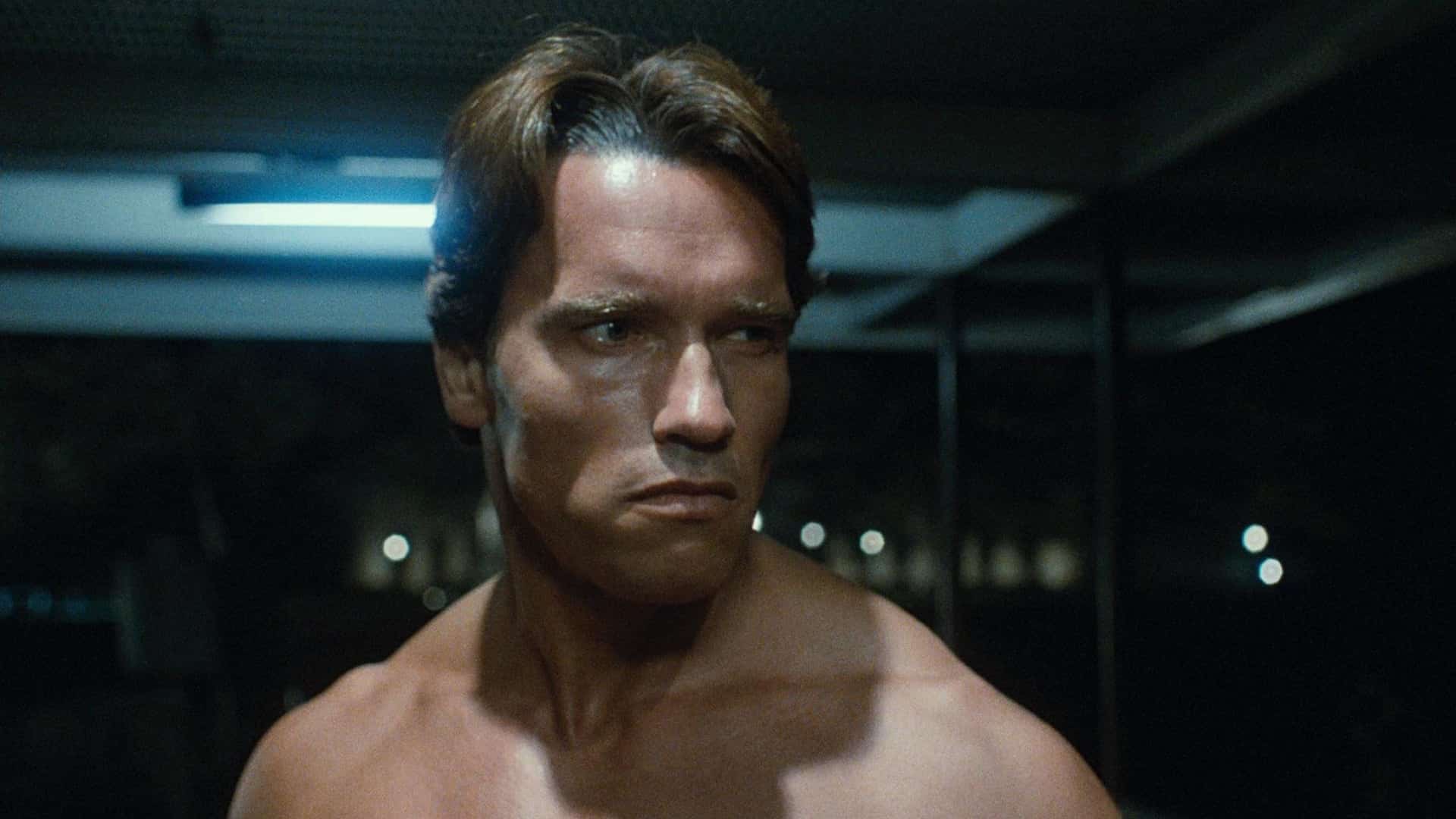 Writer-director James Cameron’s breakthrough movie proved to be one of the most celebrated sci-fi action films of the decade, and helped make a true movie star out of the actor in the title role: former champion bodybuilder Arnold Schwarzenegger.

Schwarzenegger had already been acting for some time before The Terminator. Landing his debut role in 1970 B-movie Hercules in New York, Schwarzenegger was named Best New Star at the Golden Globes for his supporting turn in 1976’s Stay Hungry. 1982’s Conan the Barbarian gave him his first major lead, but his career didn’t really skyrocket until he donned the leather jacket and black sunglasses and told the cop manning the front desk, “I’ll be back.” 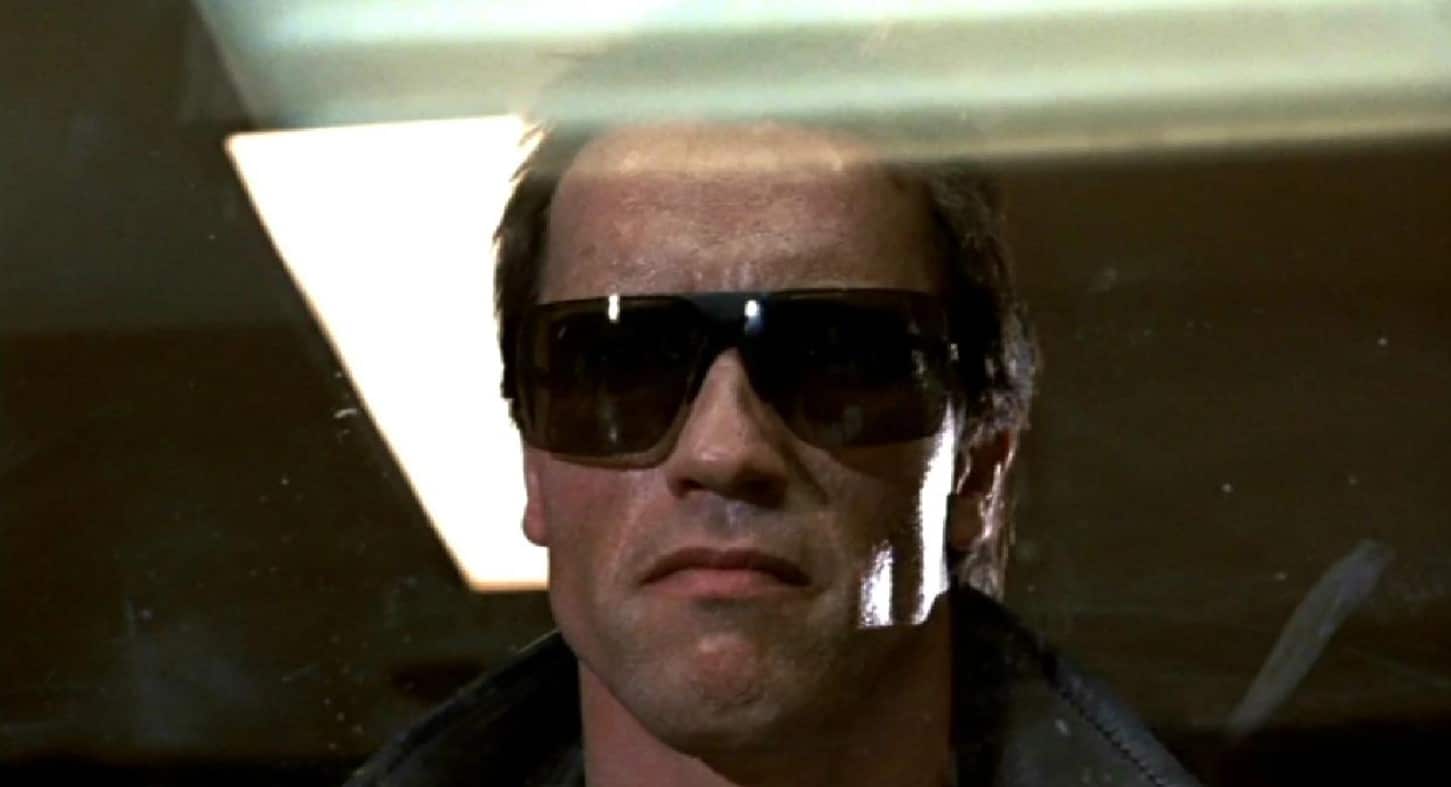 After the success of The Terminator, ‘Arnie’ movies became near enough a subgenre in their own right, with the leading man’s unique physicality and deadpan line delivery taking action movies Commando and Raw Deal to another level.

As he’d made his name playing a character who was half-man half-machine, it only made sense that Schwarzenegger was among the first actors considered for RoboCop. The top brass at Orion Pictures were keen to lure back the bankable star, and by all accounts the star himself was eager to do it.

As co-writer Mike Miner reflects in Netflix’s The Movies That Made Us, “Schwarzenegger wanted to be RoboCop. He and Mike Medavoy had become close friends at Orion Pictures, because The Terminator was an Orion picture.” 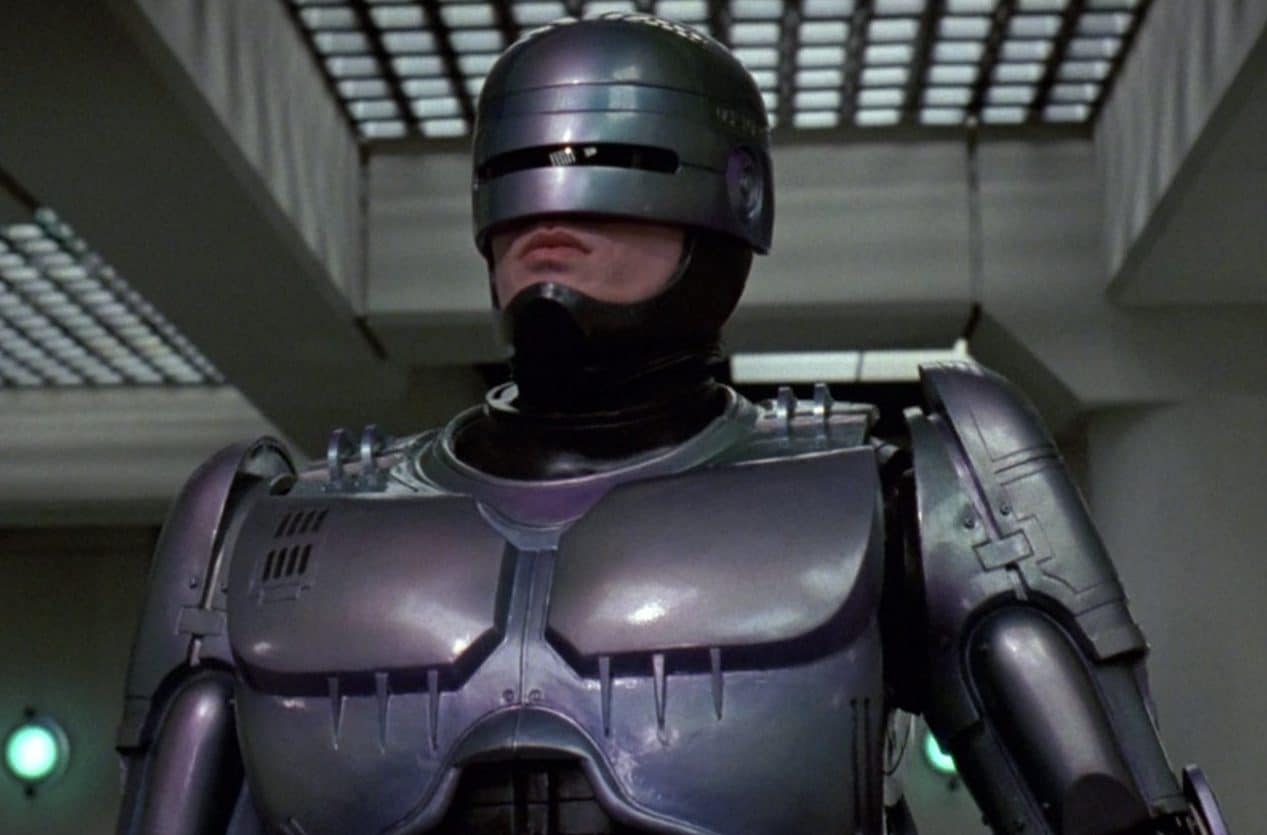 Work had already begun on designing the suit that the RoboCop actor would wear, with special makeup effects artist Rob Bottin (The Thing, Legend) hired to take the job on. Naturally it had to look sleek and hi-tech, but it also had to look heavy-duty and hard-wearing. Initial designs looked promising – but once they got word that Schwarzenegger was up for the role, it soon became apparent there could be an issue.

Records state that, at the height of his bodybuilding career, the Austrian Oak weighed between 235 and 260 pounds and stood 6’2″ tall (although some claim his height was closer to 5’11”). Even though he had slimmed down somewhat as a full-time actor, Schwarzenegger was still considerably more muscular than the vast majority of actors at the time, and this was a problem when it came to RoboCop. 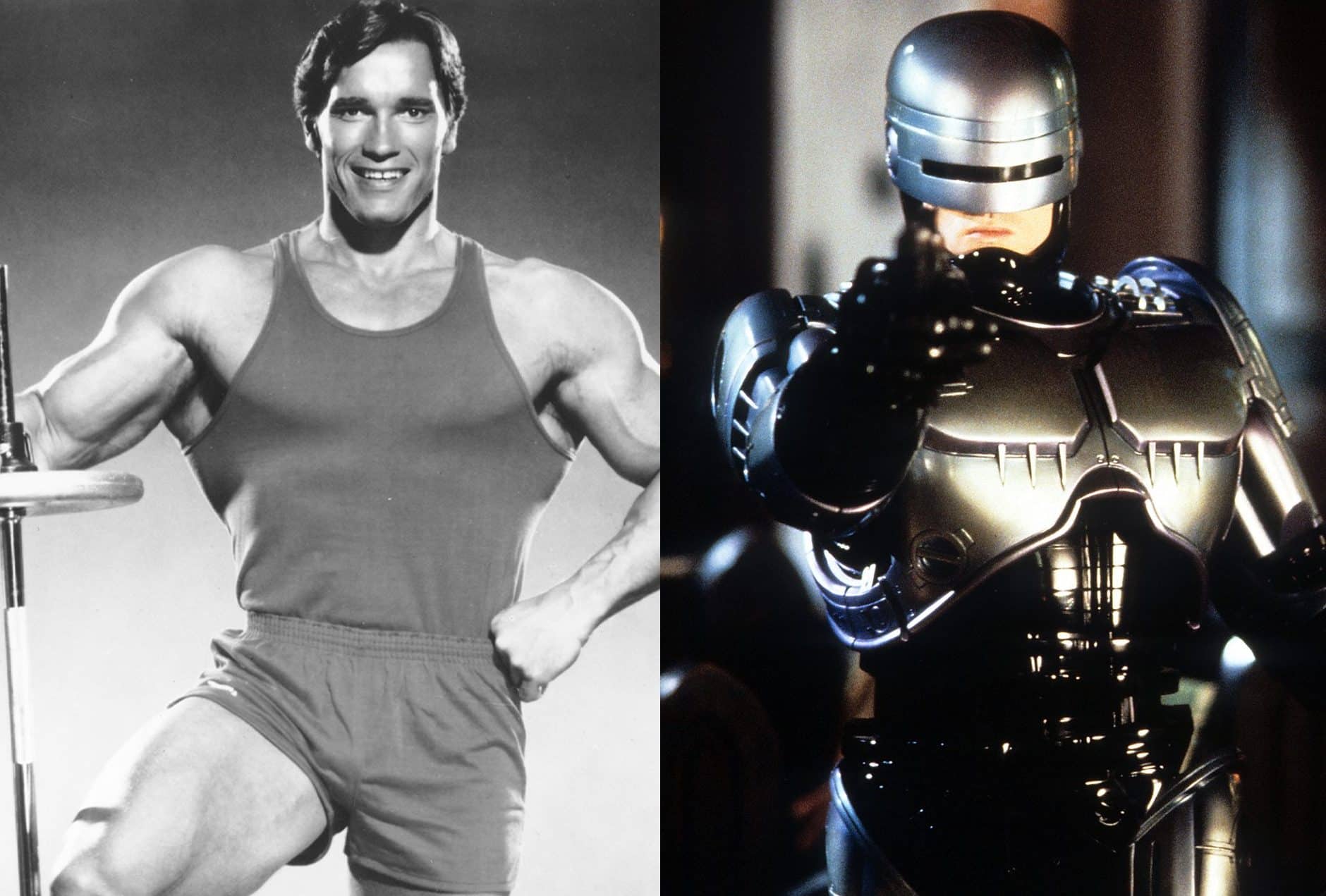 Mike Miner reflects that redesigns of the RoboCop suit to fit Schwarzenegger “turned out looking like the Michelin Man! It was too exaggerated, too big. If you’re going to have something this large, there’s no drama. This thing is indestructible, it’s unstoppable. They thought ‘no, this is not gonna work.'”

Director Paul Verhoeven has similar recollections: “We considered casting Arnold Schwarzenegger but thought he’d be too enormous once he got the costume on. We realised we needed to have somebody slim so we could build a really powerful robo-suit.”

Rutger Hauer, Michael Ironside, Tom Berenger, Keith Carradine, Armand Assante and James Remar were among the other actors considered, and even Peter Fonda reportedly expressed interest in playing the role. 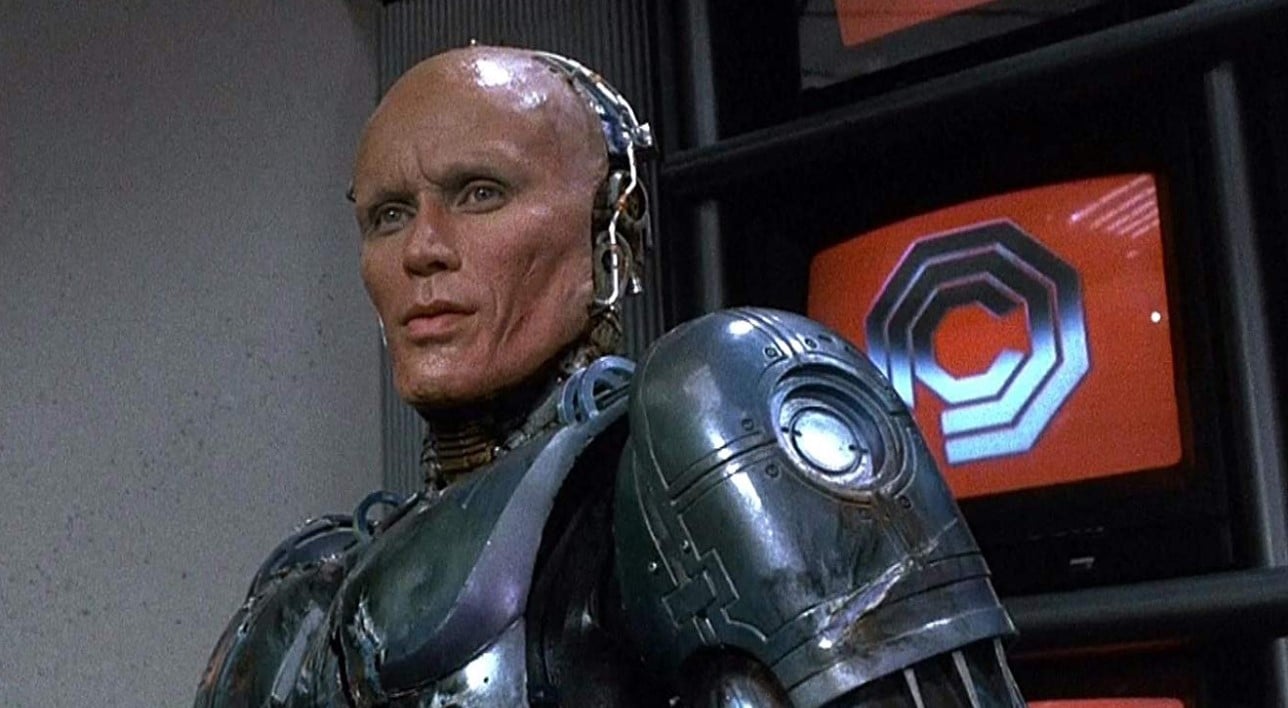 In the end, of course, the filmmakers picked Peter Weller. The actor’s slim build made him perfect, and so did his jawline: Verhoeven reflects, “It was important he had a good chin… it had to be really pronounced. Of course, acting was important, but I can’t deny Peter Weller’s chin was one of the main reasons he got the part.”

In the end, RoboCop proved a hit even without the star power of Schwarzenegger. It was greeted with enthusiasm from critics and audiences, and kickstarted a franchise that included two sequels and two TV shows, one animated and one live-action (none of which are held in anything like the same regard as the original). 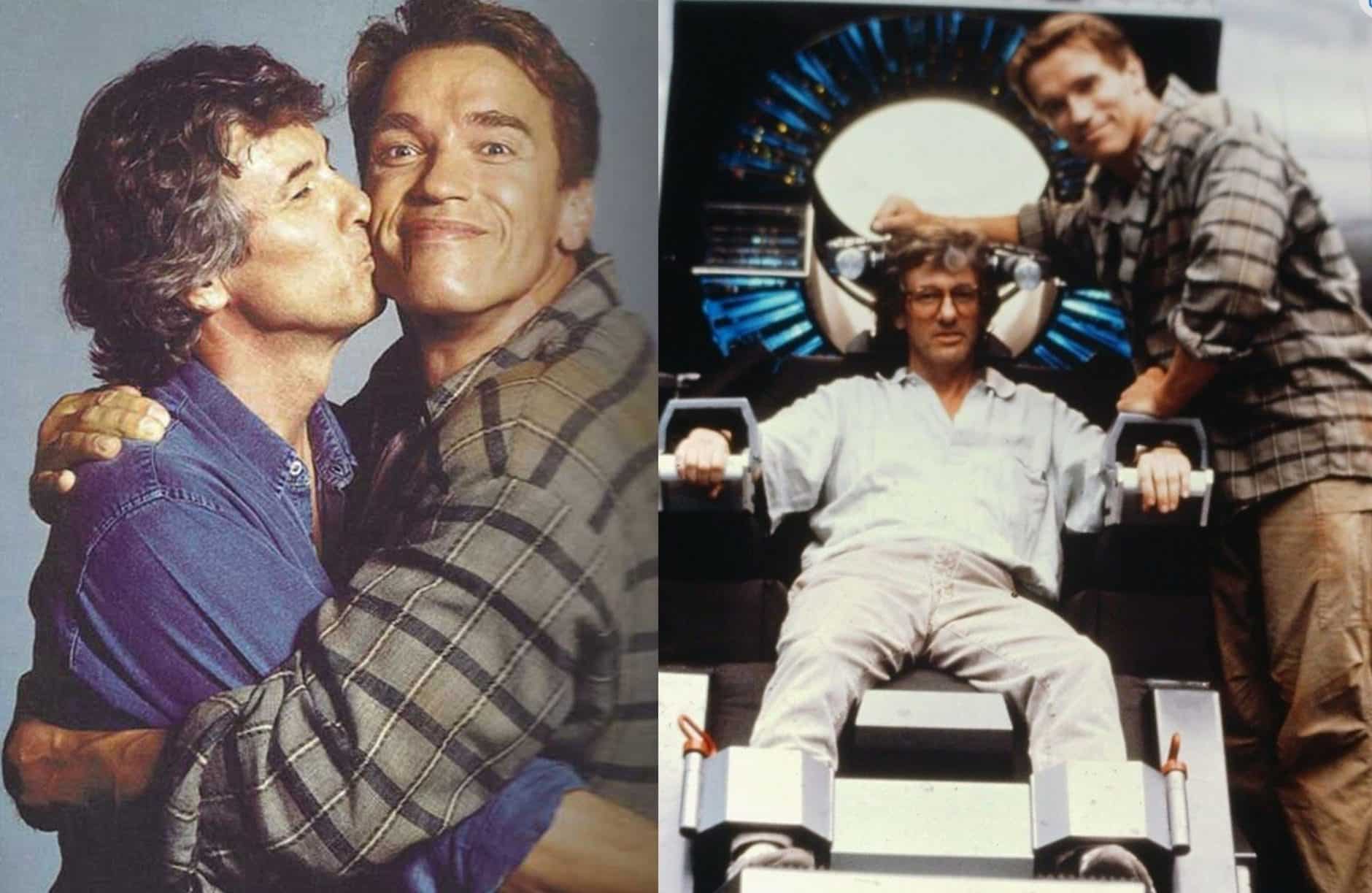 While Schwarzenegger missed out on one sci-fi action masterpiece, 1987 saw him appear in two more firm favourites: Predator and The Running Man. The RoboCop experience also introduced the actor to Paul Verhoeven. The two became friends, and soon thereafter collaborated on what would be another much-loved sci-fi action smash, 1990’s Total Recall.

Several years later, Schwarzenegger and Verhoeven came very close to reuniting on historical epic Crusade, but unfortunately this ambitious project wound up being abandoned over budget issues. More recently, Verhoeven indicated he’d been keen to reunite with Schwarzenegger on the long in-development third Conan movie, but this has failed to gain momentum.

RoboCop, however, was revived in the 2014 remake, which was met with a tepid response. A direct sequel to the original, RoboCop Returns, has been in development since 2020, but sadly there’s little indication that the project has managed to get off the ground just yet.