While We Were Reading Big! And Smash Hits, What Were American Kids Reading? 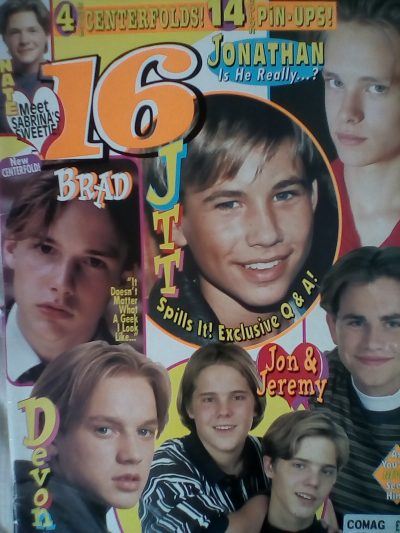 Whilst here in Britain we were spoilt with magazines such as Big! and Smash Hits. Our friends across the pond were equally as spoilt with a magazine called, 16!

16 was a fan magazine, though a teen magazine, it did focus more on pre-teen girls, 9-12 age group, as their primary reader, and it featured the stars they were into.

It was a top selling magazine for many years. Based in New York, USA. The first issue was in May 1957, with Elvis on the cover!

Lets venture into the pages of 16 from a 1997 issue, and see who were the then Hollywood pin ups! 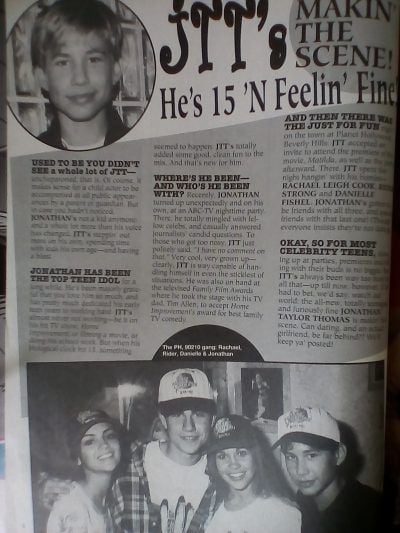 Johnathan Taylor Thomas was hot property, the girls in the States could’nt get enough of him. In the mid 90’s he was the number one heart throb, and regulary featured in 16.

He played Tim Allens son, in Home Improvement. For which he was best known for. 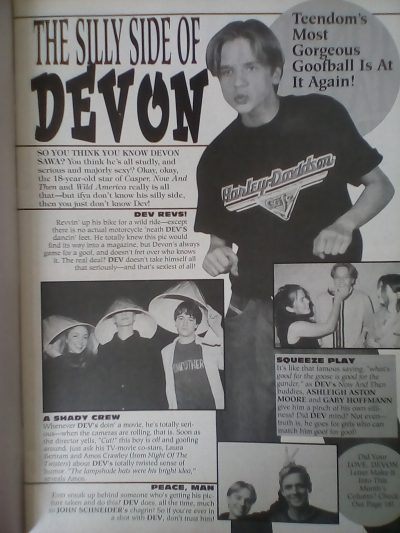 Following not so far behind Johnathan Taylor Thomas in the popularity stakes was Devon Sawa! They even starred in a film together, Wild America.
Devon also appeared in Now and Then, and Casper. 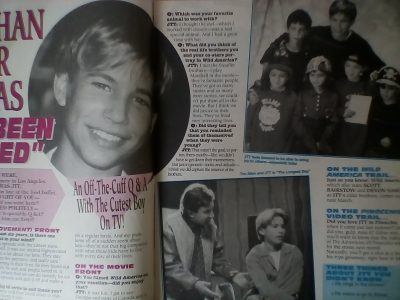 JTT again! Doing a question and answer interview, he talks about Home Improvement and another film he starred in, Pinocchio! 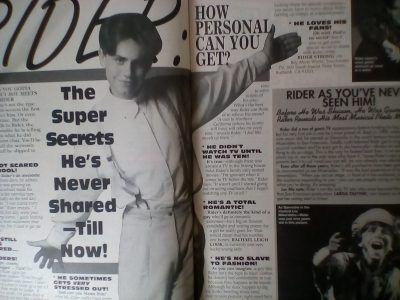 Rider Strong. Who was in the hit programme, Boy Meets World.
Here he shares some of his secrets!

He did’nt watch any TV until he was ten! He’s scared of spiders! Also back then he was dating actress, Rachael Leigh Cook.

When he was 9 years old, in 1989, he starred as Gavroche, in a San Francisco stage production of Les Miserables. 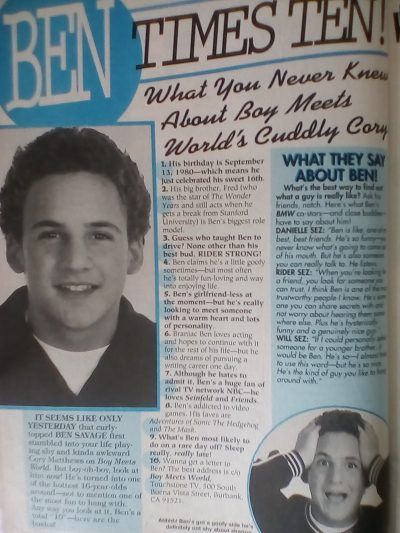 He had just turned sweet sixteen. He was driving too, taught by his Boy Meets World co-star, Rider Strong! 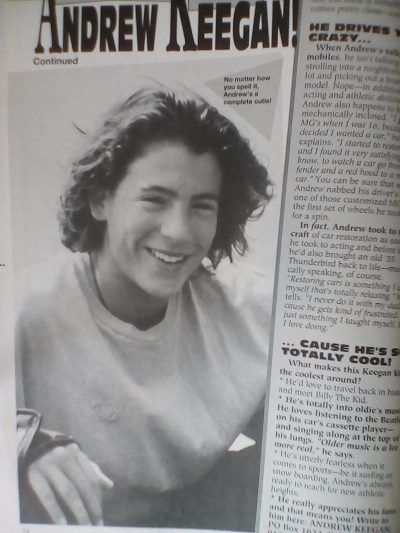 Actor Andrew Keegan, who was in TV’s Step By Step, and the blockbuster film, Independence Day.

If Andrew wasn’t on a set filming, he could usually be found at the beach. He’s one very keen surfer! 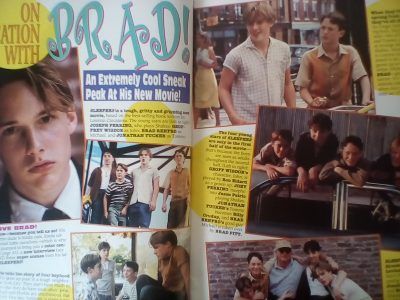 Brad Renfro. On set during the making of the film, Sleepers. Brad played the younger character of Brad Pitt. 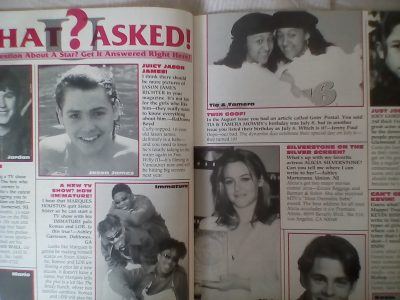 16 answer’s your questions on the favourite stars of the day!

One fan wants more pictures of Free Willy star, Jason James Ritcher! Another fan wants to know what Saved By The Bell‘s Mario Lopez is up to?! Another want’s an address to write to Alicia Silverstone! 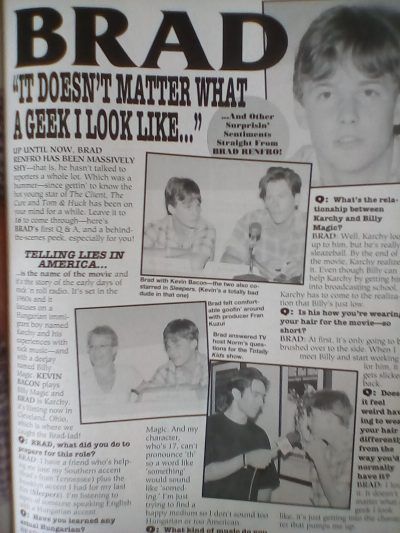 More Brad Renfro! He also was in The Client, The Cure, and Tom and Huck (with Johnathan Taylor Thomas!) He was a Southern boy, born in Tennessee. Who loved blues music. 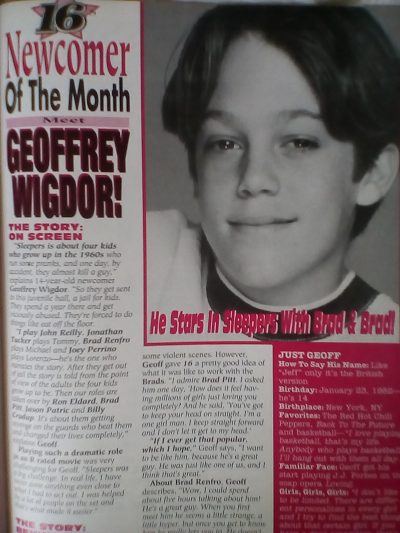 Every month 16 did a Newcomer of the Month feature. This month it was Geoffrey Wignor.

Geoffrey was in Sleepers, along with Brad Renfro. He first appeared on screen in the soap opera, Loving. 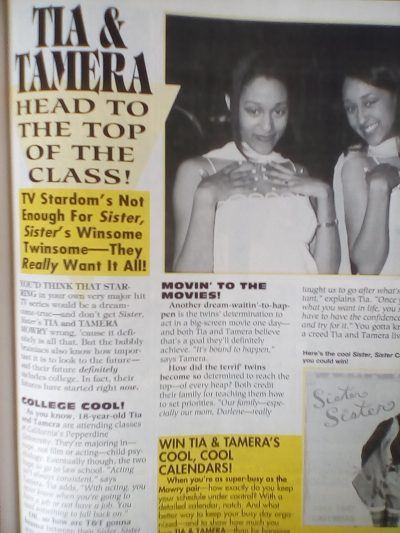 Tia and Tamera! Remember them? The real life twins had their own TV series, Sister Sister. Which was a huge hit! 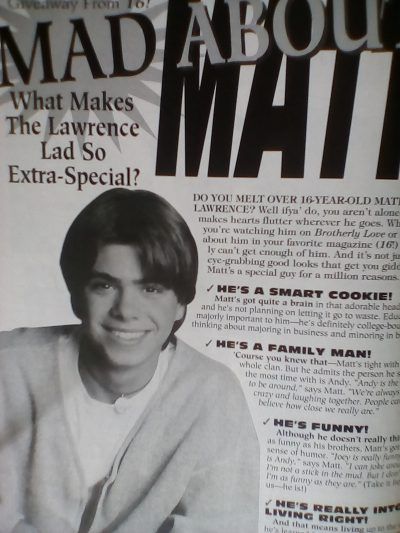 Matthew Lawrence, who had a Hollywood CV which would make any budding actor green with envy! 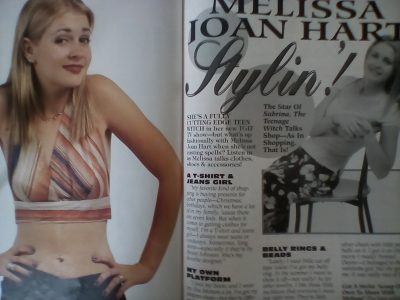 Melissa Joan Hart. From Clarissa Explaines it All, to Sabrina the Teenage Witch. Talks shopping!

She loves buying for other people, Christmas and birthday presents! She’s very fond of her Doc Martens! And she had recently had her belly button pierced! 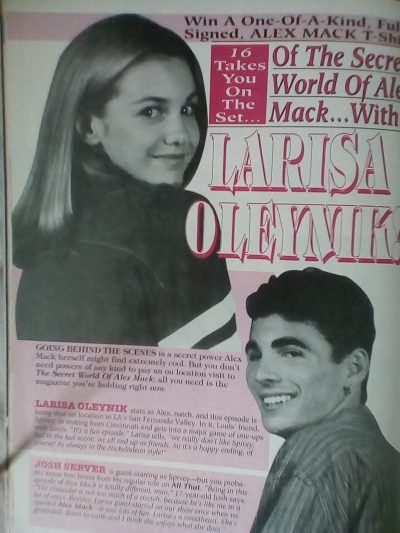 The Secret World of Alex Mack star Larisa Oleynik. On set with the star in Los Angeles. 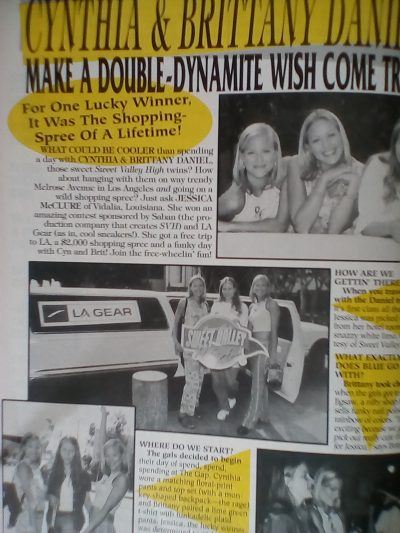 The twins take a fan, who had won a competition, shopping. They shop until they drop on Melrose Avenue!

The twins were also in The Basketball Diaries, with Leonardo Dicaprio. Playing very diifferent characters to their Sweet Valley High roles! 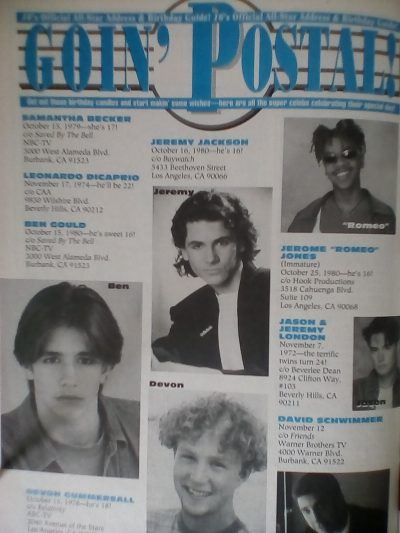 Yes it was still the days in which fans wrote to their favourite stars by post! Pen, paper, stamp! Ha ha! Each month 16 featured stars who’s birthdays were the following month!
So you could send them birthday wishes! 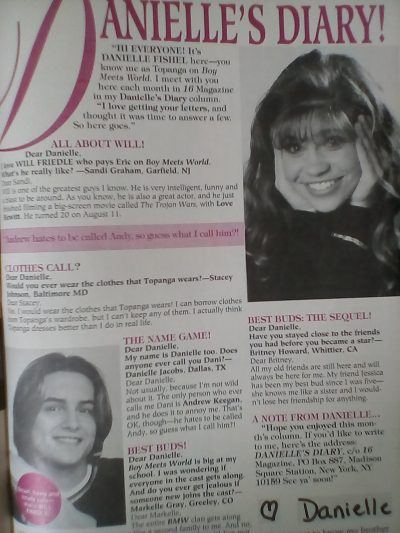 Last but by no means least, Boy Meets World’s Toganga, Danielle Fishel. Who had her very own column! She would answer all her fans letters! Plus show photo’s from parties and even pics of her at home!

16 magazine was fab! It was rare to find it in Britain! But if you could get your hands on a copy, it cost £1.95. Pretty cool for a monthly mag!