Rubik’s Cube: How A Hungarian ‘Beggar’ Invented One Of The Biggest Toys Ever

‘Rubik’s Cube: over 3 billion combinations, but just one solution.’ In 1980, this tagline launched what would become one of the most successful and iconic toys of all time, one that has sold over 450 million units since its creation. But just how did this Hungarian invention leave the Eastern Bloc in the 1970s and come to captivate the rest of the world? 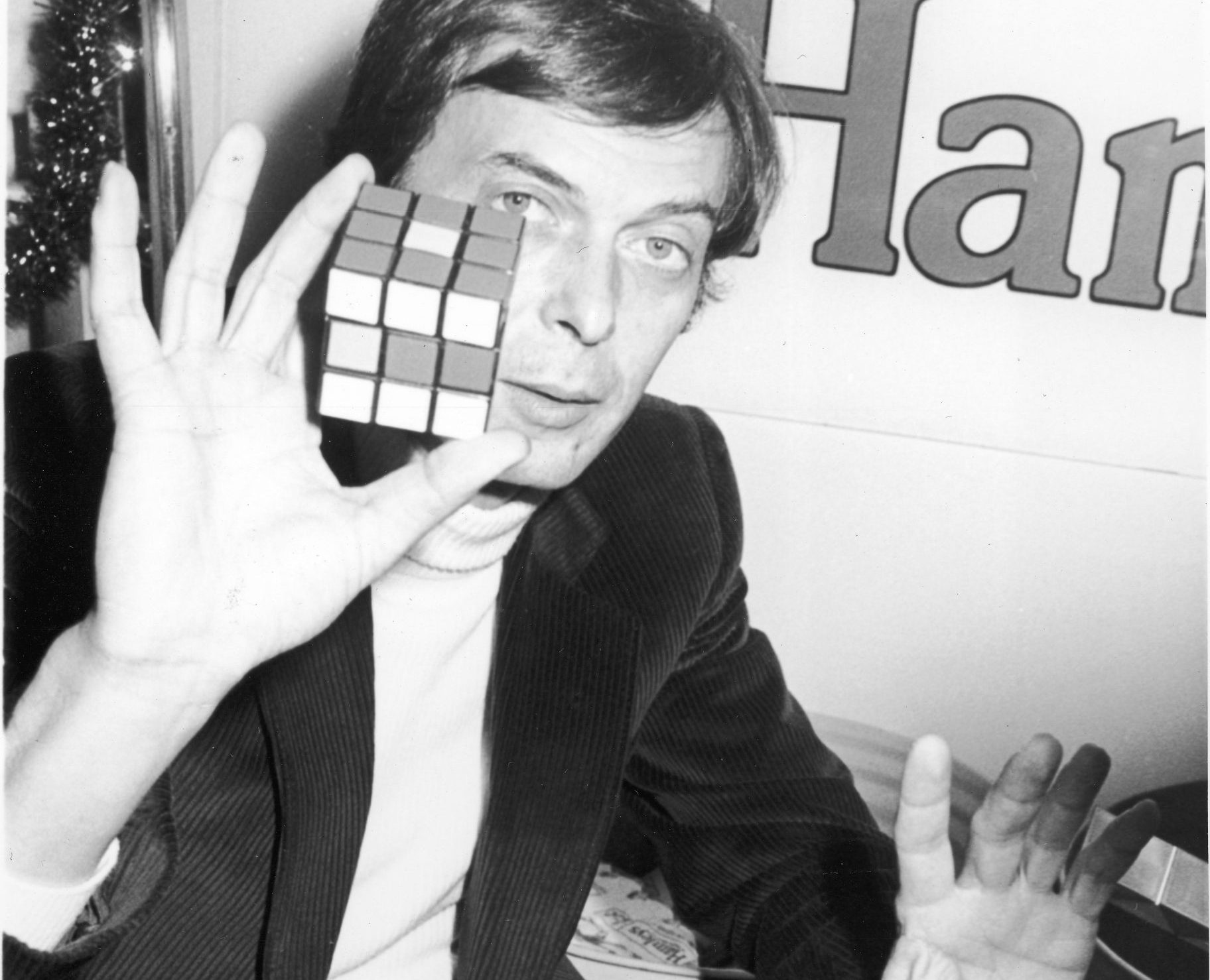 The son of a plane engineer and a poet, inventor Ernő Rubik was born in Budapest, Hungary in 1944. Inspired by his father’s profession, the young Rubik took an interest in mechanics and design, eventually going on to study sculpture and architecture at university.

Rubik became a professor of Design at Budapest’s Academy of Applied Arts in 1971. In his spare time, he indulged his biggest hobby: creating geometric models from wooden blocks.

Inspiration for the Cube first came along as Rubik was planning a lesson. “I was searching for a way to demonstrate 3D movement to my students and one day found myself staring into the River Danube, looking at how the water moved around the pebbles,” he has recalled. “This became the inspiration for the cube’s twisting mechanism.”

In the mid-1970s, at the age of 29, Rubik began working on what would become the Rubik’s Cube. “I experimented in my mother’s flat, using wood, rubber bands and paper clips to make a prototype,” he recalled.

“I needed some sort of coding to bring sense to the rotations of the cube, so I used the simplest and strongest solution: primary colours,” he added.

“Putting the stickers on the finished cube felt very emotional. I knew it was revolutionary. The moment I started twisting the sides, I could see it was a proper puzzle – but what I didn’t know was whether it could be solved.”

It took Erno Rubik one month to solve his own Cube – a feat that many struggle with to this day in the absence of instructions. He realised that, as well as an algebraic teaching tool, there was an incredible new toy resting in his hands.

It would take a while, though, for the world to be persuaded of the toy’s genius.

Rubik soon applied for a patent, entitling his new invention the Magic Cube. He developed a plastic model containing 26 miniature cubes and began selling it in Budapest’s toy shops from 1977.

But the turning point for the Cube was when Hungarian businessman Tibor Laczi discovered it. He was drinking coffee in a café when he noticed a waiter fiddling with one of Rubik’s models.

Laczi contacted Hungary’s state trading company Konsumex the next day, with a plan to introduce the Cube to the Western world. His first meeting with Rubik produced a very mixed impression, however.

“When Rubik first walked into the room I felt like giving him some money,” Laczi has since recalled.

”He looked like a beggar. He was terribly dressed, and he had a cheap Hungarian cigarette hanging out of his mouth. But I knew I had a genius on my hands. I told him we could sell millions.”

After an initial attempt to sell the Cube at a 1979 toy fair in Germany, Laczi and Rubik later teamed up with the British company Seven Towns. They debuted the rebranded Rubik’s Cube at toy fairs worldwide on 28th January 1980. It would soon take the West by storm.

One of the earliest fans of the Rubik’s Cube was Noel Edmonds, the British TV presenter who brought the toy onto his show Multi-Coloured Swapshop in 1980. Thanks to this publicity, the Cube started selling fast. In the early 80s, an estimated 200 million Rubik’s Cubes were sold and about 1 in 4 British households owned one.

Lars Petrus, who would become the fastest Swede to solve the Rubik’s Cube in 1981, has remembered how the sight and sound of the Cube were everywhere.

“Back in my university days, back in the crazy cube times, you could sit in a lecture hall with 100 people and hear 10 or 15 cubes being discreetly turned around the room,” he has said.

Few fans solved the Rubik’s Cube alone, with most relying on instructions. Books entitled Notes on Rubik’s ‘Magic Cube’, You Can Do the Cube and The Simple Solution to Rubik’s Cube sold millions of copies.

The Cube spawned countless spin-off products, including the Rubik’s board game, Clock and Snake puzzle. Even a cartoon show inspired by the toy aired on ABC Television: Rubik, The Amazing Cube. In Rubik’s home city of Budapest, the first ever Rubik’s Cube World Championships took place in 1982. Minh Thai from the USA was the victor, with a speed-cubing time of 22.95 seconds.

[The Rubik’s Cube is] a puzzle that’s moving like fast food right now,” the Washington Post declared in 1981. “It is this year’s Hoola Hoop or Bongo Board, a hot tub for the mind… If you’ve got it with you, it is maybe the only thing in the world that may make you wish that the line in the bank were longer.”

‘The Cube gives me hope’

Cube fever was not to last. Following the Cube’s wild popularity in the early 80s, in 1982 the New York Times declared the toy’s sales were slumping with the headline: “The Craze Ends”.

But the Cube has endured in the public consciousness. ‘Speedcubing’ records are still broken every year, with the World Cube Association managing competitions. A travelling interactive exhibit held from 2014 to 2019 took a 35-foot-tall Cube around the world, along with a diamond-encrusted model worth $2.5 million. In 2019, the robot Dactyl solved the Rubik’s Cube with a single hand.

A symbol of intellectual curiosity, the Rubik’s Cube has also been lauded for its lessons. Primary and secondary schools have promoted the Cube for its ability to enhance abstract thinking.

Researchers believe the Cube can encourage children’s love of learning – and it can also be a “tool in applying rather sophisticated mathematics to generate some solution algorithms”, according to a 2018 paper published in the Chinese Journal of Mechanical Engineering.

As an abstract learning tool, it has even inspired sophisticated research. “Rubik’s Cube was used as a model to study crystal electron diffraction, chaos, genetic, and other scientific issues,” the 2018 paper notes. “American mathematician Joyner David discussed group theory based completely on Rubik’s Cube and other similar mathematical toys.”

Famously private, Rubik has amassed a “small fortune” from Cube royalties, according to the Financial Times. In October 2020, Rubik’s Cube was sold to the Canadian company Toy Masters for $50 million.

However, Rubik dismisses the idea that he was ever particularly wealthy, especially as his millions were in Hungarian forints. But his invention did afford him the chance to travel around the world to promote his unusual toy. He started two foundations for aspiring Hungarian inventors and penned his autobiography Cubed in 2020.

Now aged 77, Rubik is married to Ágnes Hégely and lives in Hungary. His son Ernő Zoltán Rubik is a jazz musician and composer.

Rubik feels inspired that successive generations have stepped up to the challenge of the Cube. “It’s very satisfactory,” he commented. “There are so many economic, cultural and political difficulties in the world. The Cube gives me hope that in the end people are clever enough to solve their problems and survive.”