Remember What Was Inside The Brilliant Magazine Fast Forward? 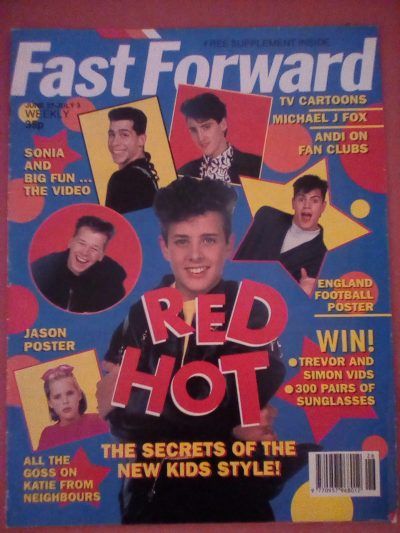 Fast Forward! The super cool magazine which gave kids their weekly dose of showbiz news, music, interviews, sport and much, much more! At a bargain price of 35p! Lets take a look at what was beyond the cover of that funky mag!! In this case the cover featured New Kids On The Block, very exciting for all the girls who loved these guys!! 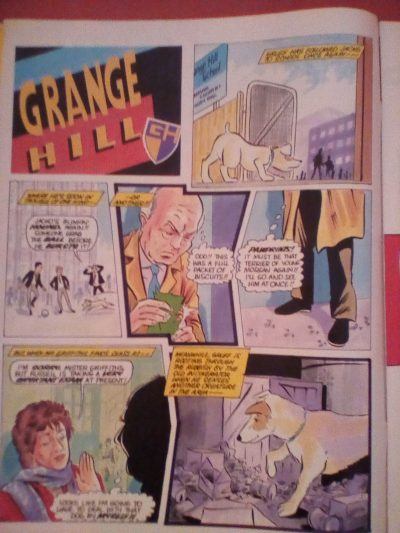 Comic strips, all the great magazines had comic strips! So ofcourse there was tonnes of them in Fast Forward! The hugely popular programme Grange Hill was one of them, following the goings on of Mr Griffith, Mr Bronson, Trevor Cleaver, Ziggy and the rest of the boys and girls from that Legendary school (I’m humming the theme tune now!) There was also a BBC TV Centre comic strip where the people in it were who was visiting the Beeb! Like the cast of Bread, Ed the Duck (remember him? With the funky green hair!) Andi Peters, Blue Peter.. The legend Gordon T Gopher had his very own comic strip, oh yes, Philip who?!! And there was The Pink Panther, Tom and Jerry! Plus Eastenders! Yes, the folk from Albert Square had their very own cartoon comic strip, with Ian, Pat, Frank, Cathy, even Dr Legg appeared sometimes! 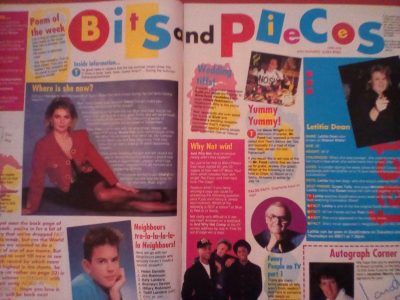 Bits and Pieces, was actually as the page suggests! A mixture of allsorts! Autograph Corner, here it is Jonathan Morris (Adrian Boswell from Bread!) The autographs were great to cut out and collect! Collecting, an 80s kids obsession!! Poem of the Week was featured, stars factfiles, fun facts, random stuff, always something new! 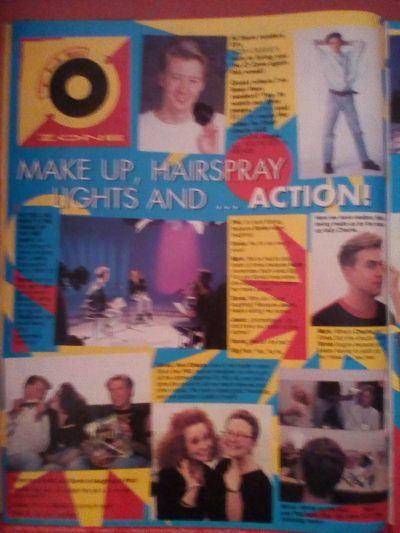 Here we have The O Zone, pictures and interviews from the music programme of the same name. That programme rocked!! This issue was Sonia! The lovely lass from Liverpool taking you through a day of her showbiz life! 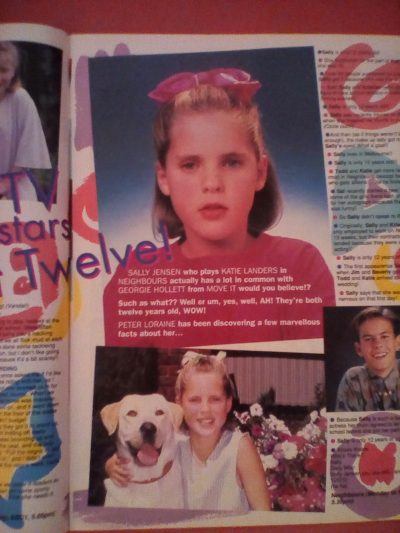 Fast Forward always did great features of the stars of the day, they always kept up to date with who the children loved! A very popular girl was Sally Jensen aka Katie Landers from Neighbours, who along with her screen brother Todd were often in this mag! There is the gorgeous Bouncer too, everyone loved that dog! He even had his own story lines and once, a dream sequence too! I wonder if fame ever went to his head! Ha ha!!
Sally Jensen was 10 when she got her role. Over 60 other girls auditioned. Originally Katie and Todd were only suppose to do 13 weeks, but they were so popular their contracts were extended! 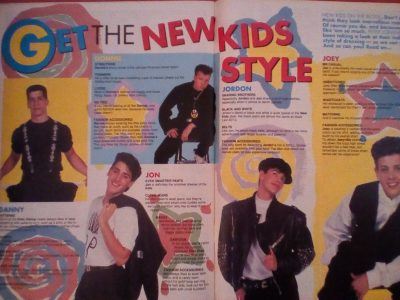 New Kids On The Block were huge! Those boys from Boston, USA! Danny, Donnie, Jon, Jordon, Joey. Fast Forward asks them their likes and favourites in the fashion world! Danny loves shorts! Donnie is into trainers! Jon is a denim jacket kind of guy! Jordon loves to wear black and white! Joey, that dude loves waistcoats! 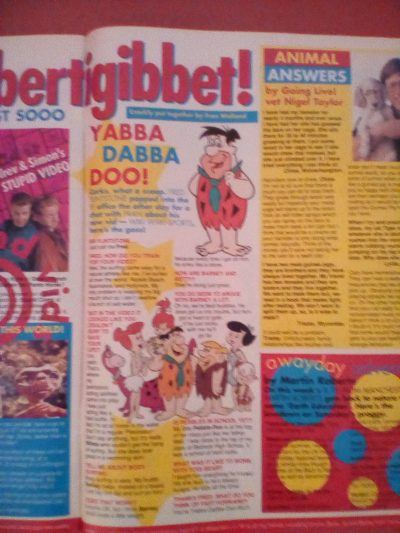 Flibbertigibbet, I kid you not! What a title! Here interviewing Fred Flintstone! Who says if Barney Rubble sticks with him he’ll go far! Wilma looks great in her new swimsuit, though she could’nt get the hang of surfing!
A Going Live regular who featured in Fast Forward was Vet, Nigel Taylor, answering all your questions on your beloved pets! 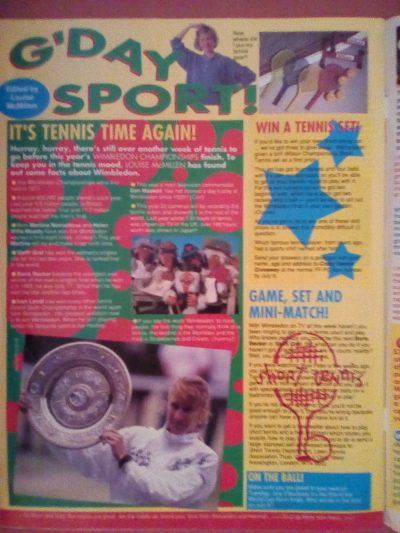 Sports page. Every week fun information of whichever sport was in the news! Football, tennis, rugby.. With Wimbledon it was always big news. The first ever Wimbledon was in 1877! And there was always a plenty of strawberries and cream!! Naturally!! 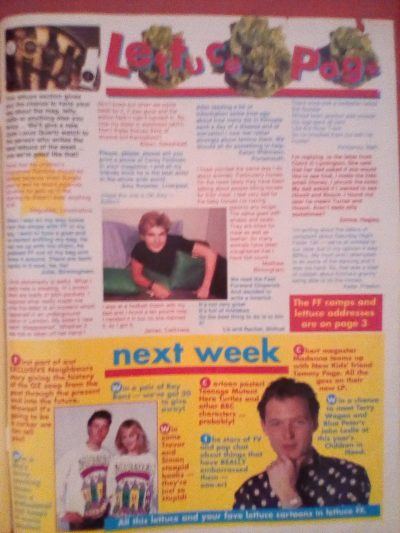 Letters page or in this case Lettuce page! Children giving their opinions on the news, or asking to print a picture of Corey Feldman! The best letter of the week got a Lorus Quartz, watch! Wahoo! 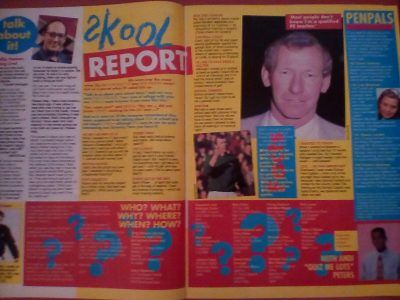 This was another page of random allsorts! Address’s where you could write fan mail, yes the good old fashioned pen to paper, to your favourite stars! Like Alex Papps, Emilo Estevez, , cast of Brookside, cast of Baywatch, Matt Dillon, even the cast of the Flying Doctors! Another Going Live regular Phillip Hodson, answered your problem letters, always giving top advice. And how could you forget Skool Report?! Stars talking about their school days! Here Bob Wilson says he was bad at Science, he hated school dinners, had to wear an awful cap, and he met a girl when they were both aged 12 and years later they married! Awww!
Fast Forward a super magazine full of everything kids loved!!