What Did 12 Year Old Macaulay Culkin Say In His Daily Express Interview? 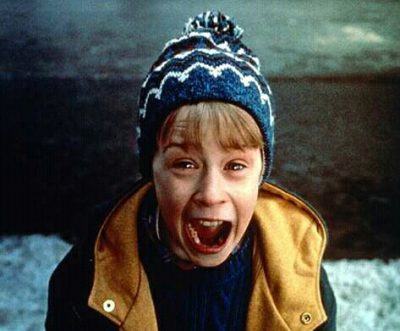 In the early 1990’s Macaulay Culkin was the biggest child star on the planet! Best known for playing Kevin McCallister in the huge box office smashers, Home Alone and Home Alone 2! For the promotion of Home Alone 2 Macaulay gave an interview, to The Daily Express newspaper, in November 1992, in New York! So what did twelve year old Macaulay Culkin have to say? 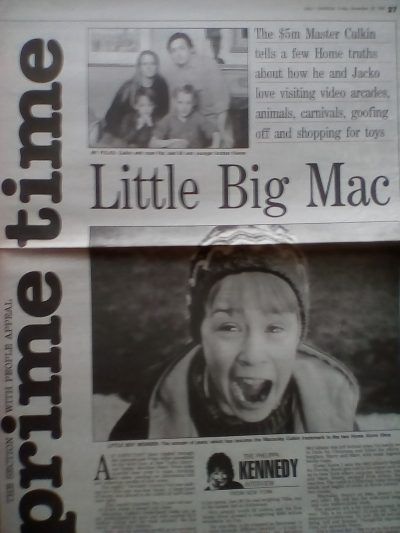 In New York’s luxurious Parker Meridien Hotel, the mighty Twentieth Century Fox were making sure Macaulay was kept happy, as a large bowl of sweets were placed at the interview table! Which were not touched, as Mac does not eat them!

Mac enters the room, fresh faced and smiling. Just 4ft 5in and weighing 78lbs. His first greeting was “Hmmmm” then he did his trade mark Home Alone gesture and put his hands on his cheeks!
The hottest kid in Hollywood was in the room! 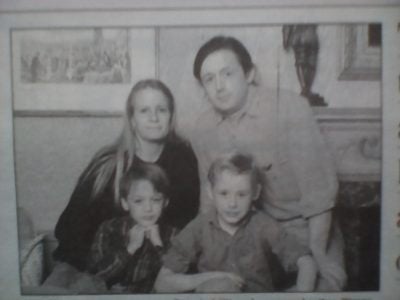 In 1992 Mac was worth $5 million and the first Home Alone film grossed $580 million worldwide for Fox!

Home Alone 2 was released on December 11th 1992. This time as the McCallister’s head to Florida, Kevin gets lost at the aitport and ends up in New York! Who else appears there? Harry and Marv, freshly escaped from prison! 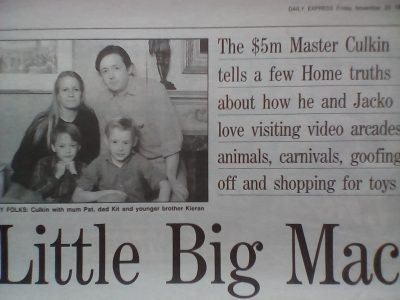 Mac is no ordinary twelve year old when being interviewed! With some practised answers! He is though a seasoned professional!

When asked about how he feels about being rich and famous, he says, “I’m just a normal kid. I like to go to the arcade. I like the lunch meet at school. Just regular old Mac like everybody else”
He also says, his parents are not very strict, and he is saving his money for college! His school friends had not changed towards him, he has known some of them since he was six! 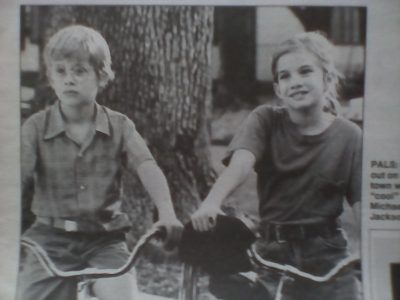 But it’s not every twelve year old kid that gets a call every other night from Michael Jackson?
“He’s cool, he’s alot like me. We go to the video arcade. We like animals, carnivals, goofing off and shopping” Mac says.
Who pays when they go shopping? “He does” Mac says, with a grin!
And, no, he didn’t think it odd that a thirty three year old superstar should prefer the company of a twelve year old boy to adults.

With that Mac then reminds the interviewer what he is there for! He firmly says, “Lets talk about the movie. Its funnier than the first one”

When Mac sees himself on screen, he does’nt really think of himself as being a big star! 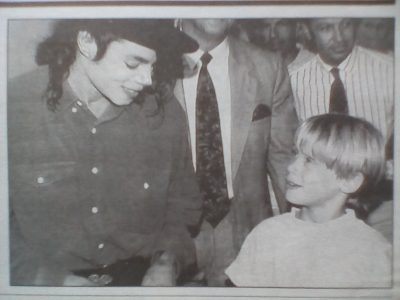 The only thing Mac does not like about filming is being away from his family. There is Dad, Kit. Mum, Pat. And, his six siblings, Shane,16, Dakota, 14, Kieran, 10, Quinn, 6, Christian, 5 and Rory, 3.
Kieran plays the part of Fuller, in both Home Alone films!

Mac says his parents ask him for his opinion on the parts he is offerd. But they make the final decision!

Kit Culkin, a former actor, got the reputation of being a pushy parent, living out his unfulfilled ambitions through his son.
Kit also managed Mac, when he read the script for the film The Good Son, he thought it was perfect for his son. But the films director thought Mac was too young and inexperienced to play the role of a fourteen year old disturbed boy. So Kit told Twentieth Century Fox they could not have Mac for Home Alone 2 unless he got the part in The Good Son!
Mac got the part! 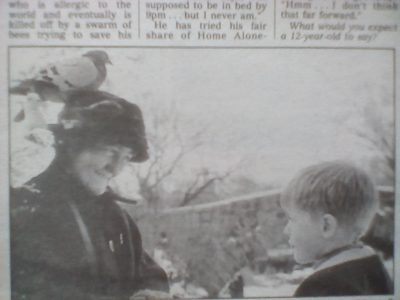 But with Mac if you can make millions for a Studio, you can get any part you want! Culkin was paid $250,000 for the first Home Alone, and after its success his pay rocketed! He was critised for his big pay cheque for Home Alone 2. “They could’nt do it without me” he simply says! 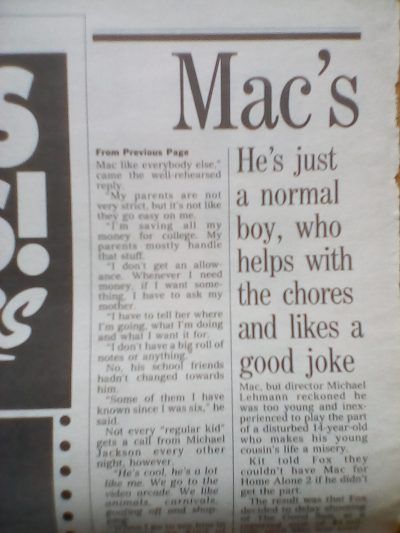 Mac was so popular he only had to wear a different trainer on each foot to start a fashion trend!

Home Alone director, Chris Columbus, insists Mac has not become a spoilt brat after the success he has had! He also denied Mac was setting a bad example with ‘Kevin’s’ booby traps and pranks in the Home Alone films!

Mac had done a straight drama film, My Girl. Playing Thomas J, a boy who is allergic to everything! Starring along side, Anna Chlumsky. Thomas J is stung by bees, which he is allergic too, and he dies.
The films bosses feared Macs screen death would upset his fans. But it did’nt do his career any lasting damage! 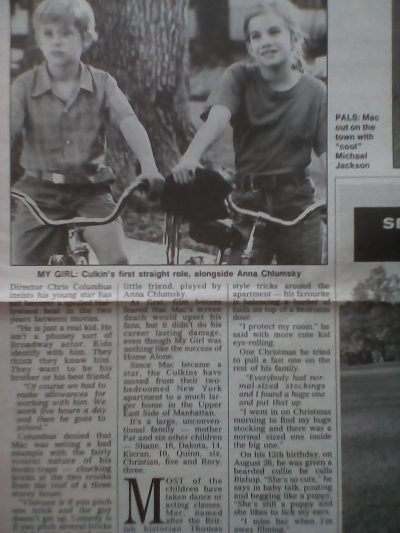 Mac, named after the British historian, Thomas Babington Macaulay, has been acting since he was six! Since Mac became a star, his family have moved from there small New York apartment, to a larger home in the Upper East Side of Manhattan!

Mac still has to make his own bed and he has chores to do! “On school nights I am meant to be in bed by 9pm.. But I never am!” Mac smiles!

For his twelth birthday Mac got a bearded collie dog, Bishop!

The interview ended with, does he ever feel exploited? He simply replies with, “Nope”