20 Of The Weirdest Video Game Glitches

Bugs and glitches are part-and-parcel of playing video games. Sometimes, a glitch can negatively alter the way you play the game – and no one wants that – but generally speaking, glitches are usually pretty harmless and won’t massively disrupt your gameplay.

Often they’ll make you giggle at their sheer absurdity, and it can even be fun to actively seek out and engage with the weirdness. Here are a few of the funniest and most bizarre glitches you’ll find while gaming. 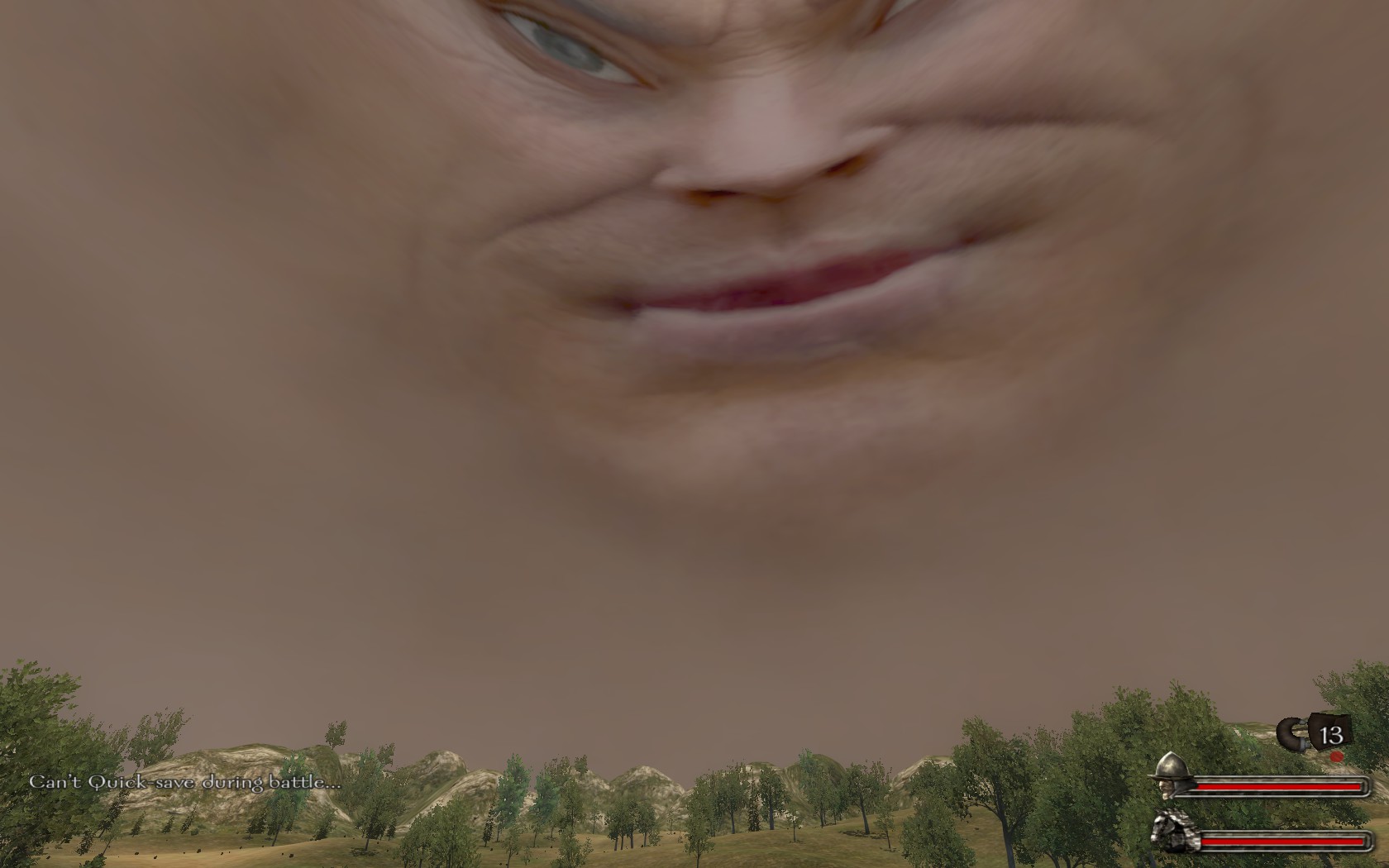 Mount & Blade features one hilarious texture glitch, which caused a giant face to appear in the sky. Nothing in particular triggers this – you could just be riding along and suddenly look up to see a face staring down at you. The glitch is evidently an error where the texture for the sky is accidentally swapped out with a random face texture, which is equal parts terrifying and hilarious. 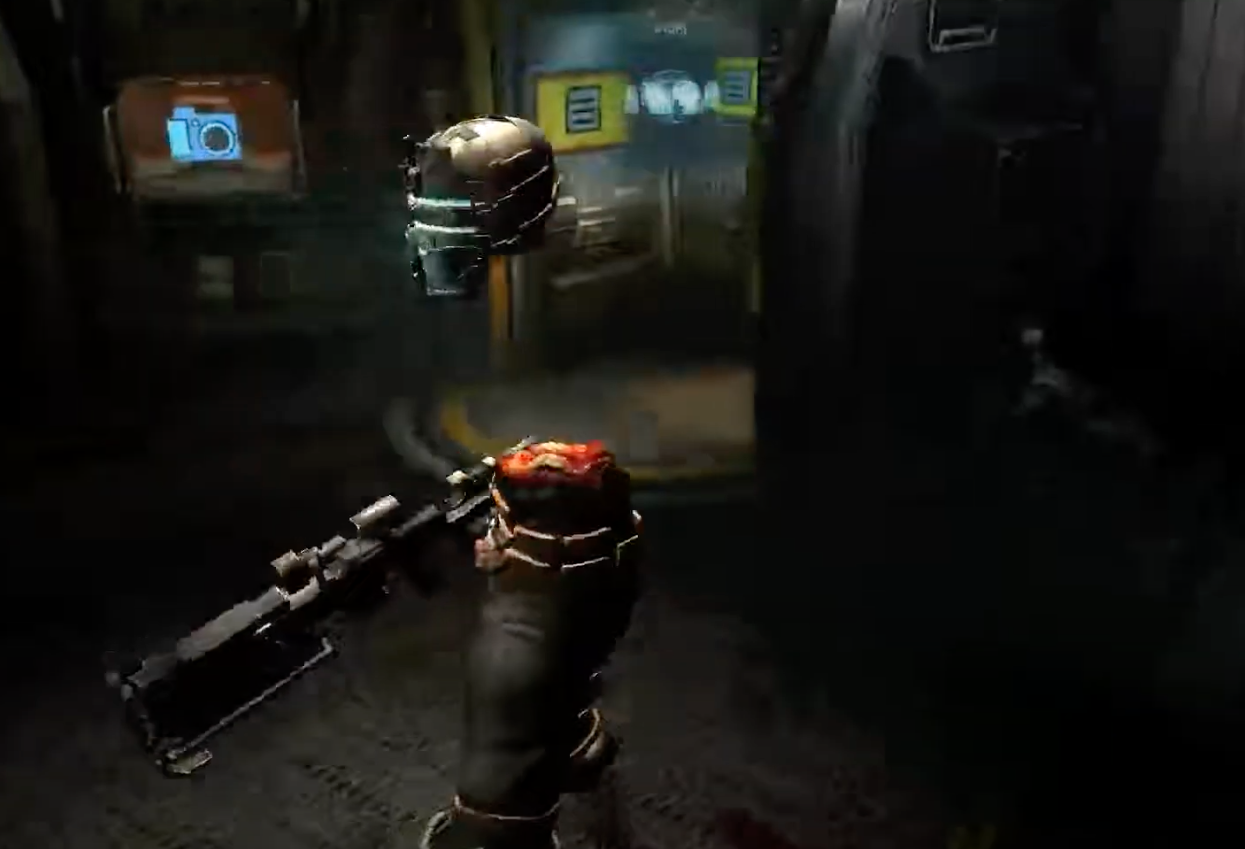 Dead Space 2 – a gory horror game set in space – is creepy enough as it is, but there’s one glitch that takes the game’s innate spookiness to a whole other level. One elevator-related glitch makes the main character, Isaac Clarke, appear with no torso and truncated legs. Somehow, Isaac is still able to go about his day-to-day life despite missing the entire upper half of his body, but realistic “meaty” sounds can be heard whenever he moves. Ew.

18. Demon babies in The Sims

The Sims franchise may be one of the most popular video games ever, but it’s fair to say that it’s also one of the worst for glitches. Arguably, the freakiest recurring glitch is the one that makes babies look like literal demons. Out of the blue, your baby could suddenly appear with eyes on stalks; freakishly long fingers; or a mangled face. Or if you’re lucky, all three! That’s a baby only a Sims mother could love! 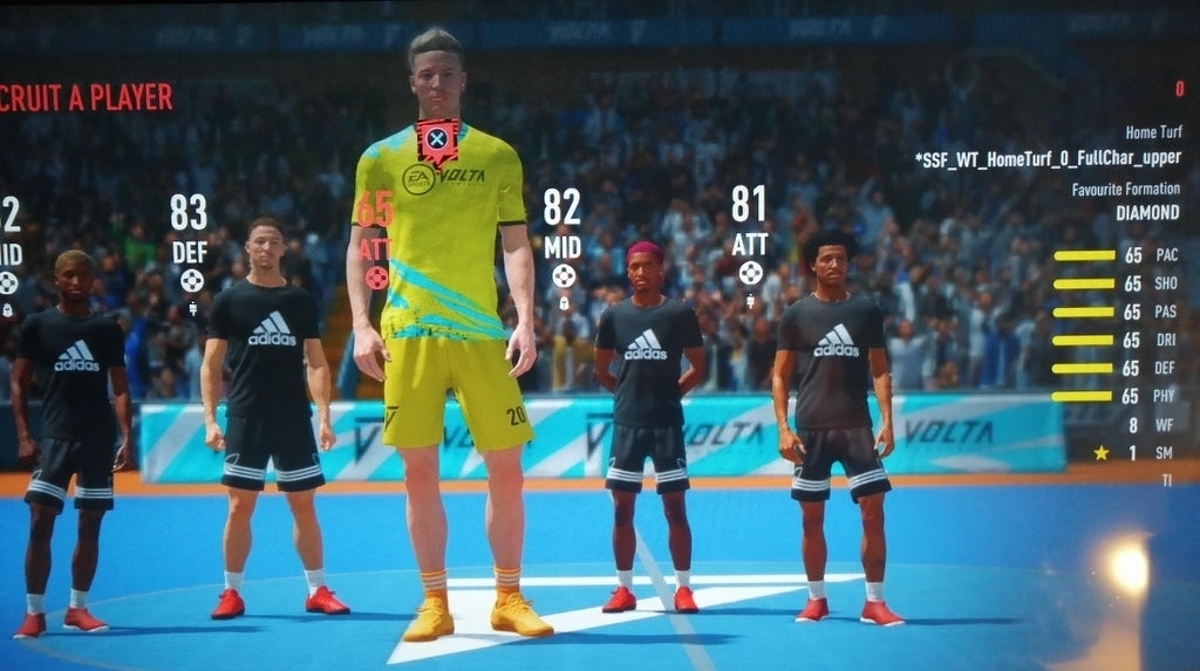 Reports of giant goalkeepers on Volta, the five-a-side mode on FIFA 20, began to pop up on social media soon after FIFA 20 was launched in September 2019. Players would usually run into this giant keeper when challenging other players to an online match. Naturally, his unusual size would block much of the goal, making it tricky – and sometimes literally impossible – to score. Pretty cool, right? 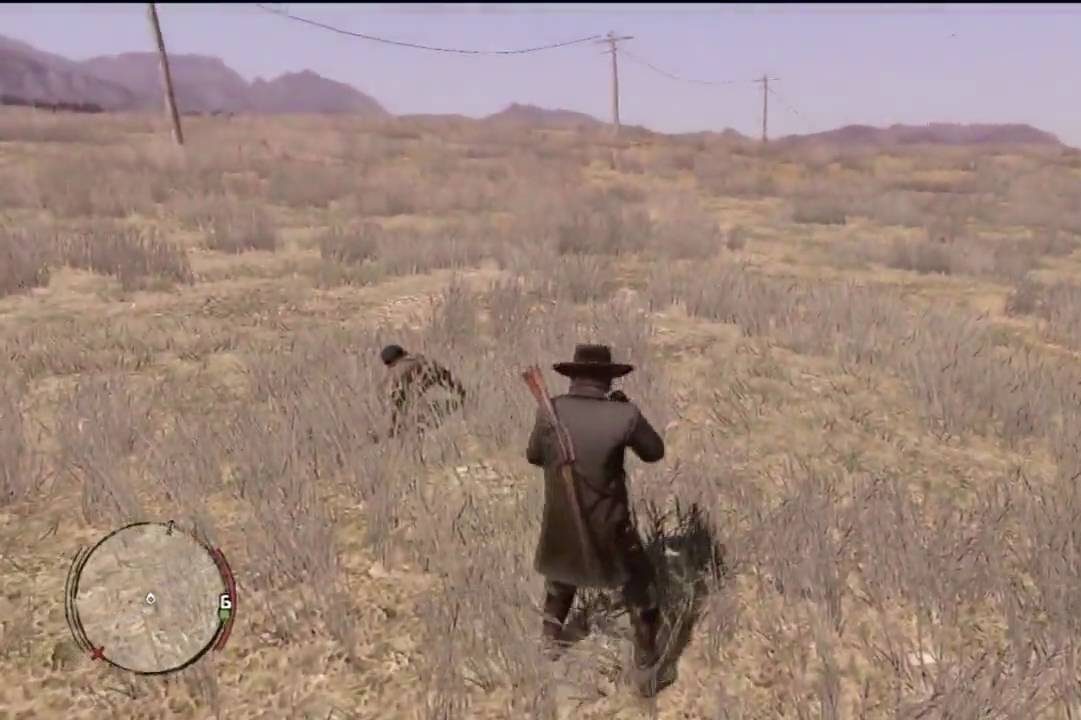 This glitch is bizarre. Shortly after the release of Red Dead Redemption in 2010, people started reporting seeing ‘animals’ that looked like people. These hybrids included a pig man, a cougar man and, perhaps most famously, bird people that flapped their arms like wings. Unfortunately, it’s pretty difficult to find this glitch now, as it was patched in an early update, but Red Dead Redemption 2 does feature an Easter egg in reference to this funny glitch in the form of the ‘Donkey Lady.’ 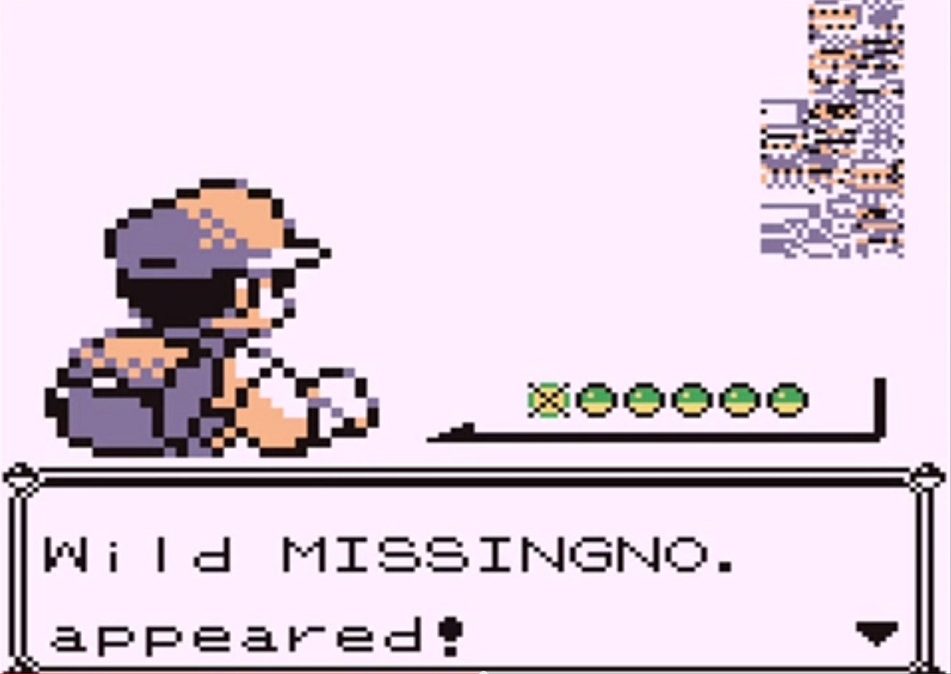 It was fairly straightforward to encounter MissingNo. on Pokémon Red & Blue, if counterintuitive. First, you’d watch an in-game tutorial for Pokémon capture in Viridian City. Then, you’d use a Pokémon with the ‘Fly’ move to travel over to Cinnabar Island. Finally, you would use a Pokémon with the ‘Surf’ move to travel up and down the eastern shore of the island until you trigger an encounter with a wild Pokémon. If you completed these steps with the correct timings, you’d be guaranteed a showdown with the infamous ‘MissingNo.’ 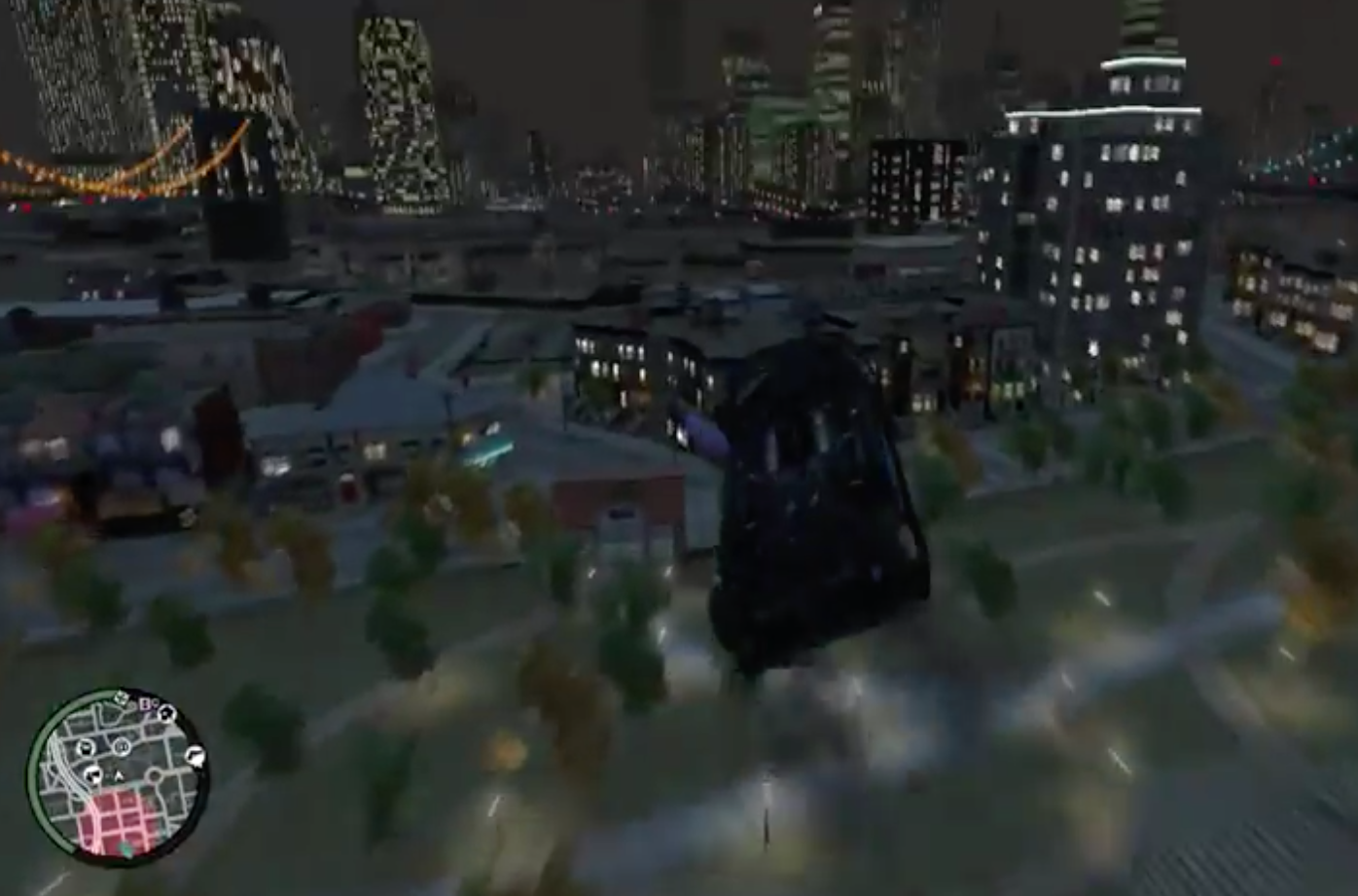 Also known as the ‘car-cannon glitch’, this crazy glitch happens when players drive at speed into any one of the swing sets located throughout Liberty City. After a few seconds, you’ll find your car catapulted into the air and flung across the city. The landing will often propel players through the windshield of their car like a human cannonball – and yes you will die as a result, unless you chose the set at the northernmost point of the map. 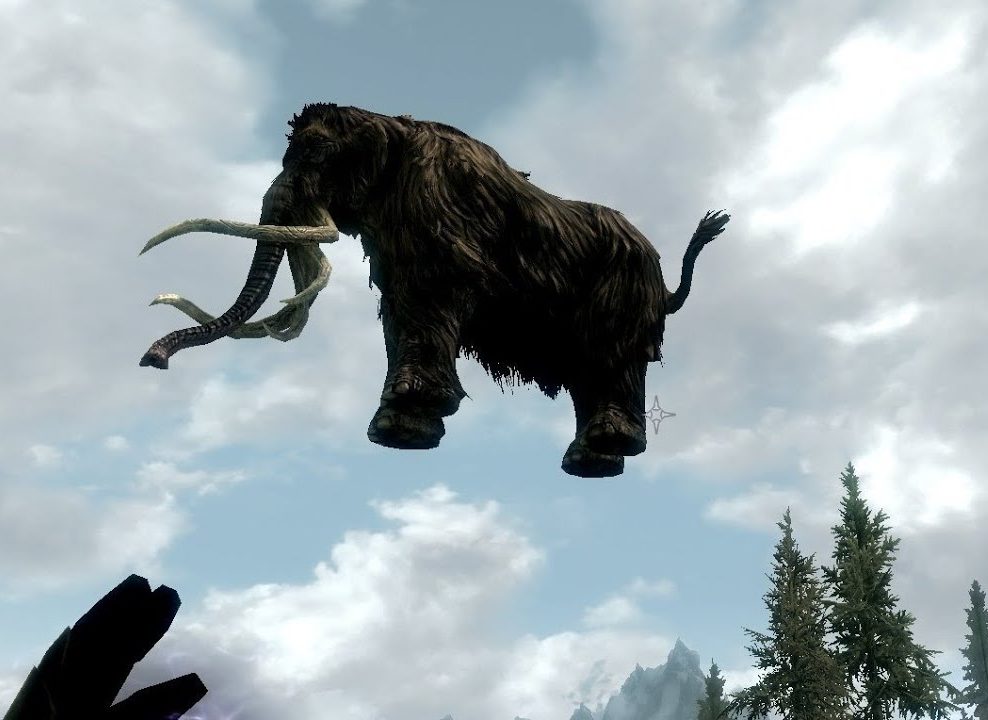 Back when Skyrim was first released, it was possible to occasionally spot a huge creature floating in the sky. While you’d be forgiven for thinking it was a massive bird or even a dragon, it turns out that this flying beast was actually a mammoth. These flying mammoths could actually hugely benefit players, as when they’d eventually fall from the sky and perish you could loot their ivory and meat. 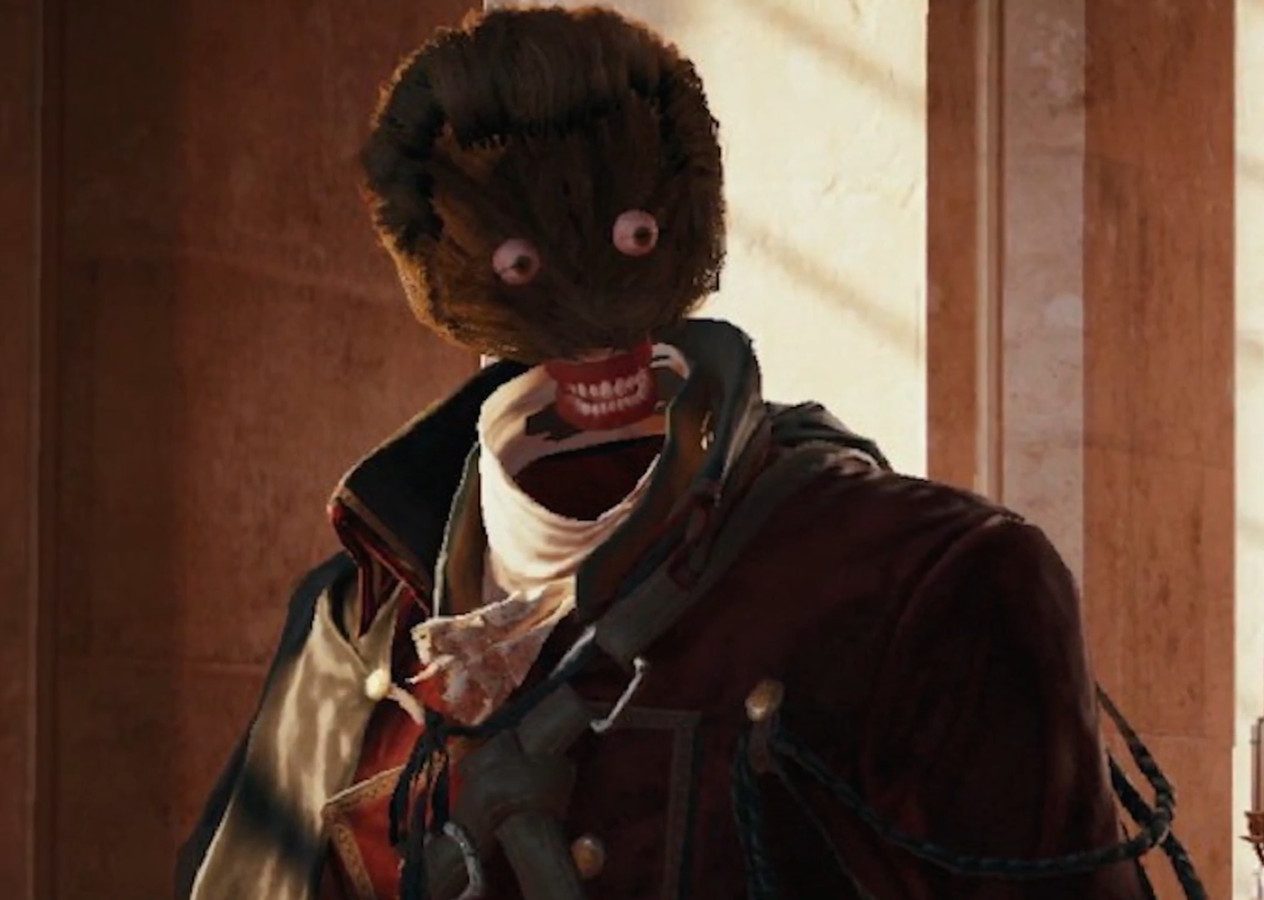 Assassin’s Creed: Unity had its fair share of glitches at launch, but by far the most widespread glitch is one that involved characters’ faces. The glitch would seriously mess up certain characters’ appearances, with some seeming to have nothing but eyeballs and mouths where their faces should be. The game, usually so proud of its attention to detail in the name of historical accuracy, actually released an official apology over the hilarious and traumatising glitch. 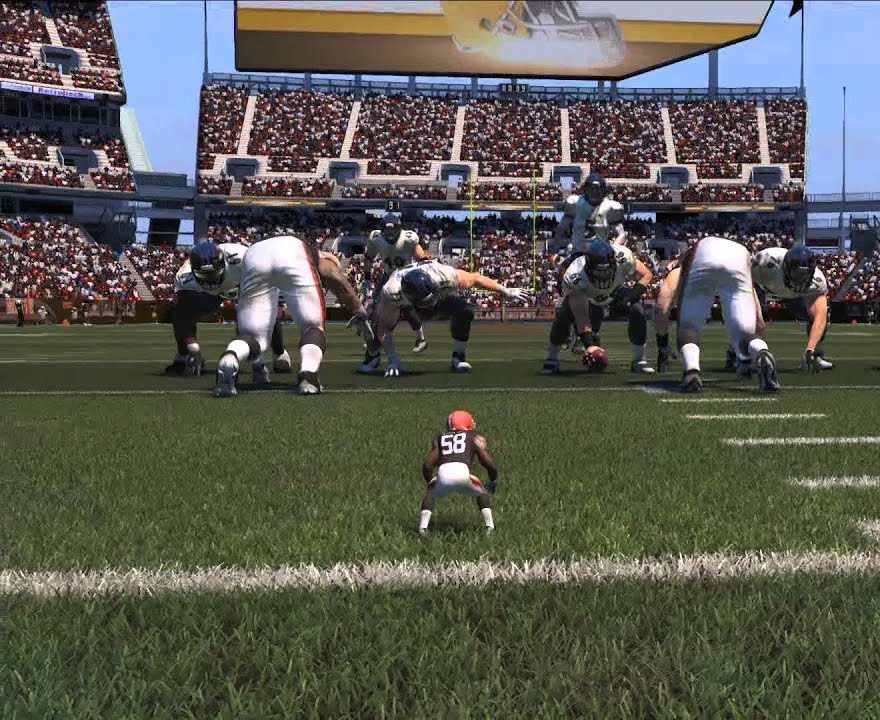 If you’ve played the 2015 edition of Madden NFL, you might have noticed something odd about the game’s portrayal of Christian Kirksey, the linebacker for the Cleveland Browns. For some reason, the 6’2”, 235-pound player was reduced to the size of a scrawny cat in the game. The developers embraced the ‘Tiny Titan’ glitch – as did Kirksey himself. “I just immediately started laughing,” he said in a 2014 radio interview. 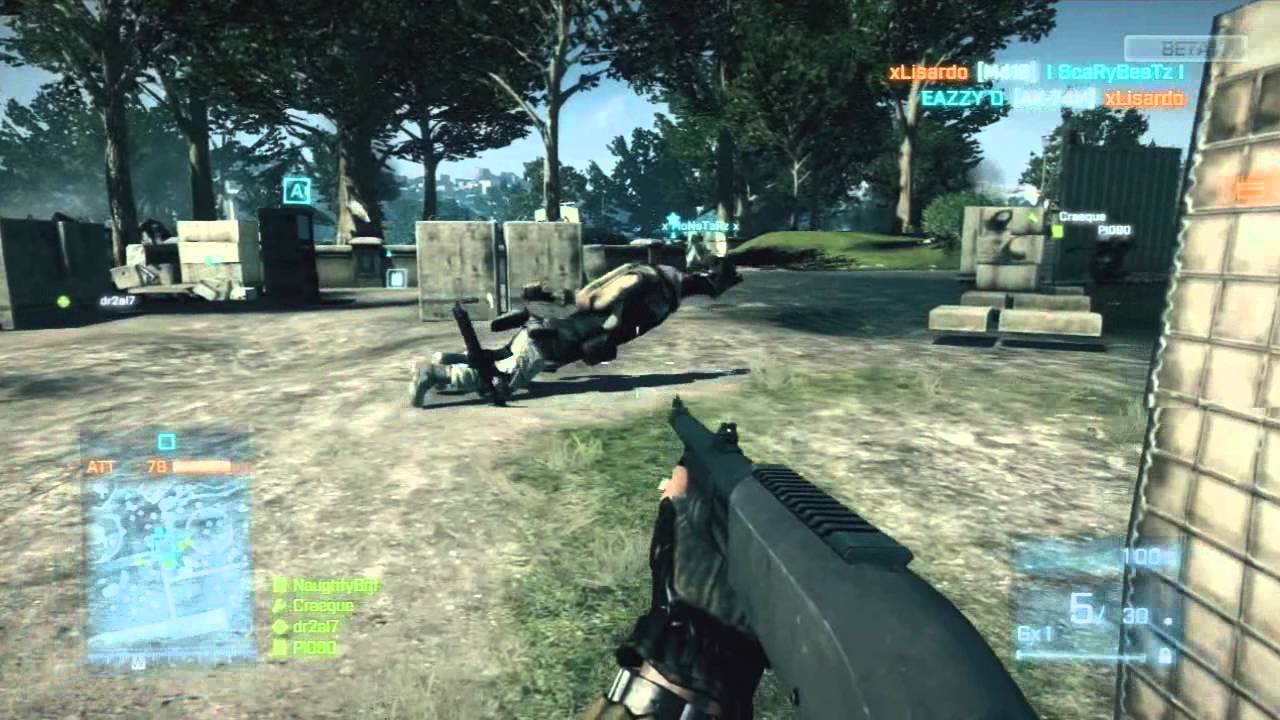 The Battlefield series is renowned for playing host to a number of bugs and glitches. While these flaws have ultimately damaged the brand’s reputation, some of them added a certain charm to the shooter series. One of the strangest glitches in the beta version of Battlefield 3 has to be the game’s notorious ‘worm people.’ The glitch would occur when players triggered the crawl animation – causing in-game soldiers to transform into grotesque human worms. These worm-people would also bizarrely fire their weapons using their legs or feet instead of their hands – gross! 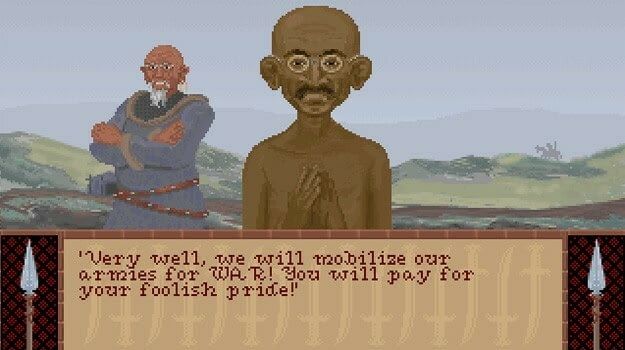 The first Civilization video game featured an ‘aggression level’ for each AI leader, ranging between 1 and 255, which could either be increased or decreased by the player’s behaviour. Gandhi makes an appearance in the game, and, as one would expect, game developers gave the pacifist leader a baseline aggression level of 1. However, they didn’t consider what would happen if a player tried to make Gandhi less aggressive. Hilariously, if you try to make Gandhi less aggressive, his aggression level will actually roll over to 255 – the highest in the game.

8. Scaling walls with a trash can in Fallout 4 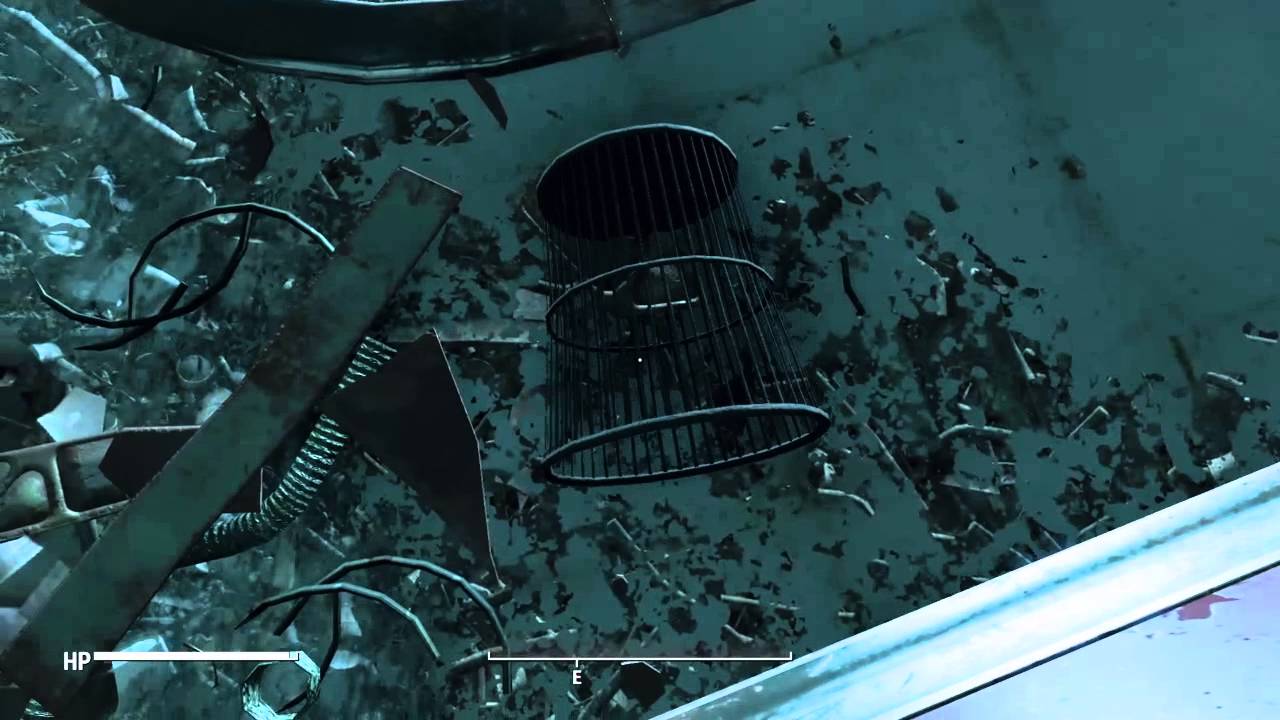 Fallout 4 offers a unique set of armour called ‘Freefall Legs’ which allows the player to never take damage as a result of falling. You can find them in a safe at the top of the Mass Fusion building, the tallest in the game. You can get to the top of the building by using a jetpack, or you can exploit a funny glitch which allows you to climb the building’s walls using a trash can. If you pick up a trash can and stand with your back against the building’s wall, you’ll be able to magically scale up the wall. Why and how? Who knows! 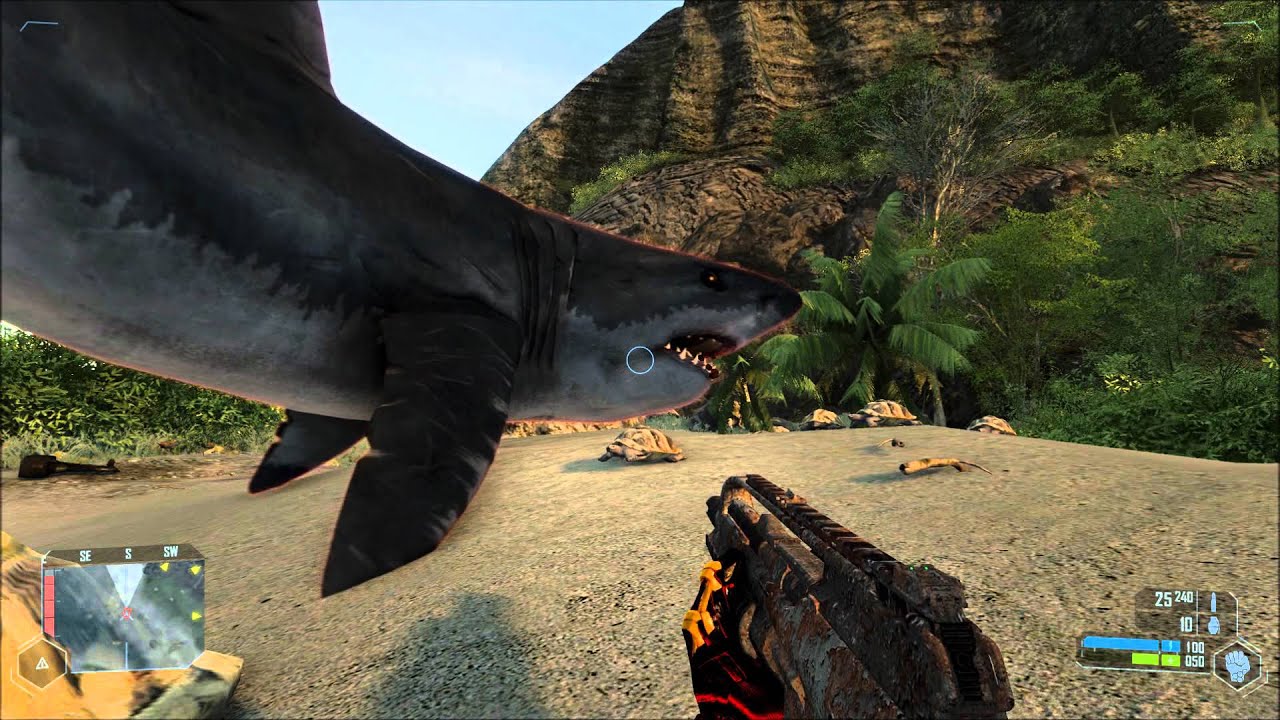 Crysis is a classic shooter game which sees you do battle with aliens on a remote island. To stop players from swimming off the edge of the game, deadly sharks will attack your character if you try to swim out too far. These sharks are incredibly glitchy, any attempt to engage them will lead to them lunging onto the beach and chasing you as if you were in the water. They’re just as good at flying as they are at swimming so you’ll have to be agile to escape their snapping jaws. Yikes! 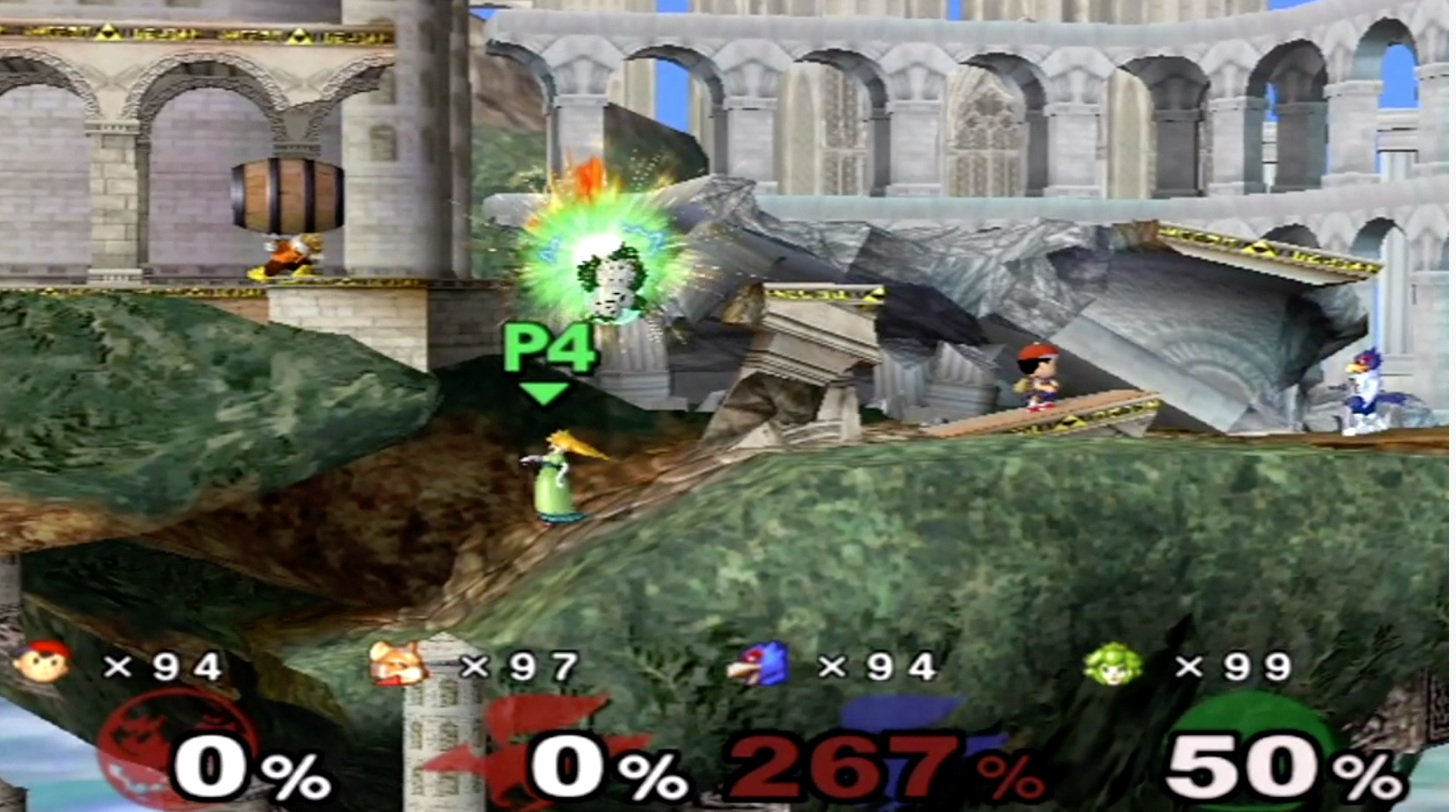 Triggering the black hole glitch in Super Smash Bros Melee is complicated, but it’s worth it. With friends playing as Fox, Falco and Peach, fire 15 regular shots and two fully-charged shots with the Super Scope. Have someone hit you from behind without firing and you’ll have infinite ammo, which can be bounced between Fox and Falco with reflector shields. Get Peach to jump into the blast stream until a line of ‘clang bubbles’ appears, then stop firing the scope. Have Peach toss 10 to 15 vegetables into the bubbles before pushing Falco off his ledge. This will result in a ‘black hole’ of projectiles that won’t despawn. If any character besides Peach touches it, they’ll suffer 999% damage. 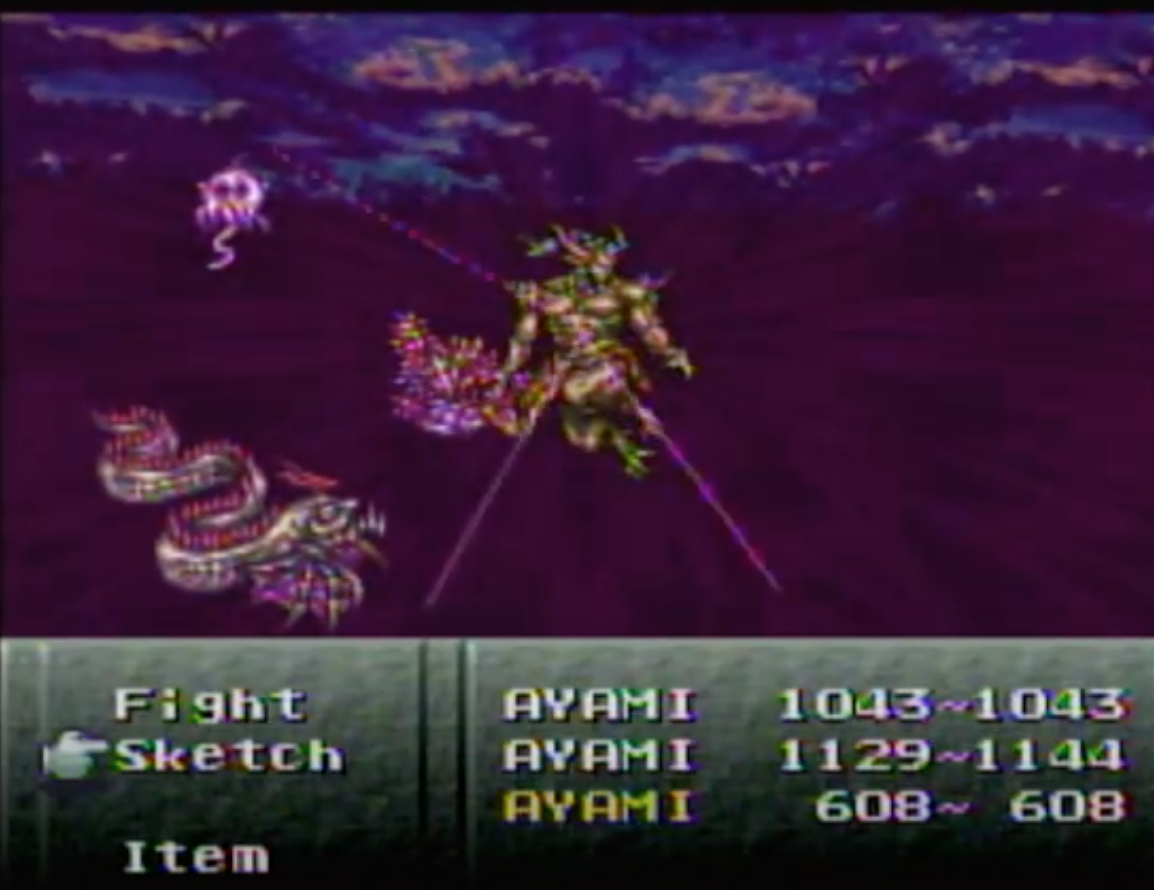 Relm’s sketch glitch is arguably the wildest glitch in the classic SNES game Final Fantasy III. The glitch happens when Relm’s ‘sketch’ ability misses its target. This, in turn, results in a programming error. The effects of the error are wide-ranging, from simple freezes to total data erasure – so this isn’t something you want to try without planning. Some players have figured out how to control the volatile glitch and use the bug to fill their inventory with Dirks and Gem Boxes. Some have even managed to use the glitch to acquire infinite Illuminas or Economizers.

4. Swordless Link in The Legend Of Zelda: Ocarina Of Time 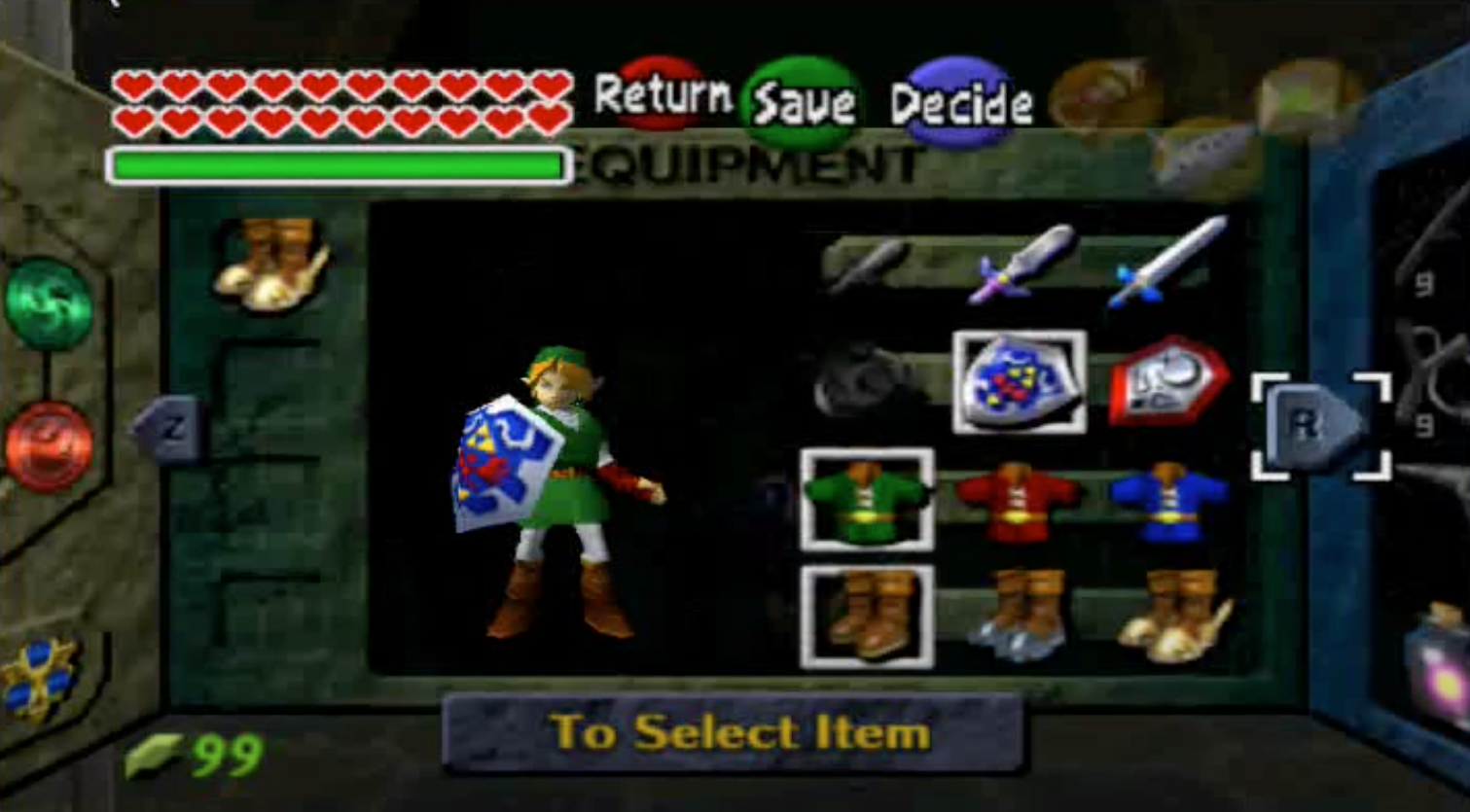 The Legend of Zelda: Ocarina of Time is notoriously glitchy, but perhaps the most famous glitch of them all is the Swordless Link glitch. The glitch is easiest to encounter in v1.0 of the game. In the final battle with Ganon, save and quit the game once he knocks the Master Sword out of your hand. This causes the sword to be unequipped in Link’s inventory, and once you save and reset, Link will once again appear wordless. This glitch in and of itself doesn’t make much of a difference to gameplay, but it’s a gateway to performing several other game-breaking sequences.

3. The door glitch in GoldenEye 64 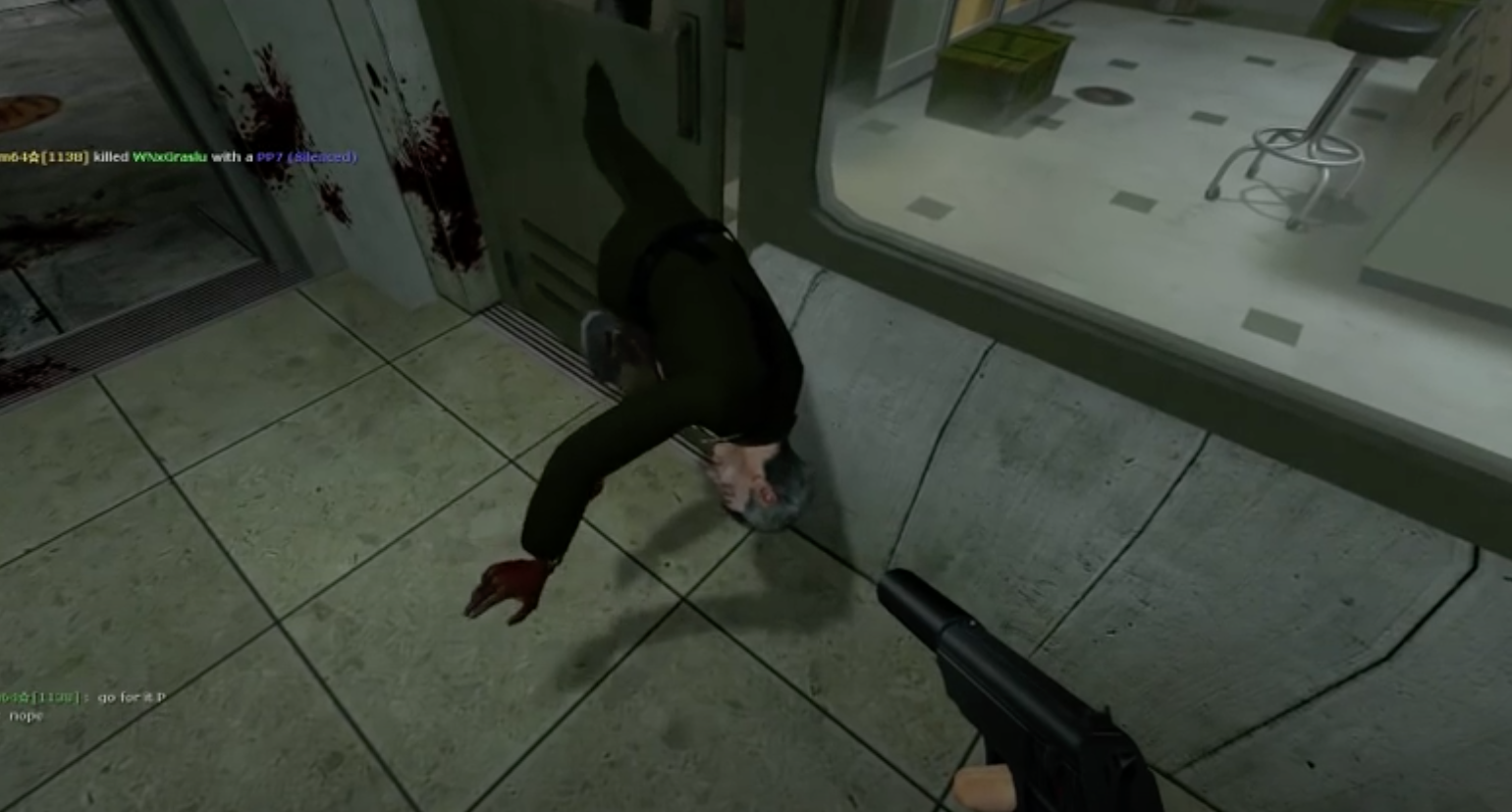 GoldenEye 64 had a fair few glitches, but the ‘door glitch’ is without a doubt one of the weirdest ones in the game. If you shoot an NPC while they’re standing in a doorway, they’ll die as the door shuts, resulting in a glitchy and protracted death. They’ll twitch around while appearing to be literally stuck in the middle of the door – not the most dignified way to go. 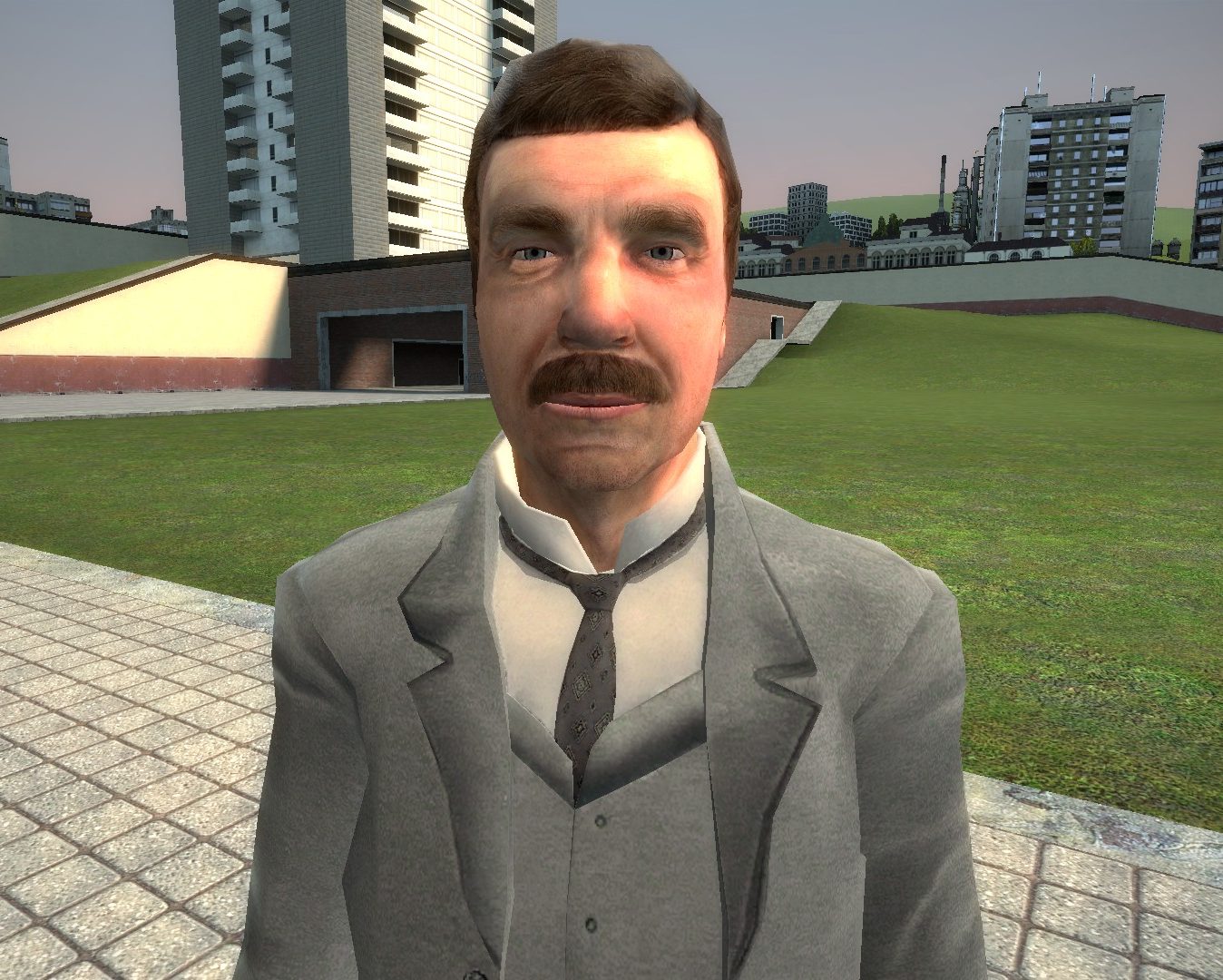 While there’s a lot to be said for outlandish, physics-bending glitches, more subtle and disturbing glitches can be just as interesting too. Sherlock Holmes Nemesis, a 2007 PC game, featured an incredibly creepy glitch involving Dr Watson. At certain points in the game, Dr Watson will follow you around and sometimes he will really go above and beyond to stay by your side, teleporting in front of you with zero warning. 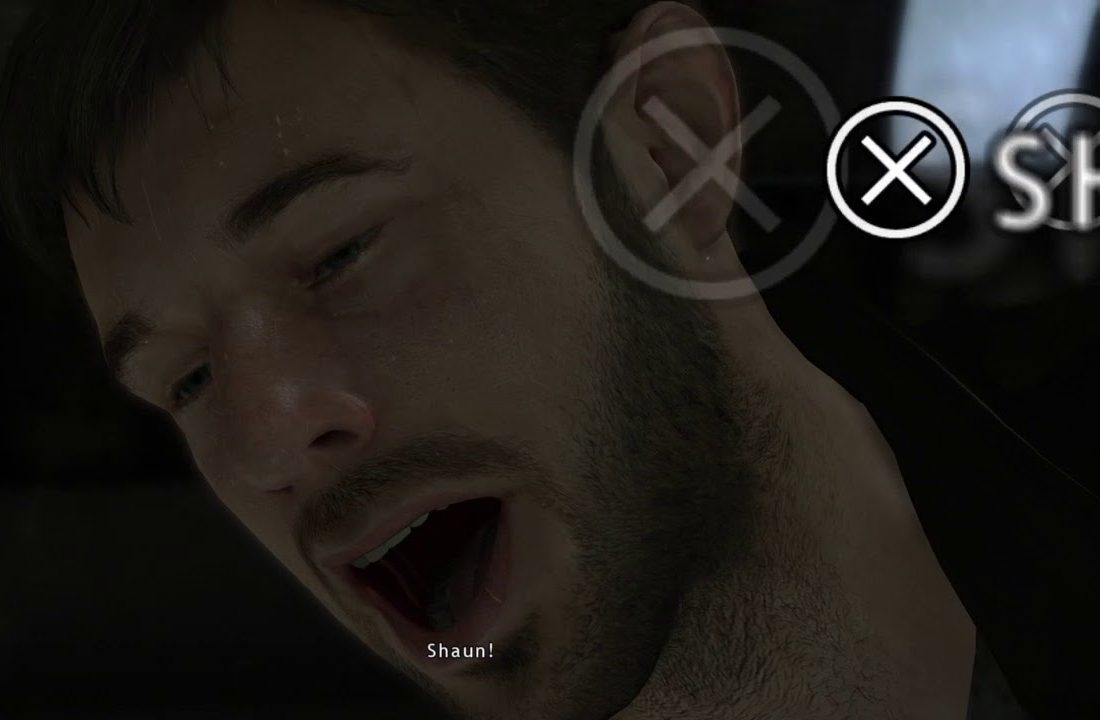 At the beginning of Heavy Rain, the main character loses his son in a shopping mall. For the next few minutes, you can control him as he frantically looks around for his son, and pressing X will make him shout his son’s name: Shaun. There’s a glitch where this ability to shout “Shaun” continues, even past the scene in the shopping mall. Jarringly, you can still do this towards the end of the game, even as events take a dark turn. The glitch results in players being able to hysterically shout “Shaun” during a touching scene in which you rescue Shaun and face up to his would-be killer.