“The world is always changing” feels like a platitude, but rarely is the phrase used to describe the fiery spectacle of new land being created.

That’s exactly what happened this week in La Palma, a tourist spot nestled among the Canary Islands, a place not usually known for its devastating geological developments. 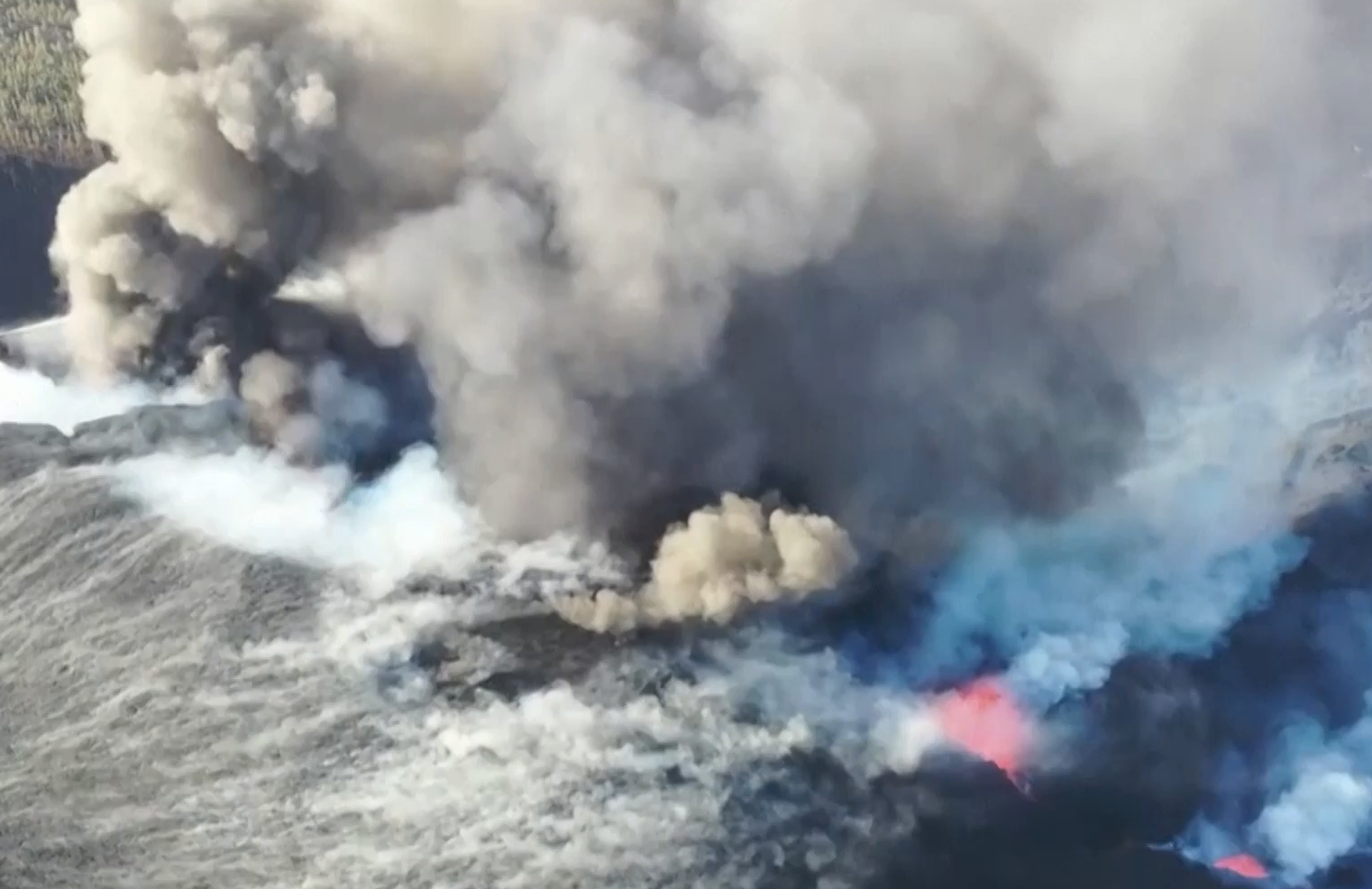 La Palma has been hit by several earthquakes since the beginning of September, some with a magnitude of more than 3.0

These earthquakes have led to dramatic volcanic eruptions that are literally reshaping the island. 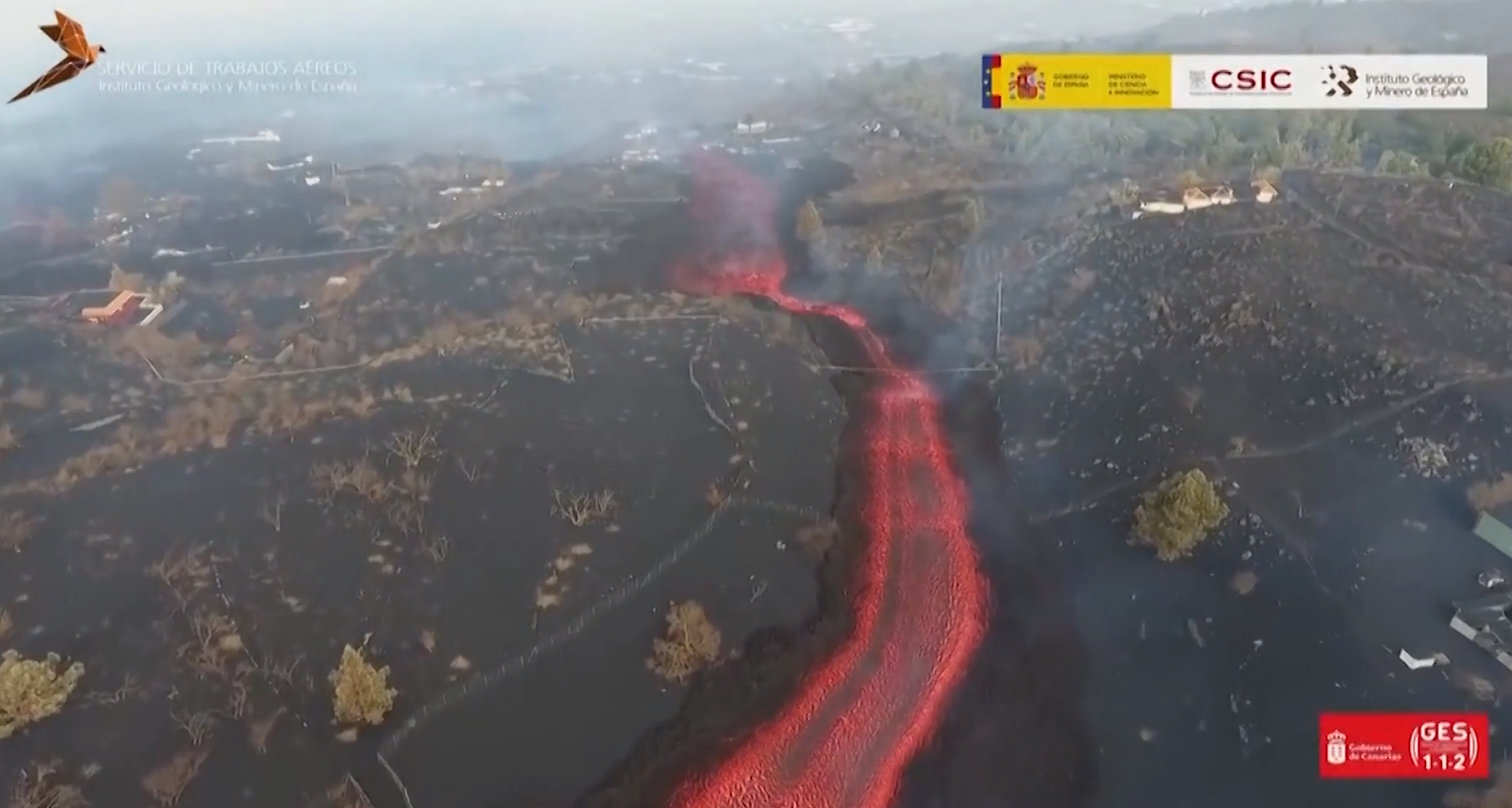 The lava spills are coming from Cumbre Vieja, literally translated as ‘Old Peak,’ which last erupted in 1971. Ferocious flows of magma are destroying the countryside and endangering residents.

More than 6,000 people have been forced to flee their homes amid the volcanic destruction 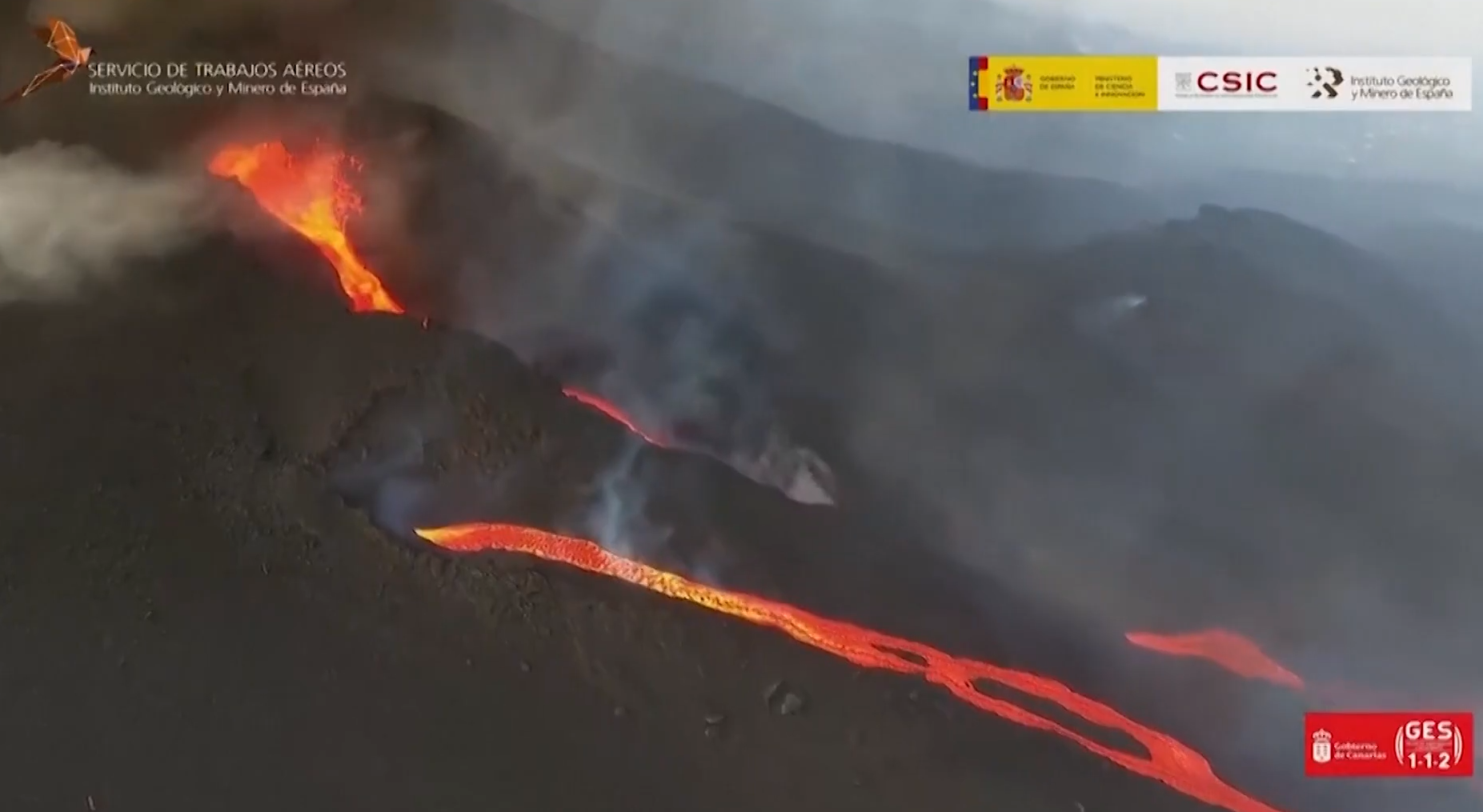 Said the Canary Islands’ regional president, Angel Victor Torres, “It’s not over yet, we don’t even know how long there is to go. We’re in nature’s hands.”

But it’s not just those directly in the path of the molten menace who are worried. Scientists have warned that the toxic fumes released by the eruptions are spreading unchecked.

This is because, as the lava reaches the Atlantic ocean, it rapidly cools and forms rock, creating new coastline. The byproduct gasses of this process, however, can be deadly. 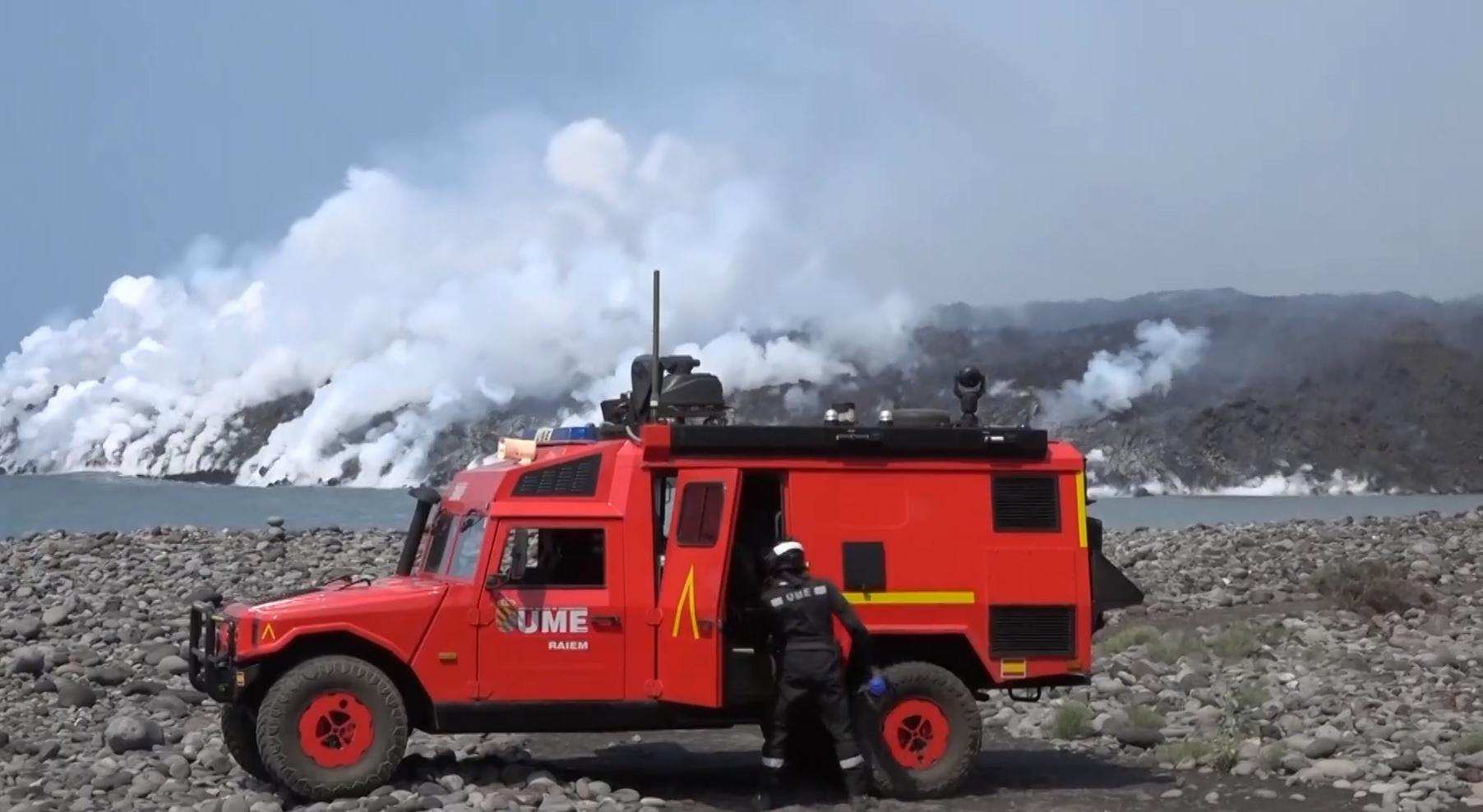 As it meets the ocean, the lava rapidly cools from more than 1,000C to a mere 20C, creating a violent reaction

Scientists call it a ‘thermal shock,’ with byproducts including vapour composed of hydrochloric acid. This can be extremely dangerous as an irritant to eyes and skin.

As a result, the residents of the island have been instructed to stay indoors and close all windows. The picture of paradise has suddenly become quite claustrophobic. 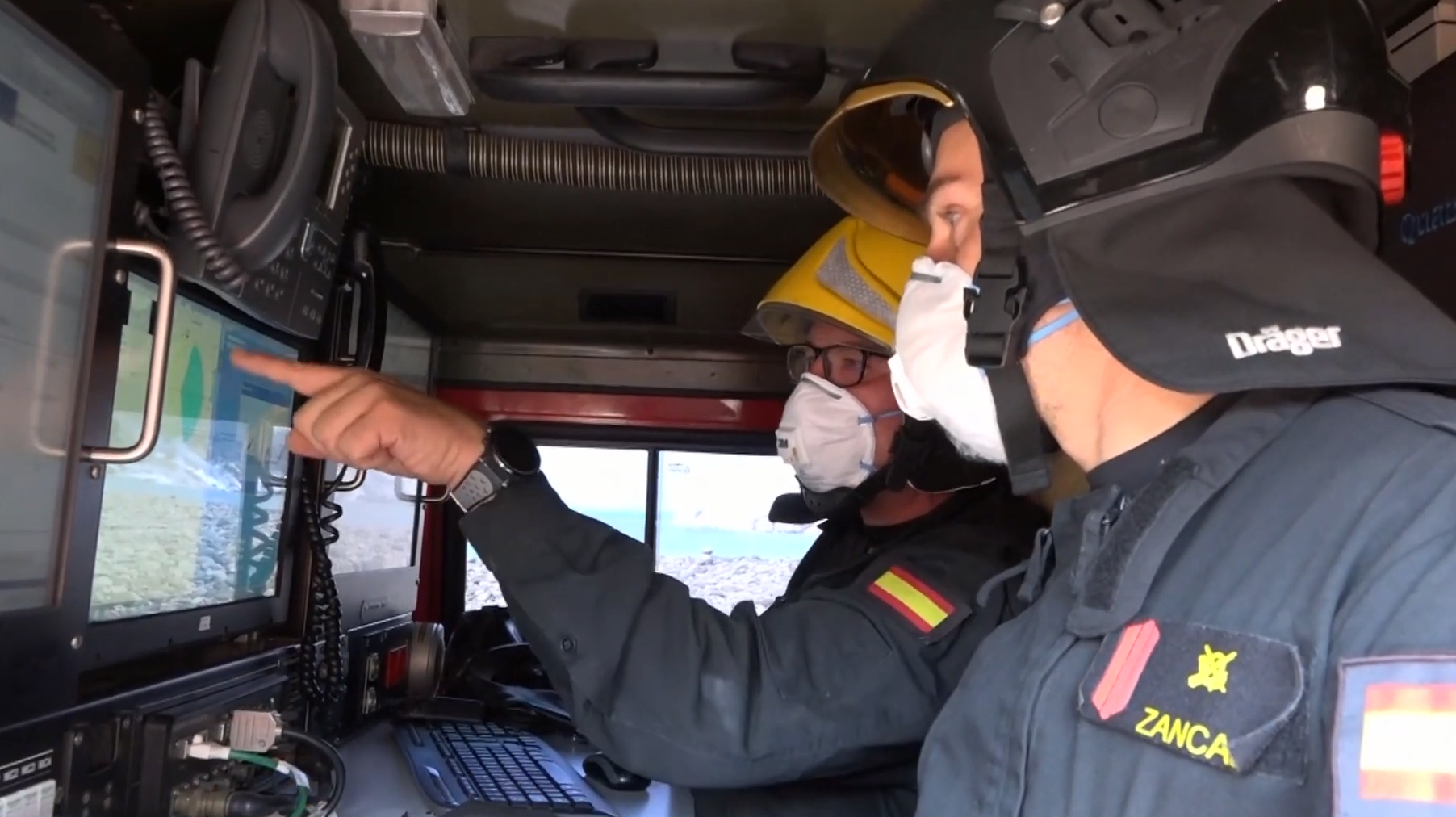 The island is home to 85,000 people and neighbours Tenerife, another popular holiday destination

Nearly 600 houses have been destroyed by the earthquakes and eruptions, as well as many banana plantations which form the backbone of La Palma’s trade concerns.

Spain, which holds jurisdiction over the North African islands, has declared the island an official disaster zone, which will expedite financial aide to La Palma. 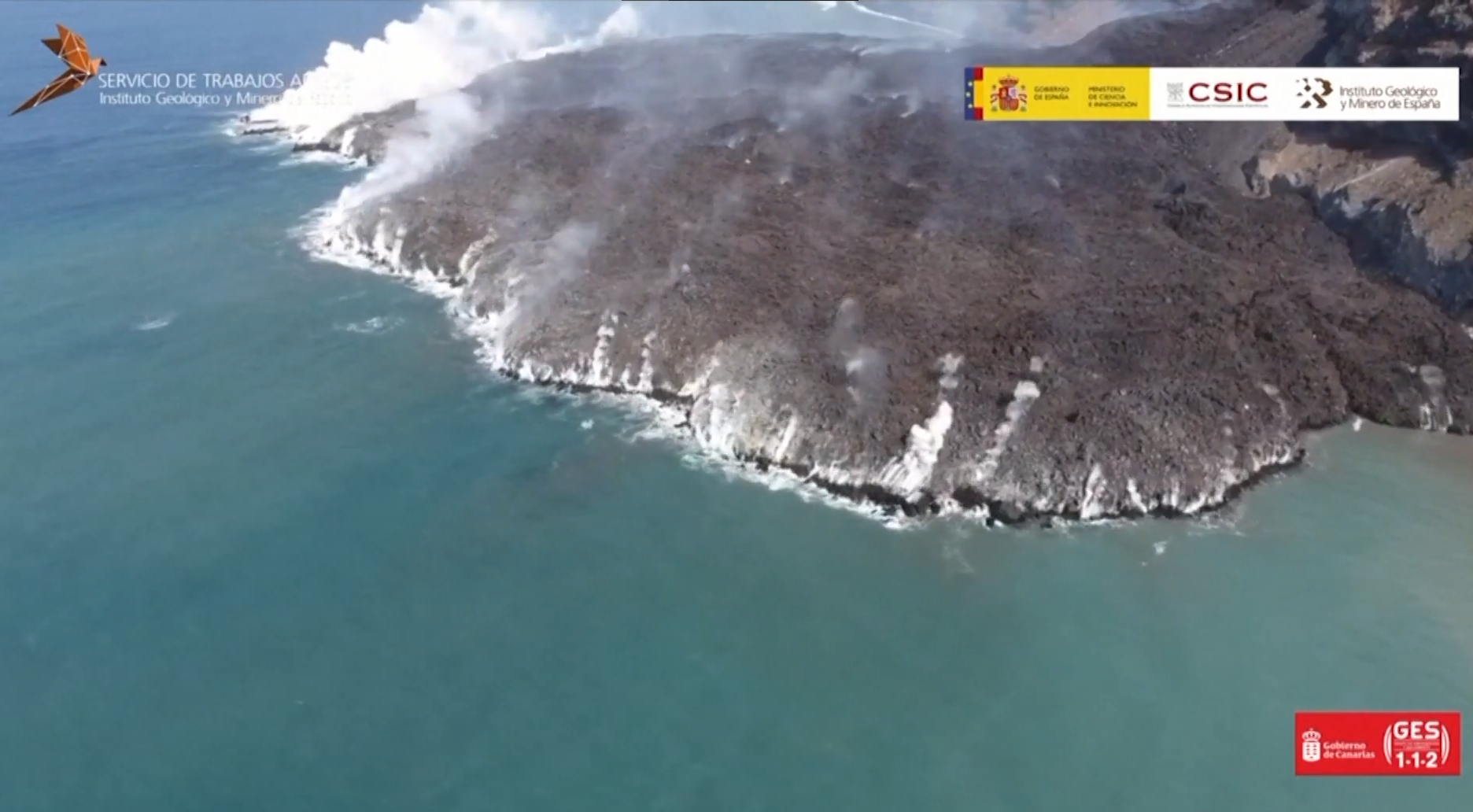 There’s no sign of the disaster slowing down, however…

The most recent earthquakes have created a fissure in the volcano, meaning that lava and toxic gases are now pouring forth from two further crevasses in the mountaintop. 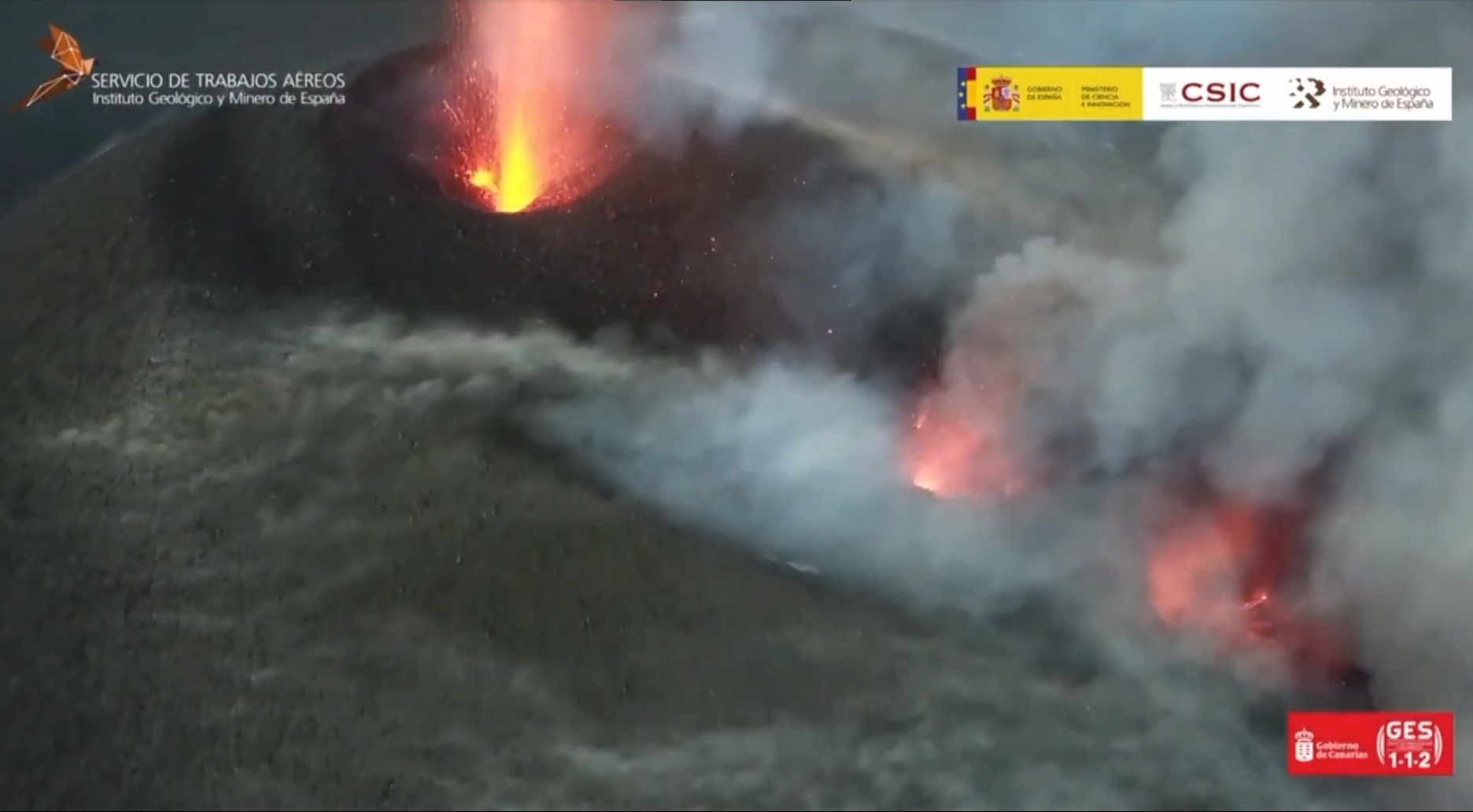 Even emergency workers are unable to approach the area immediately surrounding the volcano due to poor air quality. 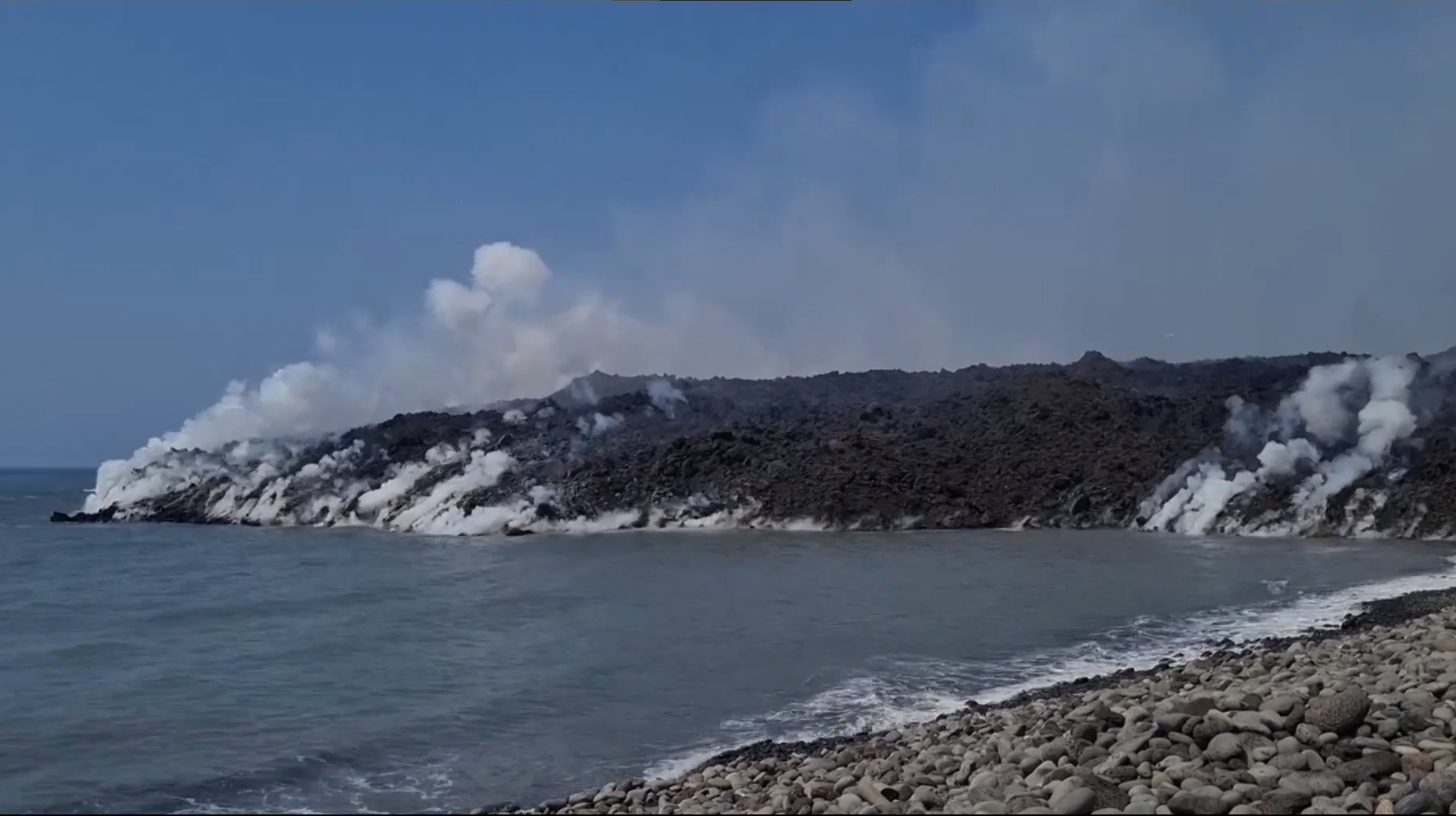 The eruptions have also destroyed 21 miles of road and rendered large areas of land completely uninhabitable.

This information is only available due to satellite monitoring of the island, with many square miles entirely inaccessible

Thankfully, officials are not expecting to evacuate anyone else given that new eruptions of lava are following the same routes to the sea as previous flows. 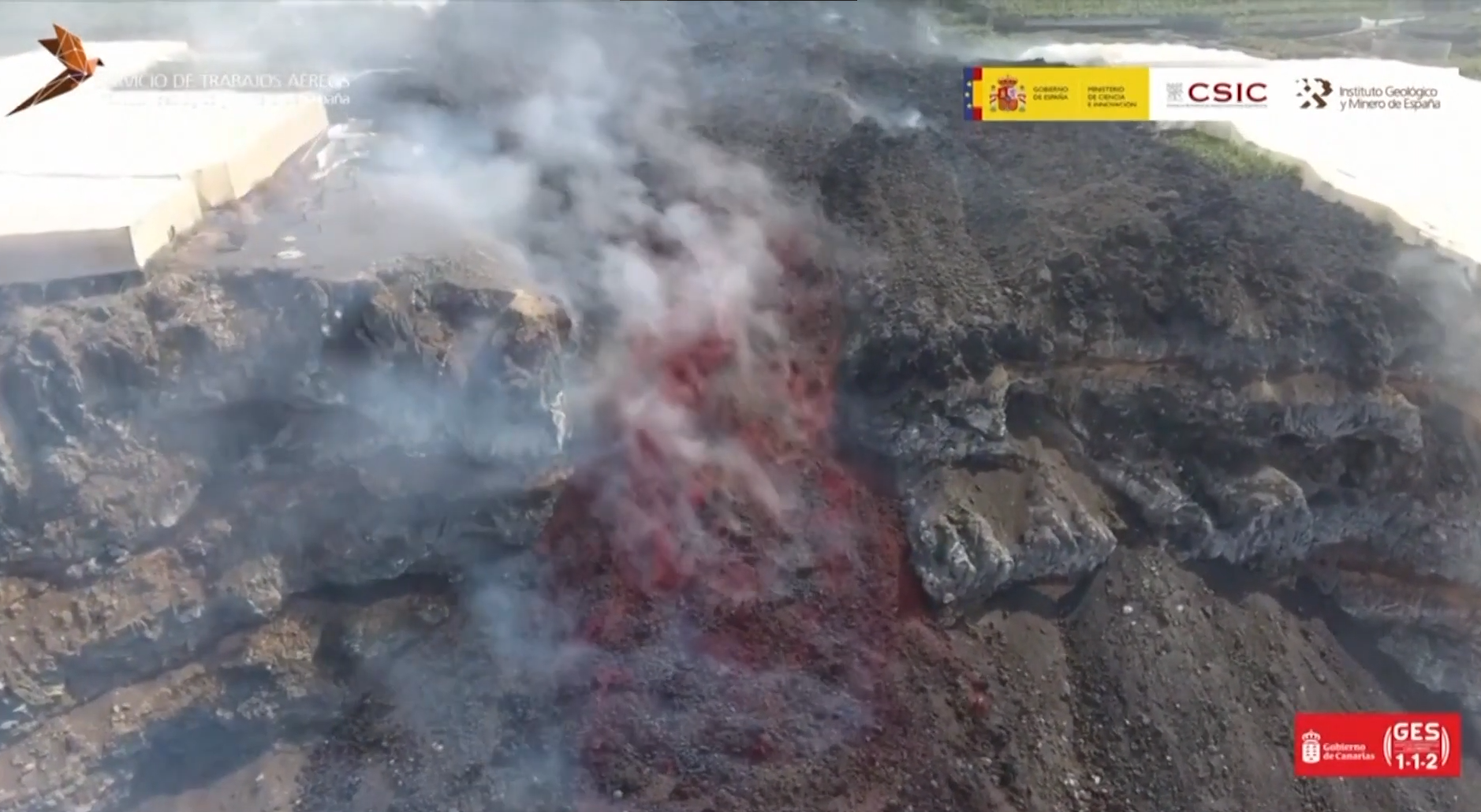 Residents have recounted their traumatic escapes from the oncoming destruction

Gert Waegerle was evacuated last week from the village of Tacande de Arriba. Prior to the disaster, he was leading a pleasant life with his turtles and cats. 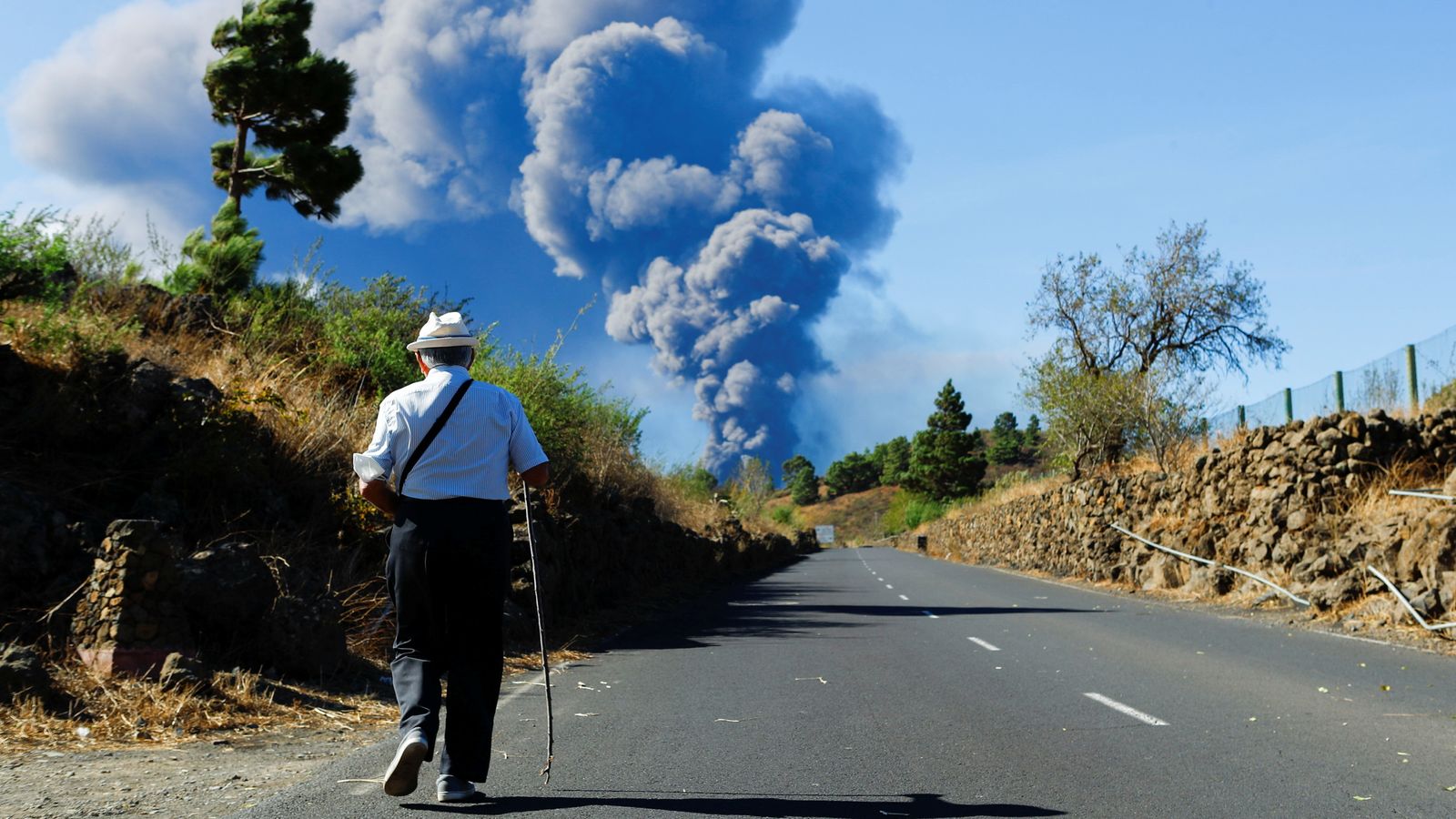 However, while he was able to escape the lava with his five turtles, he was forced to leave his cats behind…

“I am super happy because, in the end, everything turned out fine.”

Fortunately, on his return Waegerle discovered that his house had been unscathed by the magma. Better still, his cats were safe and well despite the commotion. 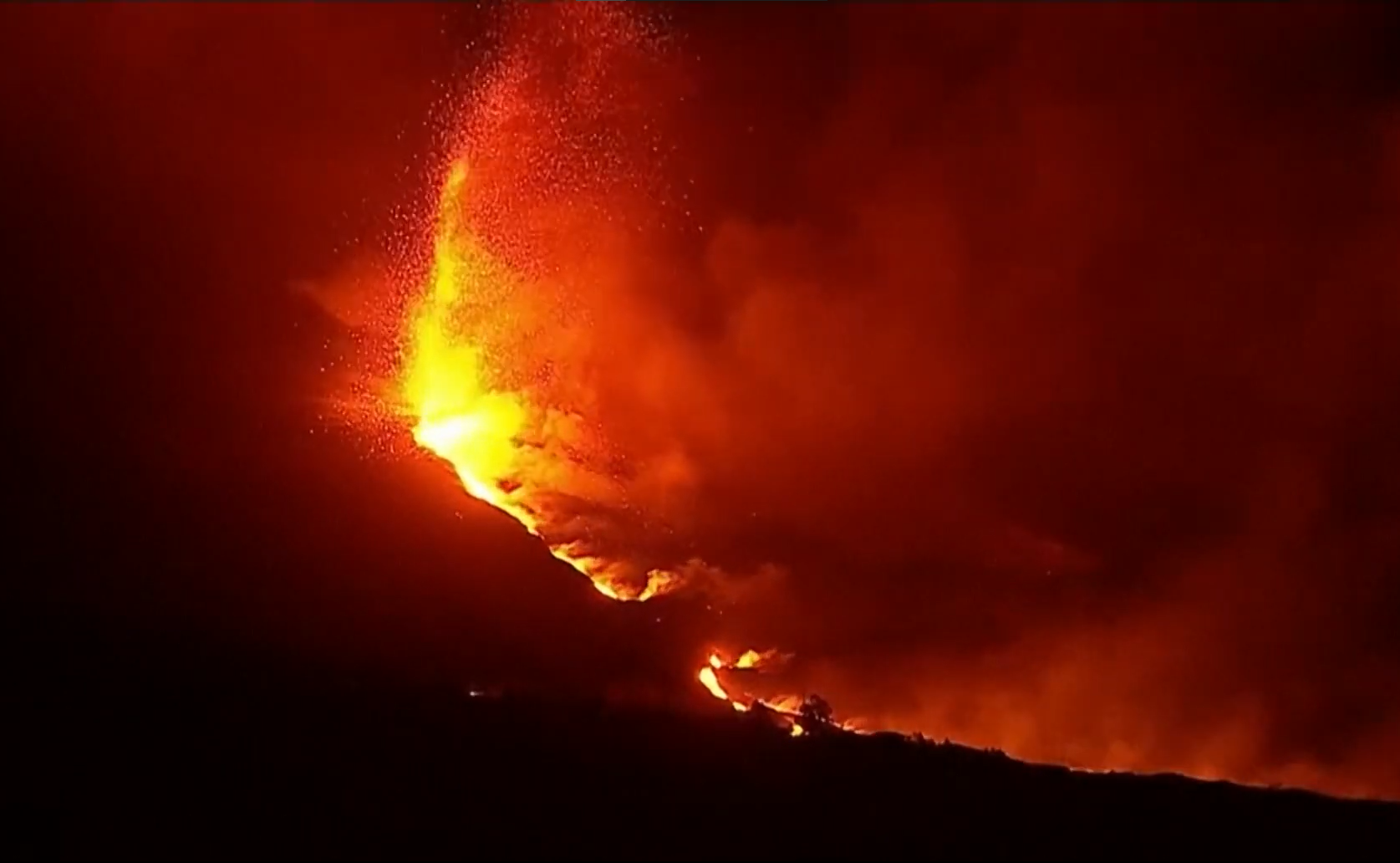 “I am super happy because in the end, everything turned out fine,” said the 75-year-old. “It’s a good feeling, a fantastic feeling.” Sadly, not everyone has been so lucky.

Watch the video below to see more on these terrifying eruptions.