Was The REM Fan Club The Best Fan Club Ever? 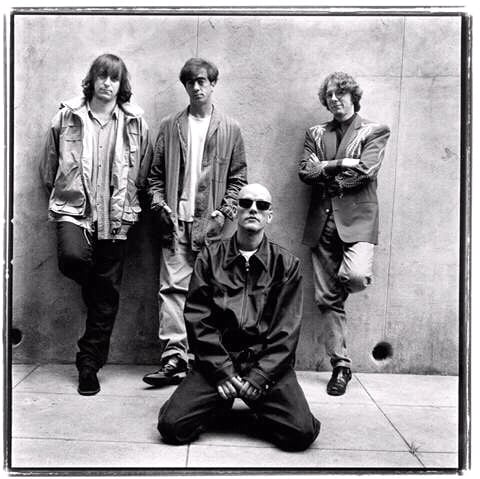 On 5th April 1980, at the very same Church, they did their first gig, at a friends birthday party.

After many choices for a name for the band, they settled on REM. Which Michael Stipe randomly selected from a dictionary. 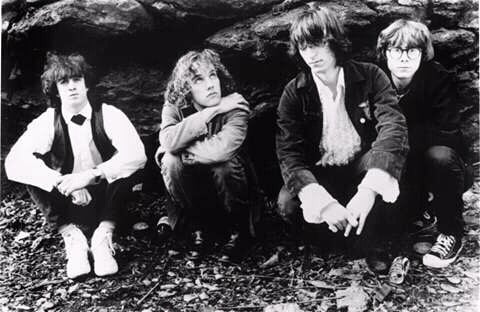 Their critically acclaimed debut album, Murmur, was released in 1983. That year they also made their first TV appearance on, Late Night With David Letterman.

Wisely they made the decision from the start that with every song all their names would be credited for it, it was all split in four, four quarters, a quarter each. So their pay was always equal. As money can become a huge arguing point within bands. 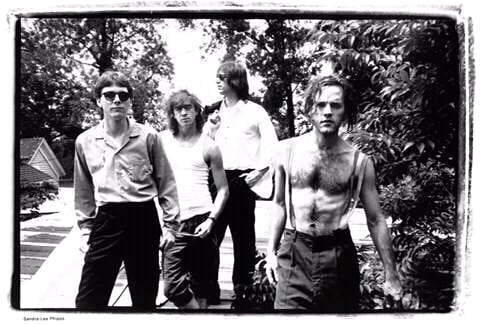 In 1988 REM hit the big time, and rightly so! They were snapped up by Warner Brothers Records, and they were playing large arenas.

When asked why they went with Warner Brothers, Michael Stipe replied, “Bugs Bunny!”

Bill Berry left the band in 1997, but Stipe, Mills and Buck continued as a three piece. In 2011, they called it a day. REM had released 15 albums, toured the world, many times over. They won tonnes of awards, and are inducted into the Rock n Roll Hall of Fame. With over 30 years of history, they leave a legacy of some of the greatest music ever made, their music will live on forever. 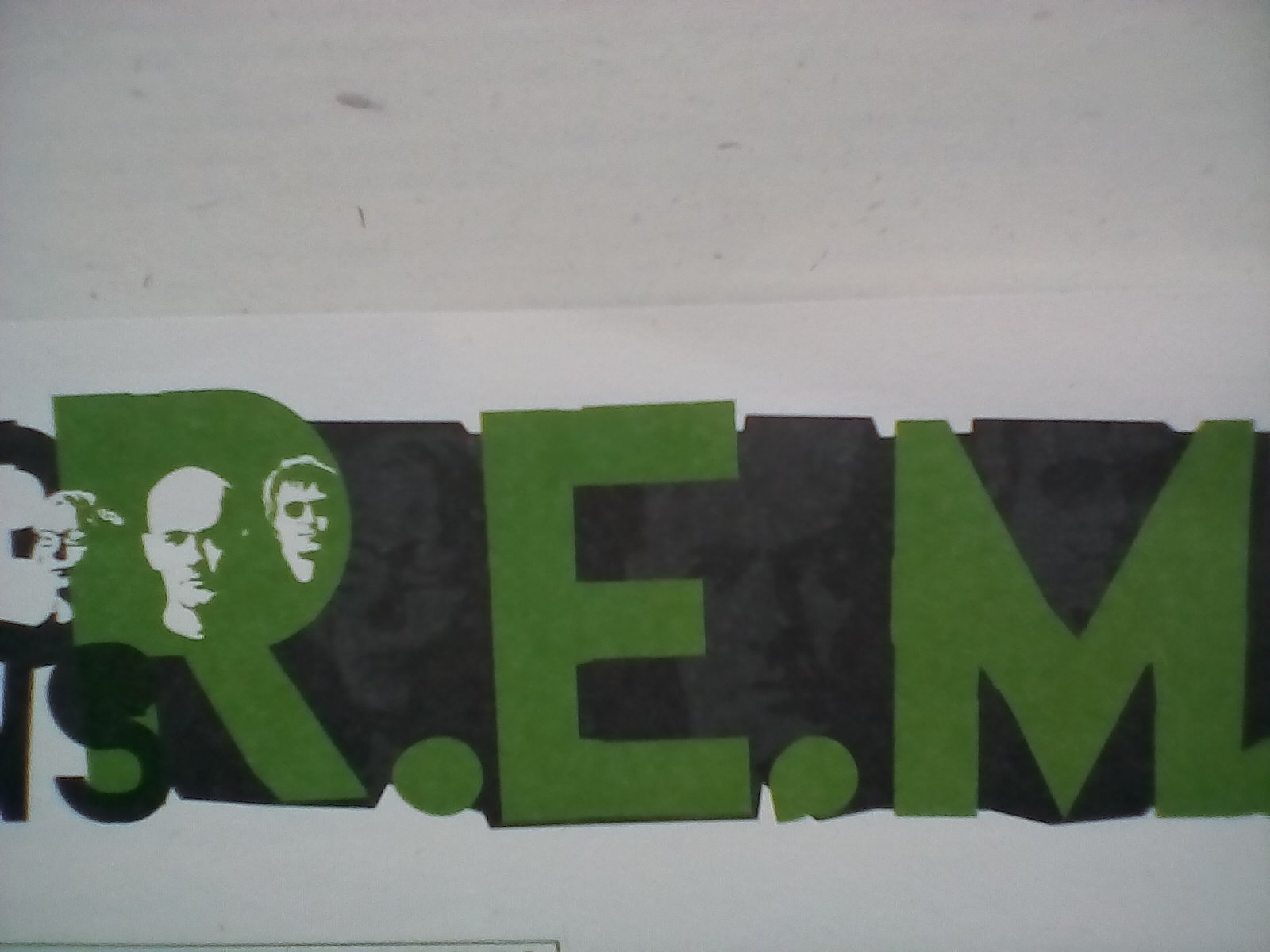 REM developed a fan base and a following from the very start. A loyal fan base which just grew and grew. Their fanclub started in 1984, it was ran from the REM headquarters in Athens, Georgia.

There was over 10,000 members, in over sixty countries around the world. Remember this was long before the days of websites. All the latest official news was in their fanclub news letters.

Throughout the year you would receive news letters, at Christmas time you received the annual holiday package. The generosity within the news letters and especially the Christmas packages was incredible. They certainly put so much thought into what the fans would receive, they never forgot their fans loyalty and constant support. What they gave back through the fanclub showed that. The fans were so important, and made to feel so too.

To join it was only $10 for the USA. The rest of the world, the cost was $12. This was for a twelve month membership.

Its been said many times that the REM fanclub was simply, the best! So what would you receive? 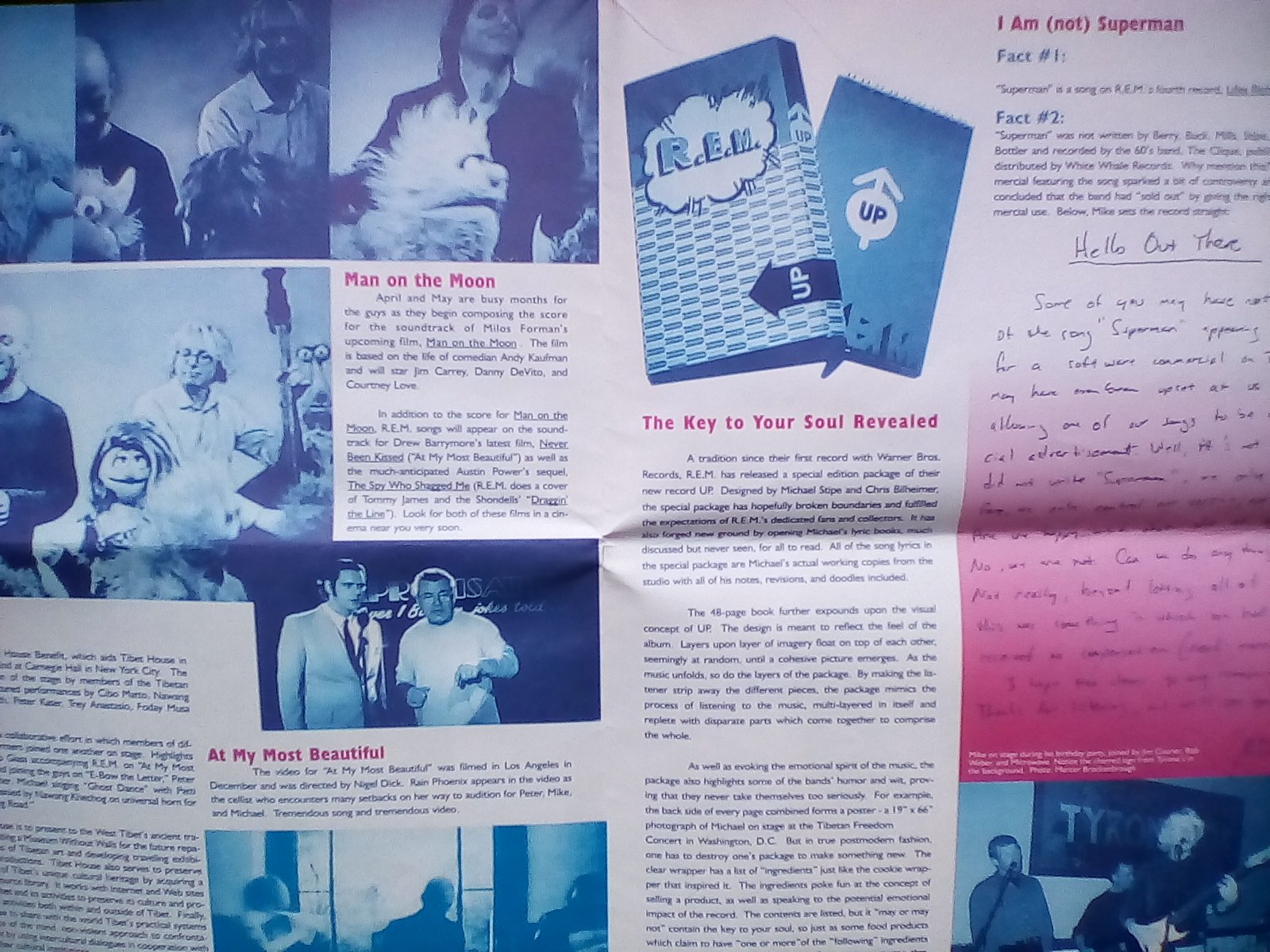 The news letters. Which were full of all the latest band news, single or album release dates, tour dates, TV appearances, charity work, band interviews, posters, hand written letters from band members were printed in the news letter, there was also merchandise. Just full of all the goings on in the world of REM!

The above news letter is from 1999. They had filmed a video, in Los Angeles, for, At My Most Beautiful, which featured Rain Phoenix (sister of River Phoenix). The song was also to feature on the sound track on Drew Barrymore’s then latest film, Never Been Kissed.

The band had also been composing the score for the Milos Foreman film, Man On The Moon. The film is based on the life of the comedian, Andy Kaufman, which starred Jim Carrey, Courtney Love and Danny DeVito.

Busy as always, they even managed to fit in a huge Summer tour, across Europe and North America. A 48 date tour, starting in Lisbon, Portugal, finishing in Mansfield, Massachusetts, USA. 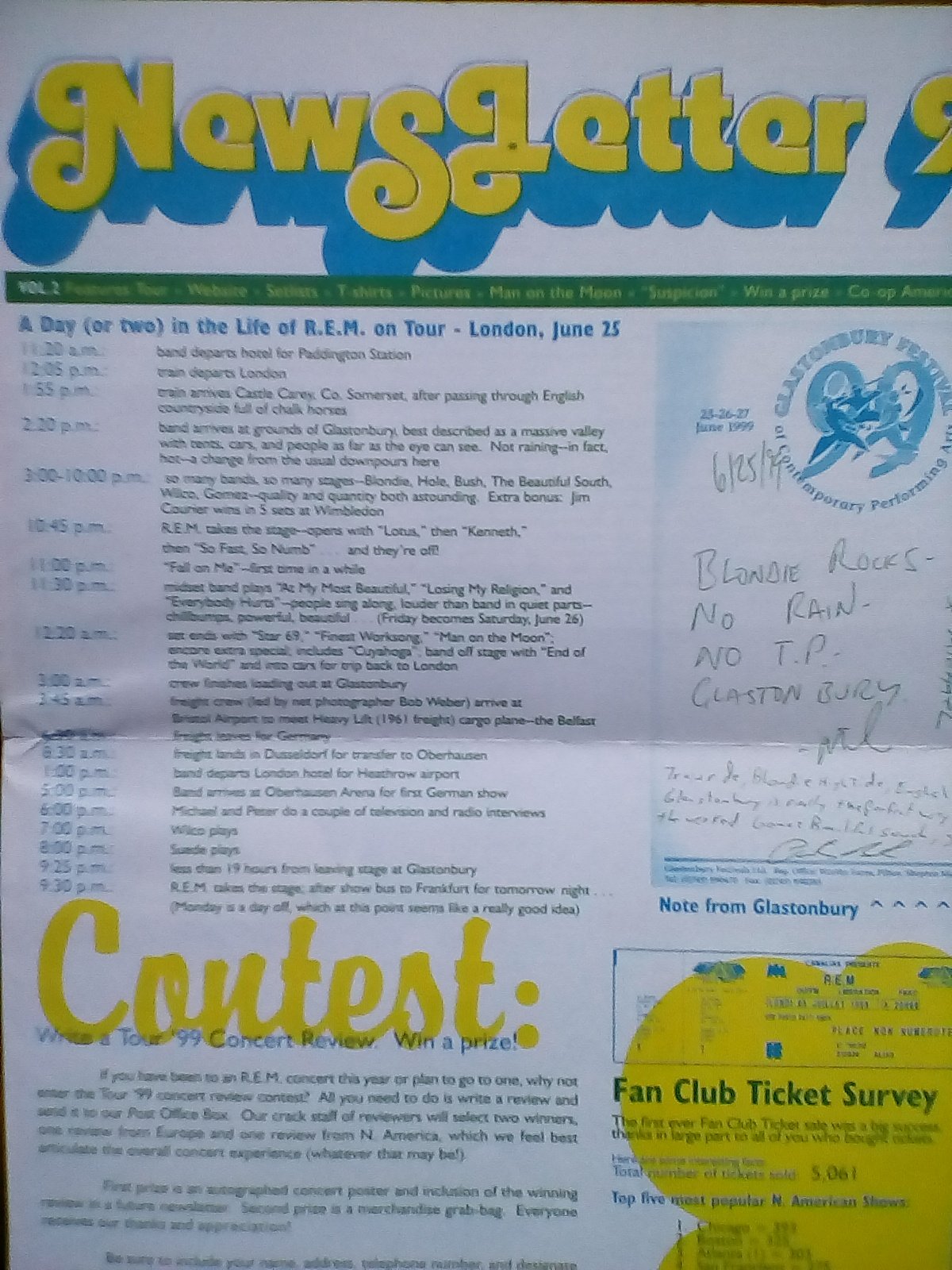 During their tour, they even managed to squeeze in headlining at Glastonbury. In this news letter there naturally is a page on Glastonbury. That year the Festival bands also included, Blondie, Hole, The Beautiful South, Wilco, Gomez.

REM took to the stage at 10:45pm, opening with ‘Lotus’, ending with ‘Man On The Moon’ at 12:20am. They rocked it! One of the best Glastonbury performances ever. Pure magic.

The next day they set off for Germany, less than 19 hours after leaving the stage at Glastonbury, REM took to the stage in Germany! 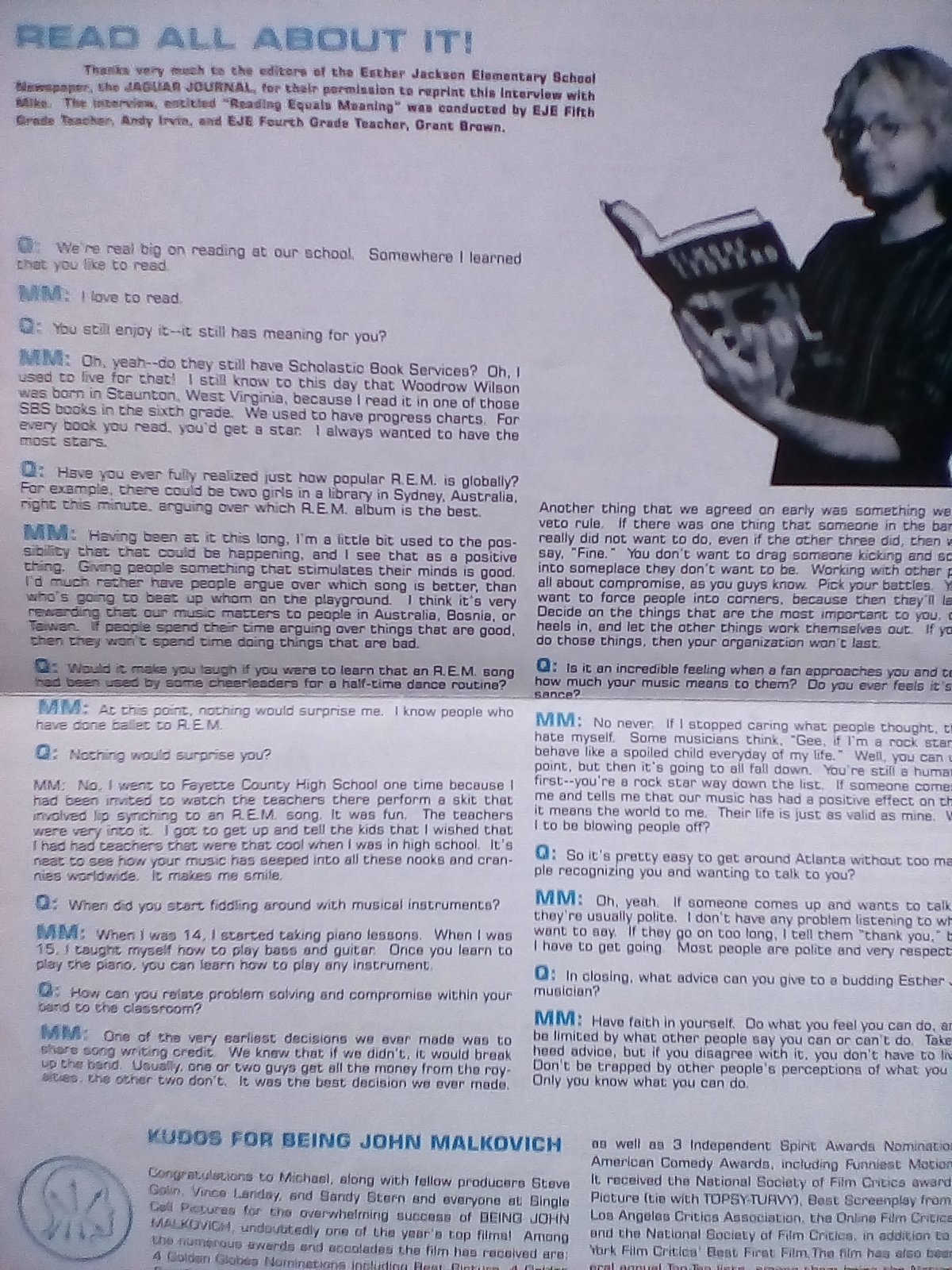 Here is a Mike Mills interview. Brilliant interview, he even gives advice to budding musicians, “Have faith in yourself. Do what you feel you can do, and don’t be limited by what other people say you can or can’t do. Take advice, heed it, but if you disagree with it, you don’t have to live by it. Don’t be trapped by other peoples perceptions of what you can do. Only you know what you can do.” 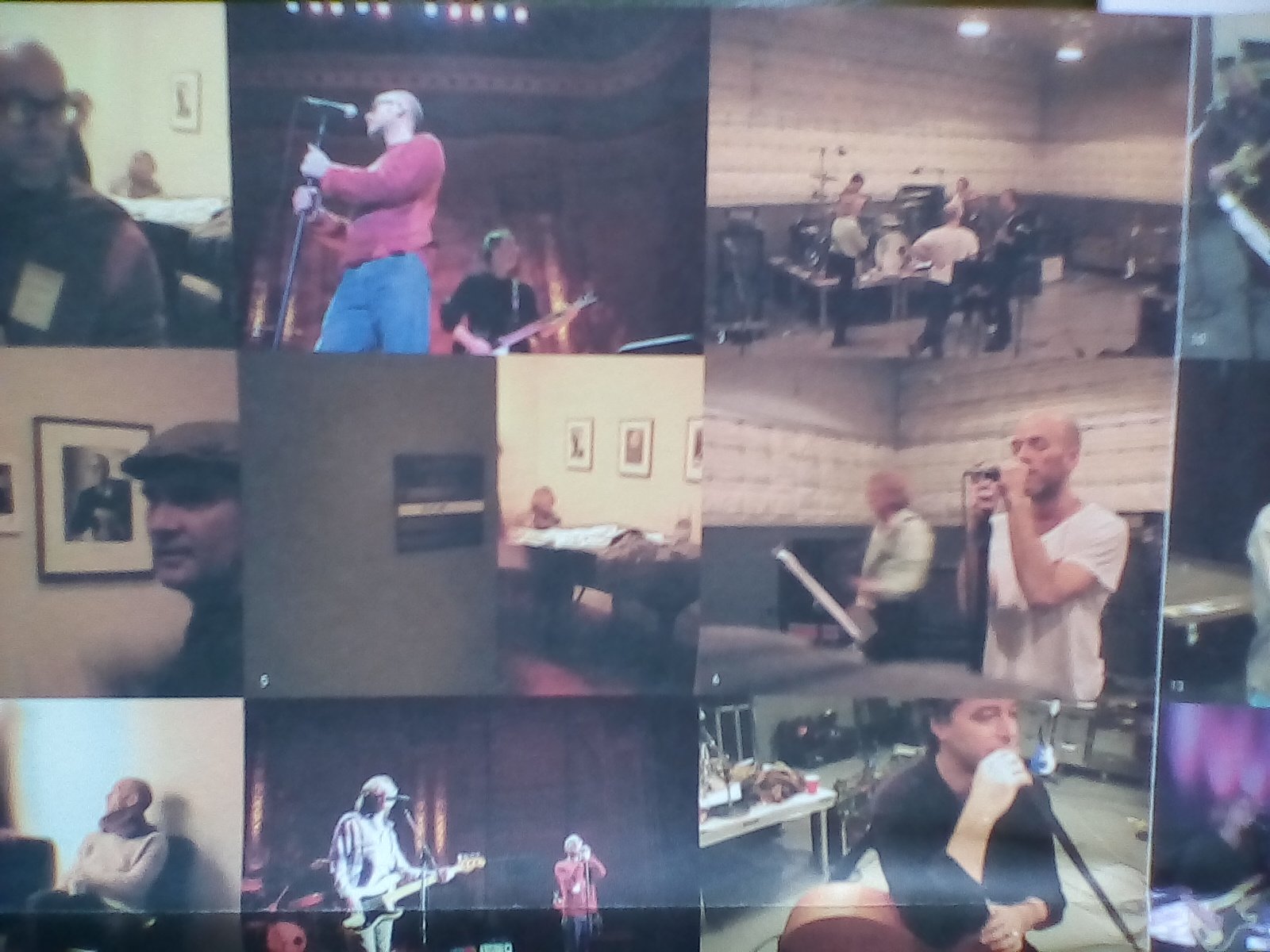 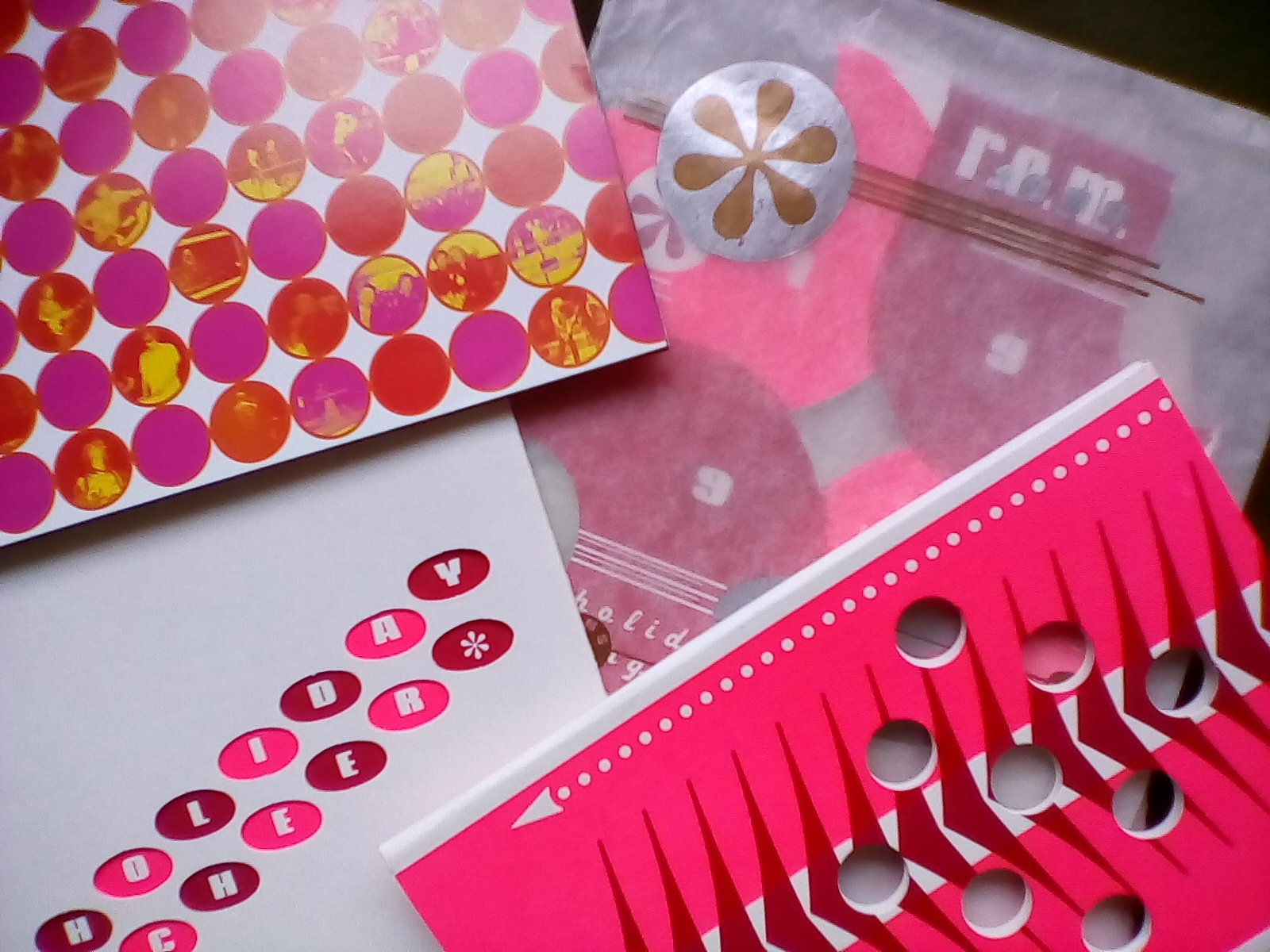 The annual Christmas packages. They really were special, a real Christmas treat. Every year it was exciting when the package arrived, and the fun of finding out what was inside!

In this package there was, a Christmas card, a Holiday Jingle CD, and a booklet full of exclusive photographs from their Summer tour. 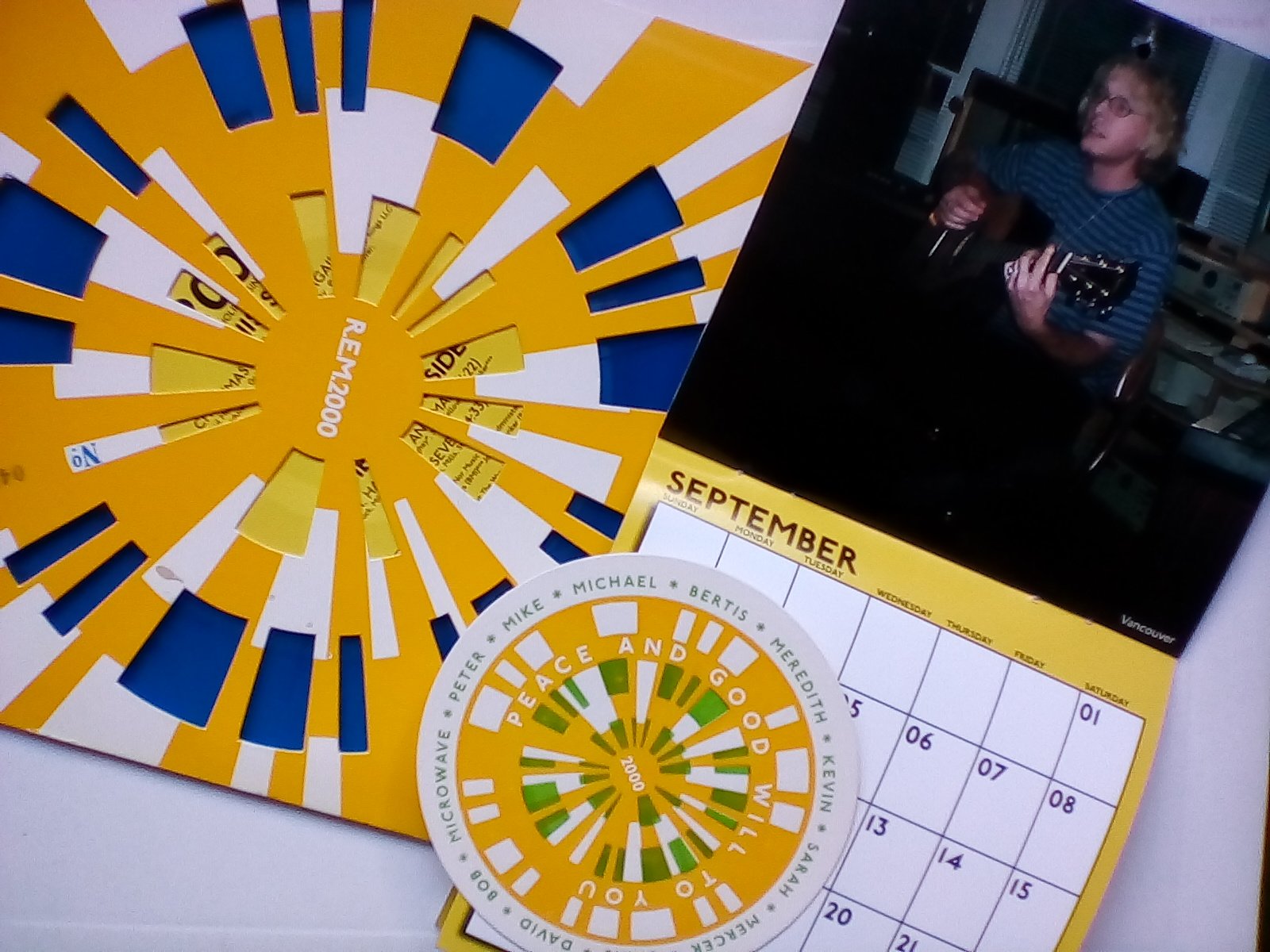 Yellow was the theme colour for this Christmas package!

It included a calendar, with exclusive photographs. Plus a Christmas record, which to make it even more exciting, the record was the colour blue!! 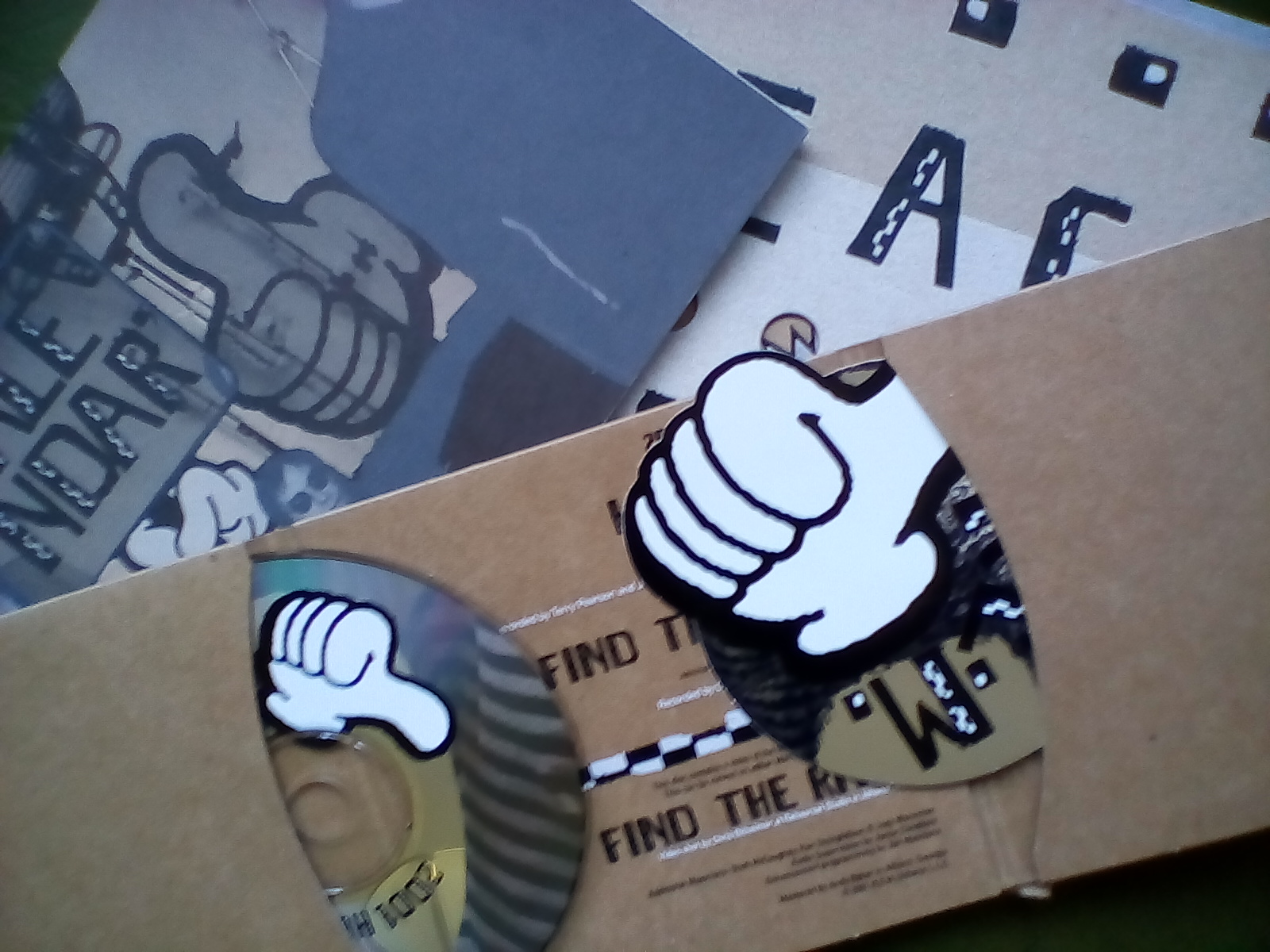 Inside this one, was a Christmas card, a calendar, all printed in one hundred per cent forest free paper. There was a sticker, and a CD of the holiday single, which also contained a band rehearsal video, of REM rehearsing Find The River. 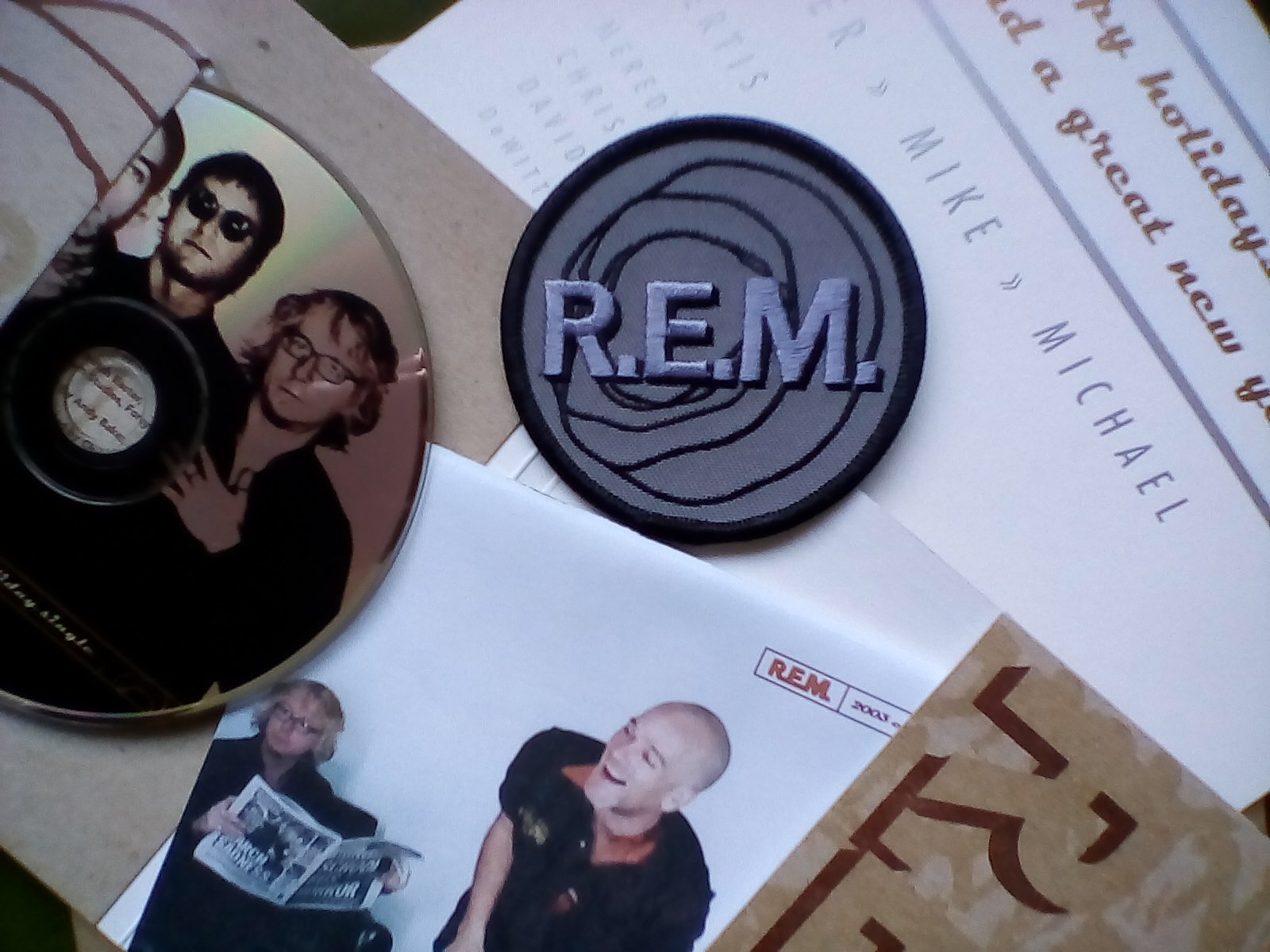 Another fabulous calendar with exclusive photographs was in this Christmas package, along with a holiday single CD, a Christmas card and a sew on badge. 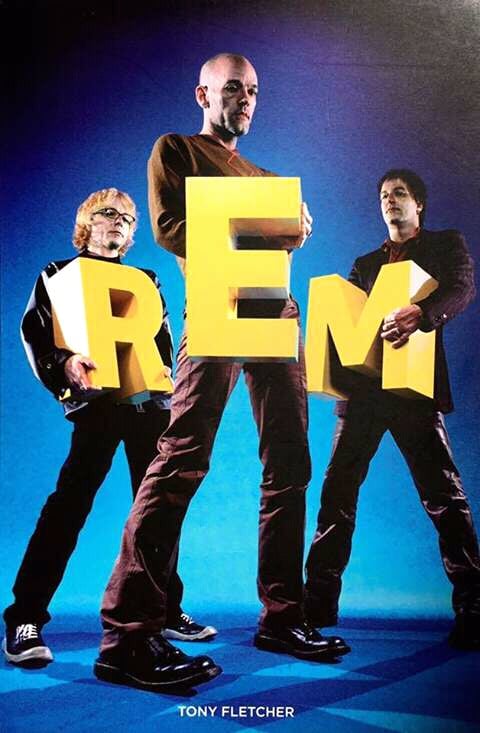 Was REM the best fan club ever? I am a huge music fan and I have been in many fan clubs over the years, none of the others showed anywhere near the generosity which REM did. Often with a fan club you would receive a piece of A4 paper with band news on! But REM were just on the next level, always something new, always something interesting, something exciting. I don’t think any fan club has ever beat that!