Way back in 1937, Walt Disney made history when he released Snow White and the Seven Dwarfs, the world’s first-ever feature-length animated film.

The classic fairy tale adaptation instantly made a huge splash, with people paying the equivalent of $130 for tickets to advance screenings, and it made back an astronomical $418 million on a $1.49 million budget.

As the success of the film filtered through the ranks of Walt Disney’s Burbank studio, it came with the news that two more Disney animated features were immediately being rushed into production.

A new crop of young, freshly graduated animators flooded the studio to help shoulder the new workload, but the excitement was not enough to outweigh the crunch that both the Disney old guard and the new hires would soon be feeling. 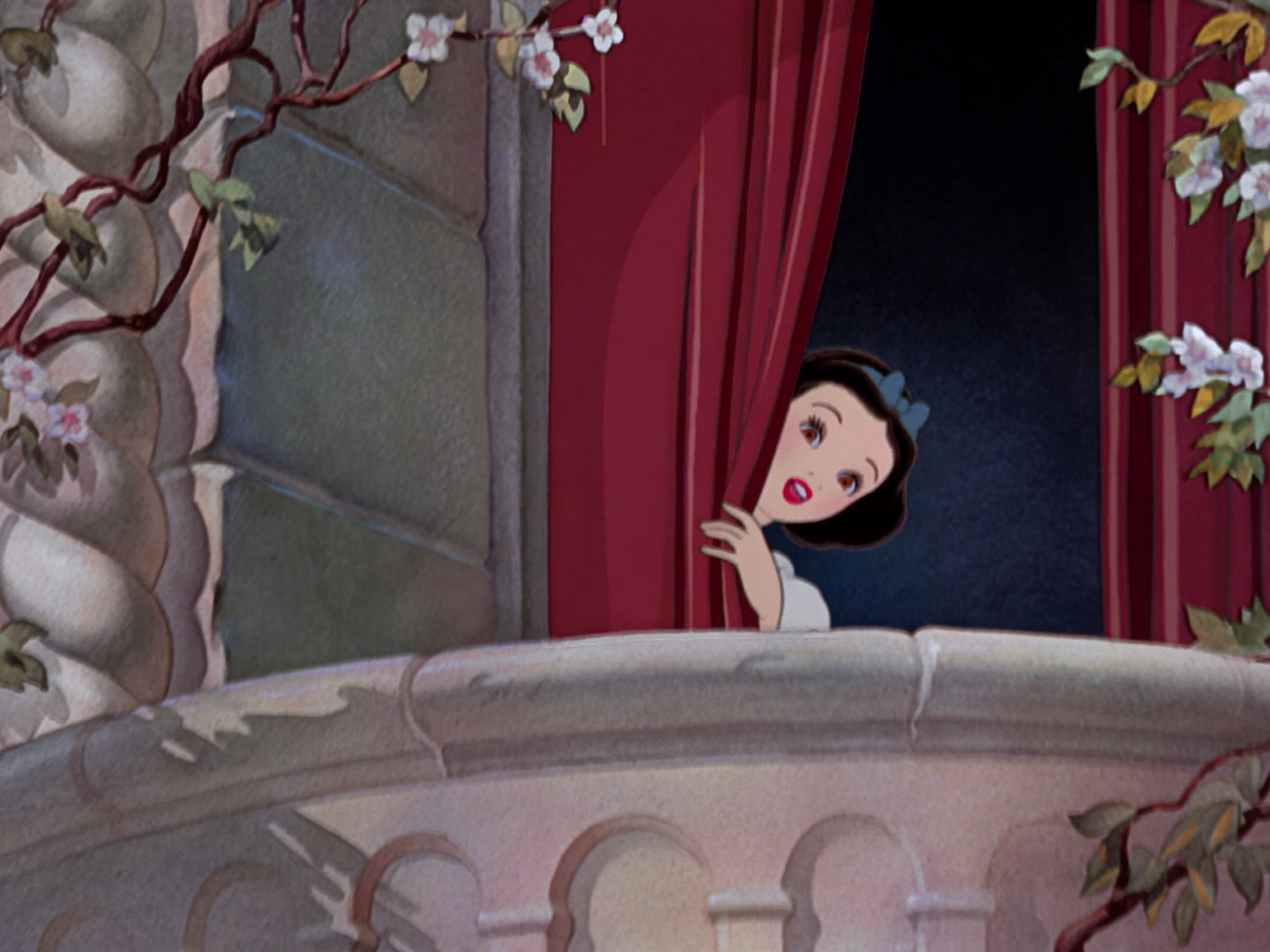 Realising that his staff were feeling the grind, Walt Disney came to the conclusion that there was only one thing guaranteed to boost morale: a company party; specifically, a company field day.

A field day was an old-school term referring to a day of outside sports competitions, culminating in a picnic and the giving of prizes. It seemed like the perfect way to allow the staff to relax in the California sun with their spouses, in a way that was in line with Disney’s family-friendly image.

Naturally, the Norconian Resort, perhaps the most glamourous hotel complex in California, was chosen as the perfect venue.

Built in the golden age boom of the 1920s, the resort boasted a golf course, stables, a lake and marina, a huge outdoor pool with diving boards, and a ballroom. In short, it was one of the most upscale venues in the state and was the obvious place for 1,400 Disney employees to blow off steam. 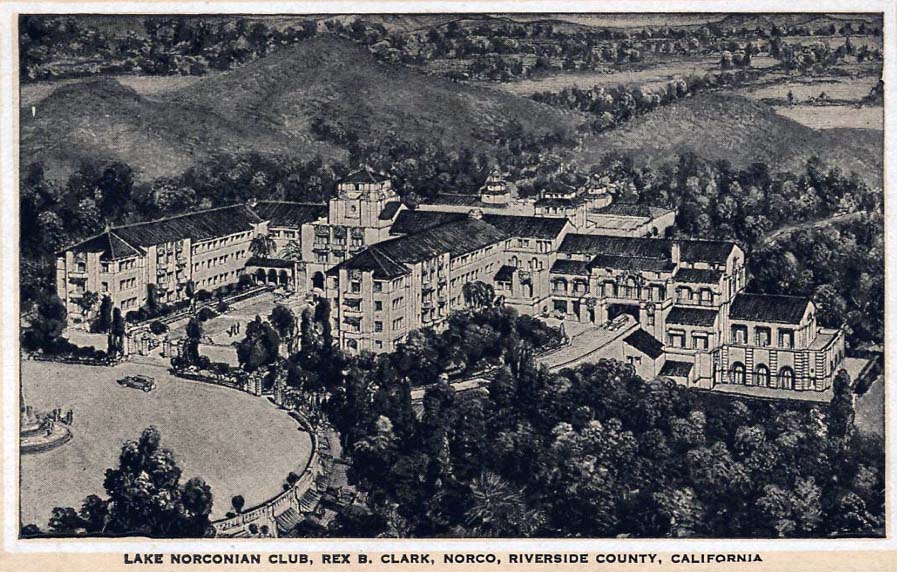 Before long, a memo was circulated around the Burbank studio from Walt Disney himself, detailing the specifics of the field day.

The wholesome flyer encouraged animators to leave the alcohol at home, and enjoy discounted hotel rooms, a reasonably priced bar and optional recreation after a day of company-building sports activities.

Walt’s idea of the idyllic outdoorsy sports day was appealing to Disney’s old guard of animators, who were mostly middle-aged and married with children, but it soon became clear that both the new graduates and the young ‘Ink and Paint’ girls had other ideas about how to celebrate Snow White’s success.

A few days later, another memo was circulated, this time a joking film treatment which poked fun at the old-fashioned language Walt had used. One line specifically advertised an “old fashioned picnic – field day – strawberry festival – quilting party – or name it!” 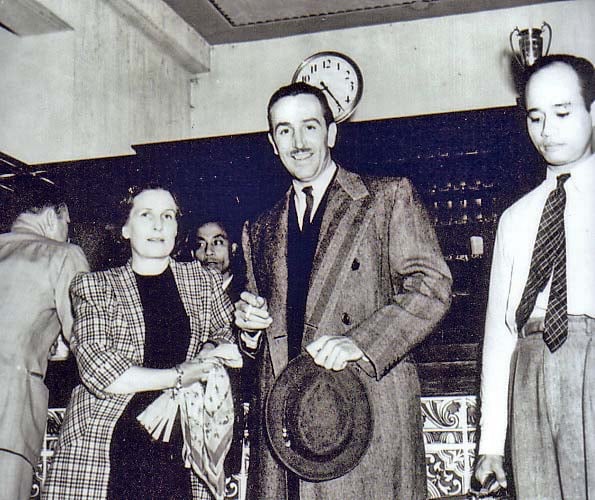 The memo also got to the heart of what most of the younger animators were excited about, namely the opportunity to drink and flirt copiously.

At the studio, staff were divided by their gender and relationship status, with single male pencil artists working separately from the single Ink and Paint girls.

Walt’s field day offered a rare opportunity for the groups to mix, and the excitement was palpable. A cheeky note at the end of the flyer read:

“Married couples within the studio, we’re sorry to say, should consider each other as their one guest for the day. In other words, it serves you right.” 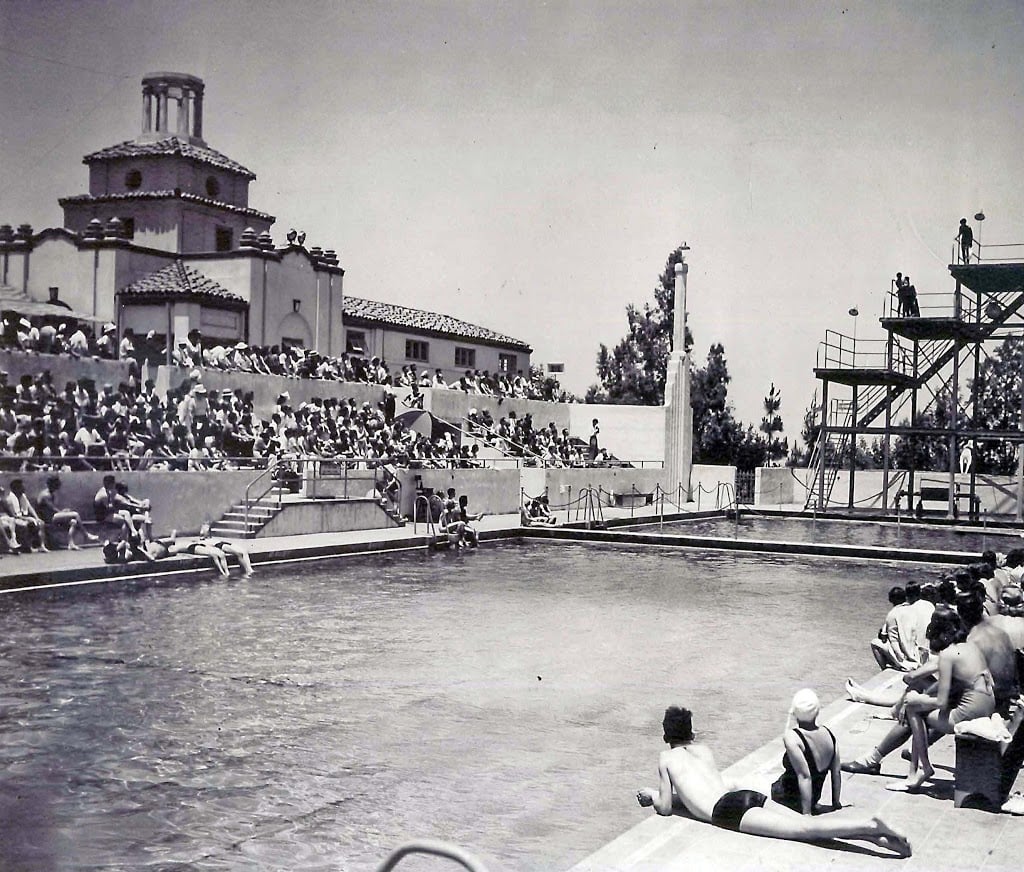 Despite many of the young employees looking forward to a weekend of raucous debauchery, the daytime activities went off without a hitch. The staff participated in swimming relay races and golf tournaments and were treated to a professional diving demonstration by a stunt swim team.

Walt’s brother Roy Disney was particularly enamoured with the games and competitions and gained a reputation for being an excellent sport. Of course, after the games came the company picnic, where the drinking really began in earnest.

By the time that Walt arrived in the evening, things had already gotten out of control. One animator fell into the pool in a drunken stupor, and was put to bed swiftly afterwards to avoid any further embarrassment.

Another animator picked up an Ink and Paint girl and threw her in the pool fully clothed, which was followed by a handful of other Ink and Paint girls jumping in. Meanwhile, another young animator had taken one of the rental horses from its stable, and had ridden it all the way into the hotel lobby, with some accounts even saying that he rode the horse up onto the second floor, and then out into the pool. 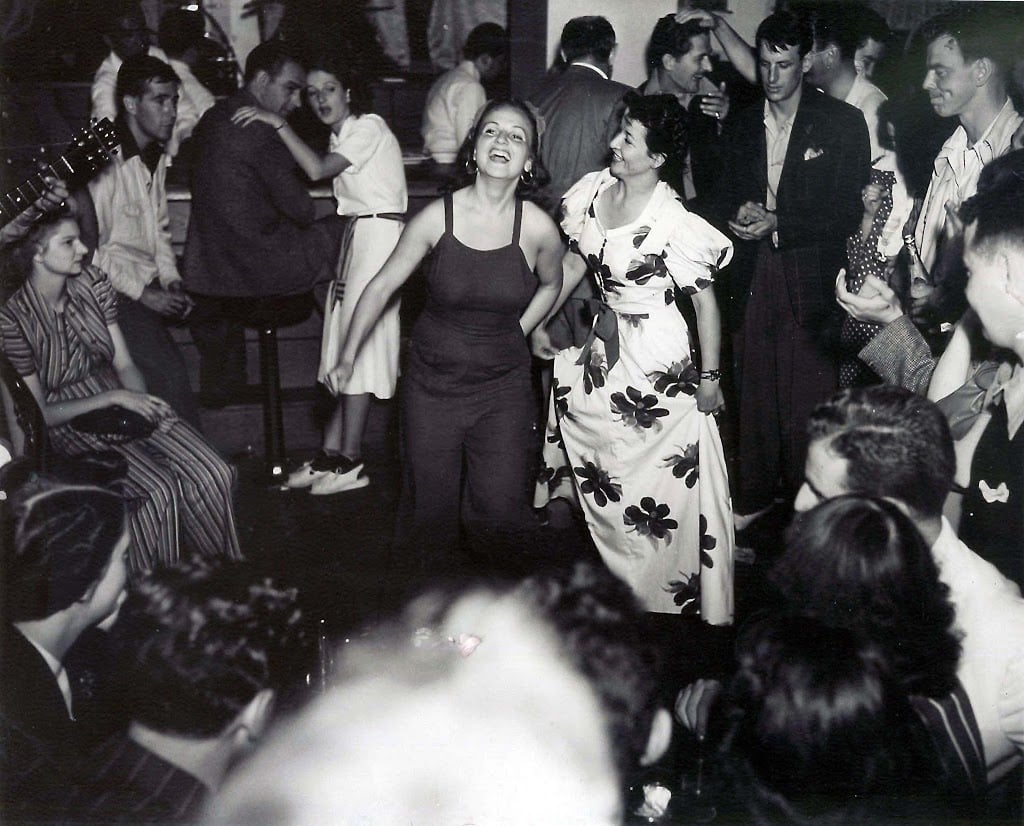 The horse was not the only animal to get roped into the festivities either, as a couple of Ink and Paint girls found some donkeys tied up in a nearby field and rode them onto the hotel grounds.

As the menagerie grew outside, Walt Disney sat drinking with his closest friends inside the ballroom, unaware of the prank that was about to be pulled on him.

Senior animator Art Babbitt convinced a police officer to jokingly tell Walt Disney to keep the noise down, but the prank didn’t go the way he expected.

Rather than sheepishly apologising for the chaos, Mr Disney allegedly yelled at the police officer right back, insisting on taking his badge number and shouting that he would get him fired! 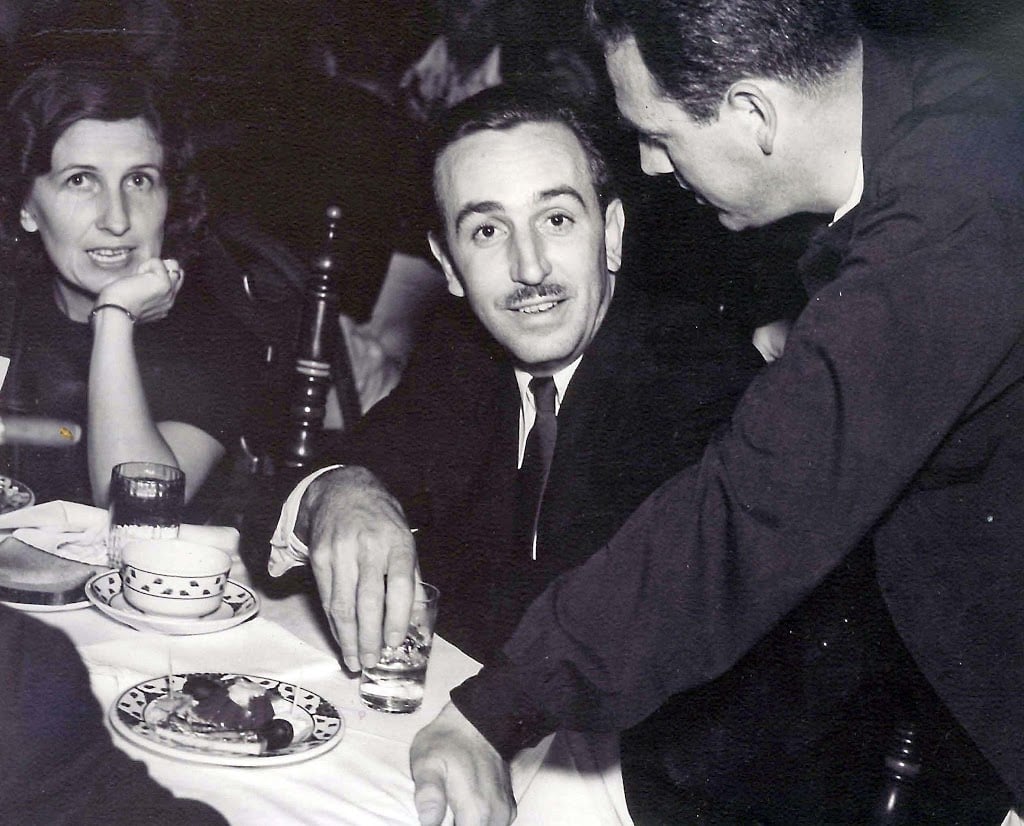 As night fell, many of the older animators took their leave, or at least have since claimed that they retired to their rooms before things got really crazy.

After the 11pm dance competition, which devolved into a group conga line and performance of the risque dance the Big Apple, Walt took to the stage to thank everyone for their hard work on Snow White.

Following his exit, men and women began to pair off into empty hotel rooms, and the pool was full of totally naked skinny dippers, men and women alike.

Amongst the older married animators, there was talk of swapping wives and hotel room keys, which scandalised some of the more honest family men. 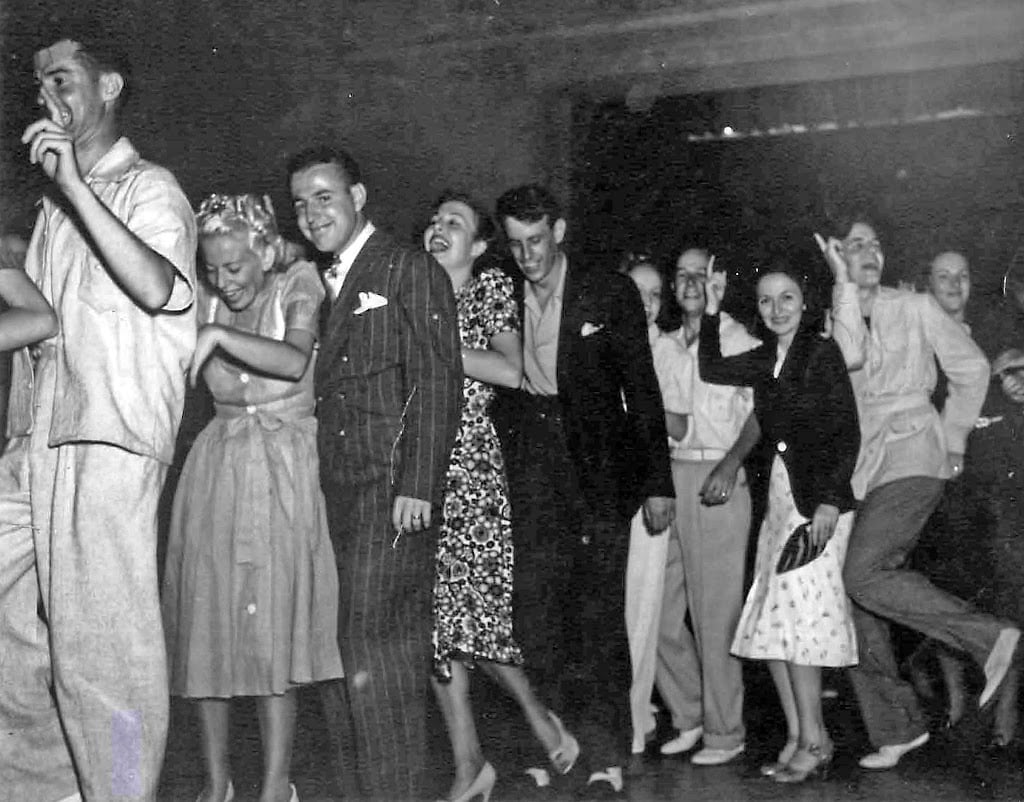 The party atmosphere went from bad to worse after a senior animator fell out of a second-story balcony and into a tree, before shaking himself off and returning to the ballroom to keep dancing.

Walt Disney left with his wife, apparently stony-faced, and refused to speak of the party ever again, completely embarrassed by the behaviour of his employees. When the hungover masses of animators shuffled into work on Monday morning, they quickly learned not to speak of it either, at least if they wanted to keep their jobs.