It may be a small nightspot with a capacity of only 250, but The Viper Room achieved worldwide fame in the 90s as a hub of Hollywood’s Generation X superstars. The club’s recognition initially owed a lot to the fact that it was owned by one of the most esteemed new stars of the time, Johnny Depp. The club attained infamy, however, as the site of River Phoenix‘s fatal overdose in 1993 – but this was by no means the only shocking thing to happen in the venue in its long and chequered history.

Situated at 8852 Sunset Boulevard on West Hollywood’s celebrated Sunset Strip, The Viper Room began life as a humble grocery store before being converted into a nightclub in 1946. It changed hands and took on various different incarnations over the years, including a stint as a strip club owned by mobster Mickey Cohen. 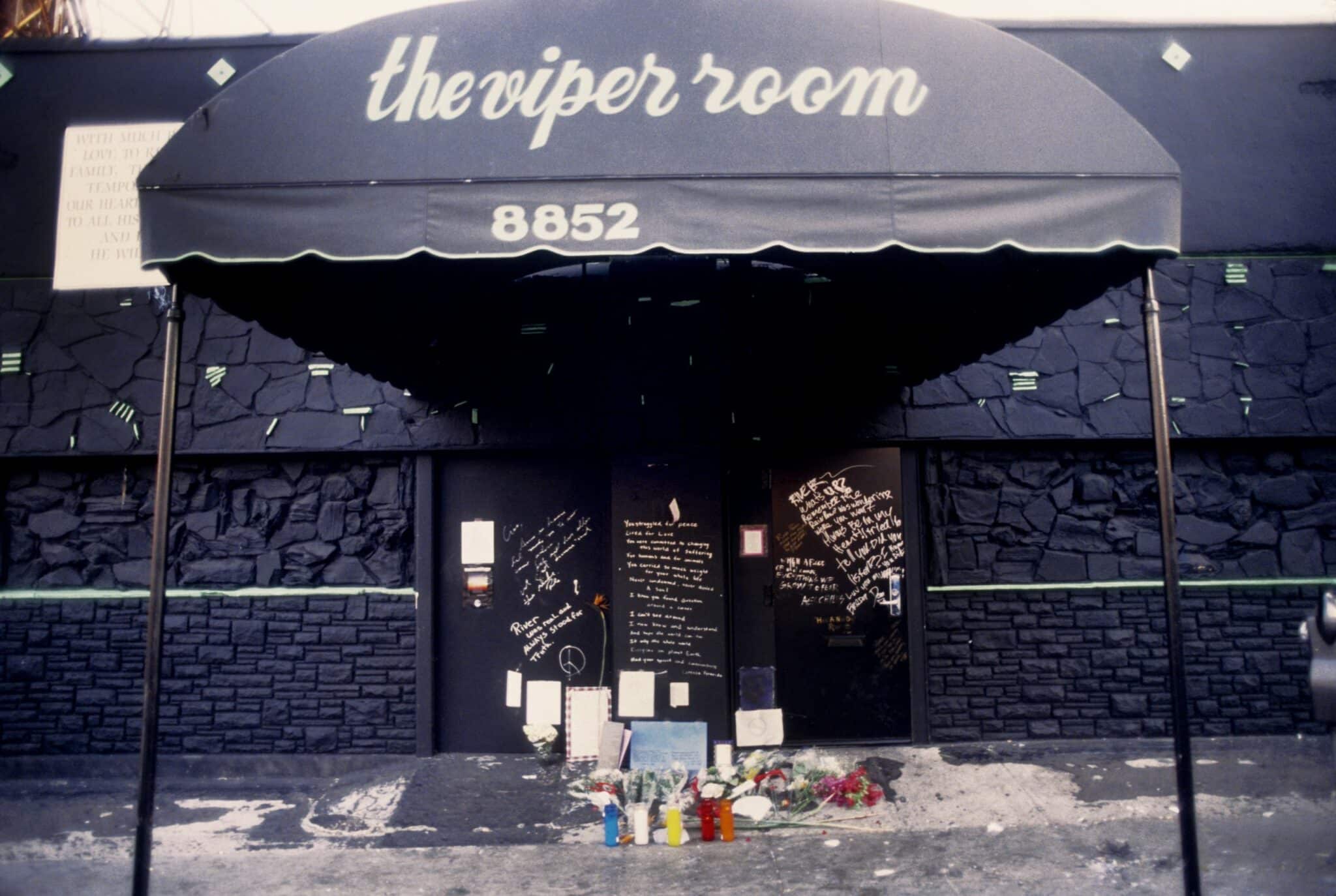 Going through numerous name changes ranging from The Melody Lounge to Filthy McNasty’s, by the late 80s the club had become known as The Central, and was struggling financially. Around this time, it was purchased by Johnny Depp and his 21 Jump Street co-star Sal Jenco.

The club re-opened its doors as The Viper Room on August 14th 1993. Depp’s star power went a long way: the actor was able to hire Tom Petty and the Heartbreakers to perform on their opening night, assuring a lot of press attention and quickly making The Viper Room the talk of the town.

From the offset, The Viper Room set its sights on bringing in Depp’s contemporaries; the new generation of actors, musicians and artists who wanted a place of their own to hang out. 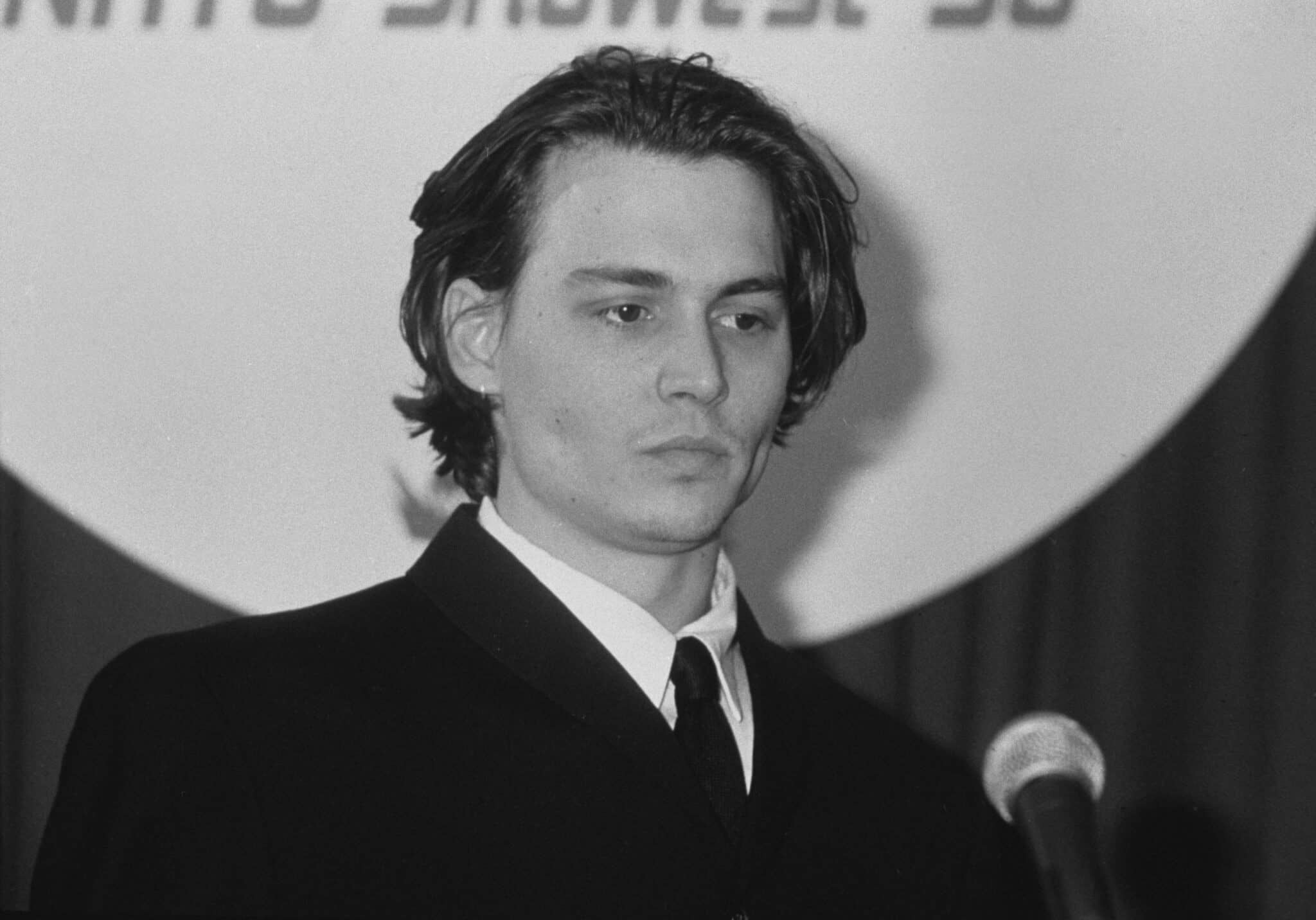 Writer Pleasant Gehman recalls that the clientele “were hanging out there trying to elude fame. Johnny Depp was making a valiant attempt to protect the young and famous up-and-coming arty A-listers. He wanted to create a haven for them.”

However, barely three months after opening, The Viper Room was brought to the attention of the entire world under tragic circumstances.

Actor and musician River Phoenix was in attendance at The Viper Room on Halloween 1993 when he collapsed on the sidewalk outside, and died in hospital shortly afterwards. The cause of death was ruled as multiple drug intoxication. 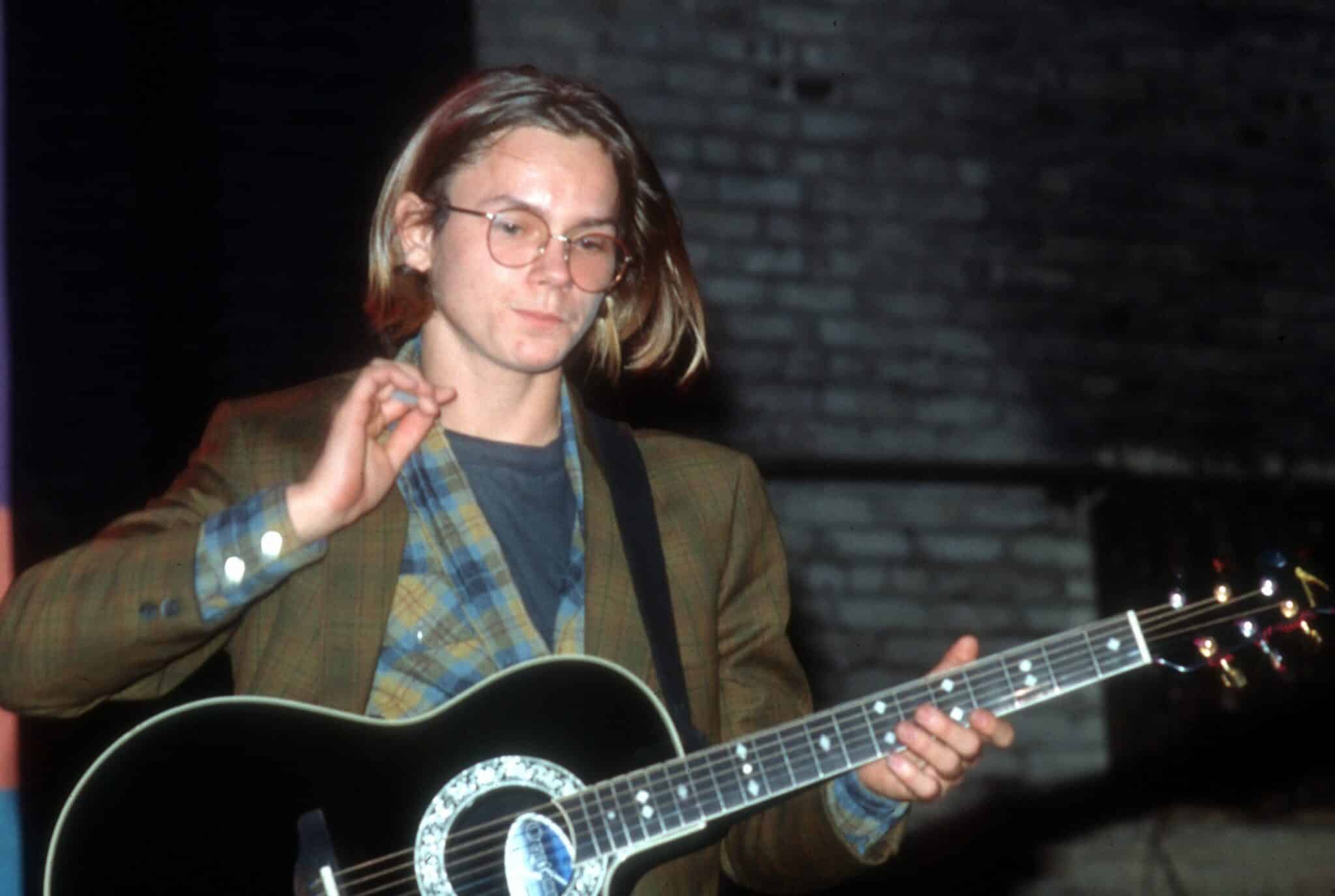 Phoenix’s death left the world shocked and heartbroken, and Depp was among those left distraught. Under Depp’s orders, The Viper Room did not reopen for a week, in which time it became a shrine to Phoenix.

For all the years that Depp remained an owner of The Viper Room, the club would be closed every October 31st as a sign of respect to Phoenix.

Given that Phoenix was killed by drugs he took whilst in The Viper Room, it wouldn’t have been too surprising if the club’s fortunes had suffered afterwards. In fact, after Phoenix’s death the club only went from strength to strength, its newfound notoriety seeming to only boost its reputation as a celebrity hangout spot. 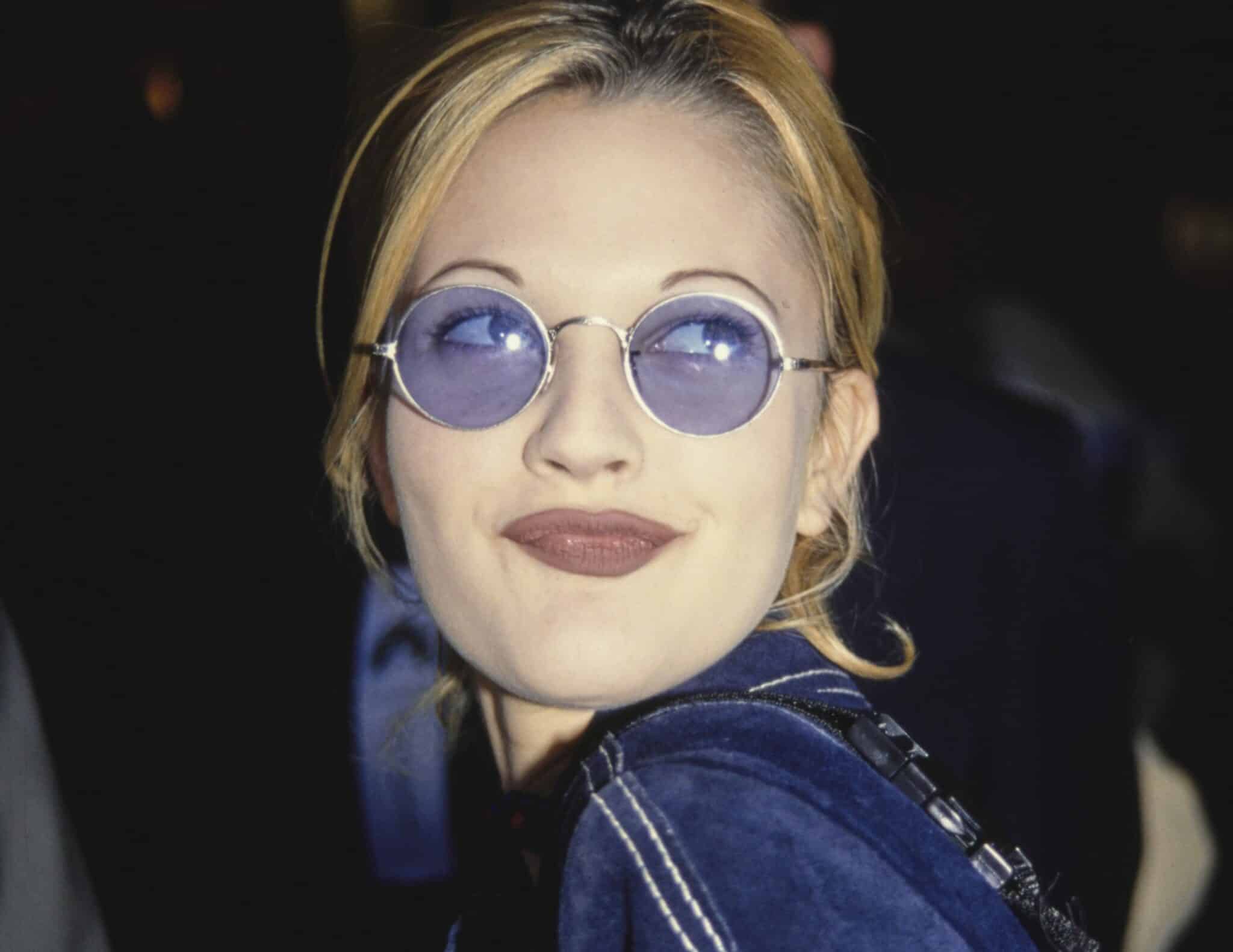 Viper Room’s celebrity guests ranged from Drew Barrymore to Jerry Springer. It provided a launchpad for acts including the Pussycat Dolls (who were often joined onstage by such stars as Gwen Stefani and Carmen Electra), and Jack Black‘s band Tenacious D.

They even had a celeb tending bar: Adam Duritz, lead singer of rock band Counting Crows. Even though he had a platinum-selling band, Duritz took a job at the Viper Room post-fame in order to “feel normal and do his thing,” according to fellow singer Mark McGrath (Sugar Ray).

The Viper Room was also home to an illicit high stakes poker ring with famous players including Matt Damon, Ben Affleck, Leonardo DiCaprio and Tobey Maguire (the story of which was the inspiration between 2017 movie Molly’s Game).

As with any number of night spots, spirits ran high in the Viper Room, and at times violence broke out – but given the profile of the clientele, these altercations made headlines. 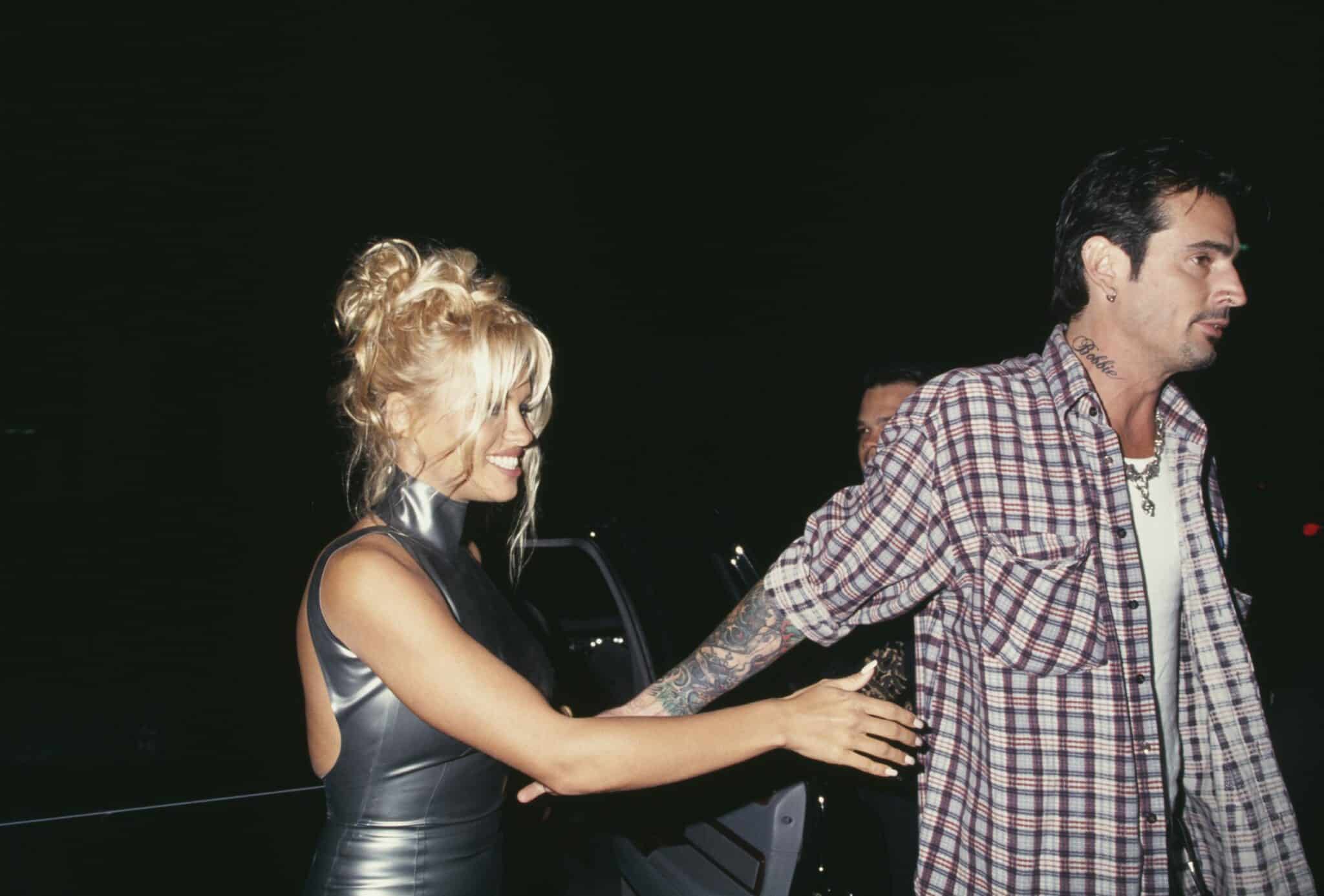 Only a few months after River Phoenix’s death, actress Nicole Eggert of TV’s Baywatch got into a fight with another woman over a man.

Eggert’s more famous Baywatch co-star Pamela Anderson was also a Viper Room regular. She too made the gossip columns there after her husband Tommy Lee attacked a cameraman outside the club, and wound up being charged with assault and battery.

Another photographer wound up successfully suing the club after taking a picture of Rolling Stones legend Mick Jagger embracing actress Uma Thurman, only for Viper Room staff to wrestle him to the ground and take the camera. 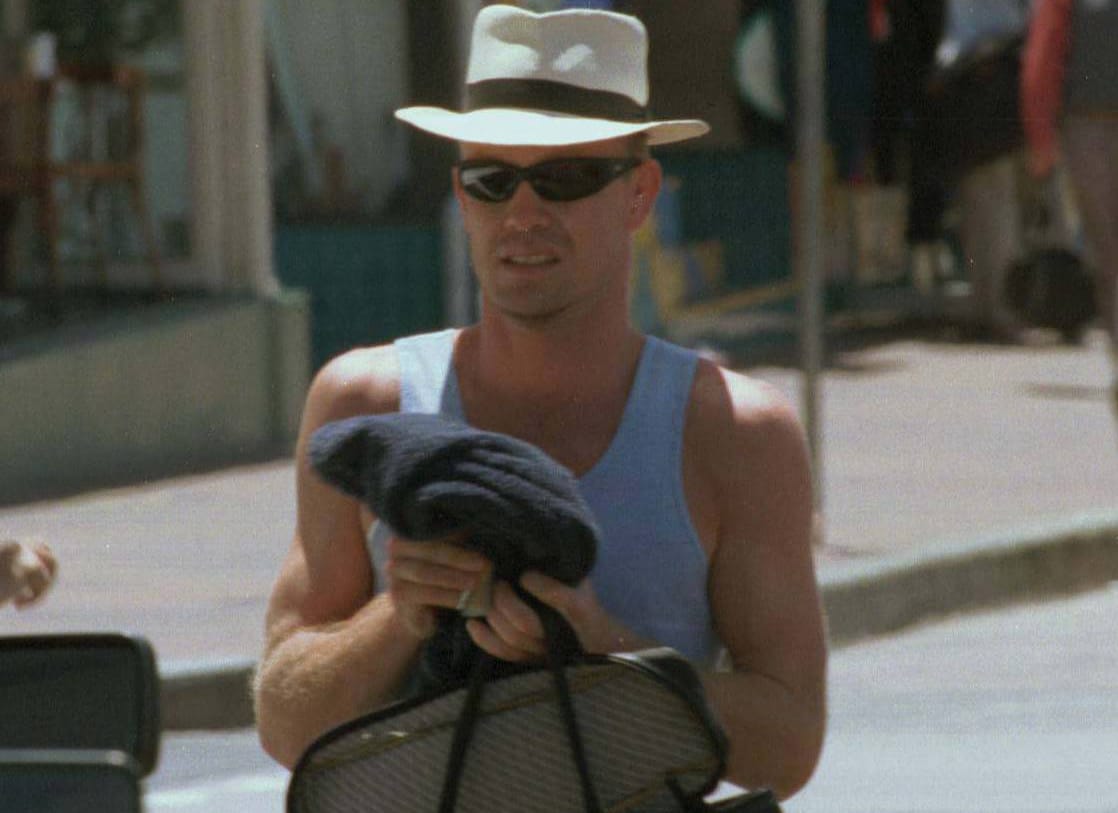 Through it all, the club seemed to remain a magnet for serious misfortune. Supermodel Kate Moss (Depp’s girlfriend at the time) threw her 21st birthday party there in 1995, and among the guests was Australian actor and singer Jason Donovan, who was heavily using cocaine at the time.

Whilst at The Viper Room, Donovan overdosed and suffered a near-fatal seizure. He recovered, and in the years that followed was ultimately able to kick his drug habit, but his career has never returned to its earlier heights. 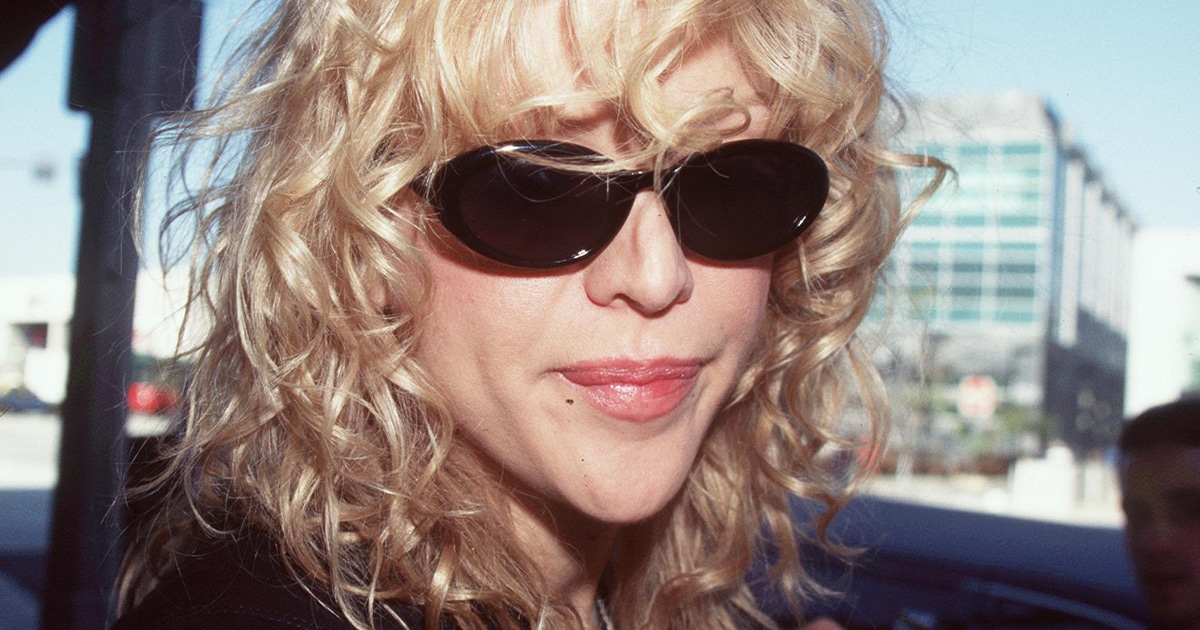 Also a Viper Room regular in the 1990s was Courtney Love, lead singer of rock band Hole and, by 1994, widow of Nirvana’s Kurt Cobain. Like many of her peers, Love has struggled with drug problems, and has admitted to once overdosing at the Viper Room, where Depp allegedly saved her life.

Speaking in defence of Johnny Depp during his 2022 court case with ex-wife Amber Heard, Love remarked, “Johnny gave me CPR in 1995 when I overdosed outside the Viper Room.” Love also said that, whilst she was struggling with addiction, Depp offered support to her daughter Frances Bean Cobain.

Another famous face who attended The Viper Room whilst addled with drugs was John Frusciante, then ex-guitarist of the Red Hot Chili Peppers, and who struggled with addiction for many years. 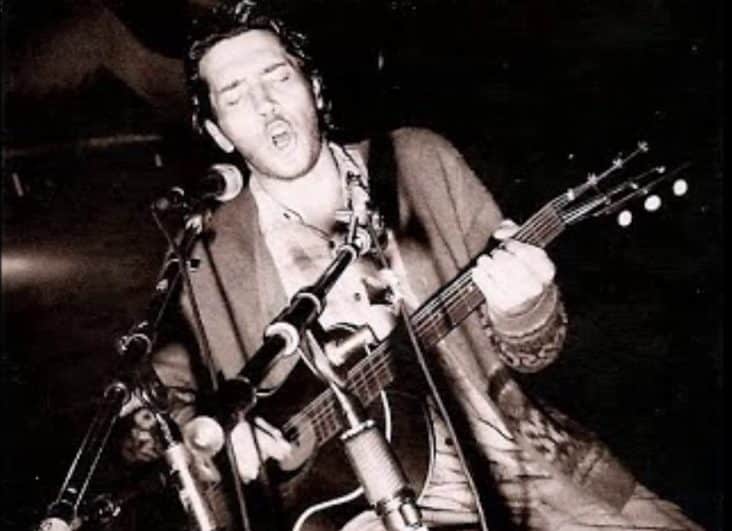 Frusciante’s attempted comeback solo show at the club in 1997 proved disastrous, with the guitarist collapsing and vomiting after one song. Happily, after going through rehab the guitarist was able to get back on track, rejoining the Red Hot Chili Peppers for their hit 1999 album Californication.

While Donovan and Frusciante may have overcome their troubles, not all The Viper Room’s guests were so lucky. The club seemed to remain synonymous with death due to a number of high profile figures who made their last public appearances there.

INXS frontman Michael Hutchence gave what turned out to be his final performance at the Viper Room in November 1997, barely a week before he died by suicide. 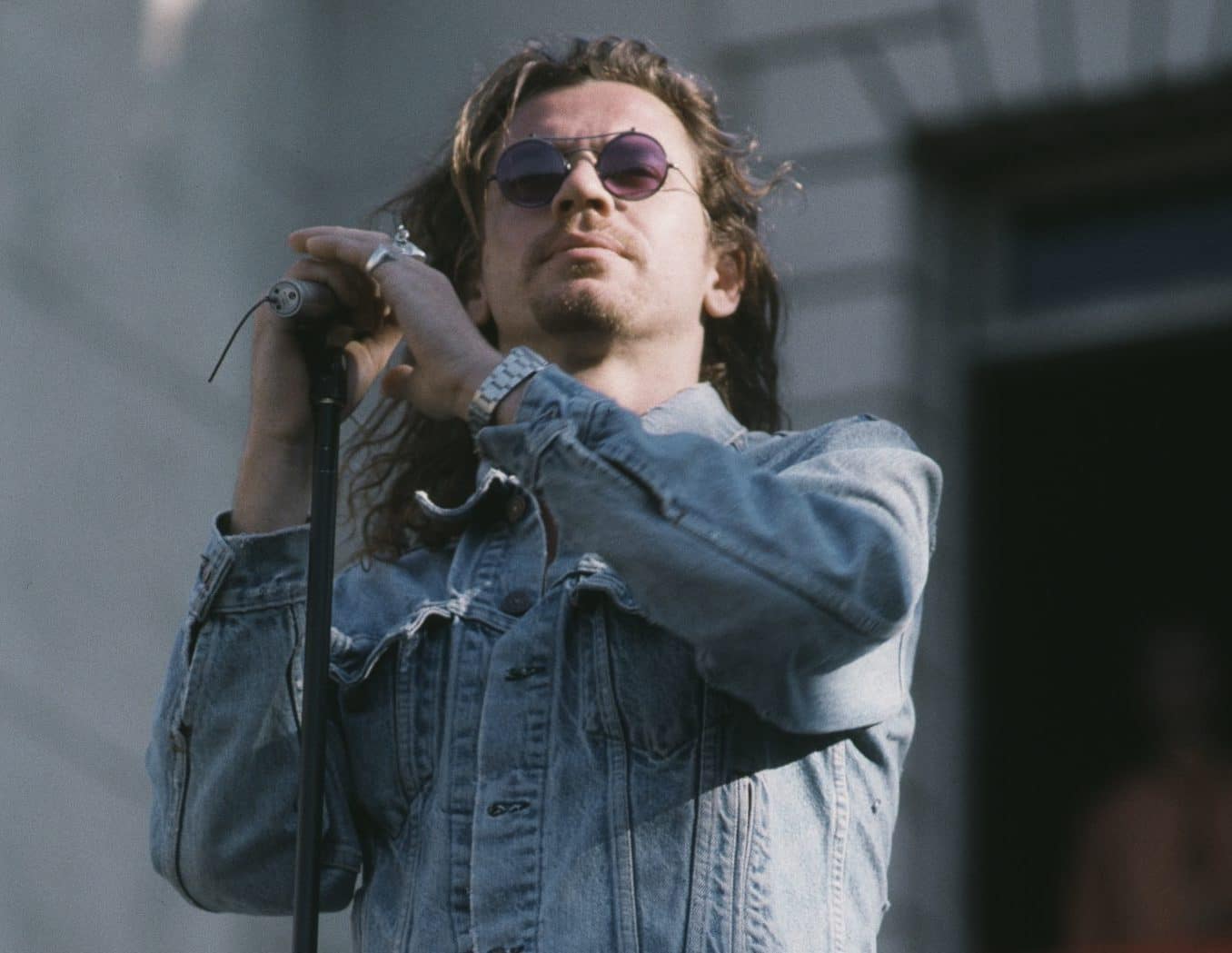 The reverberations of this tragedy were felt for years afterwards: Hutchence’s partner Paula Yates died from an accidental drug overdose in 2000, and Yates’ daughter Peaches Geldof would die the same way in 2014.

Another notable personality who made his last public appearance at the Viper Room was 1960s counterculture icon Timothy Leary, who died soon afterwards from cancer.

On top of all this, there are even stories from guests and employees that the club might literally be haunted, which made it the subject of a 2017 episode of reality TV series Ghost Adventures. 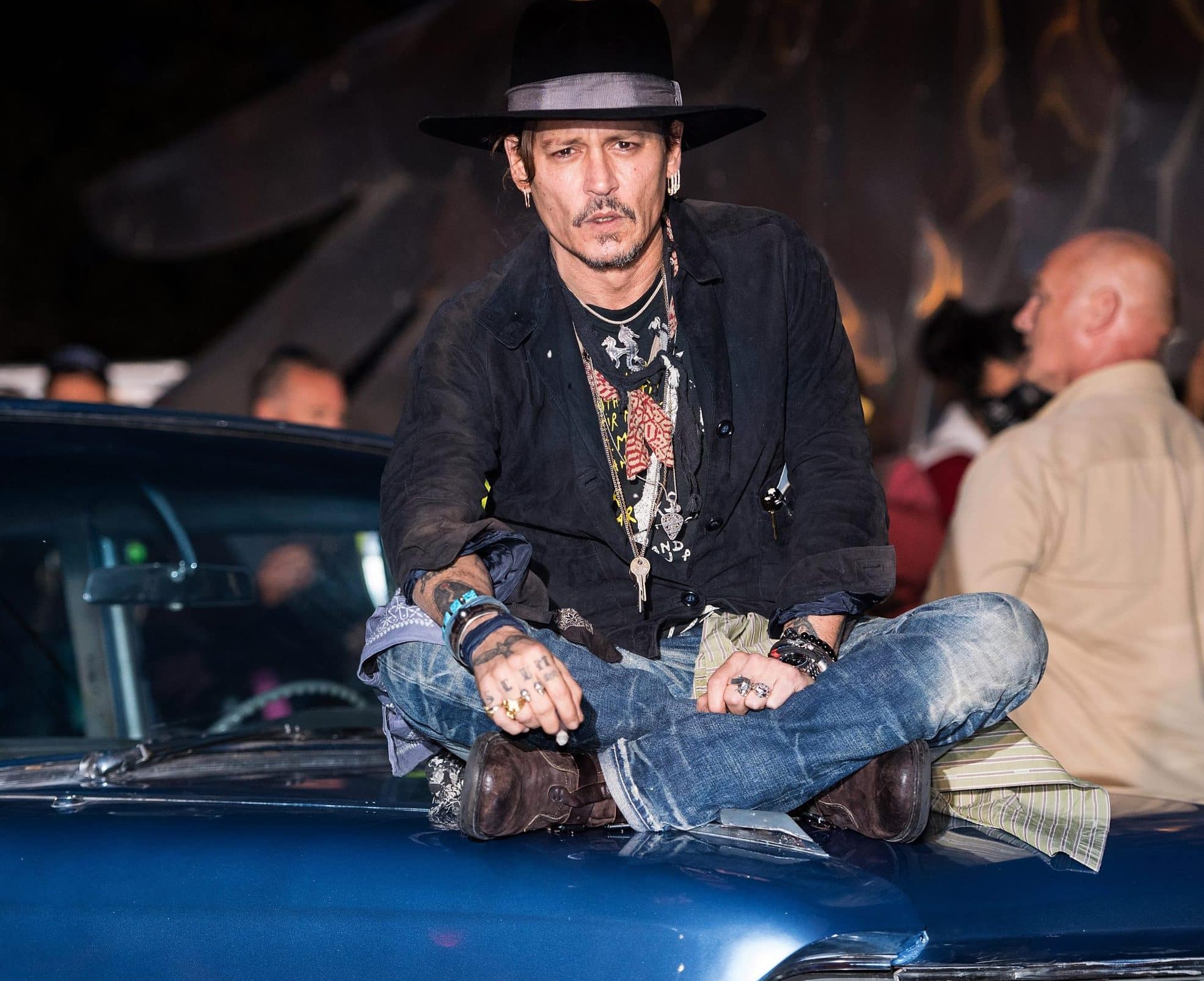 Throughout the 90s Johnny Depp’s involvement helped keep The Viper Room in the popular consciousness, but things eventually turned sour behind the scenes.

Depp’s business partner Anthony Fox wound up taking out a lawsuit against the actor, accusing Depp of fraudulently mishandling the club’s money.

However, before the case made it to court Fox mysteriously disappeared in late 2001. A few weeks later, Fox’s truck was found, but to this day he has never been found.

This led many to suspect Depp of foul play, but recent developments in the ongoing investigation seem to have cleared the actor of any wrongdoing. 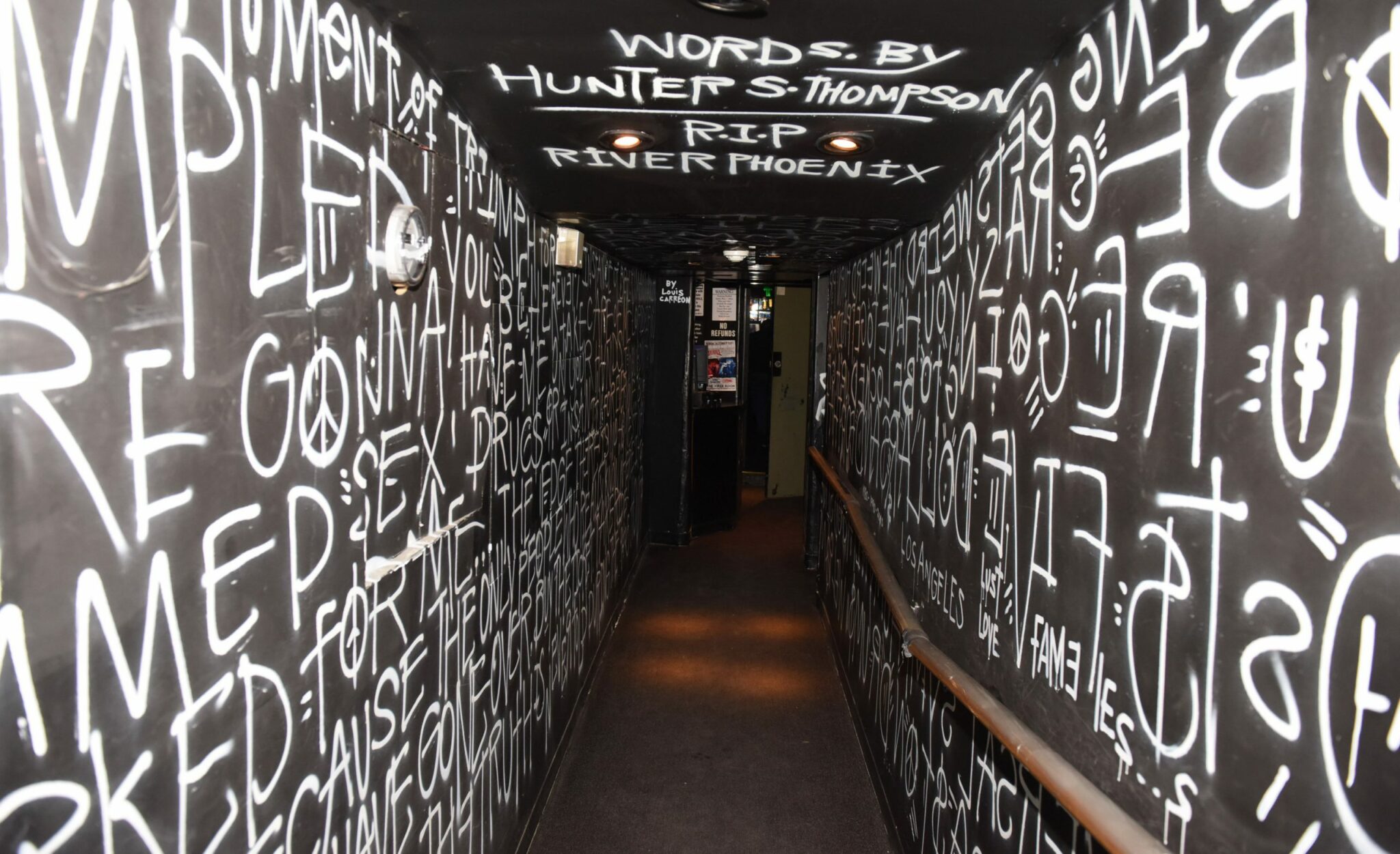 Nonetheless, the scandal surrounding Fox’s disappearance marked the beginning of the end of Depp’s relationship with The Viper Room. In 2004, Depp turned over his share in the club to Fox’s daughter, and he no longer has anything to do with the venue.

Today, The Viper Room remains open under different management and continues to entertain many of Hollywood’s biggest stars. It’s been some time since any scandals of note have emerged from a club that was, in its heyday, a notorious spot for debauchery, death and celebrity conspiracy theories.