Most Valuable Vintage GI Joe Figures And Toys In 2022

The first ever action figure, GI Joe started out as a simple sketch of a military doll in 1963. The inventor Stanley Weston took his plan to the toy company Hasbro, where an executive told him: “You will make a fortune with these.”

Almost 60 years later, GI Joe has become one of the most recognisable toy franchises in the world – and now you, too, could make a small fortune with your vintage models. Here are some of the most valuable older items from the range, from GI Nurses to aircraft carriers. Snake Eyes is the first commander of the GI Joe team, and he specialises in hand-to-hand combat. Highly secretive about his past, he lives in the Sierra Nevada with his pet wolf, Timber. He first appeared in the GI Joe toyline in 1982, and all Joe figures from this year can be distinguished by their straight arms. (Later models have a movable arm and fist to grip accessories.)

One 1982 straight-armed Snake Eyes sold for an incredible $3,050 on eBay in May 2022. It received 41 bids despite having a perished O-Ring, the internal rubber band that holds the toy together. 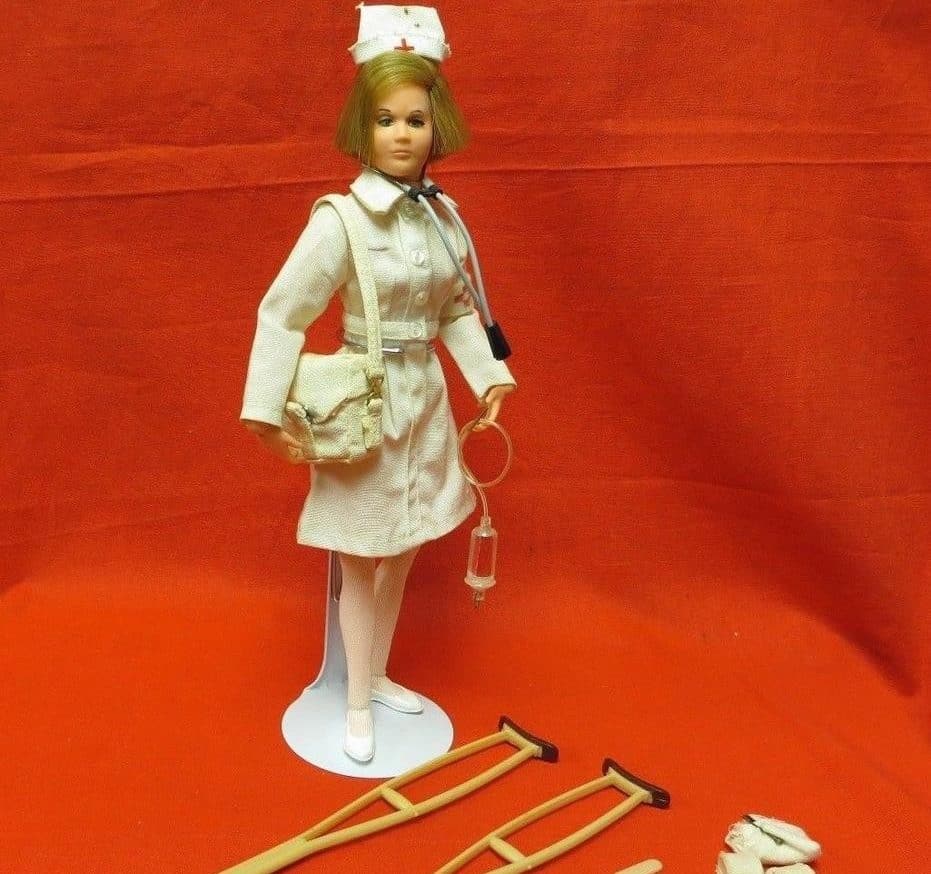 When GI Nurse landed on shelves in 1967, she wasn’t particularly popular. Dubbed ‘America’s Movable Action Girl’, she came with an IV, medic bag, crutches, bandages, a stethoscope and splints. She failed to win the hearts of either boys or girls in the 60s, but collectors love her today.

One seller, based in Fort Worth, Texas, secured $5,945.90 for a vintage GI Nurse in April 2022. Again, the condition of this particular toy didn’t impede its sale. According to the seller, the uniform was ‘soiled’ and the box was ‘very damaged’, though it did come with a complete set of accessories. 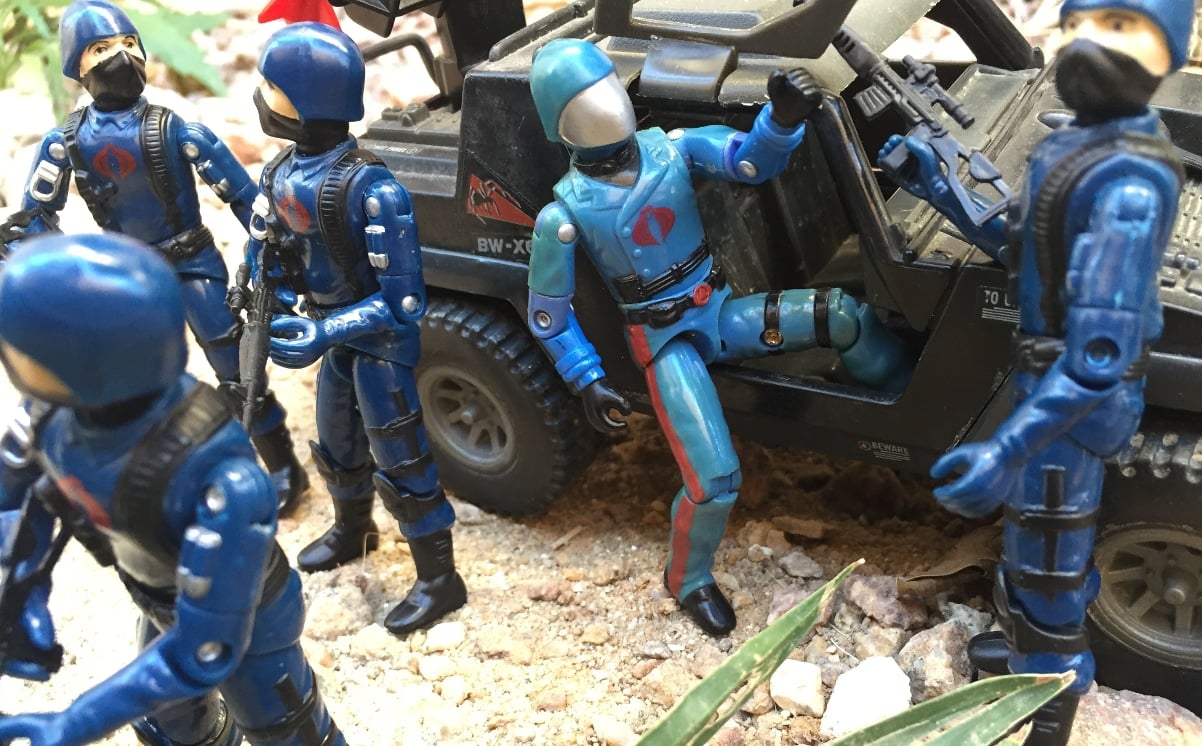 The Cobra Commander is the GI Joe toyline’s main antagonist. In his signature blue armour, he leads a terrorist organisation seeking global domination. One 1983 model of the figure won $4,700 in a May 2022 eBay auction.

“I bought this graded around 2002-2003 and it has sat in a dark cool closet at my office for the last 20 years,” the seller wrote. This particular toy featured an ‘unpunched’ tag, meaning it had never been pushed onto a store peg, so its card packaging was intact. Some collectors favour unpunched models as they tend to be in better condition. 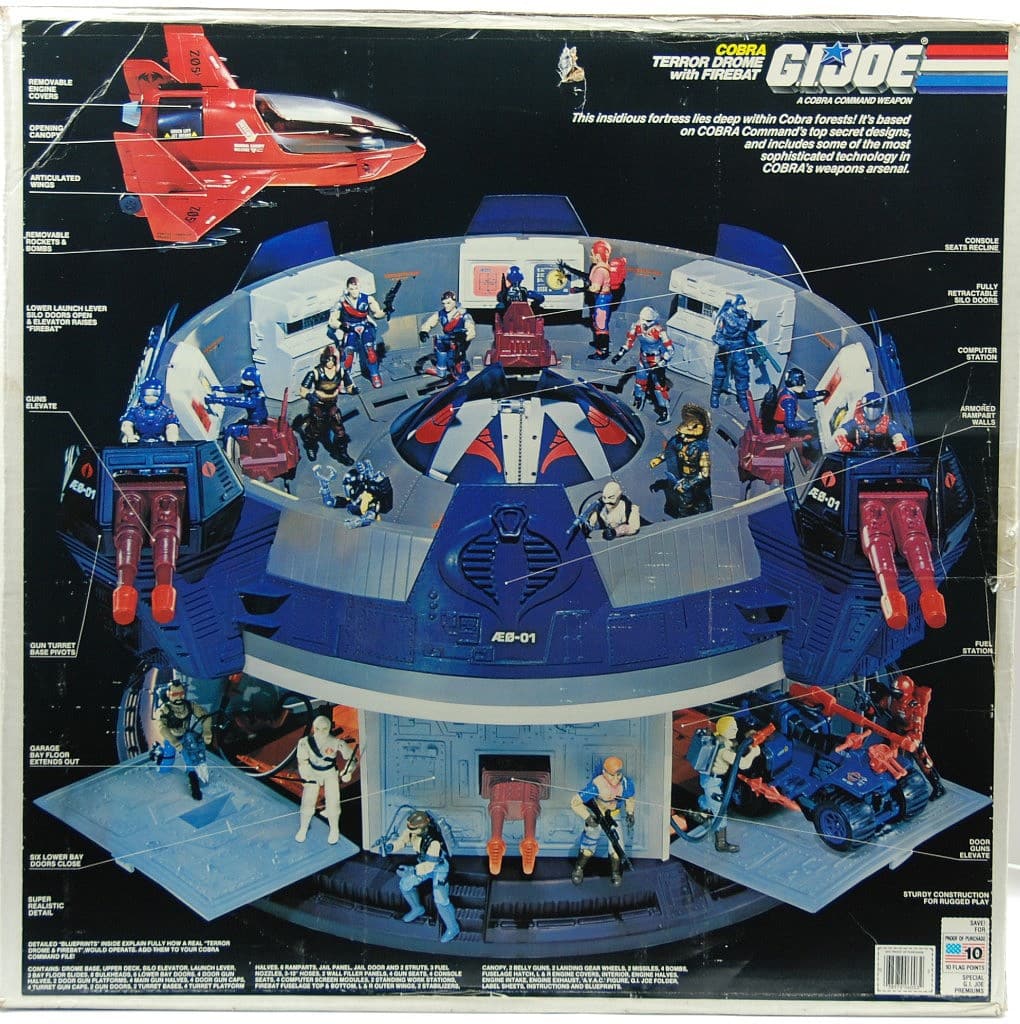 The Terror Drome is the fortress and headquarters of Cobra. The toy would take around a week to assemble, and was the pride and joy of many a GI Joe enthusiast in the 80s.

In April 2022, one Cobra Terror Drome from New York City reached a best offer of $3,986. “This is very hard to find in this condition,” the seller noted. “They are almost always put together and rarely have a box and never have the shipper sleeve.” 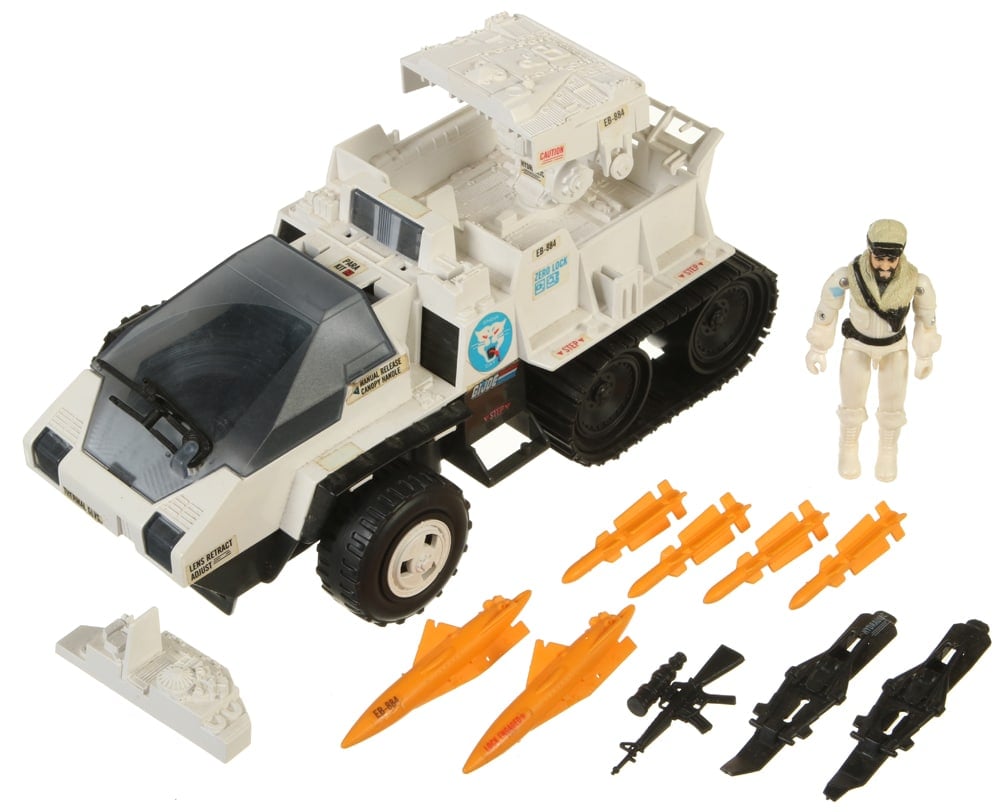 The Snow Cat Vehicle first featured in the 1985 toy line A Real American Hero. It was accompanied by Frostbite, a GI Joe soldier in a fur hat and snow goggles.

A sealed, pristine model of the Snow Cat fetched $4,186 on eBay in June 2022. The seller was located in Nolensville, Tennessee and the toy was listed simply as ‘vintage’, with no specific date of manufacture. The toy was re-released in the 1988 line Tiger Force, repainted in yellow and green stripes, and the 2003 line Spy Troops. The GI Joe naval fighters rely heavily on the USS Flagg, a US Navy aircraft carrier. It got its name from the fallen officer General Flagg, who in GI Joe mythology was killed while fighting Cobra.

A 1985 version of the toy sold on eBay for $2,988.56 in March 2022. This incomplete set was put back into its original packaging and was in “excellent condition”, according to the seller. 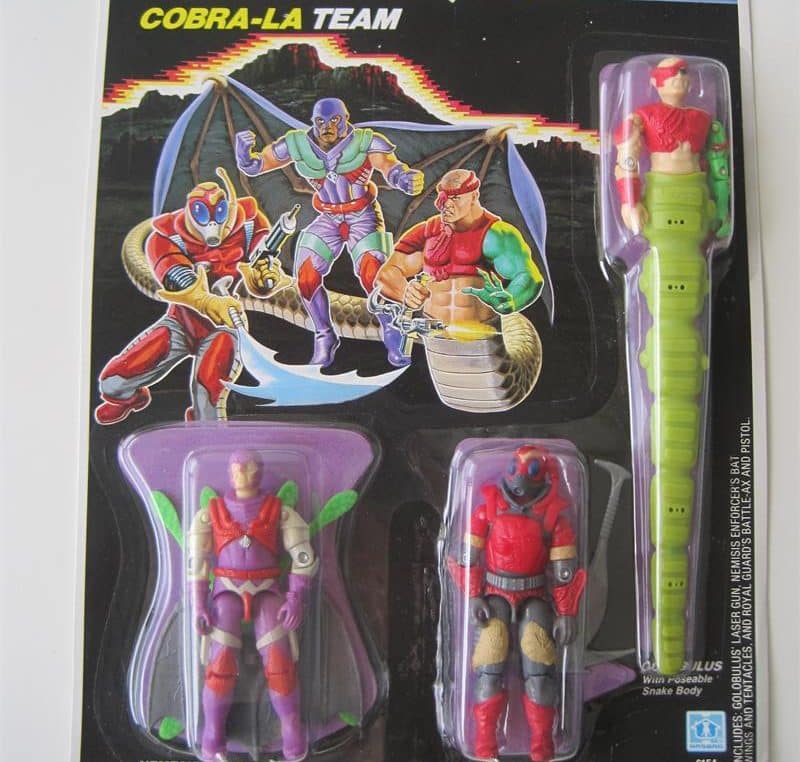 Featuring a trio of superhuman characters, the Cobra-La Team represent an ancient civilisation that used to rule Earth. Fans were thrilled when a special pack containing Golobulus, Nemesis Enforcer and a Royal Guard came out in 1987.

The vintage toy still lived up to the hype in April 2022, when it sold on eBay for $2,500. Like many sellers on this list, the lucky owner of this toy was based in the USA. “There is some slight scuffing on the bubble above the Royal Guards head,” they described. “No cracks, creases, veins and no lifting. Fantastic example.” 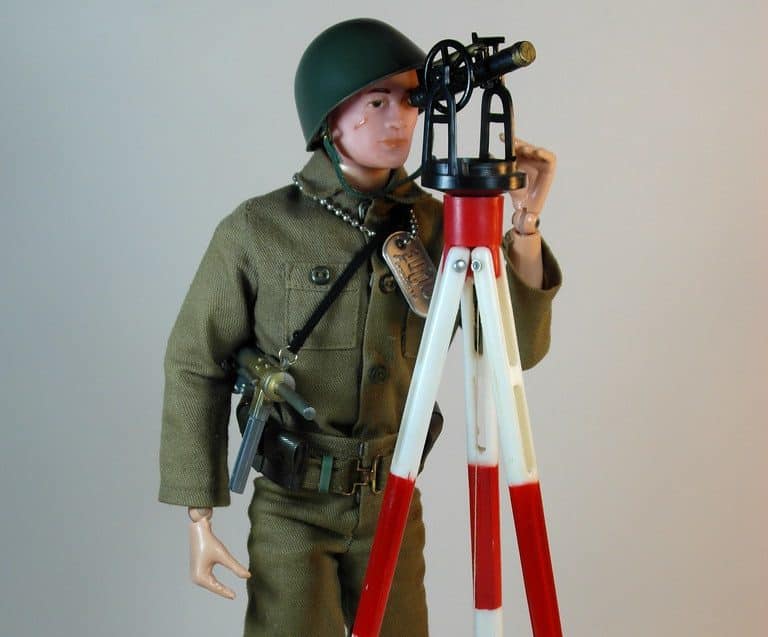 Among the more unassuming items on this list is a simple accessory: a combat engineer tripod that came without an action figure. Released on seven occasions between 1964 and 1975, this toy included a helmet, golden gun and tripod.

One such example, in a used condition, sold for $2,491 in June 2022. The seller described their excitement at discovering the tripod: “If the winner of this piece wants it, I can send them the video of this actual piece, among others, being found in a time capsule state, buried in an attic up in Canada.” 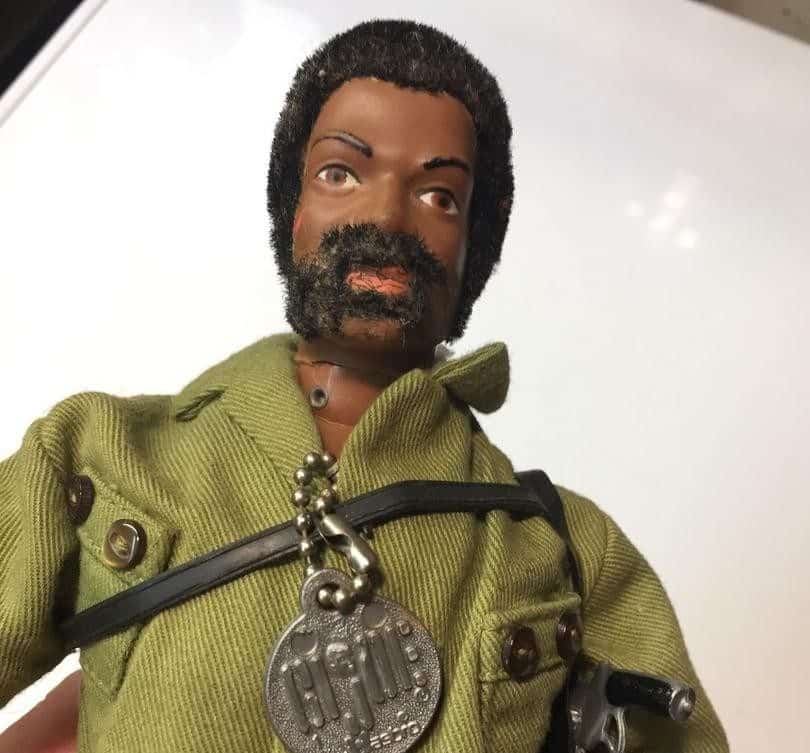 In 1964, Hasbro released an African American Adventure Team Commander. Talking variants of this toy emerged in 1967. It belonged to the range named G.I. Joe: America’s Movable Fighting Man, which also depicted ‘Action Soldiers of the World’.

A seller in Granite Falls, North Carolina scored $2,302 for this toy in May 2022. “[It] talks loudly and [you] can understand the command very well,” they noted. 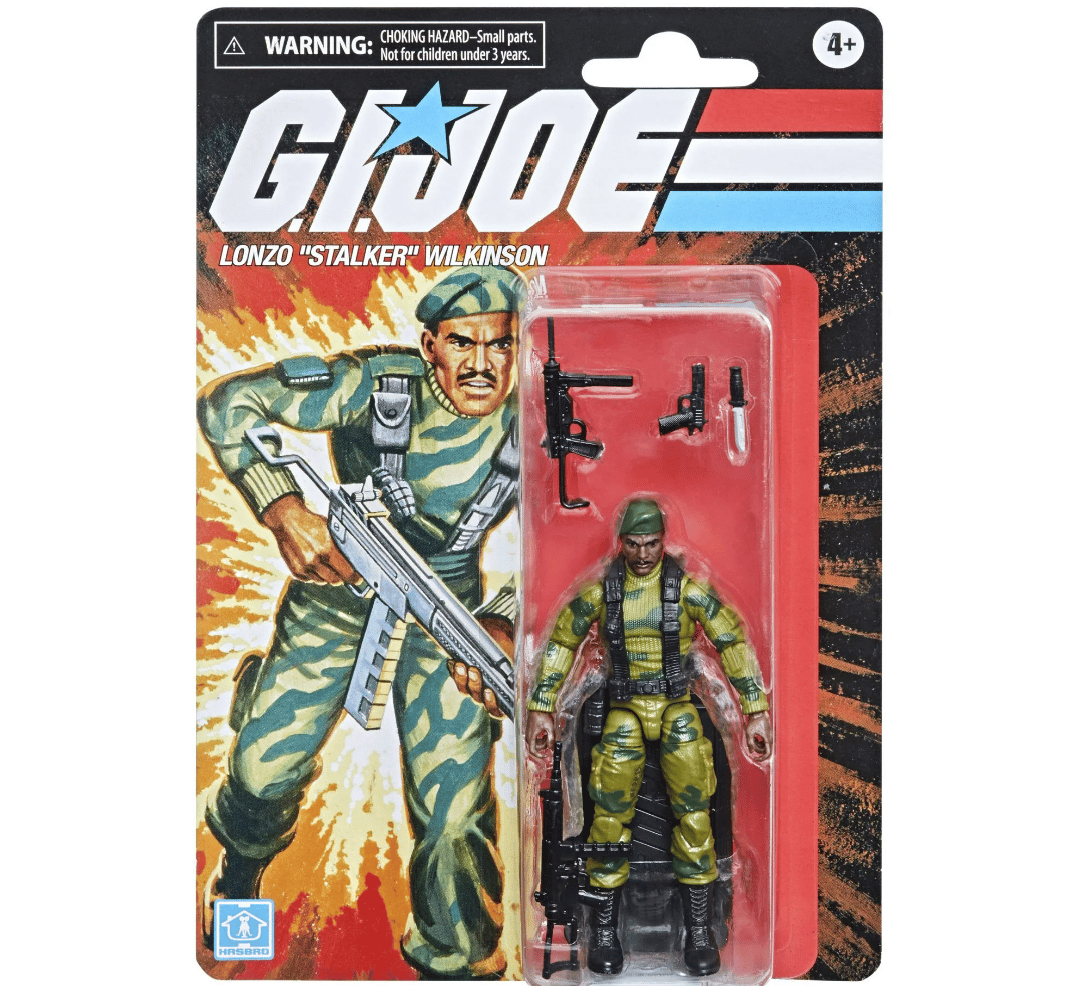 Another figure from the Real American Hero line in 1982, Stalker was the first African American character among GI Joe toys. He is a small-arms expert who speaks five languages fluently, and is the GI Joe Team’s original ranger. One such toy fetched $2,225 on eBay in May 2022.

The seller from Florida claimed this item is “very, very rare” due to its unusual packaging: “[At] the beginning, the first figures did not have the “Snap On” written on the top of card, this is one of them, extremely rare! There are a handful of those figures left sealed in beautiful condition like this one! The “O” ring is tight, the blister is crystal clear and the card has vibrant colors.”