He-Man, ‘the most powerful man in the universe’, came to life only after a far more famous action figure line was rejected by Mattel. In 1976, Mattel CEO Ray Wagner turned down a Star Wars offer after seeing the $750,000 license fee.

Instead, Mattel created a rival for children’s hearts and pocket money: He-Man. Sure enough, He-Man would be a huge success, spawning comics, TV shows, films and even literary analysis. Here are some of the most valuable vintage toys from the He-Man line. 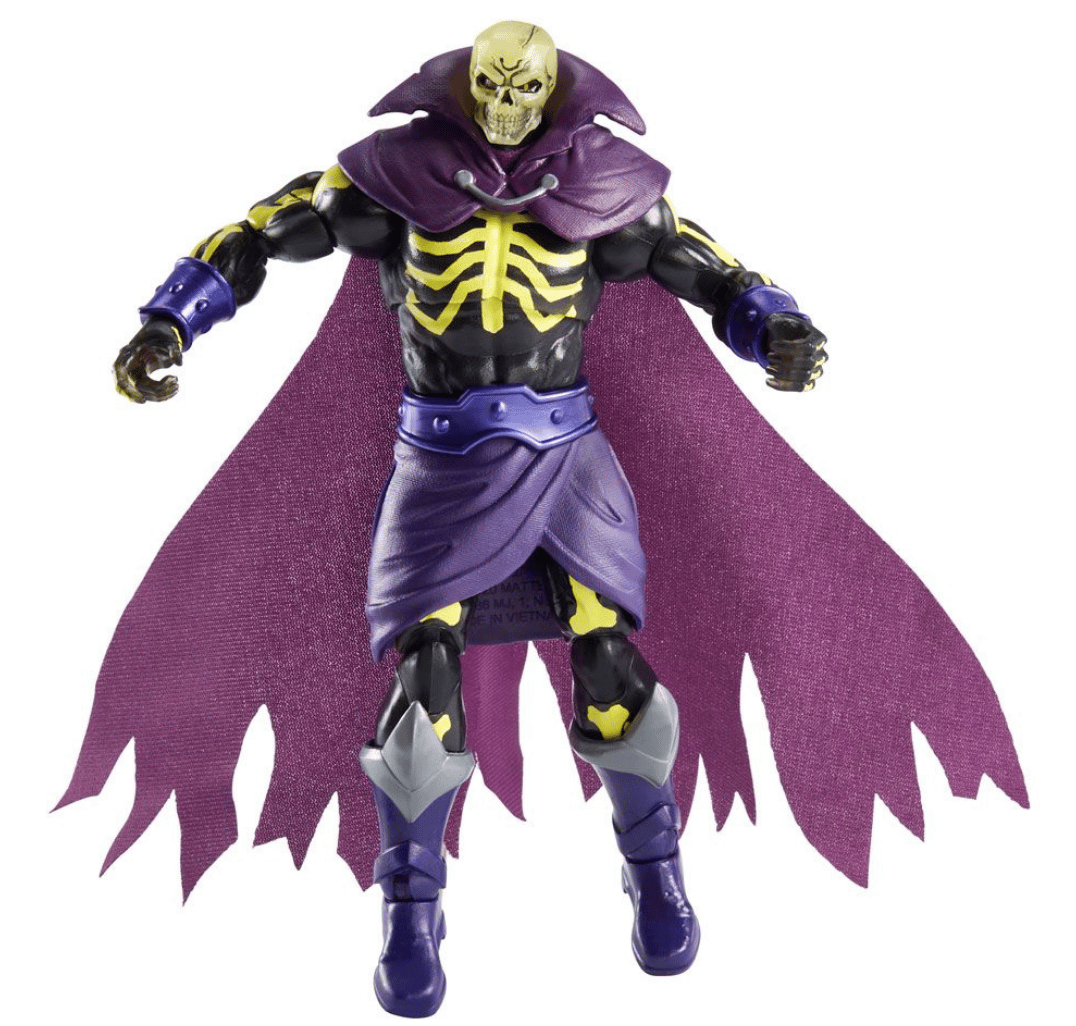 In April 2022, one avid fan bought a 1986 Scare Glow toy for $2,200. In the comics, this character arrives from a different dimension to do the evil bidding of He-Man’s nemesis, Skeletor.

The preservation of each toy can heavily impact its worth on eBay. The seller added a few pointers about the features that could decrease or increase the value of vintage He-Man toys. “Card has moderate creasing and veining as shown,” they wrote. “Edge and corners are also worn as pictured. Bubble is solid and sealed – nearly crystal clear – no yellowing at all – very minor clouding if any.” 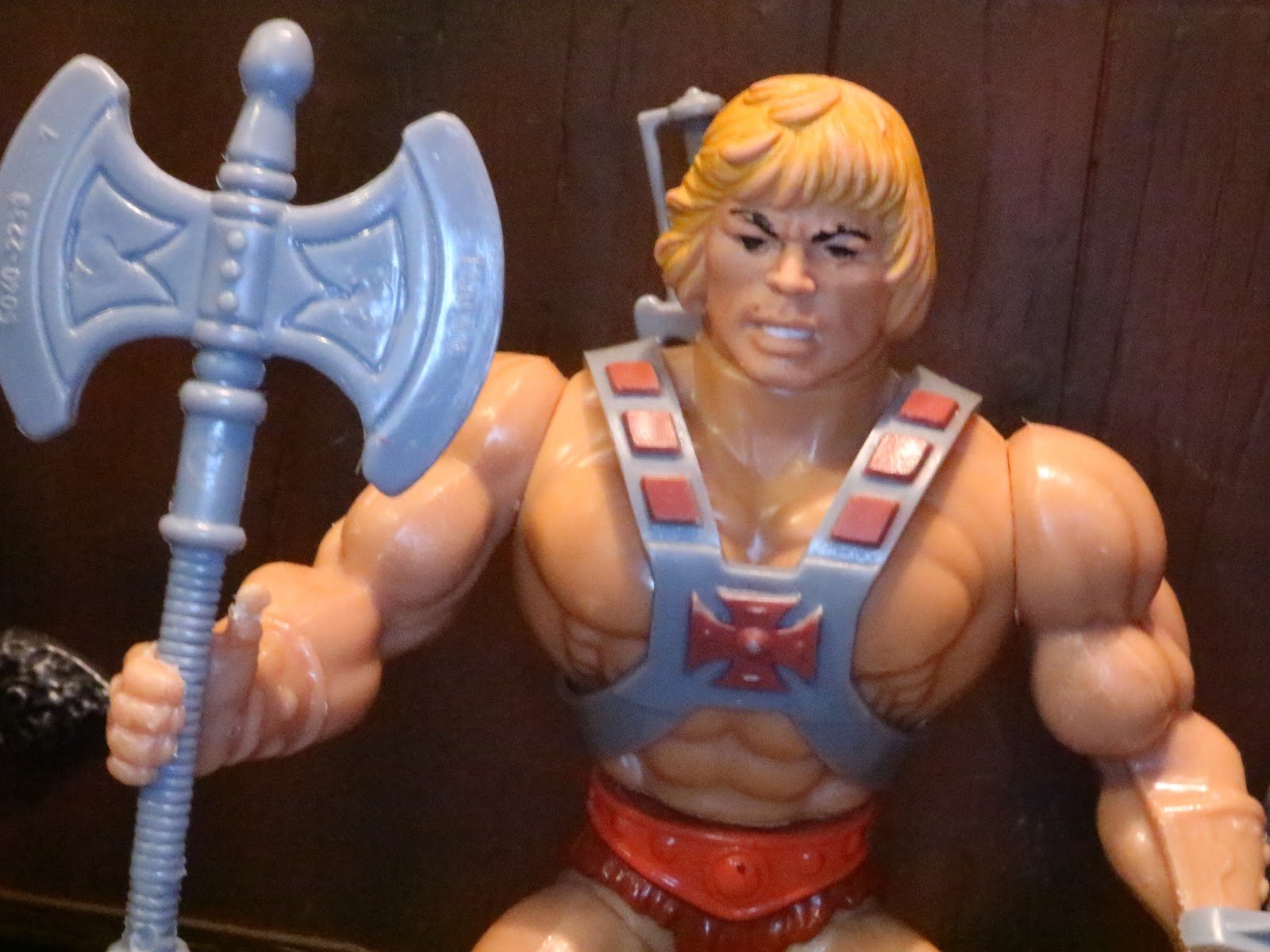 One collector bought a rare late-80s He-Man for $3,500 in May 2022. With a seller based in Buenos Aires, this toy stood apart from other vintage models because it was made far from the brand’s American home, being instead manufactured by the company Top Toys in Argentina.

Marketed and sold worldwide, most He-Man and Masters of the Universe toys were manufactured in Mattel factories in Malaysia and Taiwan. But Mattel also worked with companies in India, Brazil and Japan to make this famous face. 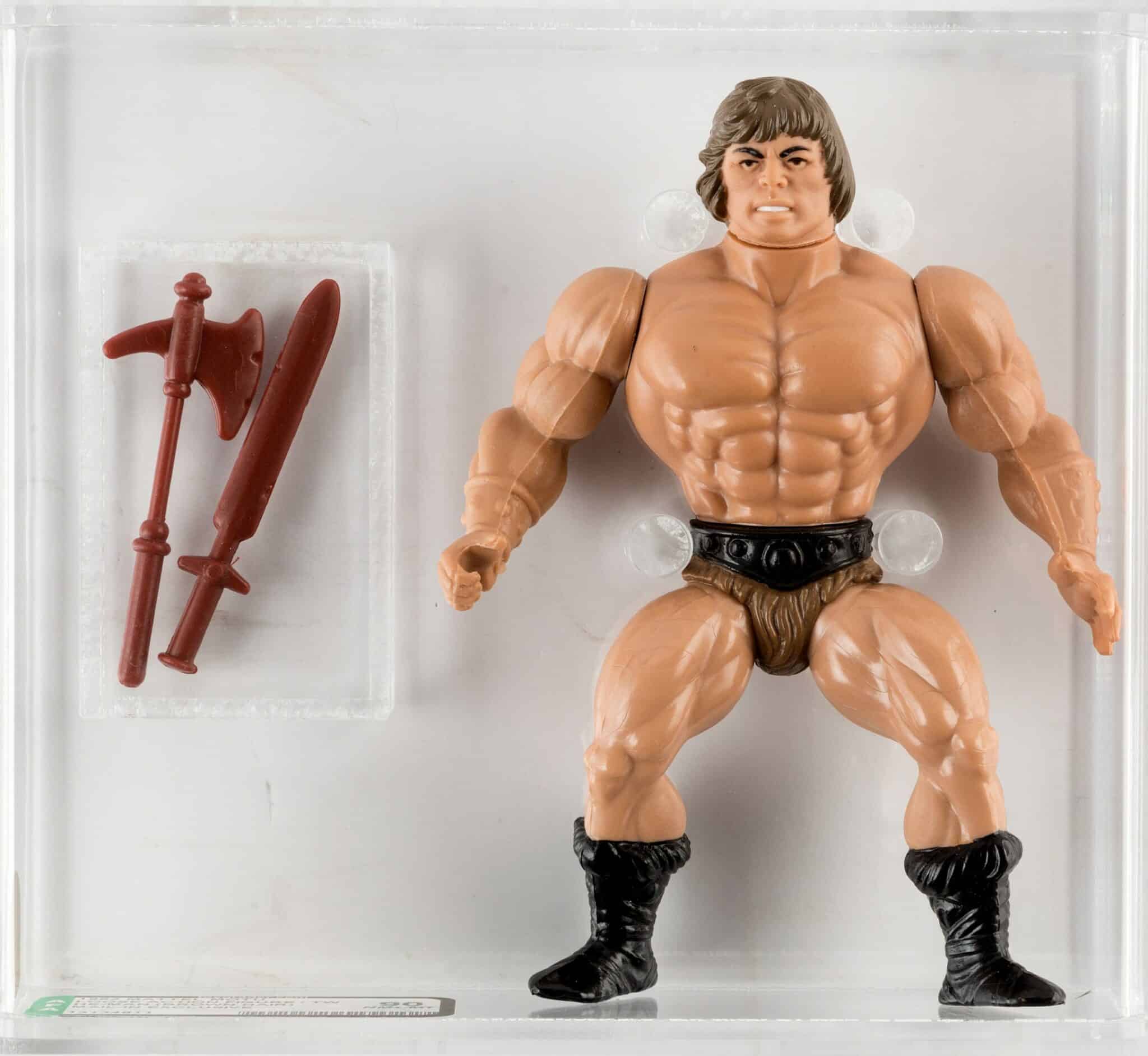 The Wonder Bread He-Man is a misnomer. Wonder Bread and He-Man ran a short-lived promotion in 1986, in which fans could win trading cards – but no action figures. However, in 1983, Mattel offered an unrelated buy 3, get 1 free deal, where fans were mailed a strangely misshapen He-Man toy with a couple of random accessories. Due to recent confusion between the two deals, this toy is now widely known as the Wonder Bread He-Man.

One such toy drew 55 bids on eBay.com back in May 2022, with the winner offering $2,650 for the prized item. In fact, despite this hefty price, the seller advertised it as “a chance to get this way cheaper than the other 80+ graded [He-Man figures] listed!” 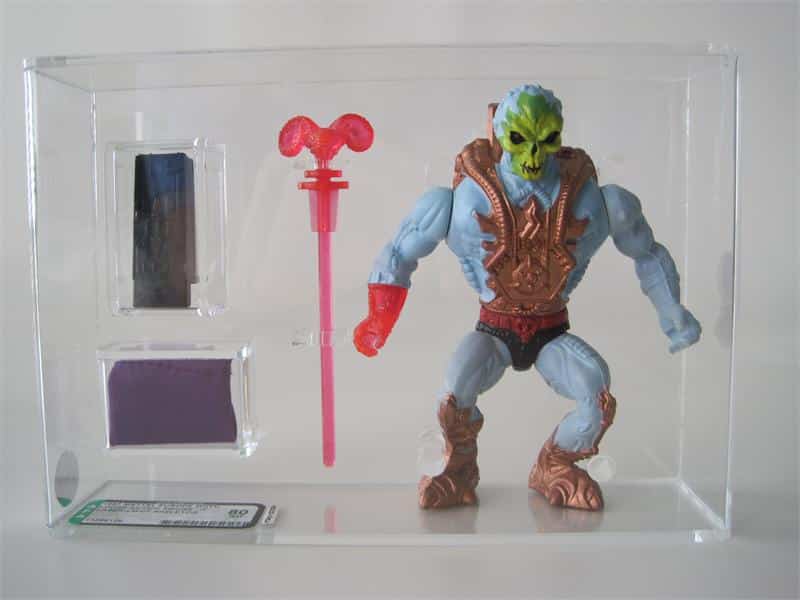 One of the most valuable Masters of the Universe action figures, the Laser Light Skeletor was only released in Italy, Switzerland and Spain in the 80s. He has LEDs in his eyes and right hand, which are triggered when his arm is raised.

A 1988 model of this precious toy sold for $2,467.15 in Australia in June 2022. Spanish versions of this toy came with a miniature catalogue of the Masters of the Universe range. 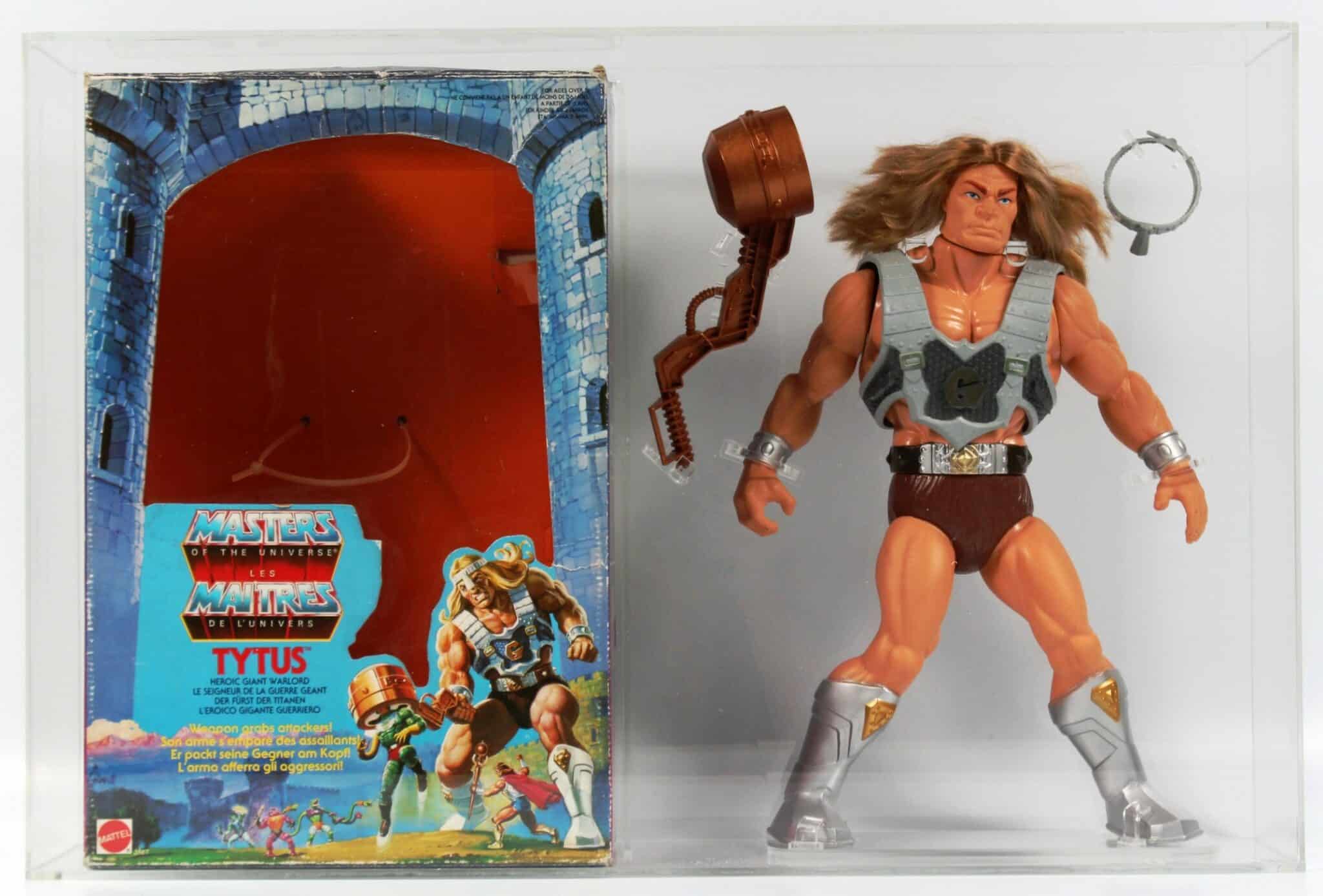 Tytus the Giant fights the ancient Snake Men and belongs to the Powers of Grayskull toy line. Tytus never featured in the cartoon series, and he has golden fibrous locks, setting him apart from the plastic hair atop most Masters of the Universe figures.

Released only in Europe, Tytus figures can be particularly valuable on eBay. A 1987 model sold for $2,114.70 in June 2022, despite its used condition. 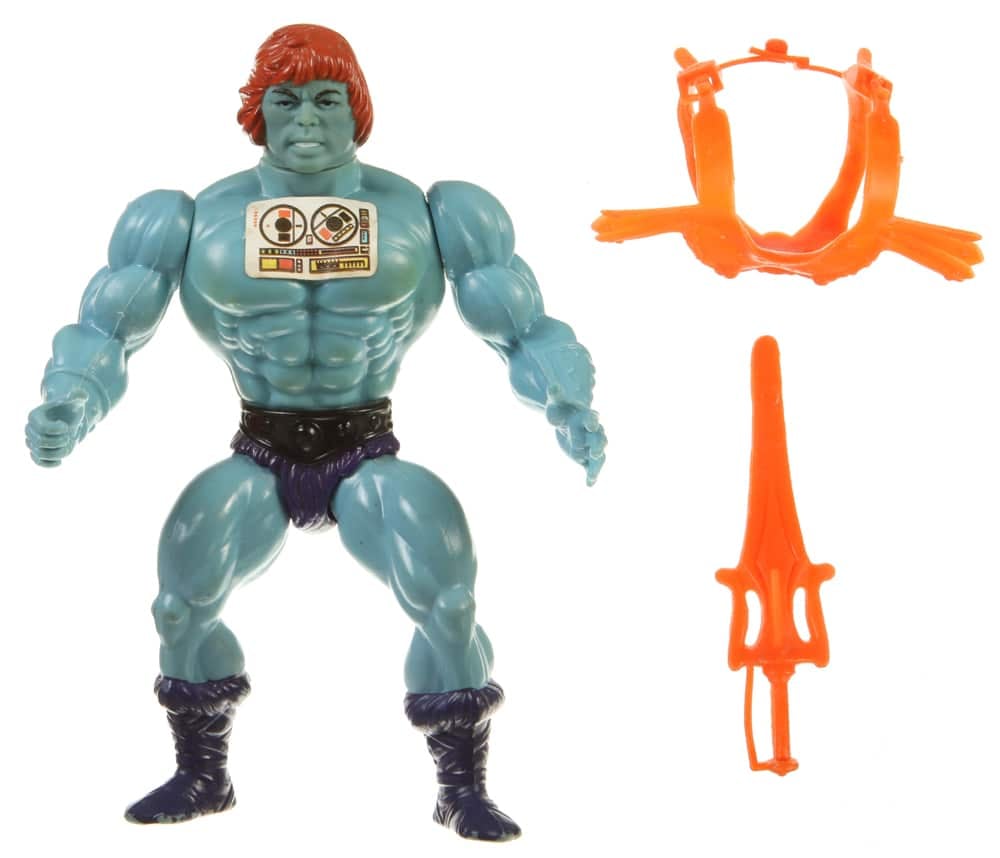 Perhaps the most vivid Masters of the Universe character, Faker is a turquoise superhuman with bright orange accessories. He is He-Man’s evil double, created to serve the wicked Skeletor. Confusingly, in the TV cartoon series, Faker looks identical to He-Man except for his glowing eyes and different voice.

Faker was one of the earliest toys in this range, released in 1982 with the same armour as Skeletor. A later version of Faker, released in 1987, is particularly popular among collectors. One unopened Faker from the 80s sold for $1,795 in April 2022. No action figure collection is complete without a lair – and the massive 1986 Eternia Castle set provided just that. In a particularly entertaining feature, the Eternia Castle set included a shuttle that raced along a single track around the buildings. It required assembly and came with countless accessories, so it is particularly difficult to find a complete set today.

Nevertheless, in May 2022, a seller in Jacksonville, Illinois managed to make $1,325 from his incomplete set, even without the original packaging. Ram Man is a Heroic Warrior figure with the ability to crush obstacles with his head. Described as ‘The Human Battering Ram’ by Mattel, he starts out as a loner living in the wilderness who is lured into Skeletor’s service. He eventually swaps sides and becomes a loyal He-Man supporter. He appears in the 1980s cartoon and the 2002 revival show.

In the 2021 Netflix series, Ram Man is reimagined as a female character named Krass. But the original figure remains popular: in March 2022, a Ram Man figure sold for $1,150. It came in pristine condition and unopened packaging. 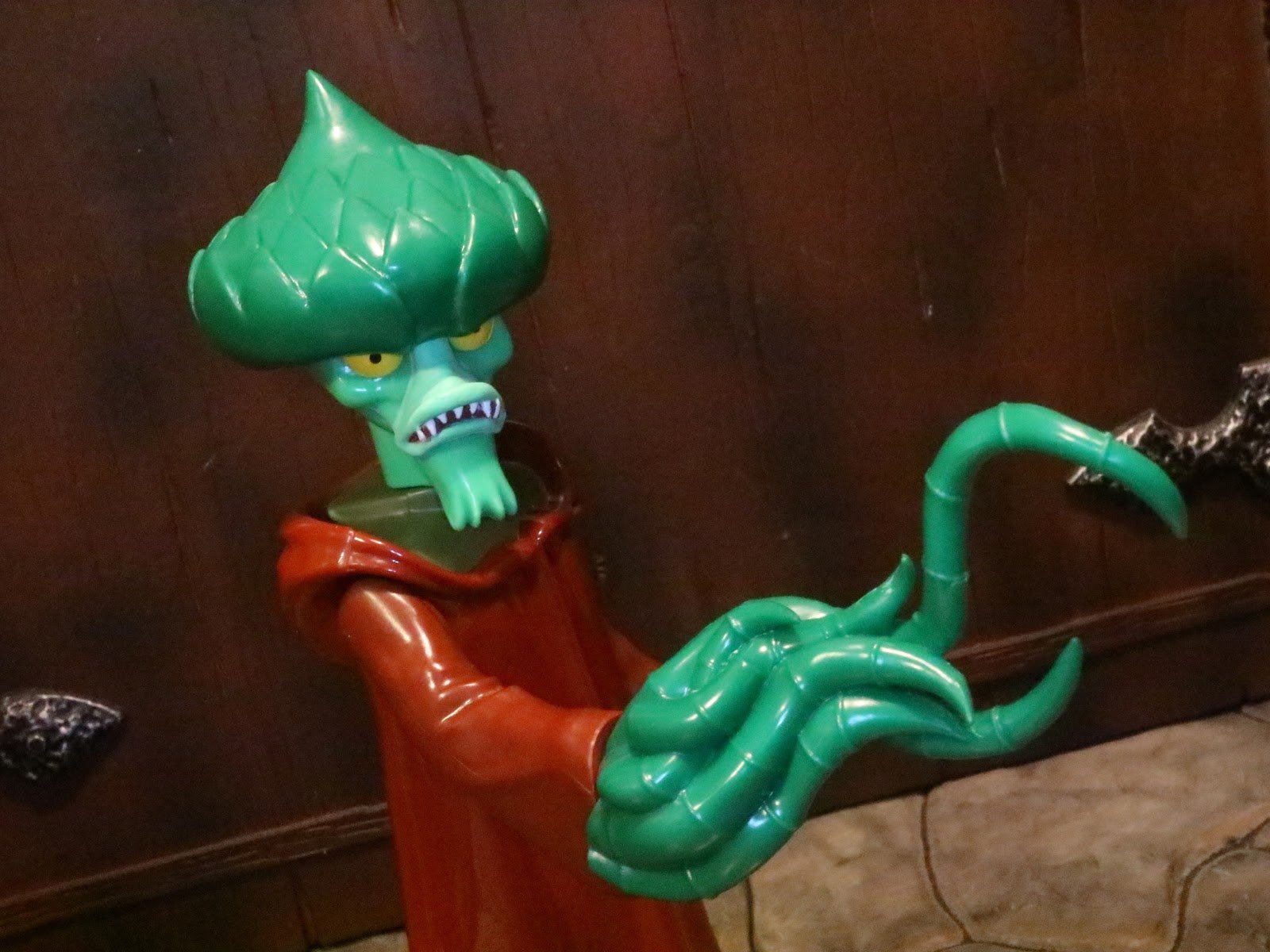 Vintage toy sellers will often group together their wares, even selling entire collections for thousands of dollars. One seller hit the jackpot in April 2022, when they paired figures of Fisto and Evil Seed for a single sale. This pair earned $990 on eBay.

Fisto is a hardy warrior with an oversized metal fist, representing a cybernetic power (in contrast to He-Man’s supernatural talents). Evil Seed, in contrast, is a bright green villain – and enemies He Man and Skeletor team up to ensure his defeat. 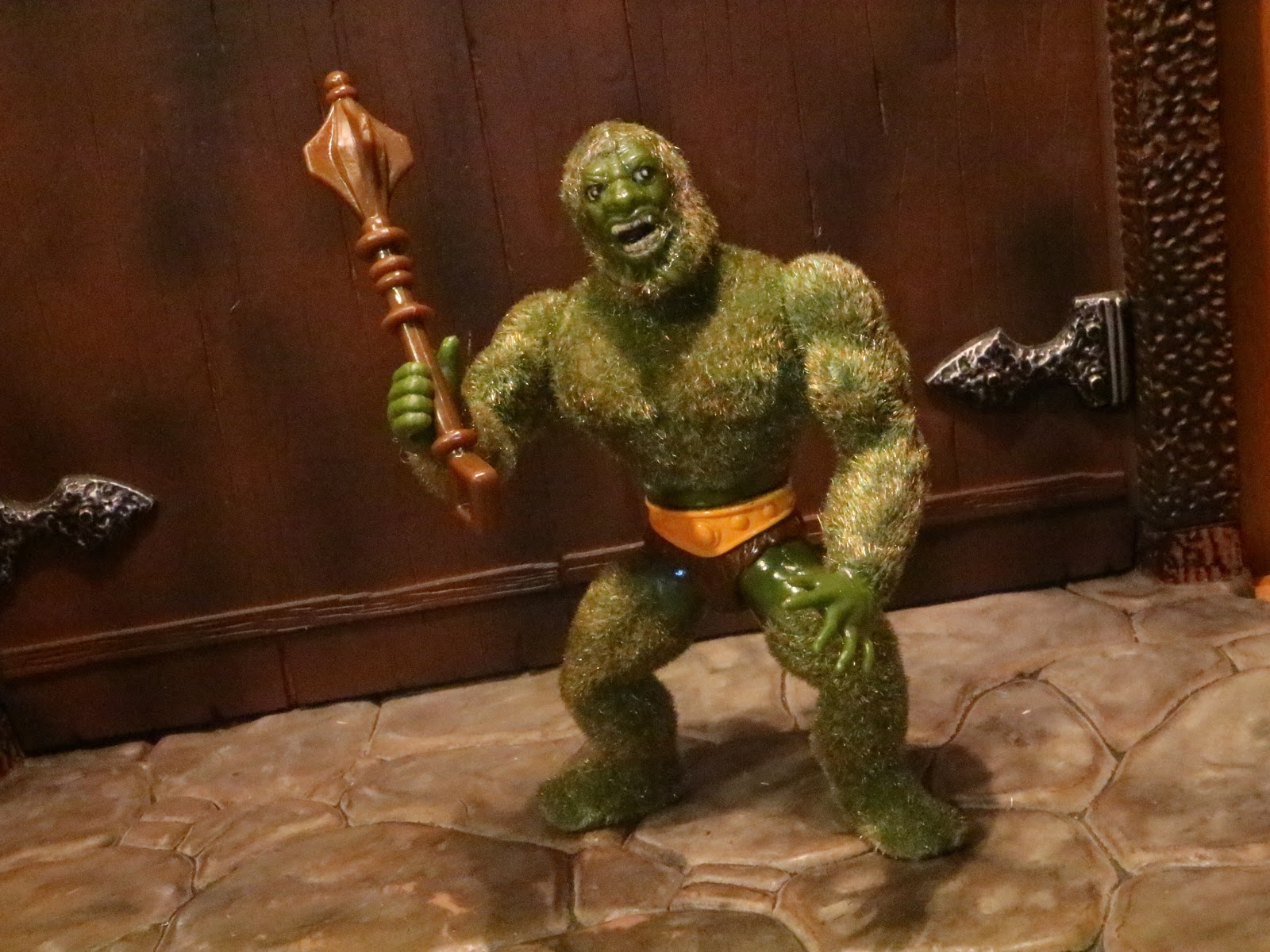 One of the strangest figures in the Masters of the Universe collection, Moss Man is covered head-to-toe in green fuzz. He enjoys the superpower of camouflage, and he can cause plants to grow.

According to the text accompanying this action figure, his real man is Keann’ot N’Horosh and he ‘often joined forces with the Masters of the Universe, helping to protect freedom for all forms of life.’ One vintage Moss Man toy sold for an impressive $990 in May 2022. 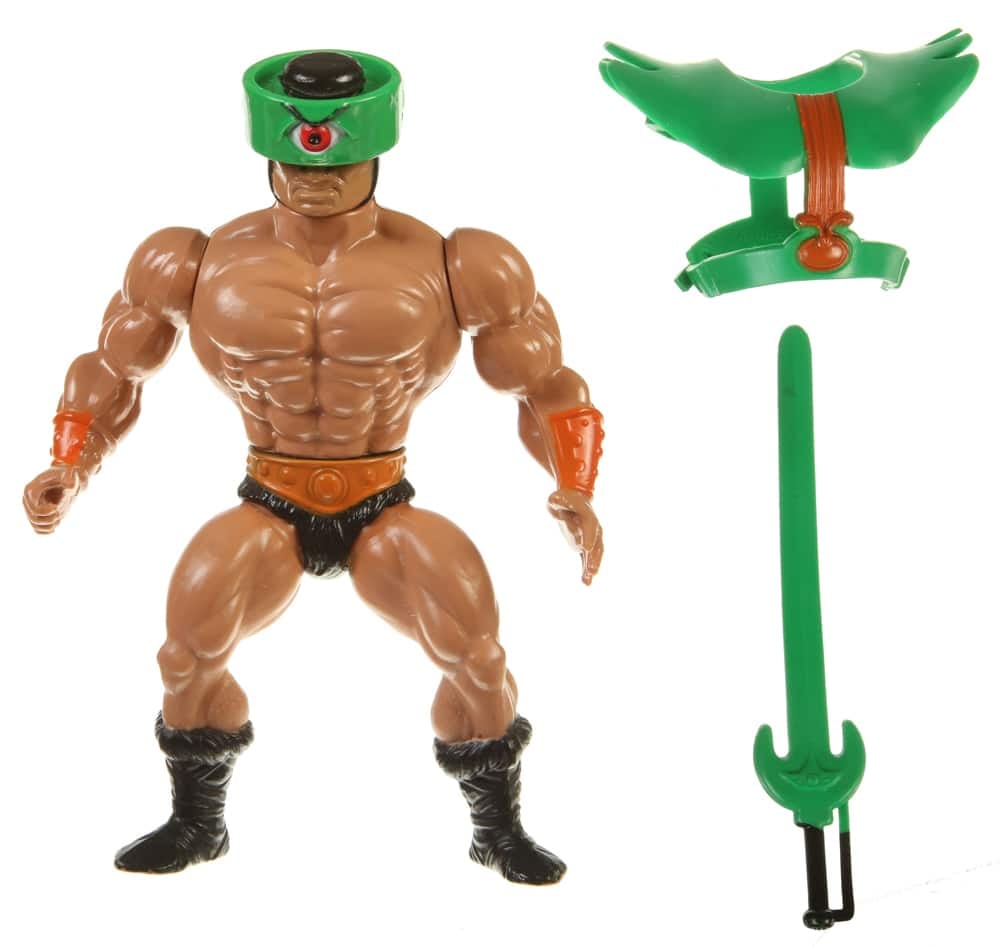 Tri-Klops is Skeletor’s loyal minion, using his triple-eyed rotating visor to blast enemies and see through objects. He was one of the earliest characters designed by He-Man creator Roger Sweet. Originally, Tri-Klops was designed to be a Heroic Warrior – but it was soon decided that he would make a menacing villain.

A Tri-Klops figure earned 32 bids in an April 2022 eBay sale. This 1983 model ultimately sold for $1,127, and the seller described it as a “recent estate find, all original, stored since the early 1980s. Has a bit of a warp to card, some edge wear, slight tear on right edge card top of blister area as well as lower right corner.” 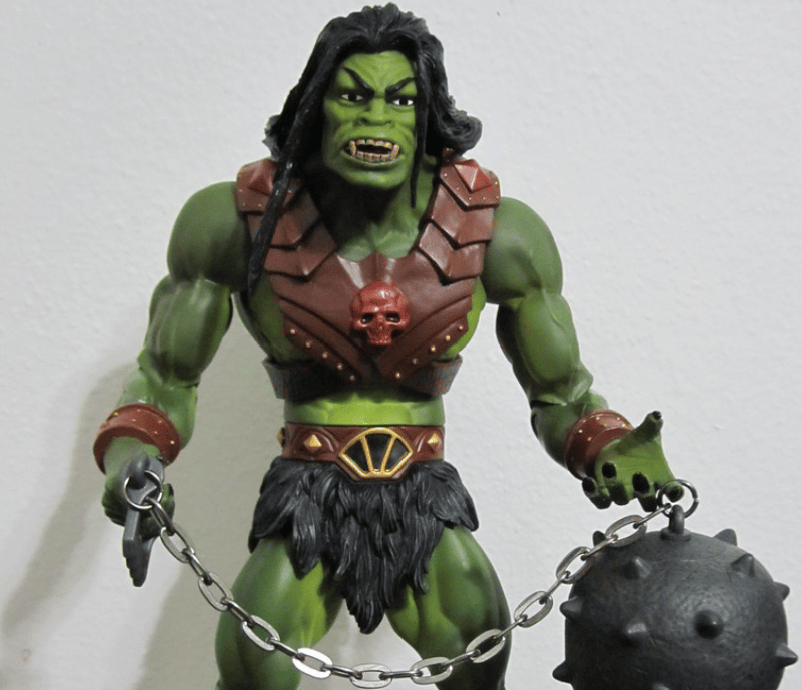 Megator is a green giant – but unlike Tytus, he is an enemy to He-Man and his allies. He wages war against Eternia in the era of He-Ro. This toy was released only in Europe in the late 80s.

Despite being a lesser-known figure in the toy range, Megator can fetch considerable sums on eBay. Dubbed the ‘Evil Giant Destroyer’, this figure sold for an astonishing $7,400 in April 2022. 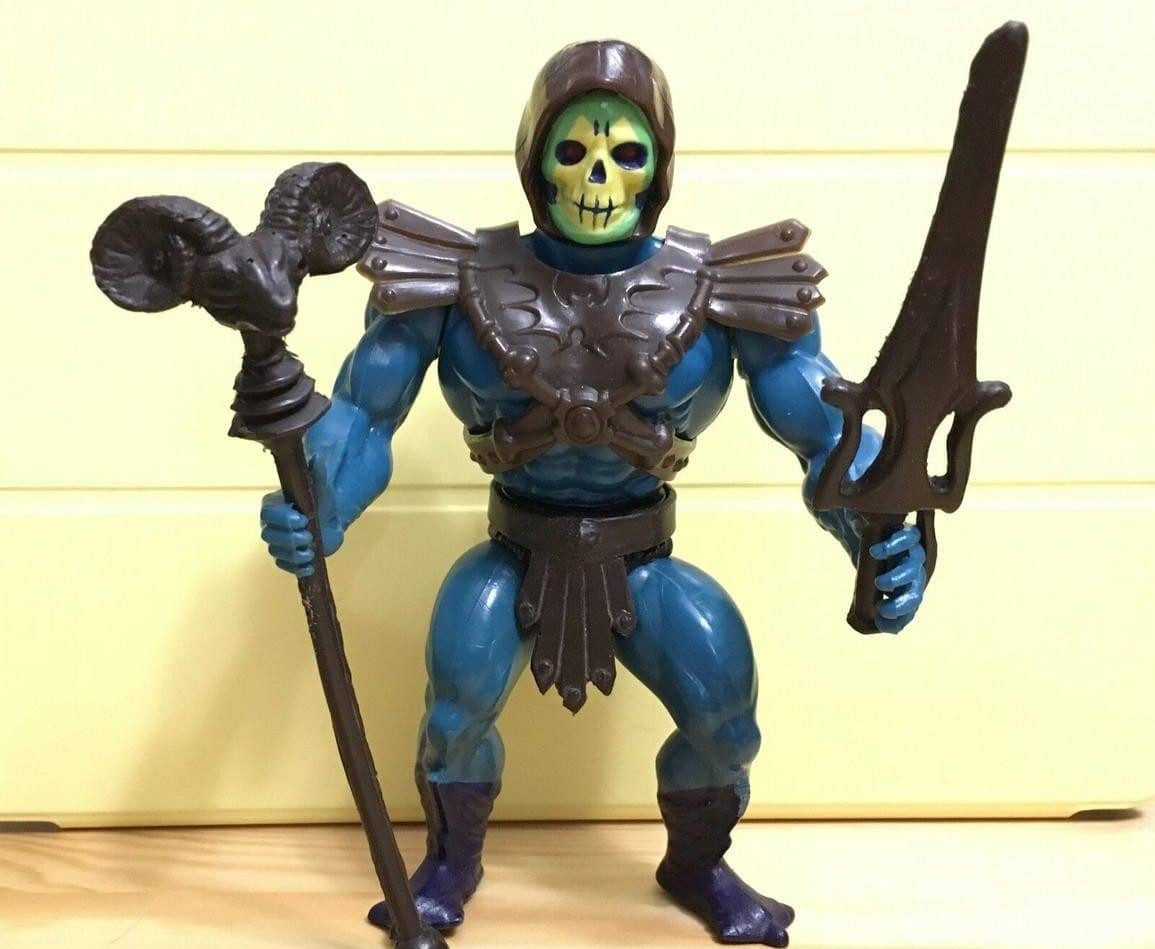 Much like the He-Man from Argentina, Master of the Universe toys of foreign origin tend to receive particular attention from collectors. A very rare dark blue version of Skeletor – manufactured in India – sold for $2,200 on eBay in April 2022.

This particular toy was not in the best condition, with a chipped neck and replacement packaging. But it was authenticated by APG, a service that specialises in grading vintage collectables. 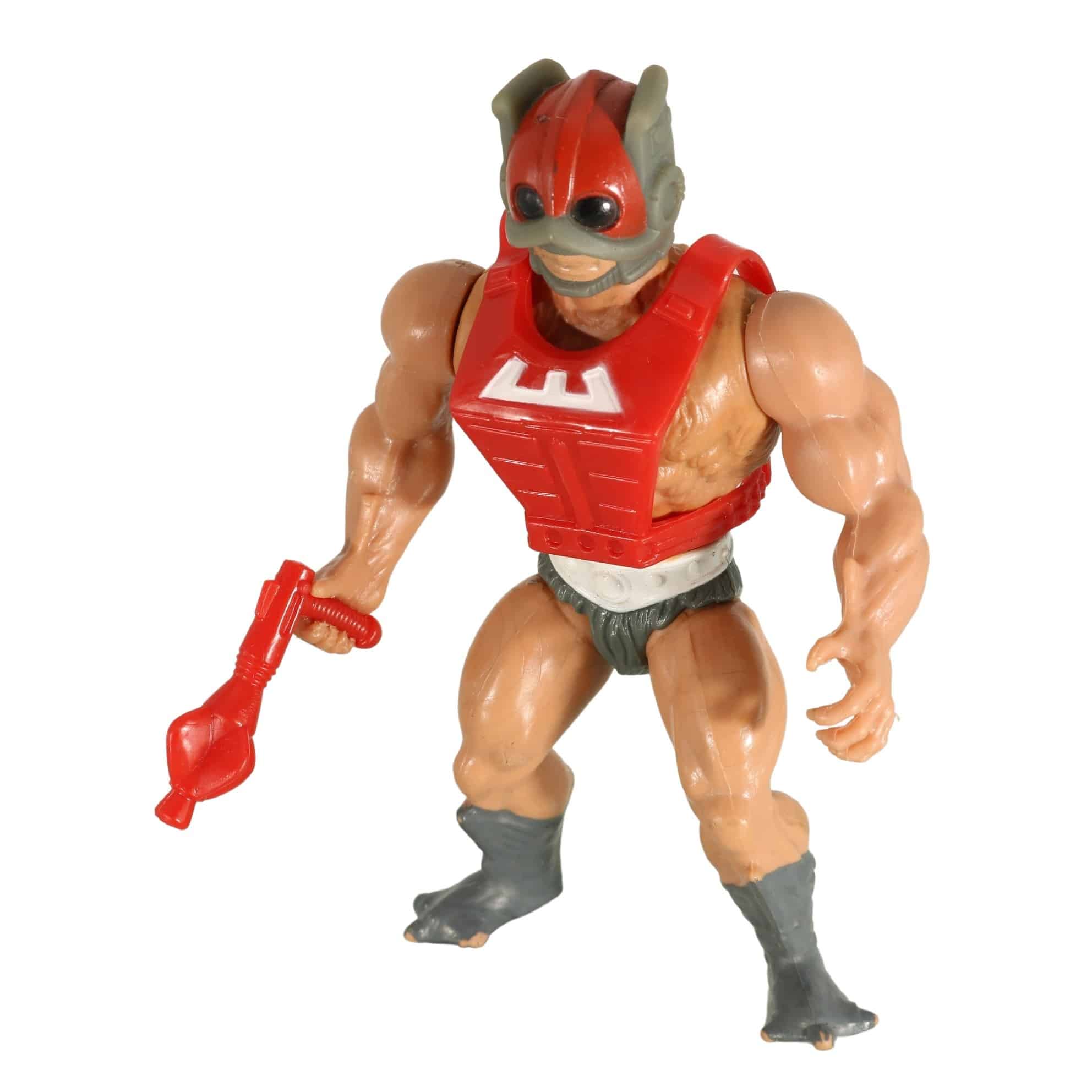 Zodac is a mystery – both to MOTU fans and the other characters in the franchise. He was one of Robert Sweet’s earliest creations, and he came with the tagline ‘Evil Cosmic Enforcer’. But he never appeared in the original minicomics, and he appears only fleetingly in the 80s cartoon series. In later books and comic series, he is portrayed variously as a neutral party, a hero and a villain.

This ambiguity doesn’t harm the toy’s retail value in the slightest. In fact, Zodac is one of the most valuable vintage He-Man toys on the market today. In April 2022, he sold for $990 on eBay, in brand-new condition. 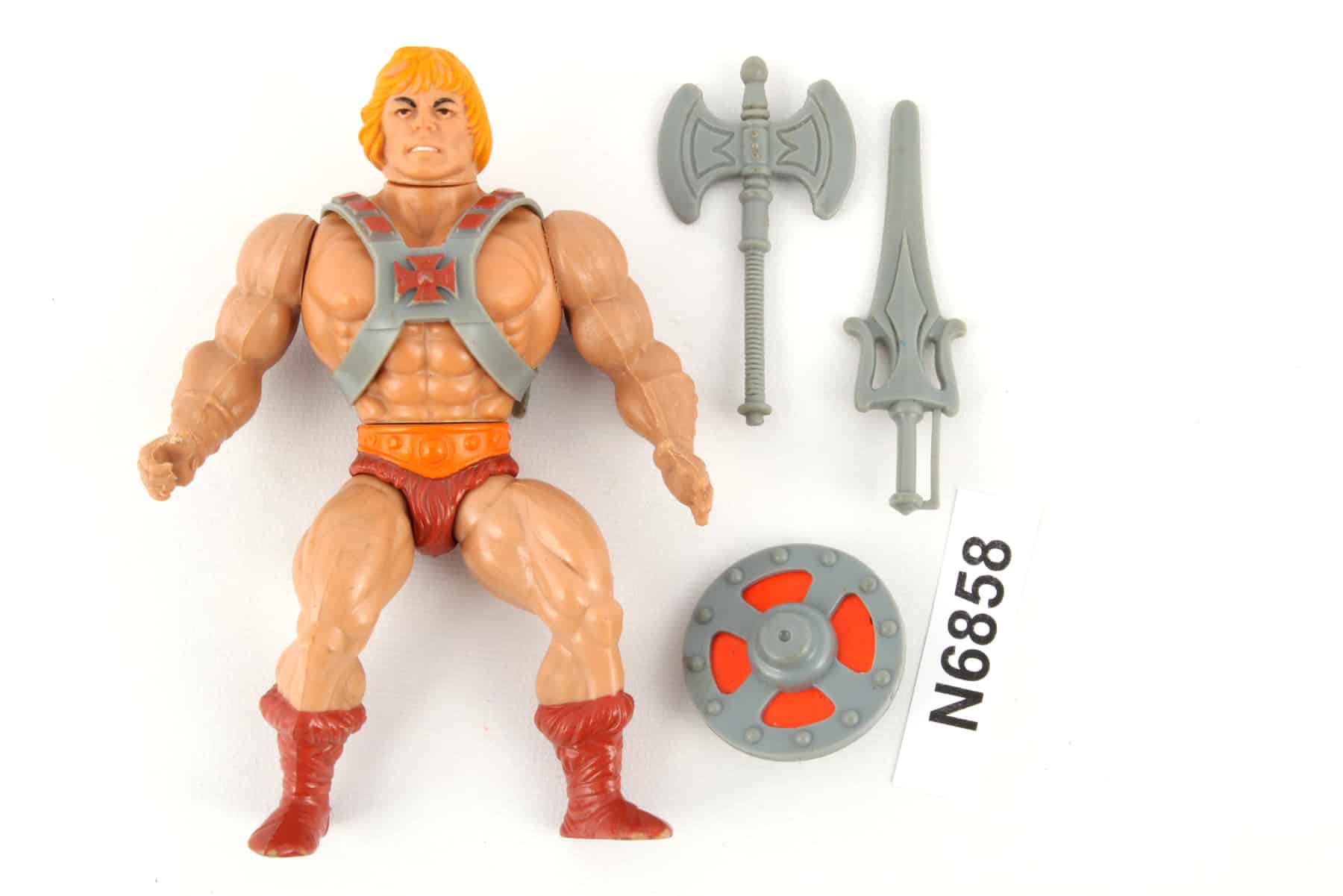 The very first prototype for He-Man was a Big Jim figure, covered in clay and designed to look like a ‘barbarian’. The very earliest He-Man toys reached stores in 1981, making these action figures some of the most coveted models.

In May 2022, one such He-Man attracted 67 bids on eBay.com and eventually sold for $4,561. This toy was particularly valuable because it was never opened. The surrounding package alone betrayed the passage of time, according to the seller: “Blister has slightly yellowed, card has vein on back going across the card where blister is sealed, corners are soft, bottom corners slightly curved up”.