If you grew up in Britain in the 90s, you may have paid a visit or two to the likes of Thorpe Park, Alton Towers or Chessington World of Adventures. But were you lucky enough to set foot in a theme park that was based on (according to one poll) “the best Saturday night TV show of all time”?

Running from 1991 to 2000, Noel’s House Party was hosted by Noel Edmonds, but the breakout star was a character in a pink rubber suit dotted with yellow spots, whose vocabulary was limited to his own name: “Blobby!”

Though hated by many adults, Mr Blobby was loved by children, and soon – to capitalise on the popularity of a new Saturday evening superstar – he was even to get his own chain of theme parks.

The first Noel Edmonds’ World of Crinkley Bottom (named after the fictitious village where Noel’s House Party was set) opened in Cricket St. Thomas, Somerset in early 1994, on the grounds of what had been a peaceful, grade one listed wildlife park.

It probably won’t come as too great a surprise that not everyone was happy to see a garish tourist attraction in what had been a tranquil and largely unspoiled area. It wasn’t simply a question of taste, however: LancLive reports that local residents had a number of genuine concerns about the hastily-constructed theme park.

It is alleged that Edmonds’ production company Unique and the builders hired to build the park that soon became known as Blobbyland had not obtained full planning permission before beginning construction. Once the park was open, there were also concerns that the elephants in the park were not being properly looked after.

Despite these complaints, Blobbyland proved hugely popular, attracting a reported 650,000 visitors in its first season, which convinced Edmonds and company that they were on to a winner.

A second Blobbyland was soon planned in the Lancashire seaside town of Morecambe. The local council, enthused at the prospect of a major tourist attraction, invested £300,000 in the project.

Work was quickly underway to open to the public in July 1994, mere months after the Cricket St. Thomas park opened.

In this case, however, it wasn’t just local residents who were left unhappy by Blobbyland, but also Lancashire Council.

Visitor numbers were nowhere near what was anticipated: Councillor Shirley Burns reflects, “there was no way people were going to queue to see a few small houses and a man in a Mr Blobby suit, they would only go if Noel Edmonds himself was going to be there every day.”

Visitors to the park were unimpressed, complaining it was overpriced and offered little entertainment value, particularly for the kids it was most heavily targeted at.

There were also widespread complaints when the park was granted an alcohol licence, residents fearing this could lead to loutish behaviour.

In the end, the Morecambe Blobbyland was open for a mere 13 weeks before councillors voted to shut it down. Lancashire Council proceeded to take Edmonds’ company to court, claiming they had been misled into investing in the park.

Ultimately the court ruled in Edmonds’ favour, and the ensuing legal fees plunged Lancashire council around £2 million into debt. Yet even though Edmonds had emerged victorious, the scandal (dubbed ‘Blobbygate’) seriously tarnished his brand.

While a third Blobbyland was opened in Lowestoft, Suffolk in 1996, this too faced trouble and would fold in just one year. In the meantime, the Cricket St. Thomas park was rebranded with Noddy as its mascot, before quietly closing its doors in 1998.

In the years that followed, Noel Edmonds’ brief stint as a theme park magnate was all but forgotten – until a group of so-called ‘urban explorers’ stumbled across the spooky, ruined remains of the Somerset park a decade later.

The photographs the explorers took of the abandoned park in Somerset, taken in 2009, show that what was once a pink and yellow paradise had become a graffiti-strewn wasteland looking more akin to something out of a terrifying Hollywood horror film.

The park once offered lavish accommodation in ‘Dunblobbin’, a pink-and-yellow-spotted building which featured a memorably impressive front door, in addition to a working doorbell that when pressed gave a familiar “blobby-blobby-blobby” cry. 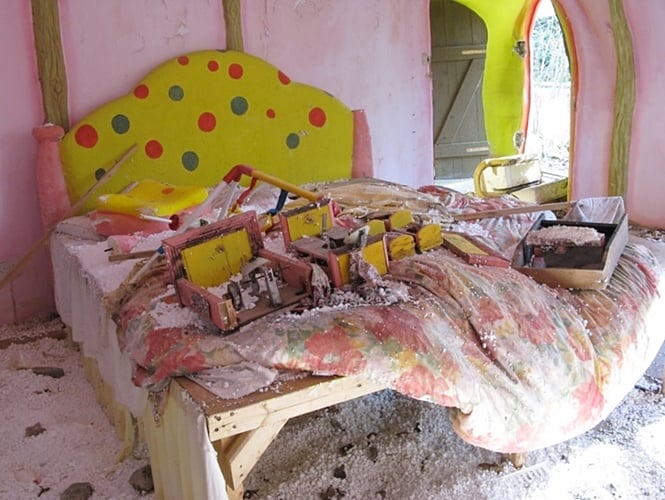 The photos reveal that what once would have been a dreamlike Mr Blobby-themed bedroom was now covered in mould and rubbish, whilst the adjacent ‘Blobby Shop’ looked more likely to contain ghouls and ghosts than Blobby-themed gifts and confectionery.

Faded maps of the park reveal that it once contained delights such as a sea lion show, a train ride, an Animals of Farthing Wood attraction and even a safari tour that promised real live deers and leopards. 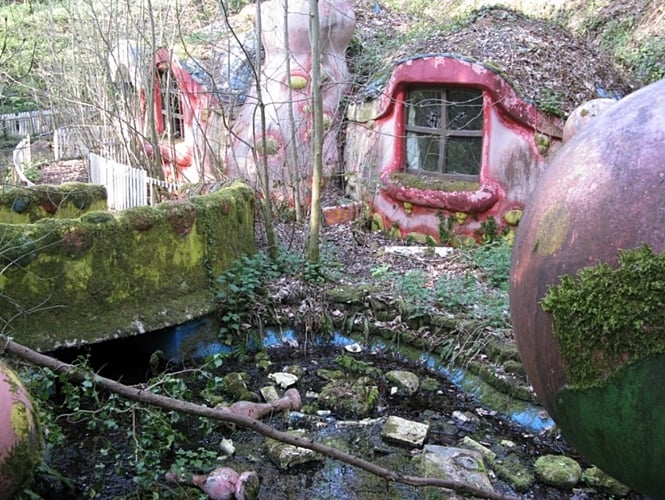 Unfortunately, by the time this discovery had been made, the only animals left were the wild woodland creatures that had long since made their home in the park’s abandoned shelters and crevices.

Looking at footage of the derelict, overgrown animal enclosures, one half expects velociraptors and/or the Blair Witch to come pouncing out at a moment’s notice.

The urban explorers were enamoured with their find, so decided to leave their mark by graffitiing a message onto one of the decaying walls which declared ‘Noel Edmonds, stop pretending Deal or No Deal is more than it is’ (in reference to the popular game show that Edmonds hosted between 2005 and 2016).

One might expect that the whole Blobbyland experience would have left Noel Edmonds a little more level-headed when it comes to business ventures, but perhaps not: in 2014, Edmonds declared he intended to buy the BBC.

As for Somerset’s Blobbyland: the park was eventually demolished in 2014, but not before the photos encouraged a number of nostalgic thrill-seekers to make their own way to the deserted remnants of one of our childhood’s most treasured pink and yellow memories. Farewell Mr Blobby, may you rest in blobby peace.